NORTH MUSKEGON – Coming into this week’s conference matchup against Whitehall, the North Muskegon football team had its share of doubters, because they had lost to the Vikings for five straight years.

But after an old school ground-and-pound type of game on Friday, the Norse came out on top 17-7, and head coach Larry

Witham said the win took his team to a different level.

“Whitehall’s a heck of a football team,” said Witham, whose team is now 4-2 overall and 3-2 in the West Michigan Conferrence. “But our kids were able to come out and match everything punch for punch with them. Bryan Rypstra, our defensive coordinator, had an excellent game plan to stop them, and holding that offense to seven points is a huge achievement.”

The Norse took their time on the first possession of the game, taking more than half of the first quarter before quarterback John Hayhurst found Eric Rypstra in the back of the end zone for a three-yard touchdown pass, giving the home team an early 7-0 lead.

Witham said having a kid like Hayhurst under center, it makes it tough for opposing defenses to prepare for their offensive attack. 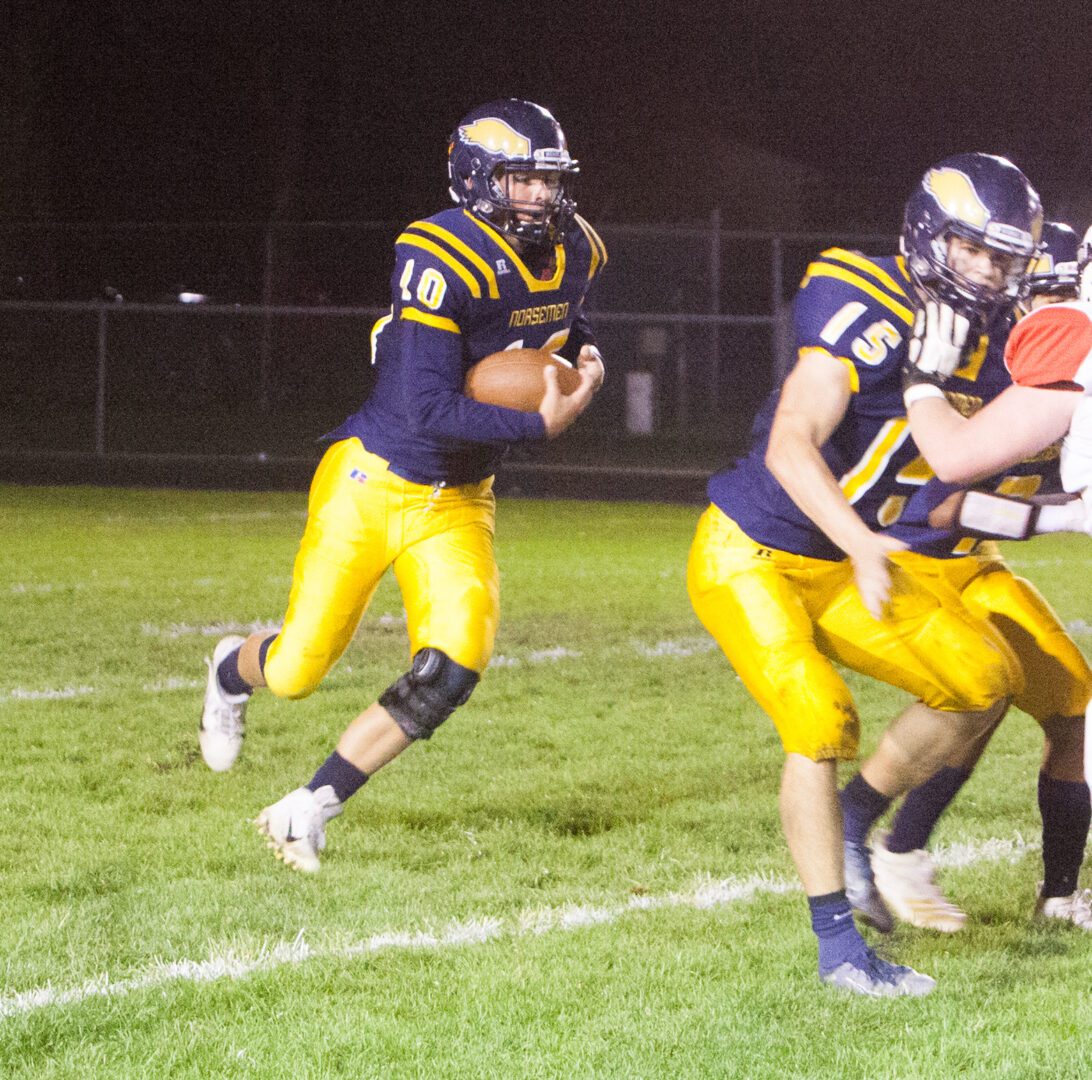 “John’s a smart kid, on and off the field,” he said. “He’s a real student of the game. You add that to his ability to run and pass the ball, it’s a nice weapon to have on that side of the ball.”

Near the end of the first quarter, as the Norse were set to punt from their own 40-yard line, Viking freshman Graycen Shepherd broke past the line and blocked the kick, giving Whitehall the ball at the Norse 15-yard line.

Two plays later sophomore quarterback Brodie Fogus rushed in from seven yards, and the extra point knotted the game at 7-7.

Gabe Rahrig kicked a 20-yard field goal with two minutes left in the half, giving the Norse a 10-7 lead at the break.

As the Norsemen were driving in the middle of the third, Hayhurst threw an interception to Whitehall’s Cayden Ritchie, and the Vikings were in great shape, starting a drive at the North Muskegon 47-yard line.

But two minutes later, the Vikings fumbled near the sideline and a hoard of Norsemen fell on the ball to kill the Viking momentum.

The Norsemen once again were able to milk the clock, taking their possession into the fourth quarter. With 9:50 left, Hayhurst pushed his way through the line for a one-yard touchdown run to put North Muskegon up 17-7. 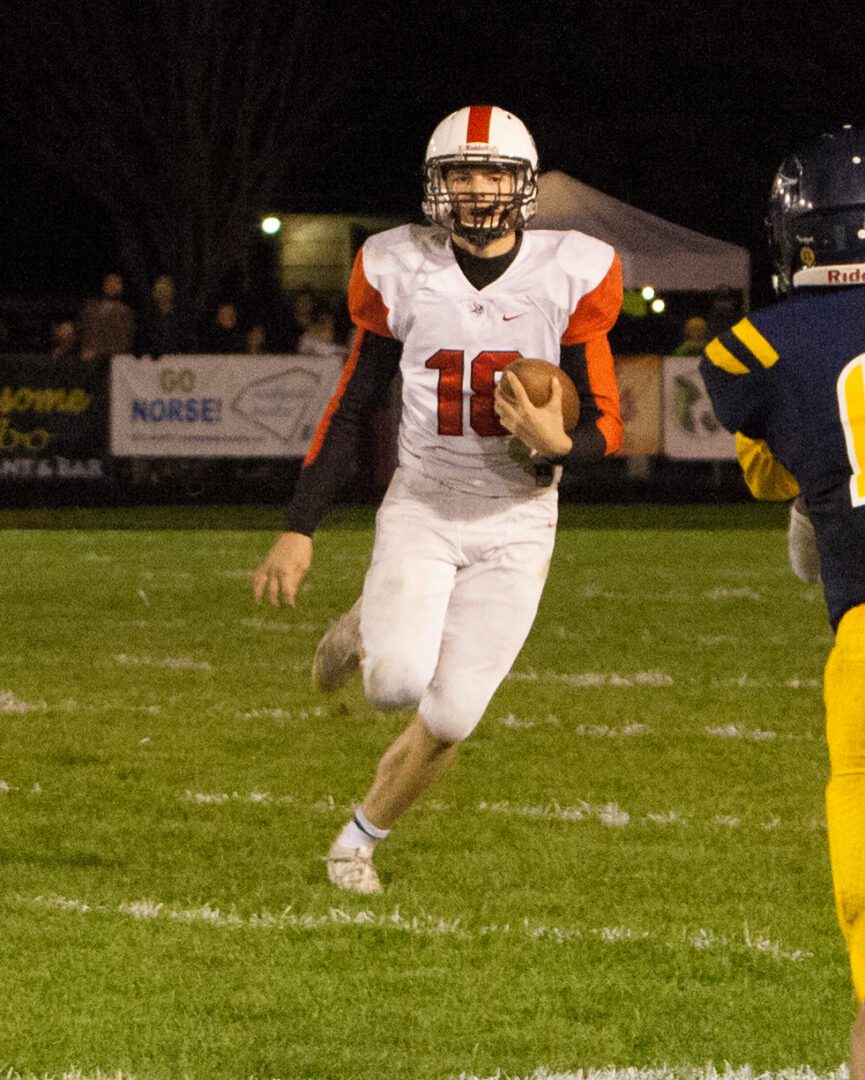 The Vikings had numerous chances in the final minutes, but lost a fumble and threw an interception, allowing North Muskegon to seal up the win.

Hayhurst was great through the air with 12 completions for 204 yards and a touchdown. Brenden Moat was the leading receiver with three catches for 104 yards while Kyler Dana added five catches for sixty yards.

Noah Stewart led the Norse defense, coming up with seven tackles including the only sack for the defense.

While the Norse celebrated a big victory, Witham knows that the schedule doesn’t get any easier from here. They will face undefeated Oakridge at home next week, a team they haven’t beaten in 25 years.

“This was a great win but we got to stay focused,” the coach said. “Hopefully we’ll be able to roll along with what we have and break down what they do, get healthy and really focus on progressing the way we have.”

Kayleb Venema led the Viking rushers with 63 yards on the ground while Fogus had 46 yards on nine carries and a touchdown.

The Vikings fall to 2-4 on the season and 2-3 in conference play.

Whitehall coach Tony Sigmon talked about coaching a younger team than in years past, with only six seniors dressed on Friday night.

“We’ve gotten bit by the injury bug this year, and we’ve had to make some emergency moves,” Sigmon said. “Whether it be at the starting spot or with depth, we’ve lost some key pieces. But the way we’ve been able to battle as a group, I couldn’t be more proud of them.” 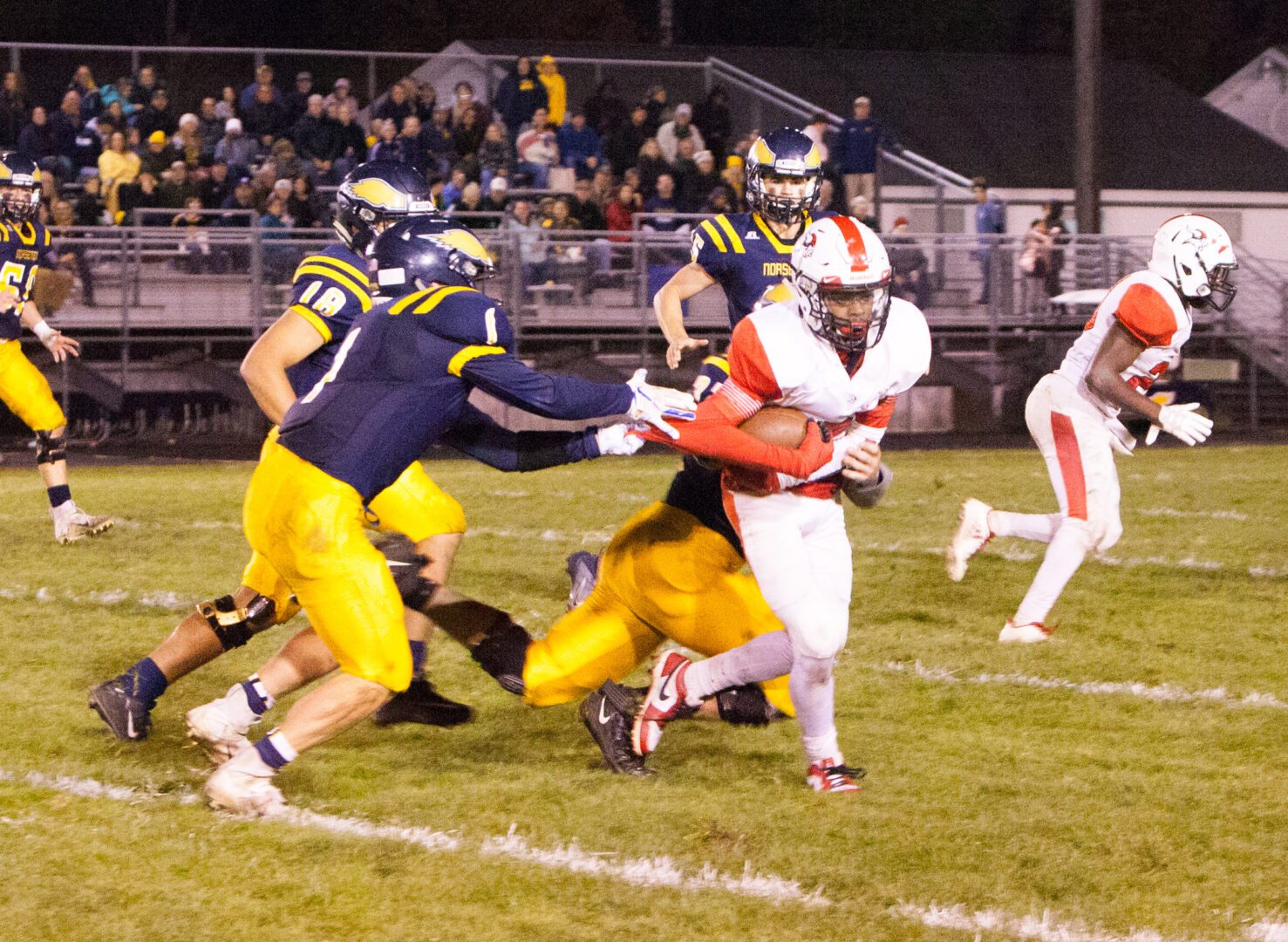 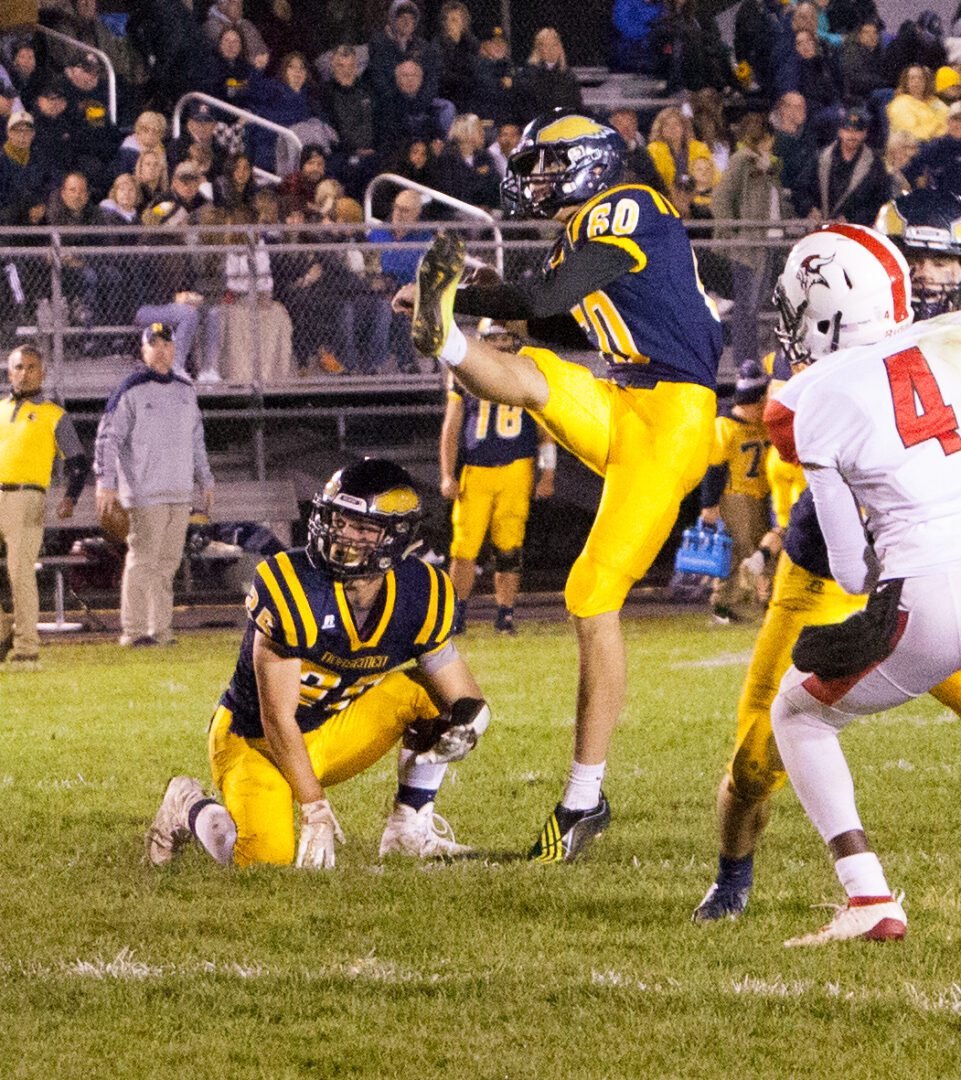 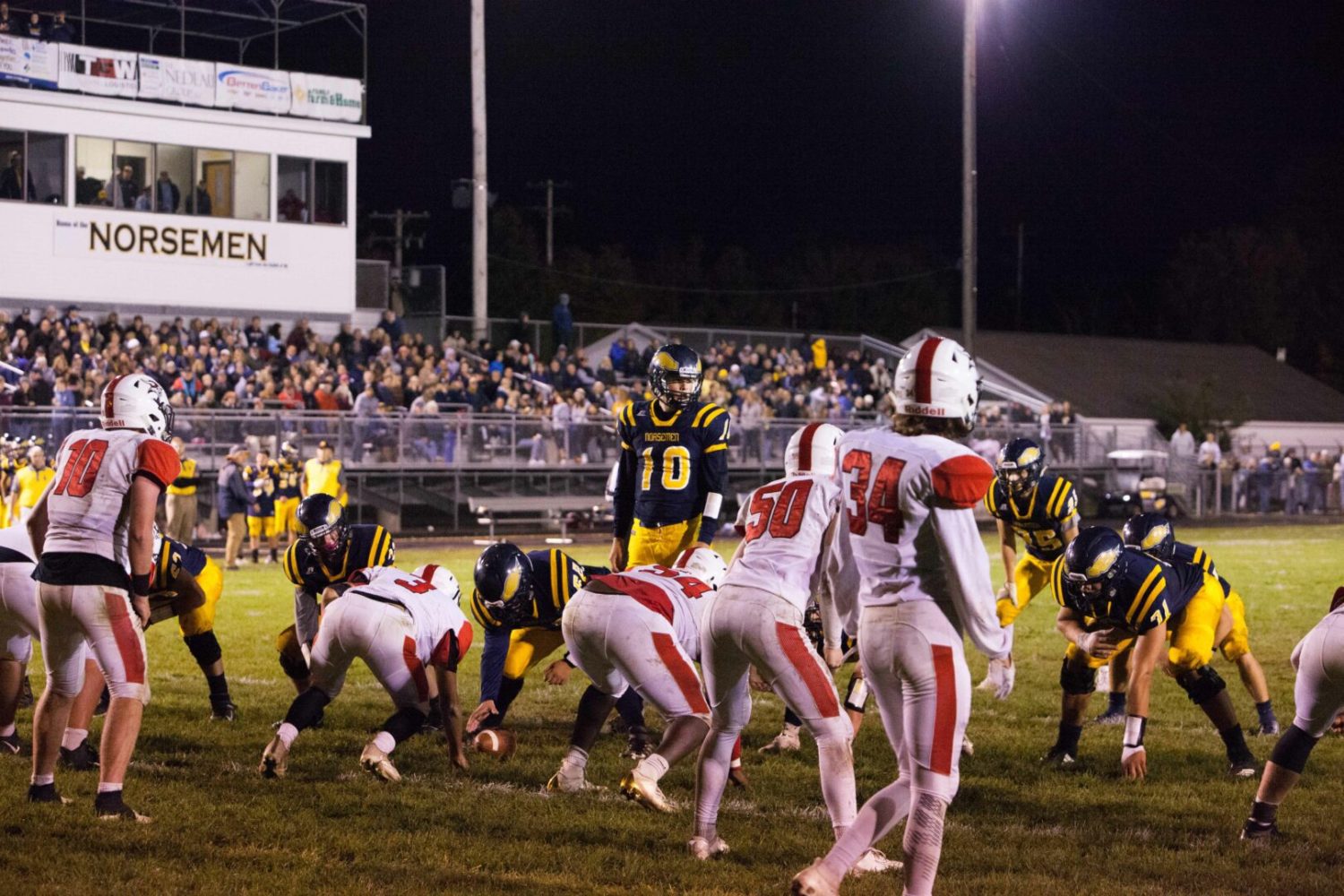 North Muskegon QB No. 10 John Hayhurst looks down the line before the play. Photo/Jason Goorman 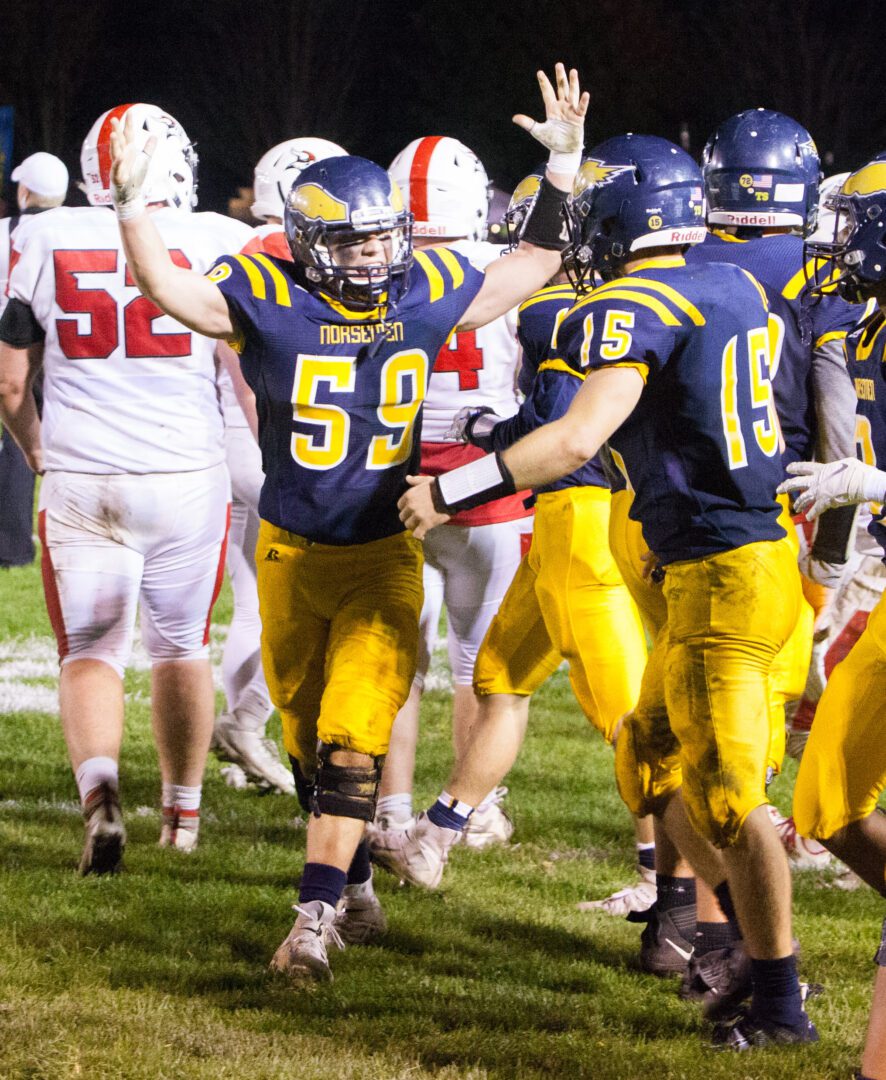 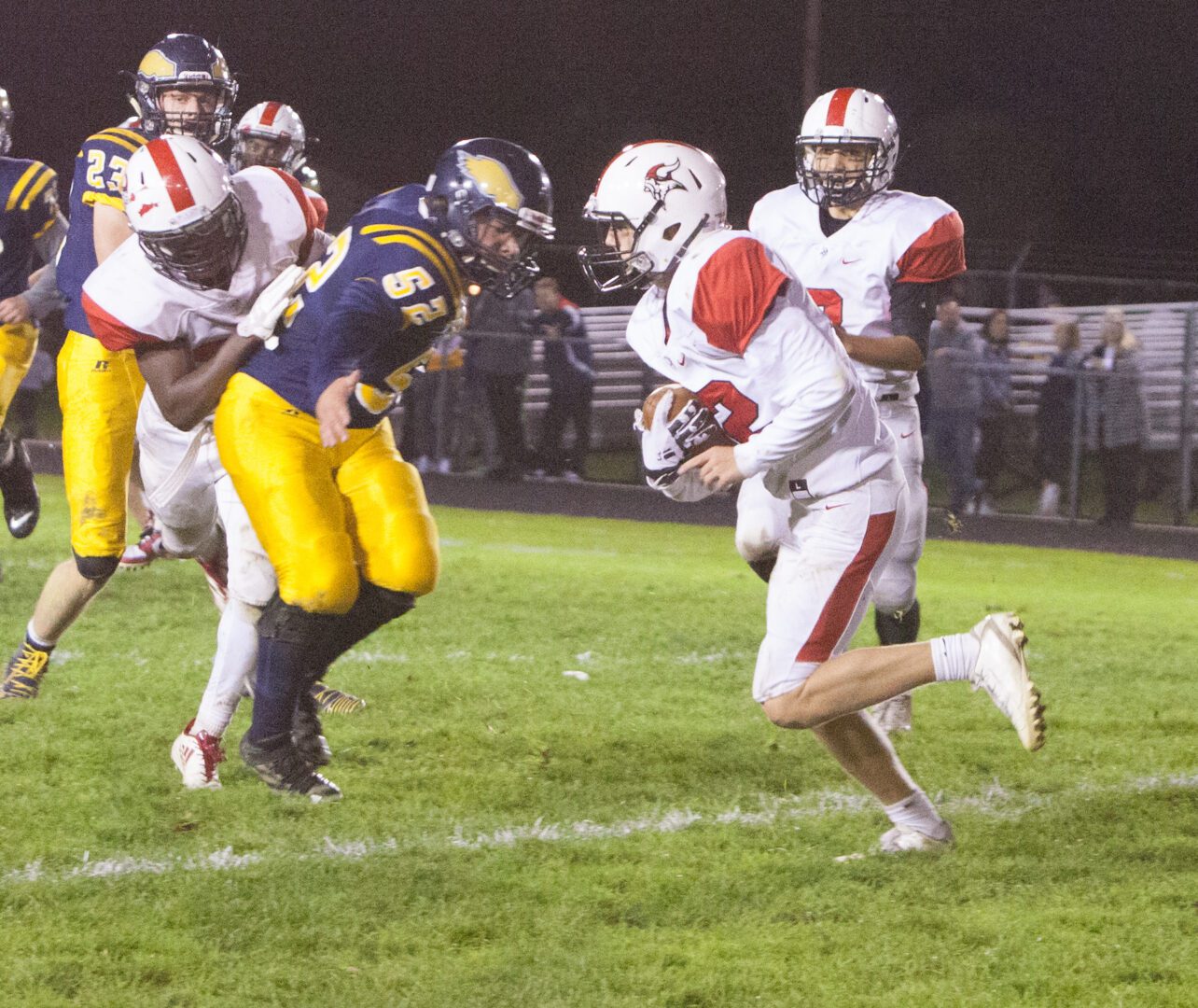 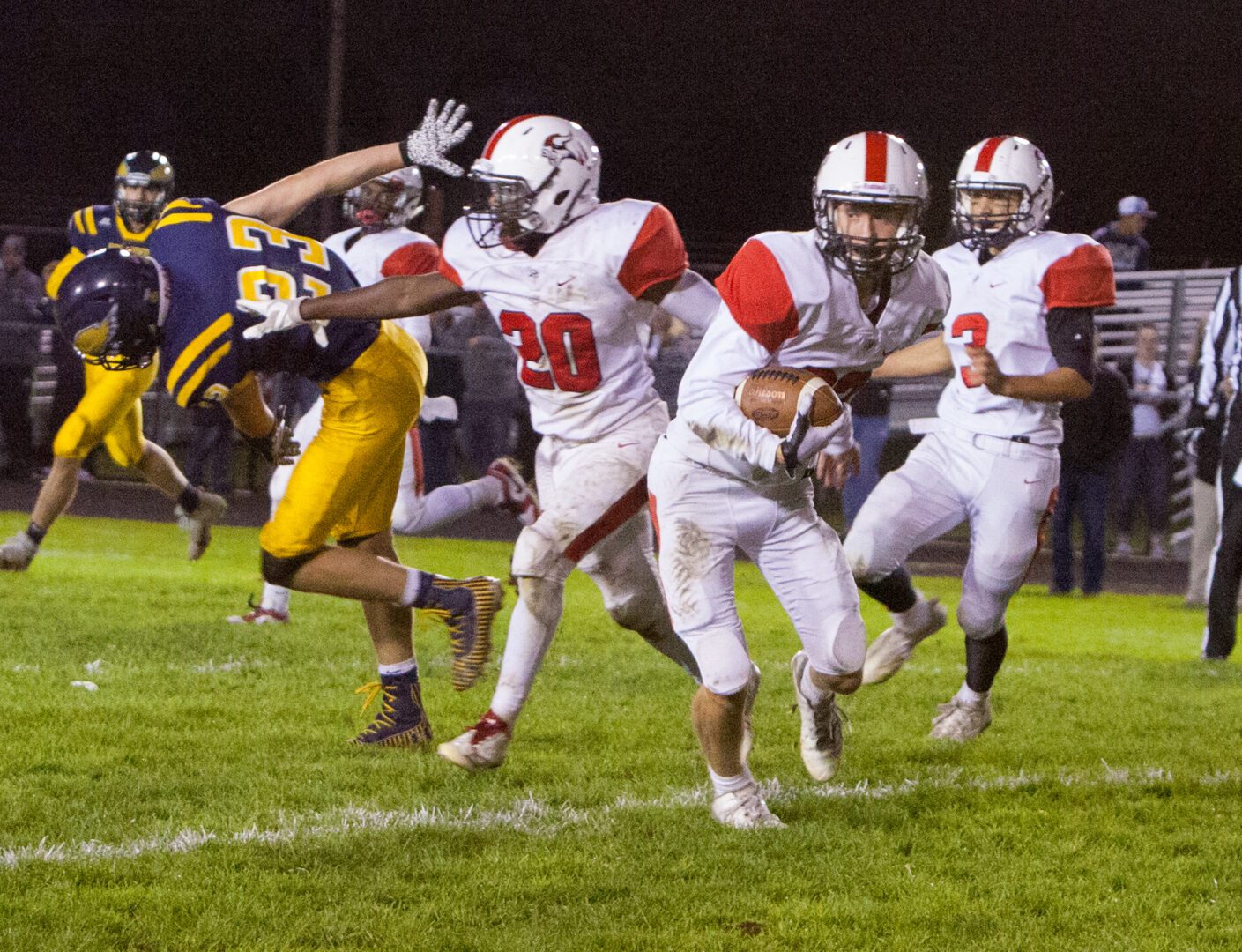 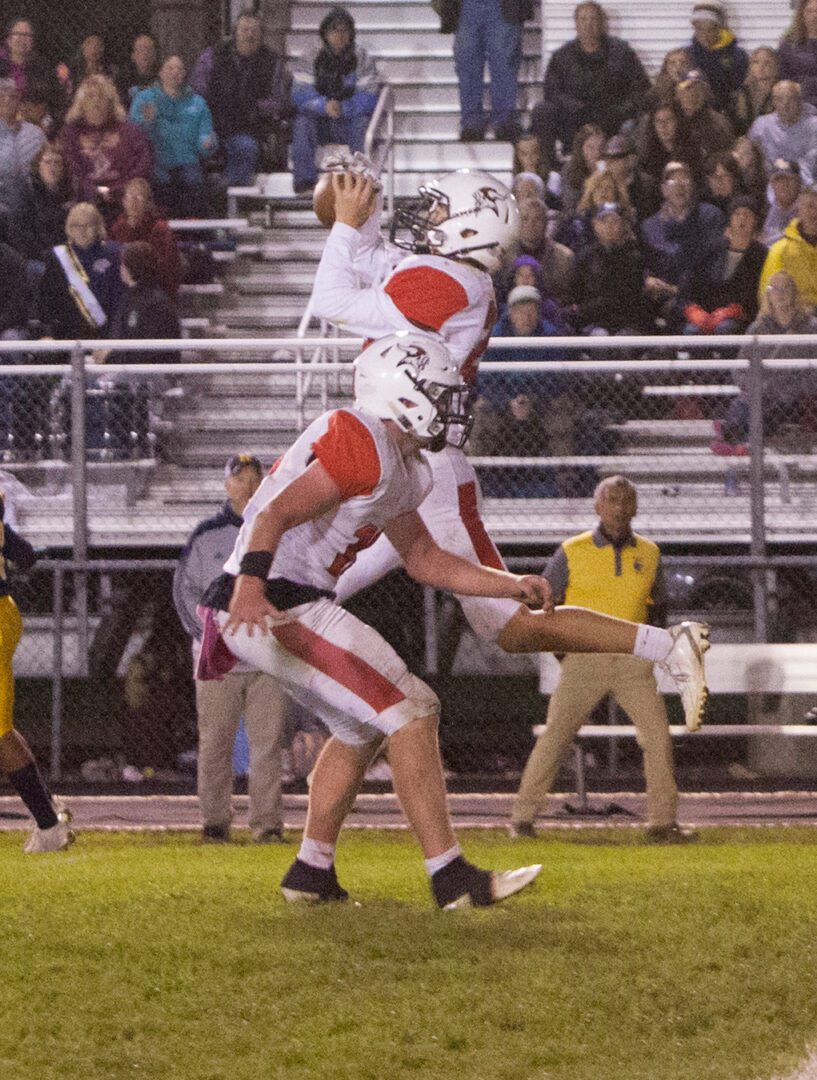 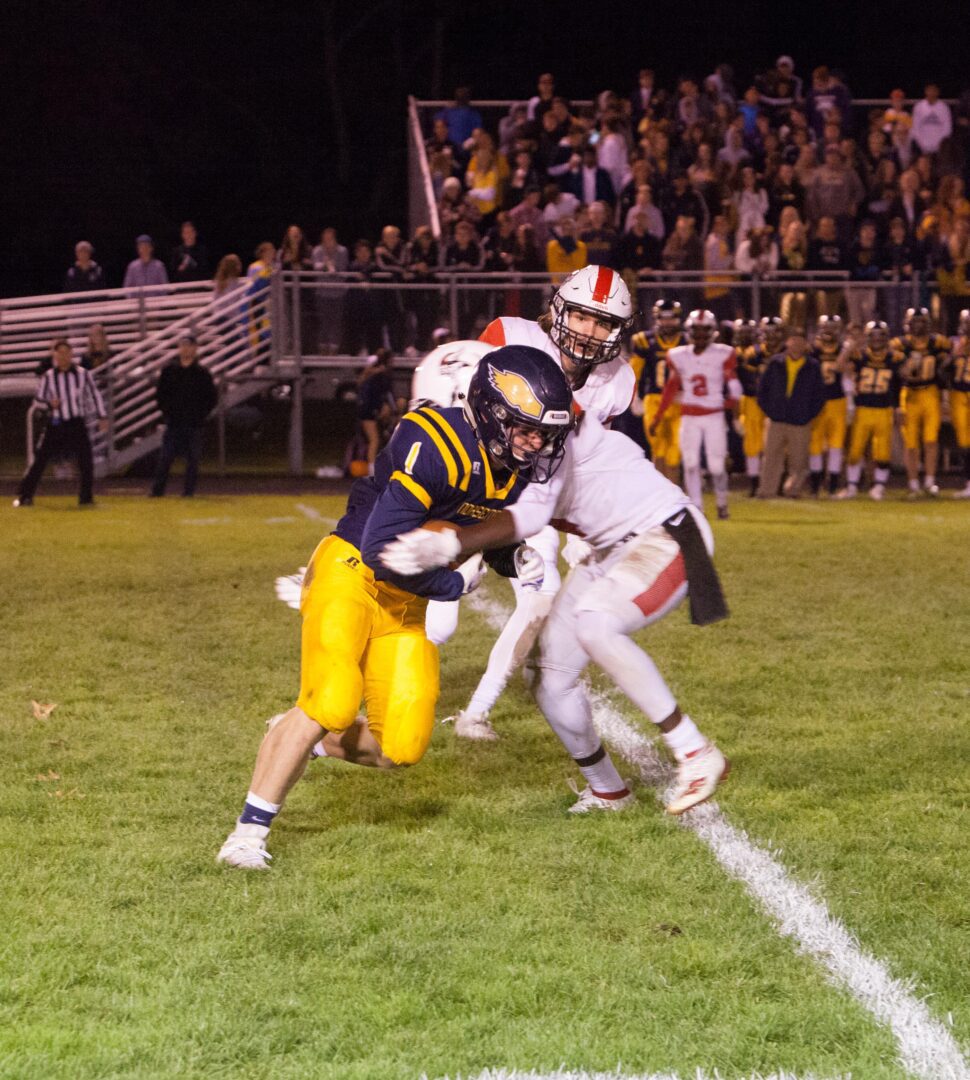 IKyler Dana on the rush for North Muskegon. Photo/Jason Goorman 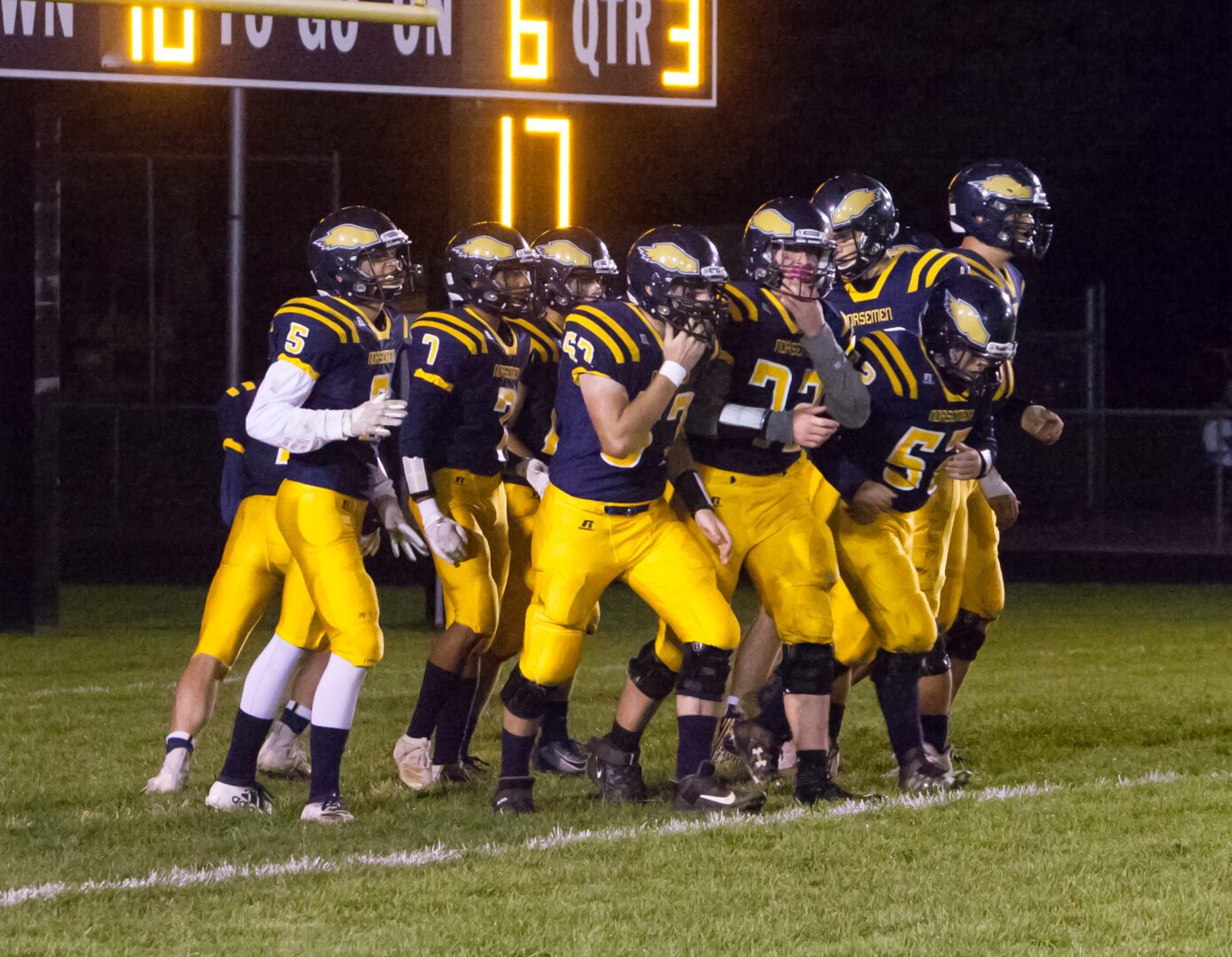 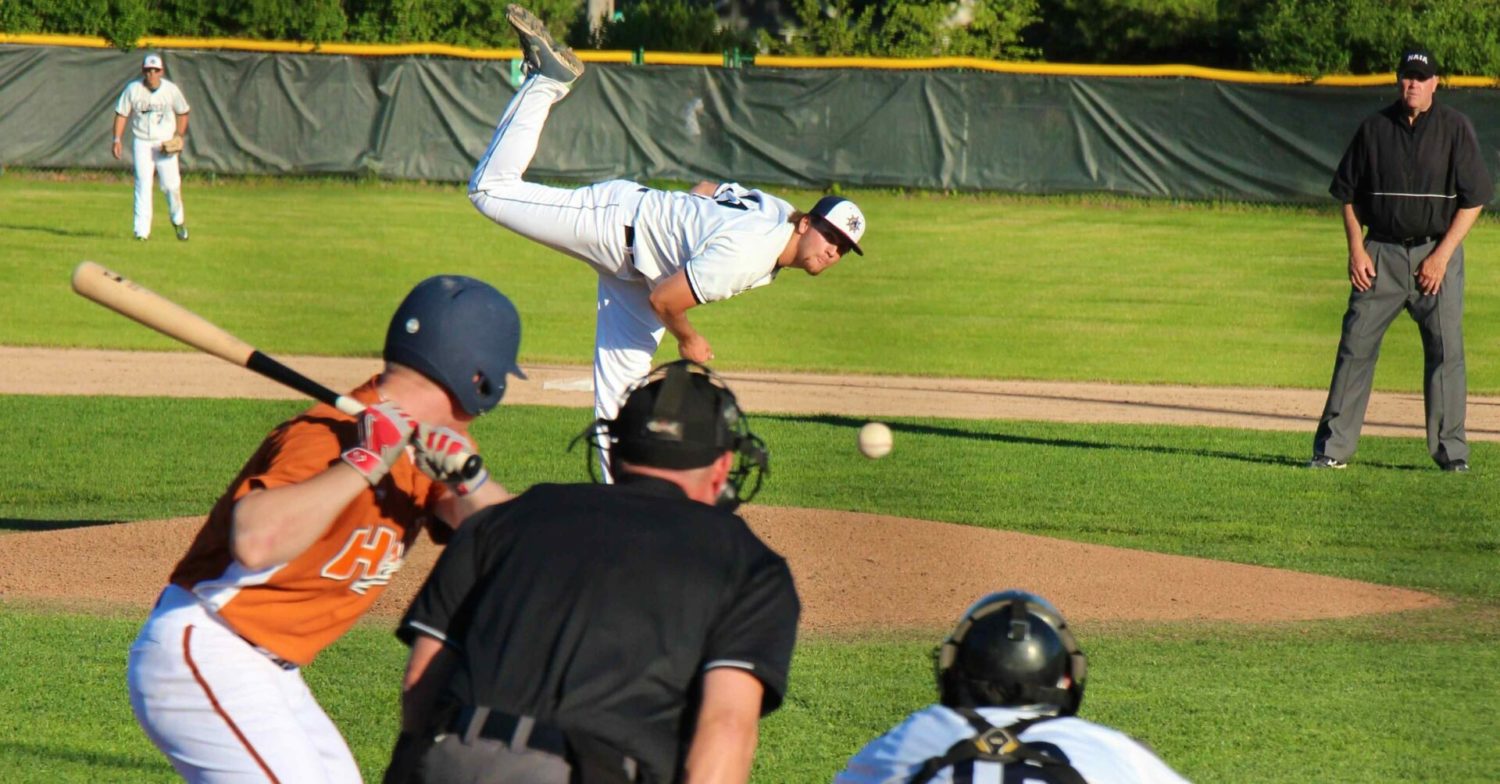 Lawson pitches a gem, Clippers’ bats boom in a 10-1 victory over the Holland Millers