NORTH MUSKEGON – The North Muskegon football team is 4-2 on the season, and within striking distance of accomplishing something it hasn’t done since 1988 – qualify for the state playoffs for three years in a

That would actually be quite an accomplishment, considering the Norse play in the very challenging West Michigan Conference, against perennial powerhouses like Oakridge and Montague.

While North Muskegon certainly has a lot to be proud of,  you would never know it by the team’s daily and weekly approach. 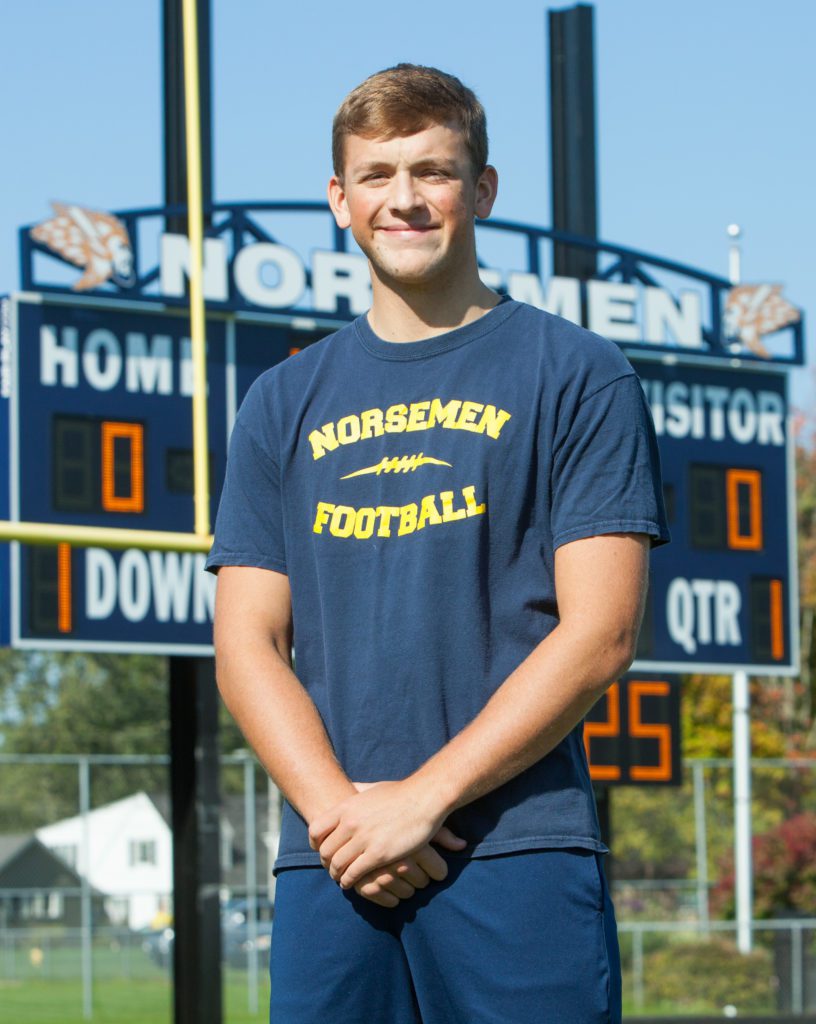 They coaches and players know they haven’t reached their goal yet, so it’s business as usual. That’s probably smart because the Norse need two wins in their three remaining games to guarantee a playoff spot, and two are against Oakridge and Orchard View, which are both undefeated at the moment.

“It’s certainly a feather in our cap,” said North Muskegon head coach Larry Witham about having the chance to make the postseason again. “It’s important to our kids, the staff and the community. It’s important really to anyone who surrounds North Muskegon football. Other than winning conference, that’s one of our goals. But we’re not looking that far ahead yet, we’re taking it one game at a time.”

That message was echoed by senior quarterback

“Honestly we haven’t talked a lot about it,” said Hayhurst, who completed 12 passes for 204 yards and a touchdown in Friday’s exciting 17-7 victory over Whitehall. “It’s on the minds of everyone, but we try to keep a game-to-game approach. We know what’s at stake and we’re trying to make a playoff push.” 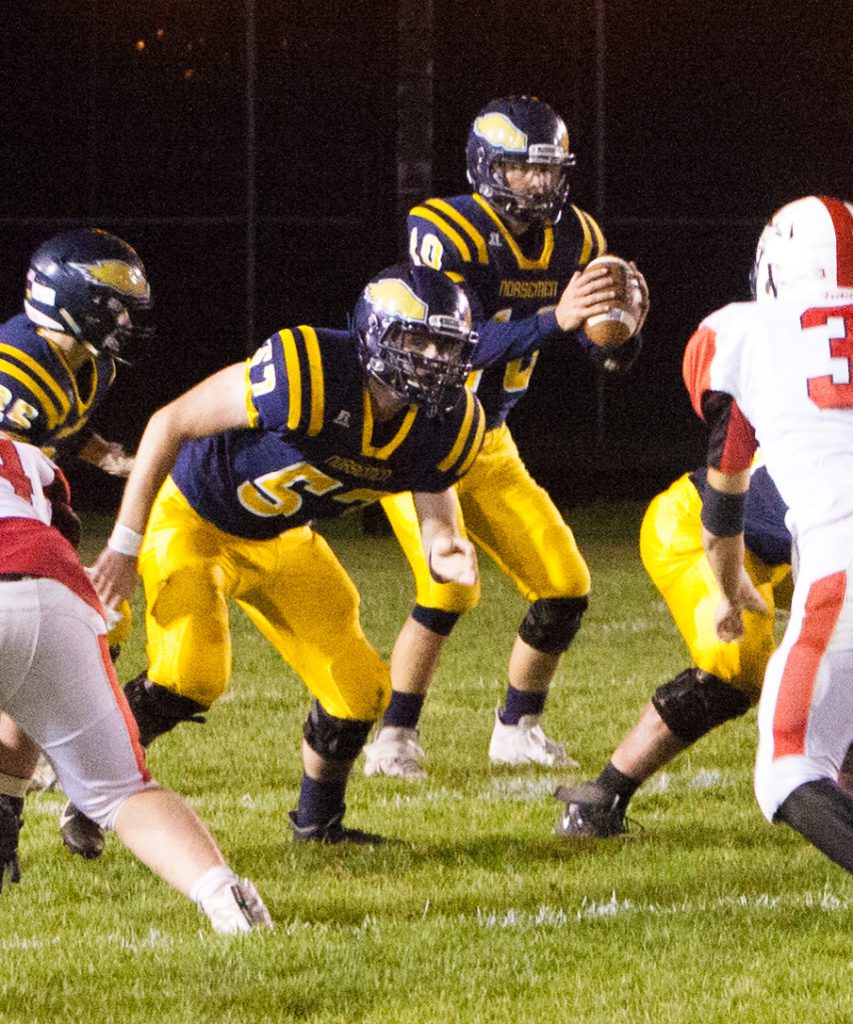 North Muskegon QB John Hayhurst drops back into the pocket after taking the snap. Photo/Jason Goorman

If the Norse do make the playoffs, they’ll likely be a tough team to beat in Division 7, where they would be playing schools more their own size. Their only losses have come against Montague and Ravenna, two respected powerhouses from higher divisions.

The Norse lost those two games by a combined five points.

“I think we take experience from those games,” Hayhurst said.  “Those are tough games with plays going back and forth, and it shows how one play can make the difference. We hung with them and even though we came up just short, it really helped us in the bigger picture.”

Just how much those narrow losses conditioned the Norse will be on display Friday night, when they host 6-0 Oakridge in a very big conference game.

“It’s huge,” said Hayhurst, who’s in his first year as the varsity quarterback after playing H-back as a junior and being the JV quarterback the two prior seasons. “I think the conference is one of the best in the area, and even in the state for small schools. You’re competing every week and you have to be on your ‘A’ game.”

If the Norse find a way to win on Friday – or in a challenging Week 9 encounter against Orchard View – it will likely have a lot to do with Hayhurst and the explosive offense, which is averaging 35.8 points per game this season. 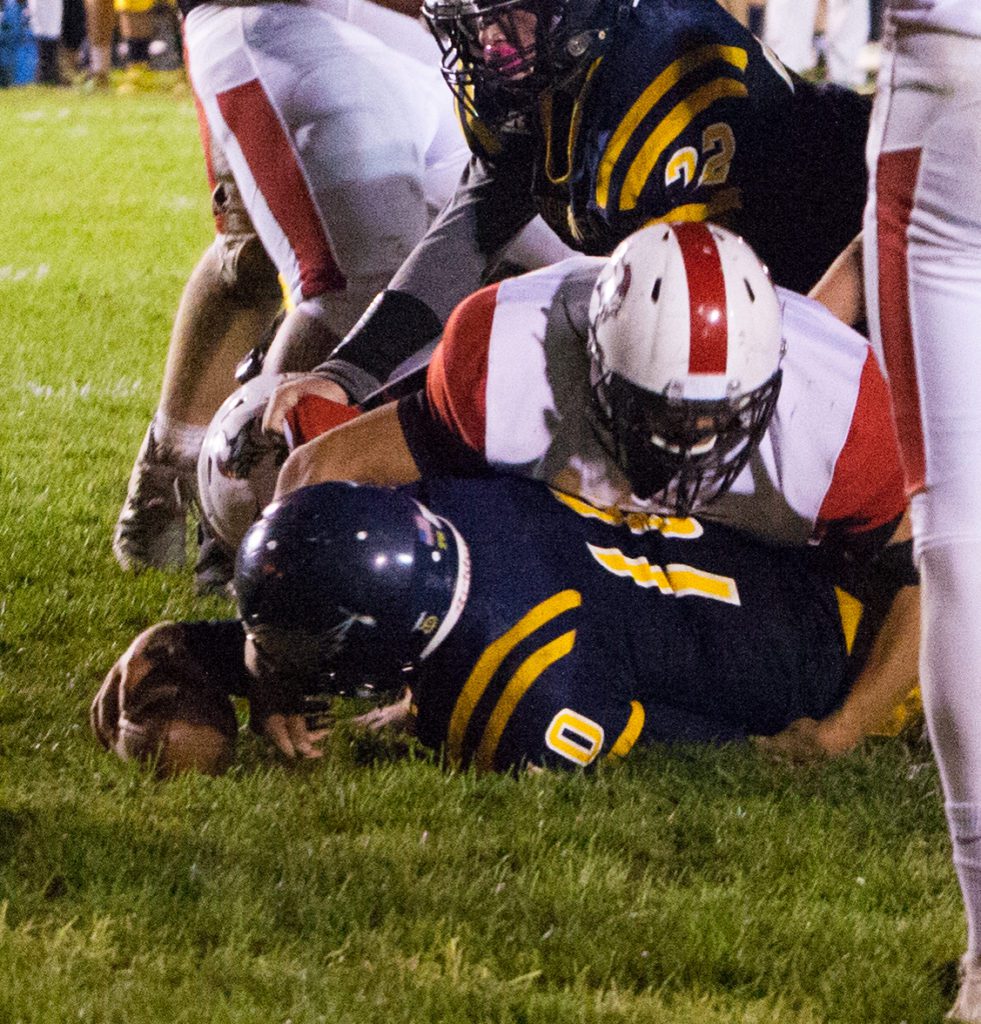 John Hayhurst finds himself at the bottom of the pile after scoring for North Muskegon against Whitehall on October 5. Photo/Jason Goorman

Directing the attack is Hayhurst, who has done most of his damage through the air, completing 36 of 61 passes for 593 yards and five touchdowns so far this season. He also has 155 yards rushing.

Stats don’t tell the whole story about the senior signal-caller.

“John is a great strategist,” Witham said. “He’s a student of the game. He watches a ton of film on our opponents and really understands what he’ll see every Friday night. He’s a very accurate passer who doesn’t make mental mistakes. He can also be an effective runner, which adds another dimension to our offense.”

Hayhurst understands he plays a very important role, but also knows he leads an offense with numerous playmakers.

“We preach about how it’s not a one-man show at any position,” Hayhurst said. “We have depth and it’s huge. It’s tough for defenses to get ready for us on a weekly basis.”

Whether Hayhurst helps lead the Norse to postseason play or not, it’s obvious what the approach will be on every Friday night, regardless of the opponent.

“We take games one at a time, and next up is Oakridge,” he said.