DETROIT – Detroit’s Ford Field has simply not been a hospitable place for the Muskegon Big Reds.

The Big Reds have advanced to the state football finals at the home of the Detroit Lions seven times in the last eight seasons, including the last four years in a row.

They have frequently come into the finals with a perfect record and a string of blowout victories, like they did in both 2018 and this year.

But getting to the big game and winning it are two very different things, and nobody knows that better than Muskegon Coach Shane Fairfield, whose record in the finals fell to 1-6 following a stunning 30-7 loss to River Rouge in the Division 3 state championship game on Saturday night. 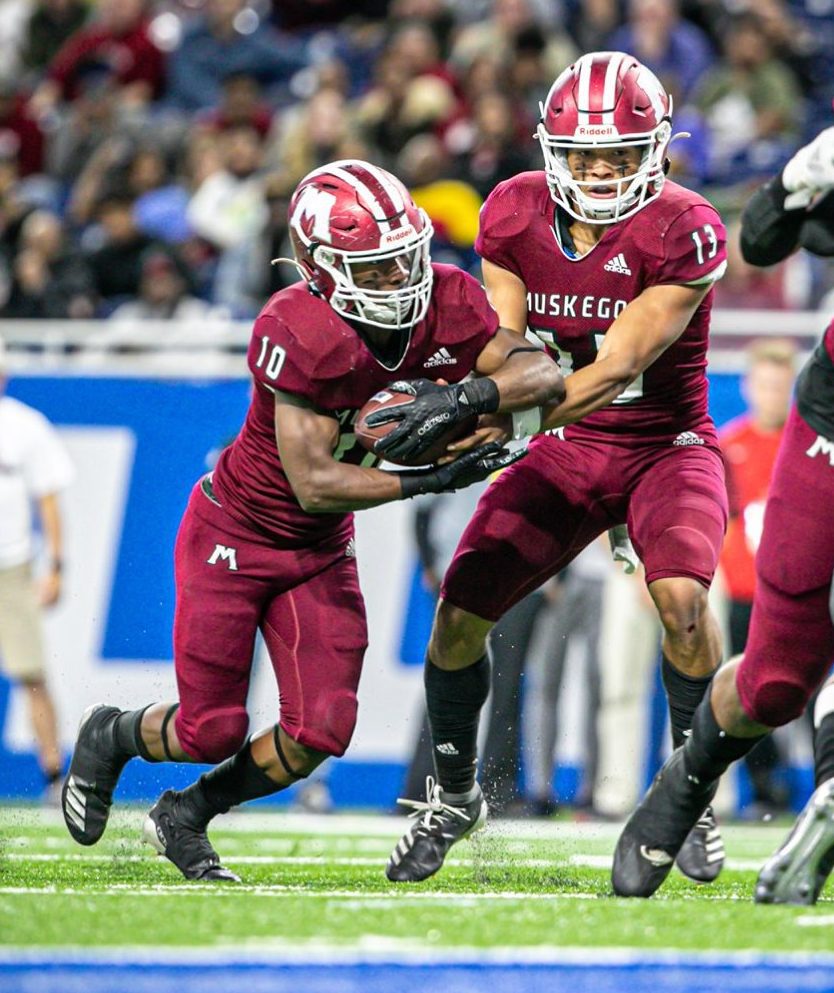 The Big Reds, who were ranked No. 1 in the state all season, finished the season with a 13-1 record. Their losing streak in the finals was extended to two straight years, following their 2018 loss to Detroit Martin Luther King.

“It’s a conversation I’m having that a lot of coaches aren’t,” Fairfield said about his record in the finals. “I’m not going to apologize for that. I want to win this game more than anybody. But I will not say I’m sorry for losing, for being here. There’s a lot of coaches that don’t feel my frustrations and have not been here seven out of eight years. And, if you know me well enough, we’ll be back here again next year.

“They’re very hard to win – apparently really hard if I’m the head coach. These are our guys. This is our team. This is who we got here with. I couldn’t be any more proud of them. They played their hearts out. (River Rouge) is a really good football team. They deserved it.”

Of course the key to stopping the Big Reds is containing star quarterback Cameron Martinez, something no opposing defense was able to do this season – until Saturday.

The senior Ohio State University commit came into the game averaging 155 rushing yards and nearly three touchdowns per game. The River Rouge defense held him to a net gain of 108 yards rushing (including 41 yards of losses), for an average of 3.2 yards per carry and just one touchdown.

Martinez also came in averaging 97 passing yards per game, but was 0-for-5 through the air on Saturday. 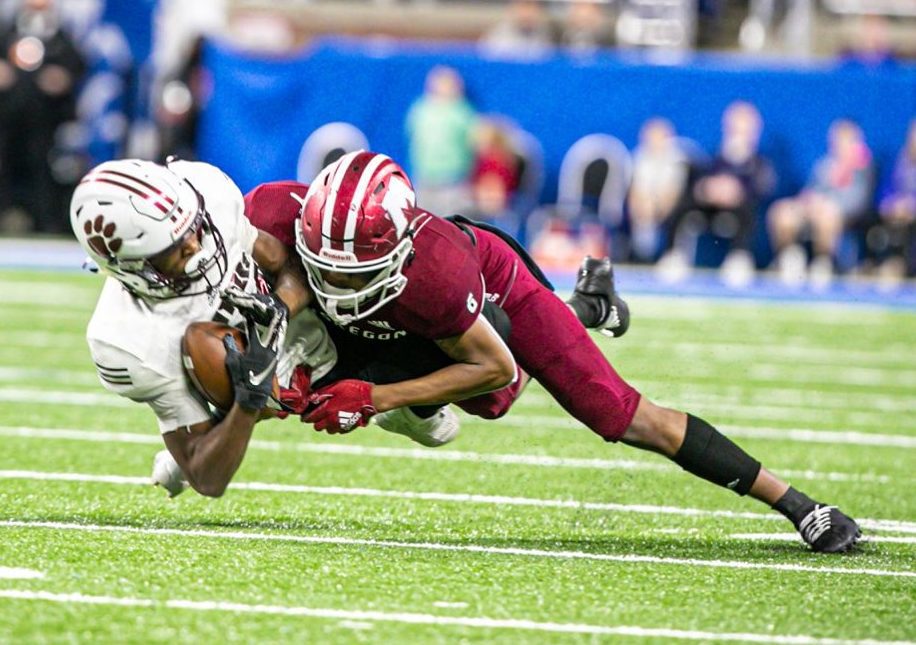 “They just played hard and flew to the ball and never stopped and kept playing hard the whole game,” Martinez said. “They were the better team today. I didn’t expect this to happen, but I give them credit, they are a great football team.”

Martinez was a state champion as a freshman when he was the starting quarterback for Muskegon Catholic Central. But he spent his last two seasons at Muskegon and came up one win short each time.

“I am very blessed to be in the position that I’ve been in,” he said. “I have done a lot of things that I never thought I would accomplish. Unfortunately we couldn’t come out on top.

“It’s crazy to look back and think that it has already been four years, and I have a lot to be grateful for, but it just sucks we couldn’t go out on top.”

With Martinez neutralized, Muskegon’s offense loses a lot. The Big Reds came into the game averaging 49 points per game, and fell well short of that in the biggest contest of the season. They also came in averaging 439 yards per game in total offense, and only gained 180 on Saturday. 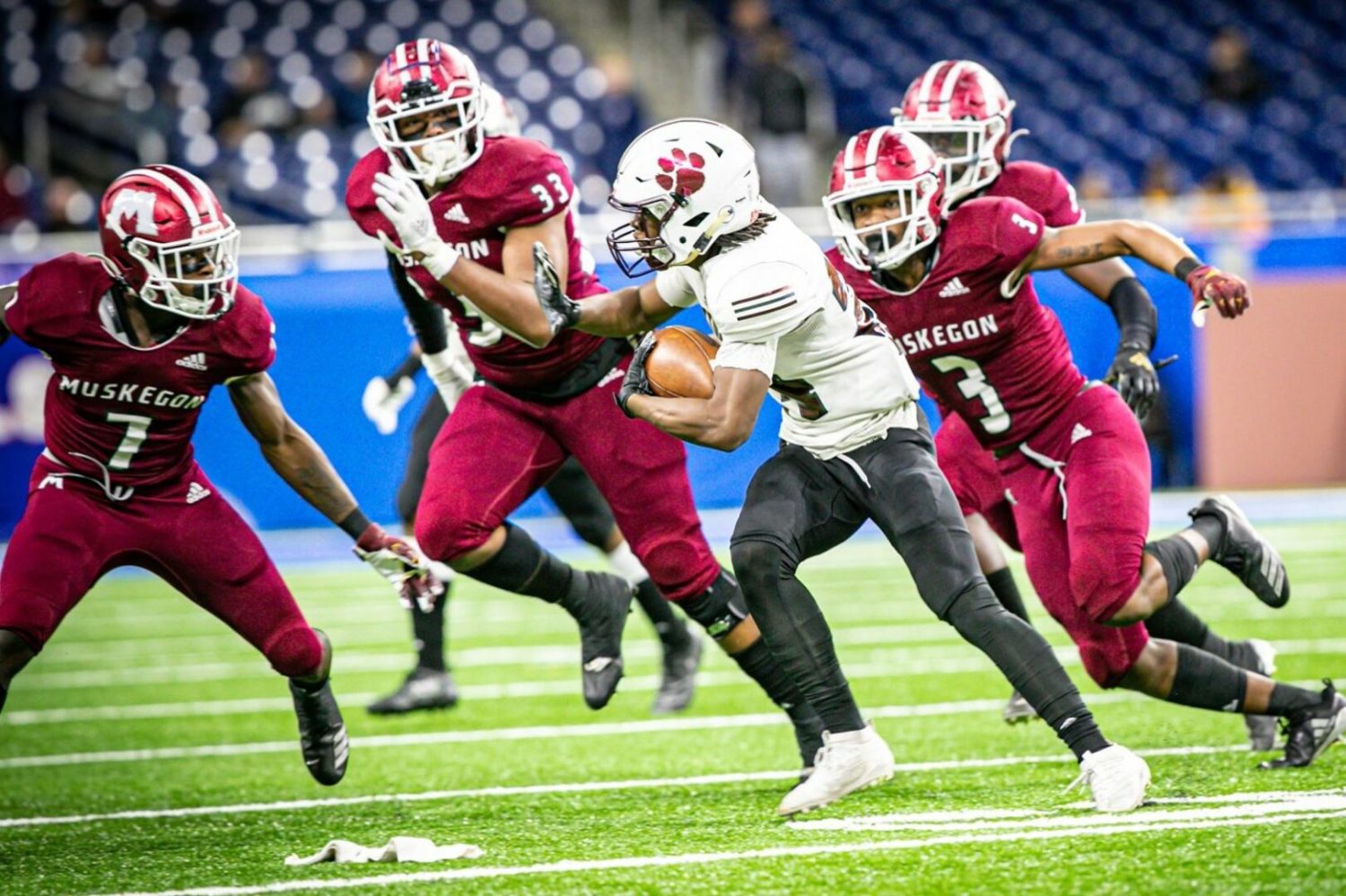 “Just fast, fast, fast,” Fairfield said about the River Rouge defense. “They don’t have any two- way players and we have like four or five. It keeps them fresh.”

Another big problem for Muskegon was River Rouge junior quarterback Mareyohn Hrabowski, who came into the contest overshadowed by Martinez, but was clearly the star of the game. He had 15 carries for 175 yards and three touchdowns and completed 6 of 12 passes for 45 yards.

Hrabowski’s knack for big plays was a big reason why River Rouge was able to amass 330 yards in total offense.

“We knew they had a three-headed monster – it was going to be (Hrabowski, Deandre Bulley and Xavier Smith),” he said. “I thought we had a great game plan, and the kids played hard, but a missed tackle here, a misalignment there (hurt us). It’s not done on purpose. But tonight they got us. They beat us tonight.”

Muskegon took the opening kickoff and drove from its own 20 and drove to River Rouge 35, but the drive stalled when Martinez was sacked on fourth down at the Panther 47. 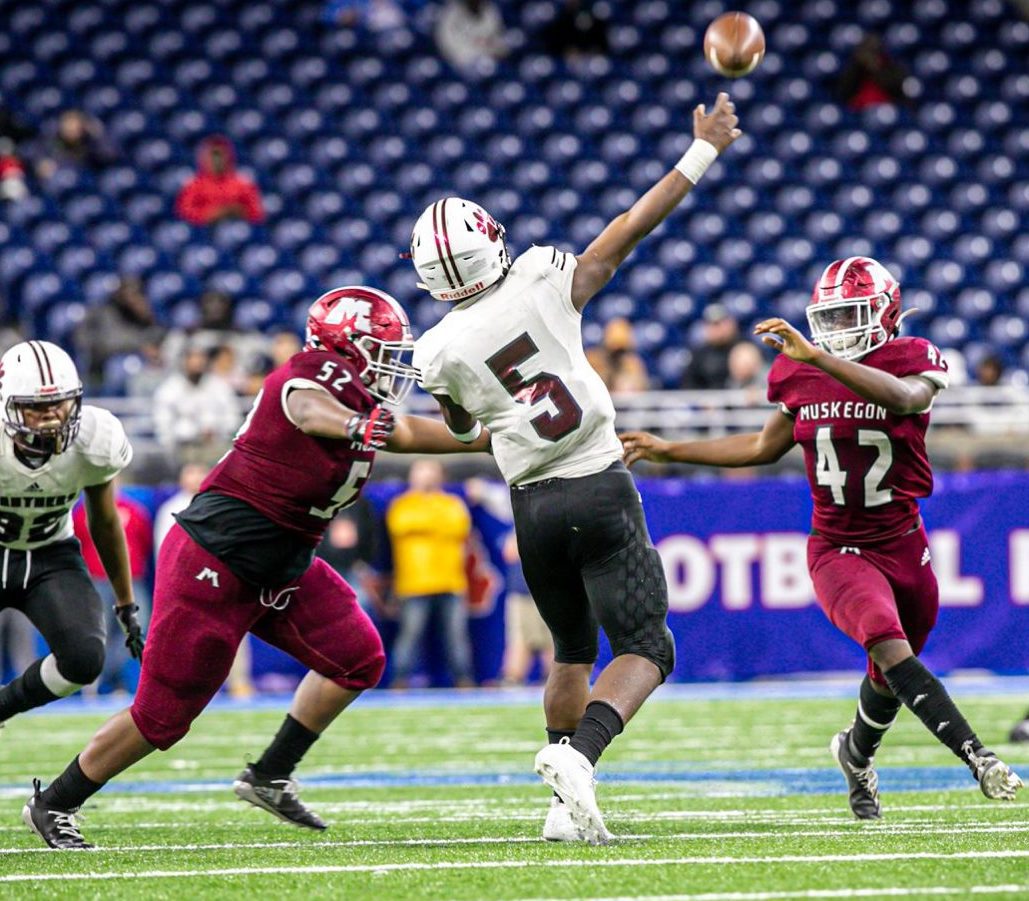 The Big Reds got on the board first with 39 seconds left in the first quarter, on a 12-play, 76-yard drive that took 4:39 off the clock. Martinez scored from three yards out, and the extra point by Jose Gutierrez made it 7-0.

River Rouge tied the score with a 1-yard touchdown run by Hrabowski with 7:57 left in the second quarter. The TD was set up by a 48-yard run by Hrabowski that left the ball at the Muskegon 1.

The Panthers stunned the stadium when Hrabowski faked a handoff, broke through the middle and rushed for a 40-yard touchdown with 58 seconds left in the first half. The extra point gave the Panthers a surprising 14-7 lead at halftime.

The Panthers kept the momentum after halftime and struck fast.

Rmontaye Caldwell returned the second half kickoff 36 yards to the Muskegon 35 yard line. On the first play from scrimmage, Hrabowski raced for a 35-yard touchdown, and the extra point made the score 21-7. 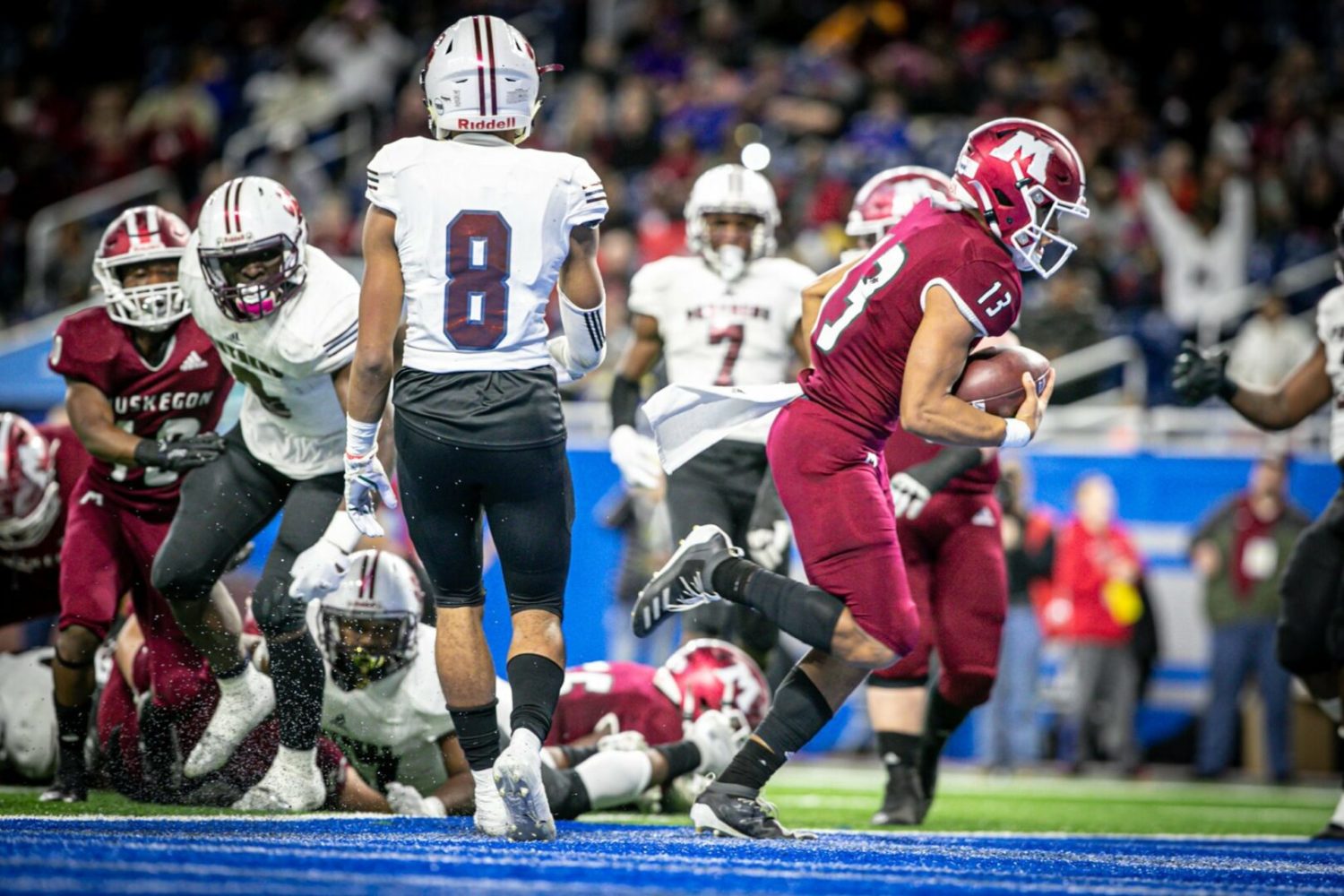 The Big Reds advanced to the River Rouge 43 on their first possession of the third quarter, but Martinez was sacked back at the Muskegon 40, and the Big Reds were forced to punt.

Muskegon drove to the Panther 40 on its second possession, but Japrie Henderson was dropped for a five-yard loss on fourth-and-10, and another scoring opportunity fell short.

River Rouge took a 24-7 lead on a 31-yard field goal by Avery Burch with 10:05 left in the game. The Panthers drove to the Muskegon 14, lost 15 years on a personal foul penalty, then drove back to the Muskegon 5. But they had to settle for the field goal after two more penalties – false start and delay of game – kept them out of the end zone.

The Panthers padded their lead on a 33-yard touchdown run Deandre Bulley with five minutes left in the game. Bulley finished with 76 yards on 15 carries for River Rouge.

Tommy Watts had 60 yards on 13 carries for Muskegon. The defensive leaders for the Big Reds were Tarran Walker and Tyreese Oakes with nine tackles apiece.

“We just didn’t play our game today,” Martinez said. “We have been good all 13 games. It just sucks. This was a bad time to play bad. They just wanted it more today.”