MUSKEGON – There have been an awful lot of hockey players over the decades – amateur and professional – who never had the type of game that Danil Gushchin had on Friday night.

The second-year forward for the Muskegon Lumberjacks scored all four goals in the Jacks’ 4-3 overtime victory over Waterloo at L.C. Walker Arena.

But it was the way he scored the last three that made jaws drop, and landed Gushchin on ESPN SportCenter’s Top 10 Plays of the Night list.

Waterloo led the Jacks 3-1 with less than two minutes remaining in regulation, then Gushchin went to work.

He redirected a shot from linemate Oliver MacDonald into the net to cut the lead to 3-2 with 1:24 left. Then he took a centering pass from Luke Mobley as the clock ran down and scored from close range with only four seconds left, tying the game and sending it to overtime.

Gushchin was denied on a breakaway opportunity less than a minute into overtime, but made up for it by scoring the game-winning goal about 1:25 into the extra session. He did it by beautifully stick-handling the puck past a defender, breaking in on goal from the left, and beating Black Hawks goalie Gabriel Carriere with a nice move in front. 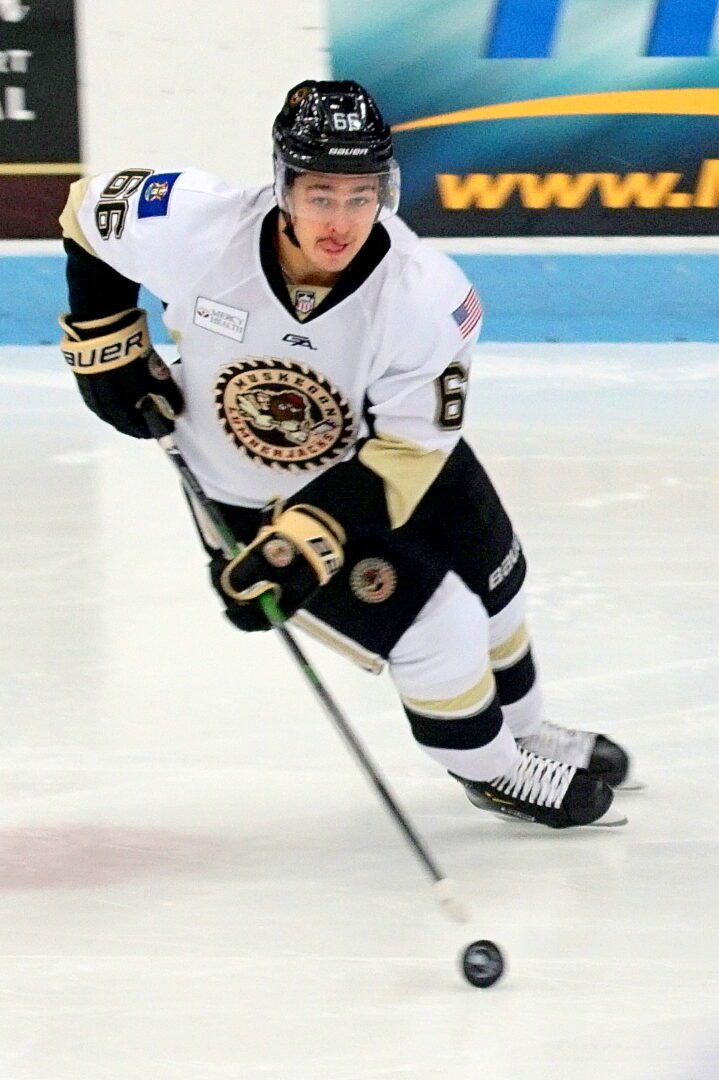 That gave the Lumberjacks their seventh victory in a row and sent fans out of the arena buzzing about the incredible feat they had just witnessed.

The Lumberjacks, who lost in overtime the next night, will try to get another streak going on  Friday and Saturday with home games against Green Bay. Puck drop for both is 7:05 p.m.

Gushchin, who hails from Yekaterinburg, Russia and is still learning English, was modest when asked about his scoring outburst.

“I was really happy,” said Gushchin, speaking with the interpreting assistance of teammate Alex Konovalov. “A lot of guys helped me do that. The most important thing is that the team won. That’s all that matters.”

Word about his incredible scoring outburst reach ESPN’s SportCenter, which listed Gushchin’s heroic flurry of goals as No. 5 on its Friday list of Top 10 Plays of the Night, and showed a video of his game-winning goal.

Gushchin said he learned about his SportsCenter moment through a team group chat and thought it was cool, but did not get carried away with his newfound notoriety.

“It’s a big exciting thing, but again a lot of guys helped me do it,” he said.

Gushchin said he shared a link of the broadcast with his parents back home in Russia, and they were “so excited for me.”

“That was pretty cool,” the coach said. “Gush works very hard for what he gets, and it’s great for the organization and the league when we get publicity like that.”

Picking up the production

Gushchin showed a lot of offensive potential last season in his rookie campaign with the Lumberjacks, turning in 16 goals and 20 assists. He looks even better this season, and his four-goal burst on Friday brought him to eight goals through only 12 games this season, along with six assists.

“The big thing between this year and last year, I was a rookie last year, and this year I have more confidence,” he said.

Gushchin has been playing on a line with fellow forward Christope Fillian and center MacDonald, and the trio has been more than productive.

Fillion has also been productive with two goals and five assists for seven points.

MacDonald also has a four-goal game this season, and it also came in dramatic fashion. He scored a three-goal hat trick in the first period of an Oct. 11 road game against Team USA, propelling the Lumberjacks to their first victory of the season, 8-1.

“We’re very fast together,” Gushchin said about his line.

Closing in on first place

The Jacks did not win both games last weekend, but still came away with three points in the standings, after Friday’s dramatic win over Waterloo and Saturday’s 4-3 overtime loss to the Youngstown Phantoms.

The Jacks’ recent hot streak – winning seven of their last eight after losing their first four games – has brought them to within two points of the top of the USHL’s Eastern Conference standings.

The Lumberjacks are currently in third place with a 7-4-1 record and 15 points, only two points behind first-place Dubuque and Chicago. Both Muskegon and Chicago have played 12 games while Dubuque has only played nine.

Team USA and Youngstown are tied for fourth place with 14 points, Green Bay is in sixth with 13 points, Cedar Rapids is seventh with12 points and Madison is eighth with four.

”The boys were just getting to know each other,” Gushchin said about the team’s slow start and sudden resurgence. “We did not have confidence in each other. But now after spending some time together we are playing better as a team and trusting each other more and more.”