MUSKEGON – The Muskegon Lumberjacks had only one shot at happiness this weekend, and it was completely ruined by Des Moines goalie Christian Stoever.

The Jacks mounted a pretty vigorous offensive attack, outshooting the visiting Buccaneers 40-25. Unfortunately only one of those shots got past Stoever, and Muskegon came out on the short end of a 3-1 score at L.C. Walker Arena on Saturday. 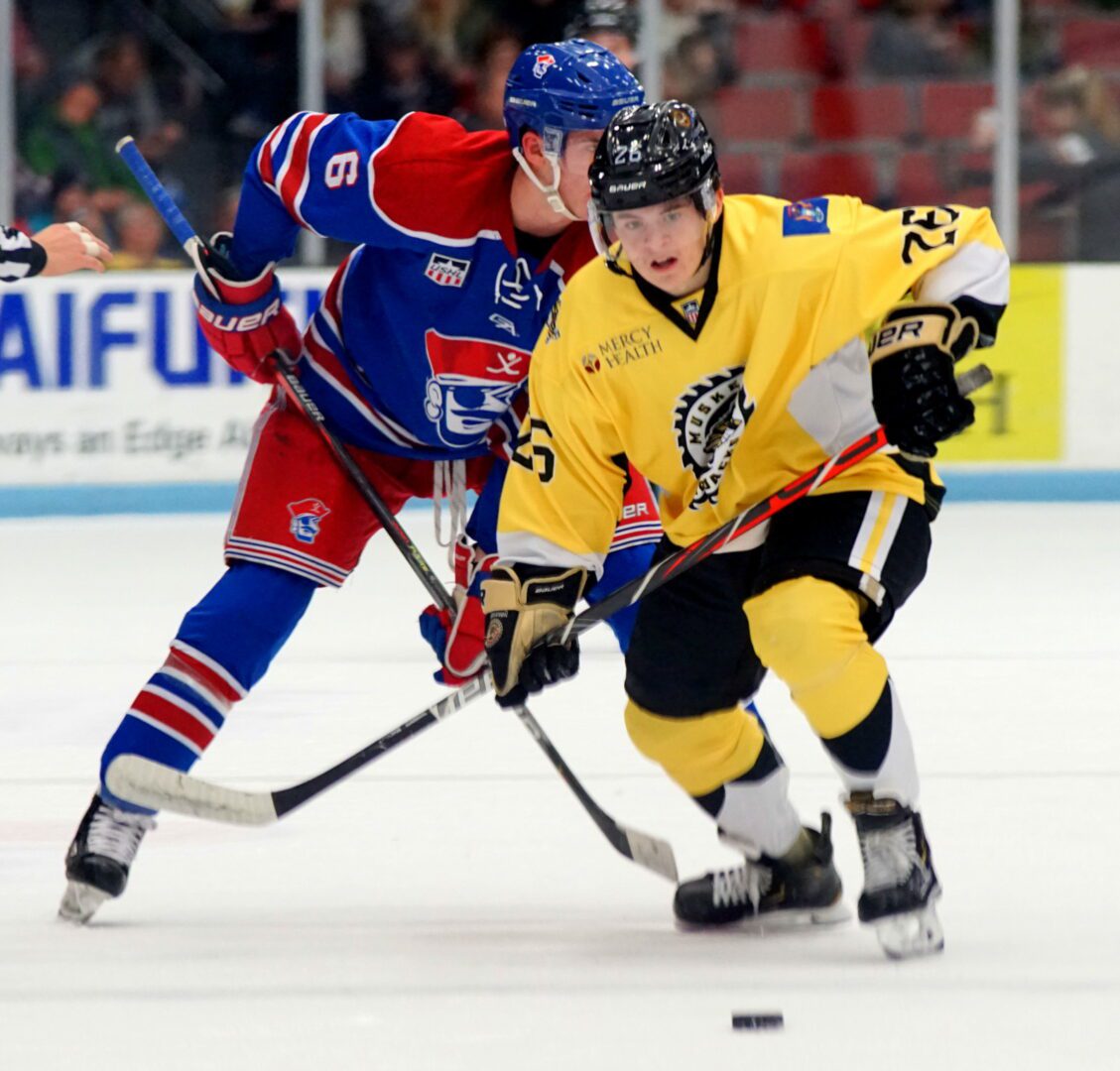 It was a rare weekend when the Lumberjacks had only one game, so this is the first weekend since Oct. 4-5 that they didn’t earn any points in the league standings.

“Their goalie made some real good saves,” said Lumberjacks coach Mike Hamilton, whose team will head out west for a pair of games in Omaha next weekend. “I just don’t think we came out with the energy and the passion we normally play with.

“In the second period we had five or six opportunities to tie it up, and we made one mistake and it’s 2-0, and then before you know it’s 3-0. I don’t think we were sharp today, and I thought we weren’t sharp at practice all week.”

The Lumberjacks fell to 8-6-1. They came into the game in fourth place in the USHL’s Eastern Conference with 17 points, but three teams were tied for fifth place with 16, so by the time all the scores are in, Muskegon could fall a notch in the standings.

The good news is that the conference race remains very tight early in the season. The Jacks came into Saturday only four points (two wins) behind first-place Chicago, so no serious damage has been done.

The Jacks just don’t want to have too many nights like they had against the Buccaneers. 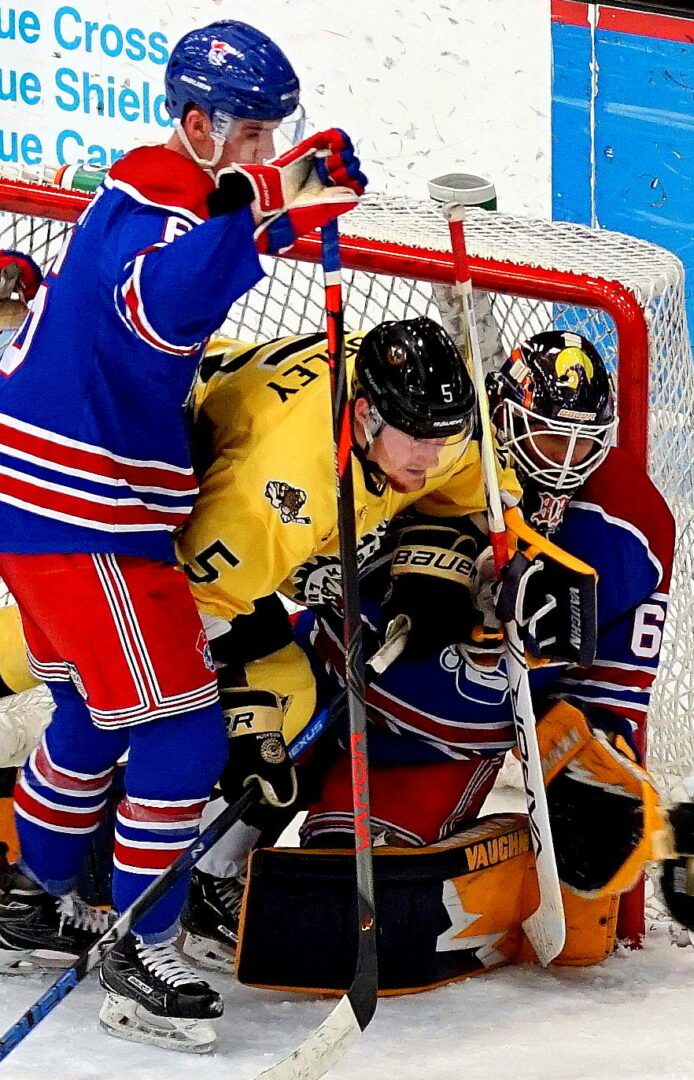 Muskegon forward Luke Mobely fights for postion in from of the Des Moines net. Photo/Leo Valdez

“We don’t have an urgency on the power play, so there is going to be a big shake-up,” Hamilton said. “We got to get guys who want to hound pucks. We didn’t work hard enough to get pucks and we lost our face-offs. We have to work hard to hound pucks and put them in the net.”

Des Moines’ Michael Mancinelli scored the only goal of the first period on a power play just 2:48 into the game.

He added a goal at 10:53 of the second period, and Joey Strada scored less than a minute later, and the Buccanneers led 3-0 after two periods.

Muskegon finally broke the shutout when Harrison Roy scored his second goal of the season at 4:40 of the third period, with assists from Tanner Kelly and Dylan Gratton. But that’s all the Lumberjacks could muster, and they skated off with a frustrating loss.

Muskegon goalie Noah Giesbrecht took the loss, dropping to 5-5-1 on the season. 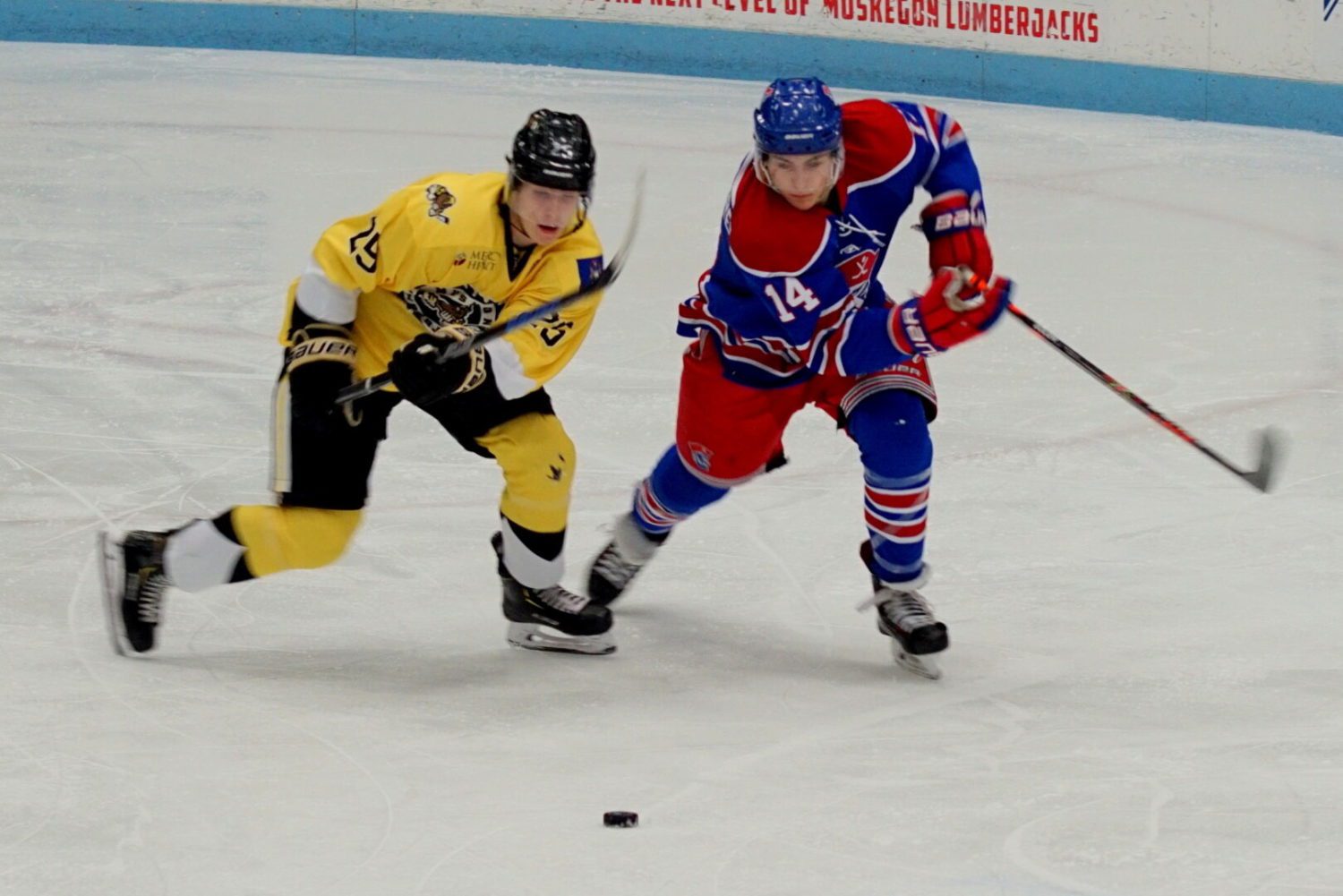 Muskegon’s No. 25 Tanner Edwards races for the puck against Alex Laferriere. Photo/Leo Valdez 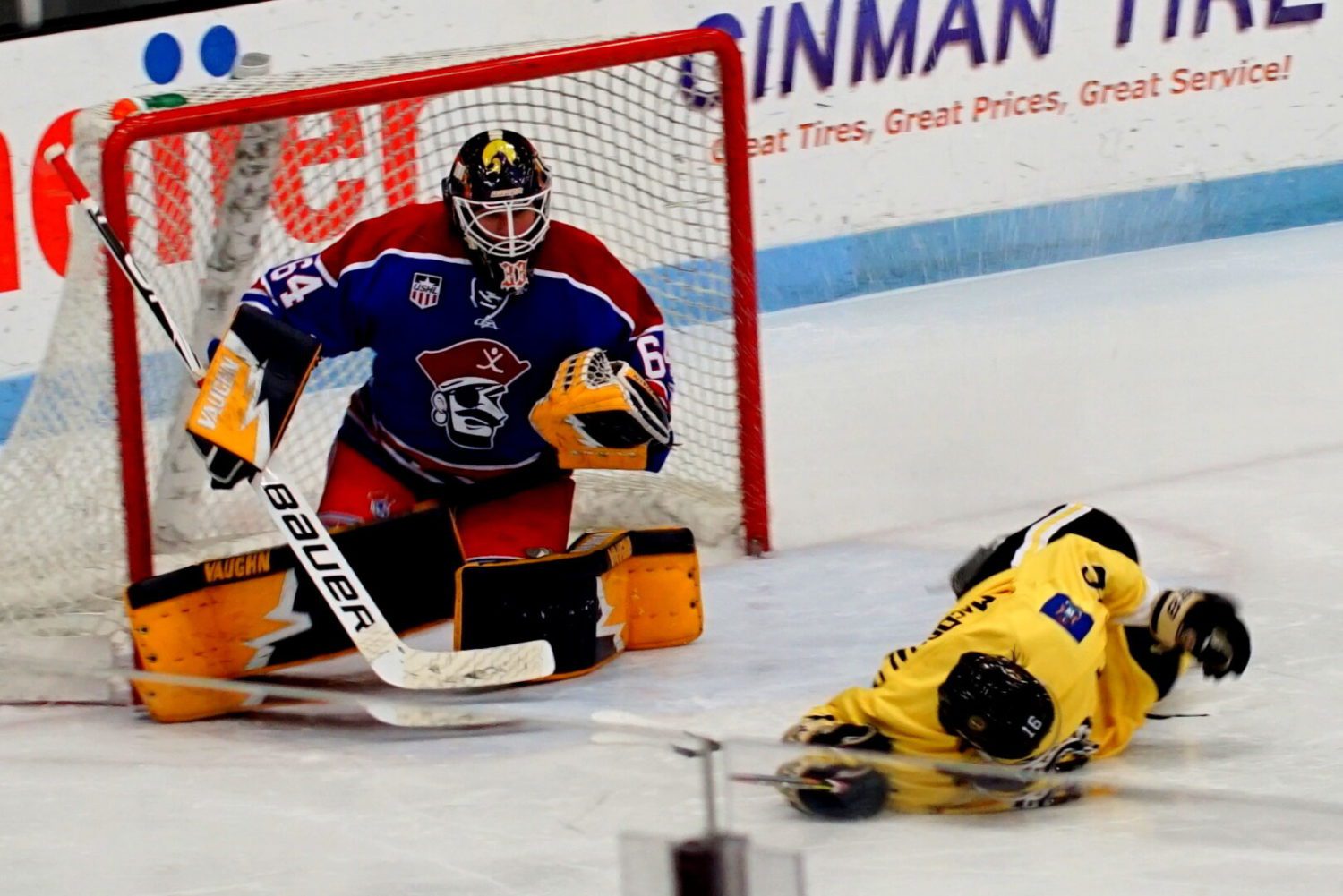 Christian Stoever scares down a takes player after the attempted shot. Photo/Leo Valdez 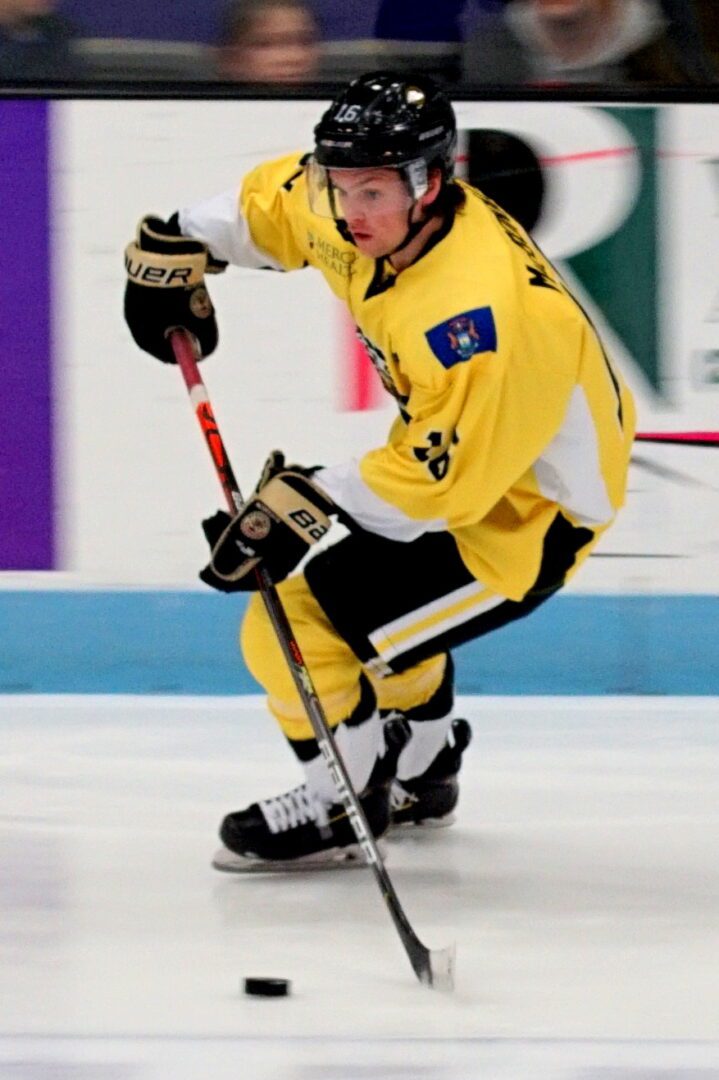 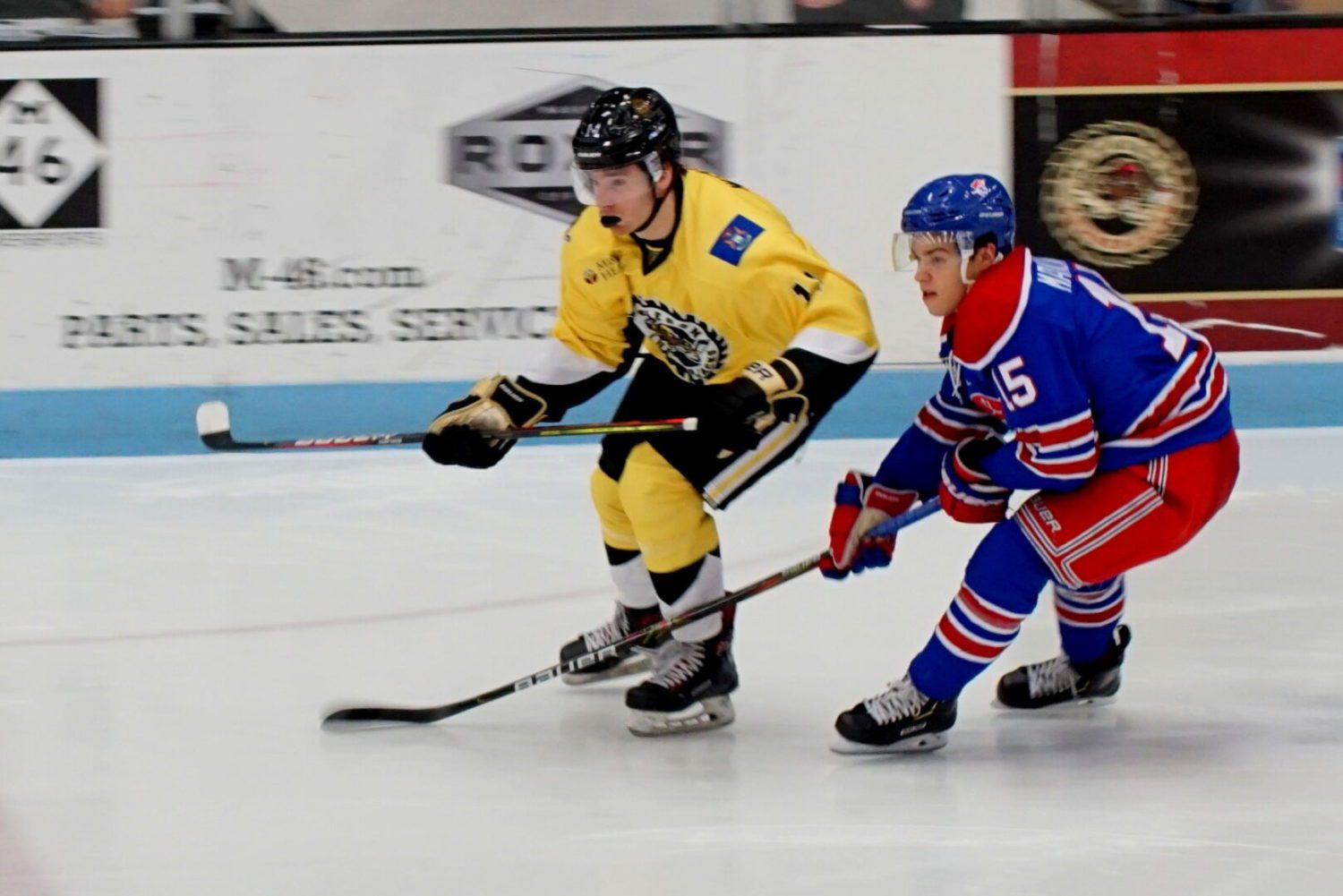 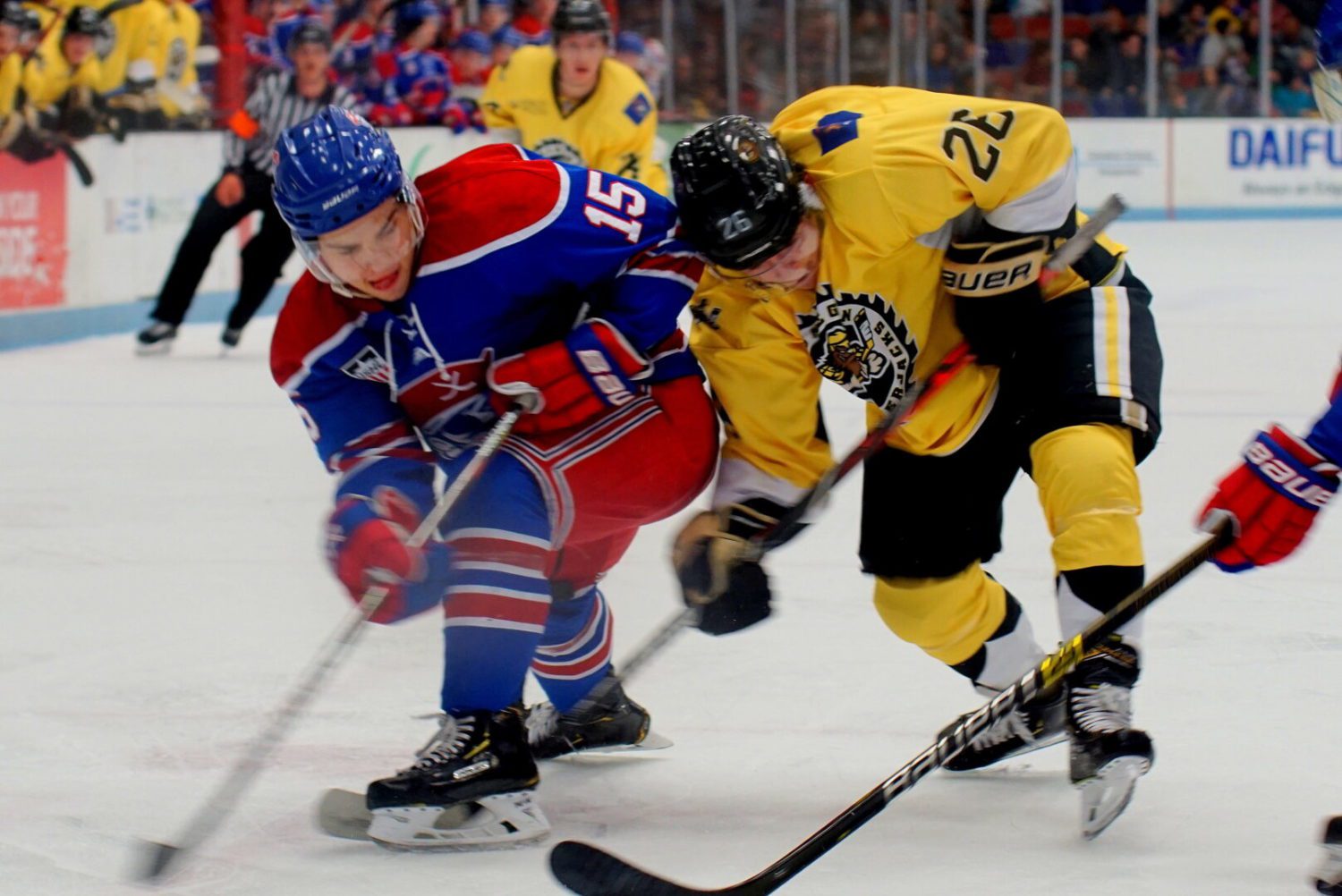 No. 26 Tanner Kelly tries to get to the puck before Michael Mancinelli. Photo/Leo Valdez 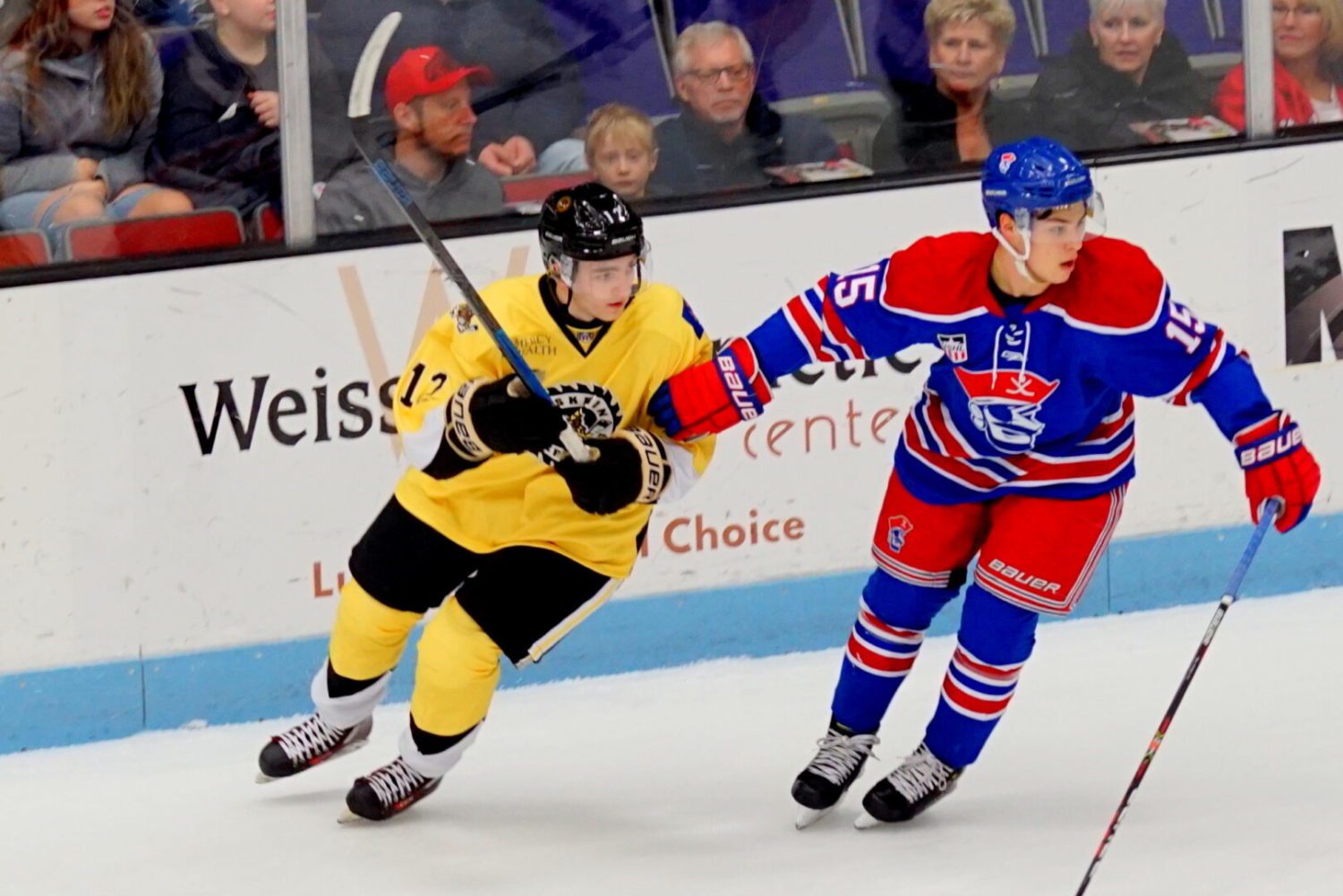 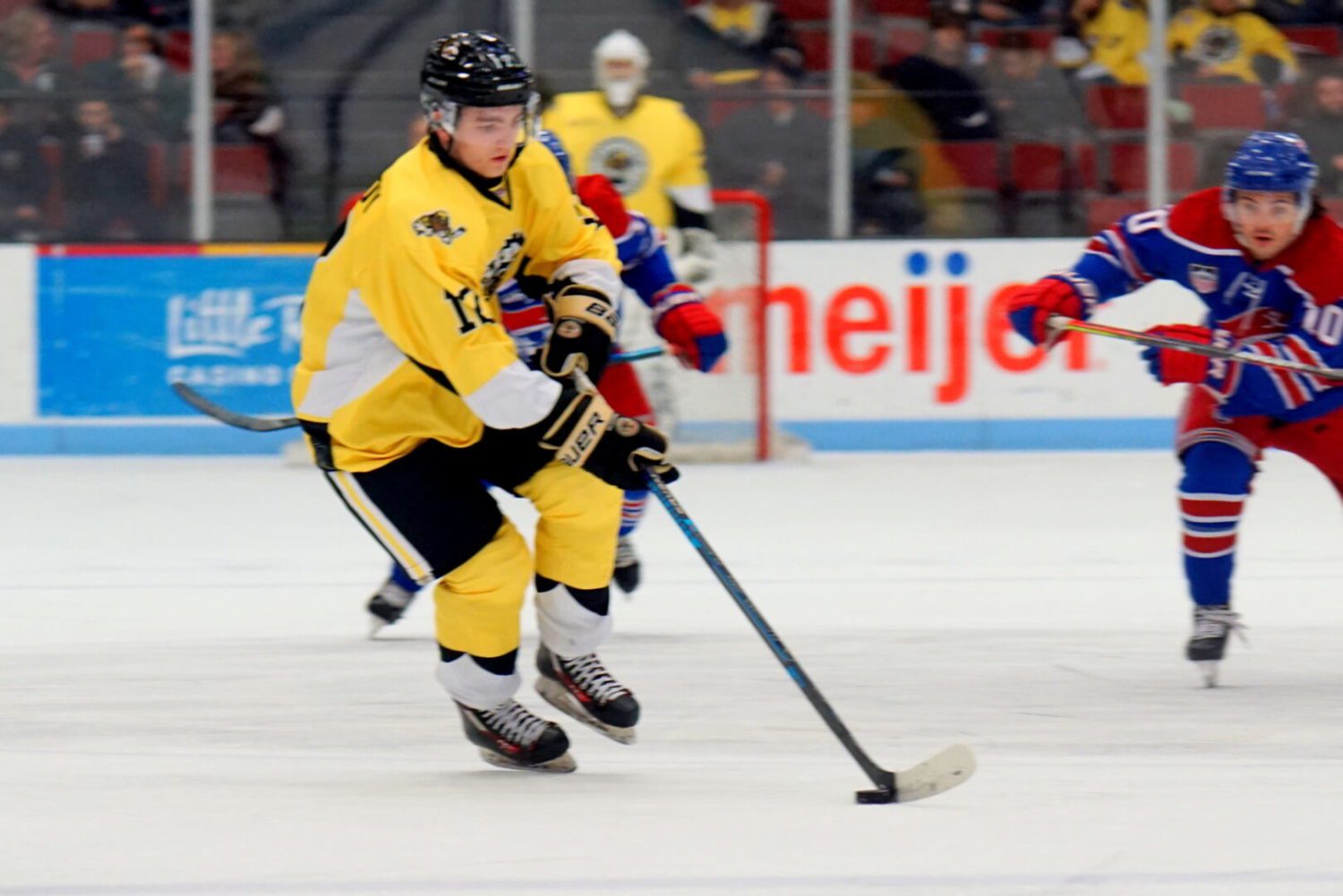 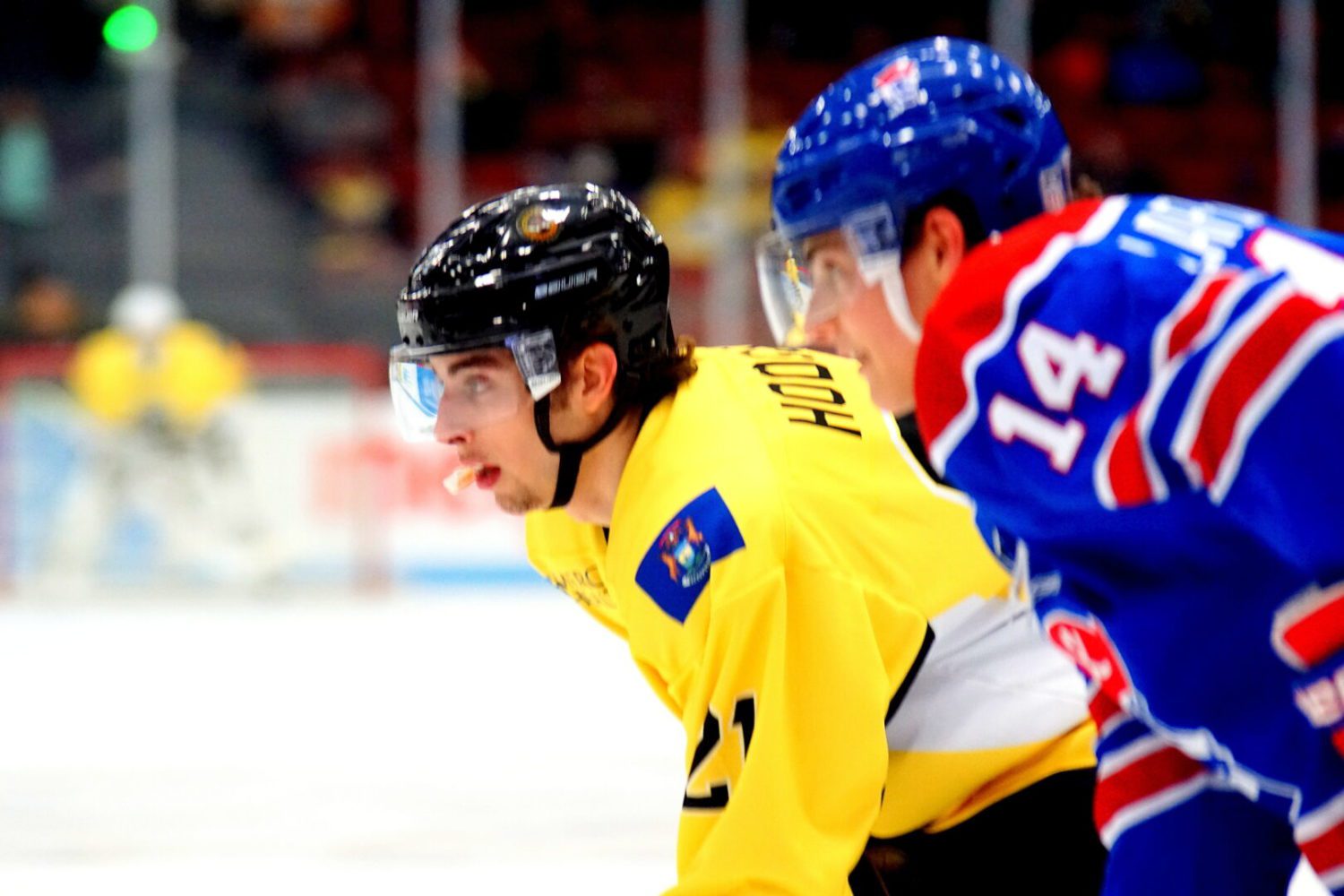 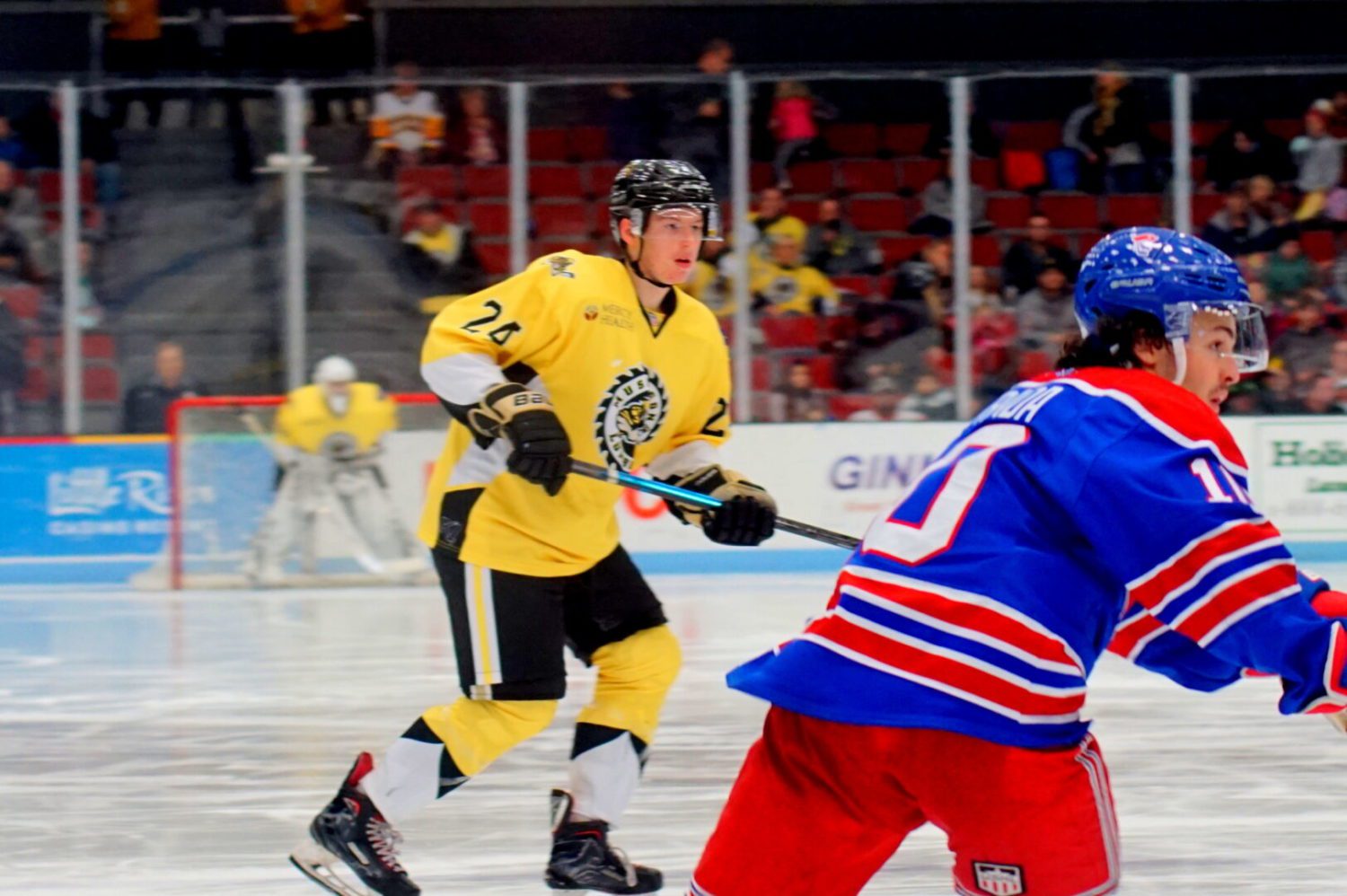