Montague peaking in the playoffs again, set for Sanford Meridian in regionals

in the state playoffs.

Last year the Wildcats were underestimated heading into the postseason after losing two regular-season games, including the last one. Then they promptly ripped off four straight wins and ended up in the state finals before losing to longtime power Jackson Lumen Christi.

This season has brought more of the same. Montague again lost two regular-season games, nail-biters against conference rivals Oakridge and Ravenna, which again led some to speculate that the Wildcats may not go far in the playoffs.

But here they are again, back in the regional round after a first-round win over Newaygo (55-7) and an exciting revenge win last week against Ravenna, 20-13 in overtime. 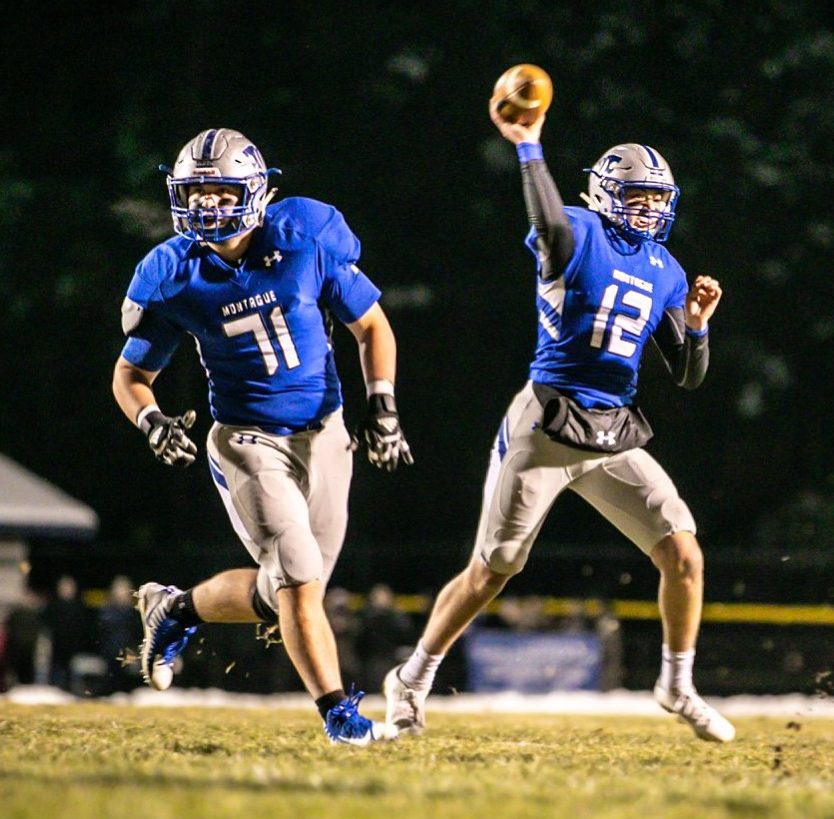 Drew Collins makes the pass for Montague while No. 71 Christopher Kessler looks to block. Photo/Tim Reilly

Montague will host Sanford Meridian on Saturday at 1 p.m. in a Division 6 regional matchup, with the winner advancing to the state semifinals against either Calumet or Maple City Glen Lake.

One thing that’s different this year is that both of Montague’s losses came at home, and that has created some doubt, as well.

“I brought up how people were talking about the two losses at home,” said Montague head coach Pat Collins about what he’s told his team. “We talked about the buzz going around. Last year we lost the first and last game, which were each on the road, and nobody was really talking about it.”

Critics have also mentioned Montague’s tendency to sometimes turn the ball over. Last Friday they lost four fumbles while managing to pull out the win against Ravenna.

What’s less known is that all but three of the team’s turnovers came in the two games against Ravenna. Otherwise hanging on to the ball has not been a major issue.

“It was kind of funny how people want to look at it,” Collins said.

Collins isn’t worried about the critics, or about having an emotional hangover following the tough win over Ravenna last week. He admits there are still wrinkles to work out, but that’s part of the normal process.

“I think at this point it should be fairly easy to move on from last week,” the veteran coach said.  “This one (last weekend’s game) kind of felt like a bit of a loss, because we have so much to learn from tape. Ravenna created turnovers and we had 115 yards in penalties, but still won somehow. We’ll make sure they know they were lucky to move on and we’ll try to improve.”

The Wildcats will be facing an opponent that few probably expected to make it this far. Sanford Meridian is 8-3 on the season, with regular-season losses to Clare, Beaverton and Lake City. The loss to Clare was by an odd 3-2 score, and the Mustangs were shut out by Beaverton 20-0.

But Sanford Meridian turned it on in the playoffs, upsetting traditional power Ithaca 19-14 in the first round of districts, then beating Hemlock – the team that handed Ithaca its only regular-season loss – 35-21.

The Mustangs are apparently another team that saves its best for the playoffs, which means Saturday’s game could prove to be very interesting.

“They’re a tough, physical team,” Collins said. “They’re known for being physical and having a good defense. They can pound you with the run and have good size in their backfield.”