GRAND HAVEN – The Grand Haven boys basketball team can definitely knock down 3-pointers, and the points from beyond the arc proved

to be the difference in the Bucs’ rivalry matchup with Spring Lake on Friday. 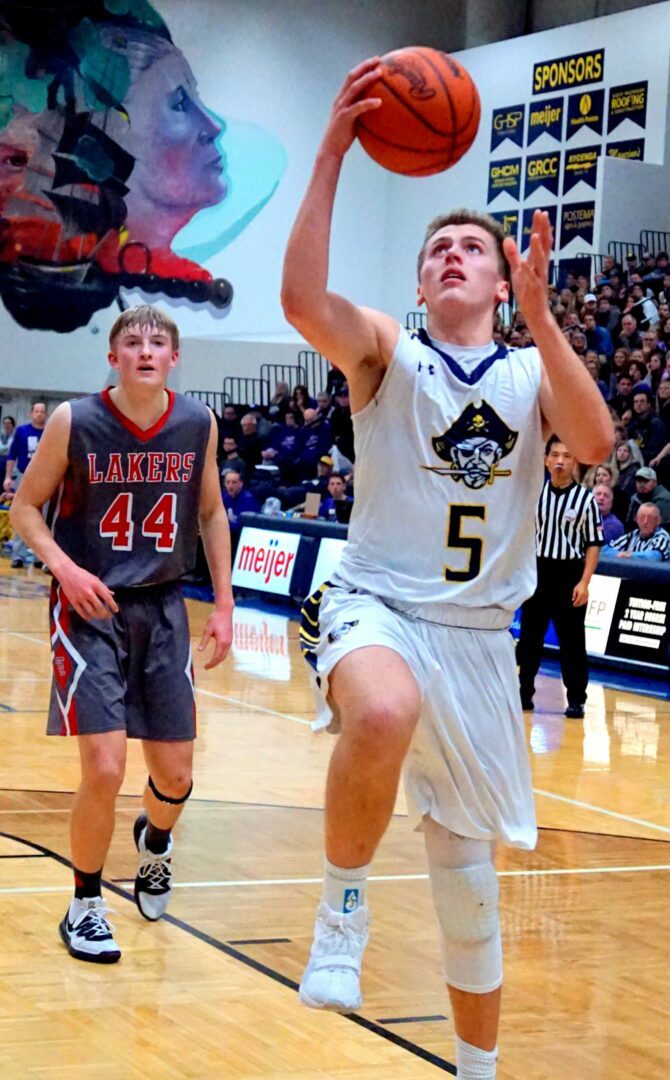 Owen Worthington goes in for a layup as Spring Lake’s No. 44 Lucas Lyyski trails. Photo/Leo Valdez

Grand Haven nailed six triples, all in the first 10 minutes of the game, and ended up with an impressive 59-45 non-conference victory at home in the annual Drawbridge Classic.

The Buccaneers improved to 3-0 on the season while Spring Lake dropped to 2-1.

Friday’s game also served as the Community Cares, or Bucs Pride night, to honor those who have fought or are fighting cancer.

“This game just always means a lot,” said Grand Haven senior Owen Ross, who led all scorers with 20 points. “Not only having it be Spring Lake, but having it be Bucs Pride night, it was a game we wanted to win. Especially at home, because we know all the fans come out.”

The points piled up early as teams traded three-pointers. Six of the first seven buckets in the game were from long range, with the lone two-pointer turning into an “old fashioned” three-point play.

“It sure was fun there to start off,” said Grand Haven coach Greg Immink, whose team scored 18 of its first 21 points from 3-point land. “Both teams seemed like whatever they put up was going in from long range. It got the crowd into it.”

Grand Haven came out hot in the second quarter with a 9-0 run and took a 24-15 lead. The outburst was sparked by back-to-back threes by Bashir Neely and Drew Sinke. Spring Lake never got closer than four points the rest of the game. 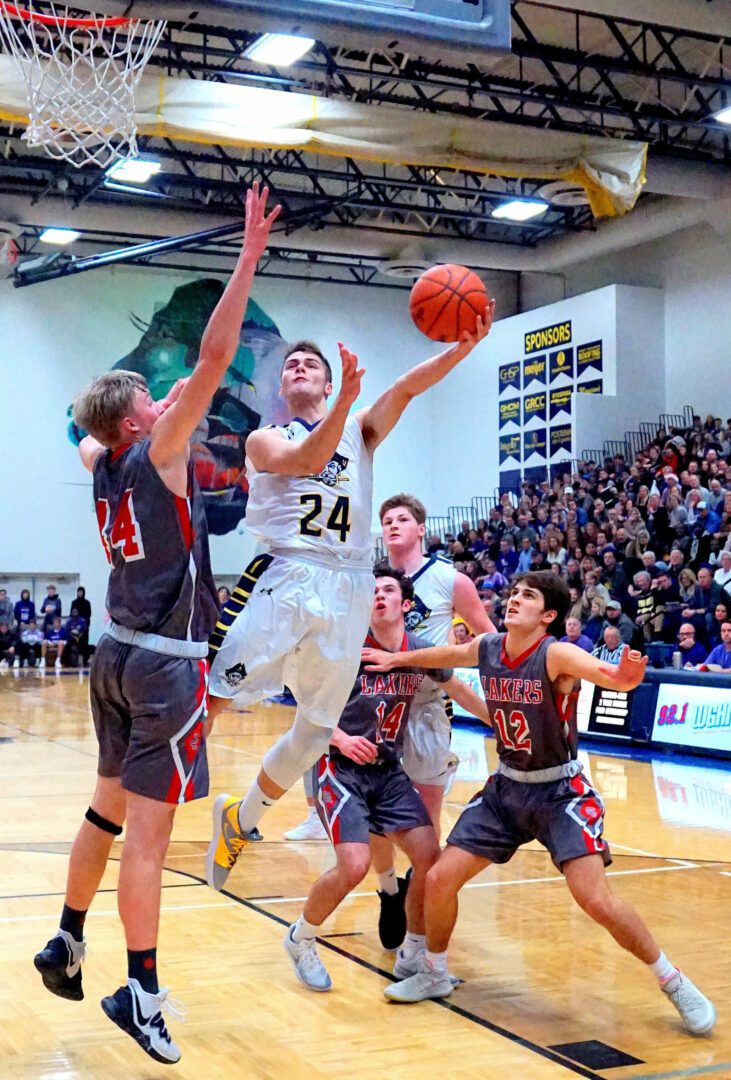 Owen Ross scoops toward the basket against Spring Lakes No. 24 Zach Keyser

“The second quarter, I thought we did a better job of cleaning up the backboard,” Immink said. “I thought offensively we were able to penetrate their defense a little bit better, getting the ball around the basket, which made for easier scoring opportunities.”

Spring Lake Coach Bill Core said Grand Haven’s depth started to wear away at his team in the second quarter.

“That first quarter was pretty exciting back and forth,” Core said. “Sometimes you play on adrenaline, and then it starts to wear off. They’re so deep on their bench, they have so much size, eventually it wore us down.”

Neither team shot well in the third quarter, combining to make just five shots from the floor. The Lakers grabbed a 9-7 edge to close the gap to 42-31 heading into the fourth.

Ross had his most productive quarter in the final stanza, scoring 10 points to help Grand Haven extend its lead. Spring Lake drew within nine points at 48-39 with 2:45 to play, but Ross scored eight points in the final 2:29 to keep the lead comfortable.

“We didn’t have an answer for Owen Ross there in the fourth quarter,” Core said. “He had a monster game tonight.”

Sophomore Kaden George led Spring Lake with 14 points while Sam Sheridan totaled eight. Lucas Lyyski, the leading scorer for Spring Lake so far this season, was held to six points, but grabbed 15 rebounds and blocked a handful of shots.

Despite the loss, Core said he saw a lot of good things from his squad.

“I’m proud of my team,” he said. “We battled, we did a lot of great things. There’s a lot of things moving forward that we can build on. We’re not into moral victories, we didn’t come here for that. But I’m super proud of my guys.” 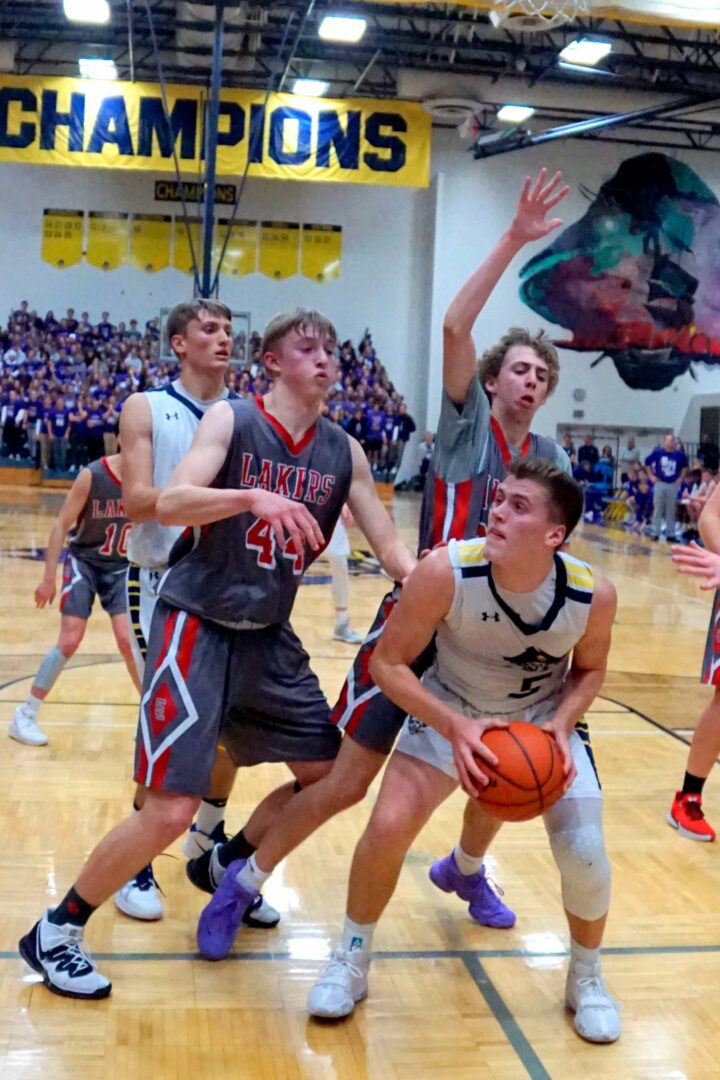 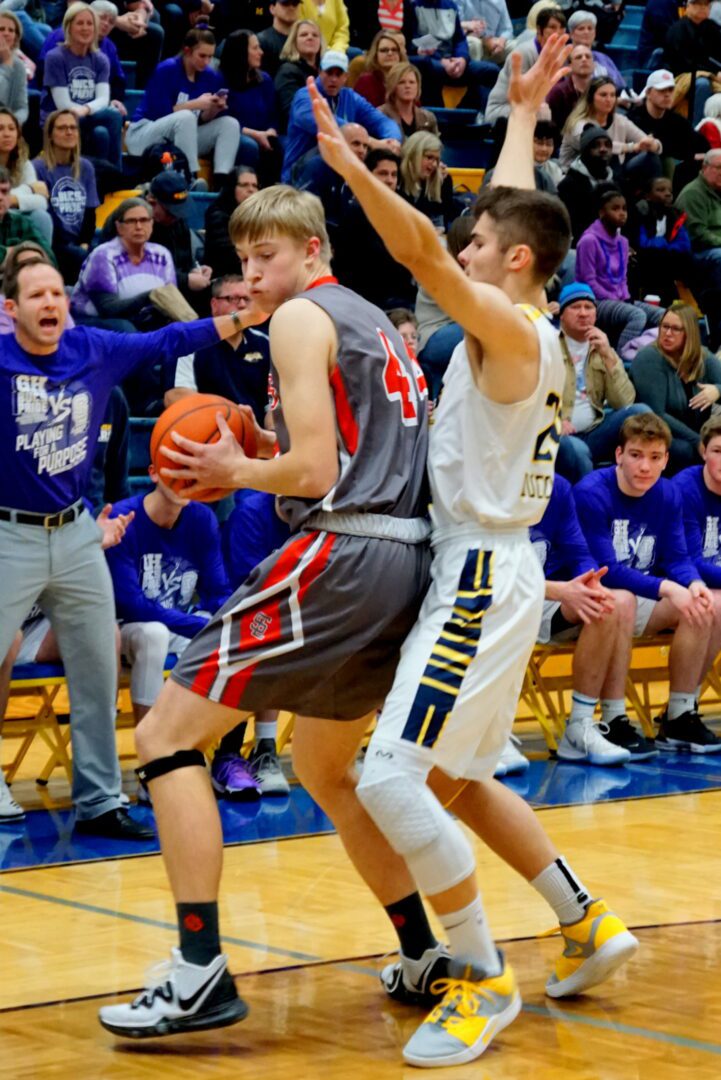 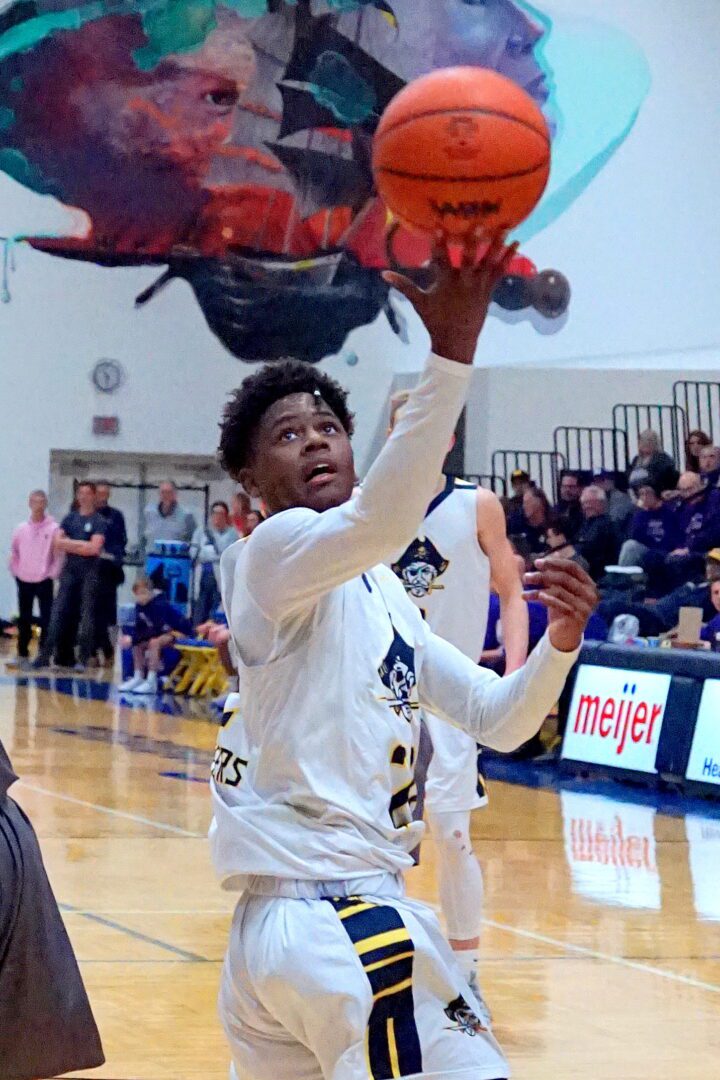 Bashir Neely makes a play with the ball for Grand Haven. Photo/Leo Valdez 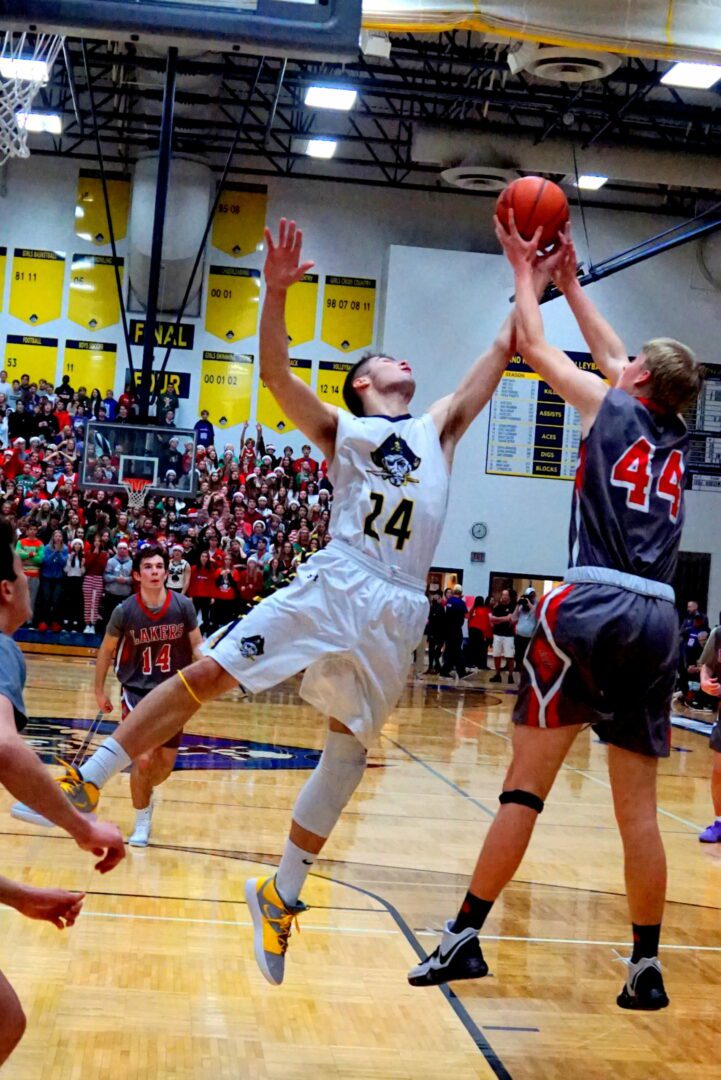 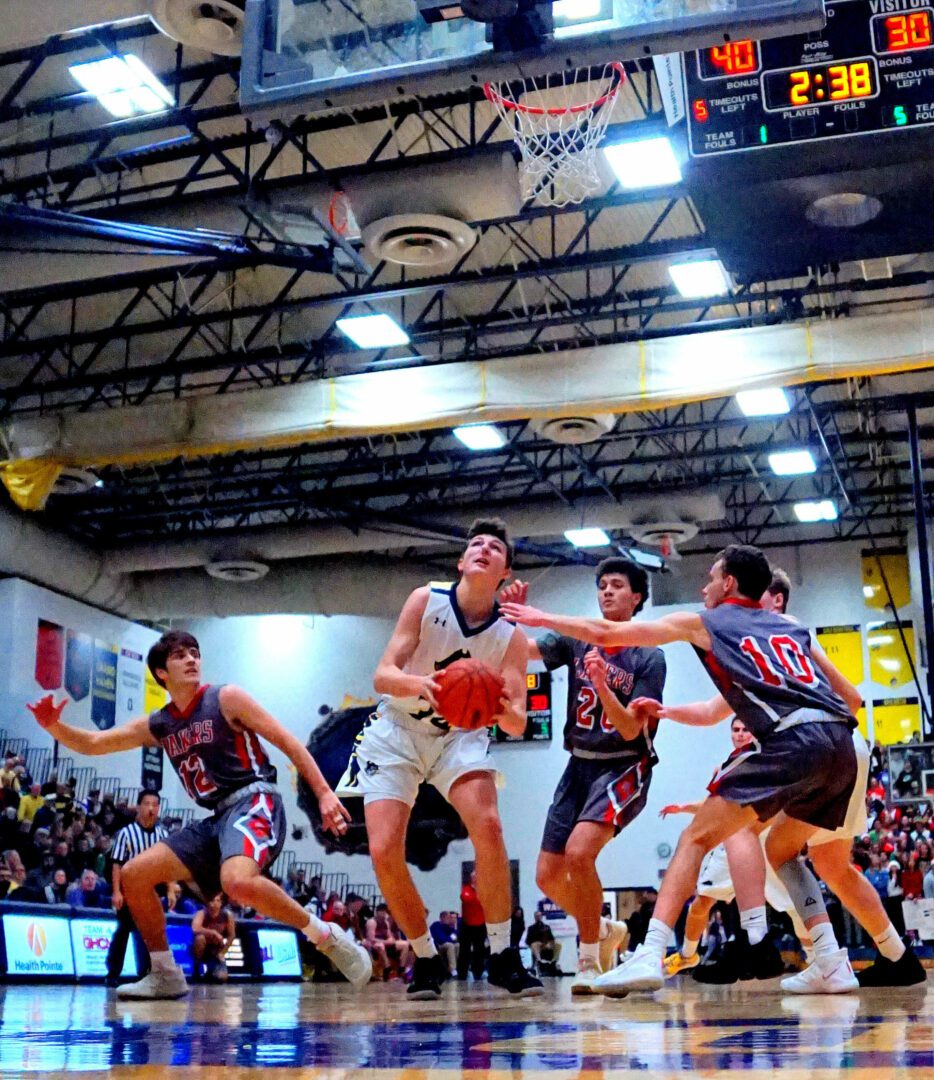 Nick Stump looks up at the hoop while Spring Lake’s No. 10 Cayden Ball reaches to make a steal. Photo/Leo Valdez