Lumberjacks wake up with an exciting 5-3 win over Madison, snap six-game winless streak

MUSKEGON – It was just one victory in the middle of a long and thus far frustrating season.

But for the Muskegon Lumberjacks, it was a very big win indeed. 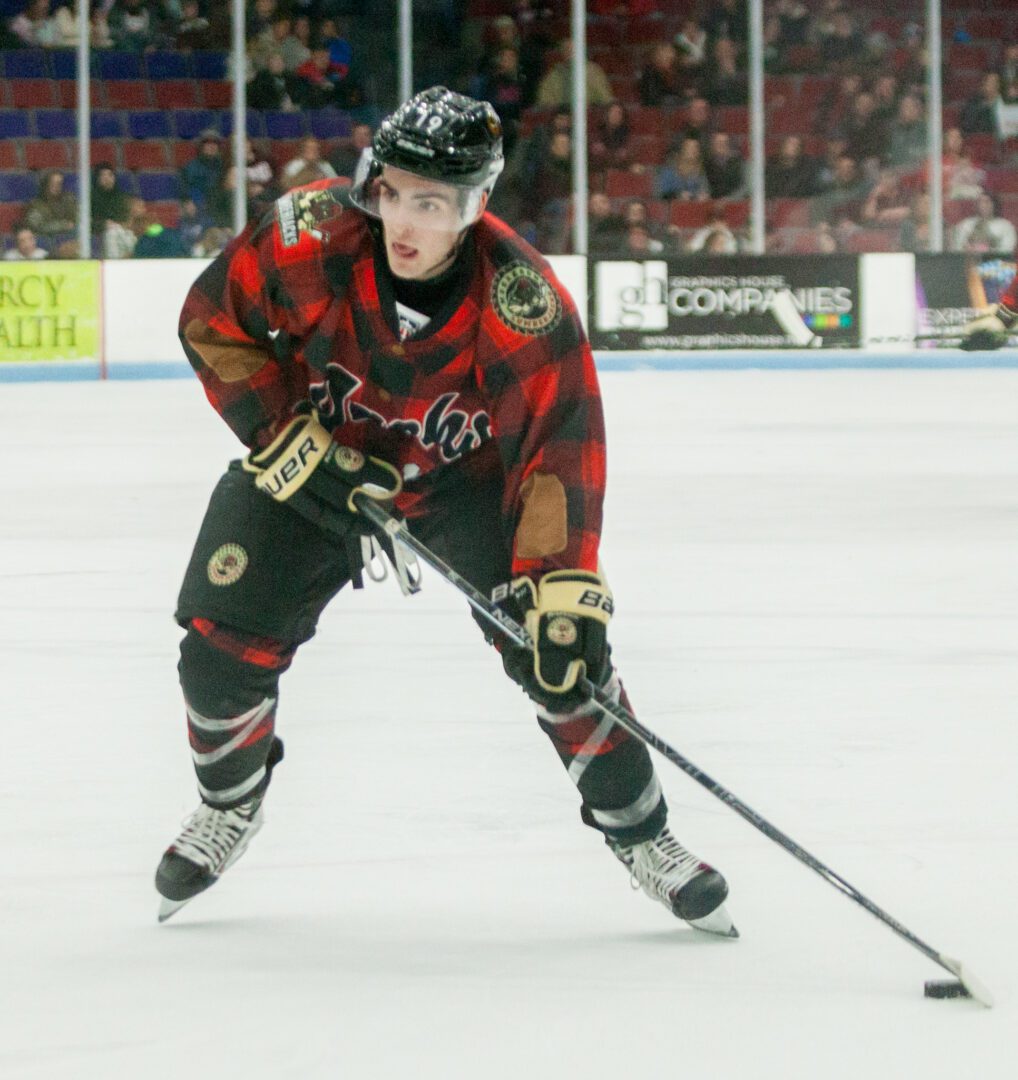 The Jacks had not won a game since beating Chicago on the road on Nov. 29. They were 0-5-1 since then, and returned from their Christmas break with an ugly loss to last-place Madison on Friday.

If they had lost again on Saturday, they would have gone a full month without a victory, and been just one loss away from posting a winless December.

But the Jacks looked like a team that suddenly woke up, jumping out to a four-goal lead, then hanging on for a 5-3 win over Madison in the finale of the two-game weekend series at L.C. Walker Arena.

Muskegon improves to 10-14-2 on the season and remains in seventh place in the USHL’s Eastern Conference. They are in hot pursuit of Cedar Rapids, the sixth-place team that came into Saturday with a narrow three-point lead over the Jacks in the standings.

The Jacks will host Youngstown at home on Wednesday at 8:05 p.m. in a special New Year’s Eve contest.

“It’s a relief because we lost five in a row, and that starts to wear off on everybody, the staff and the players,” said Lumberjacks Coach Mike Hamilton. “When you go through stretches like that it’s easy to start questioning what is going on. At the end the day wins are important and it’s good for the room. The guys are smiling again, and hopefully we can use this as something to build off.” 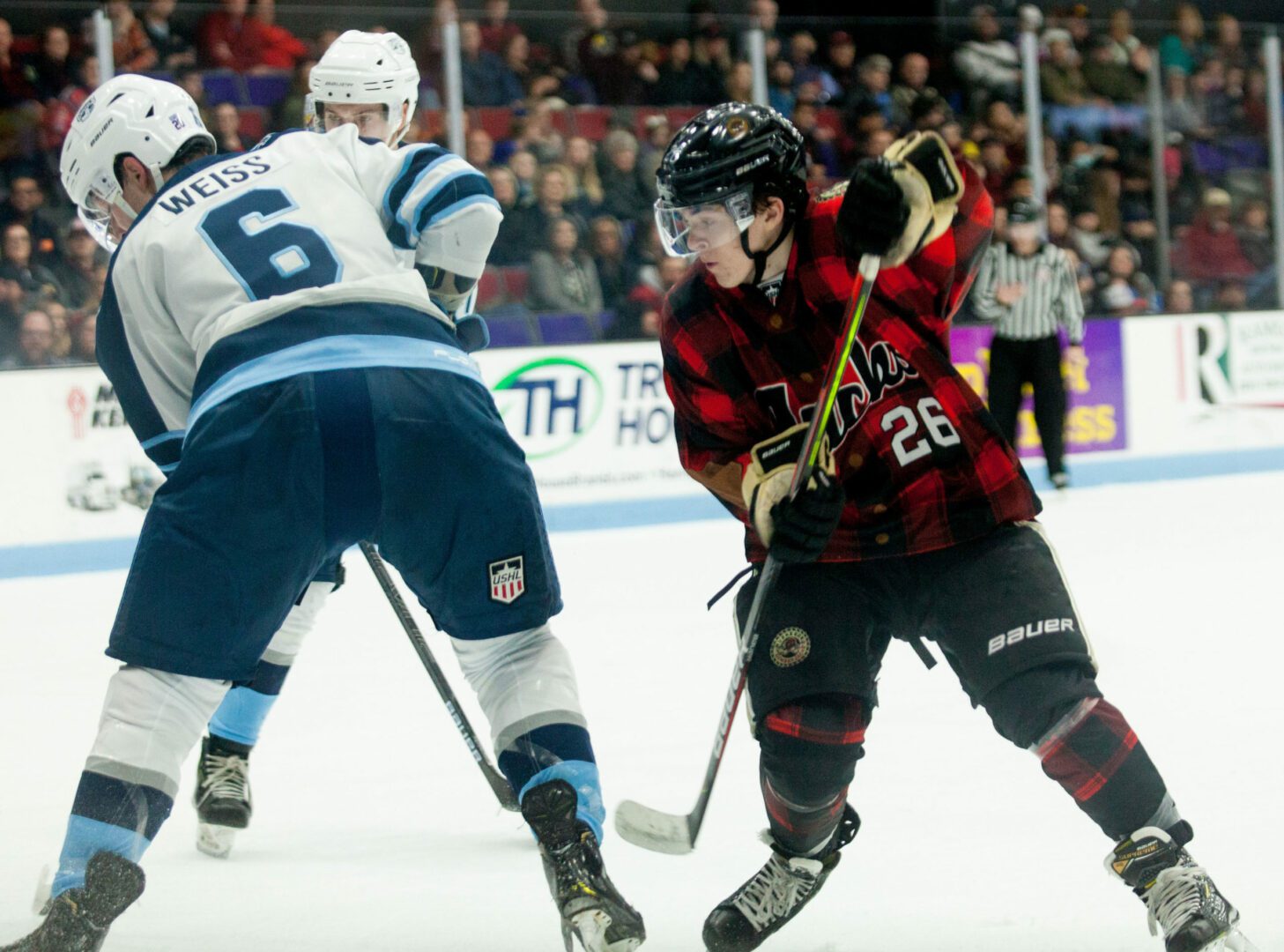 Muskegon’s No. 26 Tanner Kelly looks to maneuver for the puck around Hunter Weiss. Photo/Jason Goorman

The Lumberjacks outshot Madison by a wide margin for the second straight night, this time by a total of 34-23. But on Saturday the shots started going in, after a frustrating Friday when they only scored once on 35 shots.

“The big thing for us is we watched every shot (on video) this morning,” Hamilton said. “We were not getting enough traffic in front of the net or stopping in front of the net. So it was just simple minor details that worked tonight and paid off.”

One Lumberjack who was extra happy was forward Tanner Edwards, who returned from a one-game suspension for an infraction in a prior game, and led the attack with two goals and an assist.

“I was super juiced to play yesterday, and I was upset when I got the news that I couldn’t play,” said Edwards, who scored his eighth and ninth goals of the season on Saturday. “Going into tonight I was super excited for the chance to beat Madison, and I think we got out there and played our game and dominated.”

Also feeling pretty good was new Muskegon goalie Eric Green, who played his second game for the Jacks after taking the loss in his debut on Friday night. 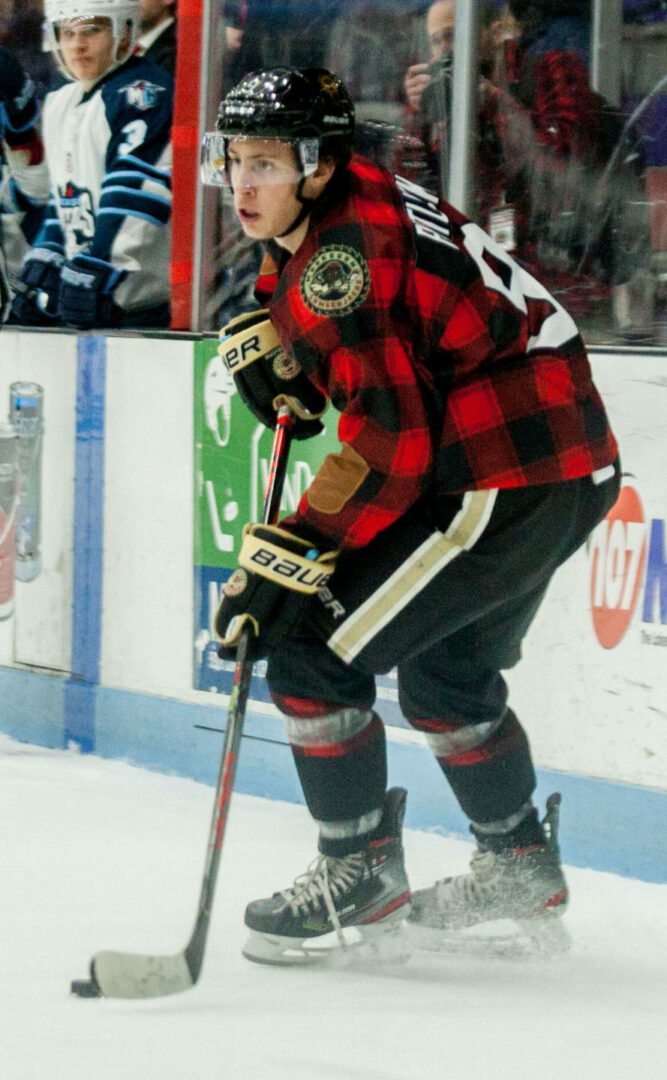 “It felt great,” said Green, who is on loan from the University of Massachusetts-Lowell, where he has been the backup goalie for the past season and a half. “I actually haven’t played in a while, so it was nice to get the rust off and a great feeling to get the first win.”

Edwards scored the only goal of the first period, with assists from Tanner Kelly and AJ Hodges.

The Lumberjacks siezed control in the second period, collecting goals from Hodges just 42 seconds into the period, and Cameron Berg at the 1:45 mark, to take a 3-0 lead at the second break.

Hodges took a nice feed in front of the net from Alex Gaffney to score his goal. Edwards also assisted on the tally. Berg found the back of the net with a one-timer from the left faceoff circle, with an assist from Tyler Dunbar.

Fans got a little extra entertainment late in the second period when multiple skirmishes broke out near the Madison goal at the 18:28 mark.

Muskegon defenseman Bryan Huggins, playing his second game for the team, won the most entertaining fight, landing numerous blows against Madison’s Frank Dovorany, and also earning a five minute major penalty for fighting, a 10-minute misconduct and a game misconduct.

Madison received 29 minutes in penalties for its role in the mini-brawl, while Muskegon received 27.

Madison narrowed the score to 4-3 down the stretch, with goals by Gustav Muller at 4:27, Reid Pabich at 8:37, and a late tally by Ryan Kirwan with 50 seconds remaining, after the Capitols had pulled their goalie for an extra attacker.

But Muskegon’s Cam Knuble ice the victory with an empty-net goal with 20 seconds left on the clock.

“I didn’t think we had a clean ending,” Hamilton said. “Lately we just haven’t had many wins, and we had three icings (in the third period), so there is something to learn from that, but at the end of the day I thought we competed well and we converted.” 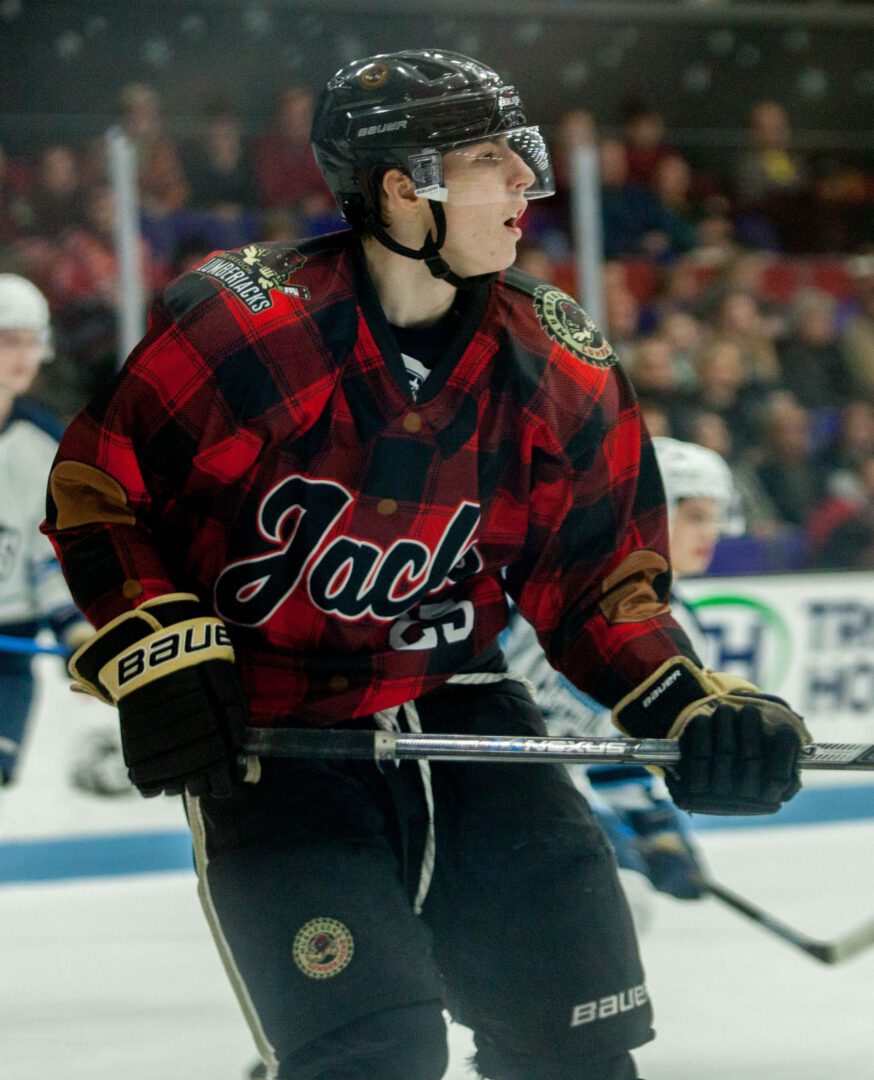 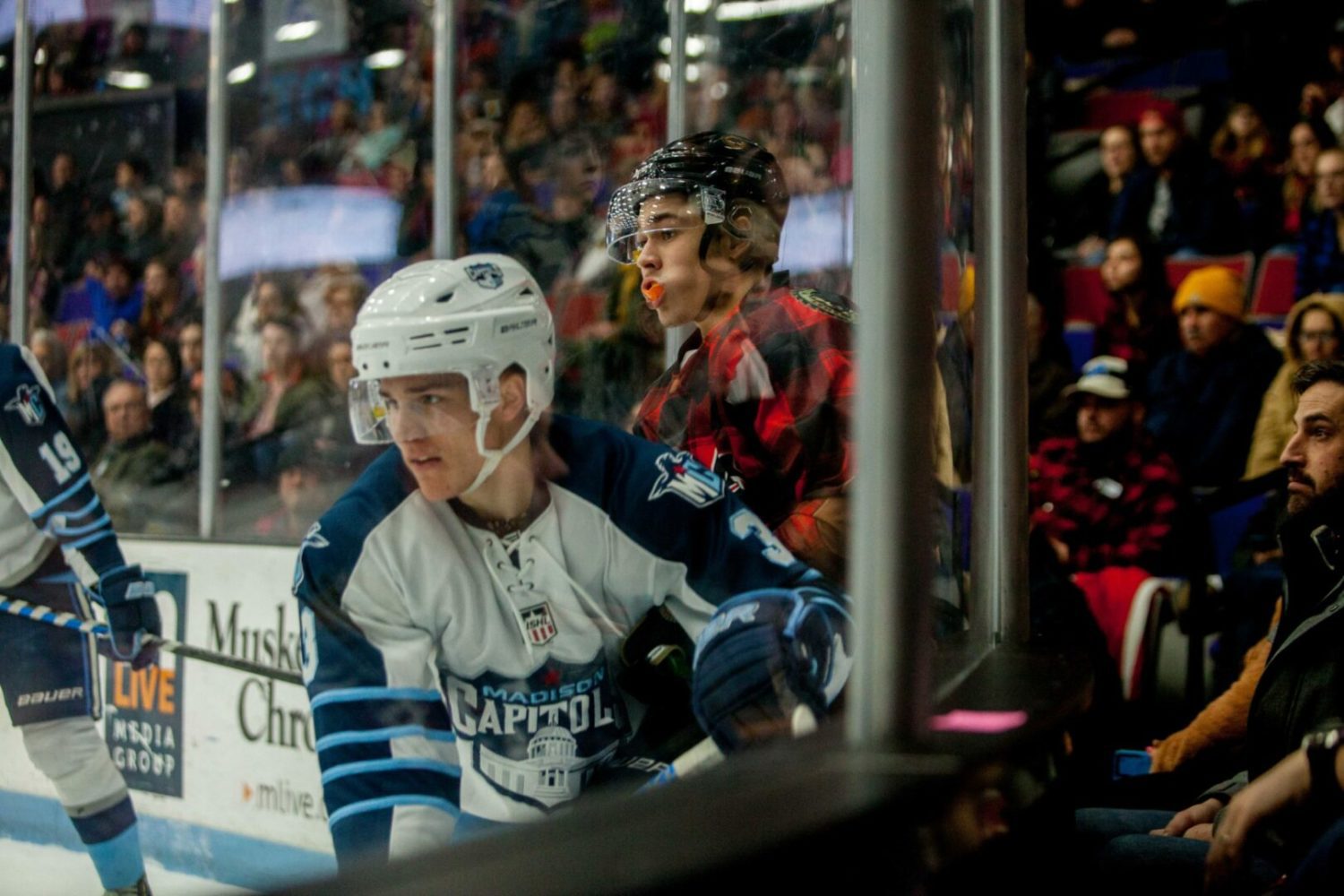 Muskegon’s Danil Gushchin watches the puck after sending it along the boards in front of Madison’s No. 3 Jan Stibingr. Photo/Jason Goorman 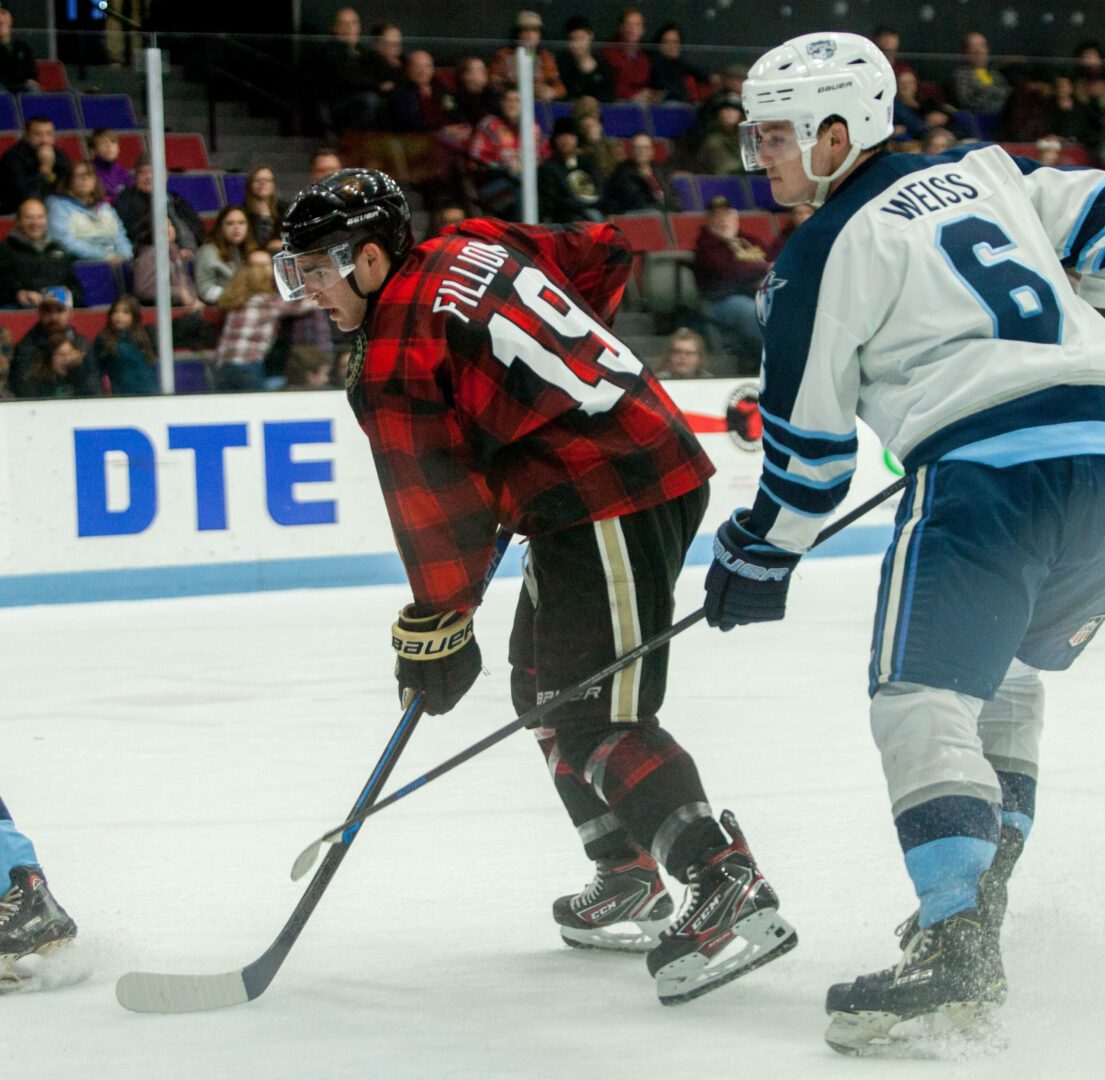 Christophe Fillion stands near the front of Madison’s net as Hunter Weiss wraps up his stick. Photo/Jason Goorman 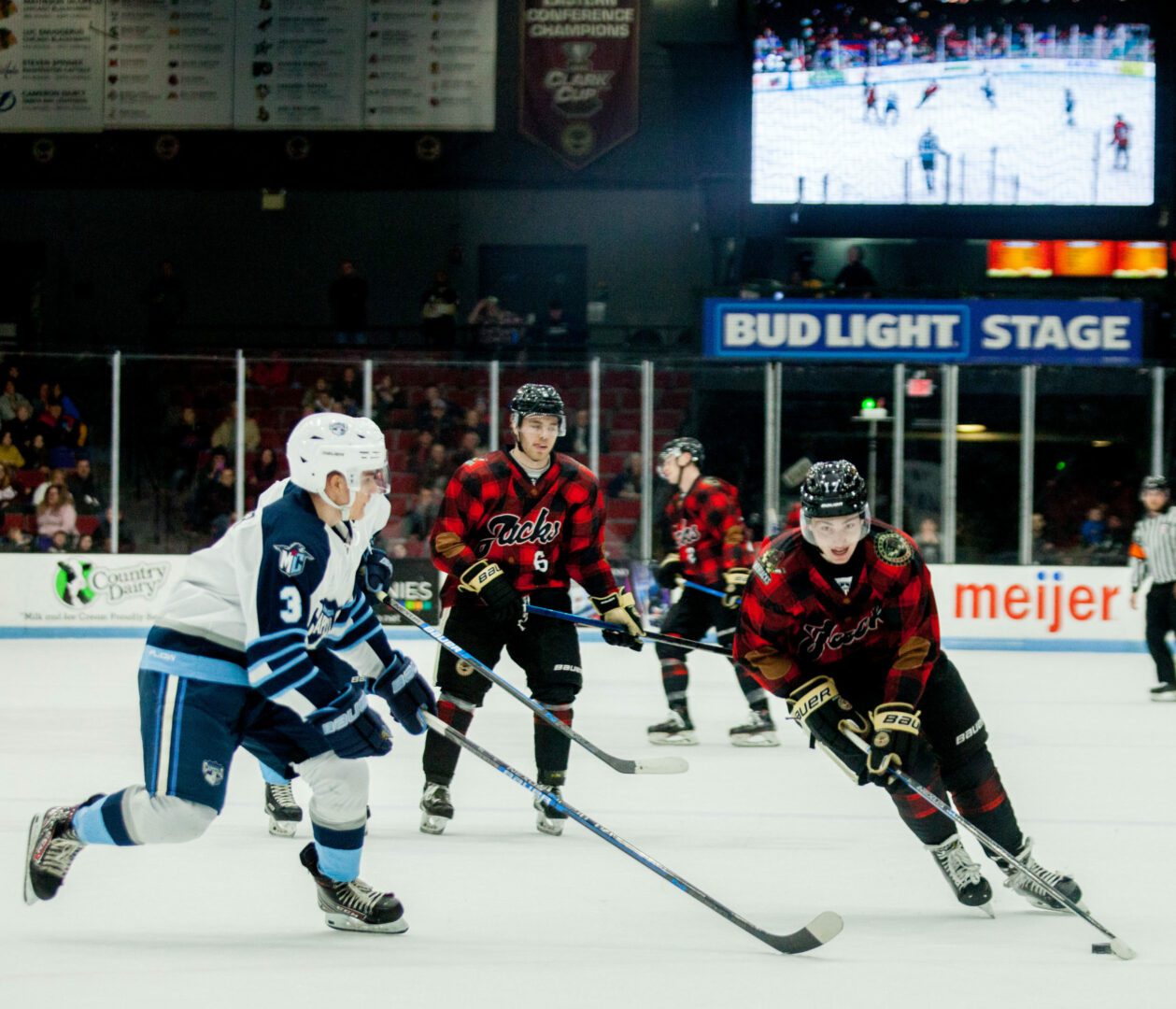 Cameron Berg looks to go around Madison’s No. 3 Jan Stibingr just after the whistle. Photo/Jason Goorman 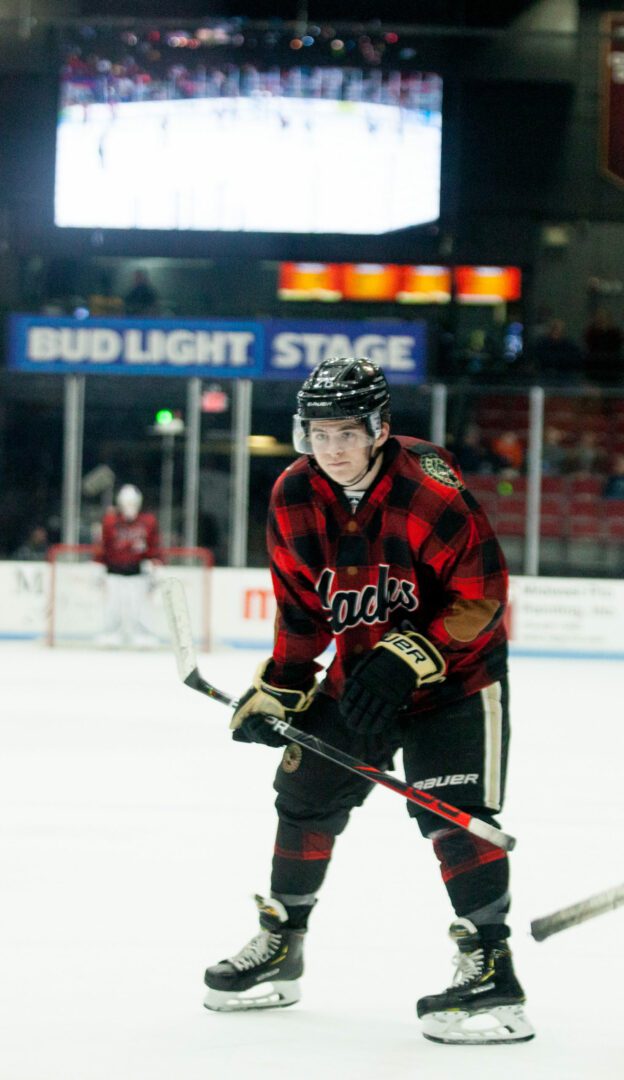 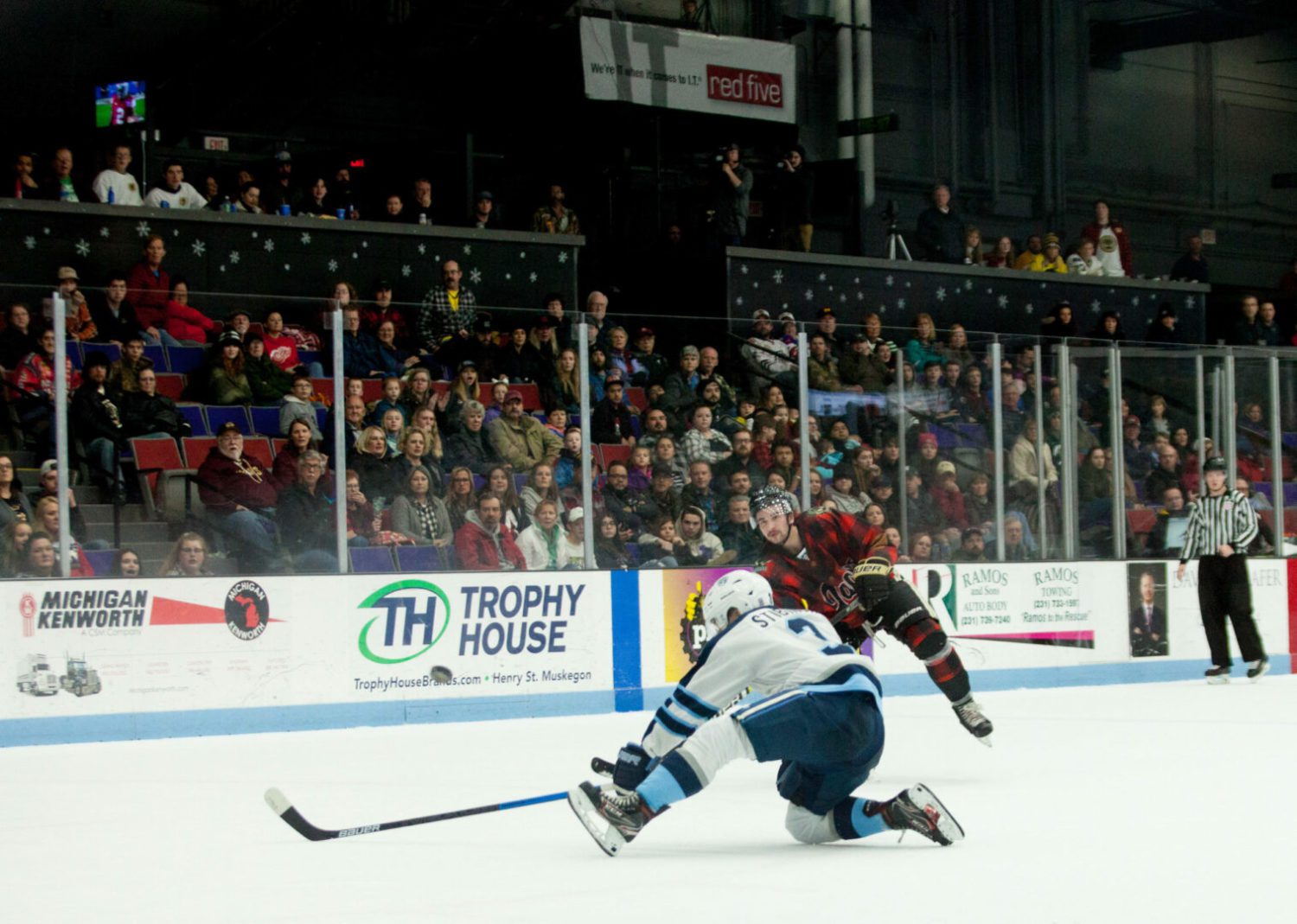 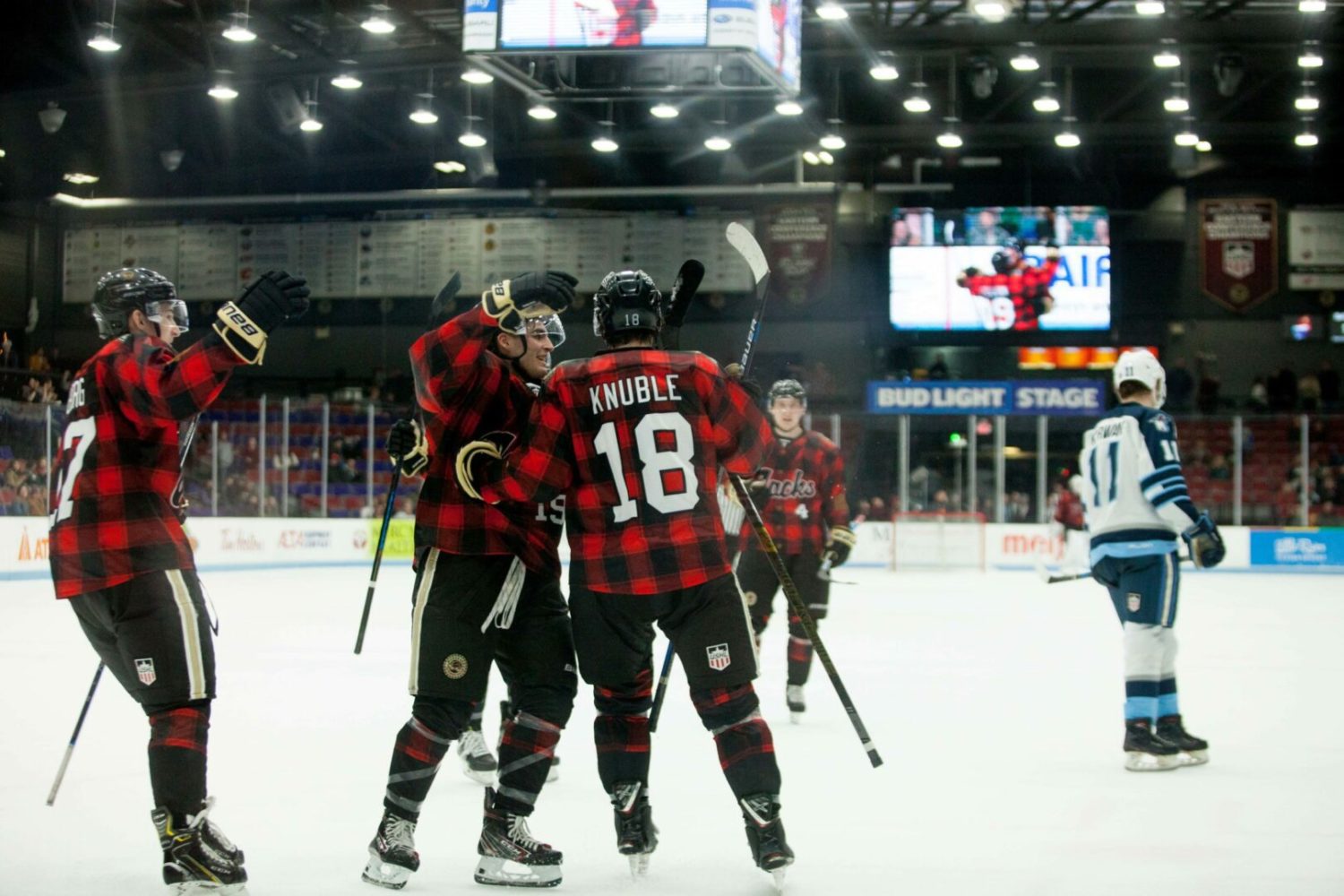 Fruitport prepares to induct its 2015 Hall of Fame class

Grand Haven boys basketball team goes to 3-1 with a victory over St. Joseph