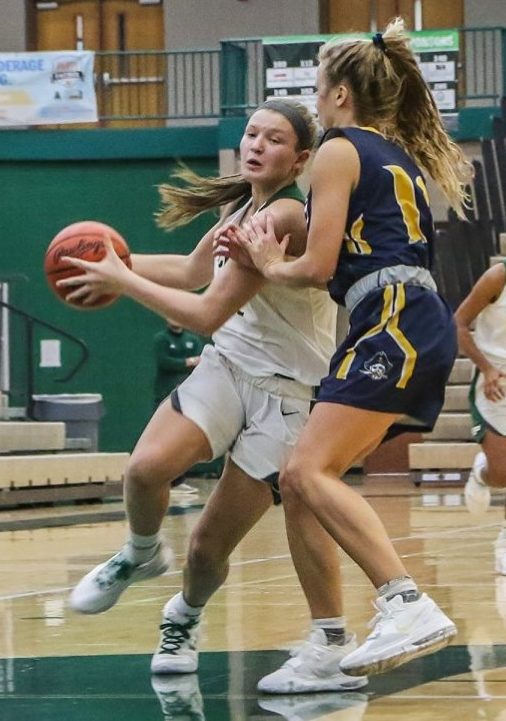 “I had no interest in playing at all,” she said with a laugh.

She’s even come a long way since her freshman season in 2017 at Reeths-Puffer High School, when she led the team in scoring in the district championship game against rival Mona Shores.

Ross was crushed after the 50-42 loss and took the blame, without realizing she was the key player that kept the Rockets within striking distance against a Mona Shores backcourt that featured a pair of future Division 1 college recruits.

Now in her senior season, Ross’ career on the hardwood has come full circle. She had made a commitment to play at the college level starting next year, and has reached a milestone that few high school players achieve.

The Rockets’ outstanding 5-foot-10 guard/forward topped the 1,000-point career mark during the team’s second game of the season against Greenville on Dec. 6, a moment that she admitted was extra special.

“I was super excited,” she said. “They stopped the game and swapped out the balls. I think (the school) is going to get it engraved for me.

“It’s always been a goal that I’ve hoped to reach in the back of my head, but for me, I’ve just gone out and played each game and let whatever happens happen.”

In another special moment, Ross finalized her college decision during a ceremony at Reeths-Puffer on Nov. 13, where she signed her national letter of intent to play at Ferris State University. 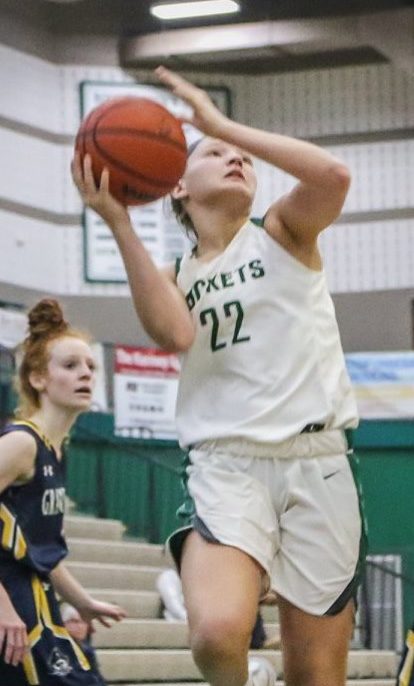 “I wanted to go to a school where I could make an immediate impact,” she said. “And somewhere where it felt like the team was a family. Plus, it’s close to home so my family and friends can come and watch me.”

So how did the young girl who once despised basketball grow to have it become such a tremendous part of her life?

“Neither of my parents (Brent and Kim Ross) played, and my brother (Blake) didn’t, either. He wrestled.” Ross said.  “It was really my cousin, Kaleb Mitchelson and his dad, Tim, who really pushed me into getting better.”

Kaleb Mitchelson has developed into an outstanding player himself as a point guard for Reeths-Puffer’s varsity boys basketball team, helping lead the Rockets to a 17-6 record a year ago, one of their best finishes in nearly a decade.

Kaleb’s shooting and driving ability are also two key strengths of Ross, who a year ago averaged 19.5 points, 7.4 rebounds, 3.1 assists and 3.1 steals per game. She shot nearly 37 percent from beyond the 3-point line and was an 81 percent free-throw shooter.

Her senior season started with a sense of uncertainty. Just a week before practice was set to begin, longtime Head coach Brandon Barry unexpectedly resigned from the position, meaning Ross would have a new coach for the first time at the varsity level.

“I was kind of surprised, but we had been hearing some things for a few weeks,” she said. “We all realized we just had to push forward with Coach Rodney.” 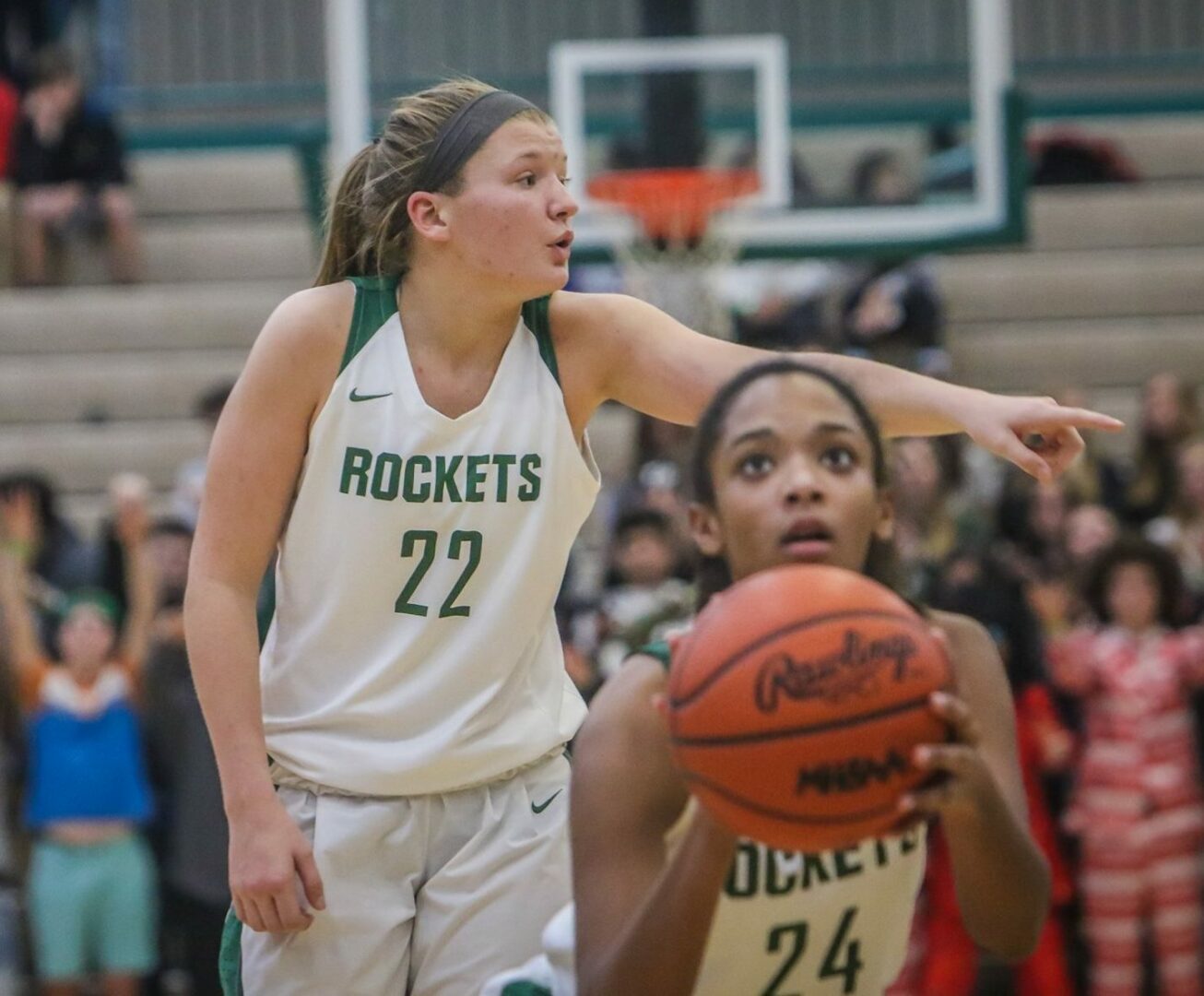 “Coach Rodney” is Rodney Walker, who was hired to become the Rockets’ new coach in mid-November, just five months after he resigned from the varsity girls head coaching position at rival Muskegon High School.

Walker said he had no plans of coaching this season, but when the position opened up, he felt it was an outstanding opportunity, particularly since he’d have the chance to coach his daughter, Ariel Walker, who is a freshman at Reeths-Puffer.

Getting a chance to coach a talent like Ross did not weigh on his decision, Walker said, but it was obviously a nice perk. Now, instead of having to game plan against her, like he did at Muskegon, Walker’s job is devising plans to make her better.

“There’s been no surprises with her,” Walker said with a laugh. “I’ve watched her since she’s been a freshman, so I’ve always known she’s really good. She’s always a force and I’ve had to game plan against her.”

Through the Rockets’ promising 4-0 start this season, Ross has been outstanding in the team’s more up-tempo offensive attack, averaging 27 points per game, and also a defensive force in their full-court trapping scheme. Walker said he’s been impressed with Ross and fellow senior Trina Lewis, who have stepped up as vocal leaders, encouraging teammates in good and bad moments.

Ross isn’t too shabby with the basketball in her hands, either.

“Her court vision is tremendous,” Walker said. “She sees the whole court. Her basketball IQ is great. I think her biggest asset is she understands the moment. If teams go to a box and 1, she recognizes it right away. She makes winning decisions.”

Ross said she’s developed her game by going to Basketball Basics clinics in Grand Haven, playing AAU basketball with the Grand Rapids-based Michigan Basketball Academy, and from the constant encouragement from her teammates. She hopes all the time and effort she’s put in will help the Rockets break their district title drought in March.

The Reeths-Puffer girls have not won a district championship in Ross’ three prior seasons of varsity. That includes last year, when the Rockets lost to Coach Walker’s Muskegon team in the Division 1 district finals.

“Each year after we’ve lost, it just drives us more and more,” she said. “Last year, it really set a fire in us. It pushes us each and every day at practice to work harder.”

Lumberjacks have first losing streak in two months after falling in Chicago, 6-2