MUSKEGON TWP. – Muskegon head coach Keith Guy told senior Jarvis Walker he would still love him, whether he made or missed his

The idea was to try to take some pressure off Walker, with a big victory hanging on his shots, and it might have worked.

Walker sank both go-ahead free throws with 3.8 seconds remaining, lifting the Muskegon Big Reds to a thrilling 52-50 victory over East Kentwood in the third and final game of the Muskegon Area Sports Hall of Fame Classic at Reeths-Puffer High School.

“I told him make it or miss it, I love you,” Coach Guy said after the game. “I said I really don’t care. We got no pressure. We go to overtime, so be it. Don’t put pressure on yourself, you’re built for these moments.” 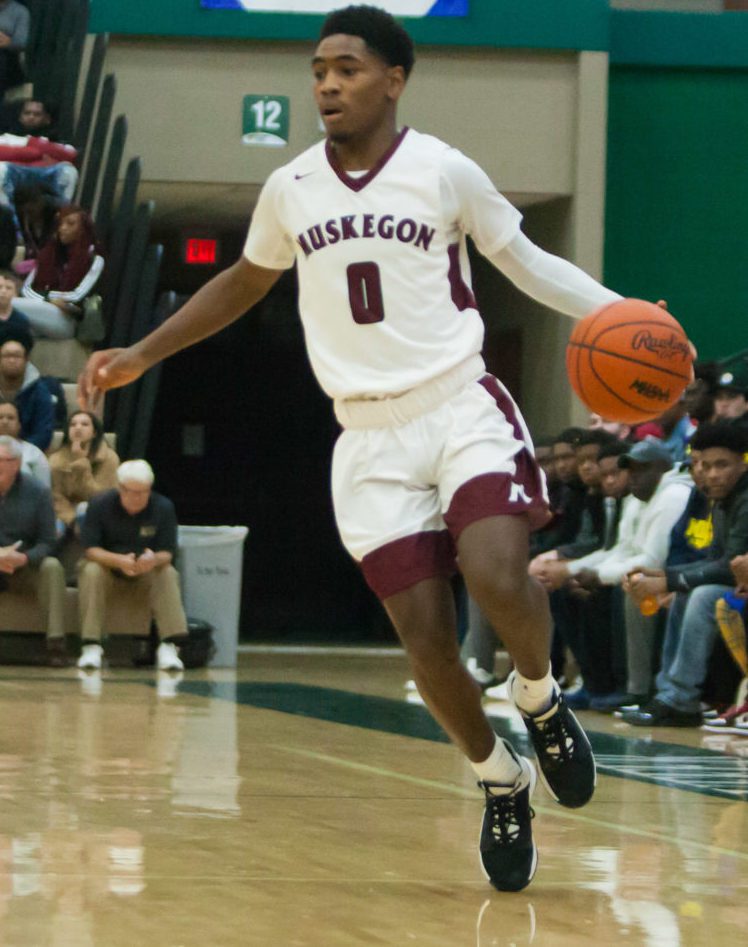 Vern Nash III takes the ball up the floor for Muskegon. Photo/Jason Goorman

With 1:25 left in the fourth quarter and the score tied 50-50, Muskegon an the clock down to 9.5 seconds, then Guy called time out and set up a final play.

Walker received the inbounds pass, drove to the top of the key and drew a foul with 3.8 seconds left, sending him to the line to shoot for the win.

The star senior said he loves to have the ball in pressure situations, with big games hanging in the balance.

“It’s humbling,” said Walker, who finished with a game-high 19 points. “But it’s fun. It’s an unexplainable good feeling really. I look forward to moments like that.

The first half was a bit rough for the Big Reds, who gained revenge for a loss to East Kentwood in the regional semifinals last year.

They trailed 16-11 after one quarter. Vernon Nash III and Lamar Lee each had three points for Muskegon.

Muskegon trailing 29-23 going into the locker room. Zy’Kier Davis paced the Big Reds with six points in the second quarter. 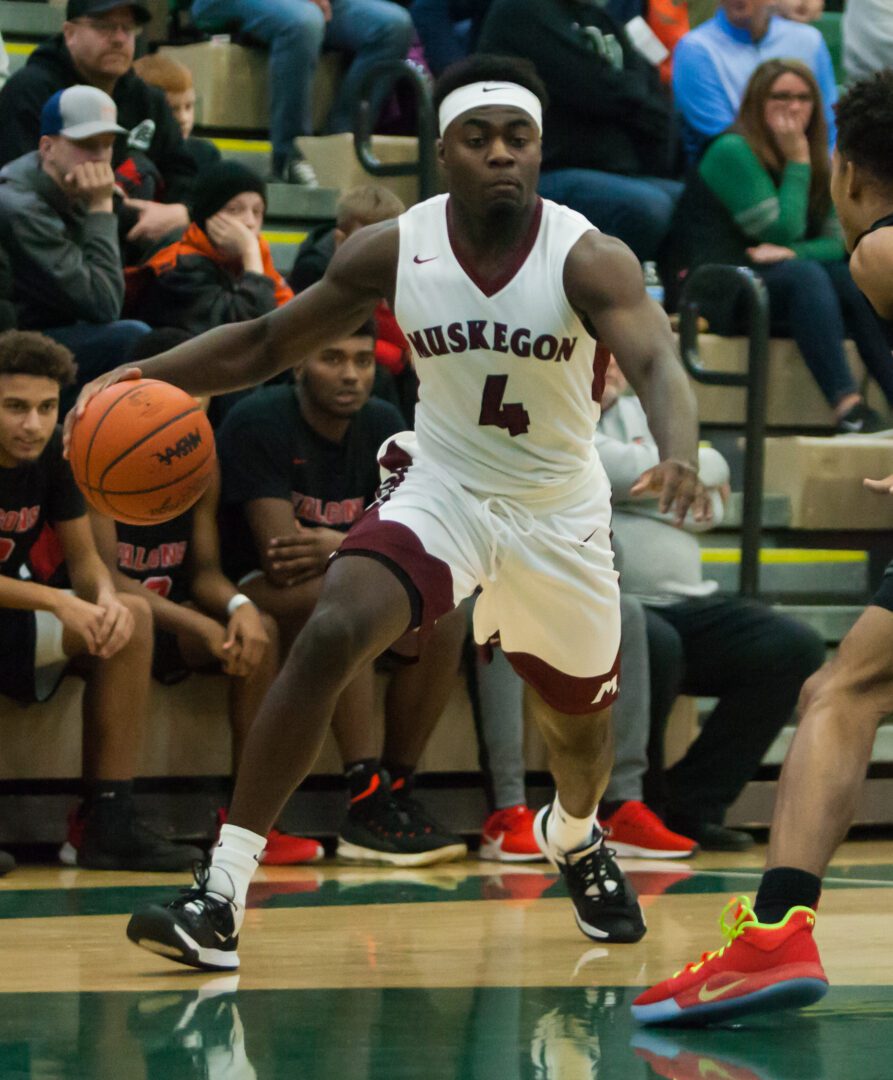 Walker got going in the third quarter, pouring in eight points and helping the Big Red crawl within one point, 39-38, headed into the fourth.

“We wanted to get him and Vernon (Nash) going,” Guy said about his two top scorers. “I thought Vern pressed a little bit and Jarvis wasn’t going hard enough, so we tried to get both of them going.”

In the fourth quarter, Walker hit a two-point shot and a free throw to put Muskegon ahead at 41-39 with 6:57 left.

The two teams traded baskets back-and-forth before Walker ultimately sealed the victory with his free throws.

Davis finished with nine points while Nash had a quiet night with five.

East Kentwood was led by Ja Shon Large with 19 points and Ja’moni Jones with 13.

Muskegon is now 2-0 on the season and will next host Chicago Curie next Saturday with game time scheduled for 7 p.m. 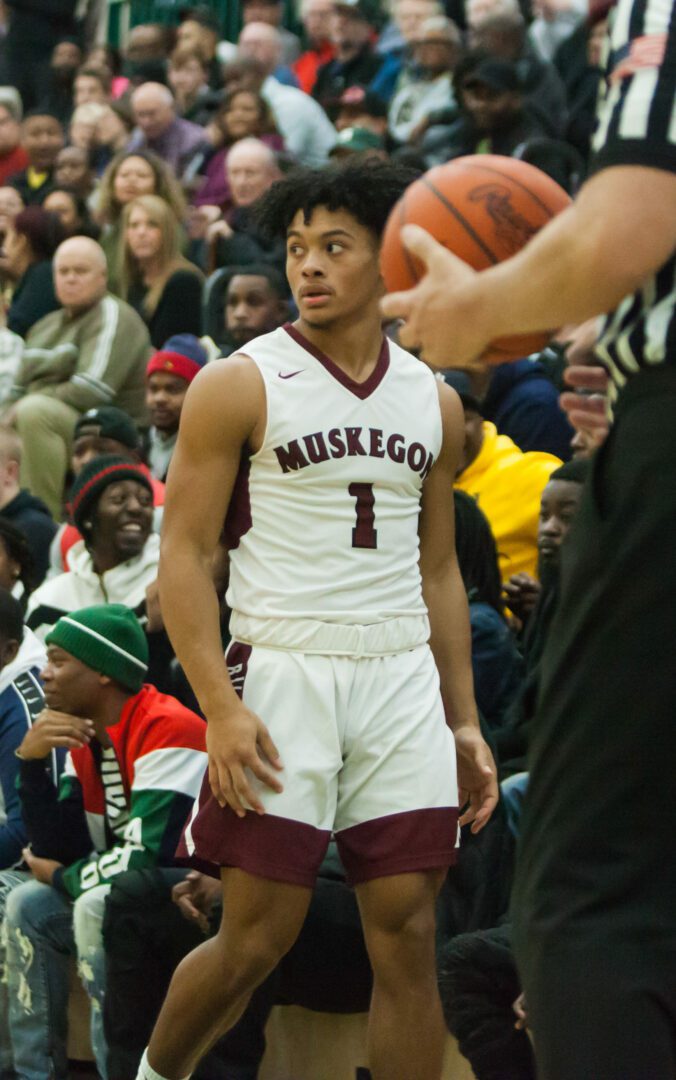 Cam Martinez looks across court before taking the ball out of bounds for Muskegon. Photo/Jason Goorman 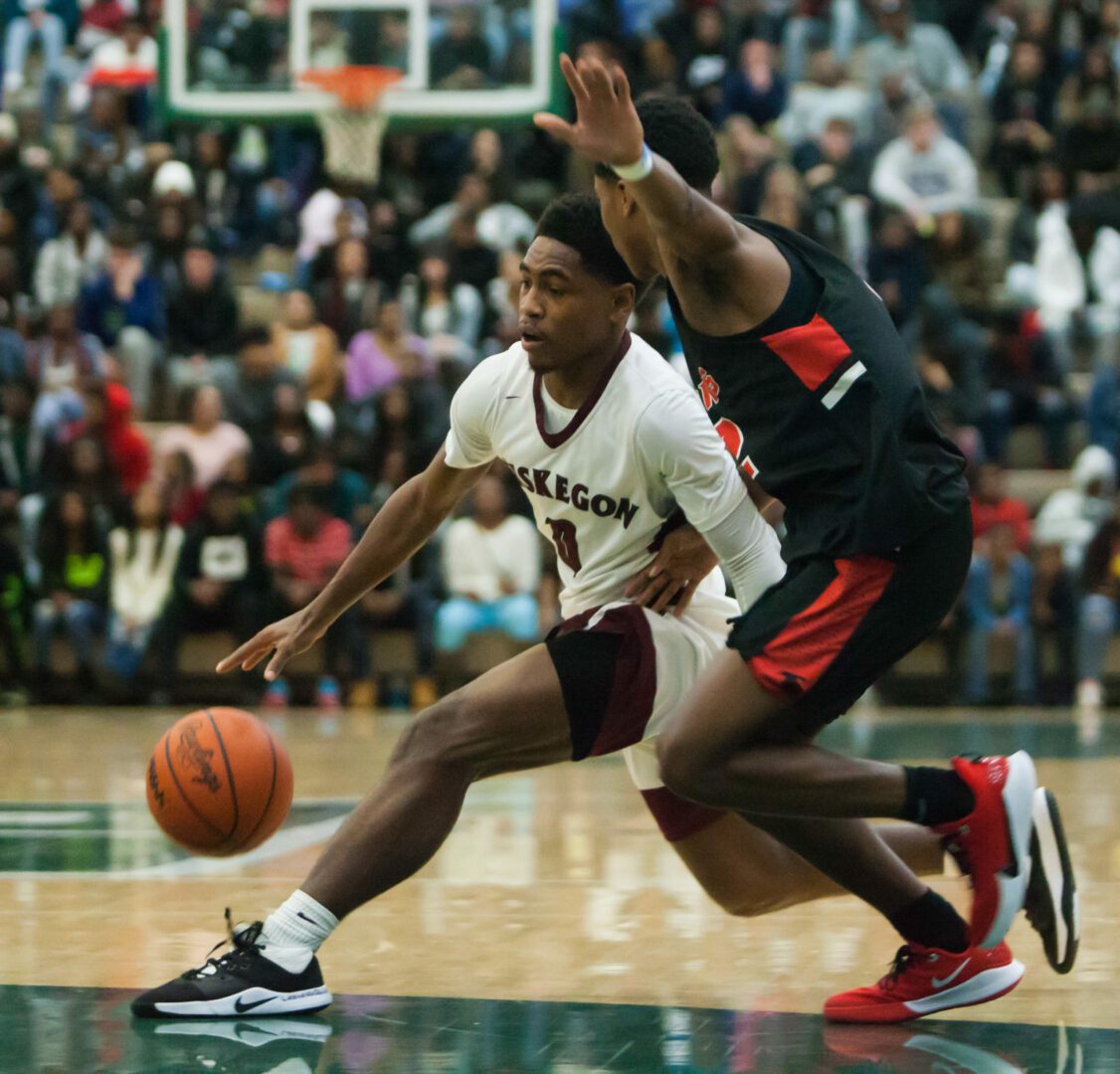 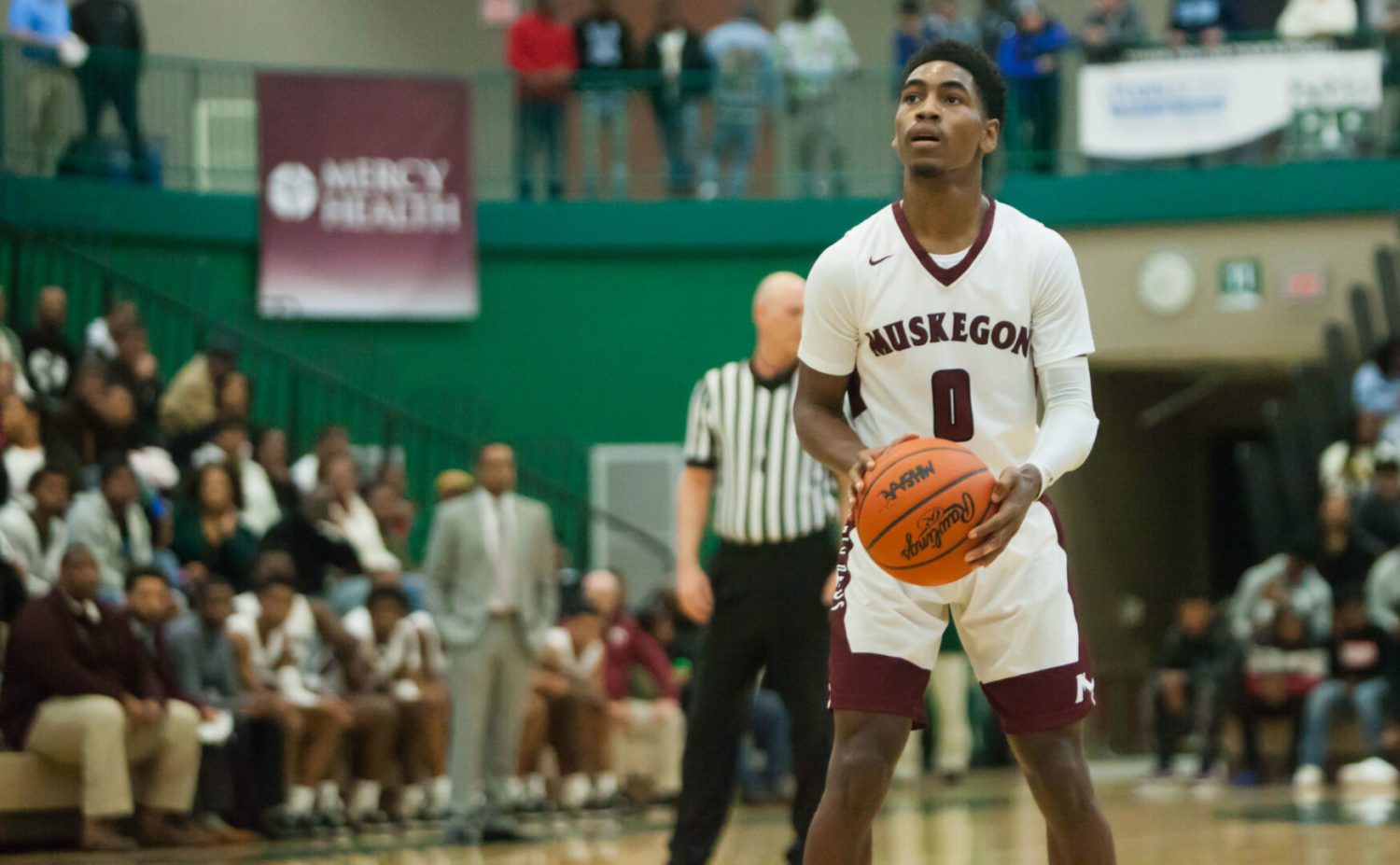 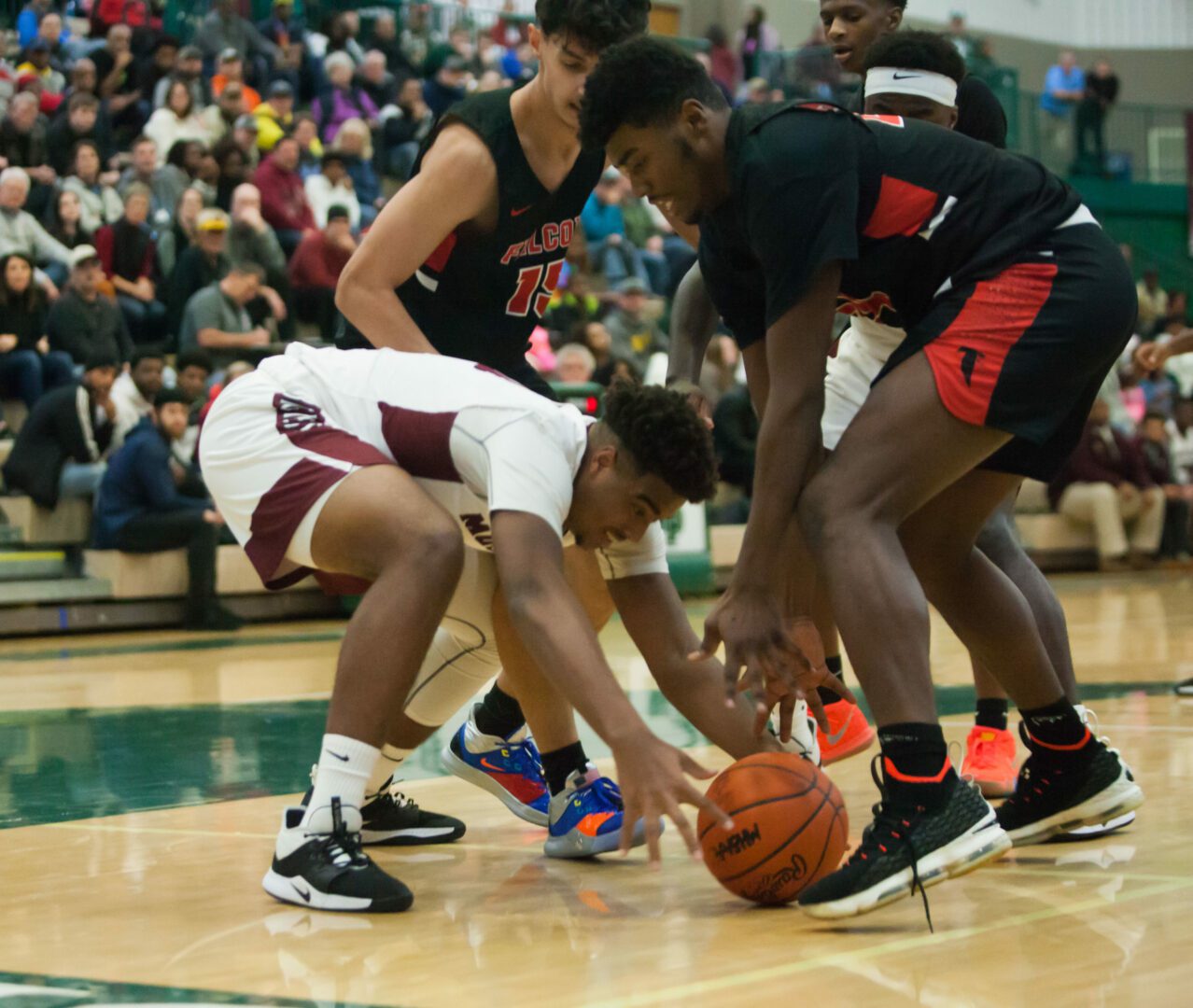 Muskegon’s Jordan Porter gets ready to get on the floor. Photo/Jason Goorman 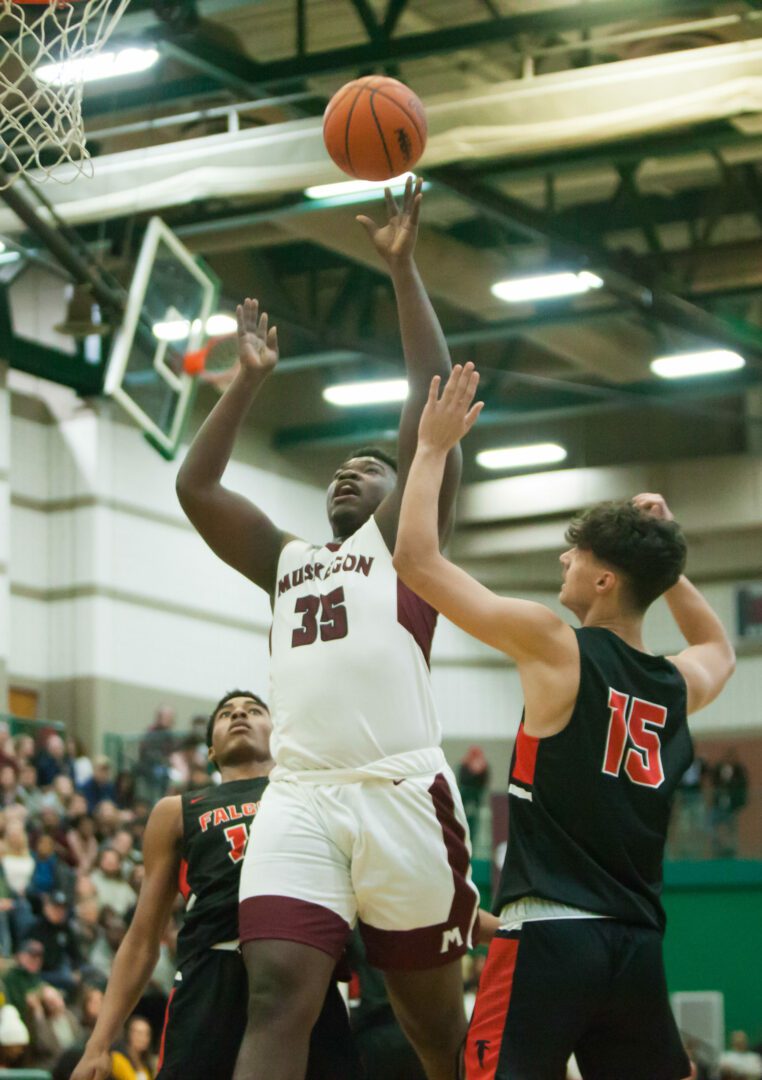 Billie Roberts takes a shot in the post for Muskegon. Photo/Jason Goorman