MUSKEGON TWP. — Rodney Walker coached the Muskegon girls basketball team to plenty of wins in his years as head coach, including a 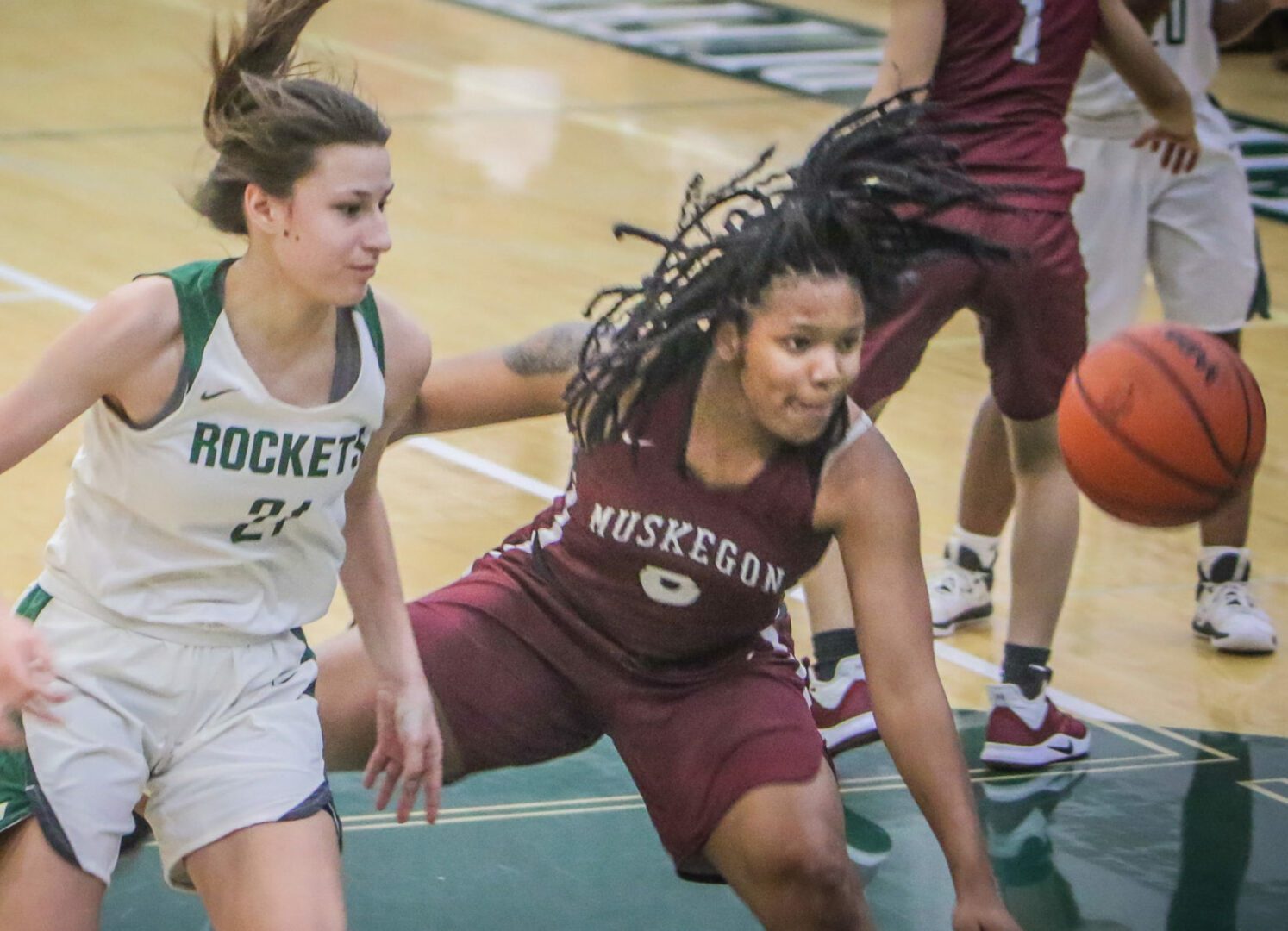 Reeths-Puffer’s No. 21 Sophia Hekkema gets the pass tipped away by JaKayla Anderson. Photo/Joe Lane

On Friday night, he experienced what it’s like to be on the other side of a Big Reds win when the Muskegon girls topped Walker’s Reeths-Puffer squad 73-63 on the Rockets’ home floor.

Muskegon improved to 6-4 overall and 2-0 in O-K Black Conference play. Reeths-Puffer dropped to 8-2 overall and 1-2 in the conference.

Walker resigned from the Muskegon job after last season, then took over the Reeths-Puffer girls when longtime coach Brandon Barry stepped down shortly before the season began.

Muskegon coach Paris Thomas knew her players would have a lot of emotions playing against their former coach, buts she told them a simple phrase to keep them focused.

“My girls took this game very personal,” Thomas said. “We went in there and put ‘intelligence over emotions.’ We reminded them that we need to stay here (mentally).

“At the beginning I reminded them this is not the only game. It’s not the championship game. We don’t need to get too high on those emotions, but we need to play Big Red ball. I think for the most part they did that.” 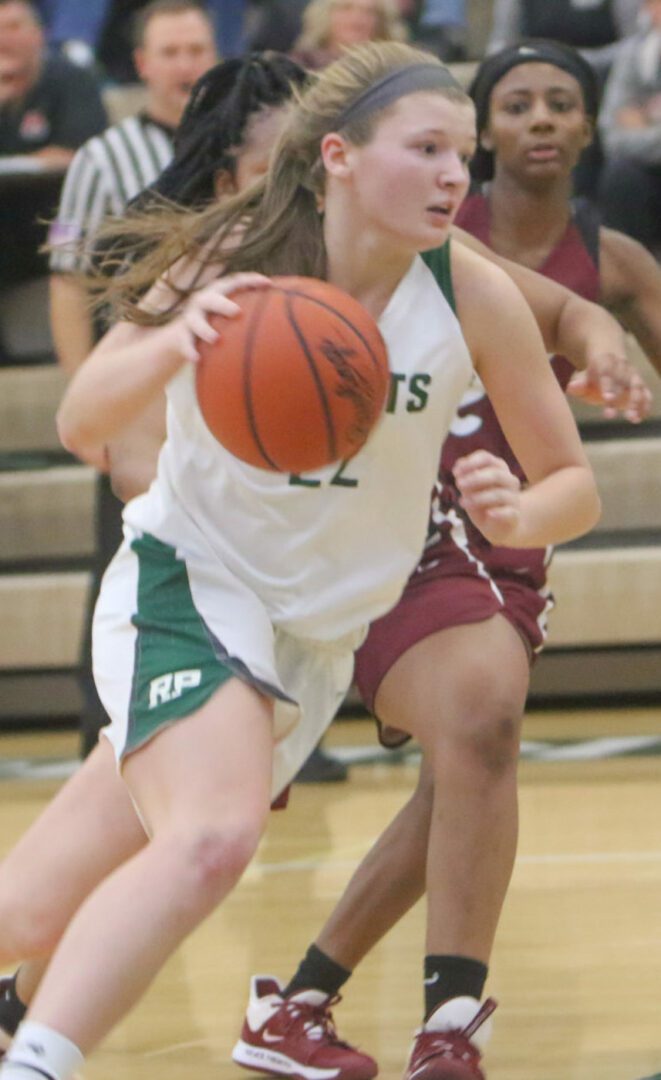 DeShonna Day was a big part of the Muskegon victory, just like she was for many victories under Walker.

Walker said it was difficult going against his former players.

“It’s absolutely weird,” he said. “There are a lot of girls on that side of the ball I’ve spent a lot of time with.

Muskegon stunned the home crowd by racing out to a 14-0 lead in the first five minutes of the game. The Rockets bounced back to get within 18-8 at the end of the first quarter.

Reeths-Puffer drew within five points in the second quarter, but a last-second bucket by Day put Muskegon up seven, 28-21, heading to the half.

Both teams scored well in the third, combining for 48 points in the quarter. The Big Reds stretched their lead to 15 points, 48-33, with 2:09 left in the third before a barrage of Lauren Ross three-pointers cut the Reeths-Puffer deficit to six.

Muskegon’s Jakayla Anderson connected from three for the last basket of the third, putting the lead at 53-44 heading to the final quarter.

The Rockets drew within six points with three minutes left with a 7-0 run to make it 65-59. But Muskegon held strong, ending the game on an 8-2 run after the Rockets closed the gap.

Kailyn Nash led the Big Reds with 23 points on the night. Day totaled 20, Anderson chipped in 13 and Makiya Sones had 10.

Ross led all scorers with 34 points for the Rockets and grabbed eight rebounds. Sophia Hekkema netted 10 points for R-P. 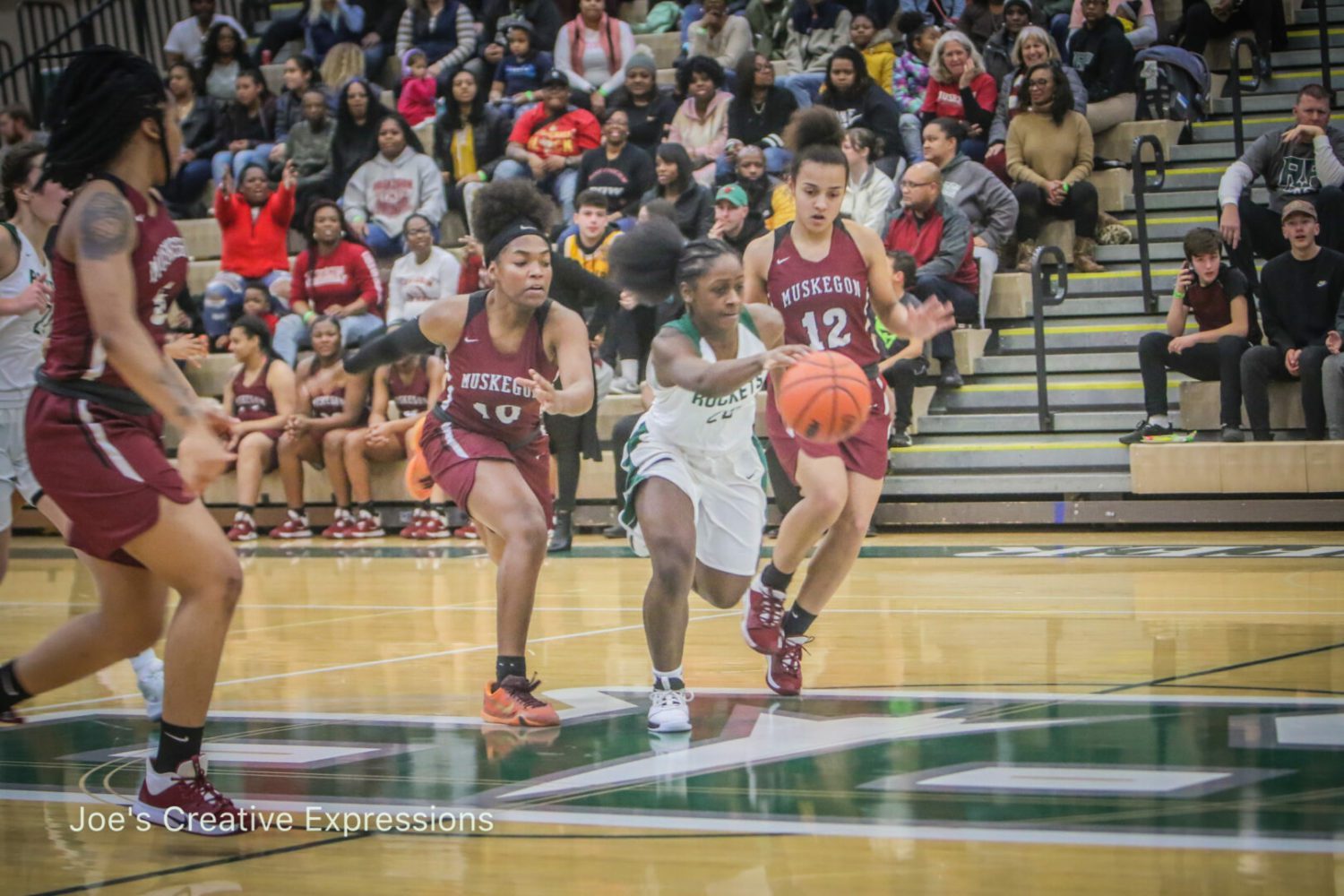 Arriona Williams pushes the ball across half court for Reeths-Puffer. Photo/Joe Lane 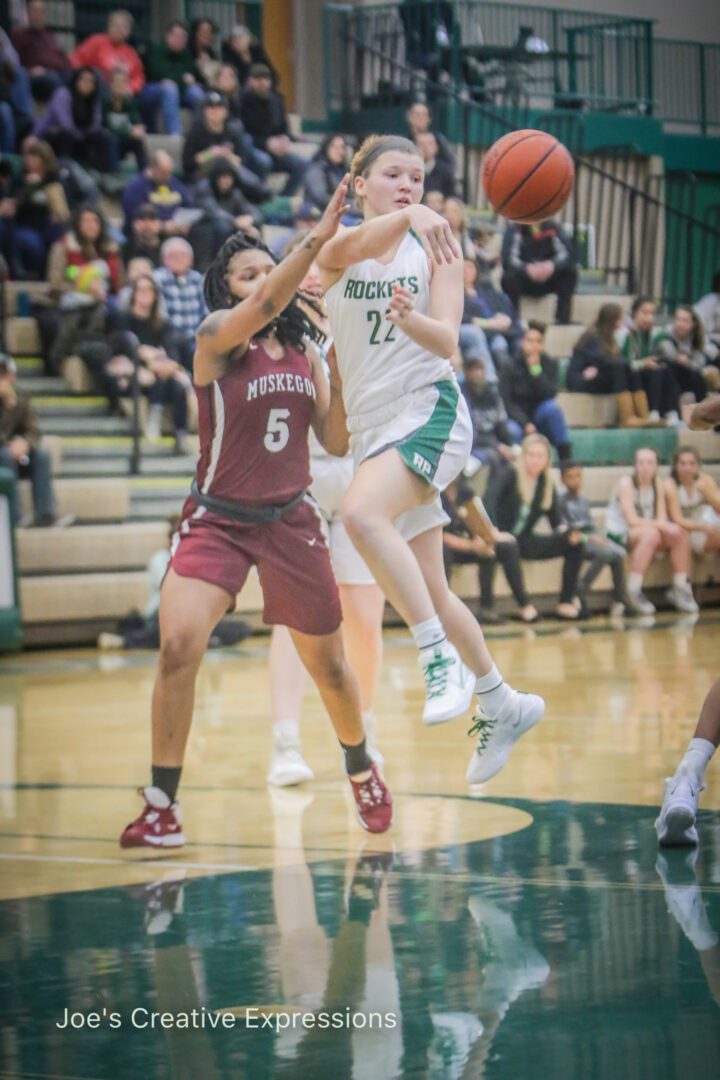 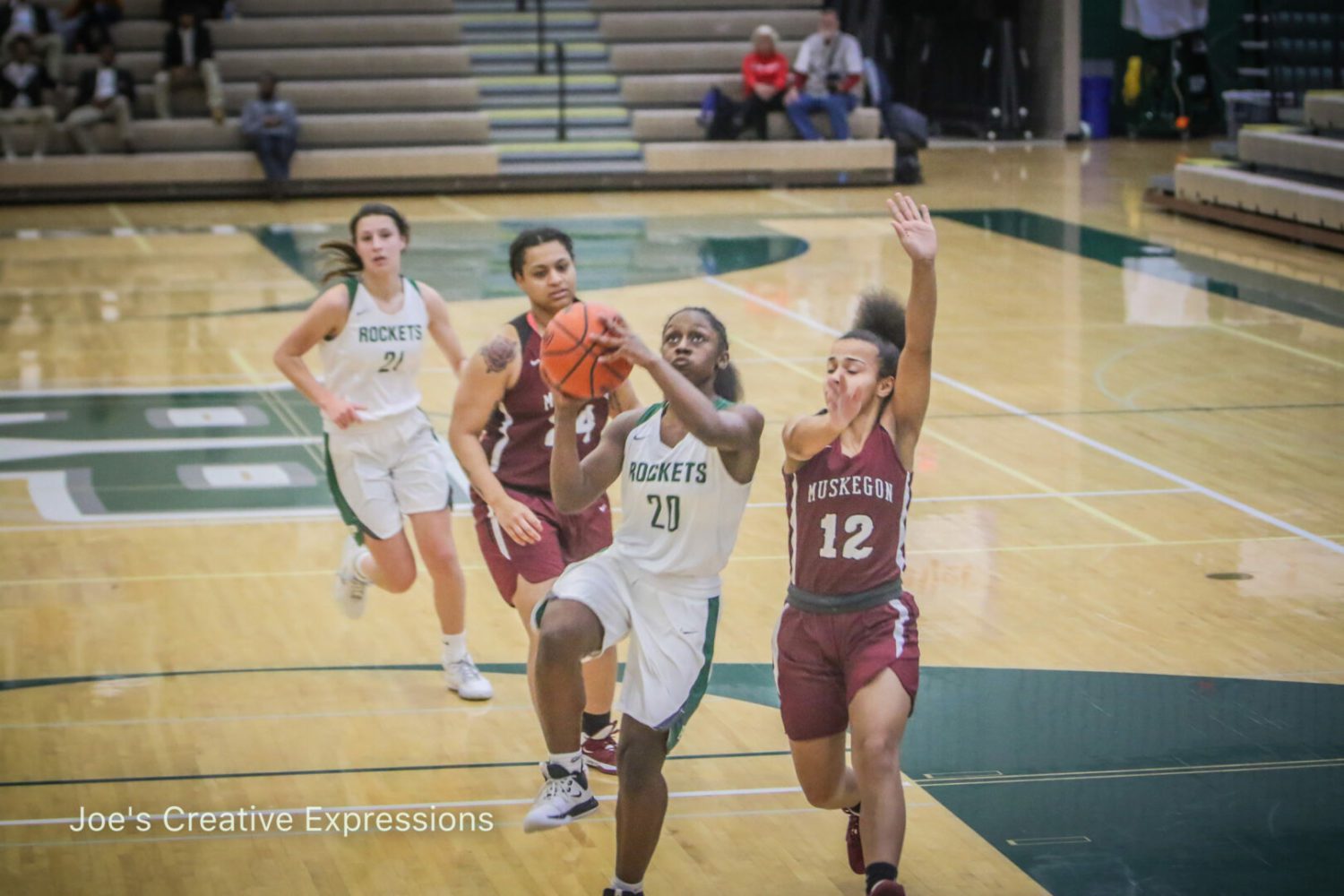 Alayna Hussey goes up for the layup against Muskegon’s No. 12 McKynna Sims. Photo/Joe Lane 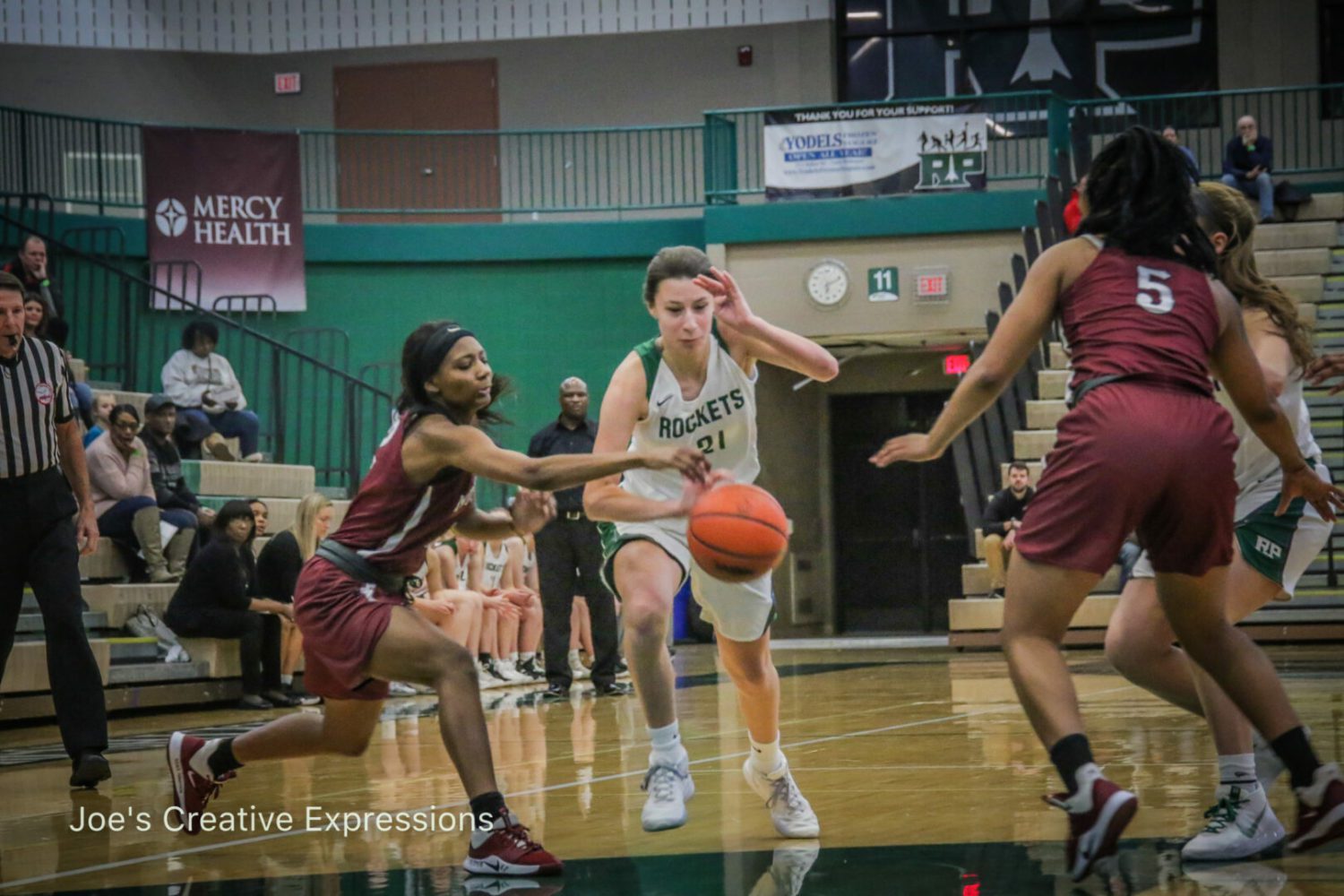 DeShonna Day goes for the steal against Reeths-Puffer’s No. 21 Sophia Hekkema. Photo/Joe Lane