MUSKEGON TWP. — One of the oldest clichés in sports says “It’s not how you start, it’s how you finish.”

Quenten Reynolds goes up for the layup against Reeths-Puffer’s No. 5 Kaleb Mitchelson. Photo/Joe Lane

This phrase has been a de facto motto for the Muskegon boys basketball team, which has faced first quarter deficits in all but one game so far this season.

The Big Reds fell behind again on Friday against rival Reeths-Puffer, trailing 19-9 after one quarter, but dominated the second and fourth quarters to come away with a 60-43 win in a key O-K Black Conference game.

“We’re too inconsistent,” said Muskegon Coach Keith Guy. “I’ve got to do a better job, I guess, figuring this thing out on our starts. We’ve lost the first quarter every game but one. We’re just not locked in, not playing well. We find ourselves in the hole, I guess this group likes to come back.”

“They went to a zone, their 1-2-2 trapping defense,” he said. “That gave us some problems. They did a nice job switching it up. They’ve got a lot of athletes that cover a lot of space. We struggled in that second quarter against that, and they made their run in the second quarter.”

Jarvis Walker winds up the make a pass for Muskegon. Photo/Joe Lane

The Rockets come out of the gate hot, building a quick 15-5 lead in the opening minutes and a 19-9 lead after the first quarter. Senior Emcee Williams provided the early spark with 10 points, including a pair of three-pointers.

The Big Reds flipped the script in the second quarter. After R-P scored the first three points, Muskegon went on a dominating 20-3 run to take a 29-25 lead at the break.

Senior Jarvis Walker led the charge, scoring 11 of his game-high 31 points in the second. His scoring outburst included a trio of shots from behind the three-point line.

“He was locked in, he had that thing on automatic tonight,” Guy said of Walker’s shooting. “He made some tough ones, highly contested.”

“I knew they were doing sort of a ‘no-catch’ on me,” Walker said. “So I knew when I caught the ball to be aggressive. It’s definitely a boost from the jump to see the ball go in the net and to see two of my threes to go in right away. That definitely was a boost to me.”

The Rockets bounced back in the third quarter, taking a 39-37 lead on a Williams triple with 30 seconds left. Then Walker connected for two points just before the buzzer to knot the game at 39-39 heading to the fourth.

The Big Reds took control with a decisive 21-4 advantage down the stretch. The Rockets were 1-for-6 from the foul line and made just one field goal in the final eight minutes. Walker capped his big night with 10 points in the final quarter.

“I think we got kind of tired,” Johnson said. “I only played six guys. I think their depth kind of wore us down a little bit. Our hustle and energy died just a little bit.”

Vern Nash scored 12 points for Muskegon, including a pair of threes, and Lamar Lee added nine. Williams led the Rockets with 18 points, including four triples, and Gary Humphrey III scored 11. 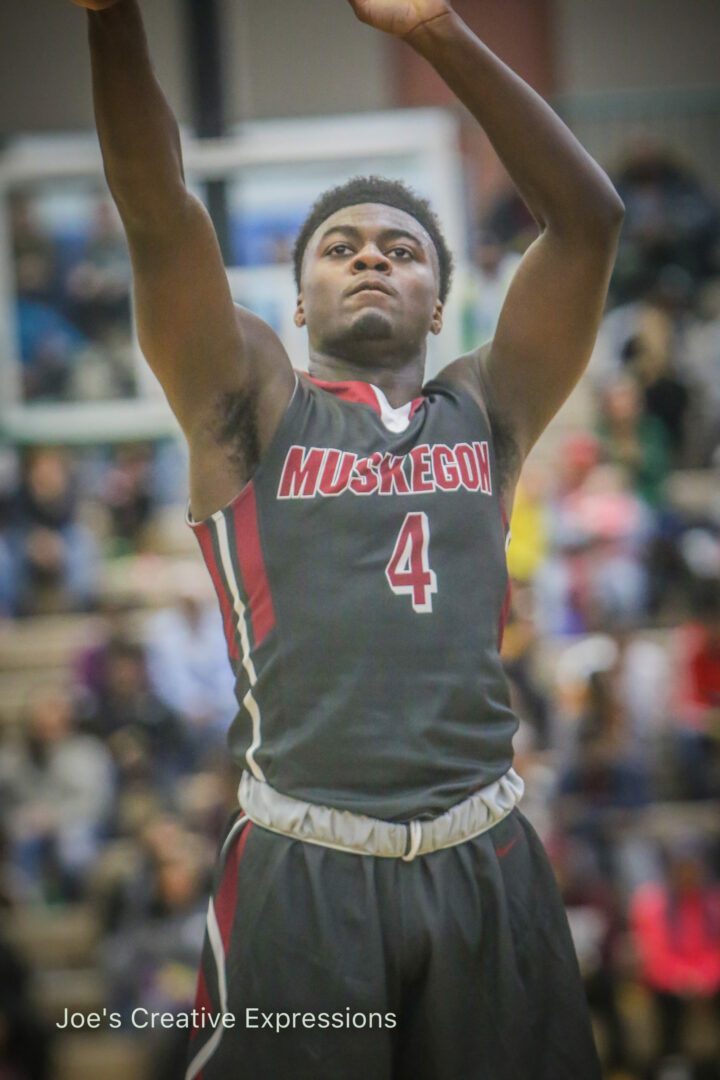 Jarvis Walker follows through on the shot for Muskegon. Photo/Joe Lane 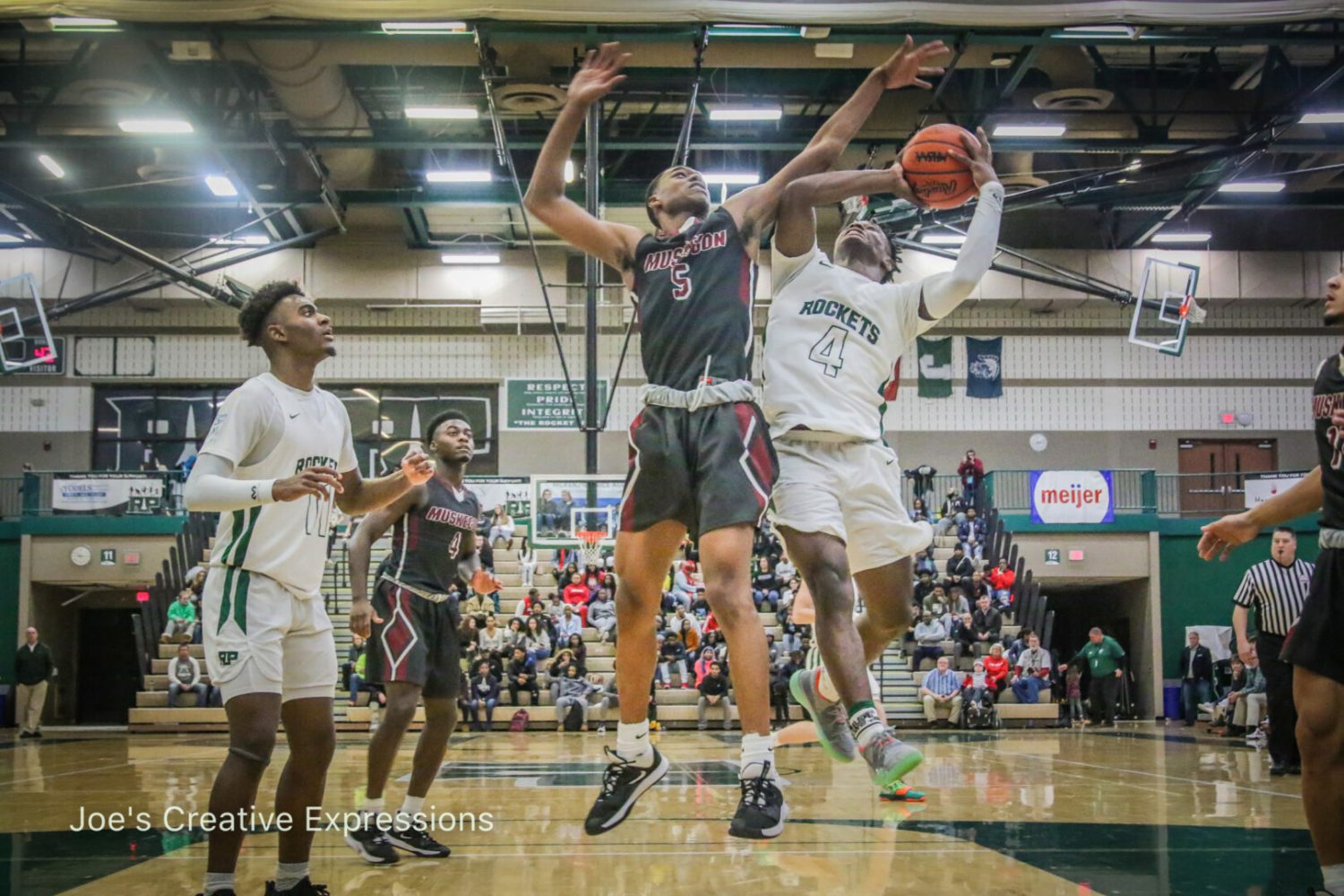 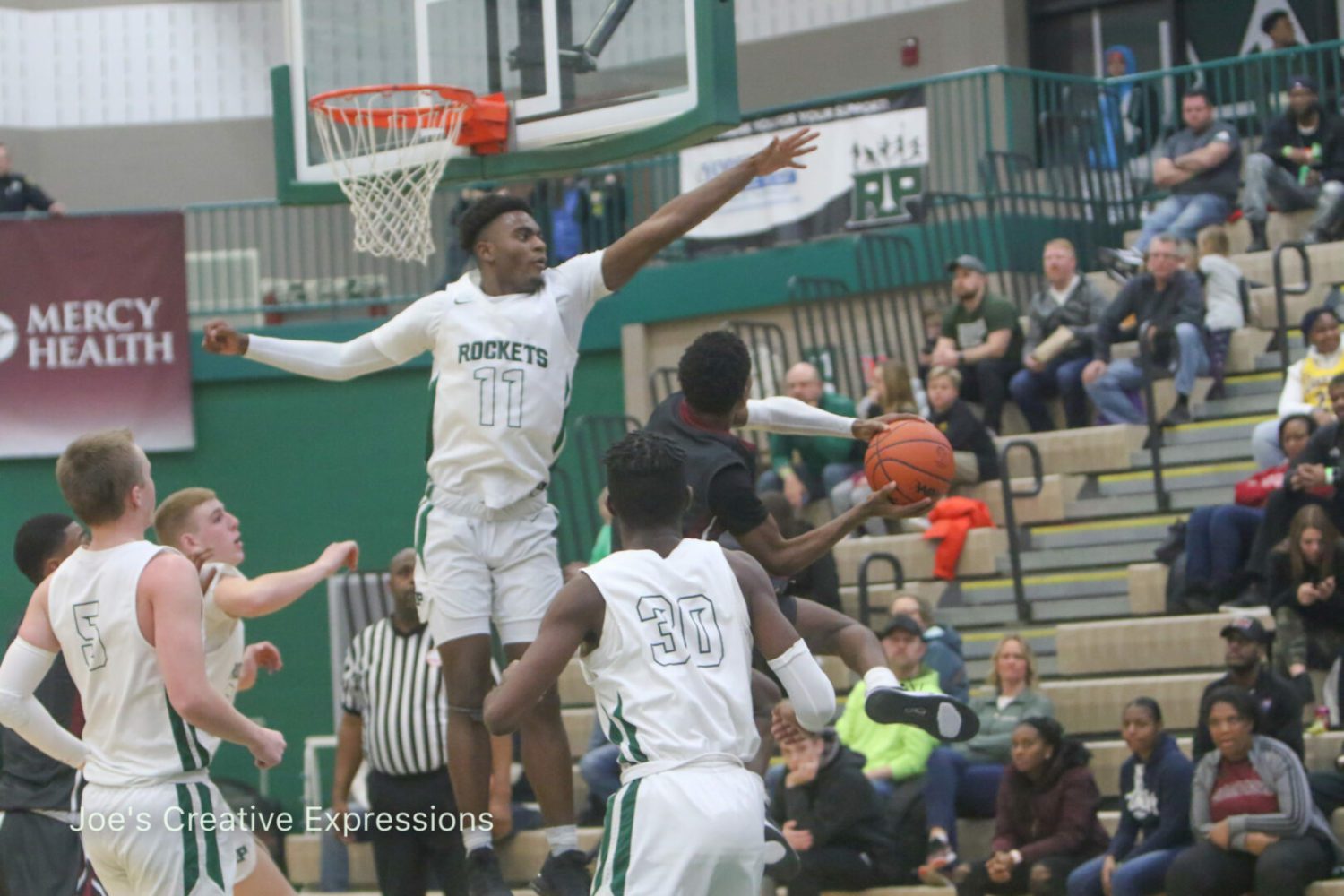 Gary Humphrey III goes up for the block for Reeths-Puffer. Photo/Joe Lane 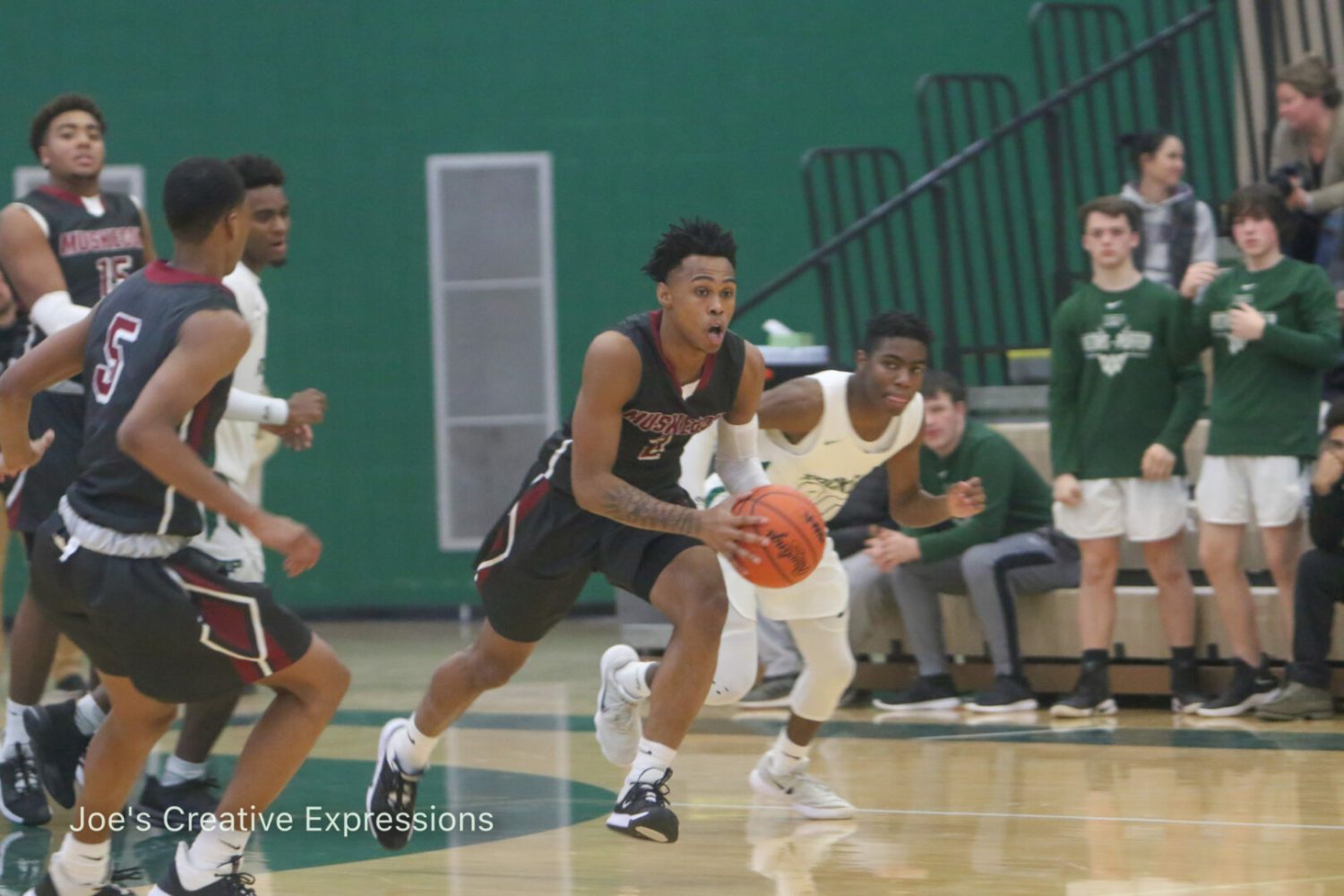 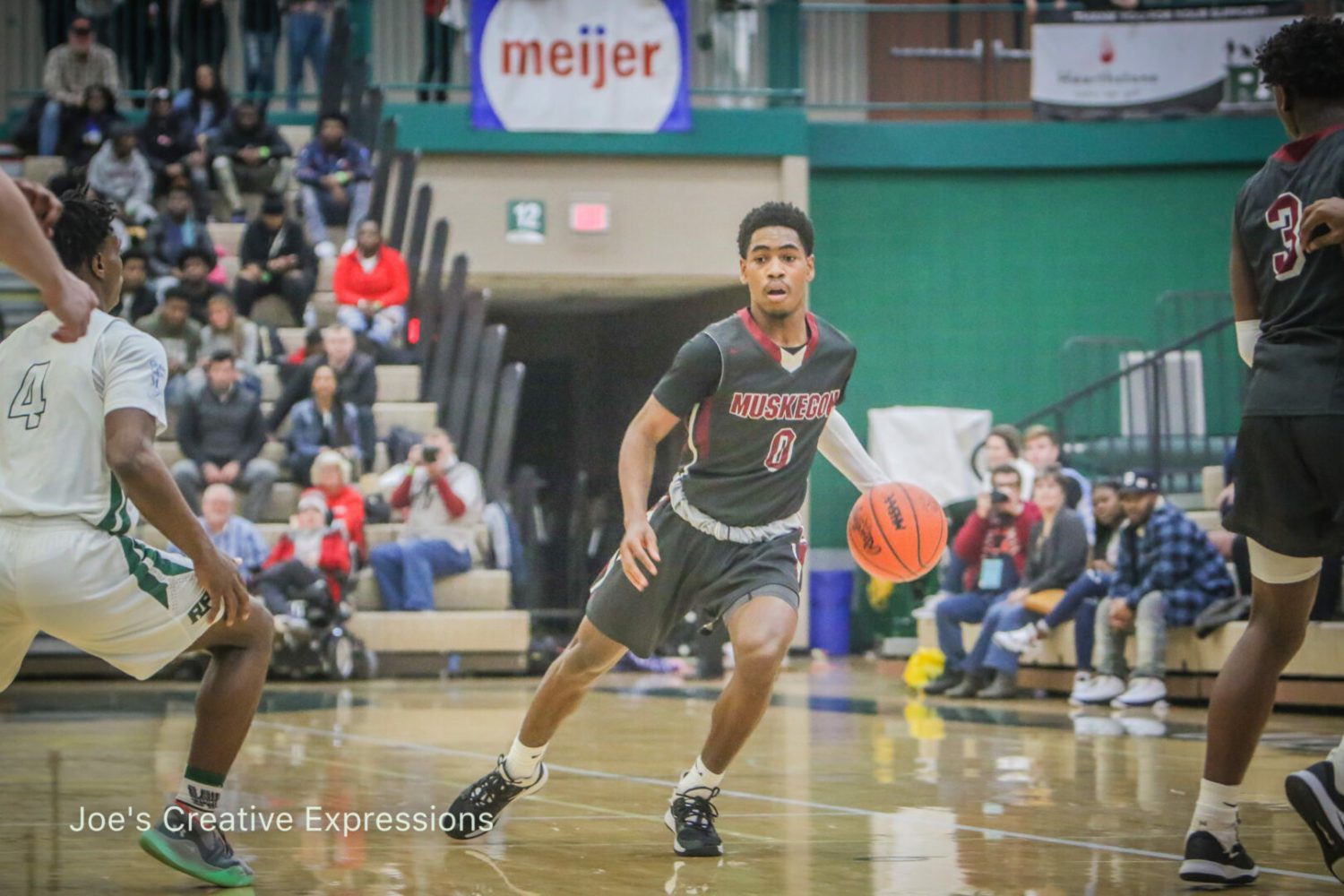 Vernon Nash sets up the play for Muskegon. Photo/Joe Lane 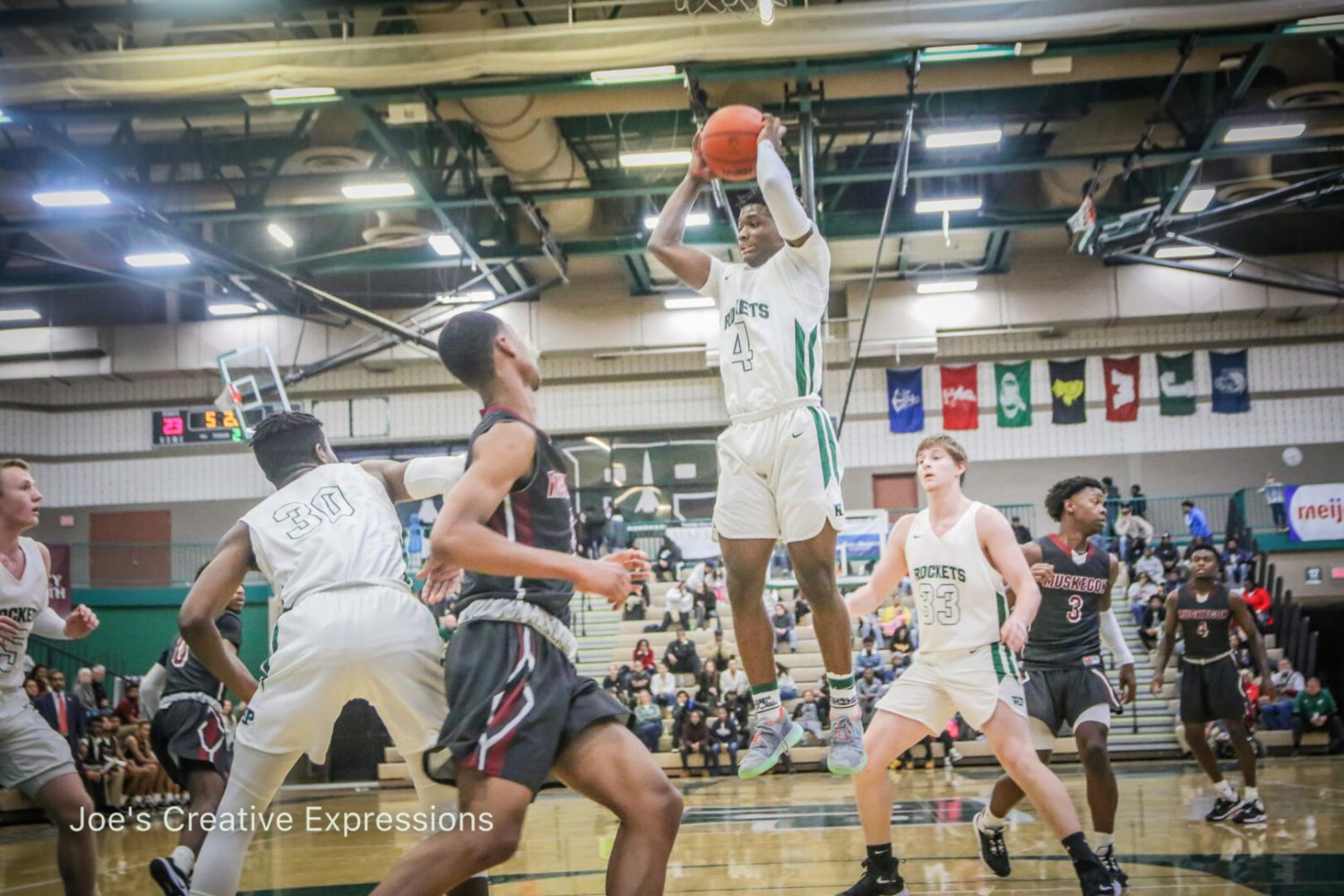 Daven Fox pulls down the rebound for Reeths-Puffer. Photo/Joe Lane 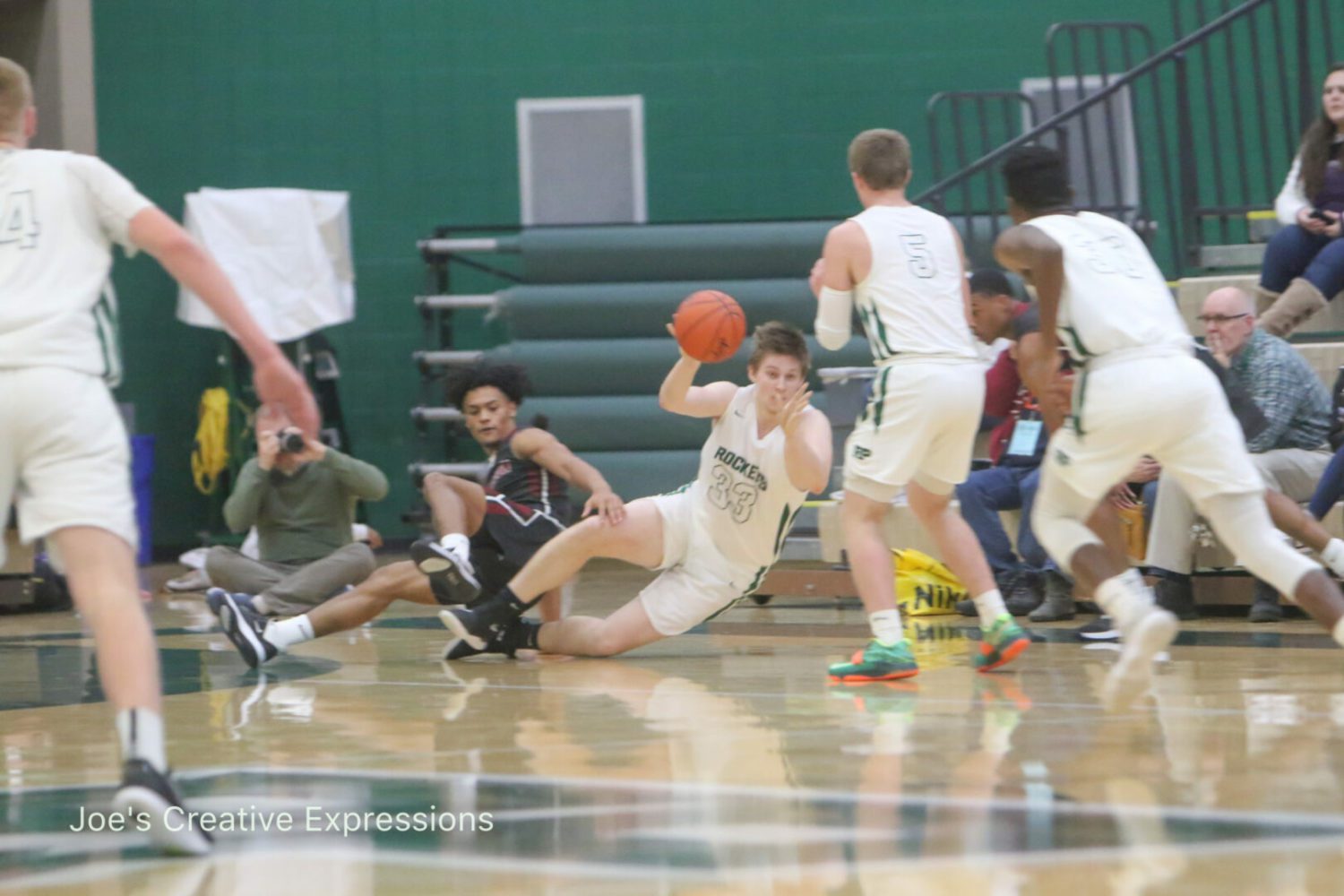 Josh Jordan passes the ball before he falls to the floor against Muskegon’s Cameron Martinez. Photo/Joe Lane 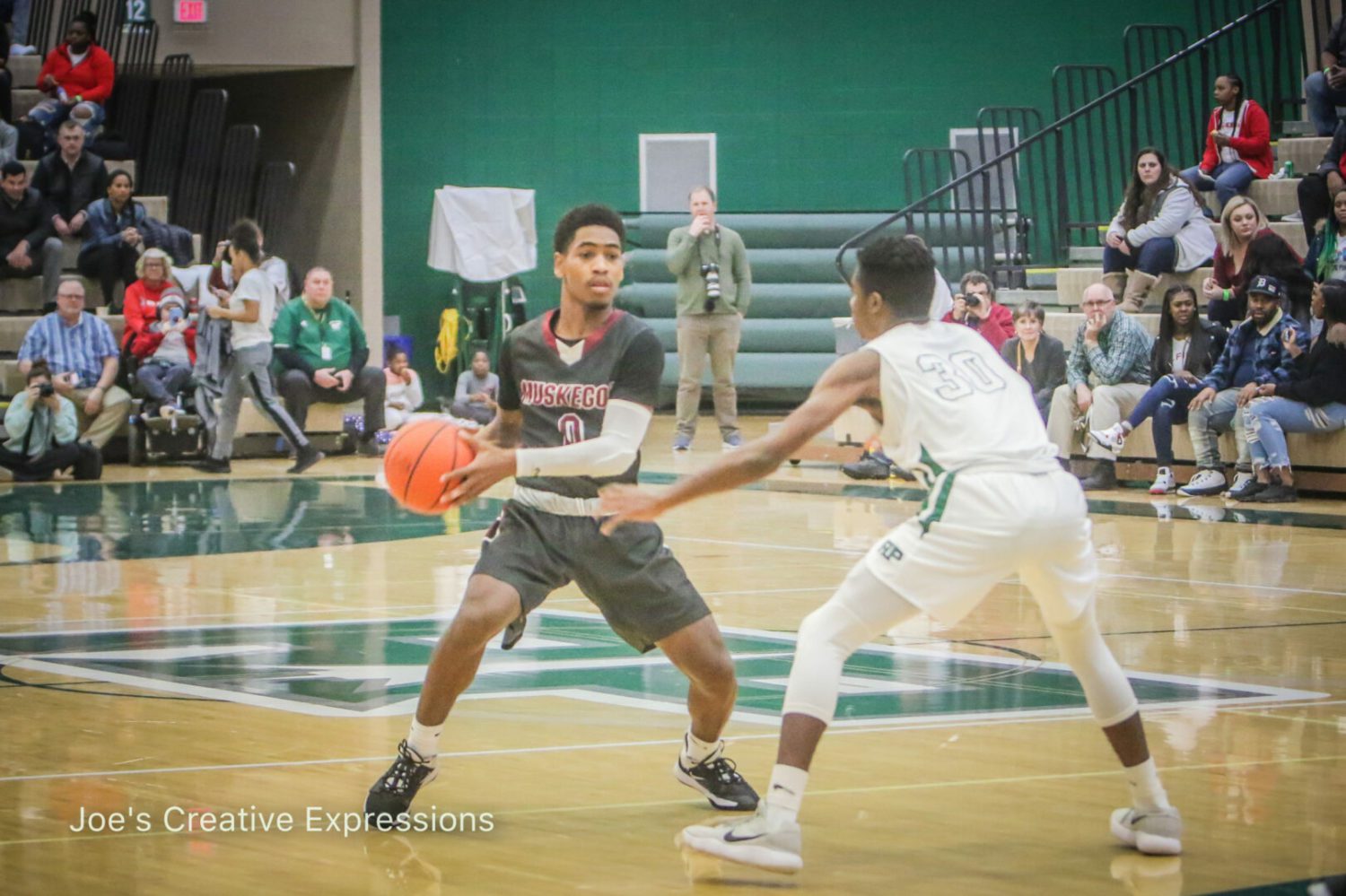 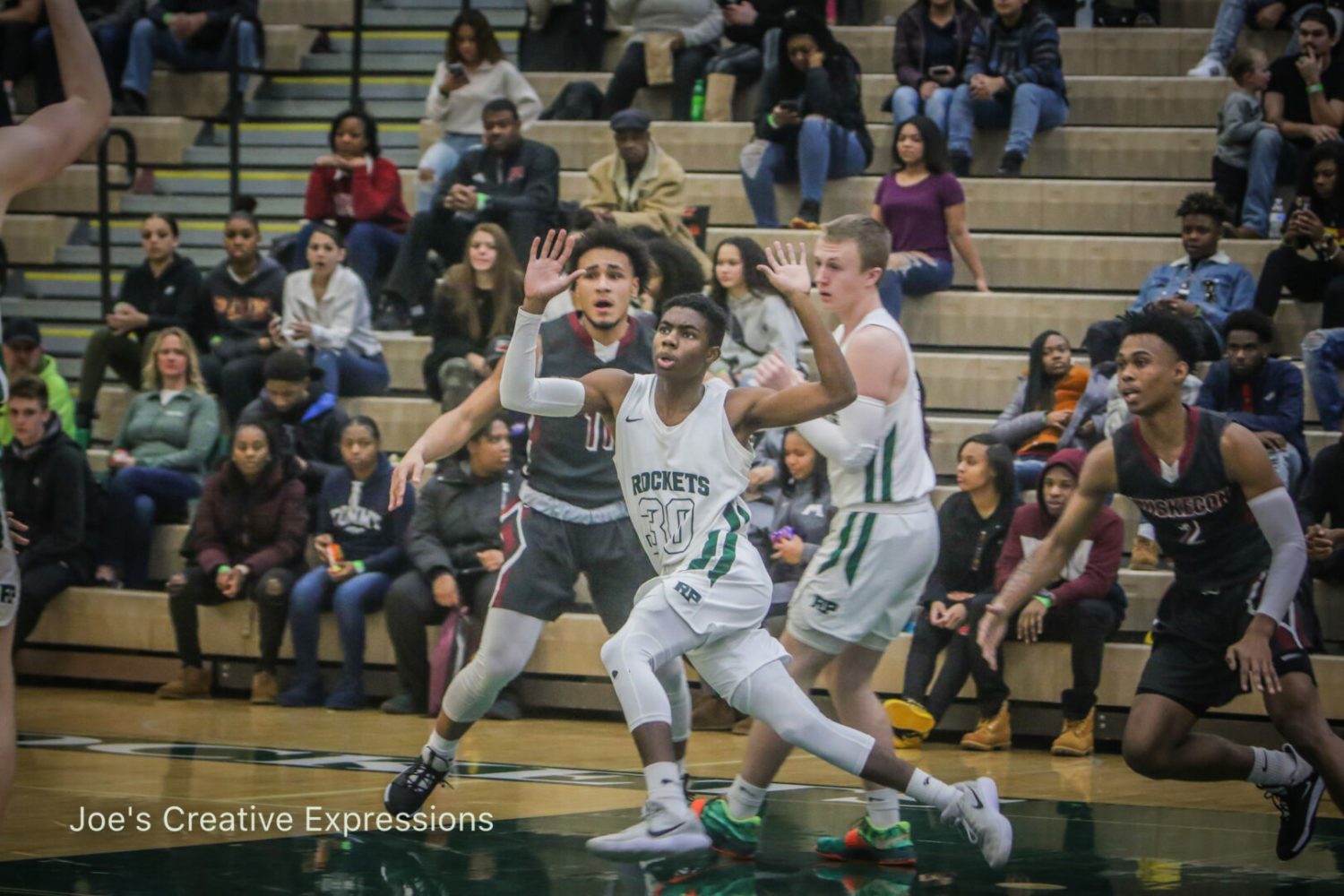 Reeths-Puffer’s No. 30 Emcee Williams looks for the pass as he flashes through the lane. Photo/Joe Lane