MUSKEGON – The Muskegon Lumberjacks wanted to enter into 2020 on a high note and they did just that, on New Year’s Eve.

The Lumberjacks continued their move upwards, closing the calendar year with a 4-2 victory over the Youngstown Phantoms on Tuesday at the L.C. Walker Arena in front of 2,266 fans. 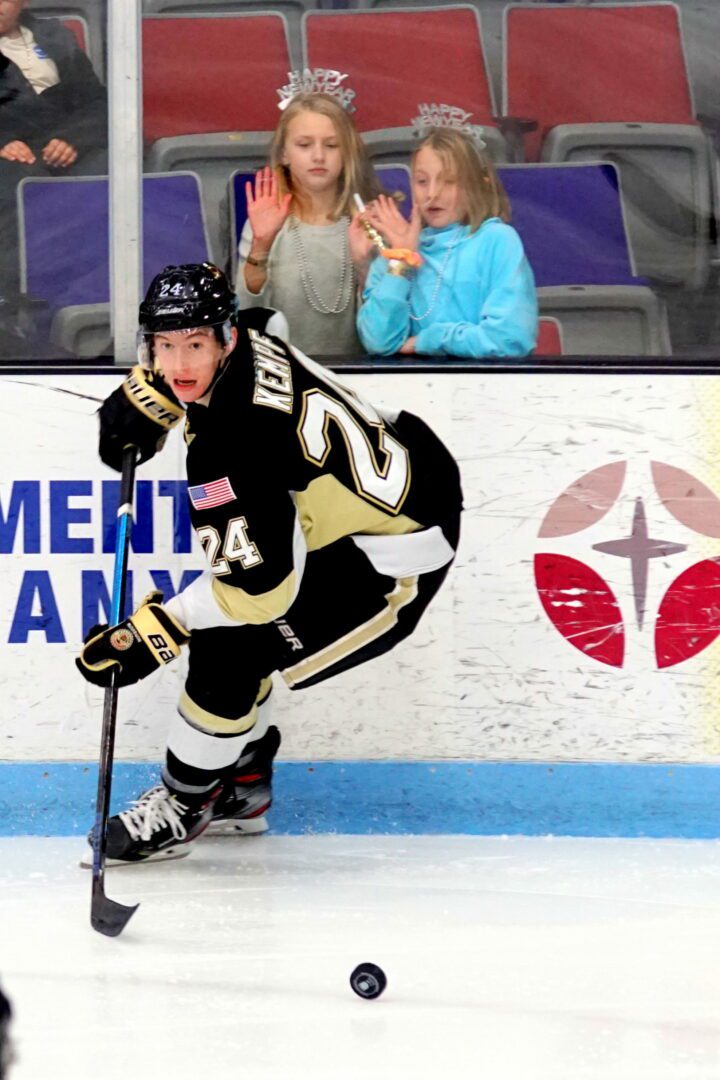 Muskegon is now 11-14-2 on the season, good for 24 points. The Lumberjacks have now bumped up to sixth-place in the USHL’s Eastern Conference standings, which is the final playoff spot.

There is a lot of season left and the Lumberjacks will look to solidify their spot in the playoff race this weekend when they travel to face the seventh-place Cedar Rapids Roughriders. Face off is slated for 8:05 p.m on Friday and Saturday.

“We came into this week hoping to get two of three wins and I am proud of the guys for digging in,” said Lumberjacks coach Mike Hamilton. “It was good to see the boys respond and get two in a row. This was a team that we lost three games against and it was nice to see us find a way to get pucks behind them.”

Muskegon’s goalkeeper Eric Green had a strong outing in his third start of the season, stopping 38 shots as Youngstown managed to outshoot the Lumberjacks by a 40-31 margin.

“He kept us in the game until we were able to get it going,” said Hamilton about his starting goalie. “That was good to see him allow the guys to get their legs underneath them and get going.”

Both teams failed to score during the first period of play.

Youngstown produced the first six shots of the contest but only managed to hold a slim 14-13 advantage in shots on goal heading into the first intermission.

The Phantoms also had a couple of key chances to score the first goal during the opening period, hitting the cross bar once and failing to get a shot off while looking at a wide-open net. 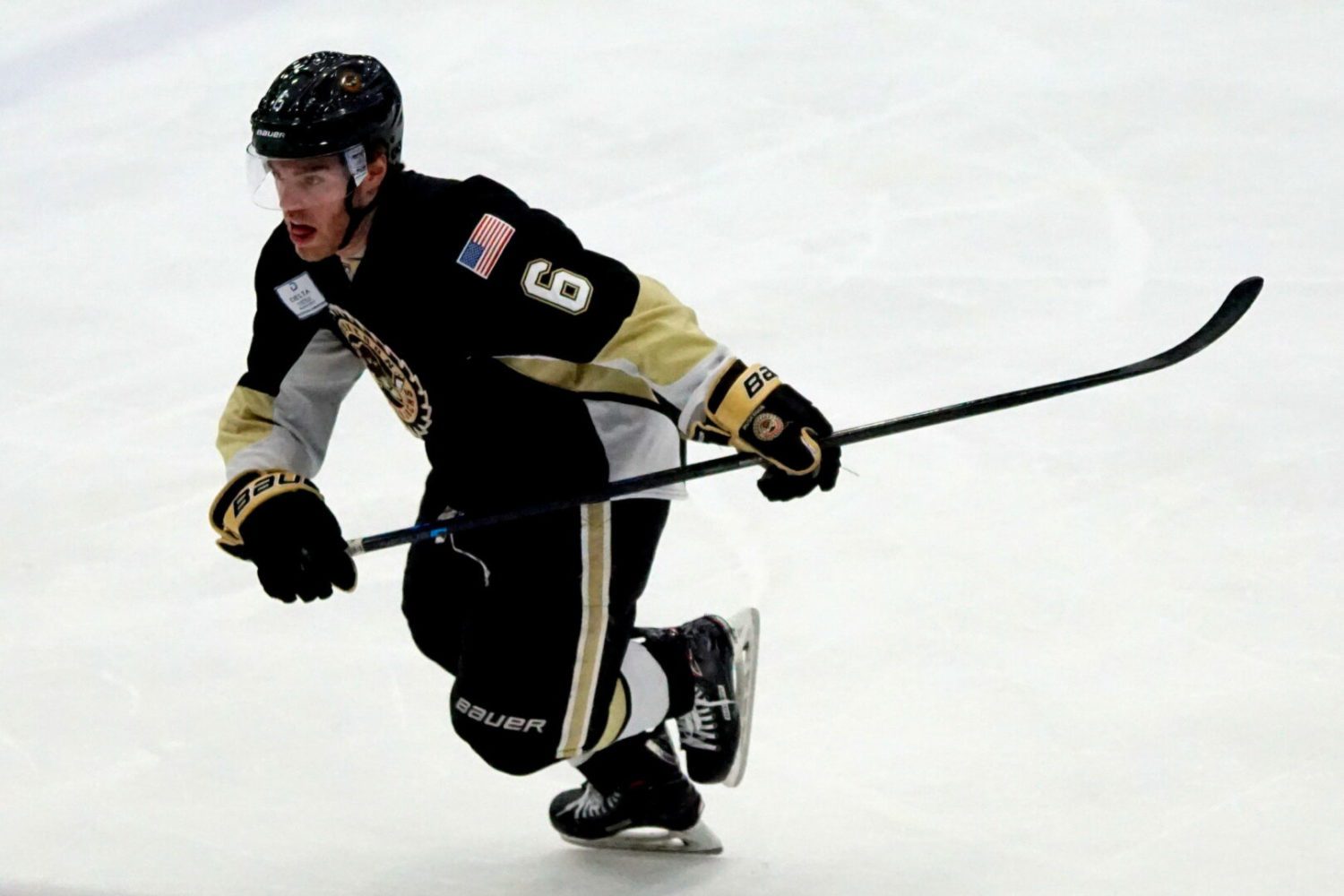 Youngstown broke the scoreless tie 1:58 into the second period on a goal from Jacob Felker to give the Phantoms a 1-0 lead.

Muskegon had a couple of great opportunities to tie the game while shorthanded, missing on a breakaway from Danil Gushchin and a 3-on-1 that ended with a missed opportunity by Dylan Wendt.

The Lumberjacks finally managed to tie the game 1-1 during their next shorthanded opportunity, with a goal 11:15 into the second period.

Gushchin led a fast break with Rhett Pitlick and scored his 12th goal on a give-and-go to tie the contest. Pitlick recorded the lone assist on the tally.

The Lumberjacks took a 2-1 advantage on a beautiful goal by Christophe Fillion at the 15:10 mark of the second period. 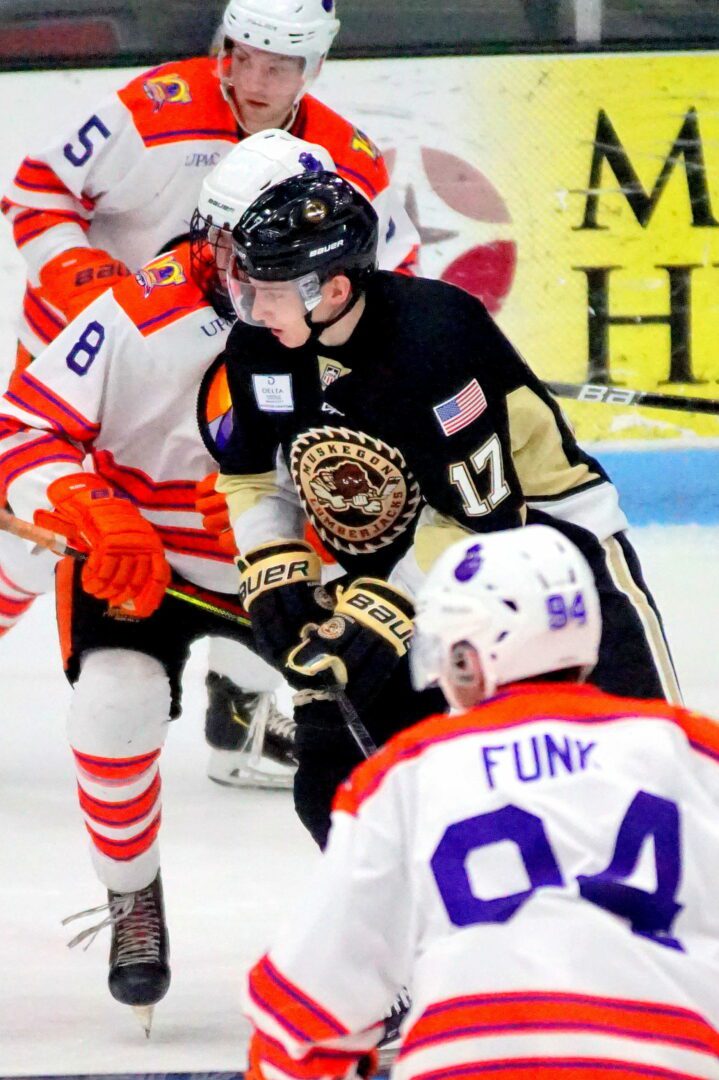 No. 17 Cameron Berg weaves through the Youngstown defense. Photo/Leo Valdez

Fillion’s goal was scored in front of the net on a beautiful pass from Cam Berg off a shot by Dylan Wendt.

“I was just going to the net and I saw Wendt shoot the puck and it went off of Berg’s stick and he passed it me and I found the empty net,” said Fillion. “It was good to get two goals and get the win.”

The Phantoms had a power play late in the second period but failed to score the equalizer and the Jacks entered the second intermission with a 2-1 lead despite being outshot in the period.

The Lumberjacks increased their led to 3-1 on a goal from Berg 2:05 into the third period, which was assisted by Gushchin and Pitlick.

Youngstown responded with a power play goal 5:24 into the third period by Trevor Kuntar to cut the Phantoms deficit to 3-2.

But the Lumberjacks quickly regained their two-lead 7:27 into the final stanza on Fillion’s second goal of the contest and eighth of the season. Wendt and Tyler Dunbar assisted on the goal.

The Lumberjacks failed to score on their three power play opportunities, but scored a shorthanded goal and killed five of the Youngstown’s six power plays. 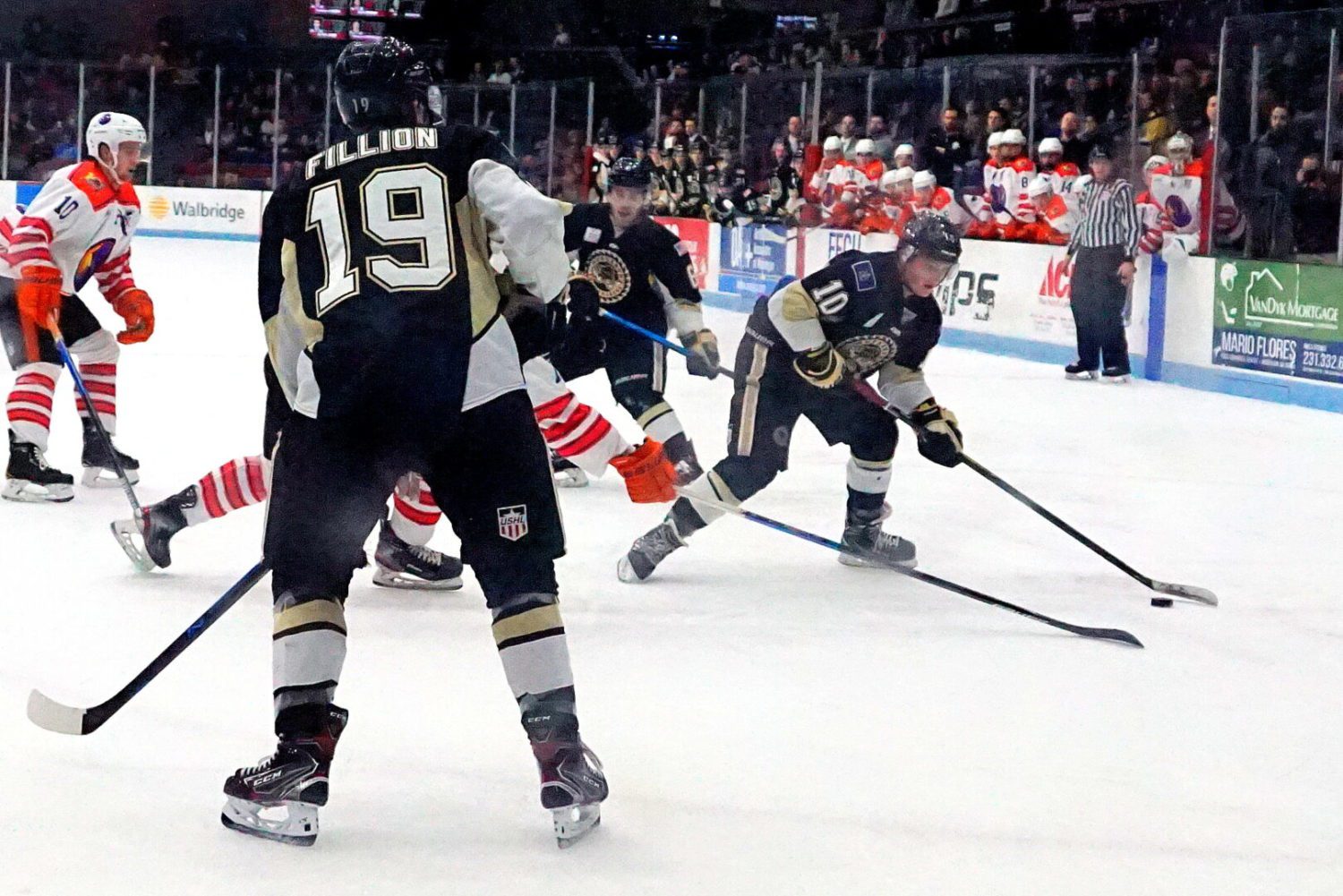 No. 10 Alex Gaffney moves the puck in the Youngstown zone. Photo/Leo Valdez