MUSKEGON – During a time out late in the fourth quarter on Tuesday, Muskegon Heights Coach Del Stewart clenched his fists and roared to

his players, “If you want it, sometimes you gotta go take it!” 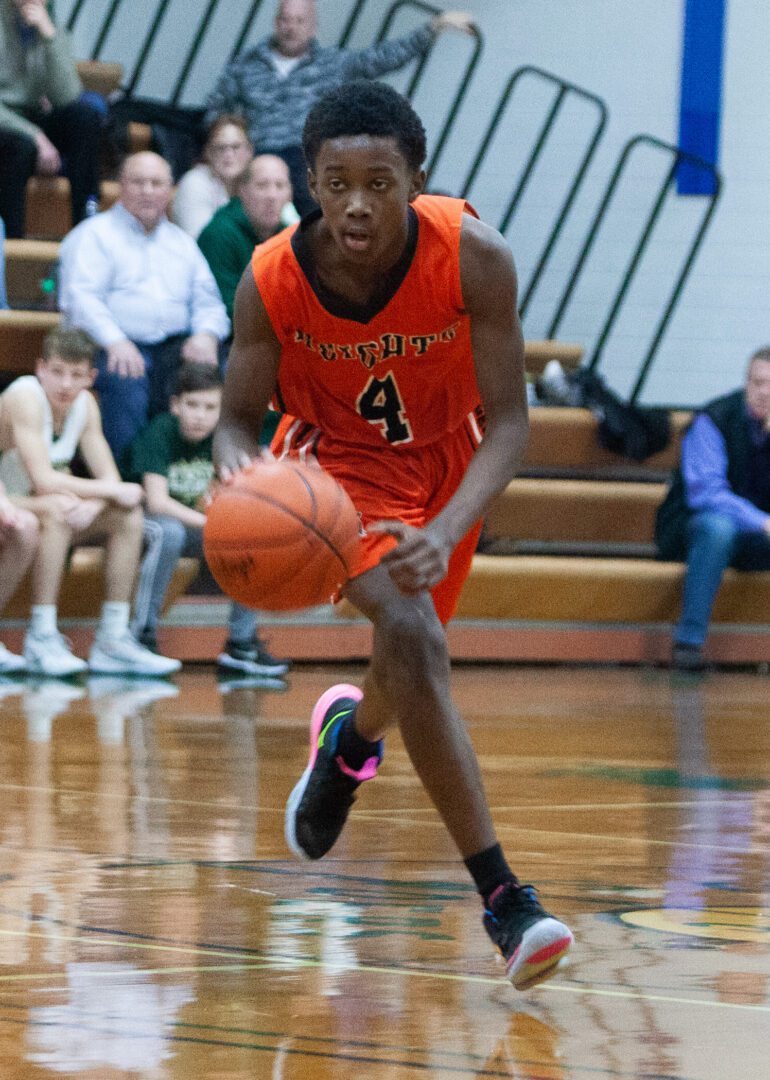 Ja’Kari Edwards gets ready to make a pass for Muskegon Heights. Photo/Jason Goorman

The Tigers needed an overtime session to do so, but they grabbed their opportunity and took an impressive 51-48 come-from-behind victory over Muskegon Catholic on the road in a Lakes 8 Conference matchup.

It was a stunning win aided by a stifling full-court press, and may provide a much-needed confidence boost to a young Muskegon Heights squad that features two freshmen in its rotation.

The Tigers entered the contest with a 1-6 record, and midway through the third quarter it looked like they were on their way to their seventh setback. Muskegon Heights trailed 31-16 with 4:30 remaining, but a decision by Stewart to apply a full-court press dramatically changed the contest.

“I just felt like defensively up to that point, we were playing iffy,” Stewart said. “We weren’t playing disciplined defensively and were reaching too much. I figured with us playing from behind, (the press) might force some turnovers to get us some extra possessions. Maybe we can swing the momentum in our favor.

“Once we started to get it going, you saw them take a step backward a little bit. A few things triggered in our favor and it got us right back in the game.”

Sparked by the blazing speed of senior guard Jaiden Williams, who turned turnovers into transition buckets, the Tigers had a 9-0 run to make it a 31-25 contest. 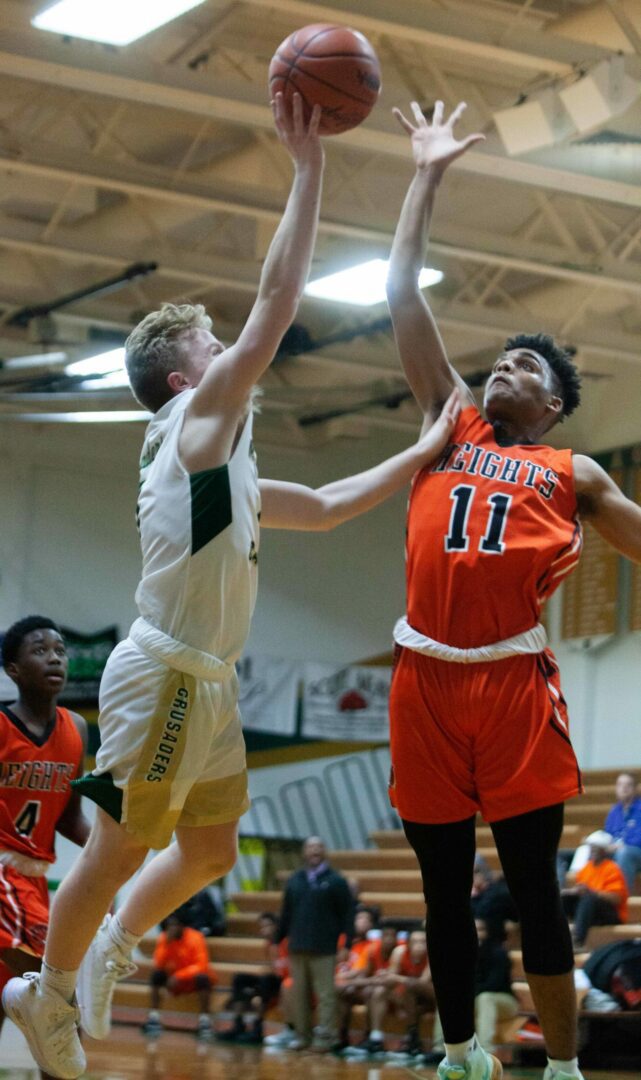 But MCC closed the third quarter with a tough layup in traffic by senior guard Tiovanni Knight and a press-breaking layup by sophomore Jaden Johnson, to take a 35-25 lead into the fourth.

Then the Crusaders’ lead began to dwindle away.

“(The press) energized us a lot,” said Williams, who led the Tigers with 20 points. “It motivated us even more to score some more points and fight back.”

A pair of free throws by MCC senior Jared Dugener put his team up 40-31 with 5:41 left in regulation. But the Tigers got back-to-back steals and fast-break buckets by Williams and freshman Jon’athan Moore, respectively, and a huge corner three-pointer by sophomore Ja’Kari Edwards, to make it a 42-40 game with 2:25 left.

Moore, who battled through painful leg cramps throughout the fourth quarter and overtime, tied the game at 42-42 with a short jumper with 1:15 on the clock.

The Crusaders had possession with 25.9 seconds left and called time out. They worked the clock down for a final shot, but the Tigers’ tremendous man-to-man defense forced an off-balance three-point heave by MCC’s Seth Arends that was nowhere close, sending the game to overtime.

Muskegon Heights started strong in the OT, jumping out to a 46-42 lead following an offensive rebound and putback by Deangelo Hollins with 2:15 remaining.

The Crusaders had several opportunities to claw back, but missed 3 of 4 free throws.

Muskegon Heights maintained a slim lead over the next 20 seconds. The Tigers had a chance to ice the victory with 13.1 seconds left, but missed the front-end of a 1-and-1 free throw, keeping the score at 50-48. 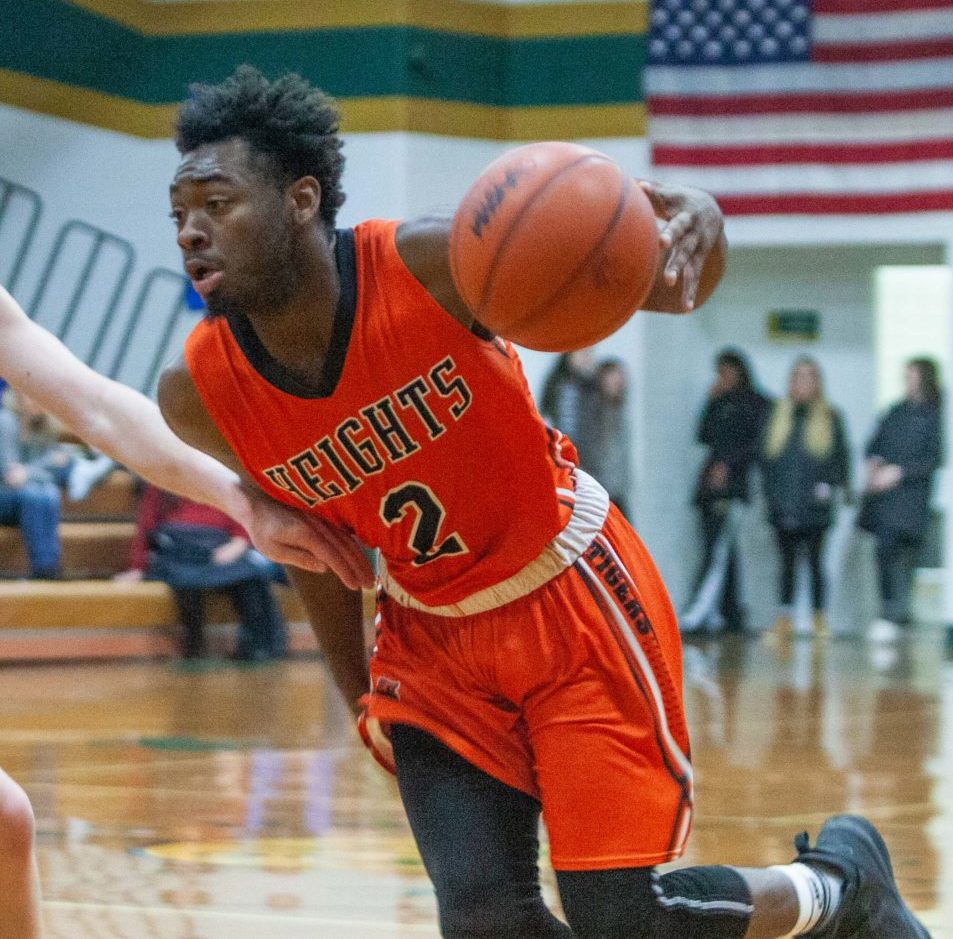 MCC’s Sam Novotny had an open path for a layup, but Heights forward Ernest Helms sprung up high to block the shot out of bounds with 4.7 seconds remaining.

MCC coach Lamar Jordan set up a play for leading scorer Dugener during a time out, but Dugener was forced into a tough attempt underneath the hoop. The Tigers’ Moore got the rebound and was fouled.

Moore managed to make one of two shots at the foul line, making it a 51-48 game and giving MCC a slim chance to tie the contest with a triple. But the Crusaders struggled to get a shot off and their attempt went up after the buzzer sounded.

“It’s a disappointing loss,” said Jordan, whose squad fell to 3-6 overall and 2-3 in the conference. “Facing the press was something we worked on at practice yesterday, and we knew once they got down they were going to pressure us full court.

“Our motto is to keep it under 15 turnovers and we didn’t do that tonight. I knew we were way over that.”

Dugener, who Jordan said was feeling under the weather, was held to 11 points, which was matched by sophomore center Johnson.

Stewart said he hopes the gritty win elevates his squad during the second half of the season.

“Wow, it’s certainly a confidence booster,” he said. “A win like this takes them sky high, but we’ve had losses that takes them below the ground. We’ve been trying to focus on not just the wins and losses, but doing the stuff that produces winning basketball. Through all the ups and downs, they’ve kept working.” 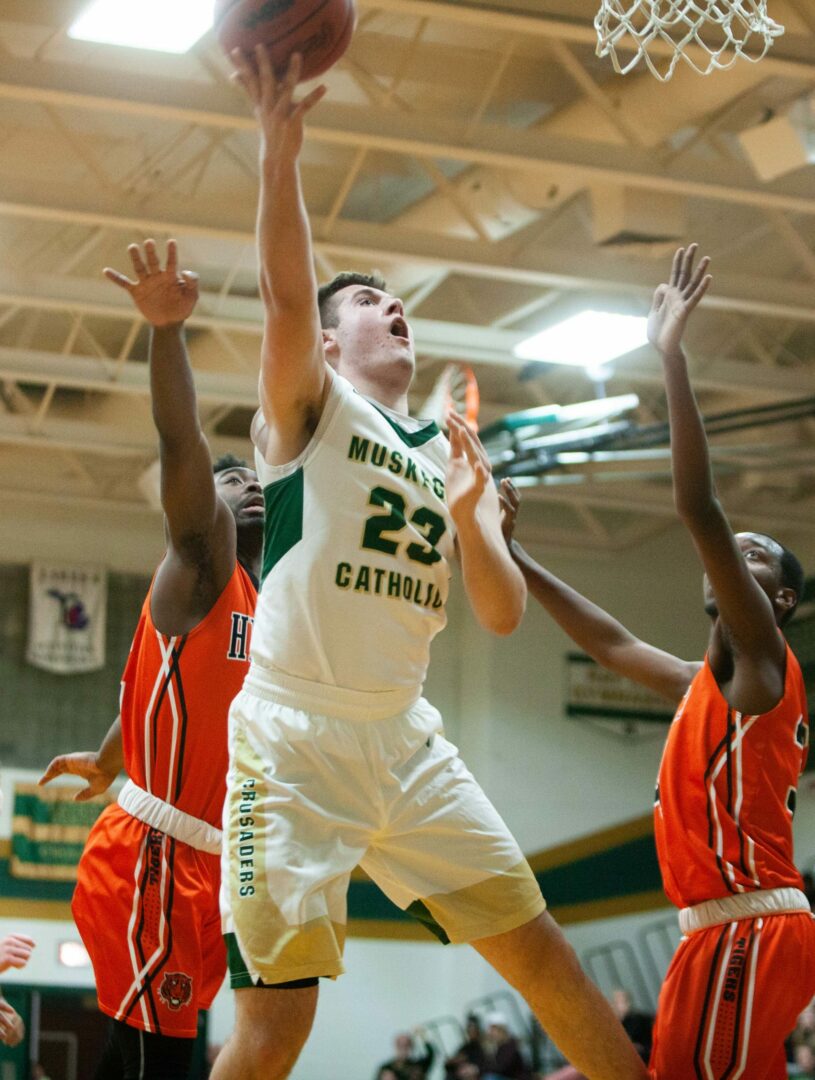 Muskegon Catholic forward Jaden Johnson goes up for a shot under the hoop. Photo/Jason Goorman 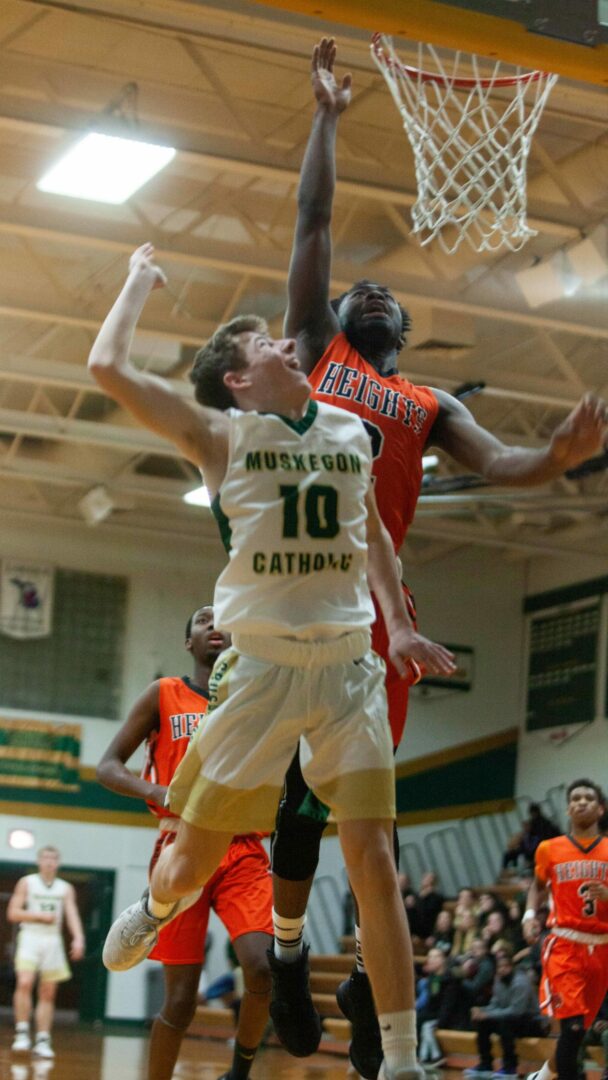 No. 10 Seth Arends find a bucket for MCC. Photo/Jason Goorman 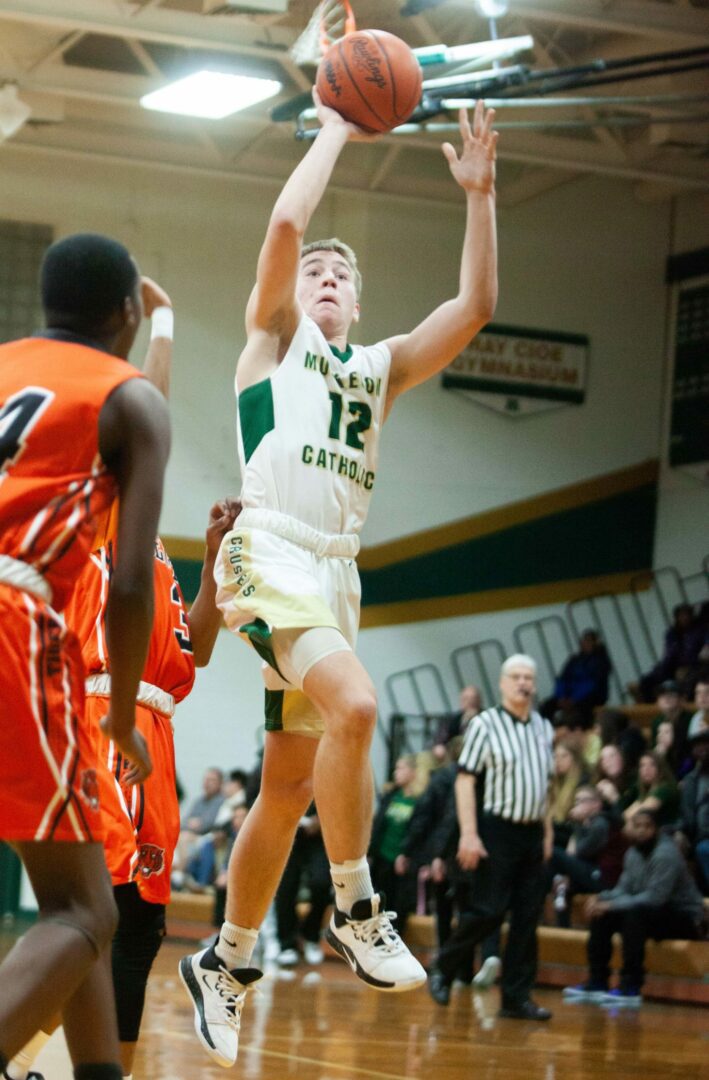 Dane Rutz takes a shot in the lane for MCC. Photo/Jason Goorman 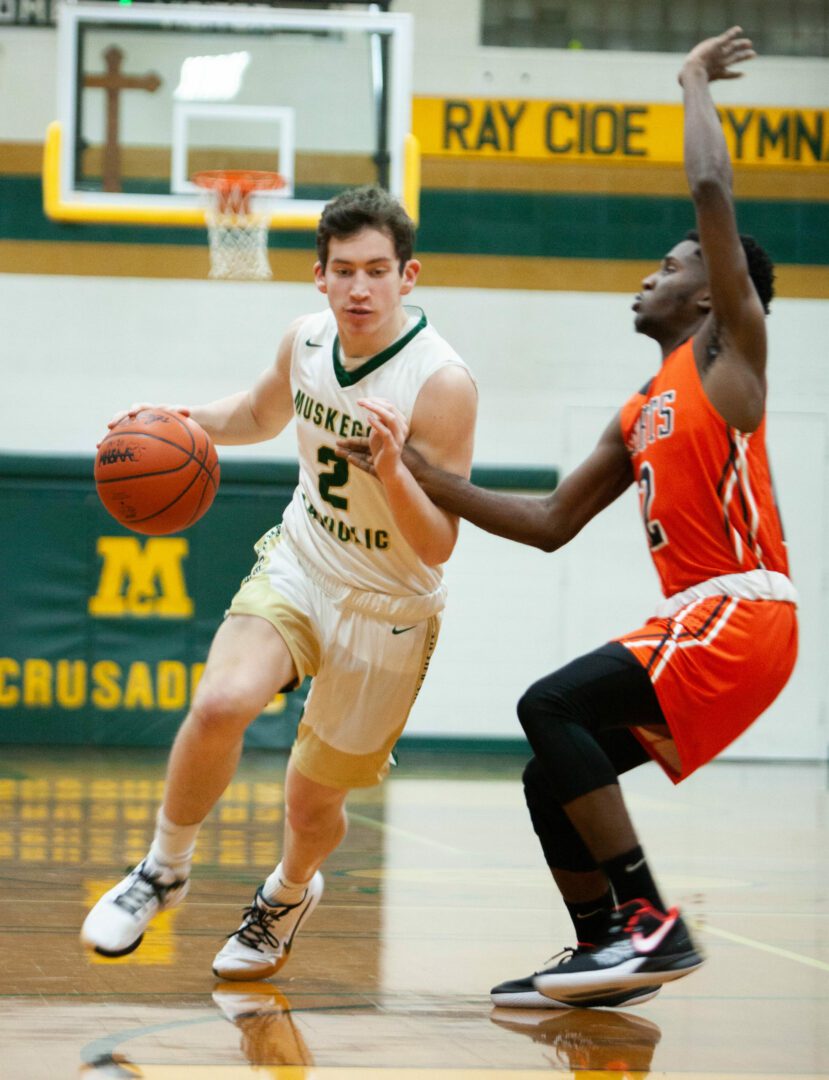 Jared Dugener pushes the ball up the floor for MCC against Deangelo Hollins. Photo/Jason Goorman 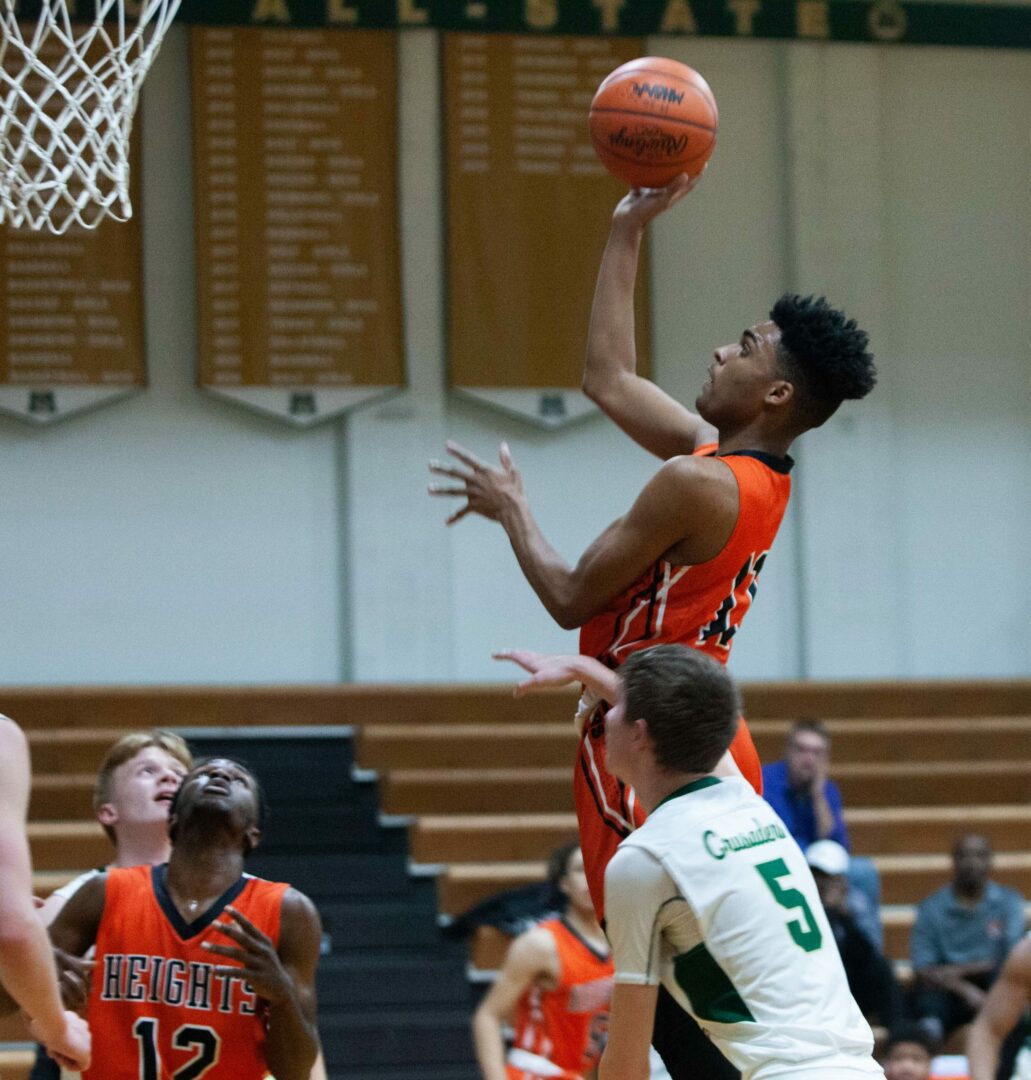 Montague girls get by Fremont 48-38