Orchard View boys rally past Ludington 52-49, move into a tie for conference lead 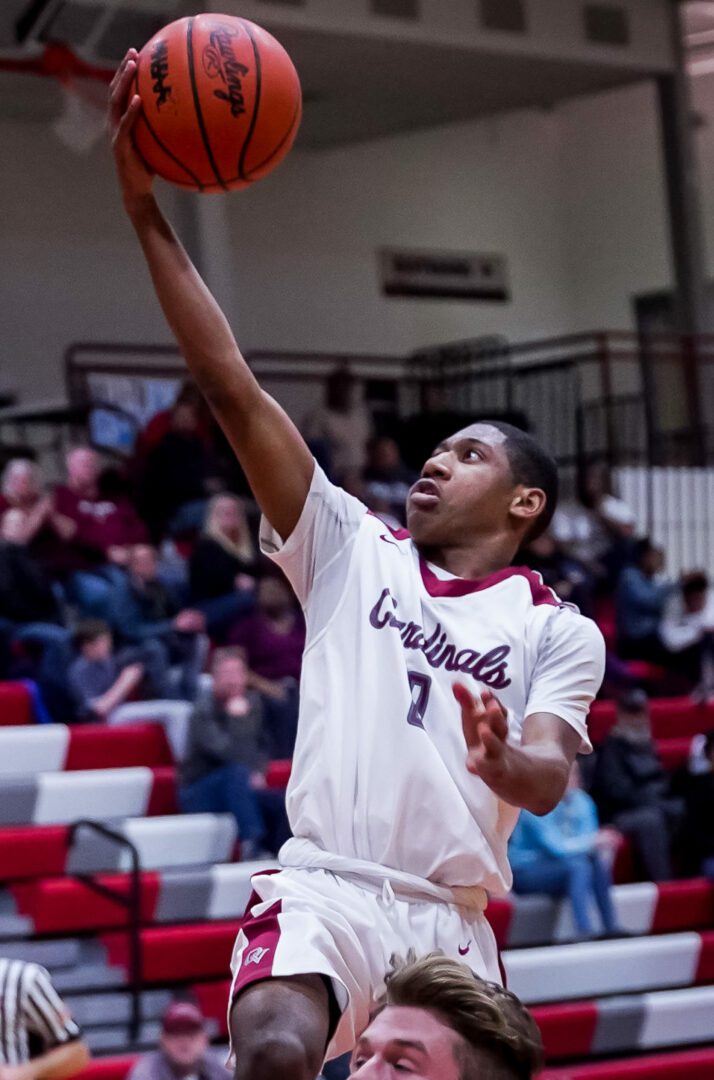 Ke’Ontae Barnes goes in for a layup for Orchard View. Photo/Kris Rake

The Cardinals would very much like to end that streak this year, and they showed how much on Friday night. They rallied from a 12-point first-half deficit to pull off an impressive 52-49 victory over Ludington, which came into the game leading the Lakes 8 Conference.

Orchard View and Ludington are now tied on top of the conference standings at 4-1. OV improved to 6-2 overall while Ludington fell to 7-4.

“That’s one of our goals, definitely,” said Orchard View Coach Nick Bronsema about winning a conference title. “I’ll never forget what Coach (Rick) Zoulek at Shelby told me, his number one thing every year is to win the conference.

“The way he explained it to me, it shows how well you’ve done not just at the beginning, middle or end of the season, it’s a full season type deal. I’ll never forget that.”

Orchard View was once again led by junior Ke’Ontae Barnes, although it was in a different fashion on Friday night. The dynamic scorer didn’t start after missing a practice due to illness earlier in the week, but still netted a game-high 29 points.

“Ke’Ontae was sick, so we decided to bring him off the bench,” Bronsema said. “He took it well. He had a really great head about it. He’s not used to that obviously. He felt a lot better today.

“It’s kind of a bummer, but you sit him and give the others a chance to start because they work their tails off, too.”

Barnes said the win is a big one in terms of the conference race. 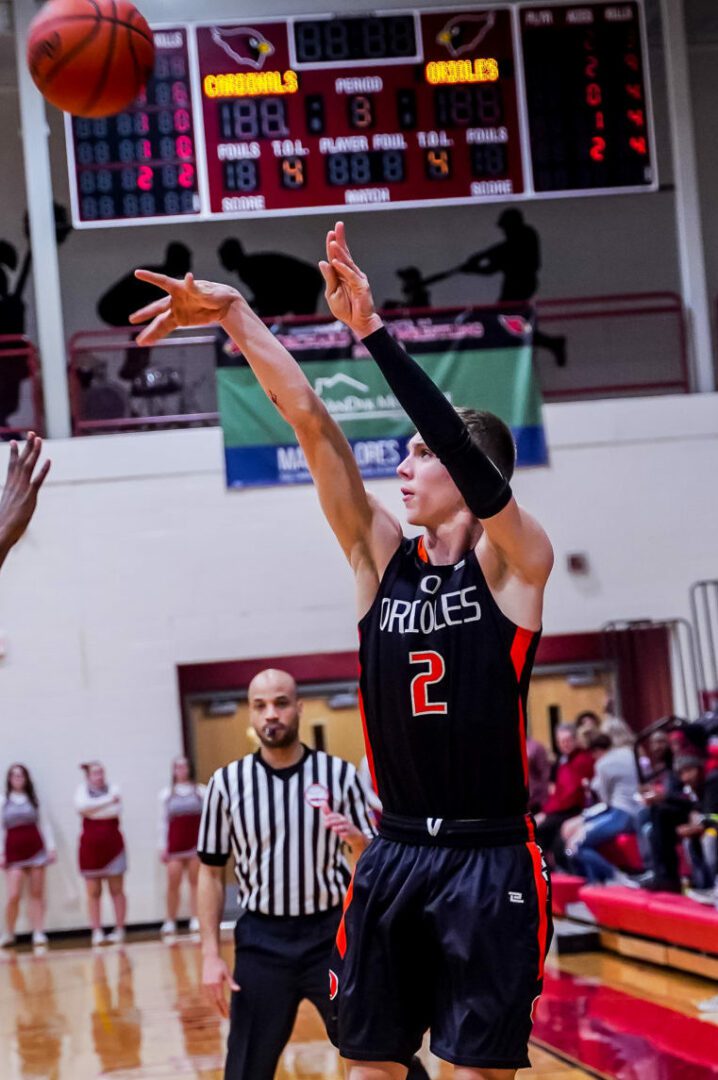 “This means a lot,” he said. “We’ve got a chance to win our conference for the first time in a long time. I think if we keep playing like we’re playing, we’re going to win.”

Ludington got off to a fast start with Barnes on the bench, racing to a 13-2 lead behind a pair of threes from Brayden Porter. The Cardinals scored the last four points of the opening quarter to draw within 13-6 after one.

Ludington had its biggest lead, 23-11, after a three from Evan McKinley in the second quarter. Orchard View rallied and closed the half on a 10-2 run to draw within 25-21.

The Cardinals took their first lead of the game, 26-25, on a Barnes triple with 6:10 remaining in the third quarter. The teams traded buckets for the rest of the quarter and were tied 34-34 heading into the fourth.

Orchard View scored the first seven points of the final quarter, sparked by a three from JJ Tunstull, who scored all eight of his points down the stretch.

“For JJ, this is the best game he’s ever played,” Barnes said. “I’m so proud of him. He hit two threes when it was a really close game. We really needed that.”

Ludington hit two free throws as the clock ran down, OV sank one, and the Cardinals escaped with the victory.

Riley Calhoun led Ludington with 13 points, including 10 after halftime. Porter and Jake Plamondon both added nine for the Orioles. 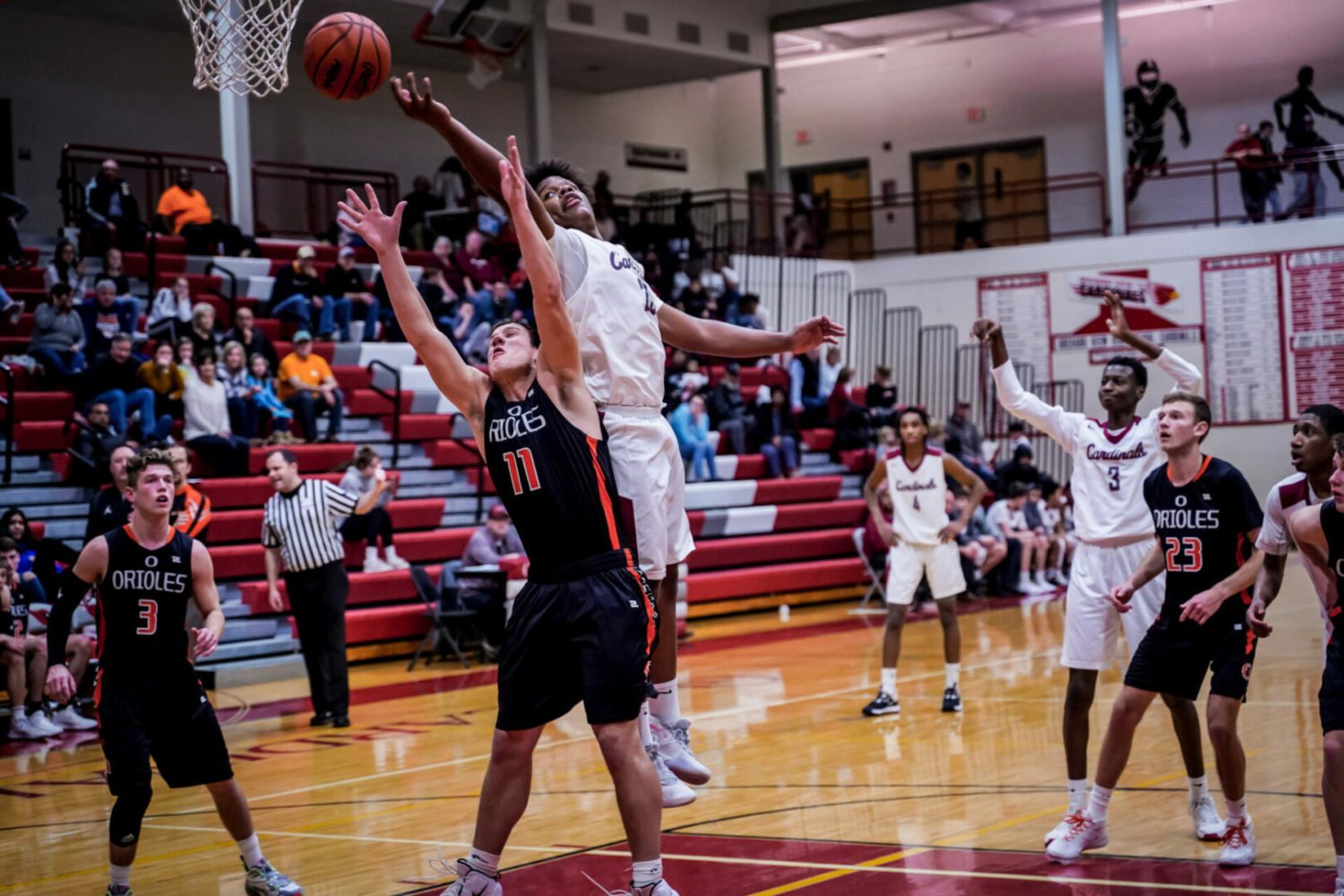 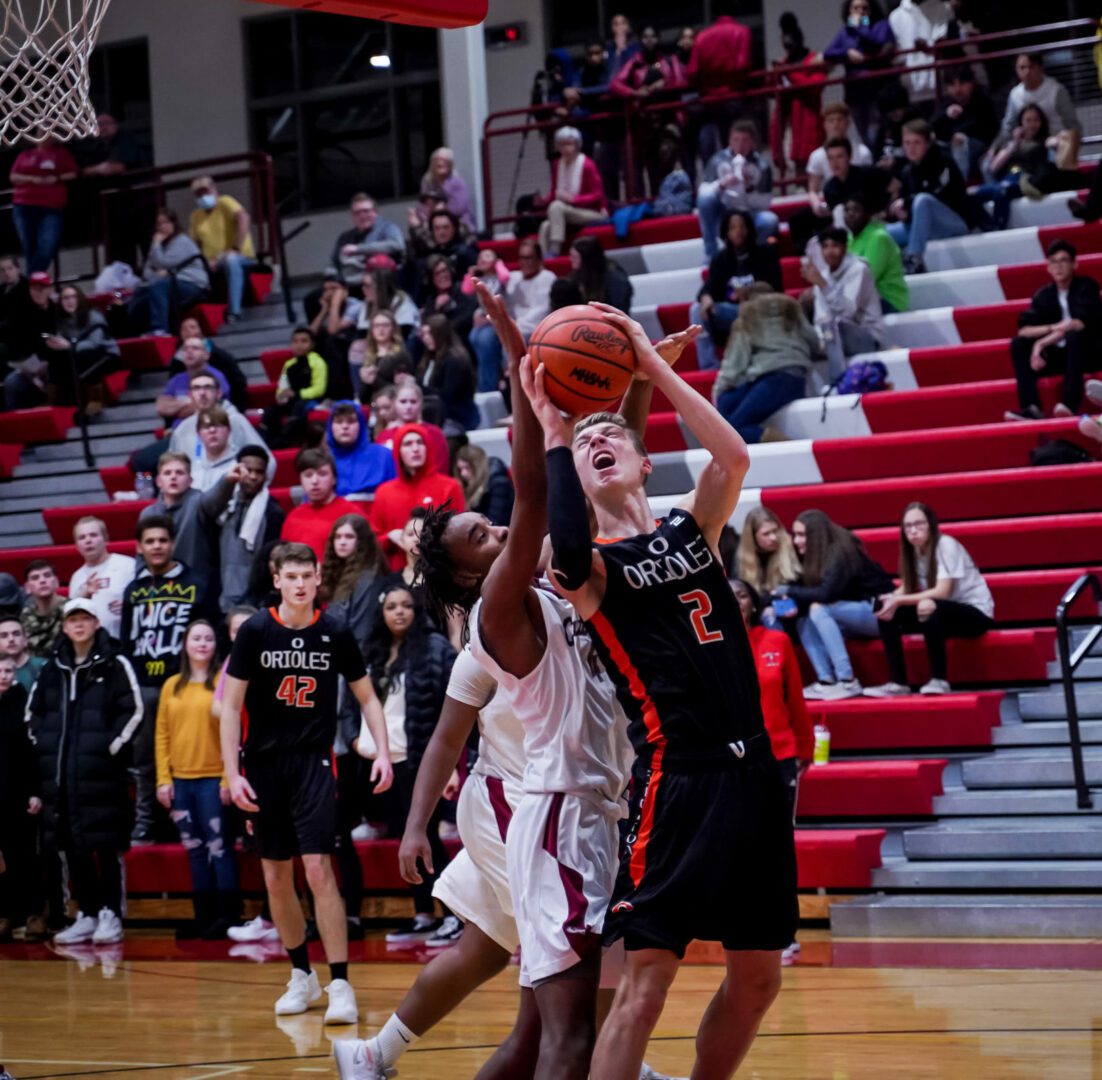 Ludington’s No. 2 Riley Calhoun goes up for a shot underneath the basket. Photo/Kris Rake 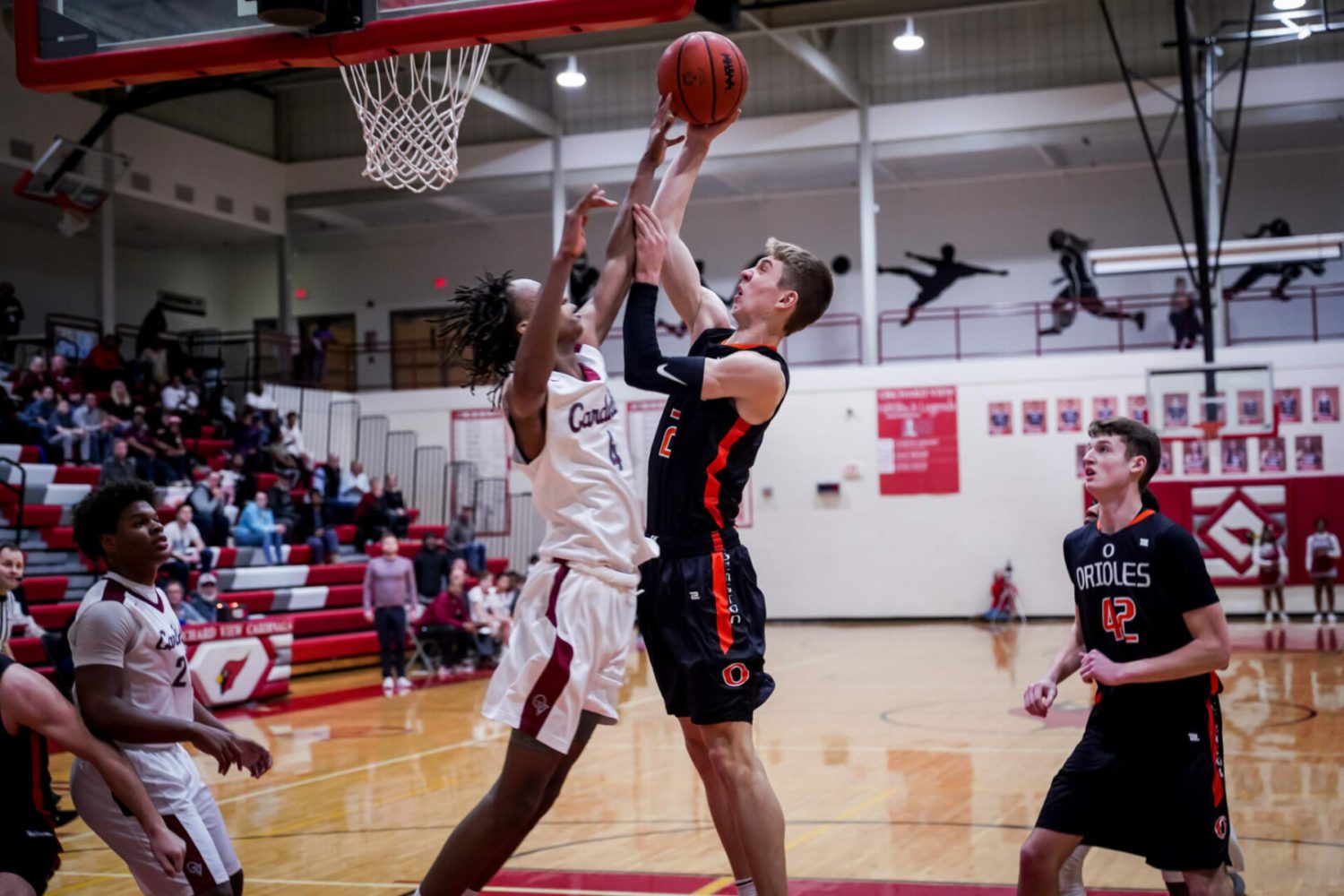 Riley Calhoun goes up for a shot over Orchard View’s No. 4 JJ Tuntsull. Photo/Kris Rake 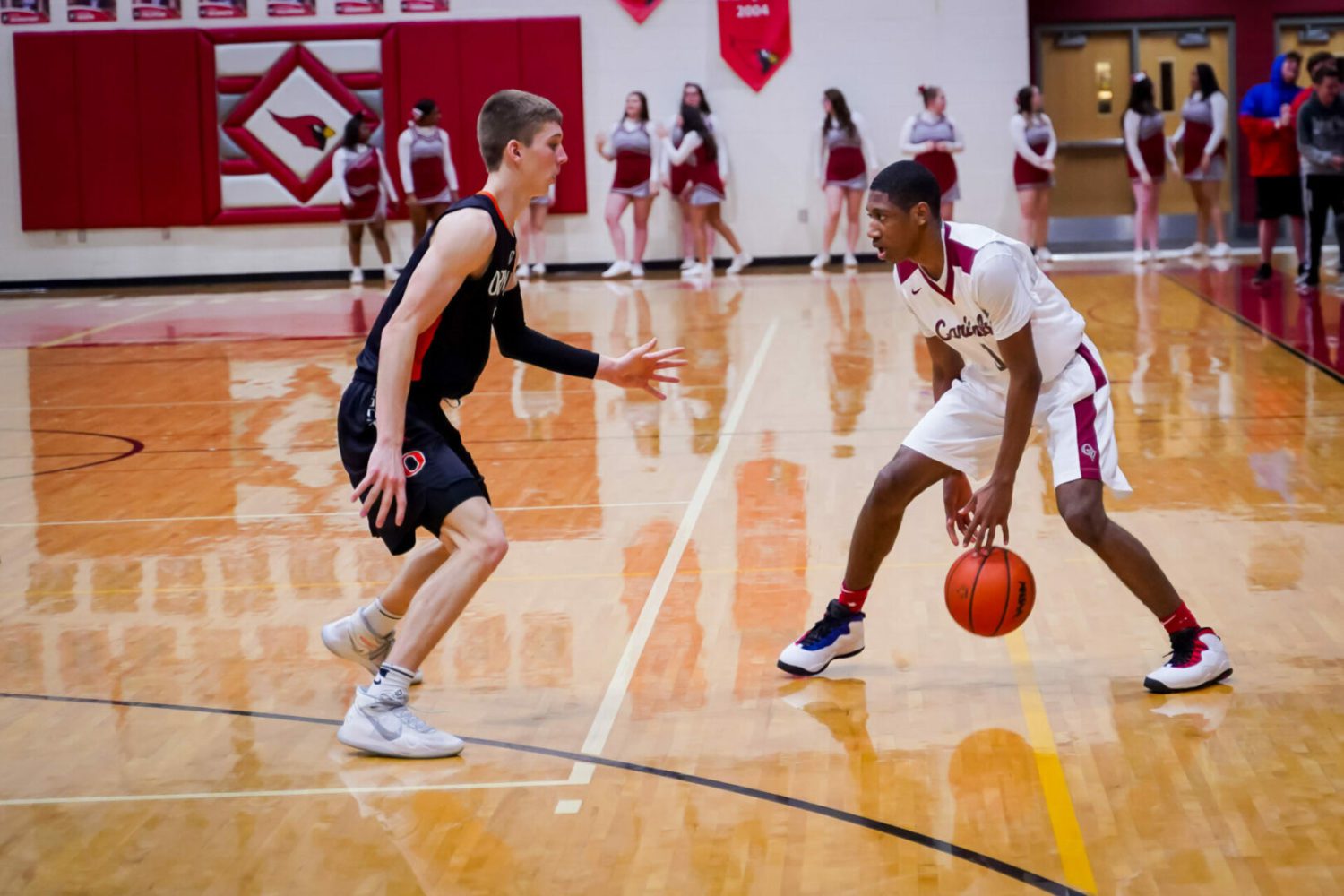 Ke’Ontae Barnes controls the ball on the outside for Orchard View. Photo/Kris Rake

Fruitport, Ludington and Reeths-Puffer each go 2-1 in volleyball quad meet