RAVENNA – They’re doing it at a school with a tradition of excellence in football, but fewer success stories on the basketball court.

They’re doing it without their leading scorer from last season, who was lost to an injury way before this season ever started. 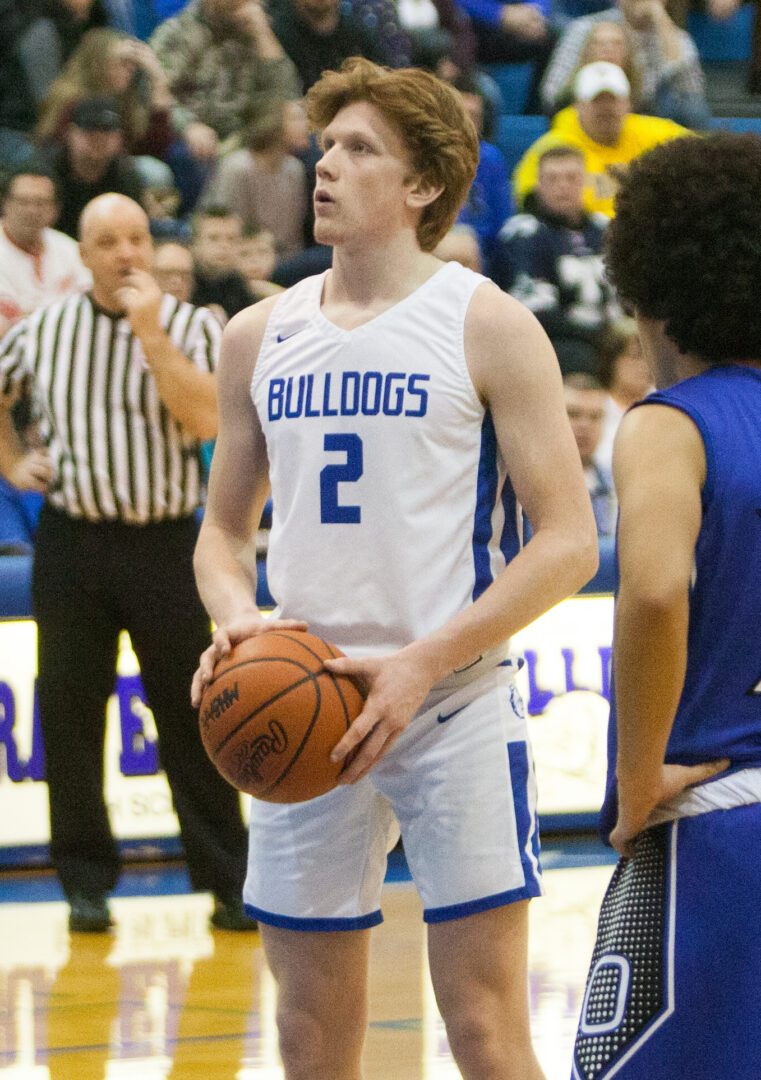 They’re doing it with a first-year varsity coach who is at a loss for words when asked to name his best player, or the guy who should have the ball when the game is on the line.

The coach has trouble answering those questions because there are no superstars on the Ravenna boys basketball team. The only statistic the coaches and players care about is their win-loss record, and so far that has been pretty impressive.

At 8-0, Ravenna is one of the biggest surprises of the area high school basketball season. The Bulldogs’ most exciting win thus far was their last one, a thrilling 62-56 victory  at home over archrival Oakridge on Thursday, which left Ravenna alone at the top of the West Michigan Conference standings with a 5-0 league mark.

Few would have guessed the team would have so much success this season.

Yet here the Bulldogs are, undefeated after eight games. According to senior center Jacob May, that shouldn’t be a surprise.

“We honestly expected it,” the 6-foot-5 center said. “I feel our team chemistry is really solid. And beginning last year, we started to take things more seriously. Now, we treat every practice like it’s a game. We go all out.” 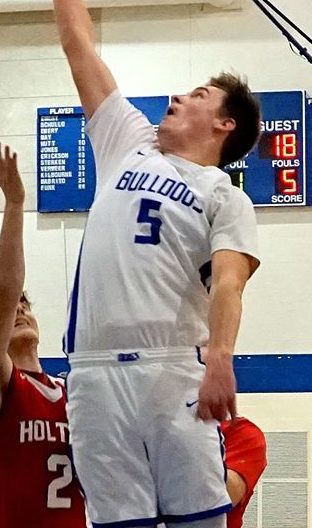 Ravenna’s Jacob May goes up for two points against Holton. Photo/Leo Valdez

Fortunately Ravenna was able to replace Johnson with new head coach Courtney Kemp. He was the junior varsity coach under Johnson, and has kept a lot of his same principles and Xs and Os in place, making it a smooth transition.

“My resume is not that fat,” Kemp said with a laugh. “I’ve been coaching JV ball the last five years, and I kind of followed Coach Johnson over here. We went to the same high school (Unionville-Sebewaing) and he graduated in the same class with my brother.”

The biggest change, Kemp said, is that the Bulldogs play more zone defense than they ever did under Johnson, to utilize their abundant team height.

Kemp said he has noticed a gradual shift in interest toward basketball at Ravenna, which was sparked with last season’s strong campaign. That carried over to off-season workouts, he said.

“Coach Johnson did a nice job of building the excitement for basketball,” Kemp said. “In the past, we’d have one of two kids show up for workouts in the summer, or another show up for the last 10 minutes because he overslept.

“Now, we’ve got six to eight kids at every session. Definitely more people are taking interest. And it’s definitely taken off (this year). We hope to keep it going. There have definitely been some nice crowds watching us.”

May, who leads the team in scoring this season with an average of nearly 15 points a game, said there are not necessarily more basketball-first athletes at Ravenna, but more multi-sport kids who are buying into making themselves better on the court. 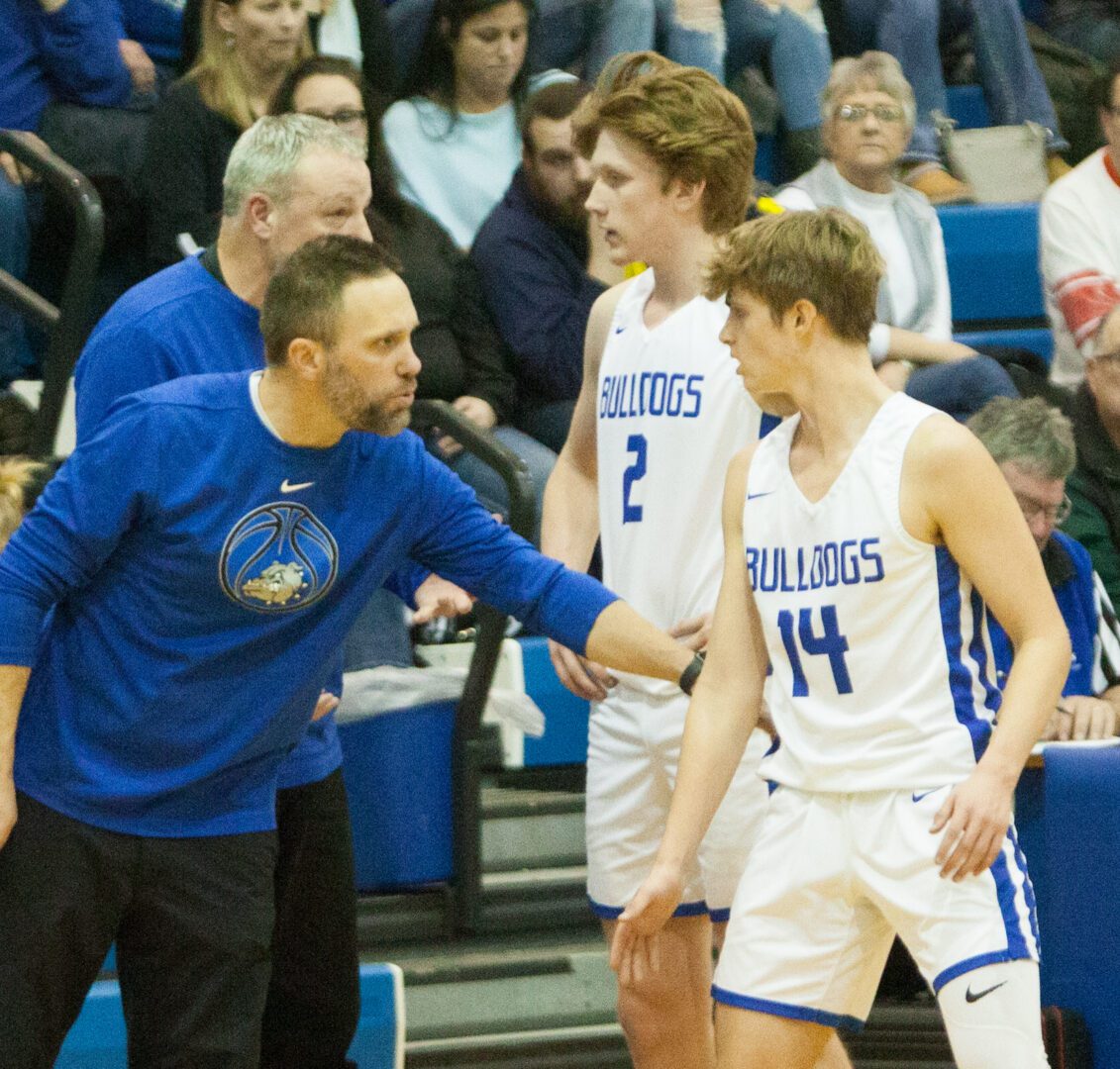 May’s father, Andy May, had a hand in that effort when the current group of seniors was in middle school. He coached them in tournaments through the American Youth Basketball Tour, and in youth leagues in Grand Haven.

“He’s actually one of our (varsity) assistant coaches,” May said about his dad. “He’s always telling me to crash the boards and hustle back on defense. And he’s big with fundamentals, which I can always improve on.”

May, in his third season on varsity, used to be that big guy who liked to pop out and routinely drain long-range shots. But Kemp said he asked him to sacrifice that to battle more in the paint, draw double teams and pass to teammates who have open looks.

May has been fine with all of that, saying his favorite go-to moves are the up-and-under and a jump hook. He’s also happy to spread the wealth on offense among his teammates.

“Jacob has really sacrificed a lot of shot attempts, just so it can open up the offense for others,” Kemp said. “We really feel like our strength is in our numbers. We feel like one through 11, if we put them in the right positions, any one of them can score in big spots. 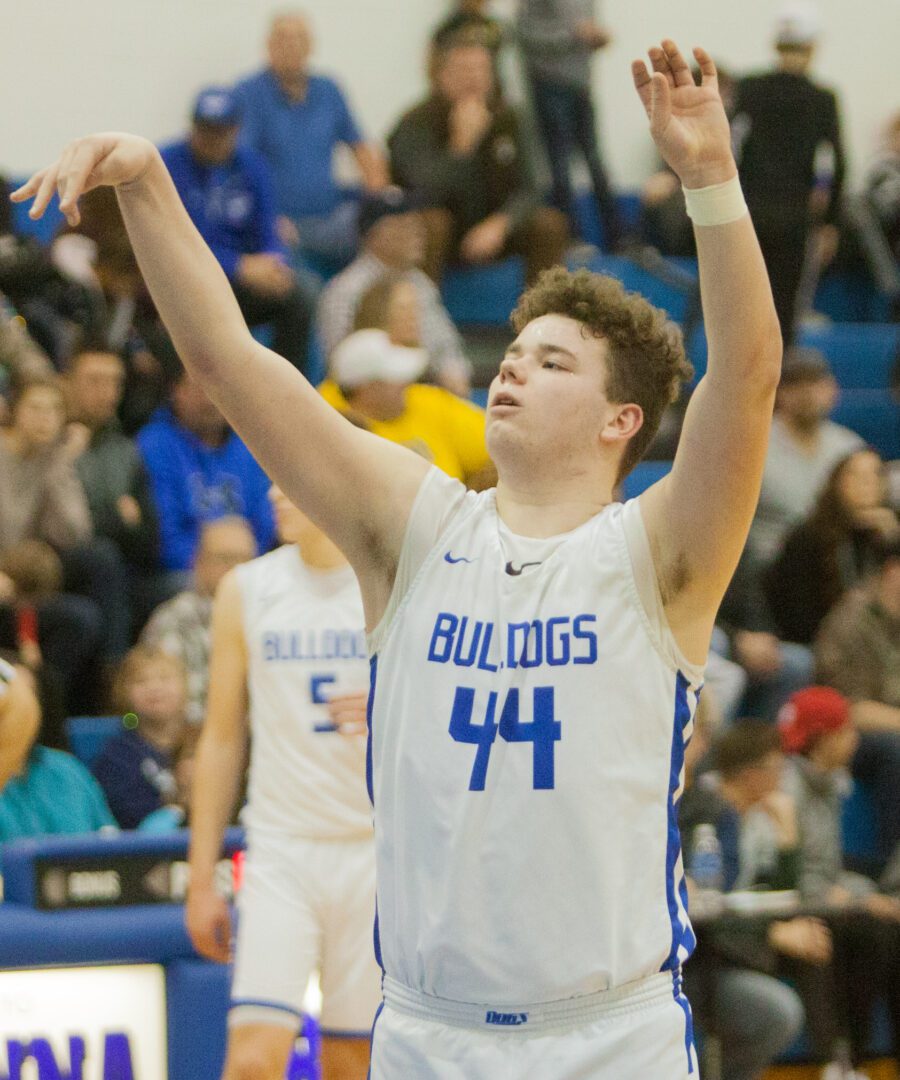 Another one of Ravenna’s best athletes on the court is 6-4 forward Calvin Schullo, who had an All-State season last fall as the Bulldogs’ leading receiver in football. Schullo, along with 6-3 forward Hunter Funk and 6-2 forward Jack Emery, create a lot of matchup problems and help the Bulldogs thrive defensively.

Kemp also mentioned the emergence of guards like Trevor Sterken and Connor Kilbourne, who have eased the loss of Cox. Dom Jones has been another solid shooter at guard, the coach said, making teams pay if they want to clog the paint.

Ravenna will be tested by a lot of strong teams in the West Michigan Conference, and will have to fight hard to stay on top of the standings.  The Bulldogs will also be in a challenging Division 3 district tournament in March, with strong teams like Western Michigan Christian and North Muskegon, but Kemp said the Bulldogs have what it takes to achieve big things.

“Our biggest thing is staying humble,” he said. “I understand we don’t want to lose track of what we’ve created, but we have to realize we have to stay the course and keep our heads on our shoulders. We’ve had moments of inconsistency, and North Muskegon reminded us of that in one half (on Jan. 10). We almost let one slip away. If we want to achieve all of our goals, we can’t have letdowns.”