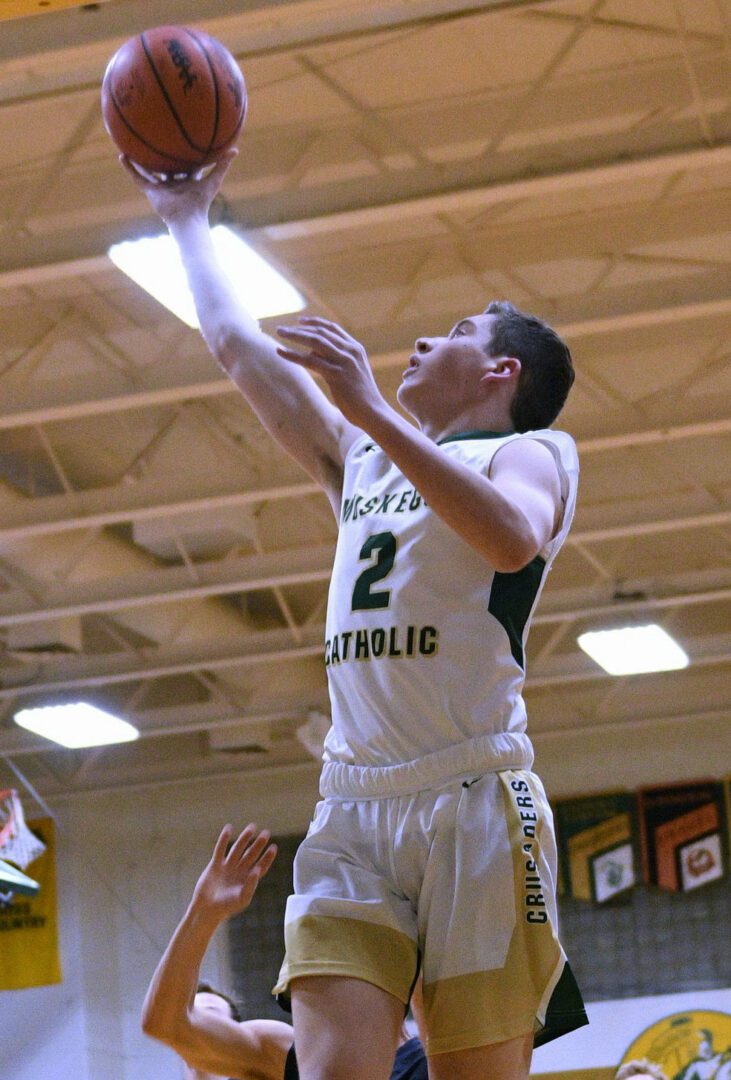 MCC senior Dugener glides in for a layup. Photo/Michael Banka

That’s because their star senior guard, Jared Dugener, says he developed into the player he is today because he was pushed and inspired by a Western Michigan Christian graduate.

Granted, that WMC player is also his older brother, Nate Dugener, who was a sharp-shooting guard for the Warriors from 2014 through 2016. So despite the schools’ fierce rivalry on the hardwood, the Crusaders and Warriors can both find solace in the fact that the Dugeners have helped both sides.

“I’d say the two people who have meant the most to me concerning basketball have been my dad (Matt) and my older brother,” Jared said. “They’ve both really pushed me to be the best player that I can be, since I was a little kid.

The inspired 1-on-1 battles and games of HORSE throughout the years, between Jared and his father and brother, have paid off quite well.

Following his 31-point performance on Tuesday in a 55-41 victory over Fruitport Calvary Christian, the 6-foot-2 Dugener is now just 189 points shy of 1,000 for his career.  According to Crusaders’ head coach Lamar Jordan, if Dugener reaches the milestone, he would be just the second player in program history to achieve the honor, joining Jared Vendal, a 1997 graduate who finished with 1,010 points.

Jordan recognized Dugener’s talent at an early age because he had the opportunity to coach him during his seventh- and eighth-grade seasons.

“I was able to coach him both years, along with my assistant Jamicah Cooper,” Jordan said. “From the start, what stood out was that he could always shoot compared to the other kids. We realized pretty early he had a chance to be a special basketball player.” 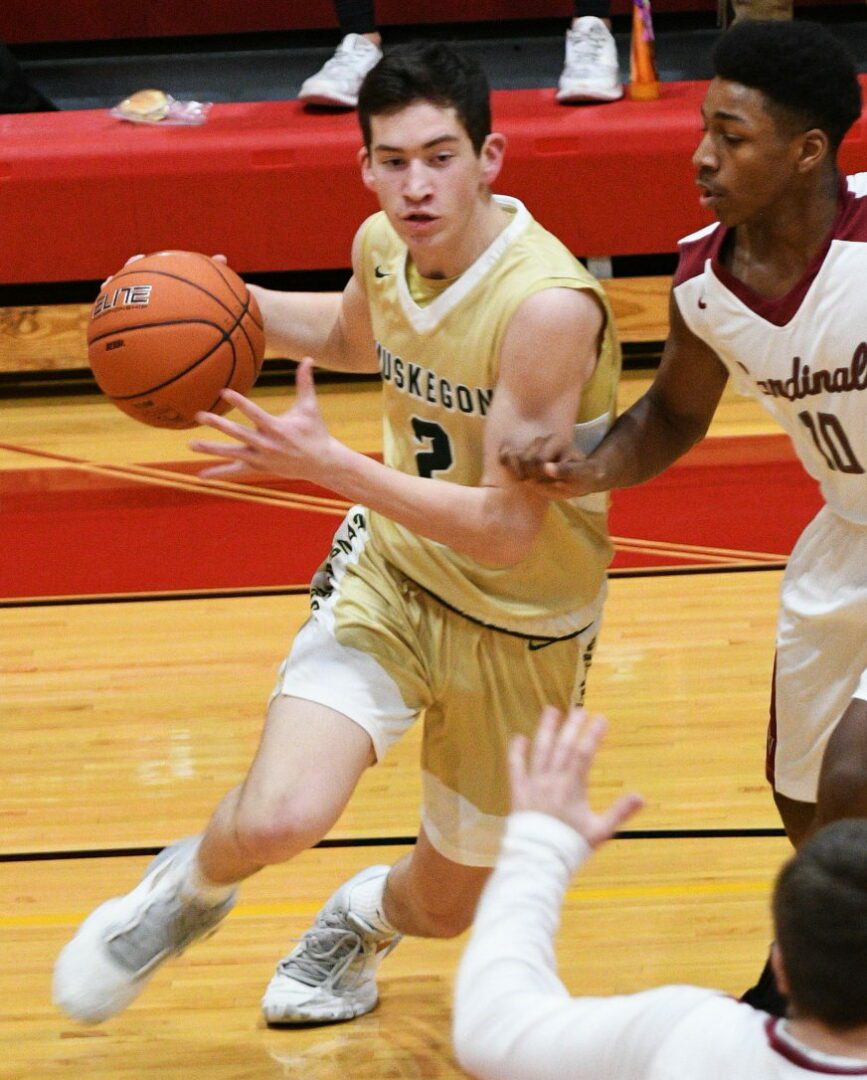 Dugener was called up for tournament time as a freshman, and spent his entire sophomore season at the varsity level, when he showed glimpses of being a feared scorer.

It all came together last season, when Dugener averaged over 20 points per game and was named second-team All-State in Division 4 by the Associated Press.

Jordan said Dugener’s growth boiled down to getting bigger and stronger, and getting used to the physicality of varsity basketball.

“He spent a lot of time in the weight room and got stronger,” Jordan said. “His junior year, you started to see him being able to finish at the rim with contact. That’s the area he’s progressed the most. But his shooting has always been there.”

Dugener said he takes pride not only in scoring, but also getting his teammates involved.

“I like to label myself as an all-around player,” he said. “I try to be the facilitator out there and find the open man. I want to be a team leader.”

MCC had to find other leaders earlier this season, because Dugener was knocked out of action for the Crusaders’ opening two games with a sprained ankle. He suffered the injury while landing awkwardly during a preseason scrimmage against Oakridge.

“It gave some of our younger players some experience, which can help us down the road,” Dugener said about the games he missed. “Guys like Seth Arends and Carson Bleicher were both able to put up some points and make a difference.” 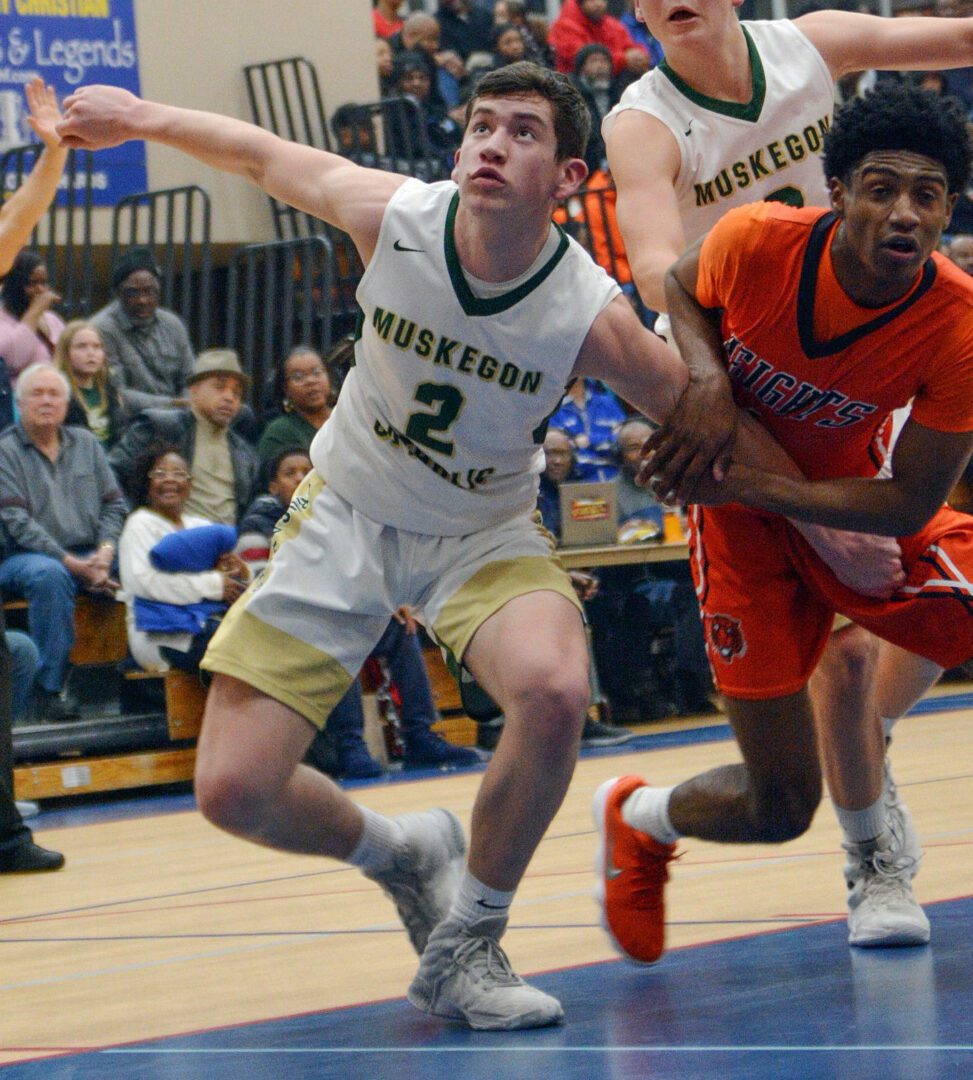 Still, it will be Dugener who the Crusaders will rely on to pull them out of their slow 2-3 start.  Last year Dugener was able to share the scoring load with fellow standout Andre Watson, who graduated last spring.

This year’s team features a young roster, including four sophomores and one junior, so the senior guard will be counted on for a lot of points and leadership before he graduates and heads off to college, where he plans to continue his basketball career.

“I do believe he has the skill set to play at the next level,” Jordan said. “This is my eighth season as head coach at MCC, but I’ve been here since 2005 as an assistant. I’d say Jared is one of the best players I’ve coached in my life.”

Jordan said Dugener has drawn interest from area Division 3 college programs like Hope College and Aquinas College, but the front-runner now may be Eastern University, a D3 school located near Philadelphia.

“I took a visit and really liked the school,” Dugener said. “The campus is really nice and I got a chance to meet the players and coaches and really hit it off.”