Bill Zalba stuck around after Fury playing days, to the benefit of the R-P hockey team

the 2009-10 season and gave way to the modern-day Muskegon Lumberjacks, an elite junior development squad. 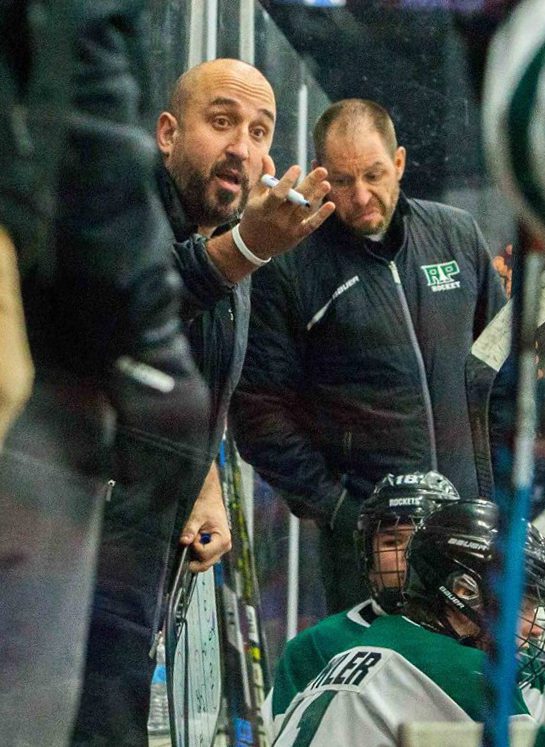 Zalba talks to his team from the bench during a game at L.C. Walker Arena earlier this season. Photo/Joe Lane

But pro hockey left a valuable legacy in this area, in the form of former players who grew up elsewhere – many of them in Canada – but found Muskegon to their liking and put down roots.

One of the old pros who stuck around was Bill Zalba, a forward for the old Muskegon Fury. The people in charge of the Reeths-Puffer High School hockey program are sure glad he did.

Zalba recently completed his third season as head coach of the Rockets, and it’s been an exciting uphill climb.

The Rockets were 5-21 in his first season on the job. They improved to 13-12 in 2018-19. This season the team pulled it all together, posting a 17-6-2 record, winning conference and regional championships, and advancing to the Division 1 state quarterfinals.

The kids on the Reeths-Puffer squad definitely benefitted from the expertise of the guys who used to play for a living.

“When you think about all the years of experience that we have on our bench, all of the things that our coaches have been through, and what they can offer the kids from a playing perspective, I don’t think there is a coaching staff in the state that can match what we have,” said Reeths-Puffer Athletic Director Tony Schmitt.

He started out figure skating

Zalba, 37, grew up in Thorold, Ontario, a town not far from Niagara Falls. Unlike man6 Canadian boys, he did not come from a family with a big hockey background, and his first experience in the ice did not involve hockey skates. 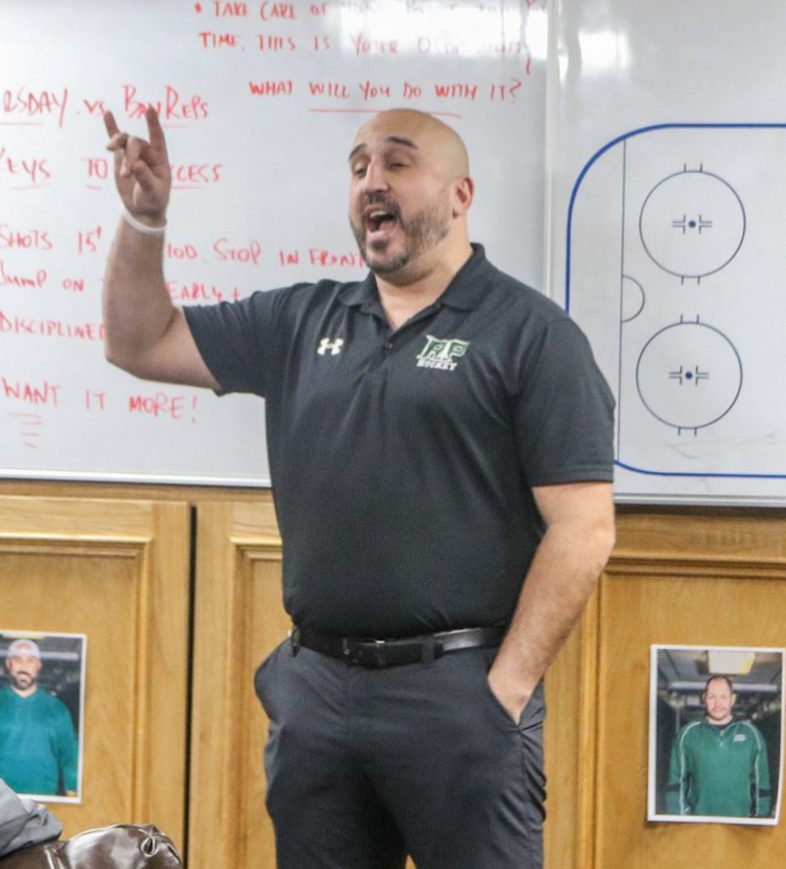 During a break between periods, Zalba talks to his team in the locker room. Photo/Joe Lane

“My sister was a figure skater,” Zalba said. “I went to learn to skate with her. I started figure skating when I was three. I used to rip around the ice with her, then I put on hockey skates, and the rest is history.

“I tell a lot of people this – figure skaters are definitely better skaters than hockey players. My sister is definitely a better skater than me. Whenever she comes here, she brings her skates, and she still kicks my butt.”

Zalba had success in youth hockey, and as a teen was drafted into the Ontario Hockey League, one of the elite junior developmental leagues in North America.

He played three years in the OHL, but was not drafted by an NHL team. His hockey career was on hold until 2003, when he visited his sister, who by then was married and living in Coldwater, Michigan.

That visit led him to his first professional hockey experience, in the United Hockey League with the old Kansas City Outlaws in the 2004-05 season

”I was 21, I think, and my sister took me to a Kalamazoo Wings game,” Zalba said. “I said ‘I can do that,’ and I got a tryout with them the next year. I didn’t make it, but I had a buddy who was trying out in Kansas City, I got a tryout there, and I made the team. 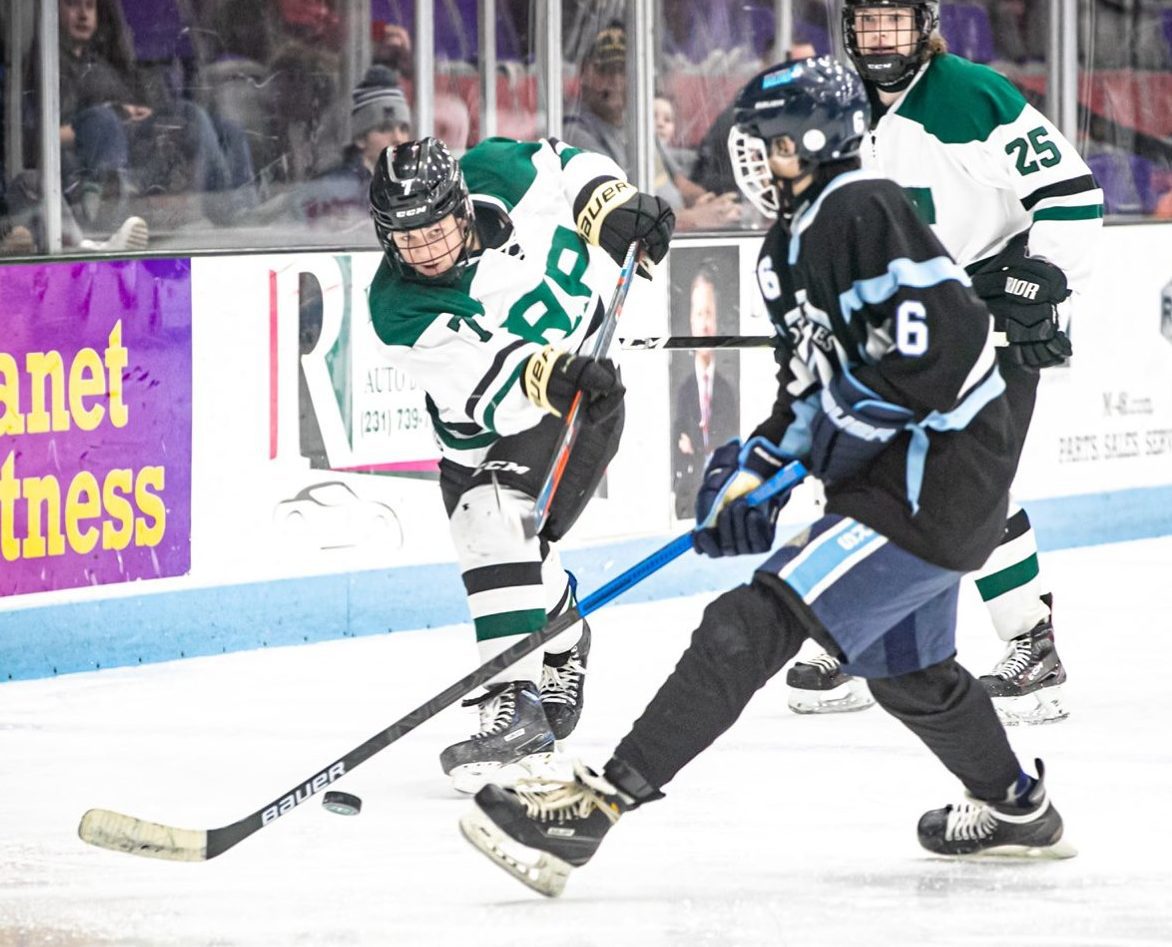 Gavin Viereck sends in a shot from near the blue line for Reeths-Puffer. Photo/Tim Reilly

“I scored the first goal in the Kansas City team’s history. After I scored they took my stick and the puck and sent them to the hockey Hall of Fame in Toronto. It was on display in the minor league section for a while.”

Despite that accomplishment, Zalba’s career in Kansas City was short-lived. He was traded to the Muskegon Fury in mid-season, and headed to a town that meant little to him, presumably for a short period of time.

“I didn’t even know the trade happened at first,” Zalba said. “I saw it on the internet. We had actually played in Muskegon about a week earlier. Todd Nelson was the coach here at the time, and I guess he liked the way I played.

”I just figured I would go to play in Muskegon for three months. I never dreamed I would be here 15 years later. I turned out to be a pretty good trade in my life.” 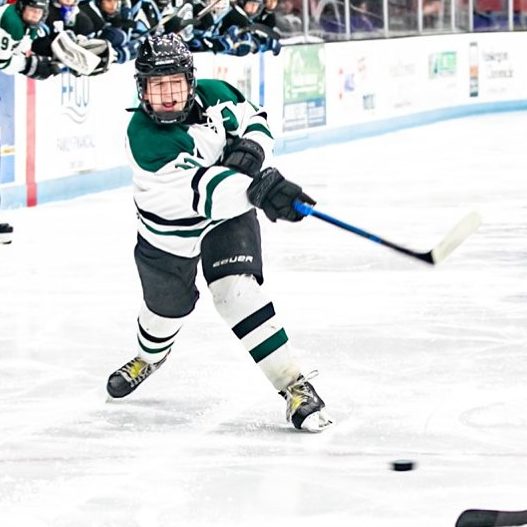 “I fought quite a bit,” he said. “It was my way to stick around. I had to stick up for the guys who shouldn’t have to fight. It was not my favorite role, but I did OK.”

Ironically, he was in a Fury fight the first time his wife, the former Tracy Trombley, noticed him.

It happened during his first season with Muskegon, when the Fury were playing the old Motor City Mechanics. Tracy and her family were fans, and just happened to be at that game.

The National Hockey League had a labor lockout that season, so several players from the Detroit Red Wings, including Chris Chelios, were biding their time and staying in shape by playing for the Mechanics.

“There was a fight behind the net, I got paired off with (Red Wing) Sean Avery, and I took two punches to the side of the head,” Zalba said. “That night we went for a few beers at DJ’s Pub. Tracy was there as well, and she knew (Fury star) Todd Robinson. She asked Todd, who was that guy who got beat up in the game? Well, that was me.”

Zalba left the Fury after the 2007-08 season. He played part of the next season with the Kalamazoo Wings, moved on to the Richmond Renegades of the Southern Professional Hockey League, then returned to the renamed Muskegon Lumberjacks for the playoffs in the spring. 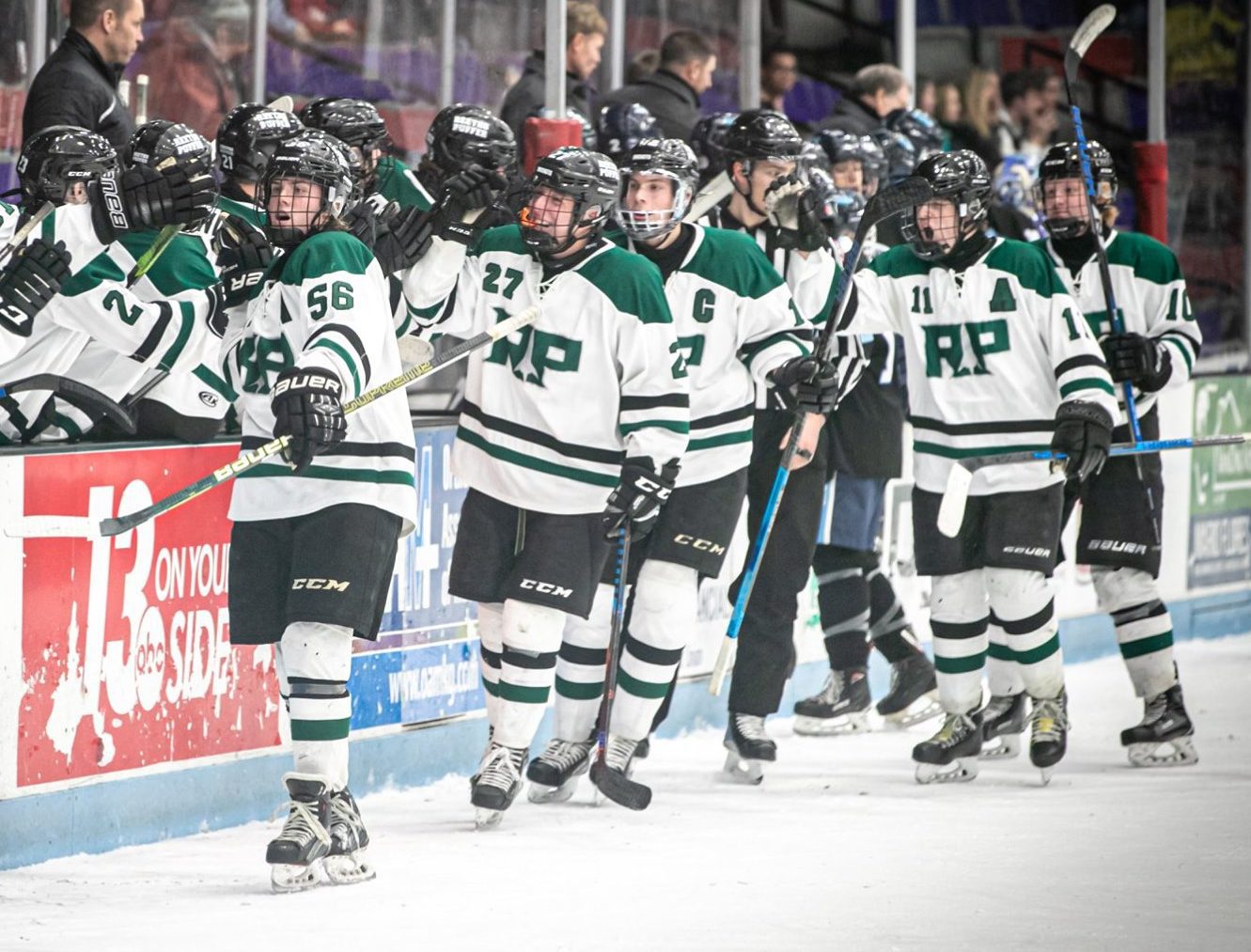 Reeths-Puffer’s No. 56 Matt Herniman leads the celebration after a goal. Photo/Tim Reilly

At that point he said goodbye to professional hockey.

Zalba and Tracy were married in 2009, just after he returned from Richmond. He took a job in Chicago and played a little hockey on the side, but the young couple’s stay in the Windy City did not last long.

“We had no family there, our daughter was born, there was nobody there to help with babysitting, and we wanted to be closer to family,” Zalba said. “It was not an ideal situation. It just made more sense to come back home.”

Settling down, coaching the Rockets

Back in Muskegon, Zalba pursued several non-hockey jobs. He spent some time as a car salesman at Betten Baker, as a supervisor for the United Parcel Service, and as a fitness director at Family Fitness gyms.

These days his life is far more settled. Zalba and Tracy live in Roosevelt Park with their children, daughter Aly, 10 and son Zak, 3. He works full-time for Bob’s Roofing, doing residential sales. 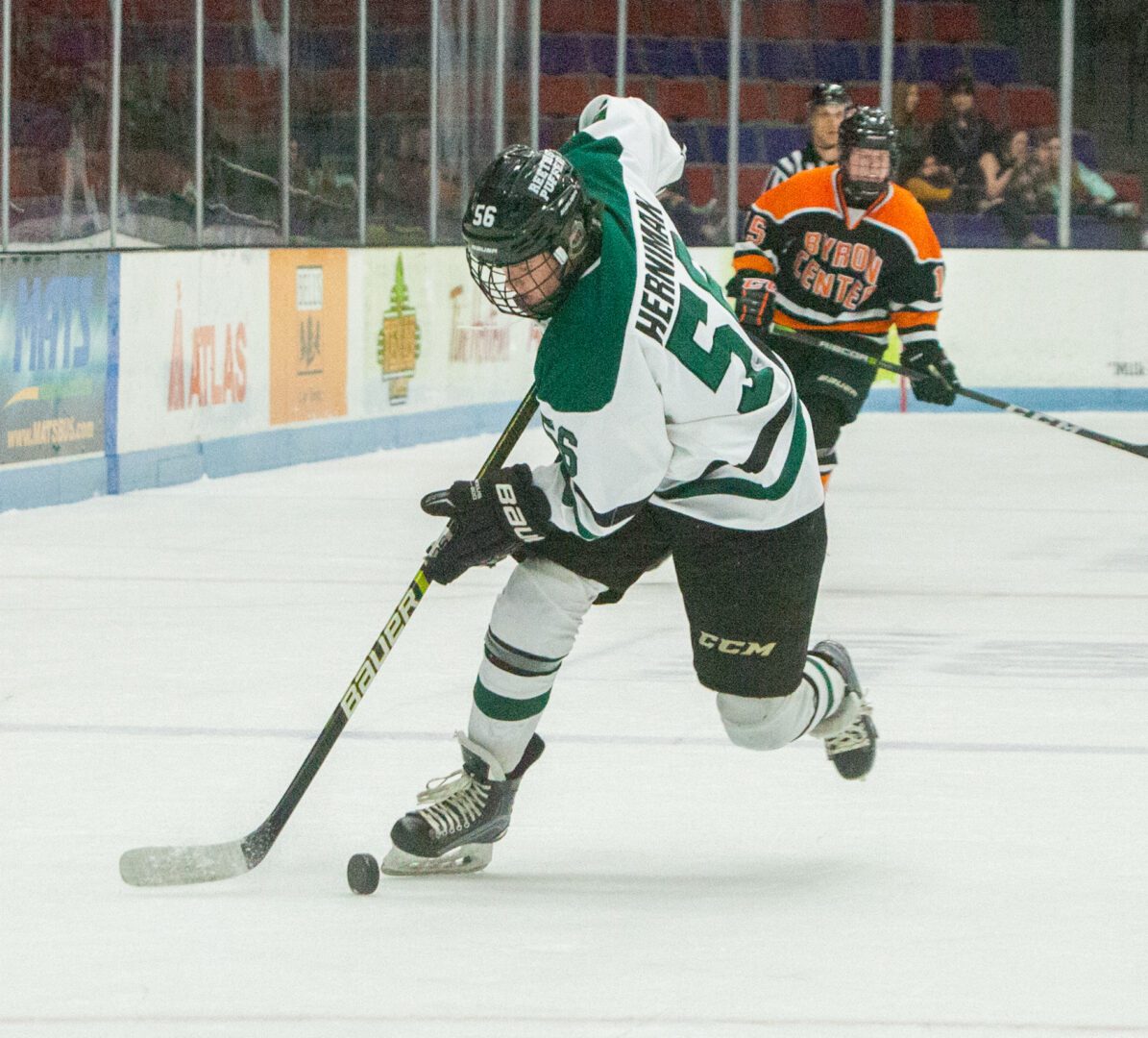 Matt Herniman tries to get on the attack for Reeths-Puffer. Photo/Jason Goorman

His coaching career started taking off a few years ago, when he coached a pre-varsity team of players from throughout West Michigan. That led to the job coaching the Reeths-Puffer varsity team, when it opened up three seasons ago.

For the past two years he’s also been the hockey director for the Muskegon Junior Lumberjacks, a youth organization that includes six junior development teams comprised of players between the ages of 4 and 18.

Zalba said he couldn’t be happier with his career at the moment. He said he loves working for Bob’s Roofing and the Junior Jacks, and had the time of his life coaching Reeths-Puffer this season.

The Rockets, a co-op team that also had players from Muskegon Catholic, North Muskegon, Whitehall and Montague, roared out of the gates in 2019-20, winning their first three games over East Kentwood (9-0), Kenowa Hills (5-3) and Lowell (3-0).

Along the way they knocked off traditional rival Mona Shores 5-4 in overtime, and beat Grand Haven 5-1 in the championship game of the Stan Konrad Memorial Tournament in Muskegon. They beat Grand Haven again, 8-1, later in the season. 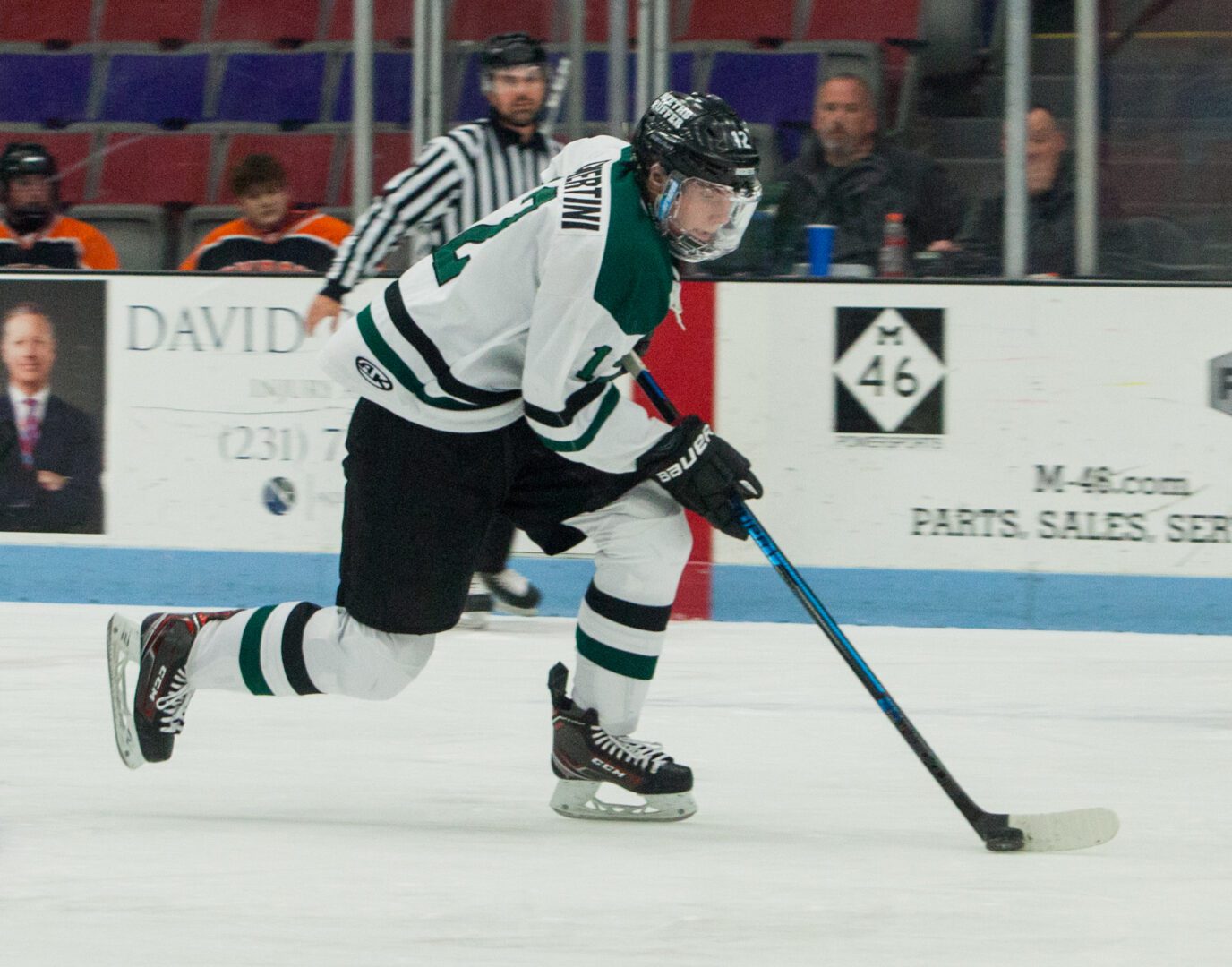 The Rockets finished with a regular season record of 15-5-1 and won the Rue Division championship in the O-K Conference.

They performed exceptionally well in regionals at Mercy Health Arena in Muskegon, beating Traverse City St. Francis 3-2 in the semifinals and Traverse City West 3-1 in the regional championship game.

“Winning that at home is something nobody can ever take away from them,” Zalba said about his players.

The season came to a painful end on March 7 in the state quarterfinals at Ferris State University, when Reeths-Puffer fell to Byron Center 5-1.

But the loss could not erase a great season for the team.

“My seniors and the other guys were emotional (after the loss), but they understood that they did something that hadn’t been done at Reeths-Puffer in seven or eight years – that’s huge,” the coach said.

“It was disappointing, but to be honest, they were better than us. We scored the first goal of that game, but did not have a lot after that. I have no regrets over how it ended. It fuels me to try to be better next year.”

The Rockets also got great goaltending from Nick Meyering, who posted a 15-4 record with a sparkling 2.21 goals against average.

“I knew coming in that this was the best team we’d had in terms of hockey IQ,” Zalba said. “We had the right players. We just needed a few guys to step up. We asked guys like Meyering, Herniman and Klint to take another step to be better, and they did. Once that happened, I knew there was a possibility of making a run, and we did.”