MORLEY  – The Kent City girls basketball program has become a powerhouse over the last three seasons.

But each season has ended a bit earlier than the Eagles would have liked, due to Pewamo Westphalia, a team with multiple state final appearances and a state title in 2019. 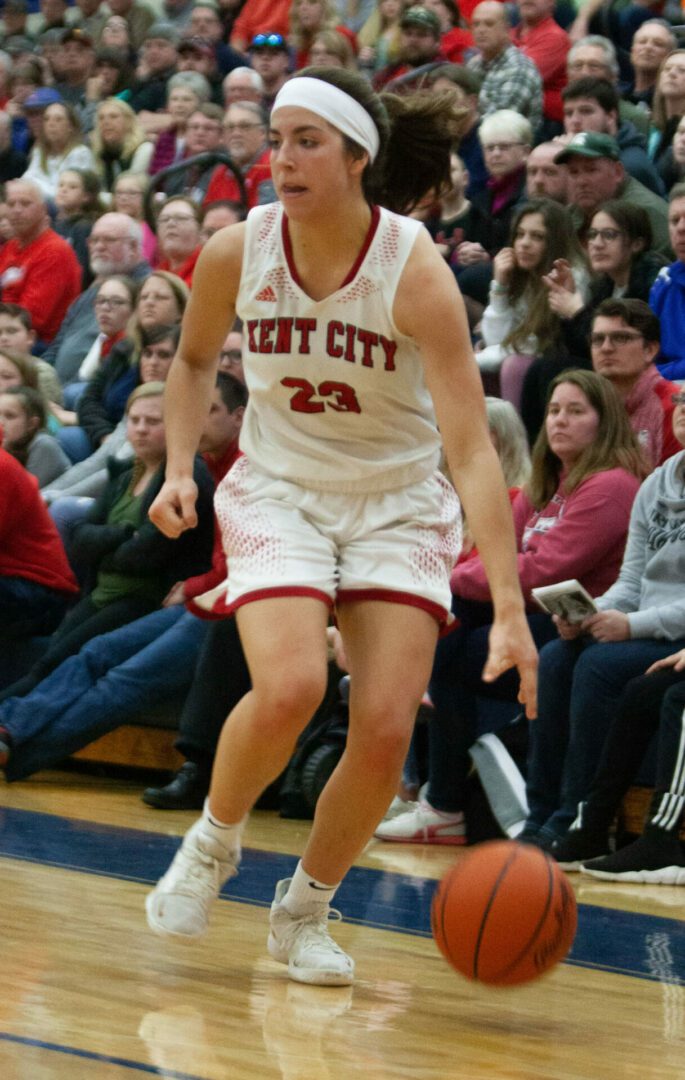 Kenzie Bowers brings the ball to the corner for the Eagles. Photo/Jason Goorman

On Tuesday night, Kent City’s “Pewamo problem” continued in a heartbreaking 40-37 loss to the Pirates in the Division 3 regional semifinals at Morley Stanwood High School.

The game had another exciting finish, just like last year.

With 41.2 seconds left and the score 40-37, the Eagles had the ball and a chance to tie. Star junior Kenzie Bowers dribbled around looking to attempt the game tying three-pointer, before eventually passing to her sister Lexie Bowers, after realizing her shot attempt would be blocked.

Lexie Bowers put the shot up, but it fell short and into the hands of a Pirate defender under the basket,  who held the ball for the final five seconds as the clock expired.

“I wanted it,” said Kenzie Bowers about taking the game-tying shot. “But I couldn’t get it off. I got it to my sister and was saying “Get it to me, get it to me,” but she got it off and it just wasn’t quite there.”

The loss marks the third straight season that Kent City has lost to Pewamo Westphalia. In 2018, the Eagles lost in the Class C quarterfinals, and last season it happened in the regional semifinals.

“I liked that they won the state title last year, because we did everything to beat them last year except the last 20 seconds of that game,” said Kent City Coach Scott Carlson.

“To lose four of our top six girls and come back this season and put up the fight we did tonight, when they returned almost everyone, I was proud of my girls.”

The Eagles started the game hot, shooting 70 percent from the field in the first quarter and holding a 13-10 lead behind seven points from Jenna Harrison. 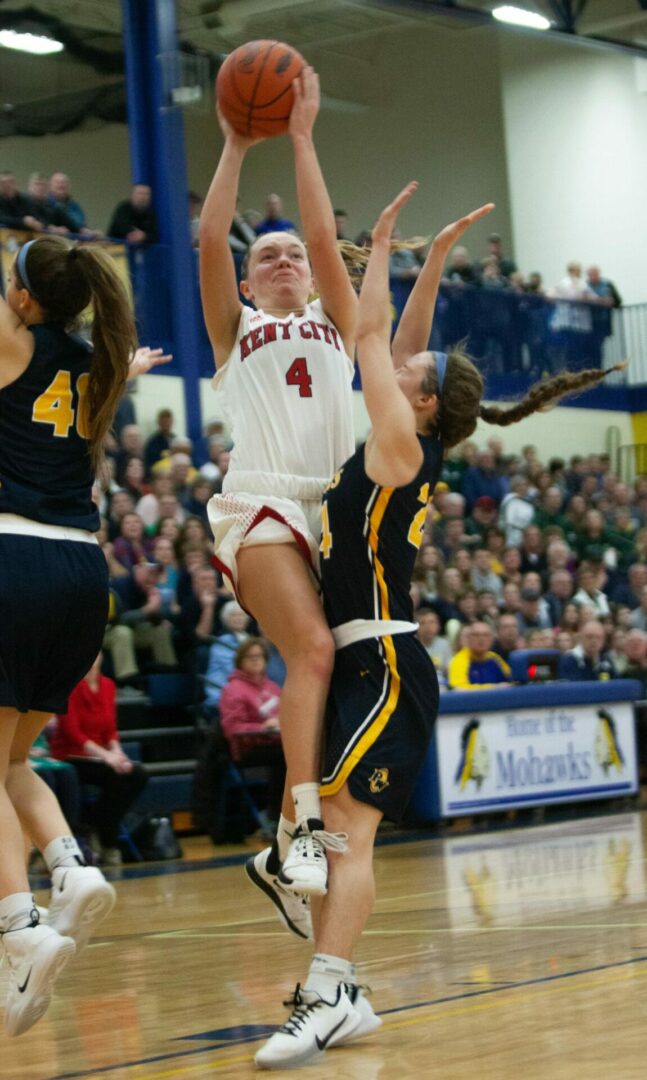 With five seconds left in the second quarter, Bowers flipped in a lay-up to give Kent City a 22-21 lead, which looked to be the halftime score, until a half-court buzzer-beater by PW’s Elle Droste went in, giving the Pirates a 24-22 lead at the break.

“I’m just disappointed we didn’t turn around and play defense,” Carlson said about the final stretch of the second quarter. “Their crowd counted down early and we scored. But there was about four seconds left and my girls thought it was halftime.”

The third quarter was pretty even and the Pirates led 32-29 heading into the fourth.

Pewamo Westphilia opened up the fourth quarter with a 5-0 run to take a 37-29 lead, before Carlson called time out with 5:33 remaining.

Kenzie Bowers netted the first Eagles basket of the fourth when she drained a three-pointer with 3:33 remaining to cut the deficit to 37-32.

Following a Pirate bucket, Bowers hit another three-pointer with 1:50 remaining to make the score 39-35 with 1:50 left.

The Pirates missed the front end of a 1-and-1, and Kent City had a chance to tie the game, but the final triple attempt fell short.

Kenzie Bowers led the Eagles with 21 points while Harrison finished with 12.

Pewamo Westphalia was led by Kierra Thelen with 12 points while Droste netted 11 points and Emily Nurenberg had 10.

The Pirates will next face Ithaca on Thursday at 6:30 p.m. in the Division 3 regional final at Morley Stanwood.

The Eagles will lose four seniors from their team next season, but Kenzie Bowers is hopeful that yet another loss to Pewamo Westphalia will refuel the squad next winter.

“I think it’s upsetting,” said Kenzie Bowers, whose team finished each of the last two seasons with 22-2 records. “We were right there, and we wanted it. We knew we’d play a good game with them, but this is going to make us work even harder for next year.” 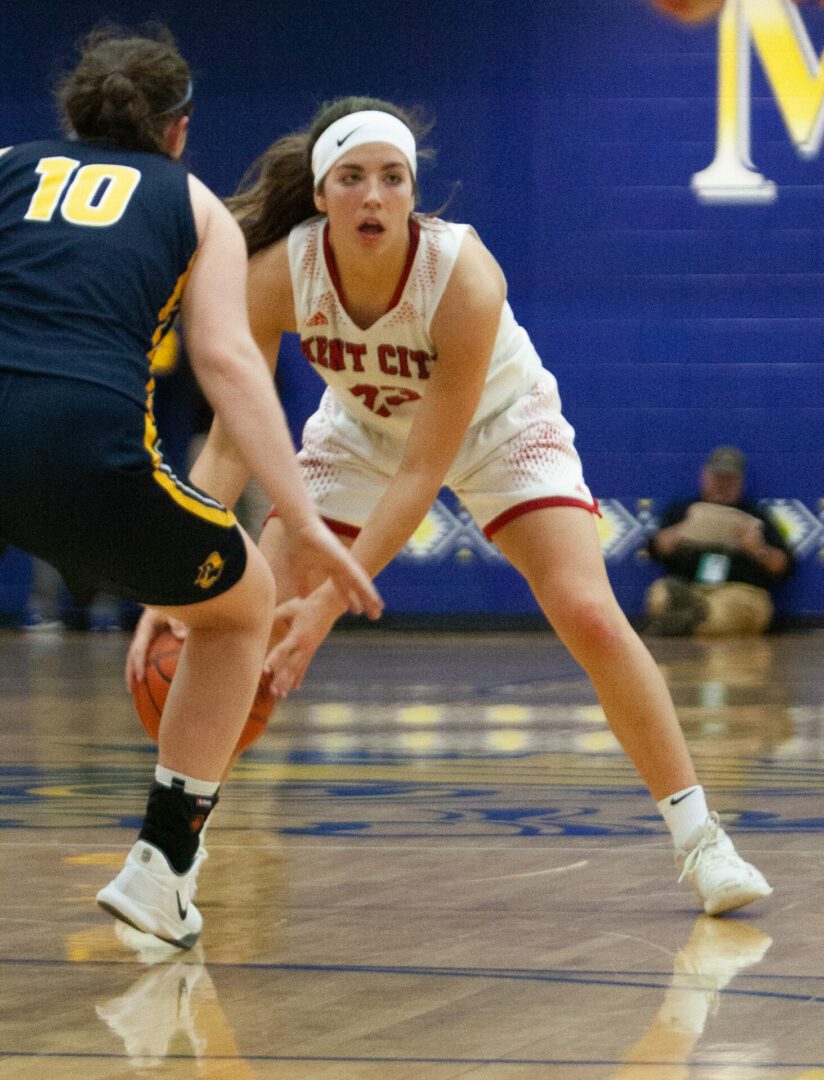 Kent City’s Kenzie Bowers waits for the play to develop from the top of the key. Photo/Jason Goorman 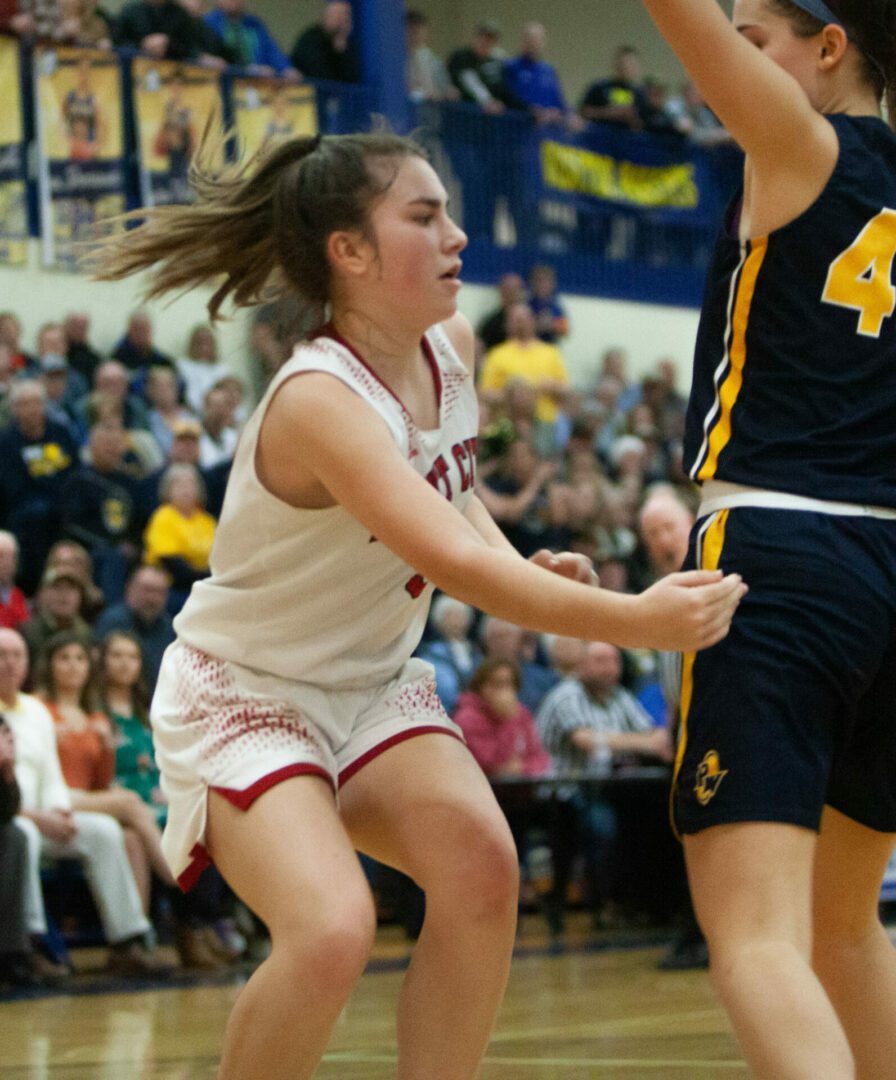 Lexie Bowers makes a pass around an Ithaca player during the fourth quarter. Photo/Jason Goorman

Whitecaps heating up during home stand with victories over Lake County, Dayton