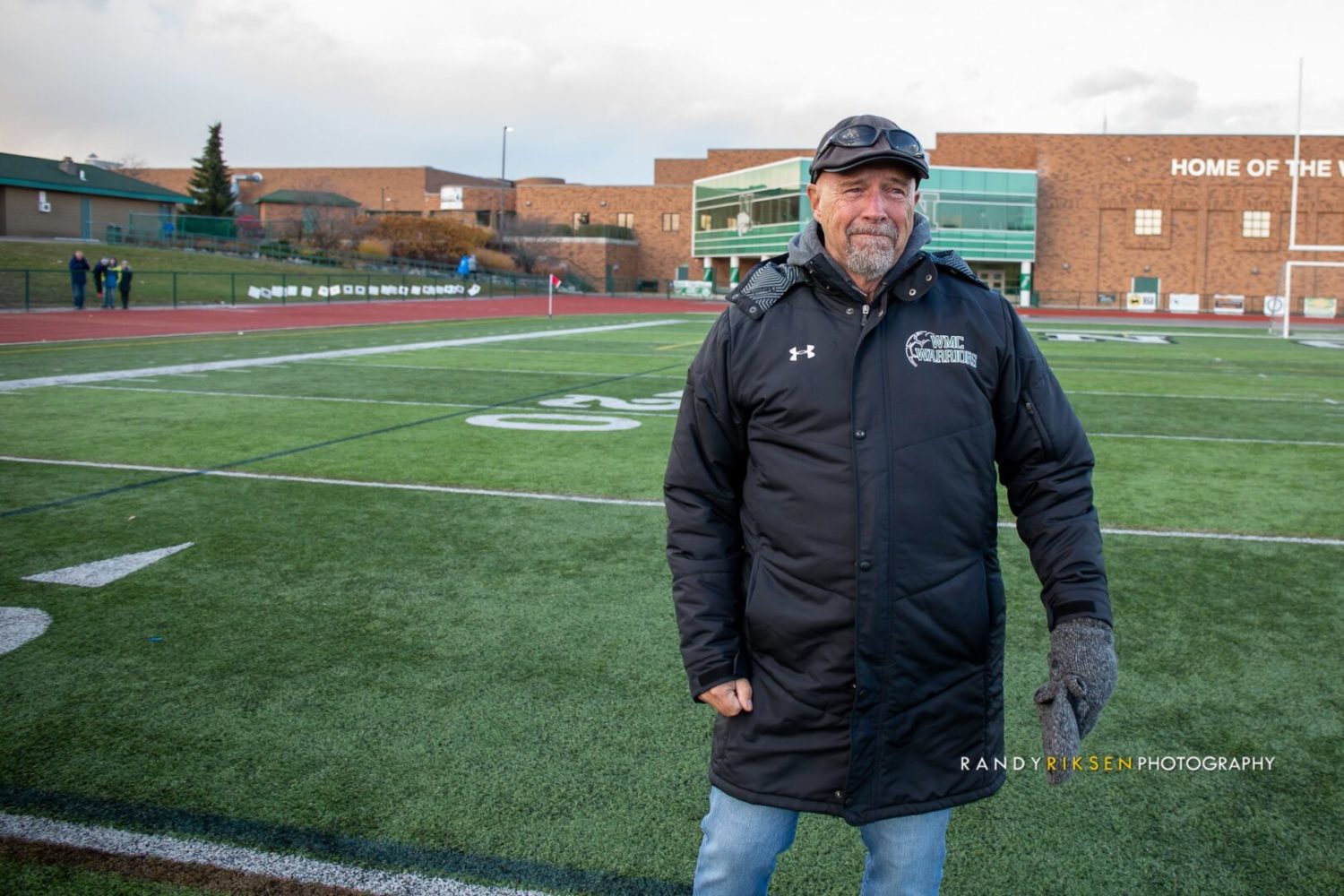 NORTON SHORES – What high school coach doesn’t dream of having his final game be a victory in the state finals? 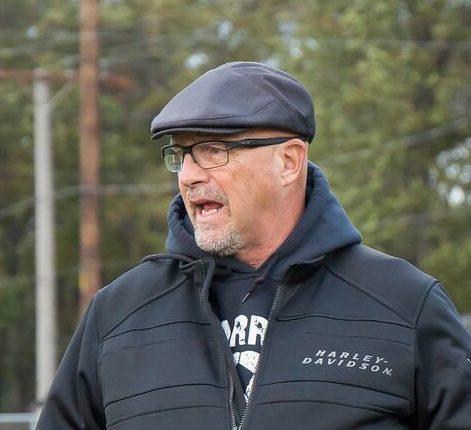 That turned out to be the case for Dave Hulings – and it was very exciting and rewarding – but it wasn’t the way he planned to go out.

Last fall Hulings coached the Western Michigan Christian boys soccer team to a Division 4 state championship with a thrilling 1-0 victory over Grosse Pointe Woods University Liggett in an overtime shootout. It was his third state title with the team.

This spring he was planning to do what he always does when the snow melts – coach the WMC girls varsity squad – which has also had a lot of success over the years.

Just before the girls season started, Hulings announced that it would be his last, and he would retire from coaching altogether when it was over. He was counting on one more season of fun before he walked away, after 25 years of coaching girls and boys varsity at two different schools.

But week Hulings and his players found out officially that the season will not happen at all, due to the COVID-19 outbreak. Instead of having the final go-round he planned on, Hulings is now suddenly retired, a few months earlier than expected. 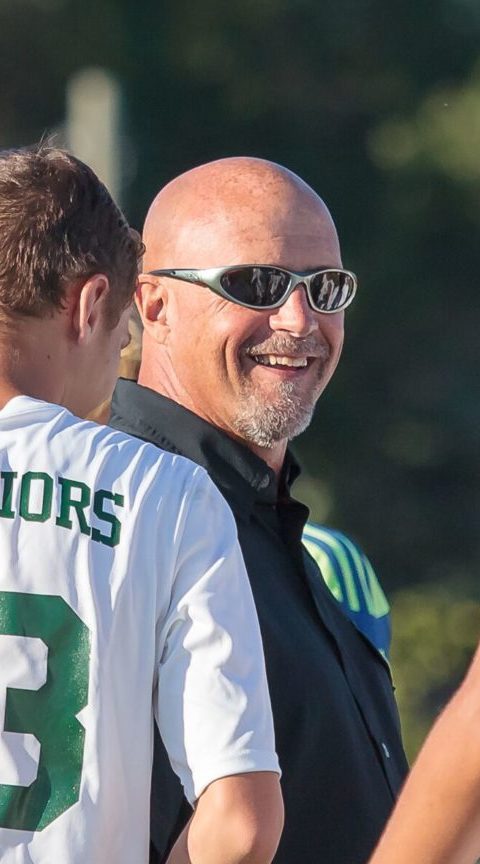 He was philosophical about the situation, understanding that sometimes unfortunate things happen in life. He was more concerned about the players, particularly the seniors, who will not get to enjoy their final year on the field, representing their school.

“My immediate concern was for my seniors,” said Hulings, 65. “I was actually going to stop after last year (with the girls team) and then make the boys this past fall be the last season. But it was the juniors (at last year’s girls soccer team banquet) who came up to me and said they can’t wait for next year. That made me go home crying, so I kept going.”

After several weeks of preseason practice, Hulings said it was difficult to tell the girls that there would be no games this season.

“I did prepare them for it, but it didn’t sink in right away for them,” he said. “Three times I was able to end the season with a victory (in state championships games). But all the others were with a loss. But these girls don’t get a loss or a win to end their senior season. This game teaches kids a lot about disappointment, because losing hurts. But these senior girls don’t get the chance to go out like that.”

Hulings won big with every team he coached.

He coached the girls varsity team at Fruitport High School for 18 seasons, beginning in 1994. His Trojan teams posted a 213-118-25 record with 10 conference and six district championships.

He took over the WMC girls team in 2012 and had a 100-38-15 record in eight seasons, with six conference titles, five district championships and two regional titles.

Hulings had the most success with the WMC boys team, which he coached from 2005 through 2019, posting a 252-72-18 record over 15 seasons. Under his leadership the Warriors won three state championships, along with 10 conference, 10 district and 7 regional titles. 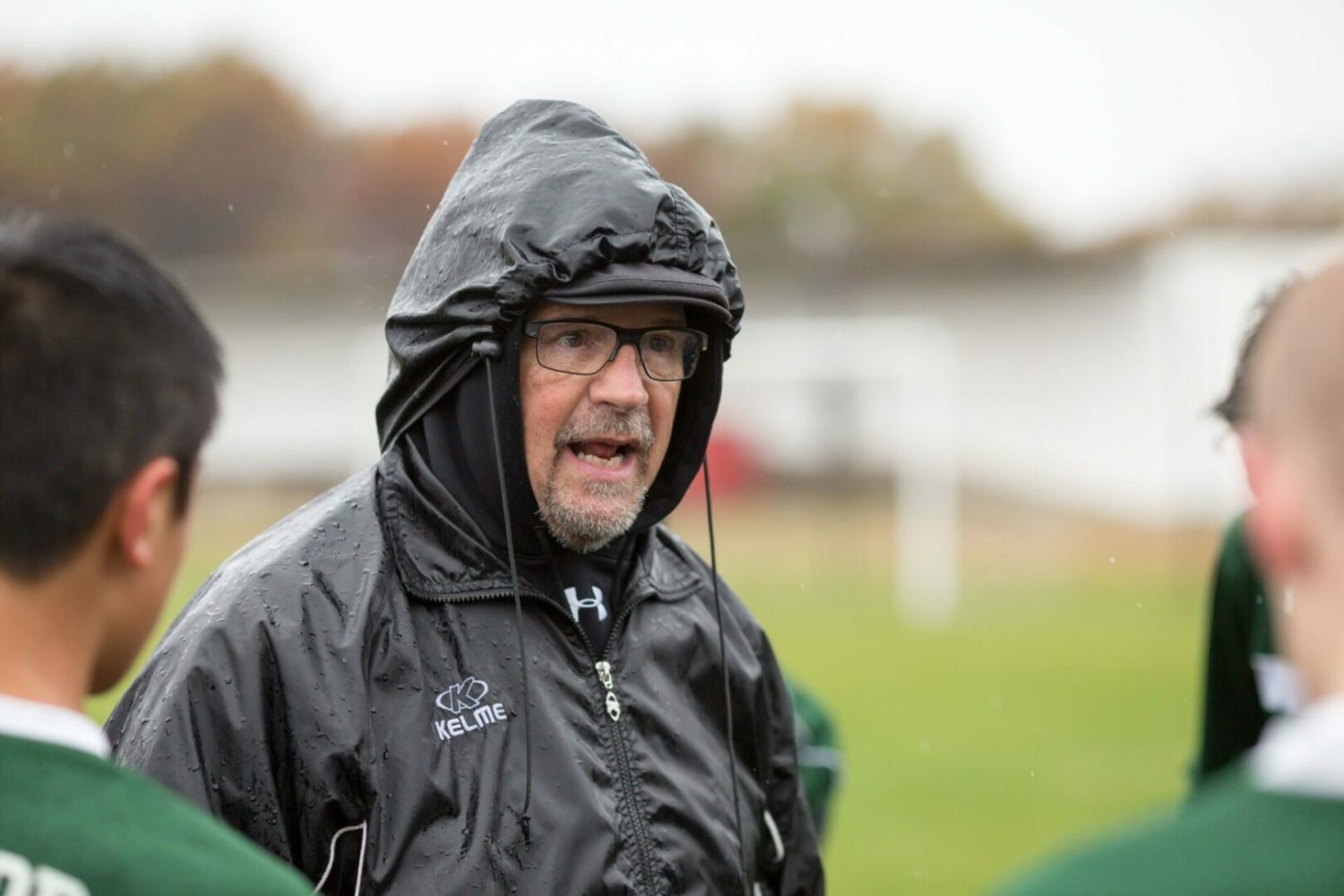 Neither of Hulings’ first two state titles were quite as exciting as last fall’s.

The Warriors started the state tournament with easy victories over Eau Claire, Hudsonville Libertas and Holland Black River. Then they beat North Muskegon and Calvin Christian (the top-ranked team in the state) in regionals, and Dansville in the state semifinals.

That led to the state championship game on Nov. 2 against Grosse Pointe Woods University Liggett at Novi High School.

The game, played in a strong icy wind, was scoreless after regulation and two overtime periods. That meant that the outcome would be decided by a shootout, with five players from each team taking turns going one-on-one with the opposing goalie from 12 yards out. 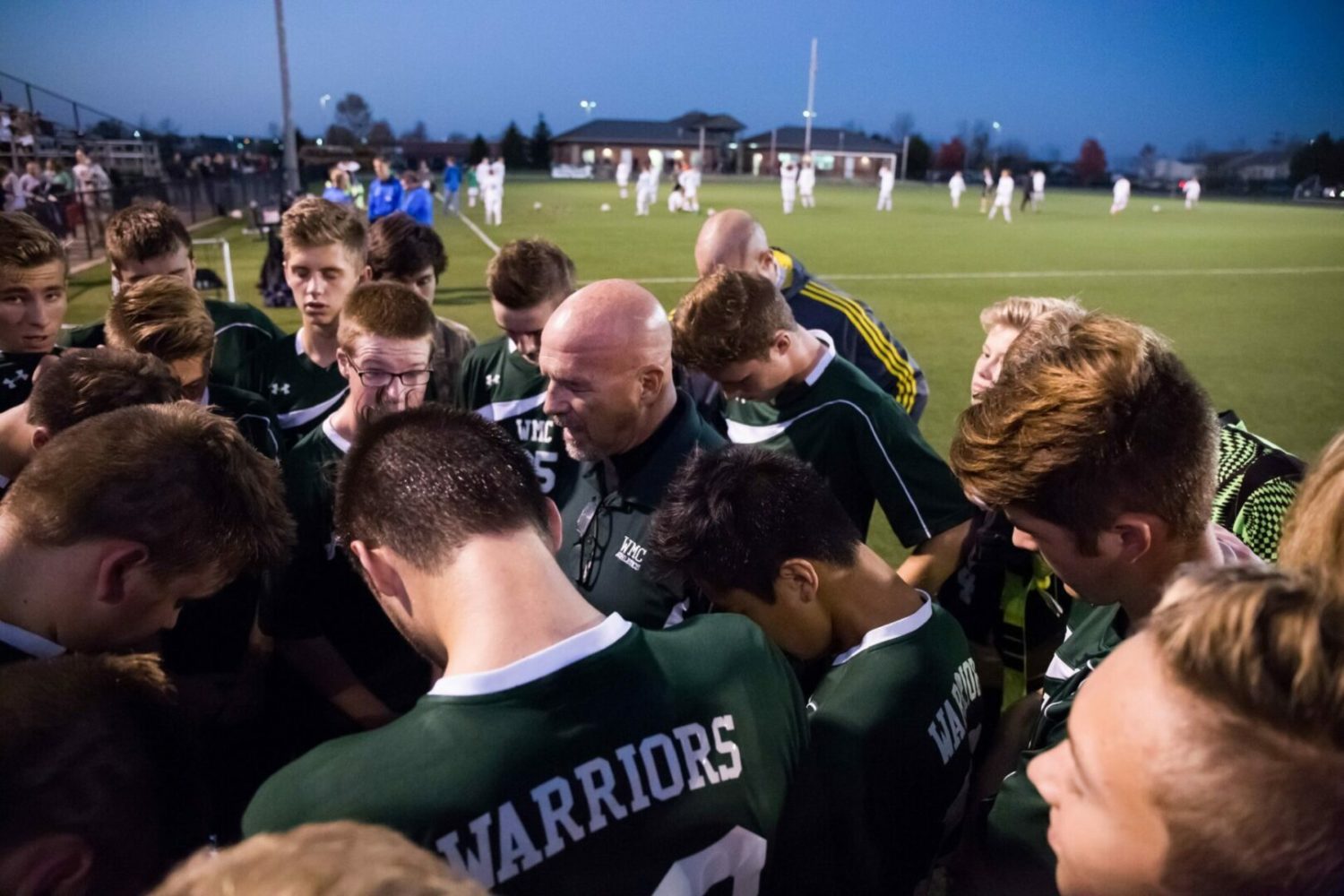 The odds are definitely in the shooter’s favor in that situation, but WMC All-State Goalie Jameson Goorman was more than up to the challenge. After giving up a goal to the first Liggett shooter, he made amazing saves on the last four, prompting Hulings to remark that he had never seen a goalie stop four out of five shots in a shootout before.

That allowed WMC to outscore Liggett 2-1 in the shootout and claim the dramatic championship. Brandon Fles and Isaac VanHoeven scored the two shootout goals for WMC.

“The good news is my last game was a win,” Hulings said. “Not many coaches get to have that. It was such a great experience in the fall. I would have rather have gone out in the girls season with a state title too, but now we’ll never know.”

Hulings said the thing he will remember most about the 2019 boys state title run was the way the players matured and dealt with challenge after challenge as the season went by.

“Those guys really didn’t think they could win a state title,” the coach said. “But when we lost to Whitehall 3-0 on Warrior Weekend (WMC’s version of Homecoming), I walked off the field and I told my assistant, this is going to be the best thing that happened. 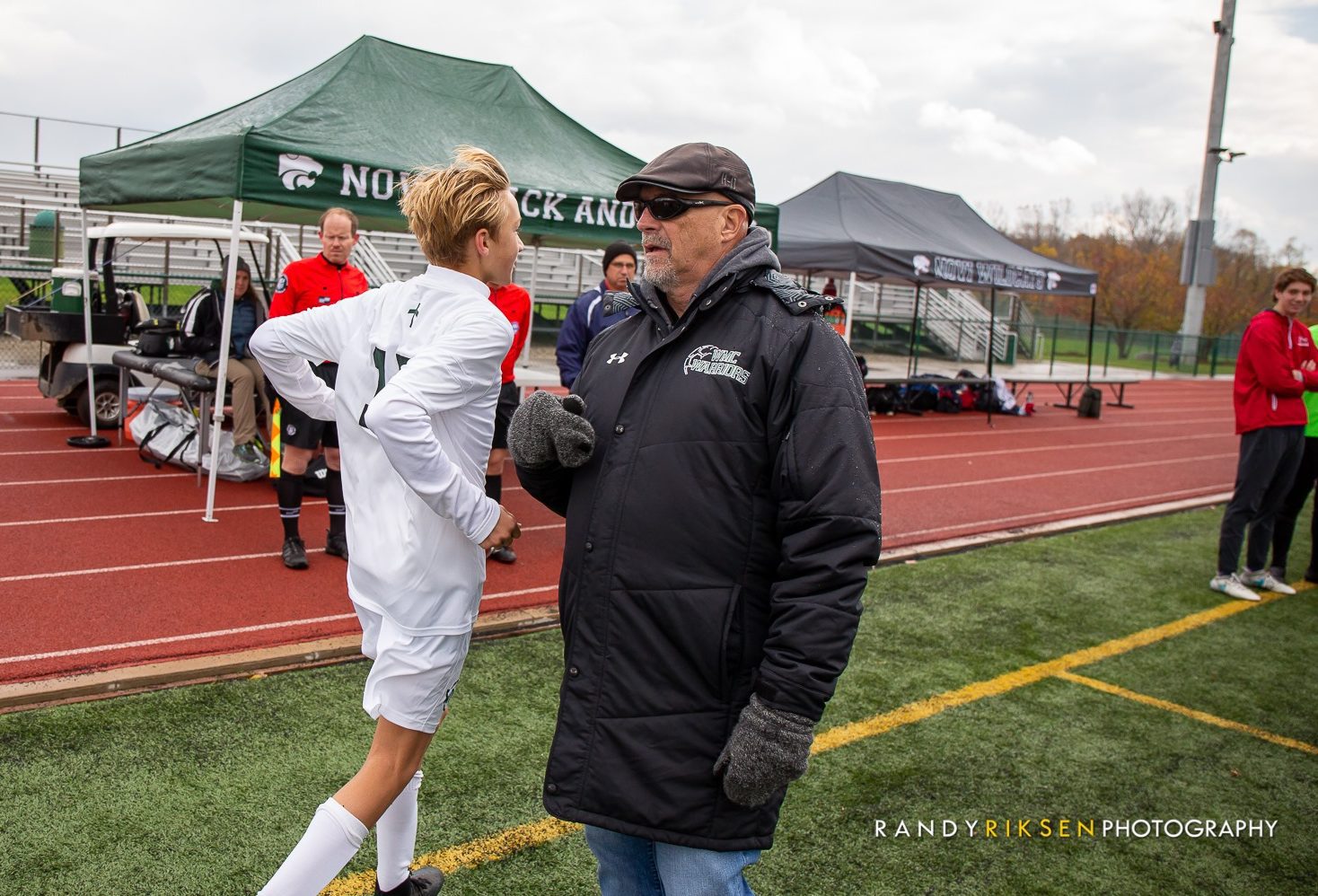 “I told the kids, you don’t lose on Warrior Weekend, but that was probably one of the greatest moments for that group of young men responded in a way that said they wouldn’t be a group of individuals anymore. We ended up beating the No. 1, 2, 3, 4, 6, 7 and 9th ranked teams in the state.

“We watched the captains become leaders and even the guys that weren’t leaders become leaders. They all of the sudden just grew up. When someone remarks about how incredible our season was, I walk away and shake my head. I just tell them I didn’t get us there, these guys did.”

Hulings said he decided to retire for several reasons. His wife Robin recently retired, his business as a traveling motivational coach has continued to grow and take up more time, he wanted to give younger coaches a chance to take over at WMC, and he wanted to spend more time with his grandchildren.

“My 12-year-old grandson, when he found out I was retiring, he said ‘Grandpa, maybe you’ll be good enough to coach my team,” Hulings said with a chuckle. “Apparently three state championships might not be enough of a pedigree for his team.”