R-P soccer star Jaxon Carpenter shows he has a knack for musical theater, as well

MUSKEGON TOWNSHIP – Jaxon Carpenter already had a reputation as a great soccer player.

Now he’s demonstrated that he can play other pressure-filled roles, far beyond the playing fields. 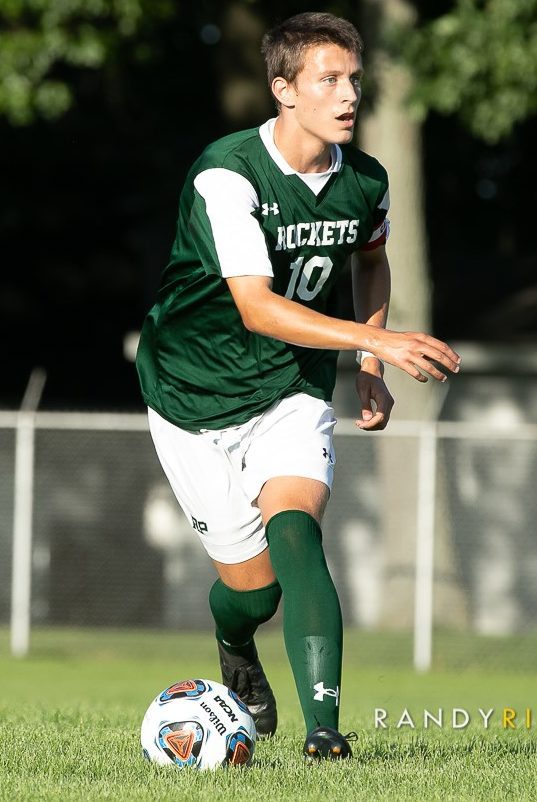 Carpenter, an All-Stater for the Reeths-Puffer soccer team, recently played the lead role in the school production of the musical Newsies, despite having little background in theatre.

Newsies was a 1992 Disney movie that was adapted into a hit Broadway production. It’s loosely based on the real-life 1899 newsboy strike in New York City.

Carpenter loved the movie as a youngster, particularly the lead character Jack Kelly, so when he heard that the school was putting on the show, he decided to try out for the part.

“Growing up we were Disney fanatics, and I was a Newsies fanatic,” said Carpenter, who was a junior this year. “I loved that movie as a kid, and I wanted to be just like Jack Kelly. He was just the coolest guy.

“He could sing and dance, he had sweet hair, and he got the girl. He’s what every little boy dreams of becoming, that super cool guy. So when I heard a rumor that they might be doing the show, I figured this was my chance.”

Also in the cast were Carpenter’s twin brothers, sophomores Ashton and Preston, who are also members of the R-P varsity soccer squad. The youngest actor was their little brother, 11-year-old London, who is a junior soccer player.

Even Keith Knapp, a Reeths-Puffer teacher who recently retired as the varsity soccer coach, was involved. He had a small role, playing New York Gov. Teddy Roosevelt. 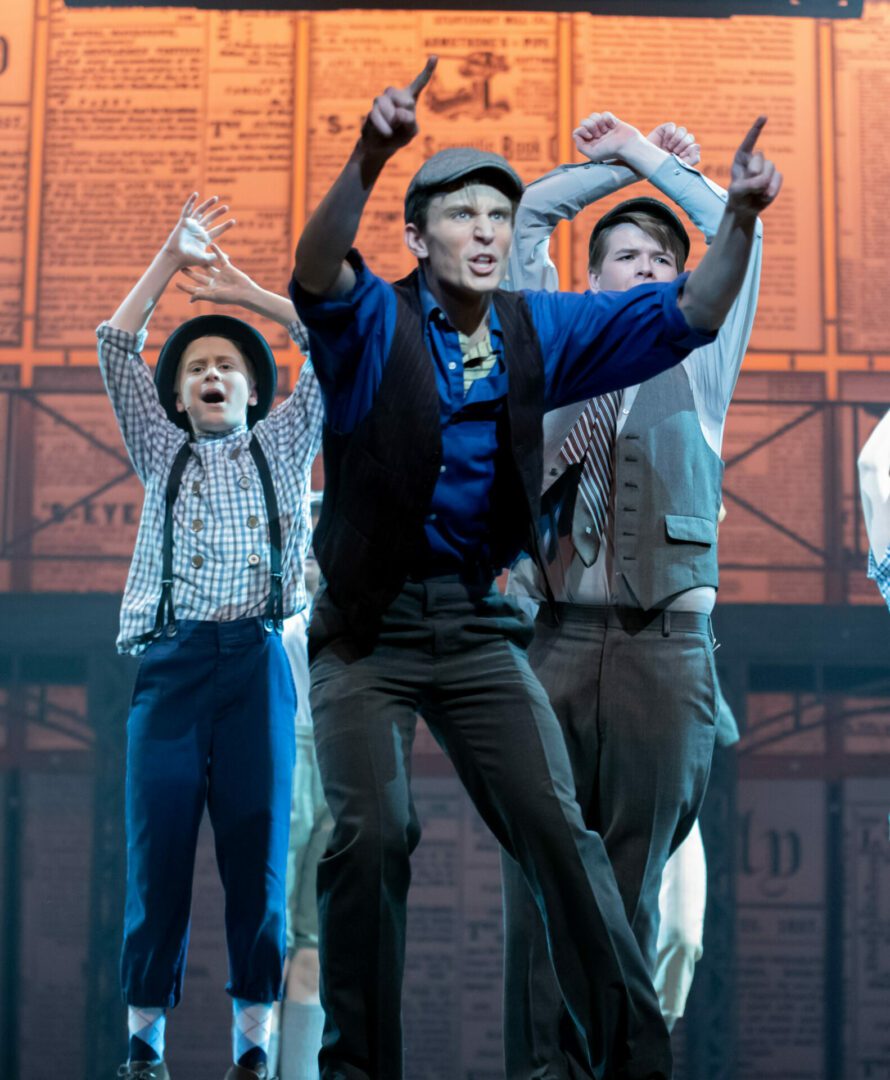 The biggest and toughest role went to Jaxon, and he embraced it. As Coach Knapp put it, he’s never been a kid who’s afraid to tackle new challenges.

But it was a very big jump from choir and the classroom to having the lead role in the school musical, which involved singing solo on stage.

“I think everybody is at first,” Carpenter said, when asked if he was frightened to sing solo in front of an audience. “But once you do it, and the more you do it, the better you get.

“My mom made us be involved in music since we were little, and I was in band in fifth grade through eighth grade. Then she made us join choir. I didn’t want to do it at the time, but I did it and embraced it, and it’s one of my favorite things now.”

Luckily for Carpenter and the other cast members, the production was scheduled to hit the stage just before the COVID-19 crisis cancelled everything on the calendar.

There was supposed to be one show on Thursday, March 12, one the next night, and two on Saturday March 14. Both Saturday performances were cancelled, but the show went on the first two nights, in front of limited audiences.

While the audiences were much smaller than usual, everyone seemed to love the show, Carpenter said. 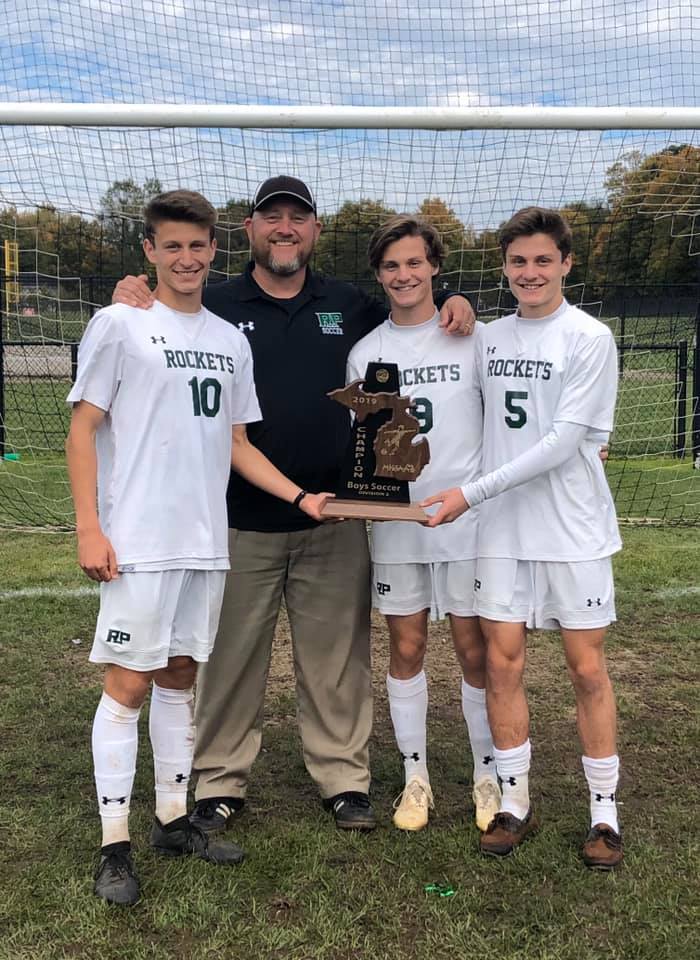 “It was incredible,” Carpenter said. “The shows were amazing. Even more amazing was the process of spending hours every day with the directors and my classmates, building relationships doing something we all loved to do. It was by far one of the best experiences of my life.”

Carpenter was already accustomed to playing a lead role on the soccer field. That was particularly true last fall, when he led the Rockets in scoring and helped them win a Division 2 district championship.

Carpenter’s soccer talent was obvious from the beginning of high school, and he was moved up to varsity immediately as a freshman.

His scoring numbers were relatively modest in his first two seasons. He had 3 goals and 13 assists as a freshman, and 8 goals and 7 assists as a sophomore.

“It was sweet,” Carpenter said about becoming an All-Stater. “I had wanted that since I knew it was a thing. It just all came together, and I got to score a lot and get a few assists. 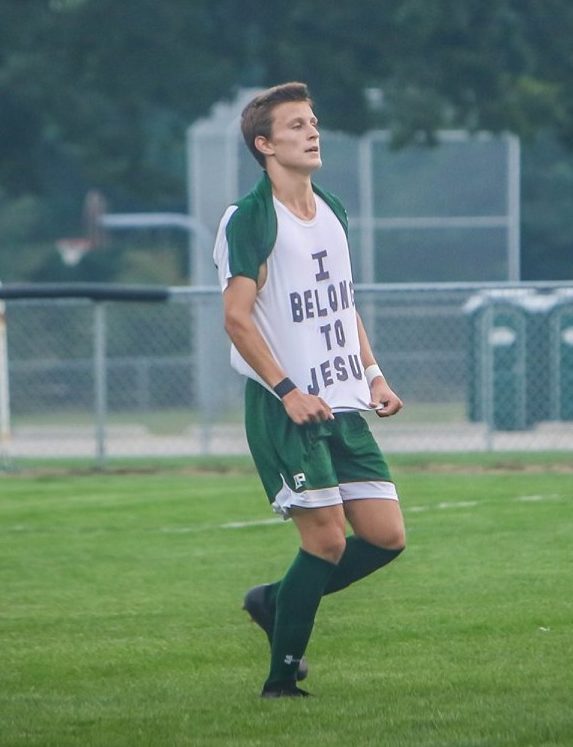 “My sophomore year was a little rough. We had a young team with only three seniors, and we were going up against teams with lots of juniors and seniors. This year we had basically the same team, but we were all a year older and better. I got bigger and faster, and I had teammates who just loved to set me up to score.”

Carpenter has already found his way into the Reeths-Puffer soccer record book. He had the fifth highest goal-scoring season in R-P history last fall. He is tied for second in assists in a season (13 as a sophomore), and is currently fifth in career goals with 34.

He has already set a school career assist record with 32, and he still has his senior season to go.

“Even when he was in eighth grade, and we had drop-in workouts during the winter, he was standing out against guys who were four years older than him,” said Knapp, who is stepping aside after 24 years of coaching. “He was so technically skilled and such a driven competitor, we knew he would have a fantastic career.”

Carpenter said he’s always dreamed of being a pro soccer player, and he has talked to a few college coaches about extending his career beyond high school.

But now, after getting a taste of acting, he’s rethinking his plans.

“I’m not sure what I want to do,” he said. “Now I’m looking at maybe pursuing a career in musical theater. I loved it that much.”