RAVENNA – After a 2019 season full of injuries and only three wins, the Whitehall football team was more than happy to showcase their

One of those finally healthy players was senior quarterback Andrew Durbin, who broke his foot in Week 3 last season and missed the rest of the campaign. 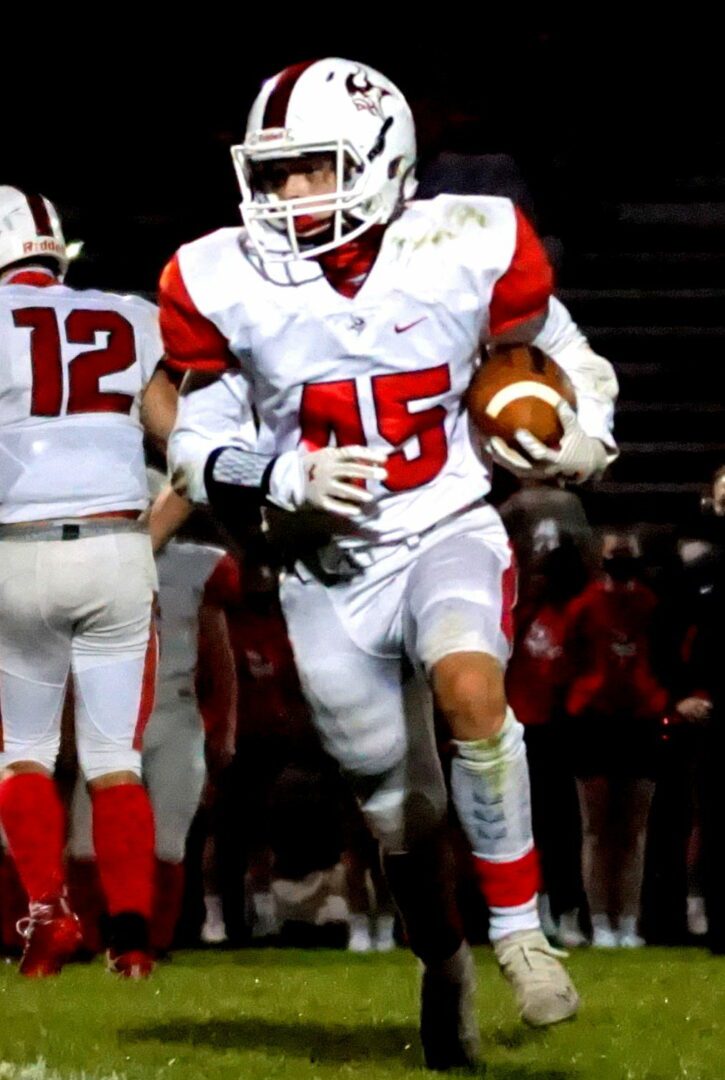 Whitehall’s Jaiden Altgilbers rushes the from the backfield. Photo/Leo Valdez

“It felt amazing,” said Durbin about returning to the field, where he totaled 126 passing yards and two touchdowns along with 33 rushing yards on Friday. “I missed every single second of it over the last year. I’ve been working so hard and I’m so proud of everyone on our team. My teammates really helped me.”

Durbin wasn’t the only one happy to see a healthy Whitehall football team.

“It’s really amazing,” said Whitehall coach Tony Sigmon. “We didn’t know if we’d get a chance to even play with COVID-19 going on. With everything that has gone on with injuries, the lightning delay at Parma Western last year, and COVID-19, I have to give a shout out to our parents. But our kids have done everything that was asked of them at an exemplary level.”

It took some time for the teams to get going, and the first quarter ended 0-0.

Whitehall started the scoring in the second quarter when a 93-yard, 14-play drive ended on a 10-yard touchdown pass from Durbin to Mario Moore.

Whitehall extended the lead to 14-0 with 2:07 left in the second quarter when Durbin found Nate Bolley on a 52-yard pass.

In the third quarter, the Vikings scored on their first possession when junior Alec Pruett punched in a six-yard touchdown run making the score 21-0.

Just three plays later, senior Kris Dowdell intercepted a pass and returned it 30 yards for a touchdown, extending the Whitehall lead to 28-0.

A three-yard touchdown run by Pruett with 28.9 seconds left in the third quarter made the score 35-0.

In the fourth quarter, Pruett scored on a two-yard run and Bolley broke loose for a 40-yard touchdown, ultimately giving Whitehall a 48-0 win to start the season.

Pruett led the Vikings with 89 yards and three touchdowns on 14 carries while Bolley finished with 62 yards on five carries and 57 yards receiving on two catches.

“It feels really good,” said Pruett about his performance in his very first varsity game. “Just coming from junior varsity, I didn’t know what to expect. My offensive line deserves all the credit, they changed the game.”

The Viking defense only surrendered two first downs and 36 total yards, including 32 yards rushing. Graycen Shepherd and Max Brown led the way with 3 ½ tackles apiece. Red Watson and Jaiden Altgilbers each had an interception for Whitehall.

“The defensive effort was phenomenal,” Sigmon said. “They did an awesome job and every kid played hard.”

Whitehall will host Shelby next Friday while Ravenna will travel to Mason County Central.

Whitehall’s Jaiden Altgilbers rushes the from the backfield. Photo/Leo Valdez 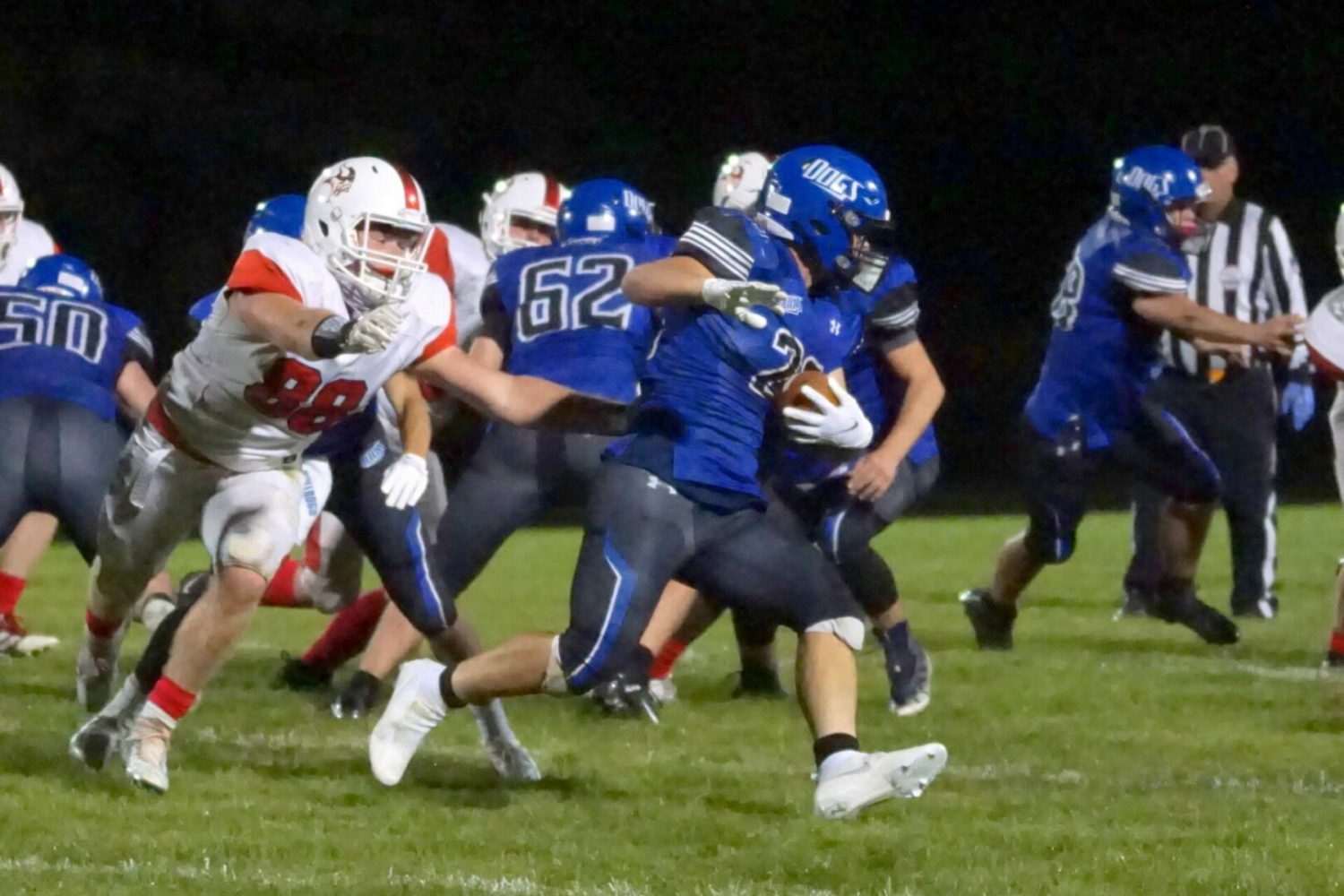 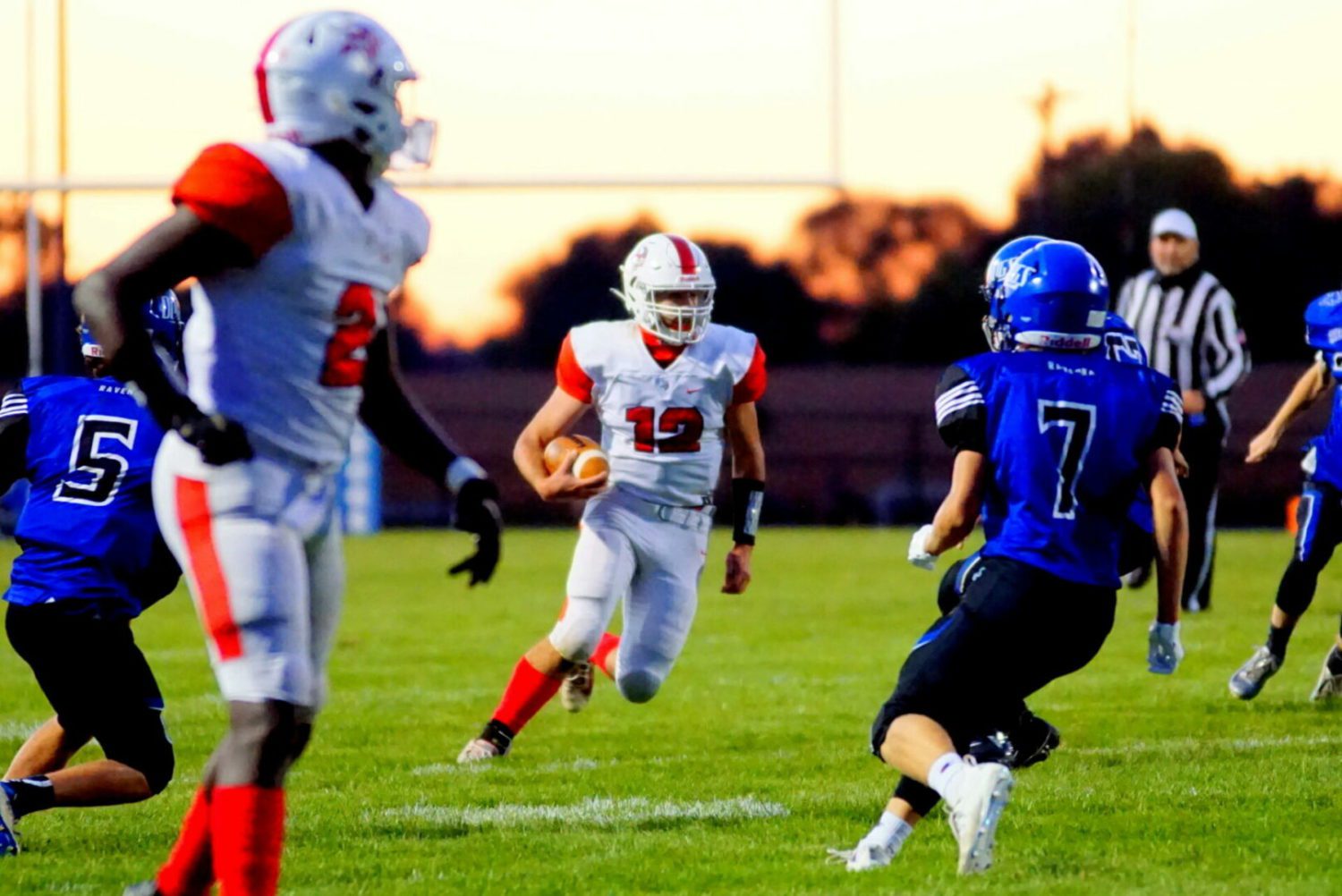 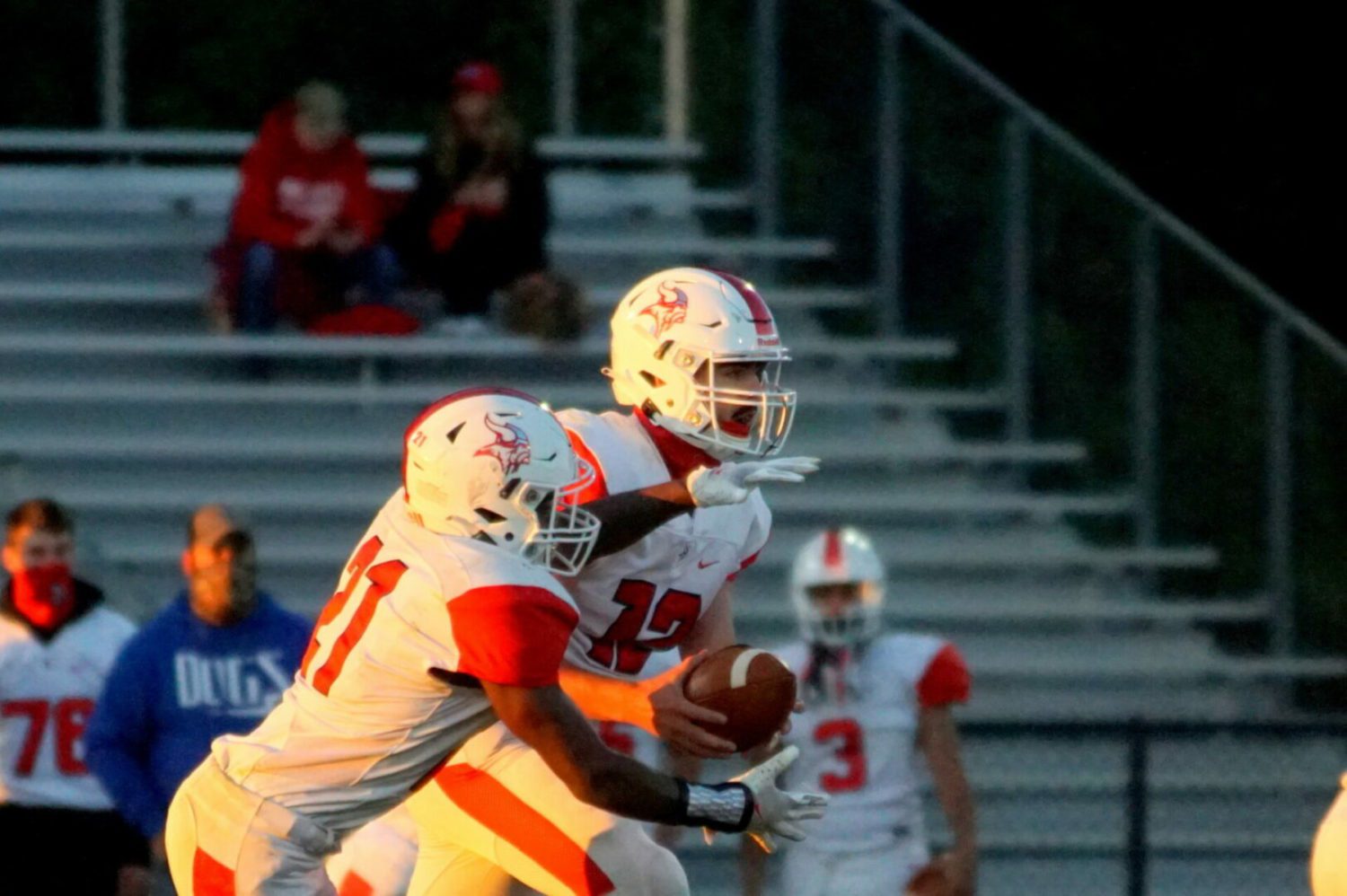 Whitehall’s Marco Moore gets ready to take a handoff from No. 12 Andrew Durbin. Photo/Leo Valdez 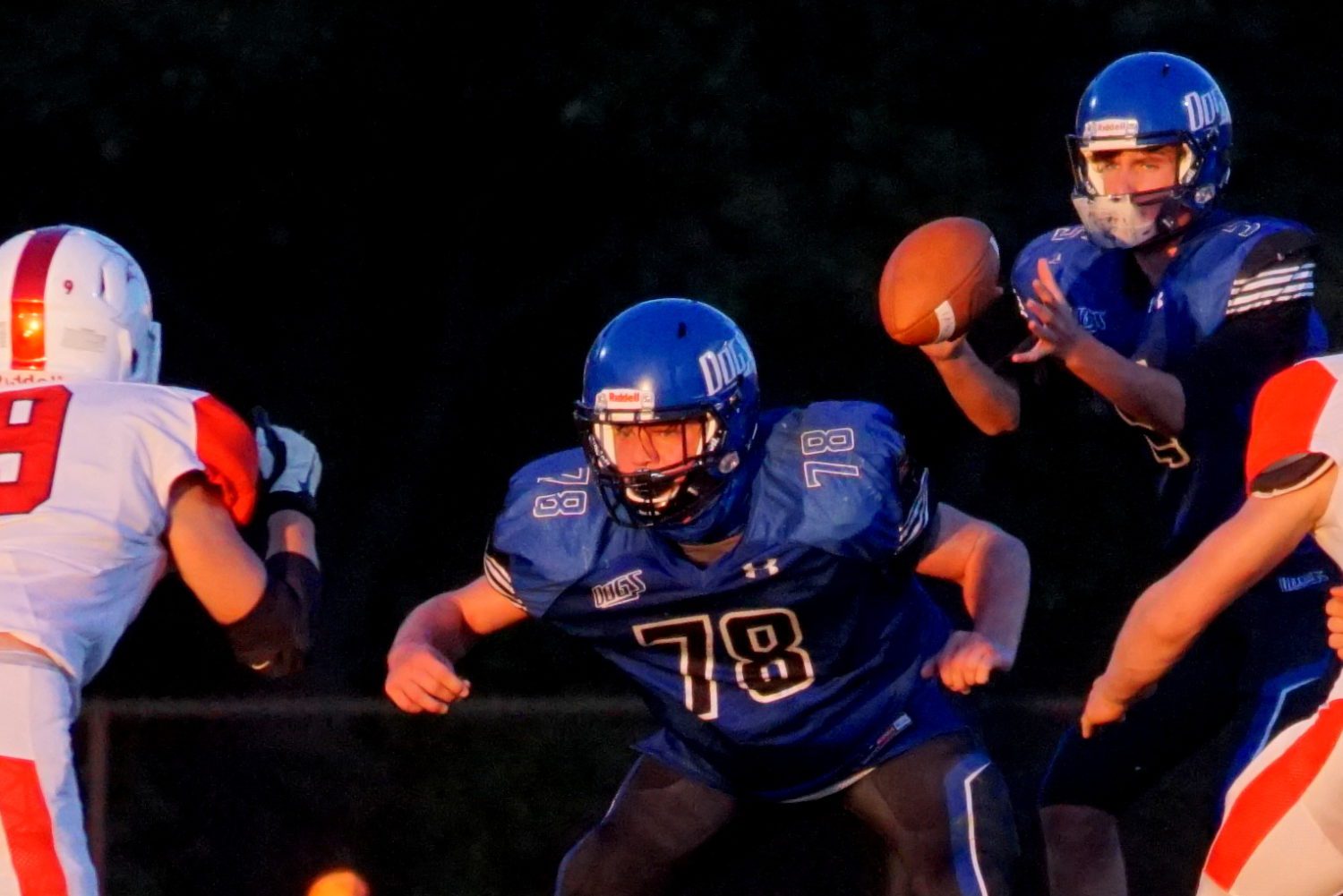 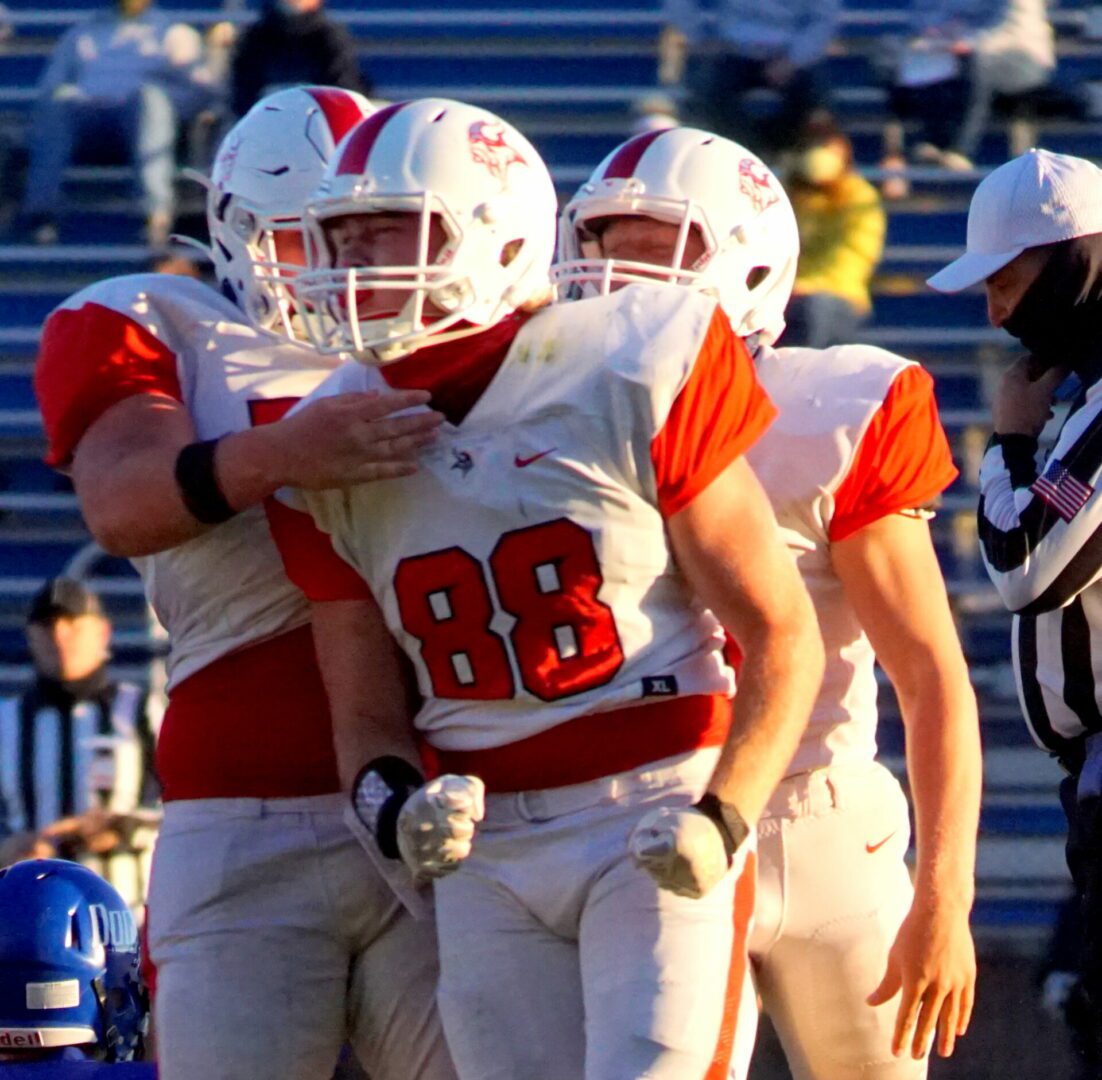