medal before he graduates from high school.

After all, he’s only a 14-eyar-old freshman, and he’s already demonstrated that he’s the best of the best in the county. 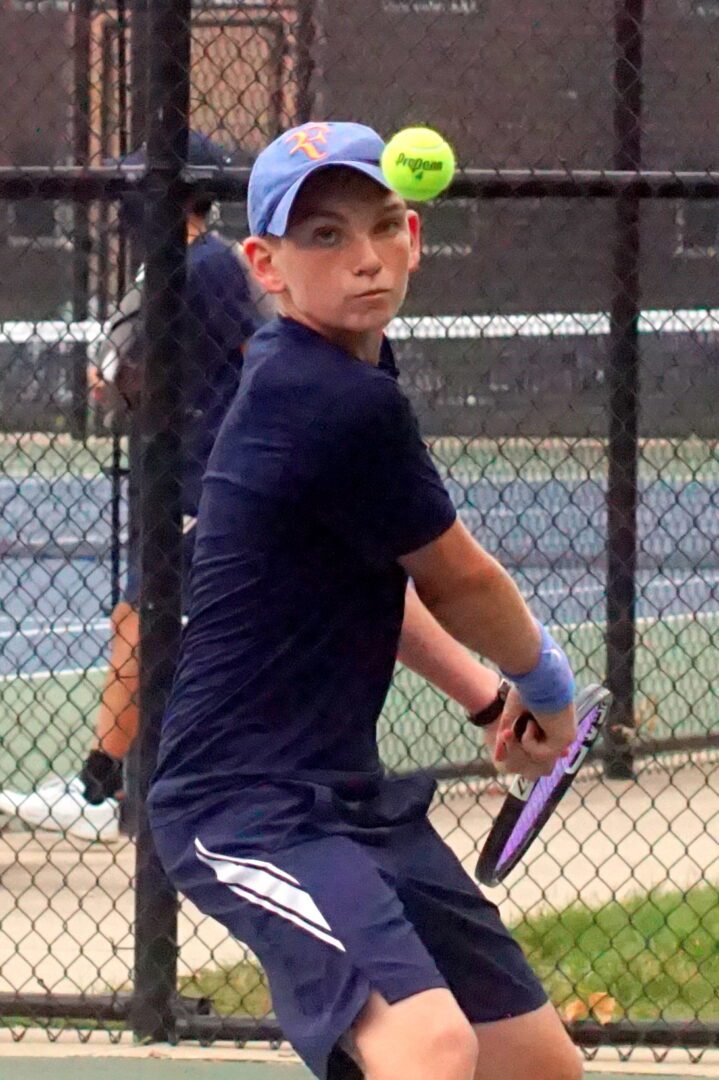 Mona Shores freshman Drew Hackney gets ready for a backhand during his No. 1 singles match in the finals. Photo/Leo Valdez

The GMAA tournament was different this year, due to COVID social distancing concerns. There were actually two tournaments – Tier 1 and Tier 2. The Tier 1 tournament was for the three best teams in Muskegon County, which include many of the best players.

To nobody’s surprise, Hackney emerged as champion of the No. 1 singles flight, which included the top three high school singles players in the county. He posted a 2-0 record on the day, defeating Brennan McManus of North Muskegon and Ashton Trnka of Whitehall with ease.

It was the first real tournament of Hackney’s brand new high school career, and he was excited about testing himself against the two other best singles players from this neck of the woods and coming out on top.

“It was a good win today, a big confidence-builder for our team,” Hackney said. “For me, I just think with a combination of hard work and effort over the years, it’s cool to see it pay off. I just try to go out there and focus on myself and my game, and that’s usually when the best results come.”

His coach and mother, Traci Hackney, said her son already has an amazing amount of experience and skill because he loves the sport.

“He’s played a lot of tennis,” Coach Hackney said. “My husband and I both played tennis, and we both coached, but we never really thought too much about having kids who play. But when he was five or six, we just kind of threw him some balls, and he loved it. He loves tennis. That’s apparent when he plays. He’s a student of the game. He lives and breathes tennis.

“As long as he keeps enjoying it, I think he will continue to do good things.”

Mona Shores was pretty dominant across the board,, winning five of the eight flight championships. Others going 2-0 and winning medals for the Sailors were Kayden Hellmann (No. 2 singles), Gavin Kuhn (No. 4 singles), Victor Powell and Collin Khatir (No. 2 doubles), and Harrison Nelund and Luke Uptigrove (No. 4 doubles).

The other flight champions were North Muskegon’s Troy McManus (No. 3 singles), Whitehall’s Christian Smolen and Ryan Findorff (No. 1 doubles), and North Muskegon’s Shamus Corbett and Gavin Grimm (No. 3 doubles).

It was a good day for Coach Hackney, who is in her first year of leading the Sailors after a long layoff as a tennis coach. While her team is from a much bigger school than North Muskegon or Whitehall, and usually plays against other big schools, she said it’s still fun to win neighborhood bragging rights.

“This is my first year of coaching after taking 14 years off, and my last experience (at the city tournament) was when nine schools had teams and it was a big, crazy event, but it’s still awesome to come play great competition,” she said.

“It’s always been kind of cool to have this. I was explaining that to Drew. He said like, ‘Grand Rapids doesn’t have a city tournament?’ He thought every city had one. It’s a really cool tradition. If we didn’t have it, we would never get a chance to play these teams, because we usually play against bigger schools and go do different regionals.”