Last year, Brendan Hyatt and Owen Swanson were bathing in success. They were both standouts on Orchard View’s suddenly successful varsity football team, which went from winning only two games in 2018 to posting a perfect 9-0 regular season and winning the Lakes 8 conference championship in 2019. 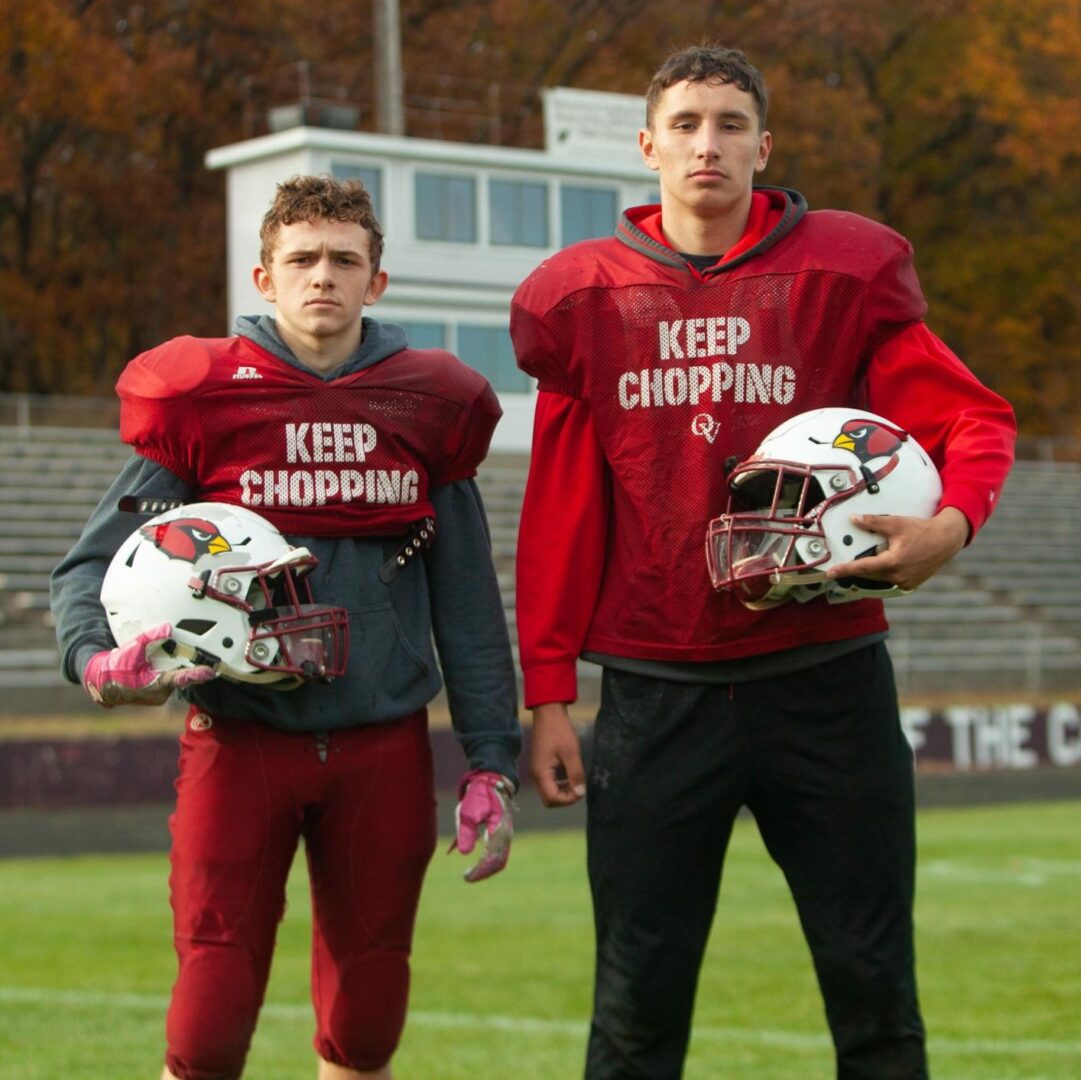 But this fall things changed again, because many of Hyatt and Swanson’s teammates were seniors last year and graduated in the spring.

That left the Cardinals with a very young lineup, and they lost their first four games on the field this season, including three by ugly margins. OV picked up a win by forfeit when Wyoming Lee pulled out of the Week 4 game due to COVID concerns, but a forfeit never feels like a real win.

Despite the losses,  Hyatt, Swanson and the other seniors never gave up on the team. They kept pushing hard, setting a good example and encouraging younger teammates to improve. They both admitted there were moments when it was hard to remain positive, but they stayed the course.

“The underclassmen got down sometimes, and that could have brought everyone down, but we just kept a positive attitude,” said Swanson, OV’s veteran starting quarterback. “There were a couple moments when I felt down, but there were other seniors who brought me back up. Like in everything, you just don’t quit.”

The perseverance finally paid off with a victory last Friday, in the final week of the regular season. That didn’t seem likely at first, because the Cardinals were facing a 5-0 Kent City team that seemed primed to head to the playoffs with an undefeated record.

But something clicked for the Cardinals, who rallied from a third-quarter deficit and stunned the Eagles 26-20. Junior Darius Williams was the star of the game, scoring three touchdowns, including two on runs of 65 and 63 yards. 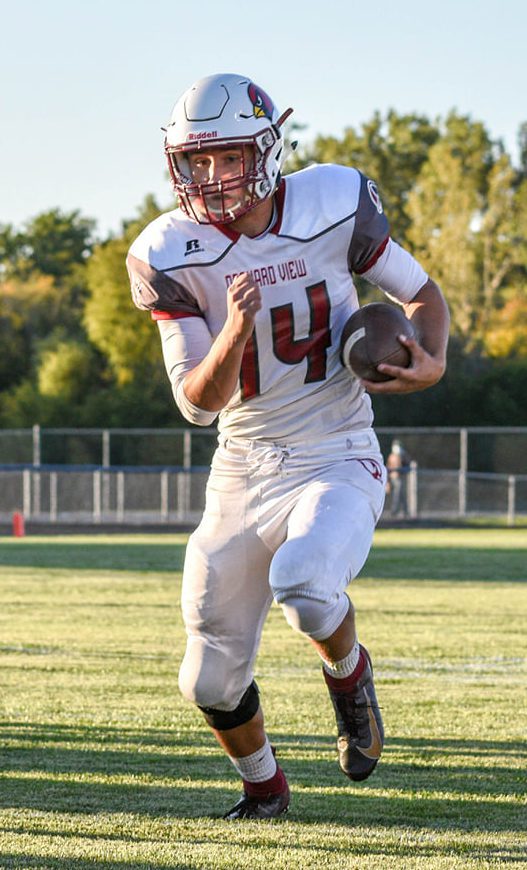 Swanson rushes the ball out of the backfield for OV. Photo/Mitchel Dixon|MSD Photography

The win was a huge relief for Hyatt and Swanson, who have now experienced both the best and worst of times.

“I was pretty excited,” said Hyatt, a running back who led the Cardinals in rushing in 2019 with more than 1,000 yards. “We thought it would be our last home game ever, and we played like it. The freshmen and the other younger guys left it all on the field for us seniors.

“I have never seen our young guys play like that before. We looked like an actual varsity football team.”

Swanson said the team just showed up with a loose, carefree attitude and got it done.

“We just went out there, we didn’t have anything to lose, and just put on a show,” he said. “It was extremely exciting. To get a win on Senior Night was a thrill for me.”

The road leading up to the big win was a tough one for Orchard View. They Cardinals were not only breaking in a lot of underclassmen, but were also stung with injuries in the early part of the season. One key injury was to Williams, an explosive offensive threat, who played only parts of the first two games, then missed the next two altogether.

The results were not surprising.

The Cardinals lost their season-opener to Hopkins 43-0, then fell to Manistee 34-20 and Ludington 63-8. The forfeit victory over Wyoming Lee came in Week 4, but that was followed by a 41-0 loss to Muskegon Catholic.

Both Hyatt and Swanson said they saw the potential for difficulties early on, and figured there were going to be some tough games – although neither of them expected so many of them.

“Last year we had eight seniors who played both ways,” Hyatt said. “I knew it was going to be more of a building year. I thought we would be a little bit better, but we start eight or nine freshmen between offense and defense.”

OV head coach Fred Rademacher said he knew the tools were always there for the 2020 team to win – it was just a matter of having the young players gain experience and put it all together for a full game. 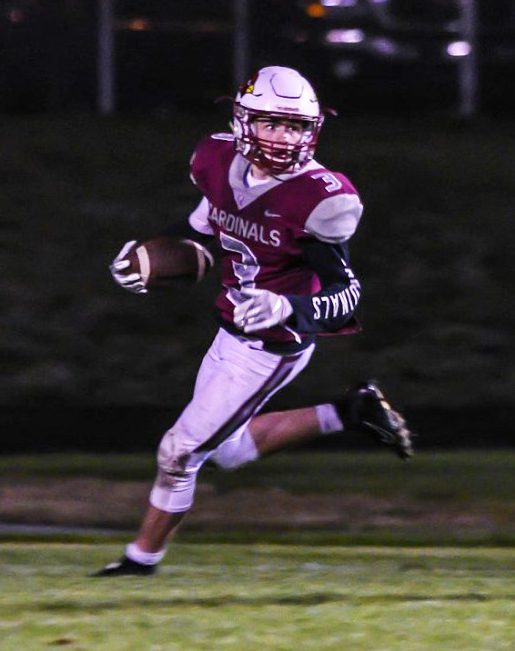 Hyatt rushes in for a TD during action last season. Photo/Mitchel Dixon|MSD Photography

“We’ve always had the talent and potential, but we’re so young that it was hard to play a complete game,” he said. “Then they came out against an undefeated team, eliminated a lot of the mistakes and made plays when they needed to. When you do that, you have a good chance of winning.”

Rademacher said consistent leadership from Hyatt, Swanson and other upperclassmen helped keep the team together through the tough weeks.

“They could have quit, but they kept showing up and practicing hard and being great leaders,” the coach said. “It was a tough situation they had to go through, but they became better men because of it.”

Now, with a win under their belts, the Cardinals are entering the playoffs with a new lease on life. They will host Grant, another 2-3 team, at 7 p.m. on Friday in the first round of the Division 5 districts.

Winning last Friday allowed the Cardinals to get a higher seed than Grant in the district and be a home team in the first round.

“The way we’re looking at it, we are 1-0,” Hyatt said. “It’s like those other games don’t even matter. We are starting to play like we were supposed to.

“I don’t think we look like the same team at all. We’ve been at full strength the last couple of weeks, and we have a lot more confidence.”

Whatever happens the rest of the way, Swanson said he’s just determined to enjoy the experience as long as he can.

“I’m having the time of my life playing high school football – we’ve just got to leave it all out there,” he said. 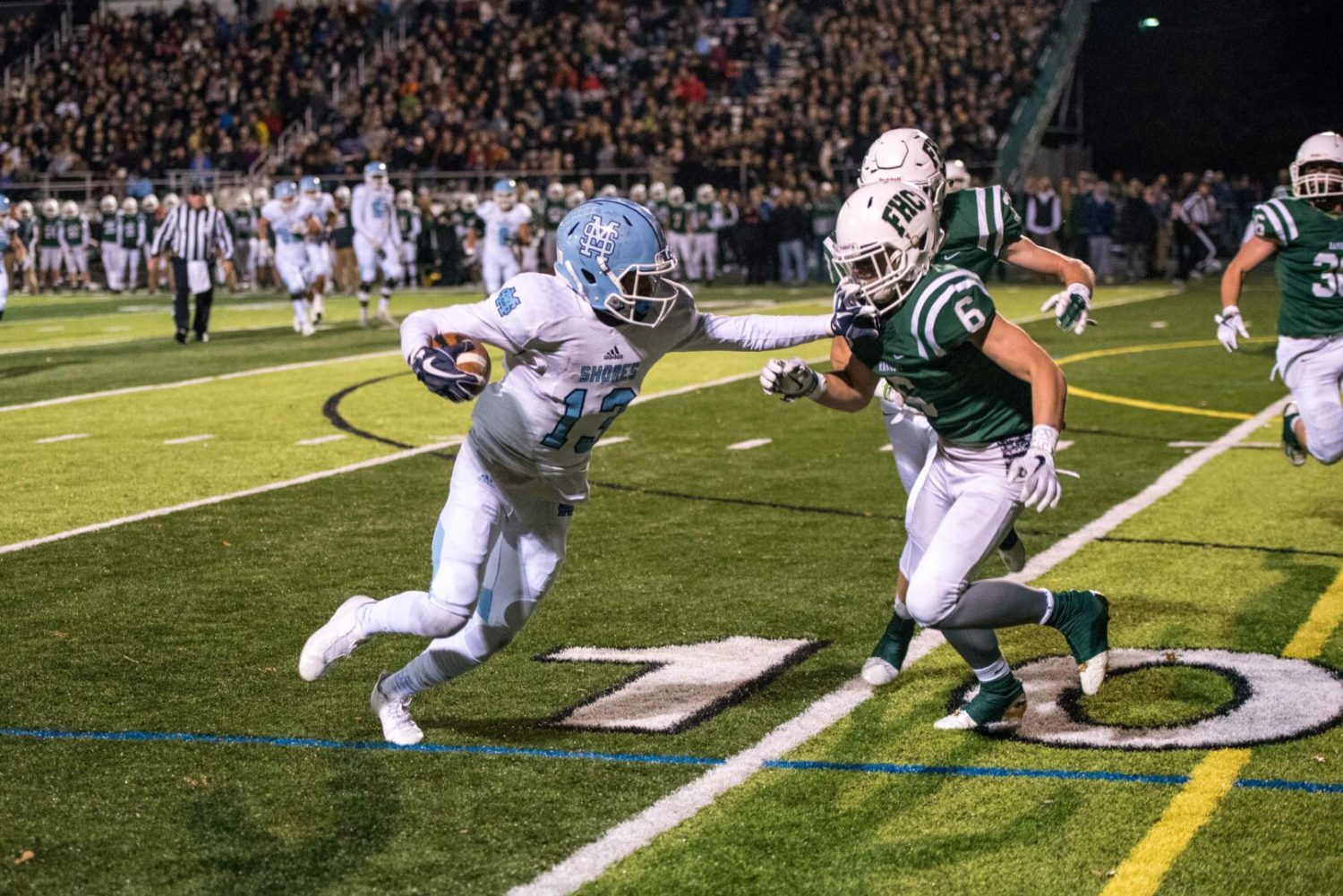