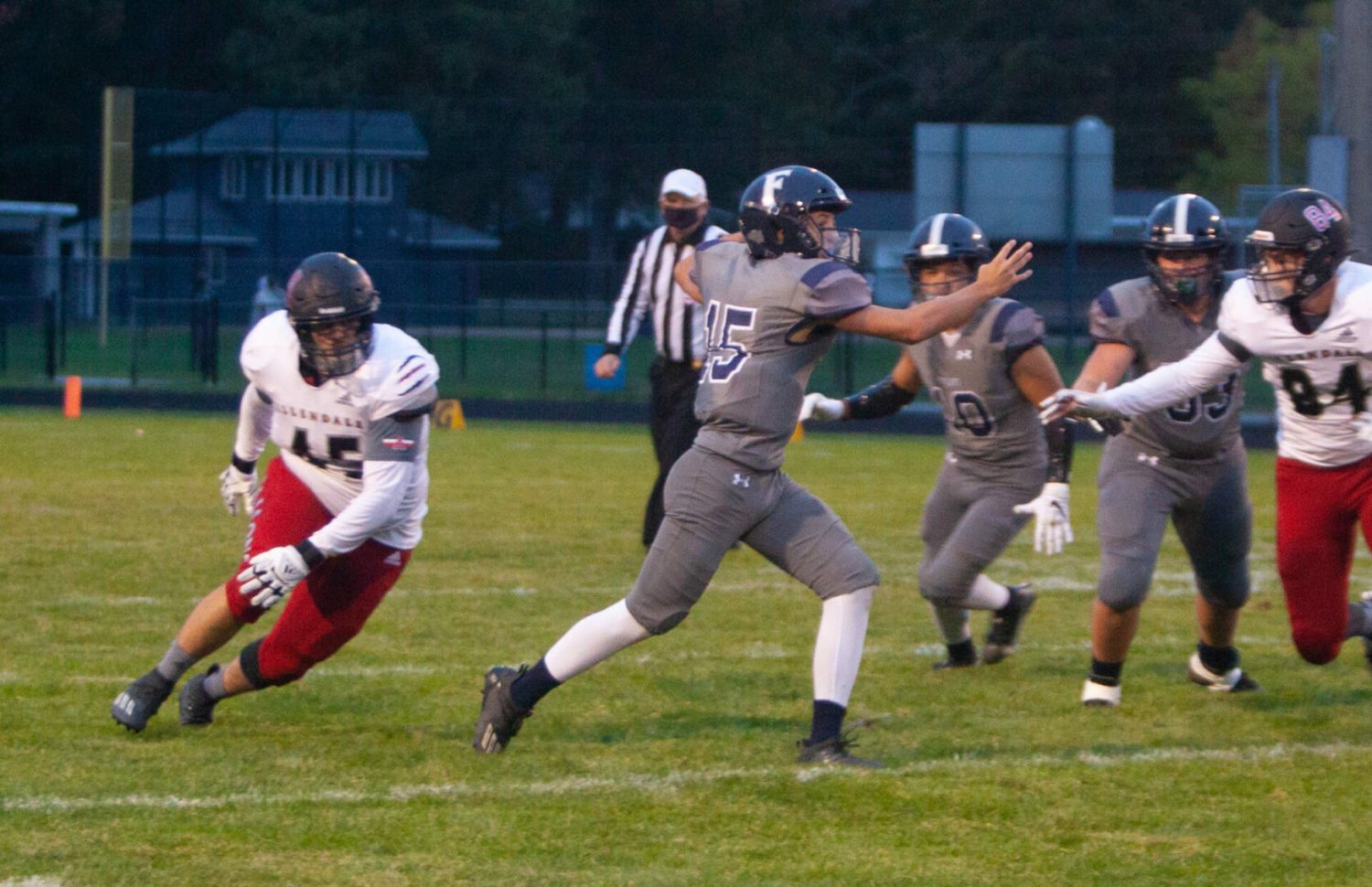 FRUITPORT — An up-and-down start to the season continued for the Fruitport football team Friday night, when the Trojans dropped an O-K Blue conference matchup against Allendale, 45-28.

Fruitport fell behind on the first play from scrimmage, fought back and got within six points in the third quarter, but faded down the stretch in their first-ever meeting with the Falcons. 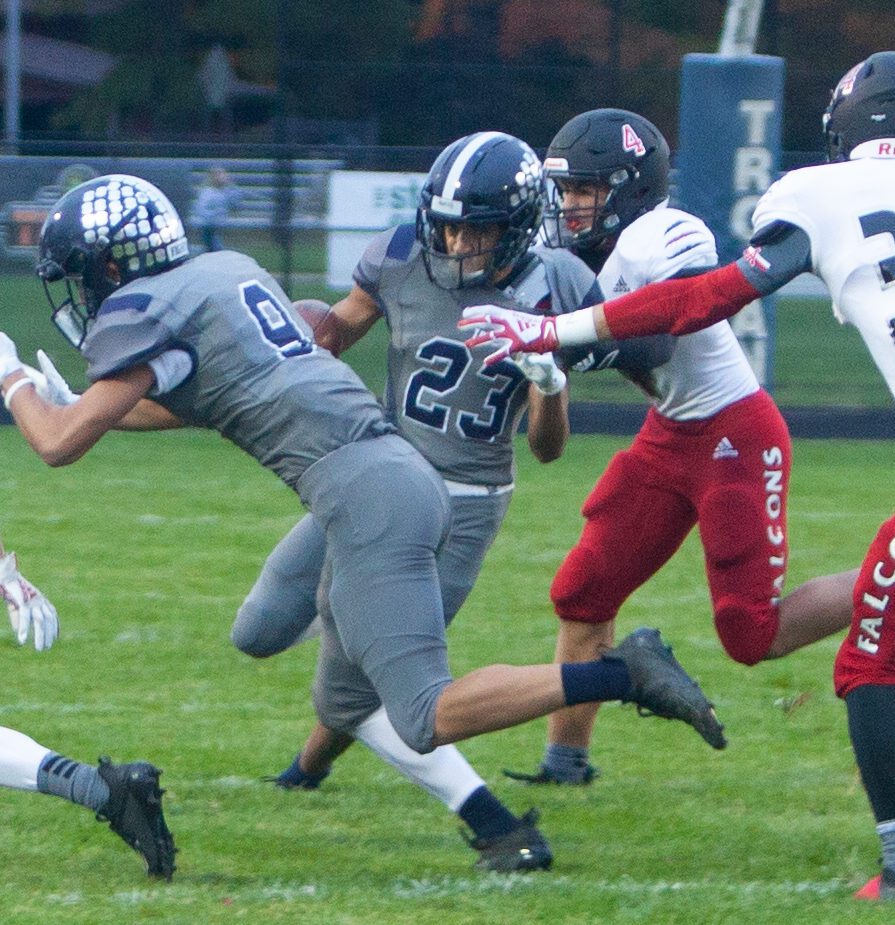 Fruitport coach Nate Smith said he was happy with how his team attacked the game, but said too many mental mistakes cost the Trojans.

“I’m really proud of the effort we put forth,” Smith said. “But we made mistakes on our side that we just couldn’t overcome. Tonight we shot ourselves in the foot too many times against a team that’s going to take advantage of those mistakes.

“We had a couple of blown assignments on deep balls, on blocking up front. Guys that are sure-handed receivers had some drops that were uncharacteristic.”

Despite the sub .500 start, Smith said he’s satisfied with his team’s progress at the halfway point of this shortened regular season.

“I like where we’re at,” the coach said. “We’re not where we want to be, but I like the drive and the mentality of our team. Our focus is where it needs to be. We talk about winning from within. It’s about us focusing on us being better. If we do that on a daily basis, we believe the score will take care of itself.

“I love our guys. The team is a great team to coach. They’ve got great attitudes, they work hard. It’s just a matter of them believing in their ability. Once they do that, I think they’re going to do some great things.” 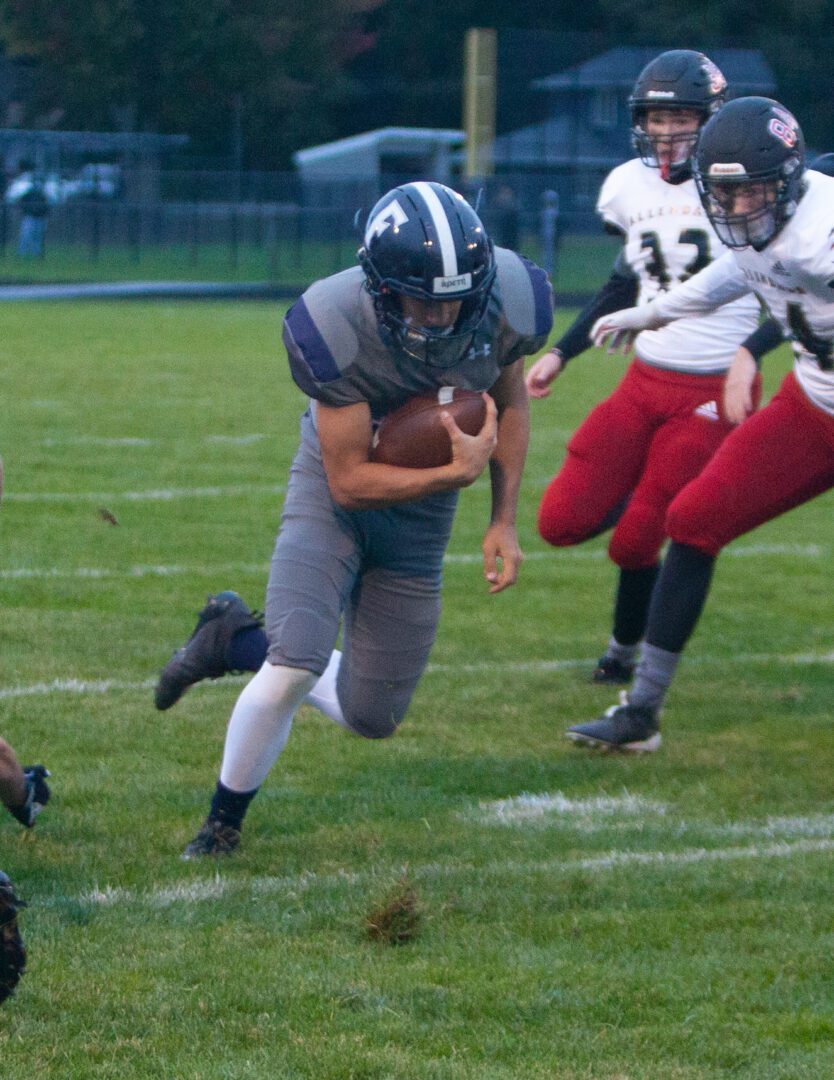 Allendale opened the scoring on the first play from scrimmage when quarterback Lukas Kuiper found Cole DiPiazza with a 79-yard touchdown pass. The successful PAT made it 7-0.

The Trojans got on the scoreboard with 8:25 remaining in the first quarter on a 32-yard run from quarterback Gavin Reames. A failed two-point conversion left the score 7-6.

Kuiper tossed his second long touchdown later in the quarter, a 71-yard connection to Matthew Joziak, to make it 14-6.

Kuiper connected with Josh Gunneson on two touchdown throws in the second quarter, the first from eight yards out and the second a 35-yarder, that made the score 28-6.

Fruitport found the end zone with 3:26 to play in the half on a 69-yard run by Cody Nash. A two-point conversion made the score 28-14 at the break.

The Trojans had the lone score of the third quarter, a 50-yard pass from Reames to Camden Farrell on fourth down. A two-point run made the score 28-22, and Fruitport suddenly had new life.

But Allendale responded by scoring the two touchdowns, both passes from backup quarterback Matthew Vinton to Gunneson. The second TD made the score 42-22.

The Falcons added three points on a 22-yard field goal by Adiel Garcia-Lugo.

Nash returned the ensuing kick for a touchdown to bring the score to 45-28, but the Trojans could not put up any more points.

Reames threw for 123 yards, ran for 44 and accounted for two touchdowns. Nash was the leading rusher with 69 yards.

Kuiper passed for 235 yards and four touchdowns in the first half before leaving with an injury. Vinton tossed for 93 yards and a score. DiPiazza led the rushing attack with 132 yards and Gunneson had six catches for 157 yards and four scores.

Fruitport will take on Hudsonville Unity Christian next week. 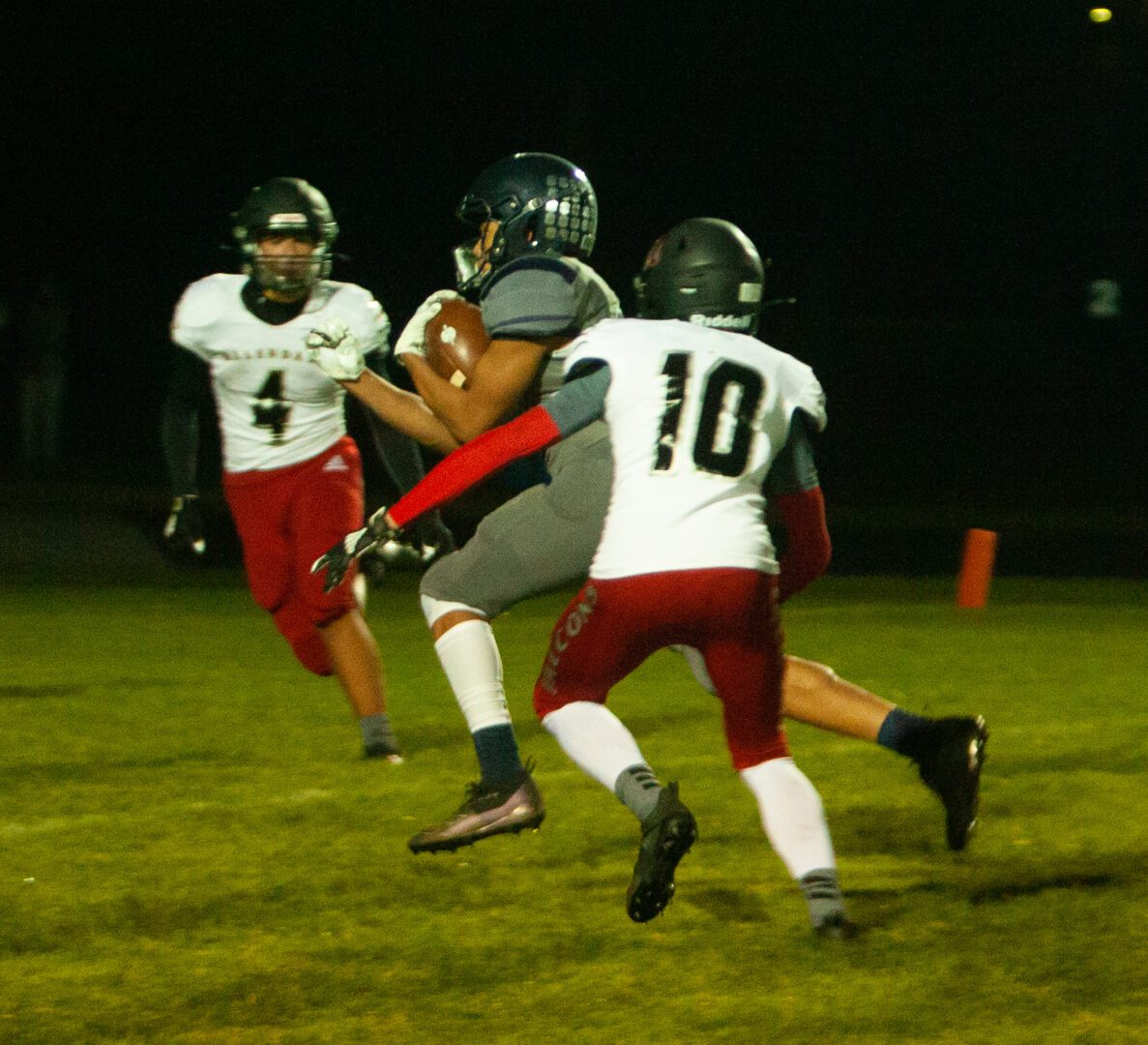 Paschal Jolman rushes through the Allendale defense for a two-point conversion before halftime. Photo/Jason Goorman 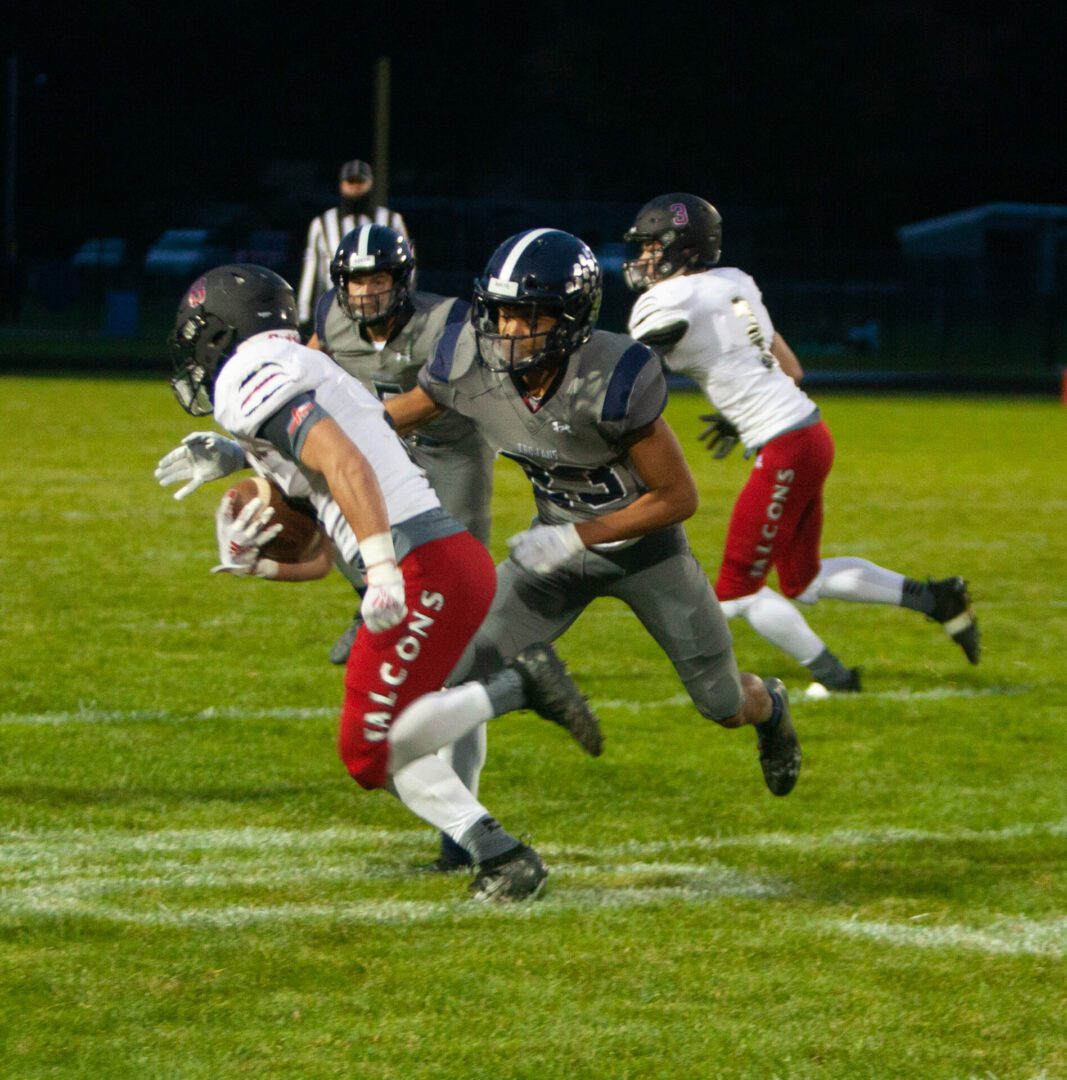 Blake Haight closes in on a tackle for Fruitport. Photo/Jason Goorman 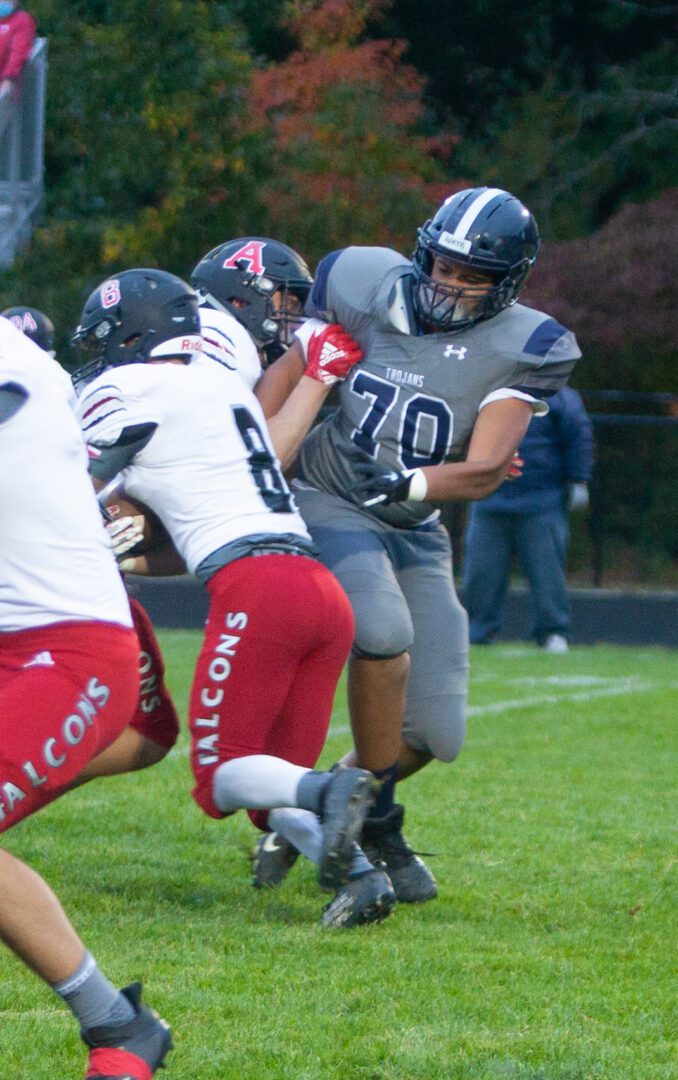 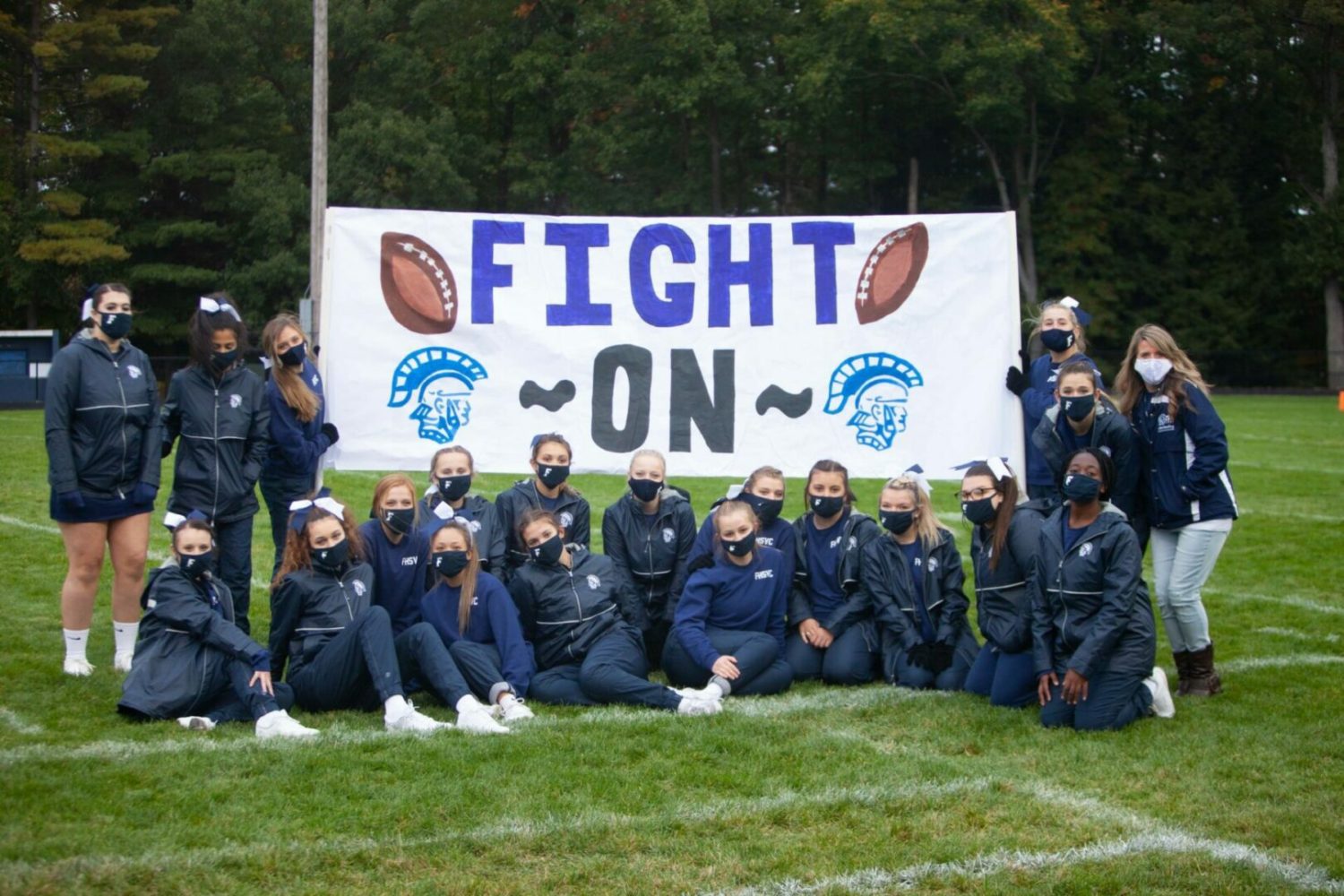 The 2020 Fruitport cheerlead squad gets together for a team photo before the game. Photo/Jason Goorman 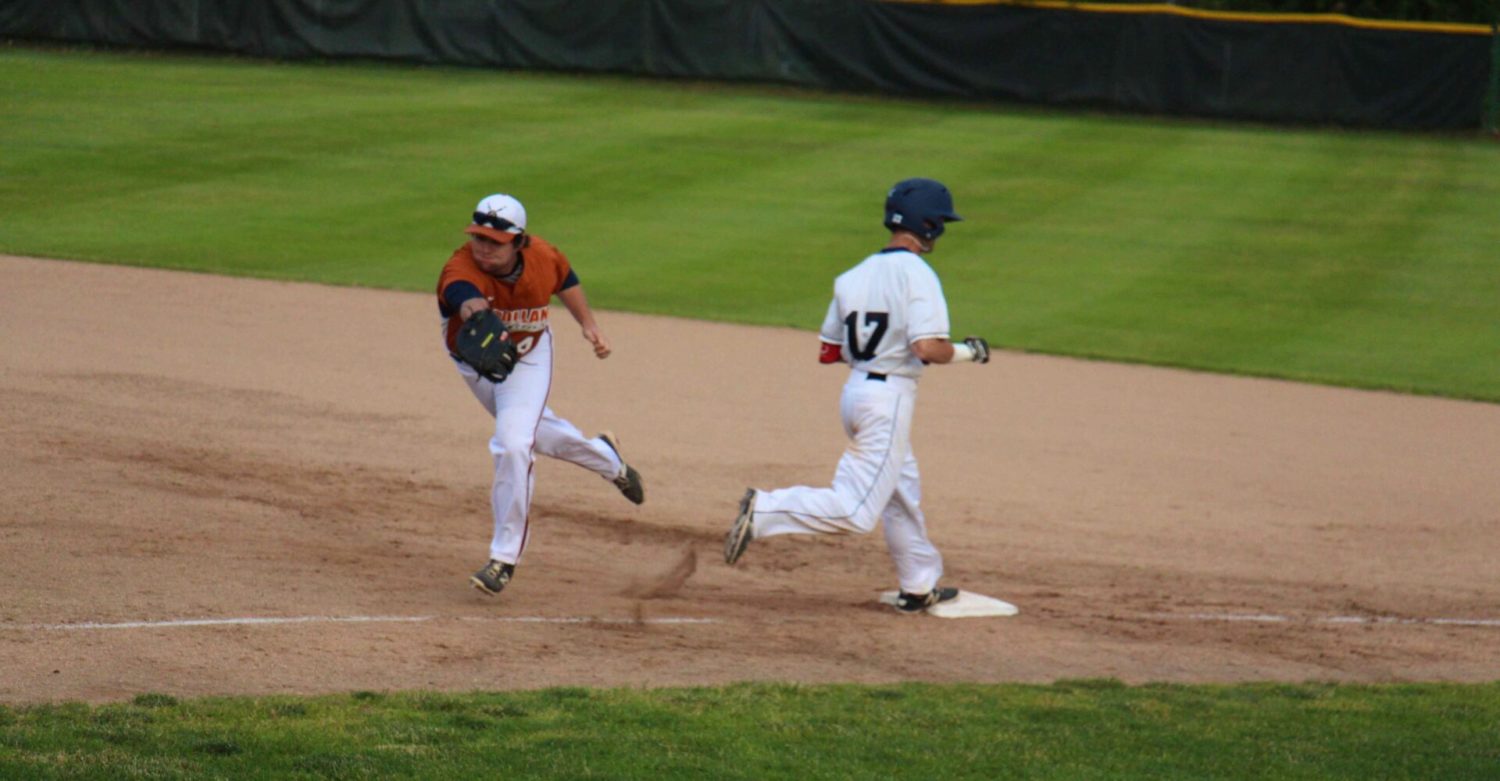