MUSKEGON – There’s a certain pressure that comes with being the starting quarterback at Muskegon High School.

That’s because the Big Reds are state title contenders every year, and Muskegon has the distinction of being the winningest high school football program in state history.

Ideally, head coach Shane Fairfield can mold an underclassmen in a backup role for a year or two, and then let that player adjust to the challenges of being the leader of the Big Reds’ offense during a full off-season of camps, training sessions and 7-on-7 scrimmages. 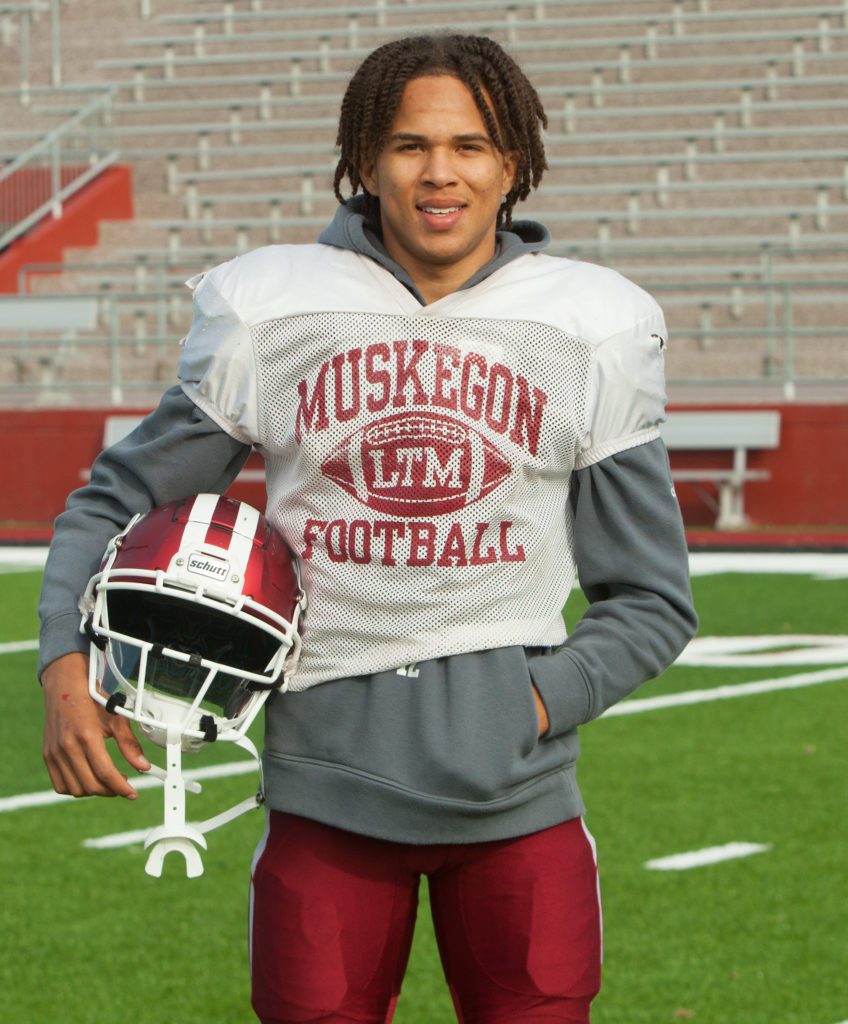 Due to the COVID-19 pandemic, however, senior Amari Crowley did not have the luxury of summer workouts before he took over as the starting QB this season.

He also had to prepare in a hurry during preseason camp, because the state cancelled the fall football season on Aug. 14, then suddenly announced on Sept. 4 that the games were back on – starting in two short weeks.

Granted, Crowley was the backup to sensational All-State QB Cameron Martinez last season, and saw time under center in several games in 2019, because Fairfield liked to maximize Martinez’ offensive potential by moving him around to different positions.

But this is his first season of being handed the keys and asked to drive Muskegon’s high-powered veer offense full time, and there was precious little time for him to get ready.

“God bless our kids, they’ve been so resilient,” Coach Fairfield said. “With everything they’ve gone through, going to heck and back. First we’re playing and then we’re not, and all the restrictions we faced during the summer and in the weight room. It’s been a huge challenge. But they’ve kept plugging away and handled themselves better than I could have ever imagined.

“Amari especially, he was robbed of about 4-5 months, with the camps, 7-on-7s and our weight training There’s a continuity that he needed to establish between him and the rest of his teammates. He was kind of thrown into a leadership situation as our quarterback, and had to learn how to be a leader.” 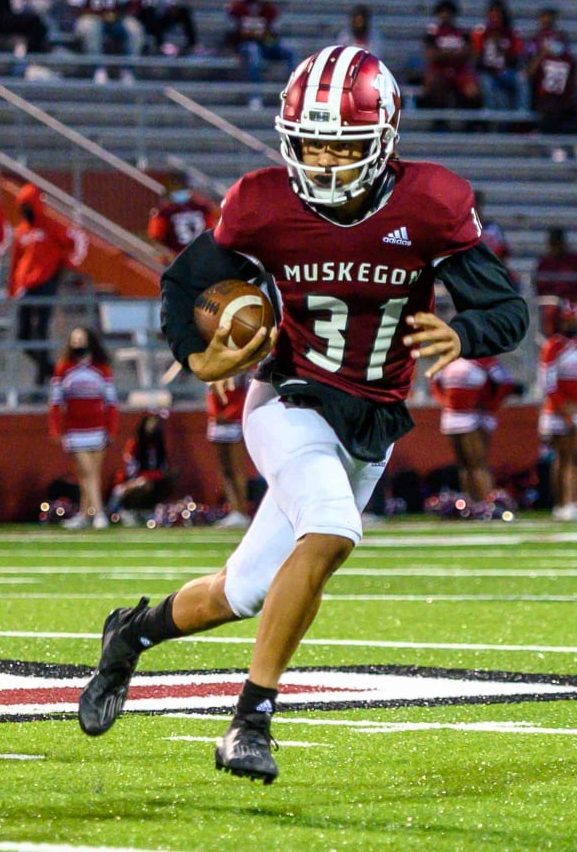 Crowley said there’s been some rough spots this season, including overcoming some early-season turnover issues, as well as some scoring droughts against outstanding opponents from Mona Shores and Zeeland West.

But both he and Fairfield are confident about where the 5-1 Big Reds stand today, entering the Division 3 state playoffs on Friday.

Muskegon will be looking to advance to its fifth straight Division 3 state championship game, and capture its first state title since beating Farmington Hills Harrison in the finals 2017.

Muskegon’s path back to the finals begins Saturday at Hackley Stadium against winless Greenville.

Those are impressive numbers, but there have been a few bumps in the road as he’s settled into his important new role.

After missing the Big Reds’ first game due to an off-the-field issue, Crowley and the Big Reds struggled to care of the ball against rival Mona Shores in their second game, resulting in a somewhat shocking 21-14 loss.

“We’ve learned from it,” Crowley said. “We know we can’t score every time we have the ball, but we just have to hope our defense takes over. We’ve gotten better (since the loss). We’ve had harder practices, cleaned some stuff up. And we know we just have to keep fighting.” 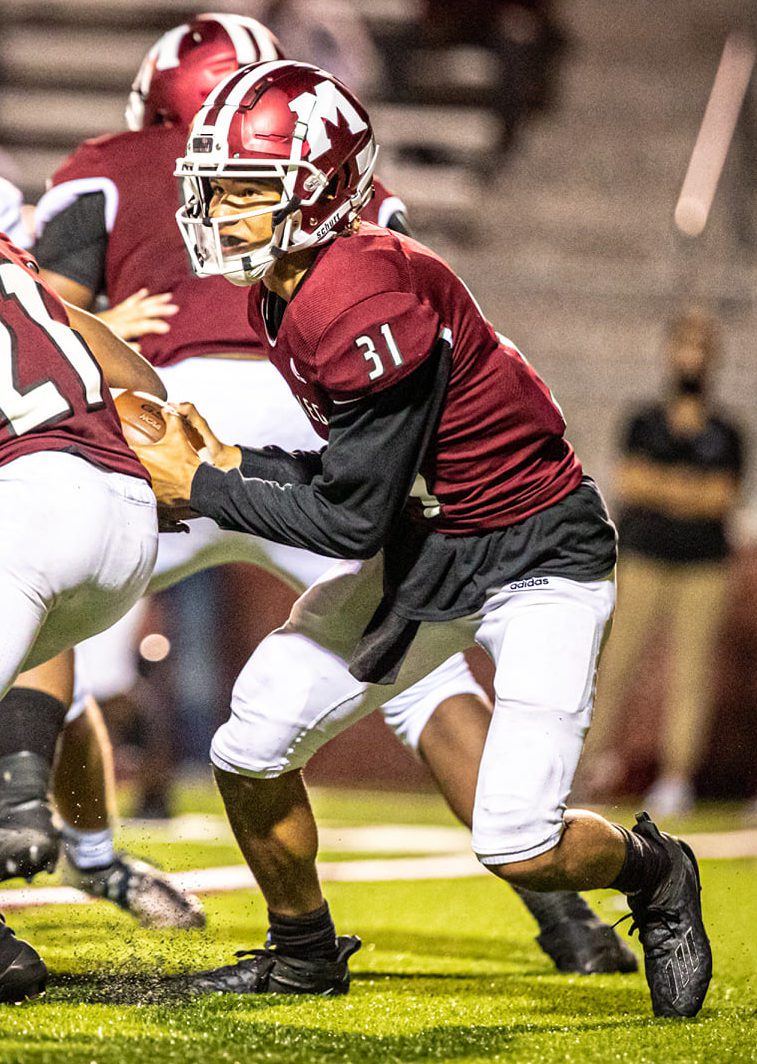 Amari Crowley takes the snap and gets ready to run out of the backfield for Muskegon. Photo/Tim Reilly

Crowley said he started playing quarterback exclusively as a freshman. Prior to that, he hadn’t played the position since his Dynamite or Mini Mite youth league playing days.

“I was a receiver in middle school, but I went out for QB as a freshman. I was kind of bored at receiver,” he said.

Crowley said he learned a lot from backing up Martinez as a junior last season.

“The biggest thing was just watching him work,” he said. “He’d tell me, ‘You practice how you’re going to play.’”

Crowley said he hasn’t felt the pressure to match Martinez’s brilliant back-to-back seasons at Muskegon, but he already has his own collection of electric moments.

His best performance was during an impressive 49-20 victory over a solid Zeeland East team on Oct. 9, when he passed for 194 yards and two touchdowns and ran for 124 yards and two more scores.

His stats may have been even more impressive this season, but he’s shared time at quarterback with junior Myles Walton, who presents more of an option look, while Crowley possesses the stronger throwing arm.

“He’s been very mature about it,” Fairfield said about Crowley occasionally sharing time at QB. “He takes the bad plays to heart, but every week we’re seeing him play better and better.”

Aside from showcasing his skills at quarterback, Crowley said his favorite part of this season has been the opportunity to play with his younger brother, Meshaune, a sophomore running back. They are the sons of Melissa Madison and stepfather Edward Madison.

“I’m not going to tell him this, but he’s better at some things,” Crowley said about his younger brother, with a laugh. “He’s not faster, but he’s built. He will hit you.”

While Fairfield said Crowley can “spin it with the best of them” in the passing game, the senior QB also impressed college coaches with his speed and athleticism in summer camps as an underclassmen, and has received a handful of Division 1 offers.

Most colleges envision him as a receiver at the next level, he said. Academically, he wants to go into the medical field, preferably as an athletic trainer.

Crowley isn’t ready to reveal his choice of colleges yet, but says his “top 3 are Army, Miami (Ohio), and Central (Michigan).”

But that’s in the future. The present for Crowley involves fighting for the ultimate team goal – winning a state championship for a Muskegon team that’s hungry for another trophy.

“Yeah, (a state title) is possible with this group,” he said. “We just have to find that dog in us, that grind in us. We have to do the little things that win games. We weren’t doing that at the beginning of the season, but we’re starting to now.” 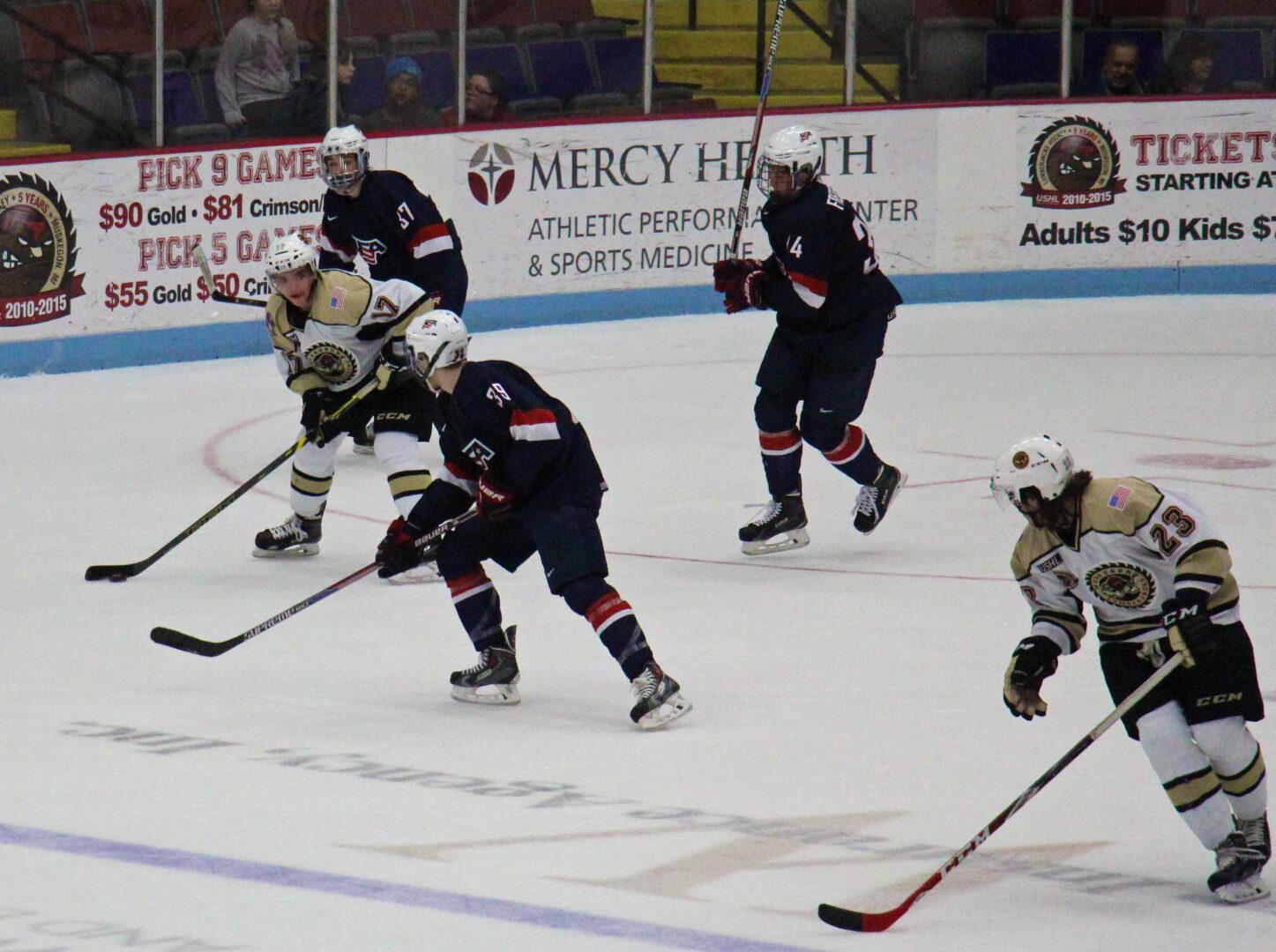 “MPM line” scores three goals, Latorella gets a shutout, as the Lumberjacks down Team USA 4-0