MONTAGUE – It would seem safe to assume that Pat Collins probably groomed his son to be a quarterback from the time he started playing football.

After all, Pat was the starting quarterback for the Montague football team back in his high school days, and led the squad to a state championship game in 1992. 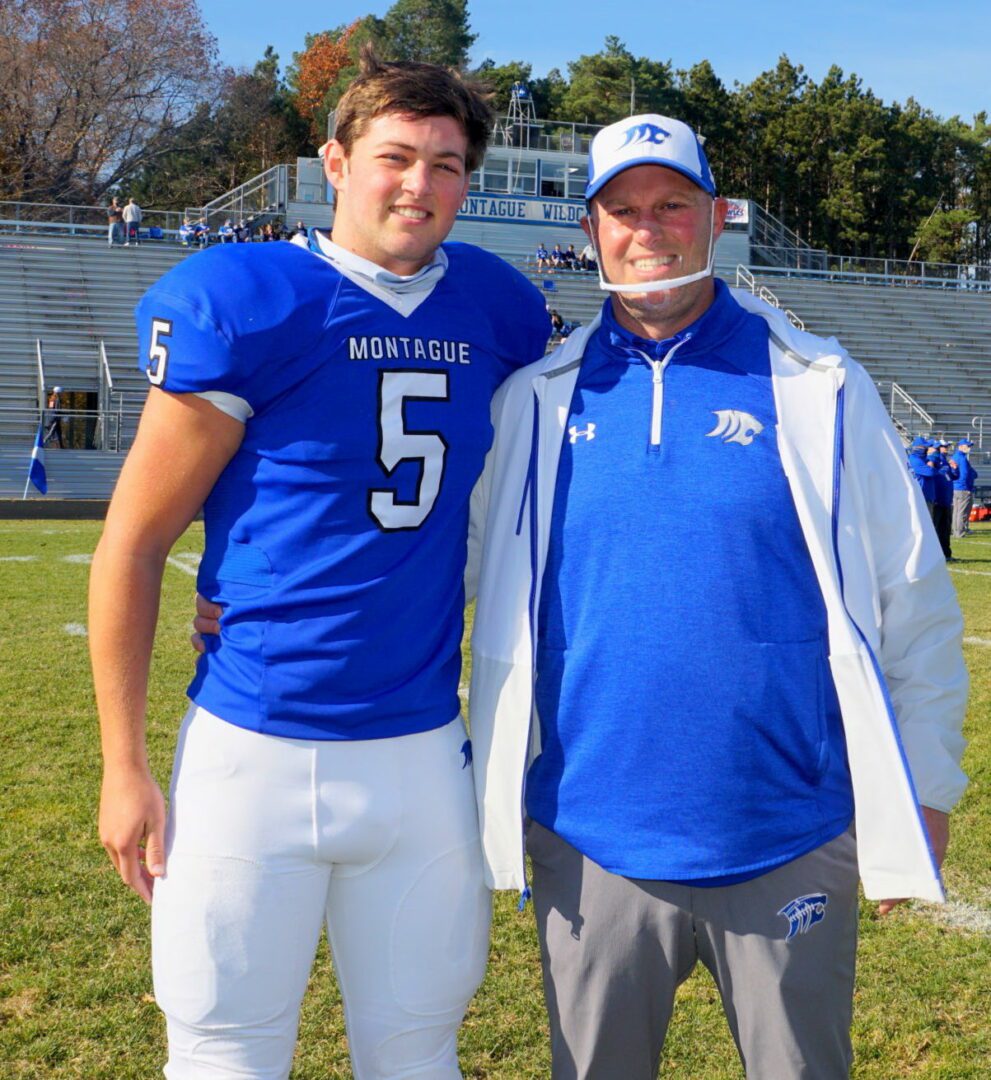 When Drew Collins, his oldest child, was called up to varsity in 2017, everyone figured it was just a matter of time before he was starting under center like his dad did, and they were correct.

When he was small, Drew started out as a running back, then was moved to quarterback by his uncle, the late Matt Collins, who was a longtime youth football coach in Montague.

“It wasn’t my dad who made me a quarterback,” Drew said. “My uncle said this guy is going to be a quarterback, and now I’ve been one since the second grade.”

Pat Collins trusted his brother, who had already demonstrated a knack for picking out and starting to develop promising young quarterbacks, well before Drew came along.

Matt had also coached a young Cody Kater, who went on to become an All-State quarterback at Montague, and led Pat Collins’ teams to the two state titles in 2008 and 2009.

So if his brother saw a potential quarterback in Drew, that was good enough for Pat.

“When I got the varsity job here, Cody was just leaving upper elementary and was just leaving Matt’s program,” Pat Collins said about Kater, who is now an assistant coach on his staff. “Matt told me that I was going to have an opportunity with that group of kids (including Kater), and he was right.

“When he made the decision to play Drew at quarterback, I trusted him and told him ‘Whatever you want to do.’”

It turns out that Matt Collins made the right call, because Drew Collins is clearly the best Montague quarterback since Kater, and is trying to become the first QB since Kater to lead the Wildcats to a state title.

Montague, 8-0 this season and ranked No. in the state in Division 6, has plowed through the playoffs so far this season, with victories over Hart, 75-0, and previously undefeated Clare last Saturday, 50-7.

The Wildcats’ biggest challenge to date will be on Friday night, when they will face off against undefeated Muskegon Catholic Central in a local showdown at MCC that will determine the Division 6 district championship.

Both Coach Collins and quarterback Collins are excited about the challenge.

“It’s cool, a district final with two Muskegon County schools like that,” Pat Collins said. “They’ve got a great program. We’ve always wanted to play them, and we finally got that chance a few years ago. To play them again is special for both sides.”

Drew Collins’ debut as a varsity quarterback came in the third game of his sophomore season in 2018.

He was good right off the bat, passing for 139 yards and three touchdowns in a 55-0 victory over Mason County Central. Over the season he completed 104 of 179 passes for 1,947 yards and 18 touchdowns, and rushed for 598 yards and seven TDs.

The Wildcats had a 7-2 regular season record that year, then got hot in the playoffs, reeling off victories over Fennville, Newaygo, Schoolcraft and Traverse City St. Francis to reach the Division 6 state championship game at Ford Field in Detroit. 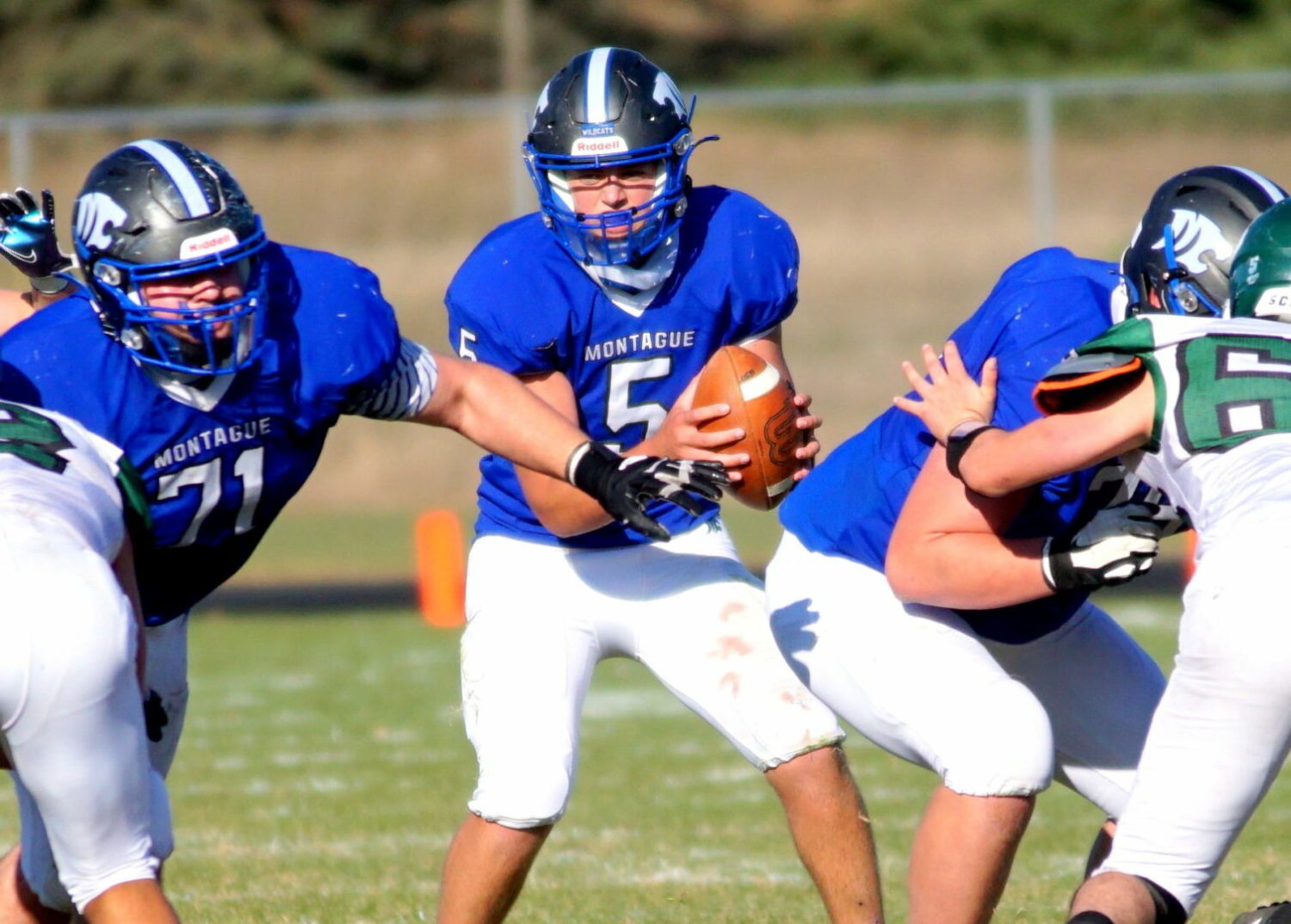 Collins takes the snap from center as No. 71 Chris Kessler blocks up front against Clare on Saturday. Photo/Leo Valdez

The playoff run ended in a 42-28 loss to defending state champion Jackson Lumen Christi in the finals.

Like a typically talented sophomore playing in his first state championship game, Drew had his ups and downs against Lumen Christi. He completed 5 of 12 passes for 142 yards, including two touchdowns, but also tossed two interceptions.

The Wildcats again finished 7-2 in the regular season, then got hot again in the playoffs, beating Newaygo, Ravenna and Meridian to earn a berth in the state semifinals against Maple City Glen Lake.

That game was going well, and Drew and his teammates were on the verge of making it back to the state finals, before everything collapsed late in the contest.

Montague had a seemingly safe 24-10 lead in the fourth quarter, but Glen Lake came storming back, scoring two late touchdowns, including one as the regulation clock expired.

Montague had the ball first in overtime and took a 30-24 lead when Drew scored on a five-yard run. The extra point failed and the Wildcats led by six points.

Glen Lake faced fourth down from the Montague 5-yard line on its OT possession, and the Wildcats needed just one more defensive stop to win and go back to the finals.

Glen Lake quarterback Reece Hazelton threw a pass to the corner of the end zone that was caught by Justin Bonzalet. The catch appeared to be out of bounds, but after a long moment of indecision, the referees called it a touchdown.

The defeat was devastating for the Wildcats, particularly since it was decided by what appeared to be a bad call. There were a lot of tears among the players and fans, and everyone looked stunned. But the Wildcats handled the situation with class, and refused to blame the officials.

“The officials are like us, amateurs,” Coach Collins said after the game. “So I’m not going to take anything away from the officials. It’s just hard for them to see sometimes.

“It was a busy game, with a lot of emotion. Our guys make mistakes, coaches make mistakes and officials make mistakes. They don’t have replay to help them out, so it’s not their fault. It’s just how it goes.”

The loss was particularly disappointing for Drew, who had a terrific game, rushing for 175 yards and two touchdowns and completing 5 of 7 passes for 98 yards and one touchdown.

But he said he and his teammates had nobody to blame but themselves.

“We could have done some things differently,” Drew said. “It would have been easy to blame the refs, but we had to take the fall ourselves, because we could have put them away earlier.”

One more shot at the big prize

Being good sports about the bad call did not mean that the loss stung any less for the Wildcats. It was still very much on their minds when they reported for practice this August.

Drew had a photo that someone had taken, showing himself and several of his teammates sitting on the turf  at Clare High School after the overtime loss, despondent over the stunning turn of events. He stapled it to a tree near the team’s practice field, to provide inspiration for the 2020 season. 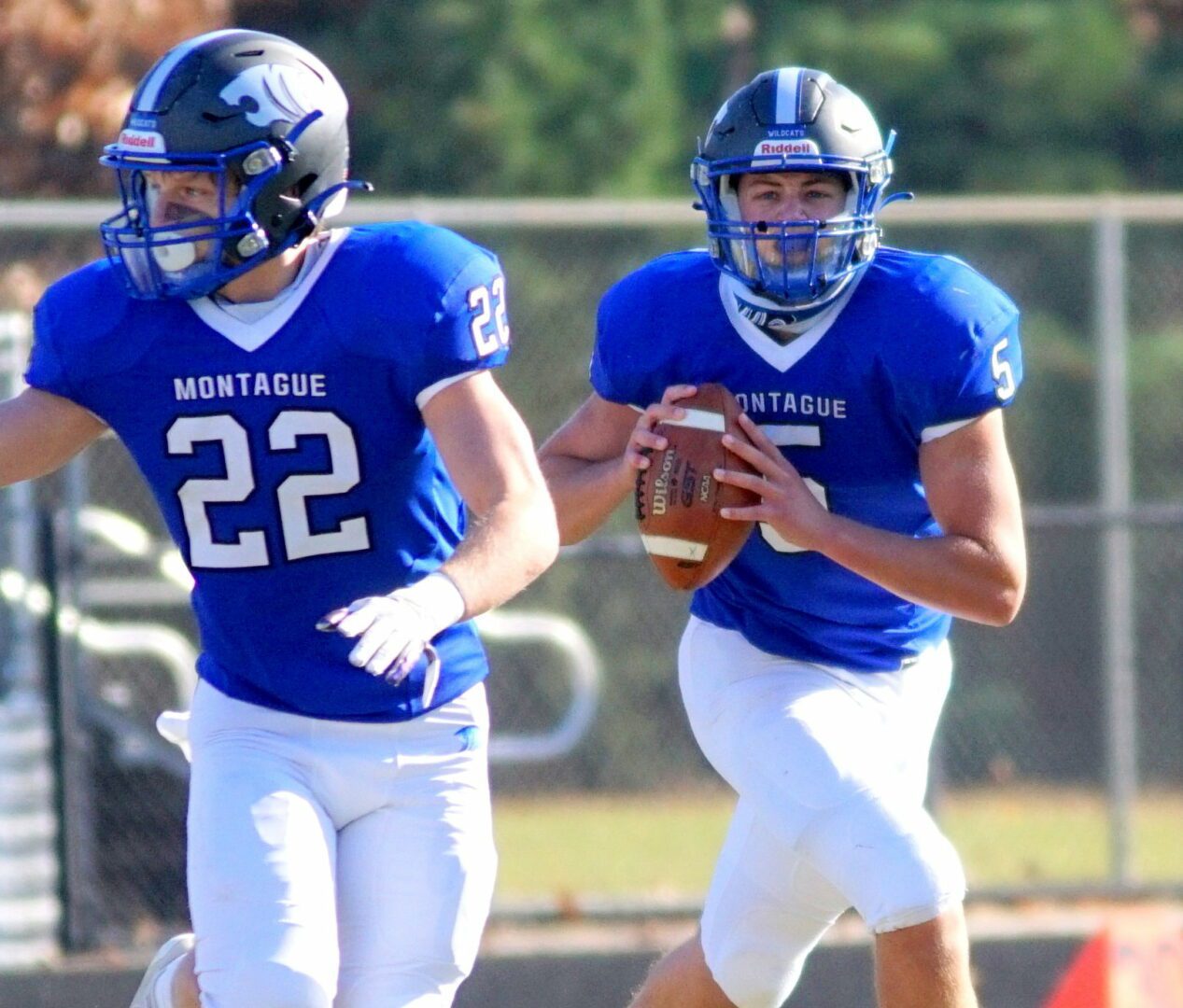 Collins rolls to his left as No. 22 Dylan Everett looks to block. Photo/Leo Valdez

“We’ve fallen short a couple of times,” Drew said. “It took us a state finals loss, and a one-point semifinal loss in overtime, to figure out that the little things matter. That’s been kind of the theme this year – do the little things right, because the other team may not be doing them.”

Of course the 2020 season almost didn’t happen. The Wildcats were practicing on Friday, Aug. 14 when news came that the Michigan High School Athletic Association had postponed prep football until the spring, due to COVID-19.

“I was devastated,” Drew said. “This was the year we had been dreaming about since we were little kids. We put our heart and soul into football, and we were thinking, ‘Why us?’ It was probably worse than the semifinal loss.”

Despite the disappointment, and no guarantee that a spring season would actually happen, many of the Wildcats did what players from winning programs could be expected to do – got back to practice on an informal basis and kept working to improve, so they could be ready whenever football began again.

“I probably took a week off, but then I worked harder than ever before in those next few weeks,” said Drew, who is a two-way starter who also plays safety for Montague. “We looked at it as an opportunity. We were planning on being the best team we could be in the spring.”

As it turned out, they didn’t have to wait that long. On Sept. 4 the MHSAA announced that the season was back on, and the Wildcats were more than ready.

They went 6-0 in the shortened regular season, with the highlight being a thrilling 34-31 double overtime victory over rival Whitehall in Week 5, en route to a West Michigan Conference championship.

Now the Wildcats are preparing for the cross-county showdown at MCC, with the winner advancing to the regional round of the playoffs – which is also the state quarterfinal round – and the loser calling it a season.

Whatever else happens on Friday, Coach Collins knows his team will be in capable hands of a great senior quarterback, because he was smart enough to listen to his brother all those years ago.

“He’s a very hard worker,” Coach Collins said about Drew. “When you put together every little hard working moment, over time it just grows, and his growth has been pretty big, in terms of speed and arm strength and accuracy.

“Now that he’s a senior, we’re just wondering, what is he going to do next? He’s really in control of what we do offensively.”