some new challenges as the tournament approached this season.

They were not quite as successful in the regular season this year as they have been in the past, posting a good but not great 21-16 record. 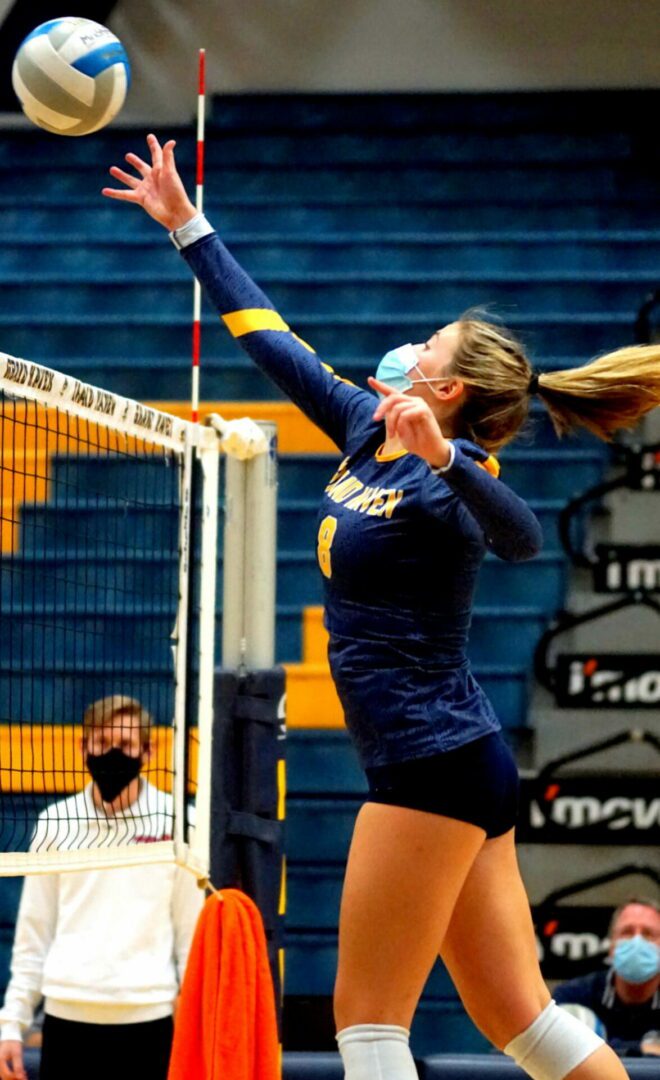 Ashlyn Pahl taps the ball over the net for Grand Haven. Photo/Leo Valdez

They had to open districts with three players unable to compete due to their proximity to people who have tested positive for COVID.

And they had to open against Mona Shores, a team that beat the Bucs earlier in the season and won the O-K Green conference championship this fall.

But Grand Haven rose to all of those challenges and walked away with an impressive 3-0 victory over Mona Shores on Monday in a district quarterfinal match at Grand Haven High School.

“I am so proud of these kids coming out the way we did, with everything we have been through this season,” said Grand Haven coach Aaron Smaka.

“It has been a challenging season with injuries and sicknesses, so we have had to change lineups a lot. No matter where we go the kids have stepped up. We are just trying to get better to see how long we can make this thing go.”

The Bucs only trailed once during the opening set at 1-0 before scoring the next five points on a service run by Samantha Boeve. 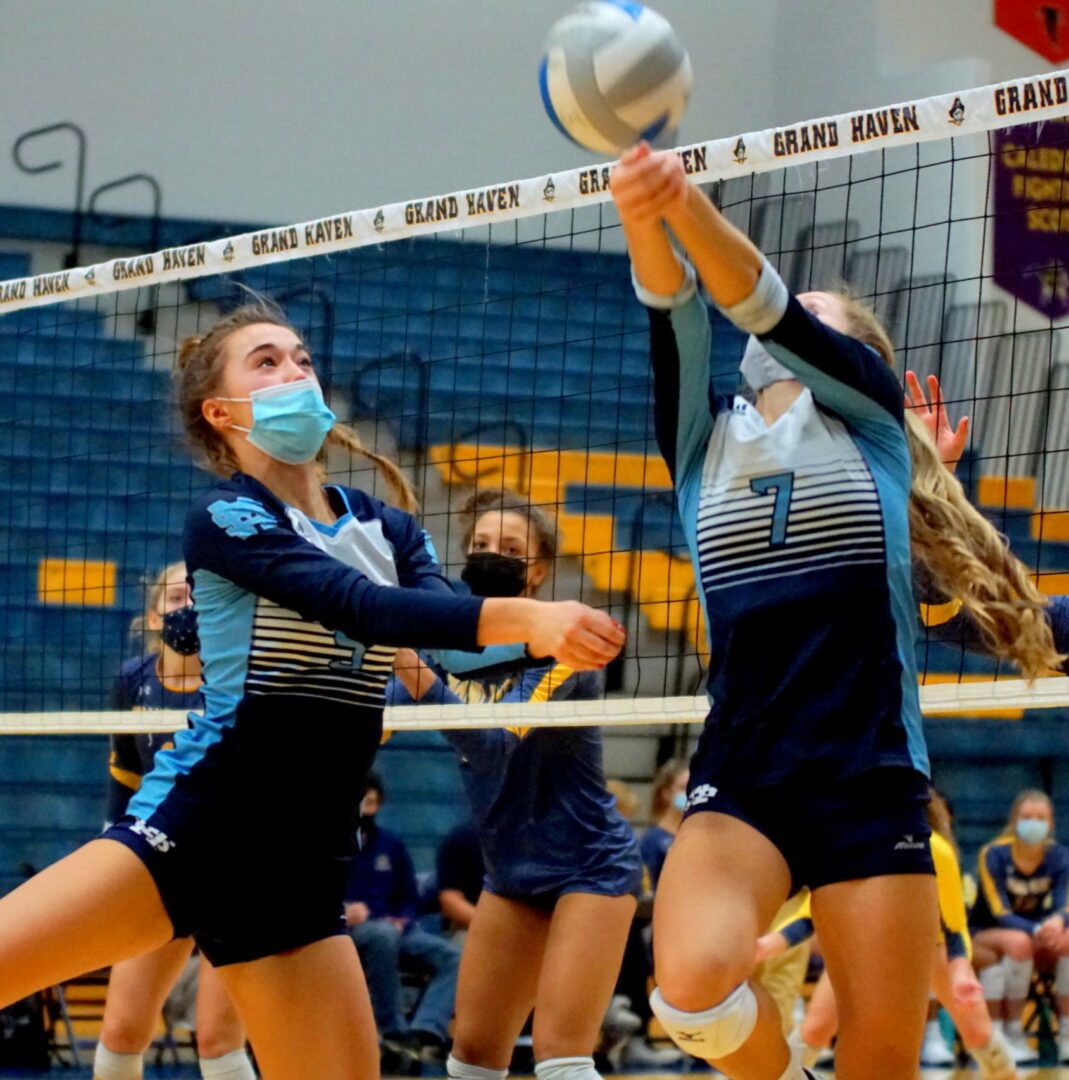 Mona Shores tried to mount a late comeback, but could only cut its deficit to five points before losing by six in the first set.

The Sailors scored the first two points of the second set before Grand Haven outscored the Sailors 10-3, sparked by a long service run by Mackenzie Gross, to take a 10-5 lead.

Mona Shores cut its deficit to 14-13 before the Bucs responded with an 11-3 run to take the second set.

Grand Haven opened the final set by jumping out to a 5-0 lead on a service run by Boeve.

Mona Shores battled back and forced ties at 18-18 and 20-20 with successful service runs from Holli Brus, Brooke LeRoux and Olivia Sobczak. But Grand Haven scored the last five points to take the set and the match.

The Bucs were led offensively by Gross with 13 kills while Ashlyn Pahl added nine. Boeve chipped in with 37 assists.

Mia Swierbut paced Grand Haven defensively with 14 digs while Hallie Rittel and Gross each had 10.

“We struggled serving big time tonight,” said Mona Shores coach Kathy Hellmann, whose team finished the season with a 19-10 overall record.  “I feel that we were on our heels defensively as well. It has been such a roller coaster ride this season, and this team did things that I never thought would happen this year.”

LeRoux led the Sailors with 13 kills and nine digs while Grace Norris chipped in with 12 assists. 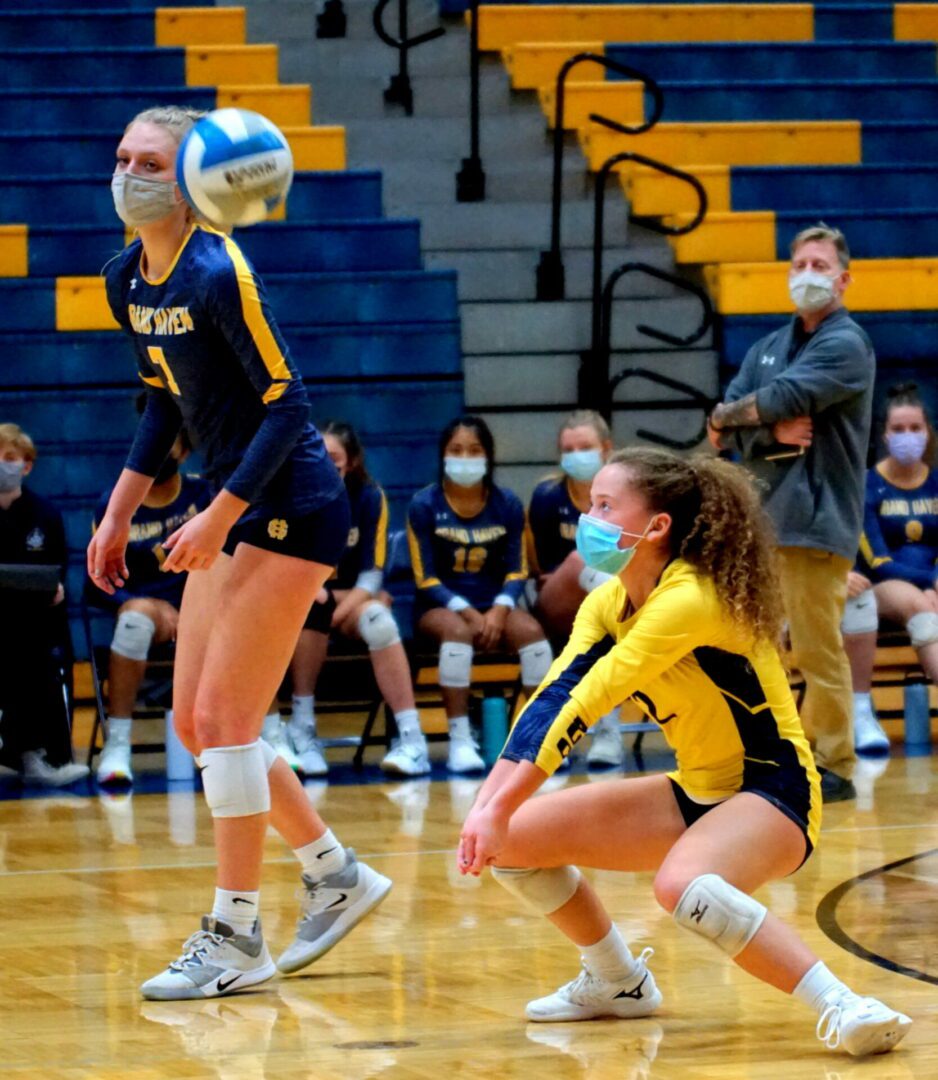 Mia Swiderbut gets ready for a dig while No. 7 Mackenzie Gross watches. Photo/Leo Valdez 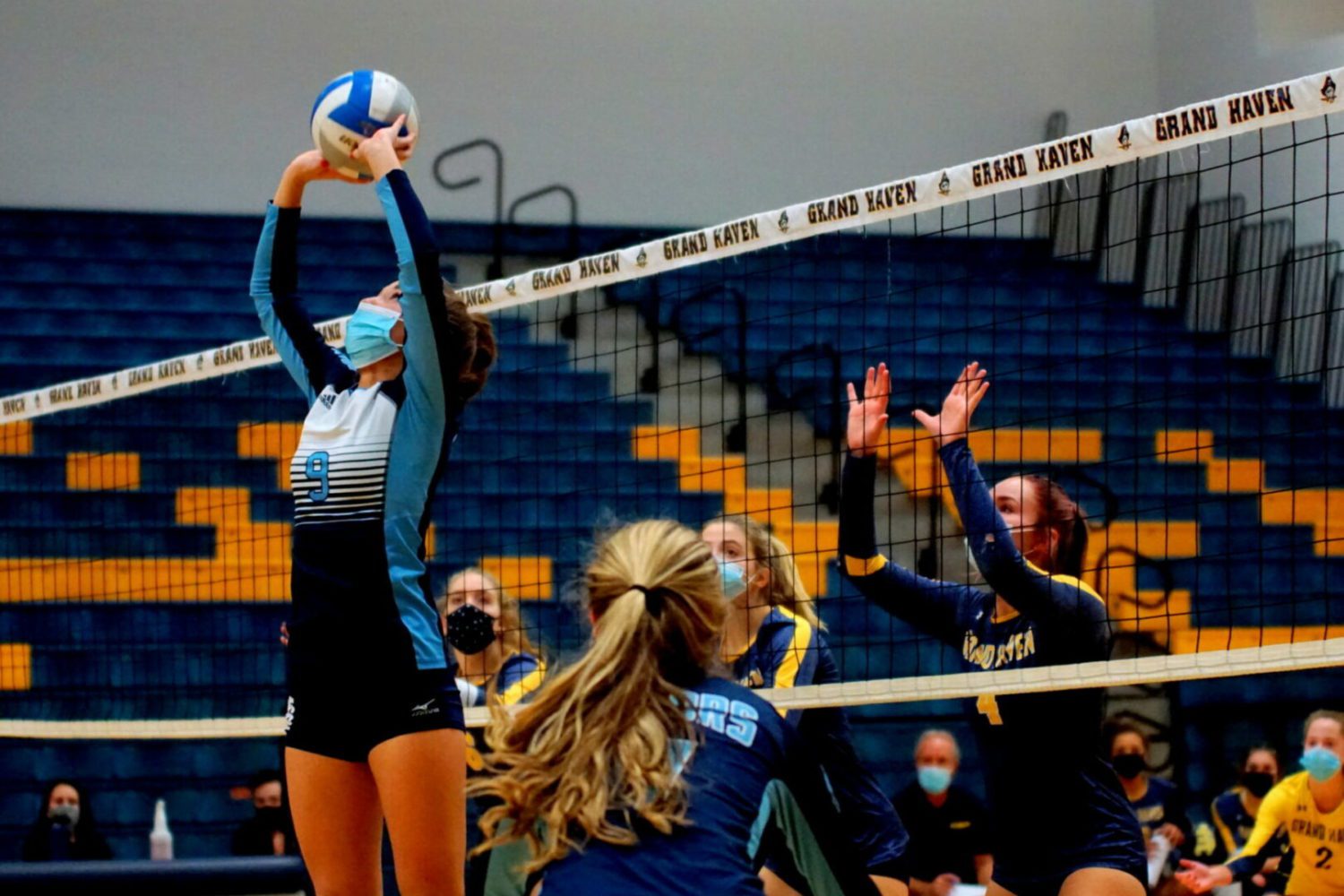 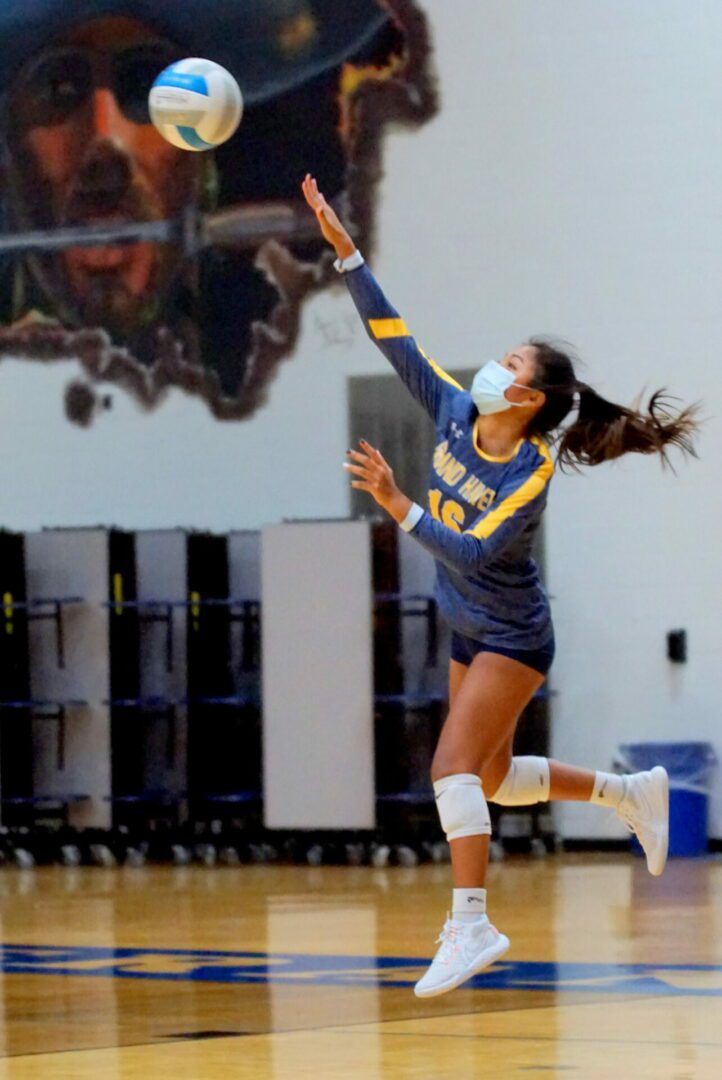 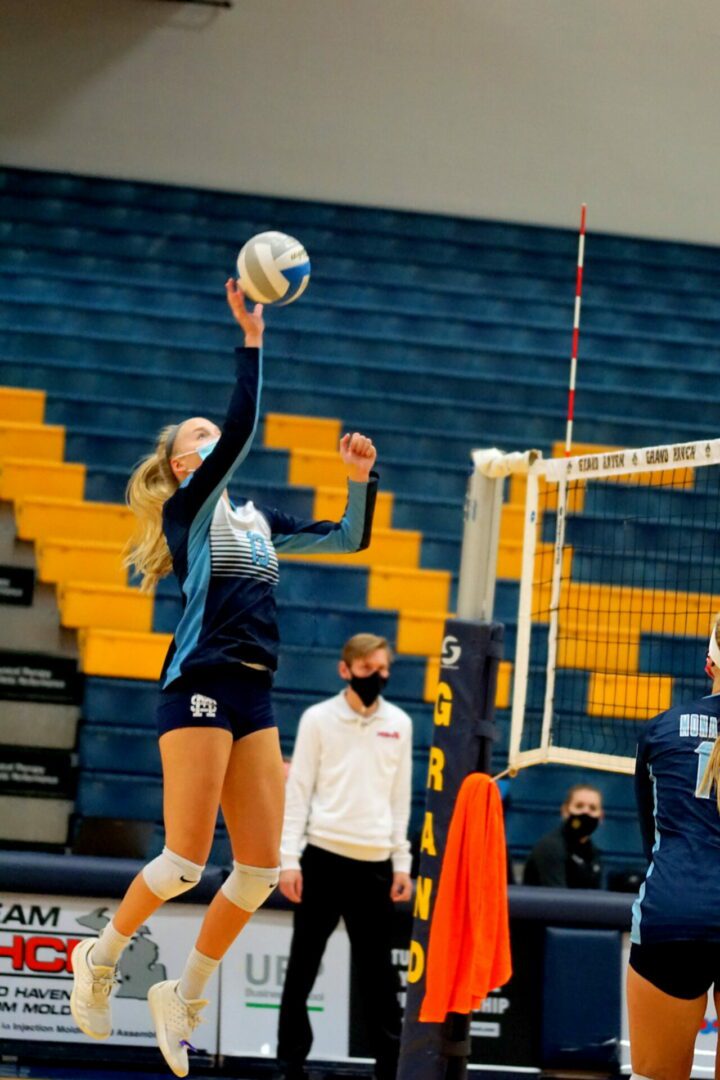 Bri Wade goes for a play at the net for Mona Shores. Photo/Leo Valdez 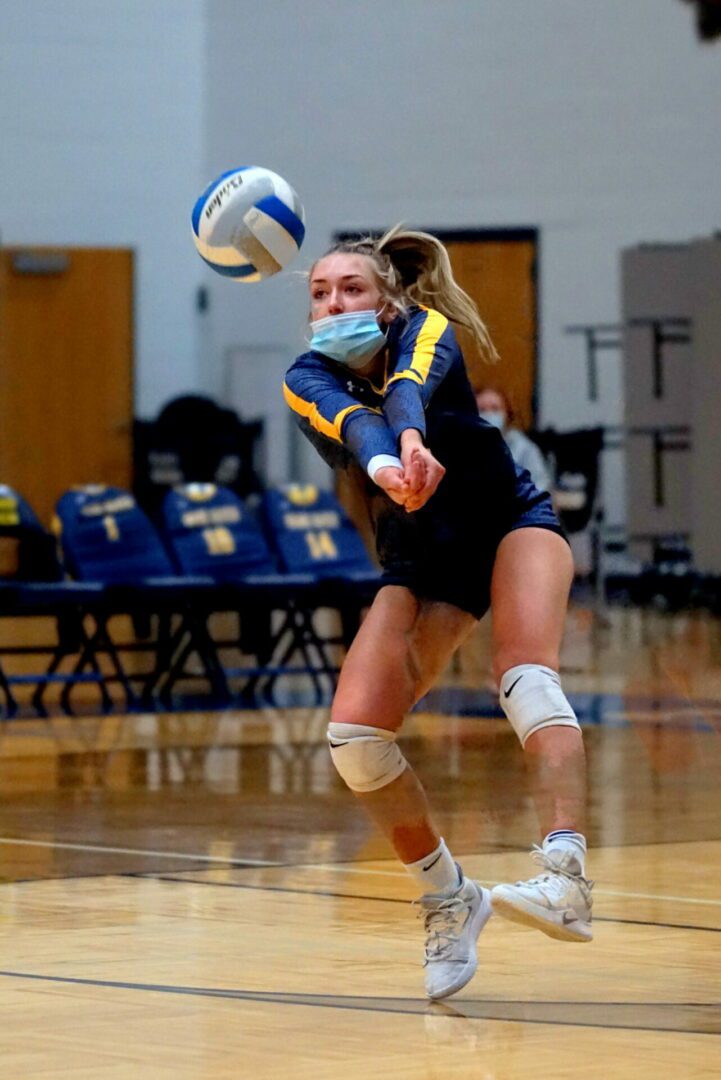