The Muskegon Lumberjacks suffered their first loss of the season, falling to the Green Bay Gamblers 4-2 on Saturday night at the Resch Center in Wisconsin. 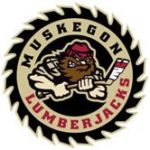 week Sunday against Team USA. Faceoff will be at 4:05 p.m.

The Lumberjacks opened the scoring 6:10 into the first period with a goal from Jacob Guevin.

Muskegon increased its advantage to 2-0 on a goal by Jack Williams at the 11:03 mark of the first period.

John Mittelstadt cut the Gamblers deficit to 2-1 at the 18:15 mark of the first period, then Jackson Kunz scored 9:03 into the second period and at the 1:43 mark of the third stanza to give Green Bay a 3-1 lead.

The Gamblers closed out the scoring 10:34 into the third period with a goal from Greg Spitznagel.

Green Bay outshot the Lumberjacks by a 40-35 margin as Matt Davis got the win in net for the Gamblers, stopping 33 of 35 shots.

Thomas Sinclair, Ben Strinden and John Farinacci each notched an assist for the Lumberjacks.