MUSKEGON – The Muskegon Lumberjacks’ first two scheduled home games of the 2020-21 season, slated for Nov. 27-28 against the

Youngstown Phantoms, have been postponed.

That became obvious on Sunday night, when Michigan Gov. Gretchen Whitmer and other state officials announced that most sporting events in Michigan will be cancelled for at least three weeks due to the COVID-19 spike.

The state also closed all ice rinks, but luckily the Lumberjacks have been designated as a professional sports organization, and can continue to have daily practices at Mercy Health Arena, although the facility will be closed to the public.

The Jacks will continue to play scheduled road games – when it’s possible – until Dec. 18-19, when they are scheduled to host the Chicago Steel in two games at home.      .

But what lies ahead remains pretty iffy, for home and away games.

As of today, no other states with teams in the United States Hockey Leagues have ordered a general shutdown like Michigan, according to Lumberjacks President Mike McCall. But COVID has already been a major disrupting factor throughout the league this season.

Numerous USHL games have been postponed due to players testing positive, and several of those postponements have affected the Jacks. 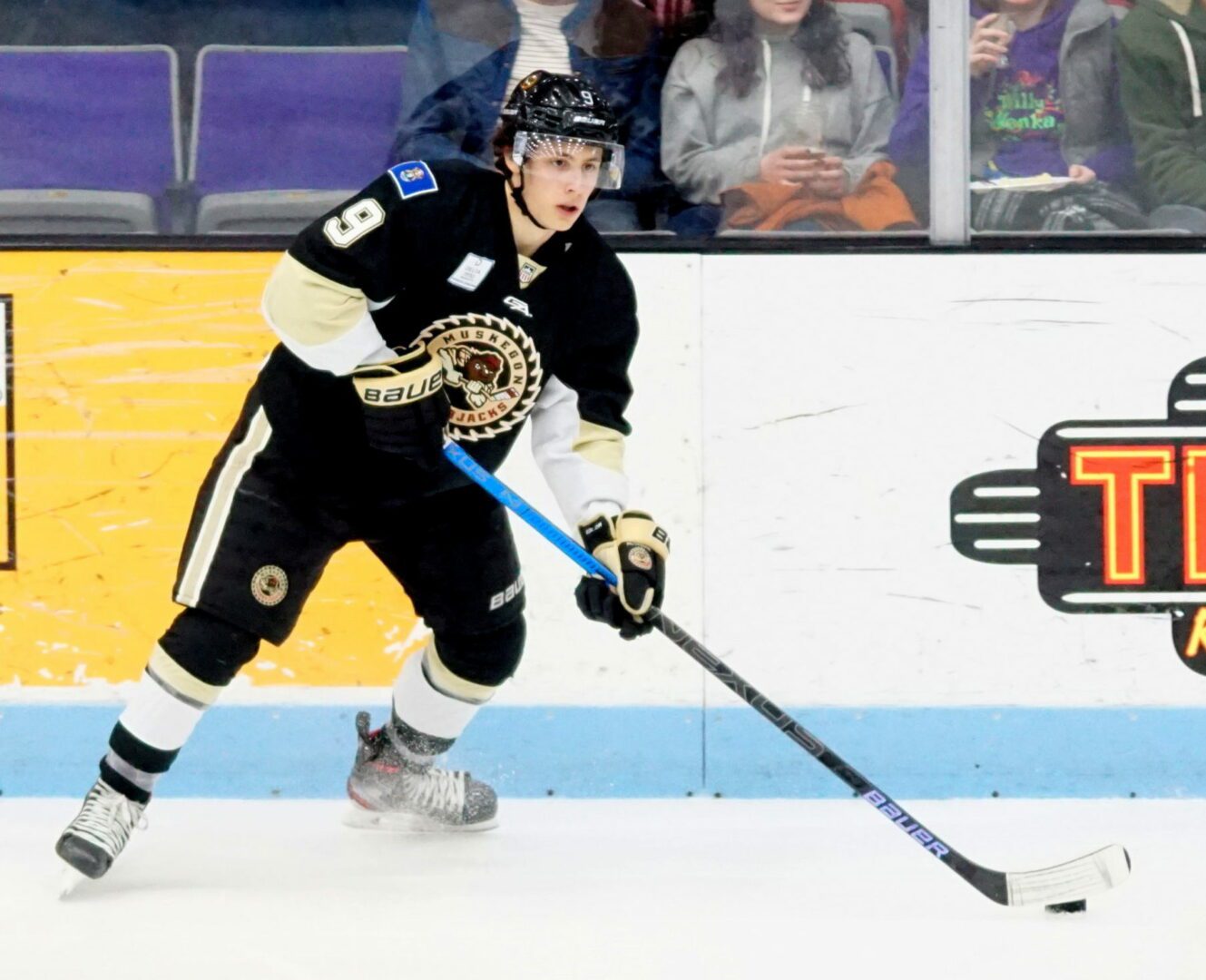 Last Sunday, for instance, the Jacks were scheduled to play the Team USA Under-18 squad at its home rink in Plymouth, Michigan, but the game was postponed due to COVID. So the Jacks arranged to play a road game in Chicago against the Steel on Saturday night, instead.

The Jacks just learned that their two games scheduled for this weekend in Dubuque, Iowa have been postponed due to positive COVID tests on the Fighting Saints’ roster.

So Muskegon will travel to Plymouth to play the Team USA Under-17 squad in a hastily-arranged Sunday game this weekend, and the Dubuque games will have to be rescheduled.

At the moment the Lumberjacks are not planning any games for Thanksgiving weekend, when they were supposed to host their first two home games.

The Jacks could have played in Youngstown, Ohio both nights that weekend, with Youngstown agreeing to come to Muskegon on a future weekend when they were scheduled to host. But the arena is Youngstown is not available on Thanksgiving weekend, McCall said.

“We are exchanging ideas for dates – hopefully we’ll come up with something,” he said.

McCall said none of this is surprising, and the Lumberjacks are determined to work with the league and other teams to get all 54 regular season games in, one way or the other.

“We are prepared to have games rescheduled until there is a vaccine,” he said. “We know there will be some road games postponed, as well. When that happens, we will talk to the other teams and schedule makeup games.”

The Lumberjacks have not been forced to back out of any games due to COVID infections on their roster. While a few Muskegon players have tested positive, none have done so in the past month to six weeks, according to McCall.

“The big thing is that (the players) are here for a purpose, to develop their skills, and the last thing they want to do is do something stupid that could get in the way of that,” McCall said. “They wear masks all the time at the arena, and they are staying away from social environments. Overall they are spending a lot of time at the arena, and we have good safety protocols in place.”

The good news is that the Lumberjacks were thinking ahead when the USHL was building the season schedule. With strict crowd restrictions in place in Michigan, the team asked the league to give them mostly road games in November and December.

As a result, they only had six home games scheduled in those two months – the Thanksgiving weekend games which now have to be rescheduled, along with Dec. 18-19 and Dec. 29-30 games, which could still be played.

The hope is that the COVID rate in Michigan will level off by January, so the Lumberjacks can sell more tickets and have bigger crowds.

The team will only allow up to 500 spectators at the four December home games, and most of the tickets will go to season ticket holders and sponsors.

The Jacks are scheduled to have 21 home games between January and April.

“We would rather have (the state shutdown) now than have it happen in January or February, when attendance is usually much higher,” McCall said. “We kind of thought this might happen at some point, so better earlier than later.”

The possibility remains that the COVID situation could eventually force the league to end the 2020-21 season early. If that occurred, it would simply be a matter of moving on to the next step, according to McCall.

“Our ownership is already committed if the league is going to be committed to playing through the end of this season,” he said. “If the league decided for any reason to take a sabbatical, we would start working on next season right away.”