KENT CITY – When the fourth-ranked team in the state meets the seventh-ranked team with a district trophy on the line, a long and heated

battle should be expected.

But that was not the case on Thursday, when the North Muskegon volleyball team swept Western Michigan Christian 3-0 in the Division 4 district championship match at Kent City High School. 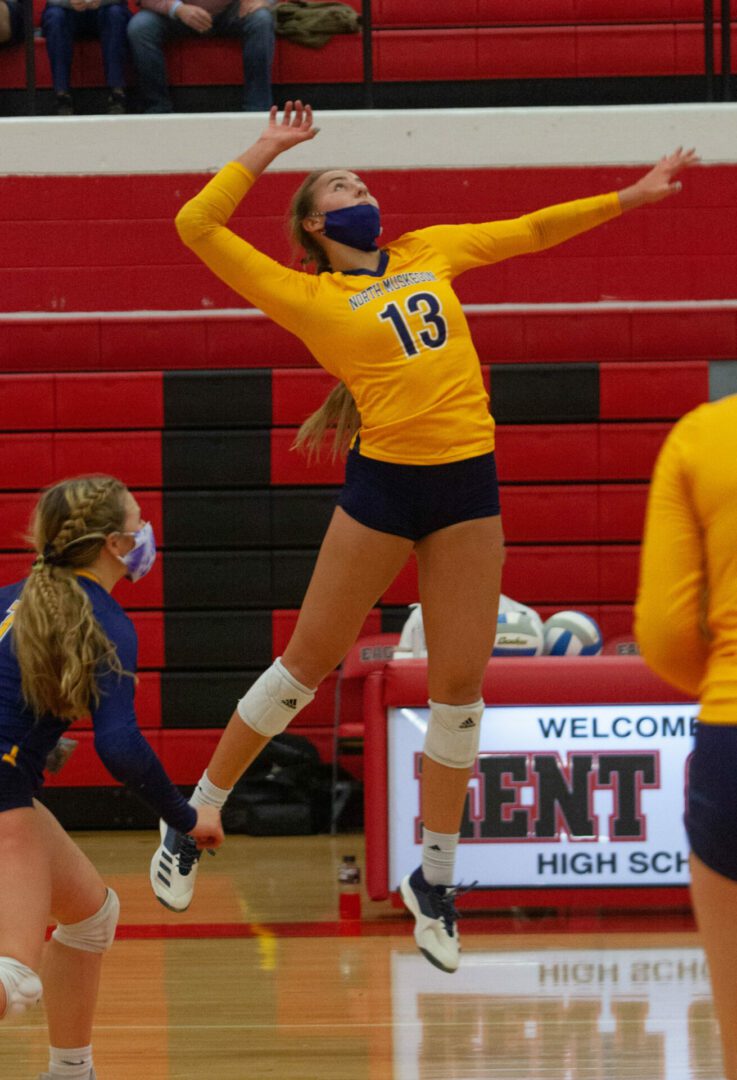 Syann Fairfield goes up to spike the ball for North Muskegon. Photo/Jason Goorman

They now advance to play Grandville Calvin Christian on Tuesday at 7 p.m. in a regional semifinal match at Shelby High School.

WMC finished the season with a 25-11 record.

“It feels really good,” said North Muskegon head coach Heather Claussen about winning a second district title in three years, and avenging a loss to WMC in last year’s finals. “This is what we’ve been working for since August. I’m glad the girls showed up and played awesome tonight.”

The Norse didn’t start out sharp, trailing 13-8 in the first set before calling a much-needed time out. Then they regrouped and went on a 17-4 run to clinch the first set in convincing fashion.

“They’re relentless right now,” Claussen said about her players. “They have a good, calm composure about themselves and don’t get too rattled.”

Western Michigan Christian appeared to win the second set 25-19, but a late call by the referees cost the Warriors a point and made the score 24-20.

The Norse took full advantage, closing the set with a 6-0 run to take a commanding 2-0 lead in the match.

“We won the second set 25-19 and we were coming off the court,” said WMC head coach Trent Smillie about the call. “Then we found out the ref made a call after we had already celebrated the point. That got North Muskegon back into it, and they were able to squeak it out.” 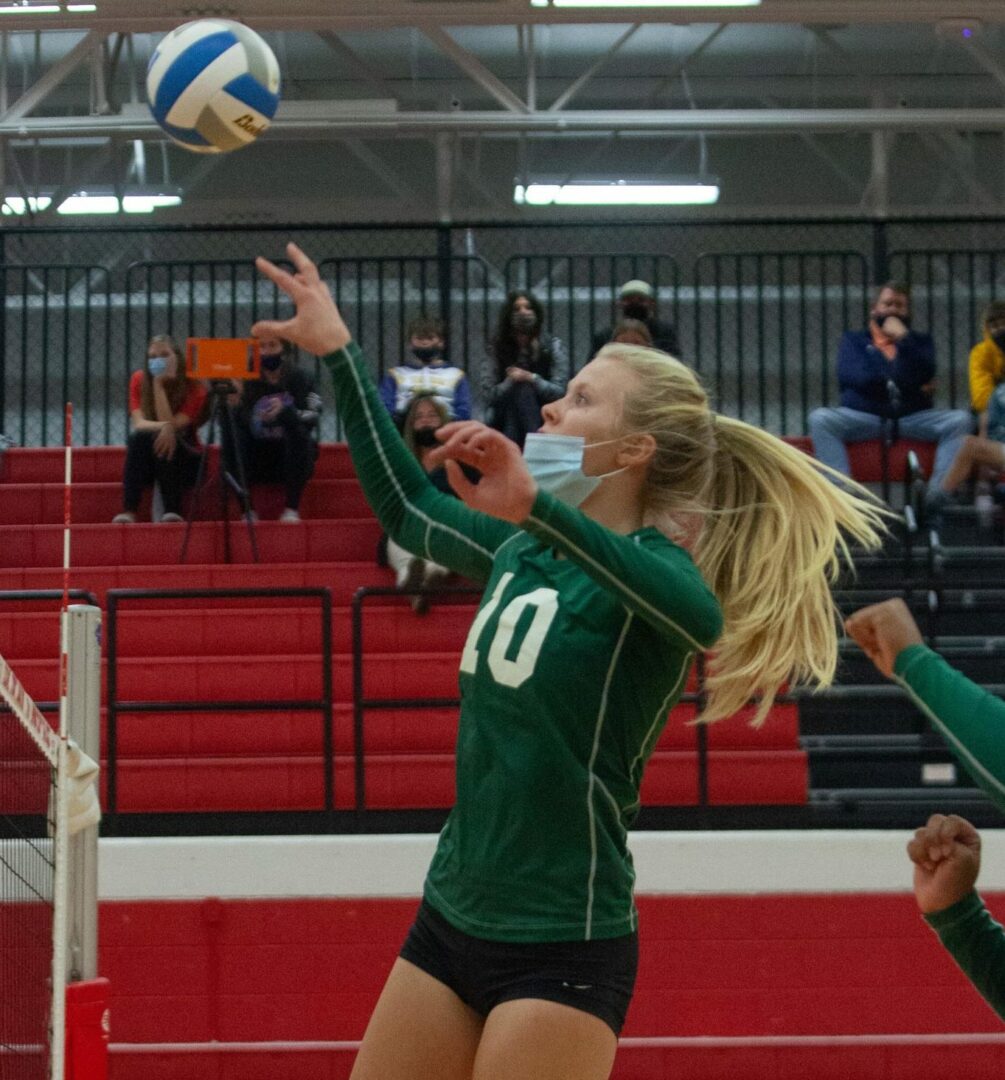 Taylor Folkema sends a shot in the opposite direction for a WMC point. Photo/Jason Goorman

The teams went back and forth in the third set. The score was tied 23-23 before North Muskegon scored the final two points to seal up the district championship.

“It feels great,’ said Norse senior Syann Fairfield about winning a title in her senior season. “Everyone wants this, and you can really tell when we’re playing. Nothing drops, and it’s always 100 percent. We always knew Western Michigan was a great team, and we’ve really been preparing for the rivalry win.”

Fairfield led the Norse with 18 kills on the night while Megan House led in blocks with 12 and aces with three.

“Tomorrow,’ said Claussen, when asked when her girls will start preparing for their next match. “They have about 10 to 12 hours to enjoy it, and we’ll get back in the gym tomorrow.” 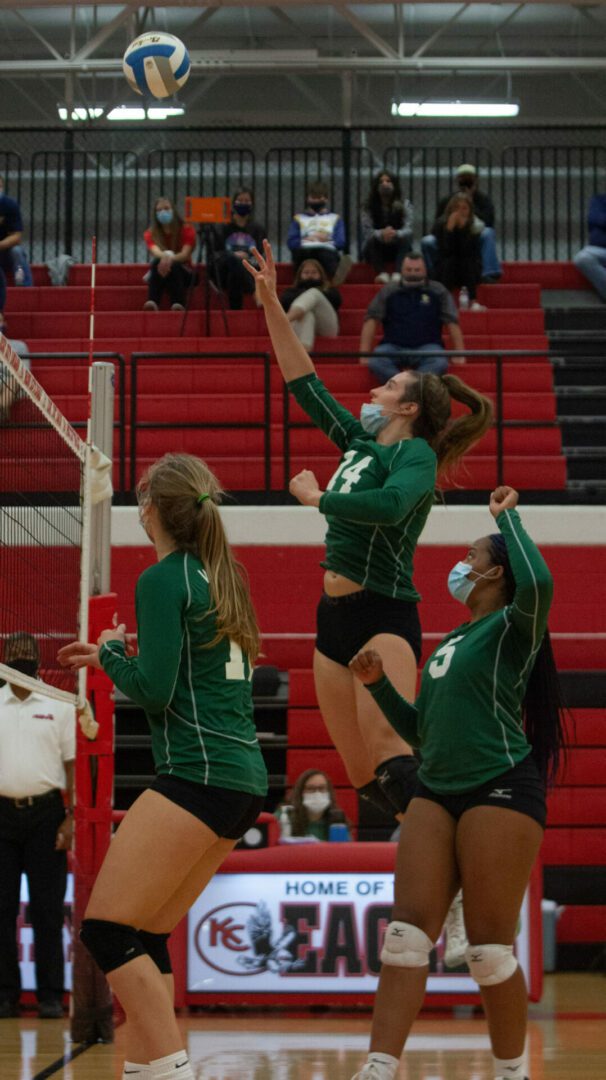 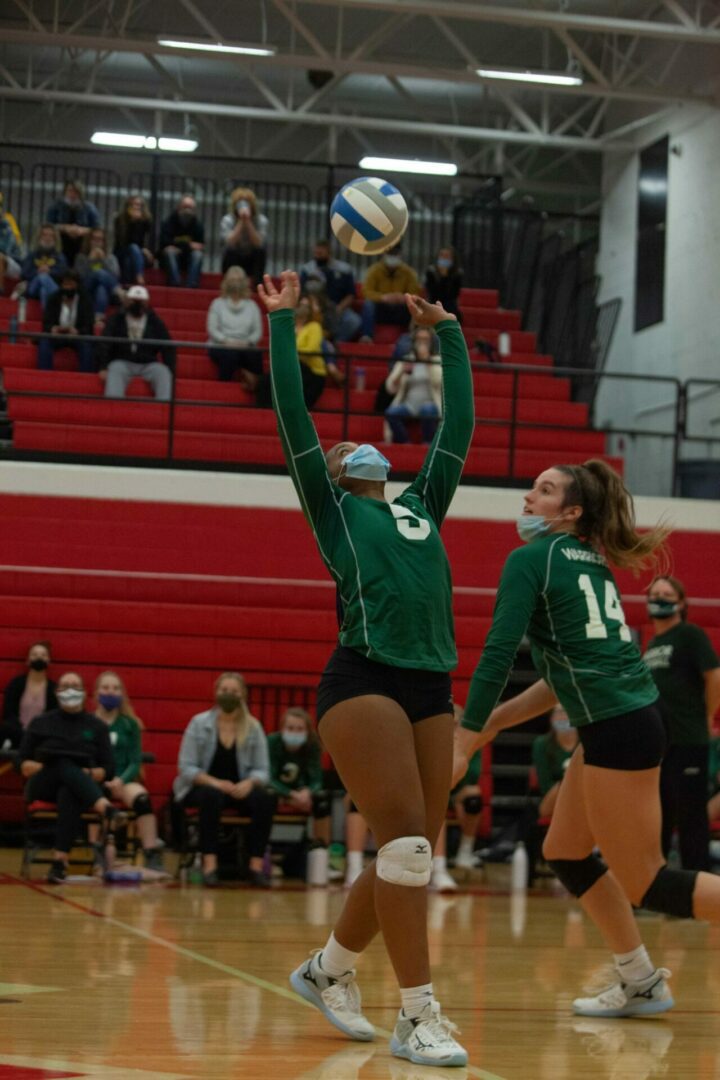 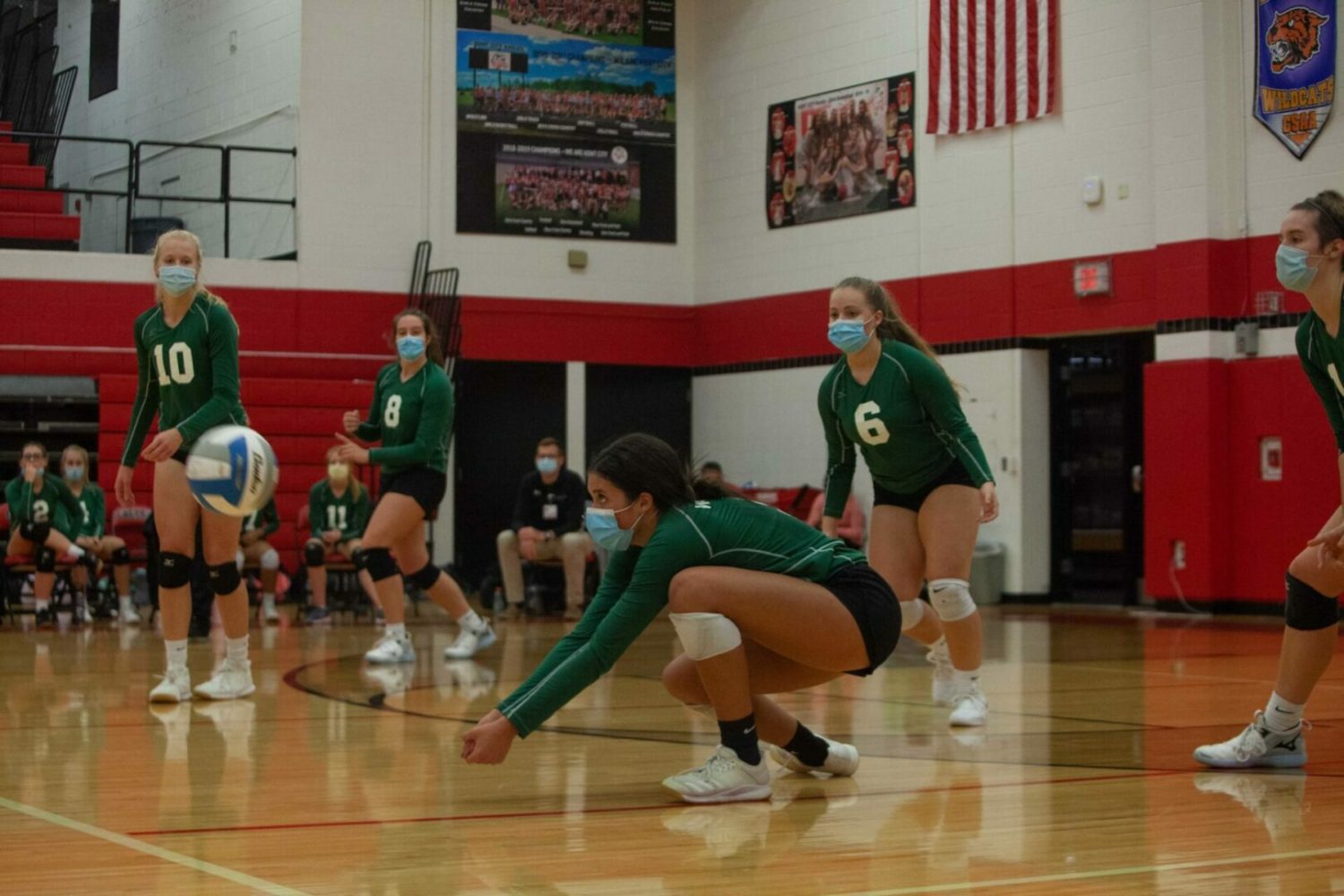 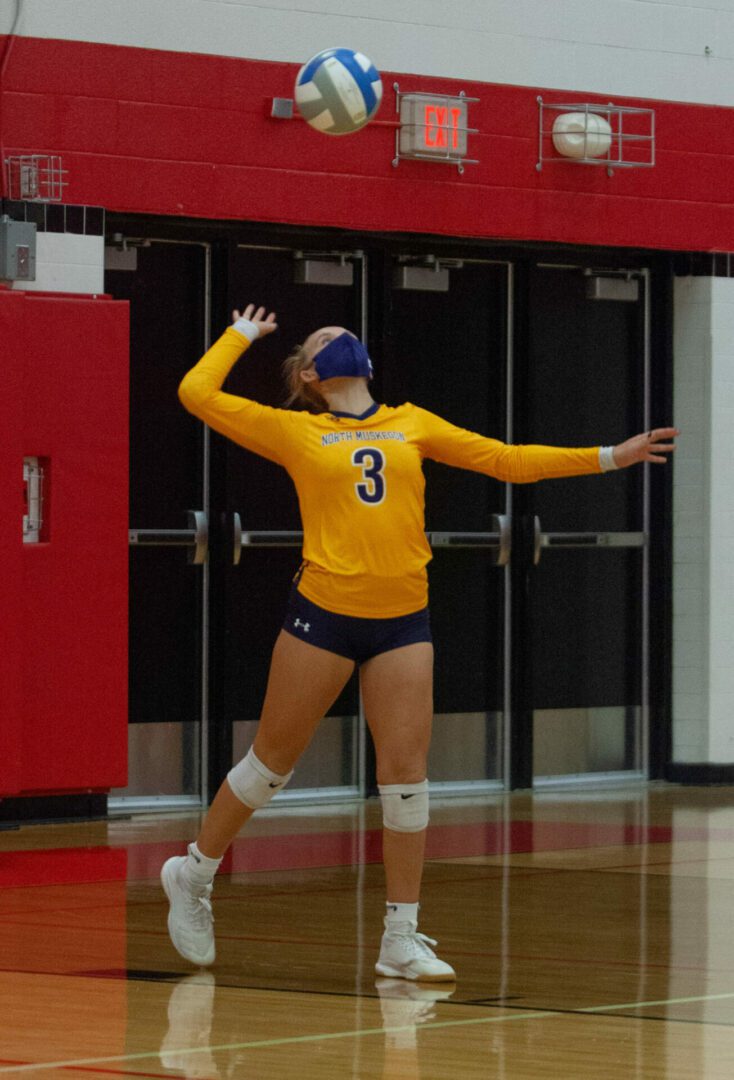 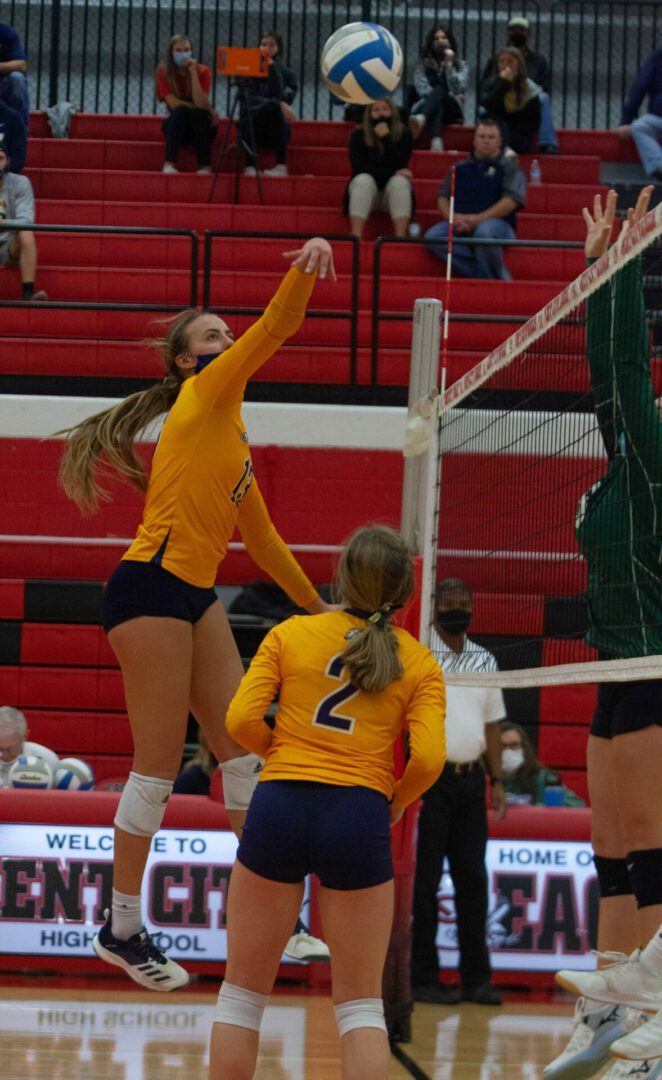 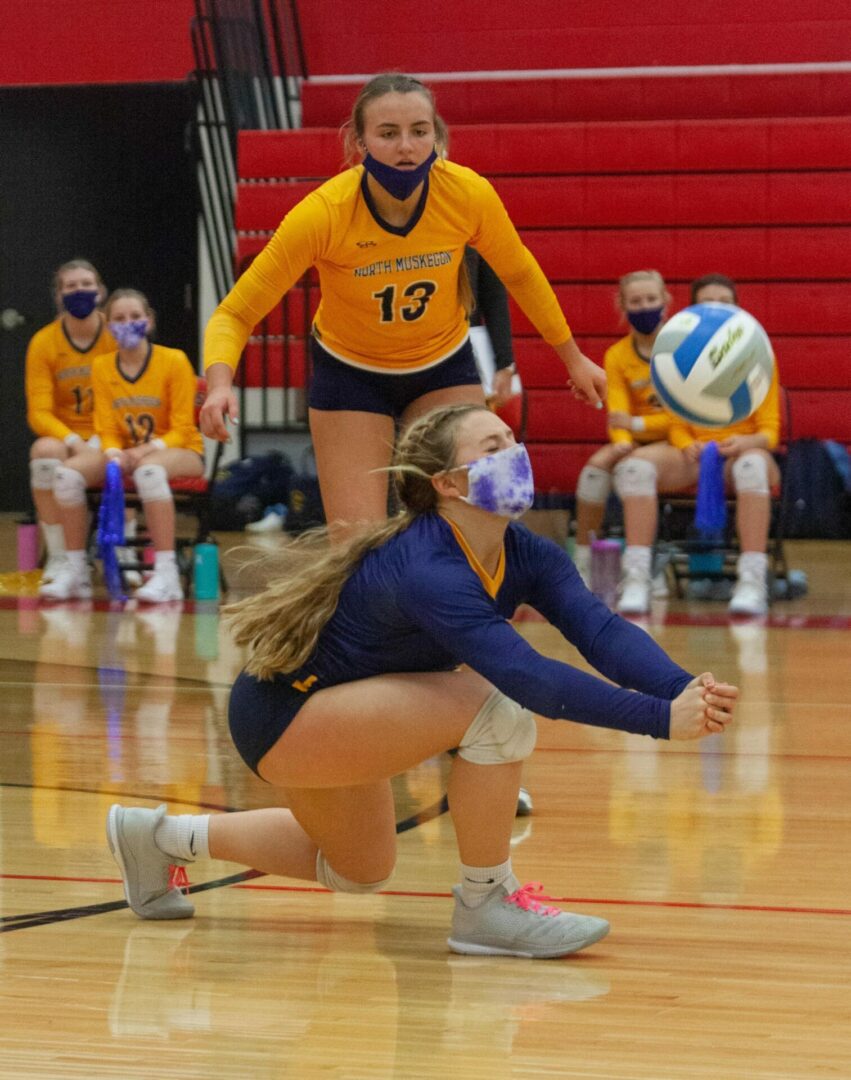 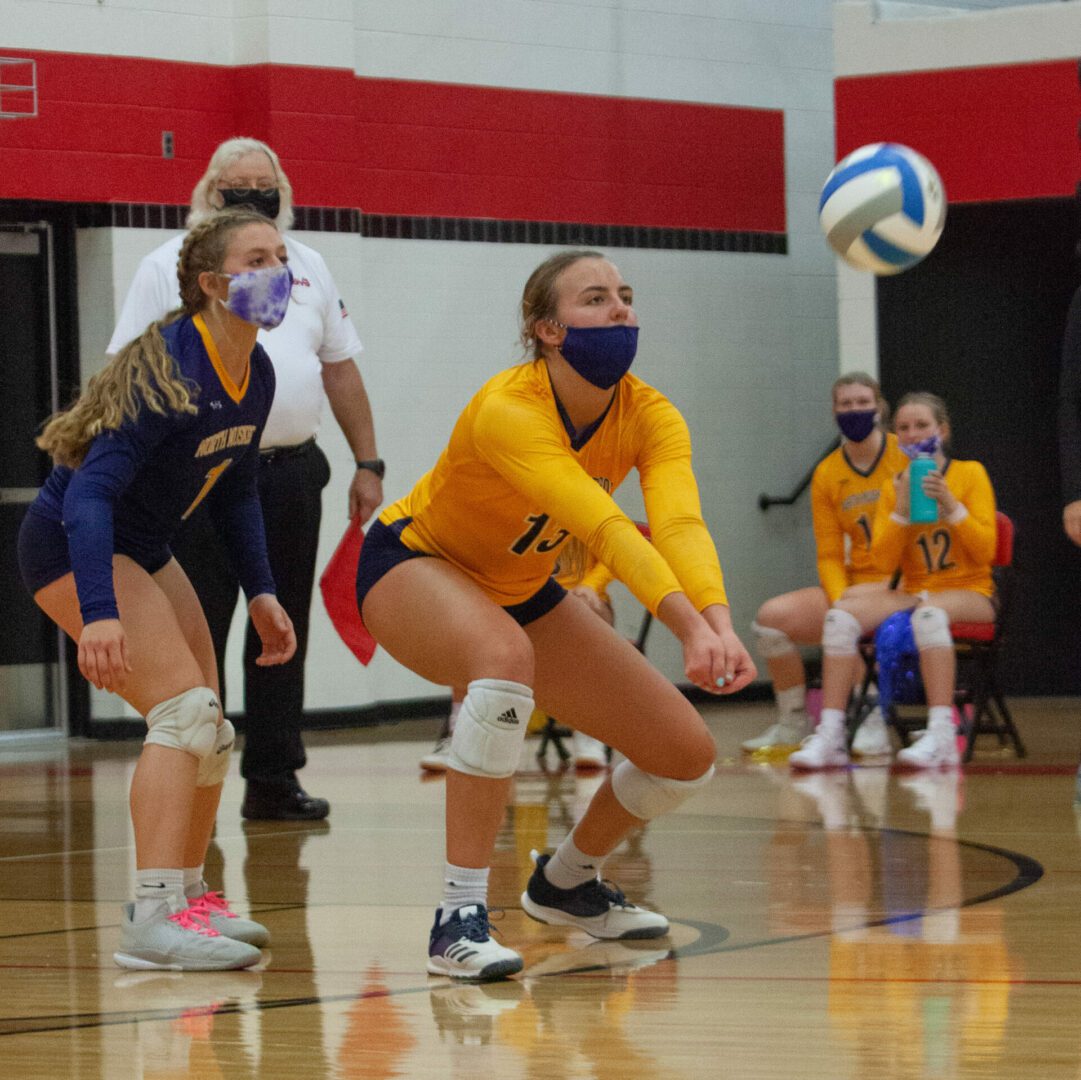 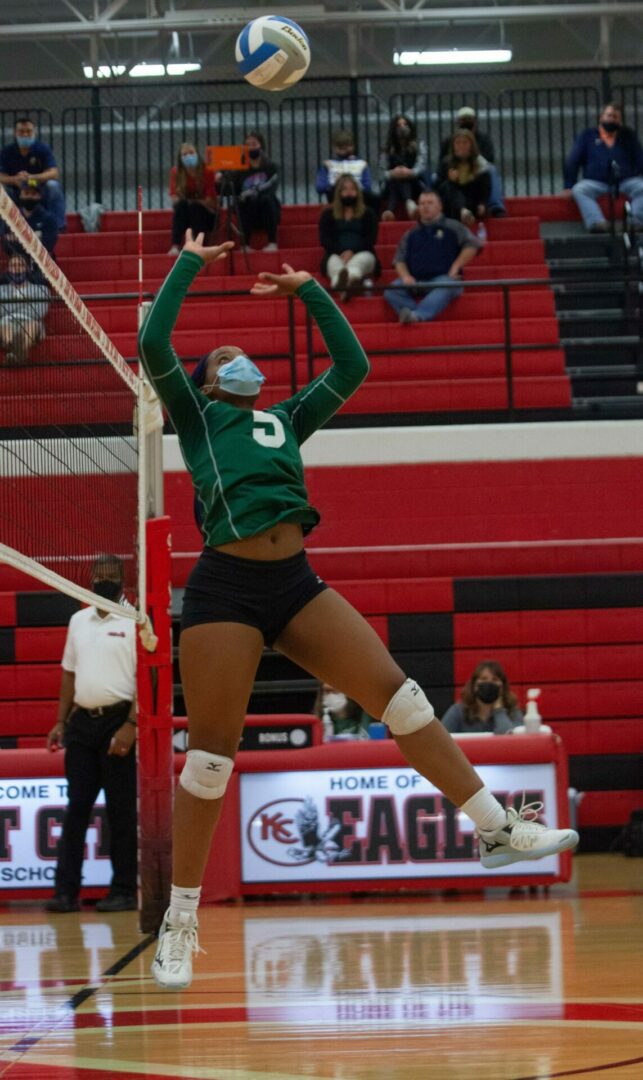 Taylor Folkema sends a shot in the opposite direction for a WMC point. Photo/Jason Goorman

Syann Fairfield goes up to spike the ball for North Muskegon. Photo/Jason Goorman 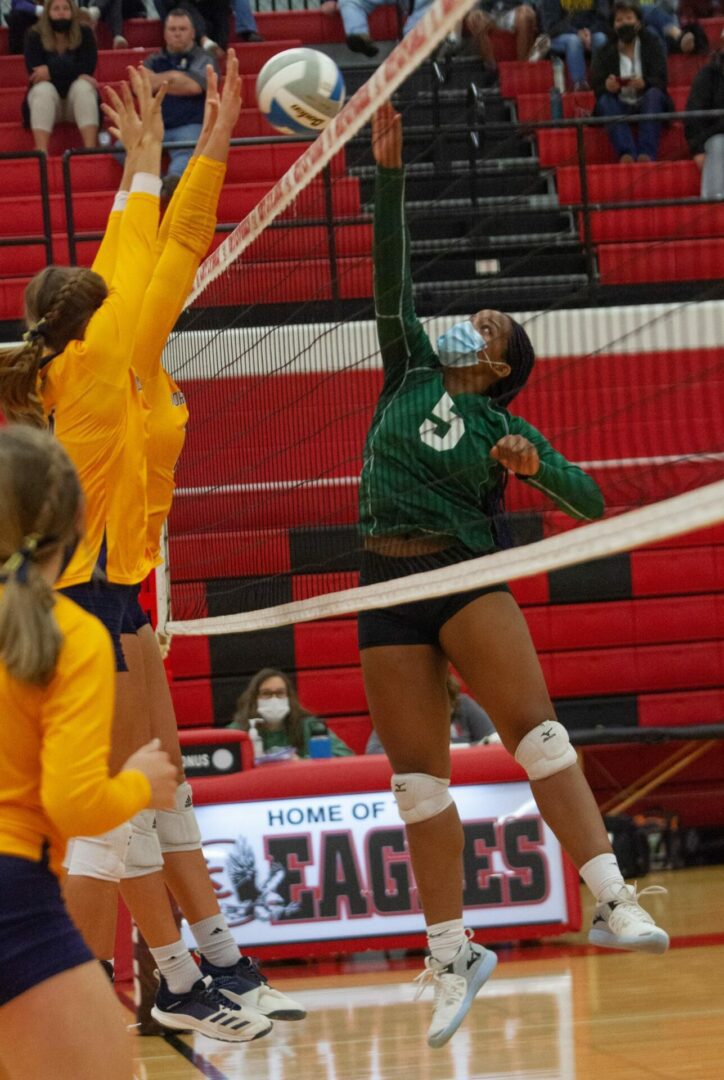 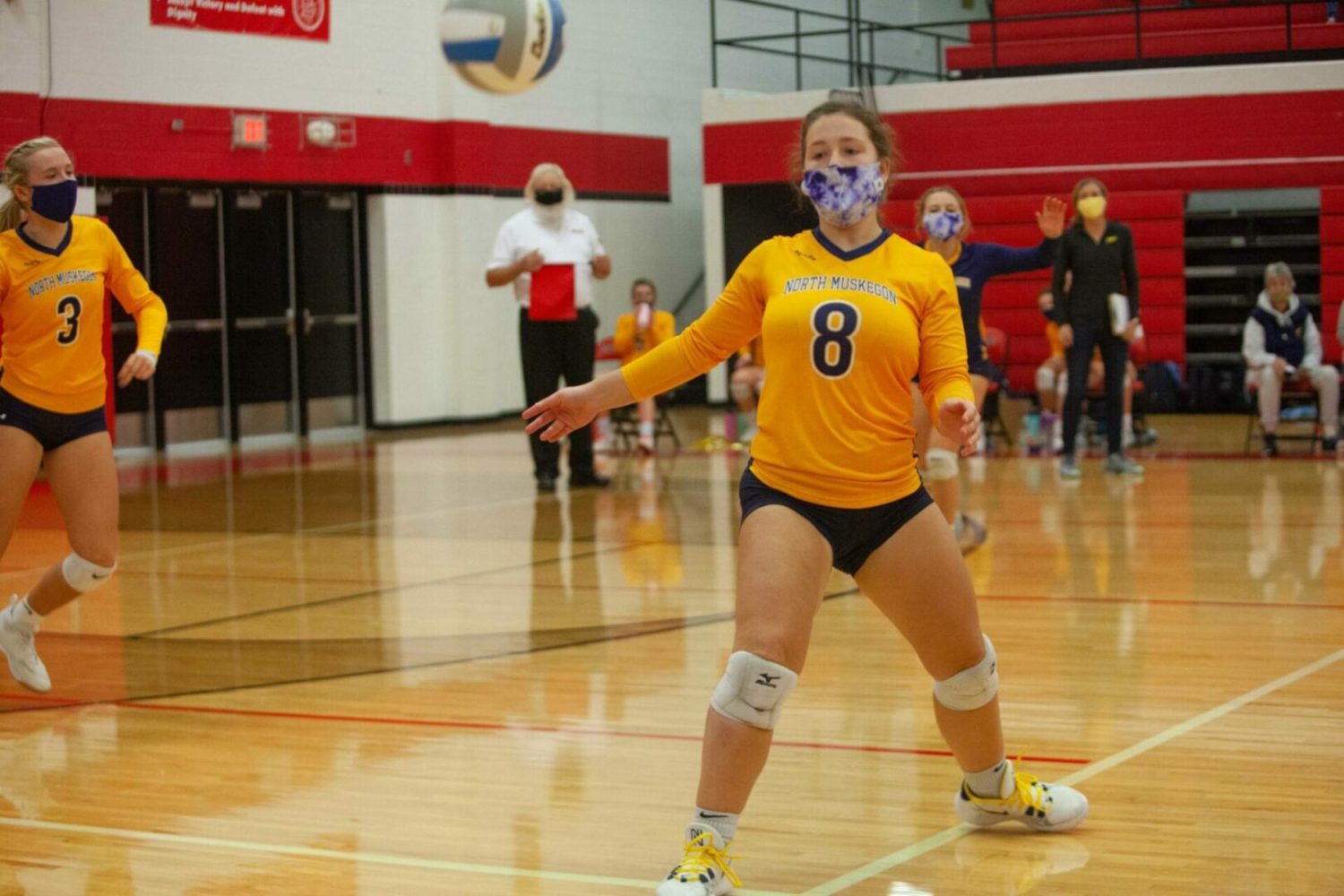 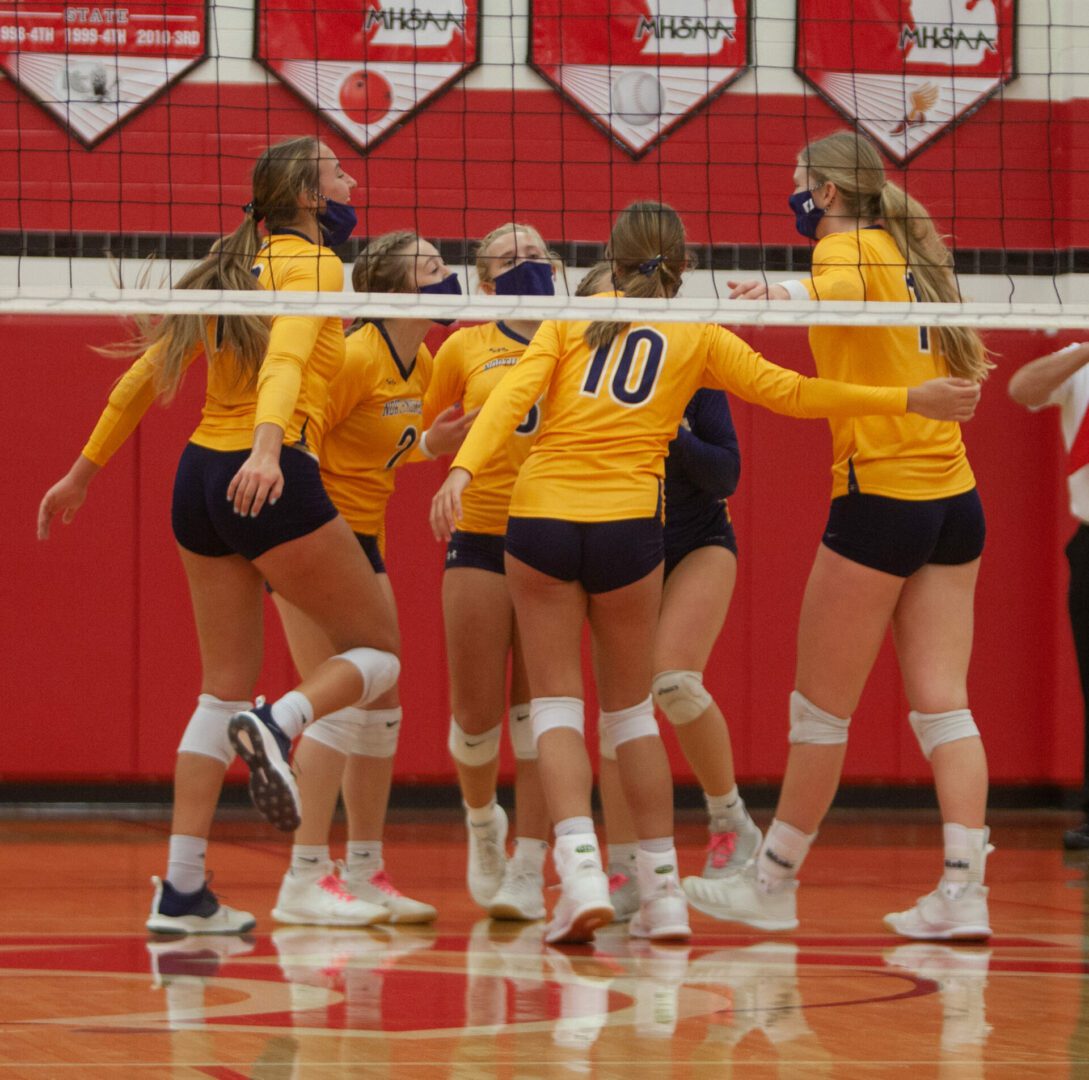 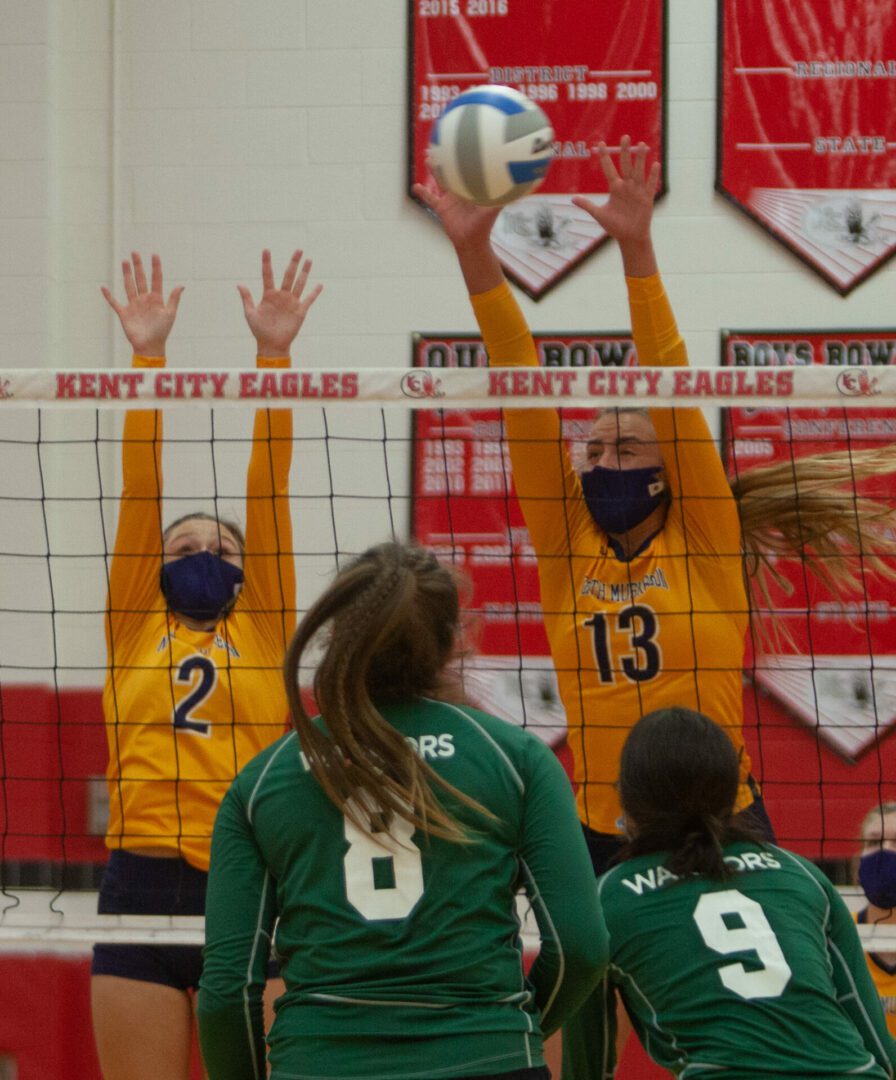 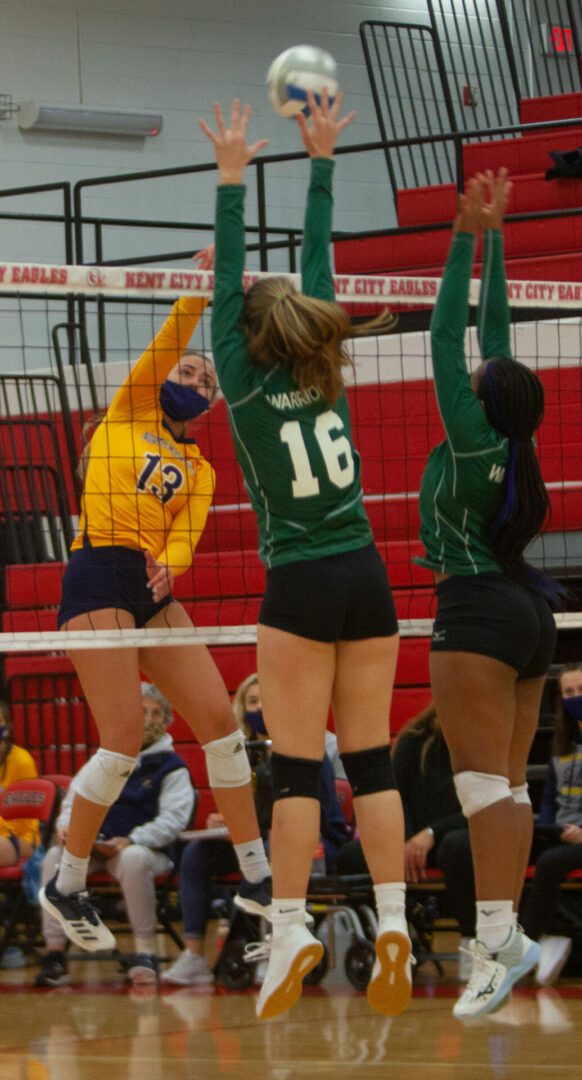 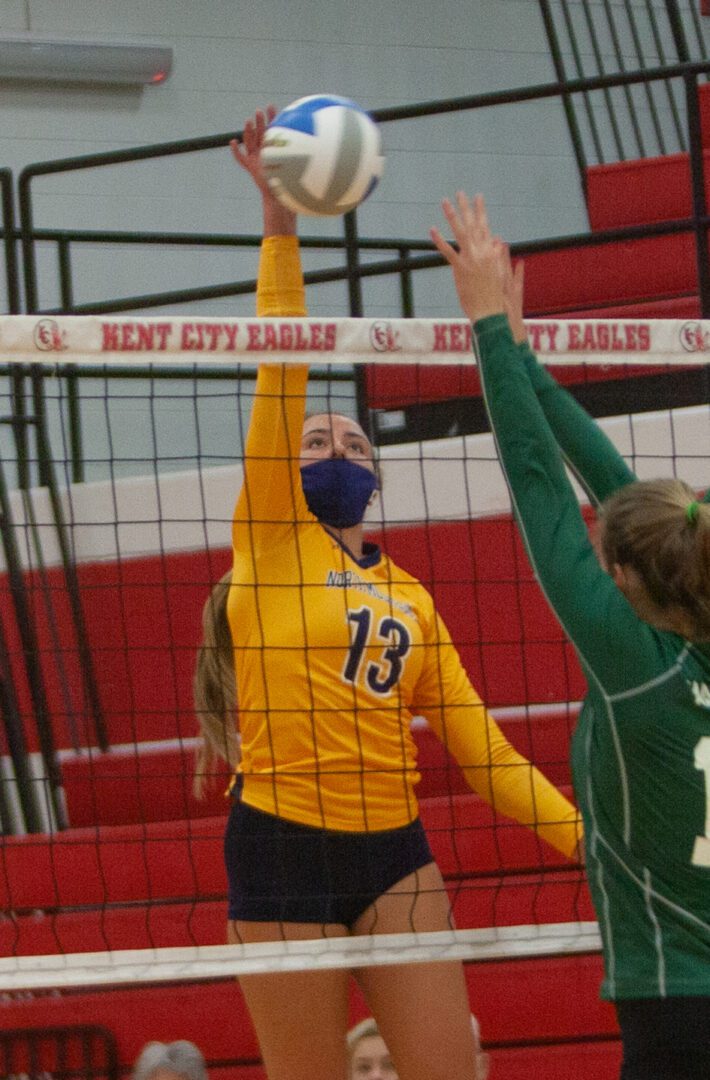