MUSKEGON — In a battle of local small school powers, Montague showed why it’s ranked No. 1 in the state.

The Wildcats were in control throughout Friday’s Division 6 district final on the road against No. 2 ranked Muskegon Catholic Central, and came away with a convincing 36-7 win. 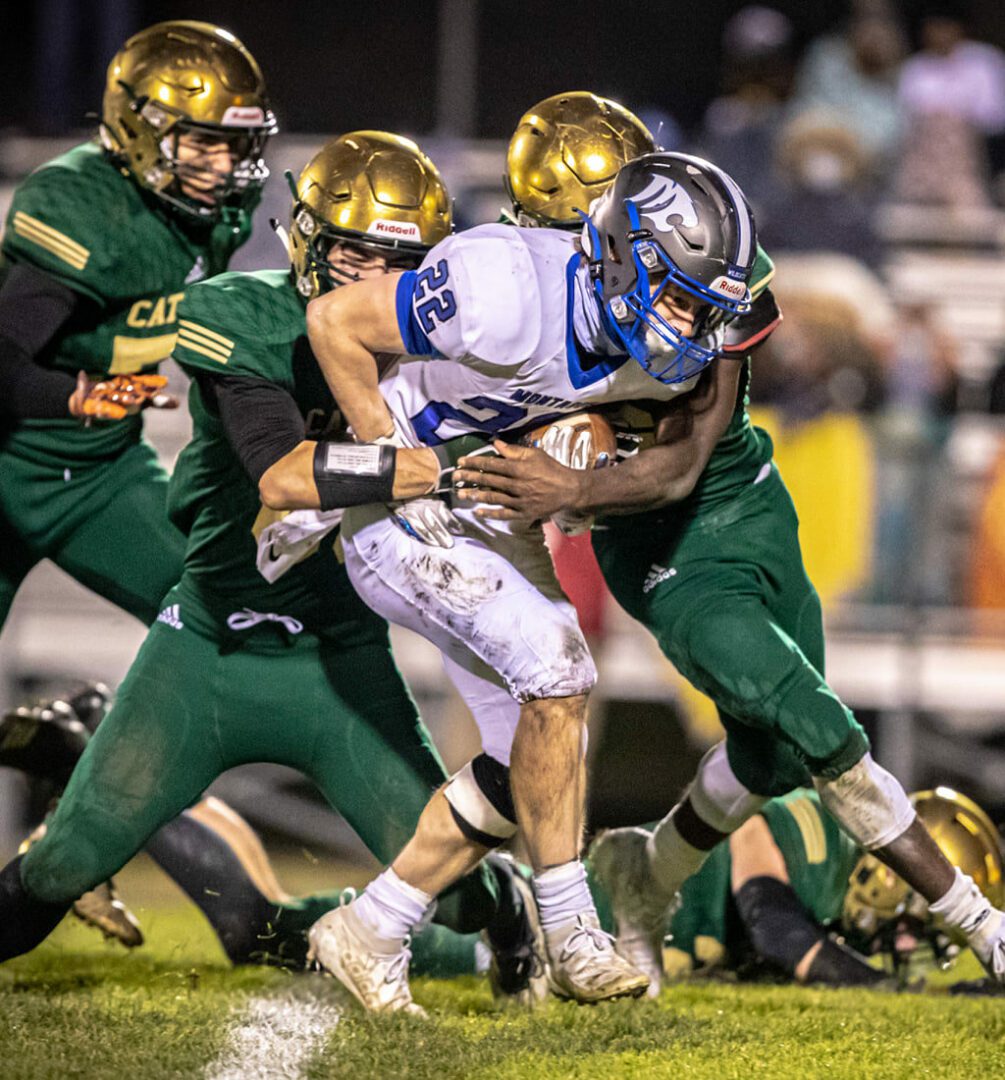 “I thought it was a battle,” said Montague coach Pat Collins, whose team won its fourth straight district championship. “We have high respect for Muskegon Catholic’s program. You can be seven points better than a team per quarter, and there are four quarters – seven’s not a lot.

“But we were consistent in our attack and that’s why we had such a difference in the score. Overall, I thought it was a close matchup.”

Senior quarterback Drew Collins once again led the charge, rushing for 124 yards and three touchdowns and completing 17-of-25 passes for 186 yards and two more scores.

Montague will be back home next week for a regional matchup against Montrose (8-1), which beat Millington 40-35 Friday night.

The Muskegon Catholic offense was without star quarterback Max Price, who missed the game with an injury suffered last week.

MCC ends the season 8-1, the most wins for the program since 2017, despite the shortened season this year.

The Wildcats managed to score five touchdowns against an MCC defense that had allowed just 18 points all season, and had posted five consecutive shutouts. Montague’s size advantage up front provided a boost for the Wildcats on both sides of the ball. 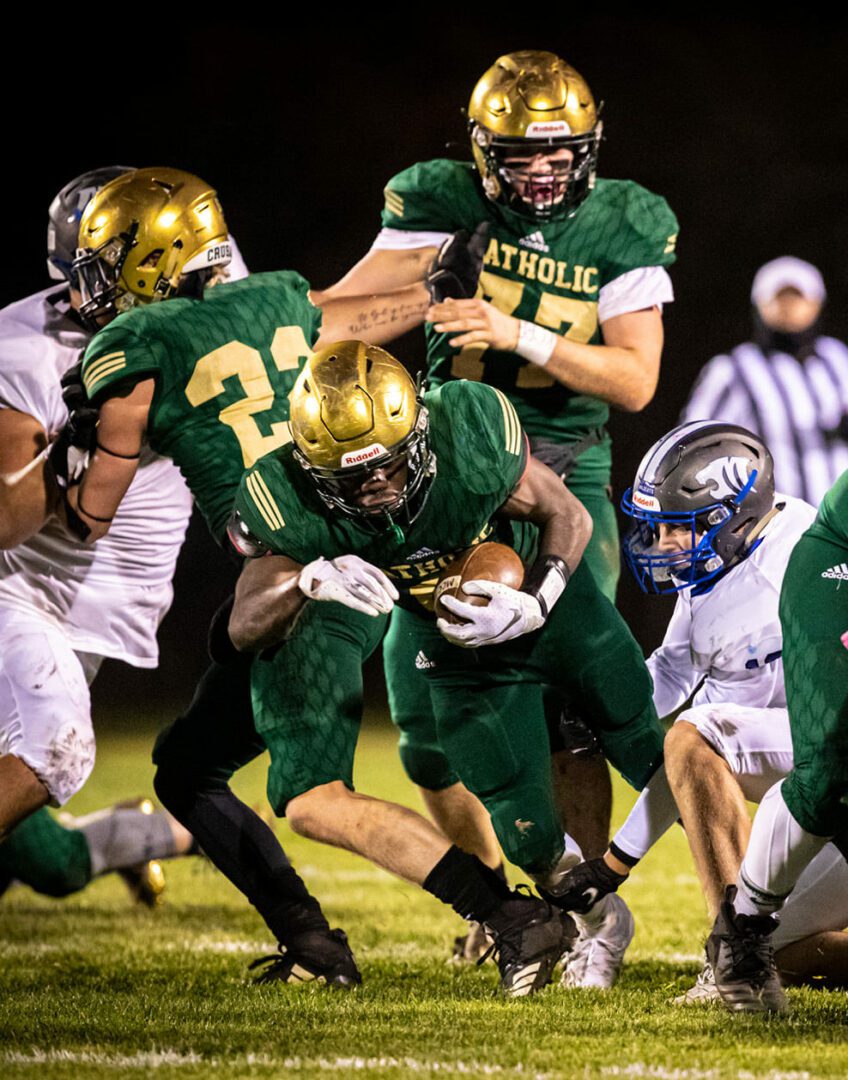 Joe Waller finds a hole up the middle for MCC from blocks from No. 77 Jaden Johnson and No. 22 Sam Convertini. Photo/Tim Reilly

“It’s huge, no pun intended,” Coach Collins said. “We have some big guys. Their guys battled well, played low and gave us a challenge. But if you make a small mistake and you’re a little smaller team, it could lead to a big gain. Our size was the difference.”

Montague scored on its first drive with a three-yard touchdown run by Collins to make it 7-0.

The Crusaders drove inside the Montague 20-yard-line early in the second quarter, but a fourth down pass was intercepted in the end zone by Owen Petersen.

Collins added a second touchdown, this one from a yard out, with 5:31 to play in the second quarter to make it 14-0, which was the halftime score.

The Wildcats struck first in the second half when Collins found Dylan Everett for a 19-yard touchdown pass.

Drew Collins hauled in an interception on defense on the ensuing drive, then scored four plays later on a 27-yard touchdown run. A two-point conversion pass from Collins to kicker Andrew Kooi on a fake PAT play made it 29-0 with 1:21 left in third.

Collins collected his fifth touchdown of the night with a 21-yard pass to Sam Smith, who made a diving catch in the end zone, making the score 36-0 early in the fourth.

The Crusaders got on the board with 3:33 to play on a one-yard touchdown run from Joe Waller to make the final score 36-7.

Kartes led the defense with nine tackles, while Powell and Sam Kartes had six apiece. Waller recovered a fumble for MCC. 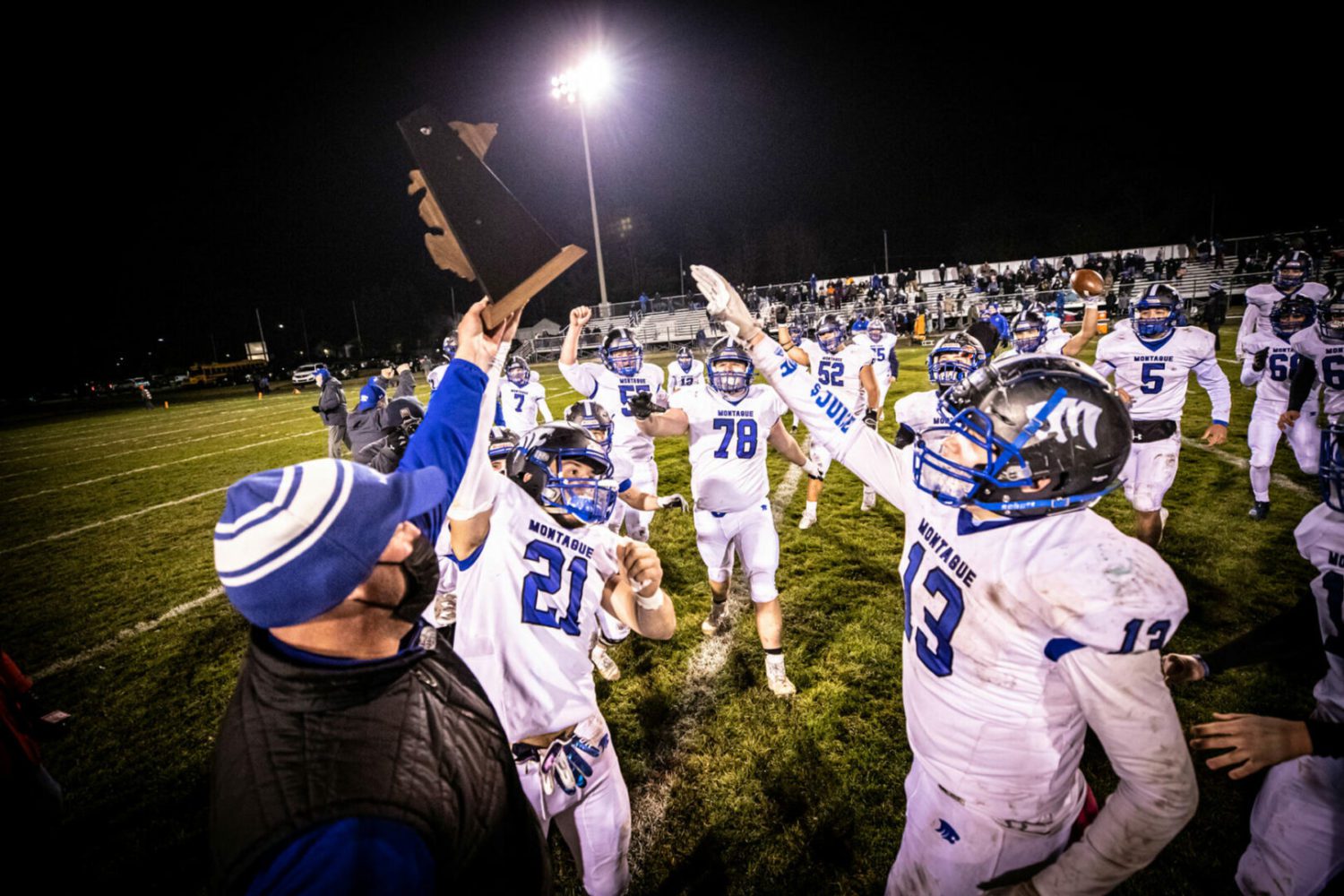 Montague Coach Pat Collins hands the district title trophy to No. 22 Dylan Everett and the rest of the Wildcats team. Photo/Tim Reilly 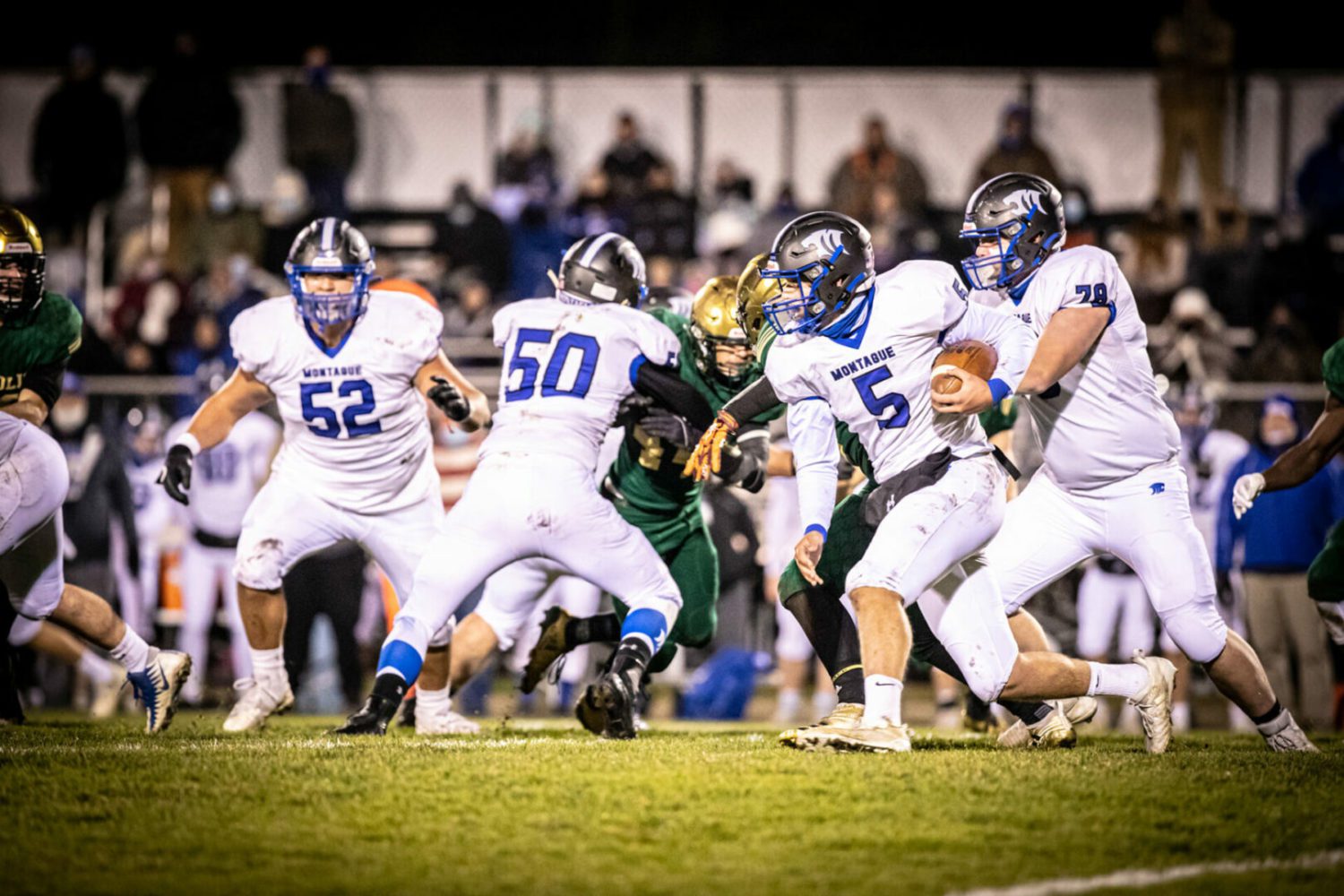 Montague QB No. 5 Drew Collins rushes the ball getting a block from No. 50 Alec Waruszewski. Photo/Tim Reilly 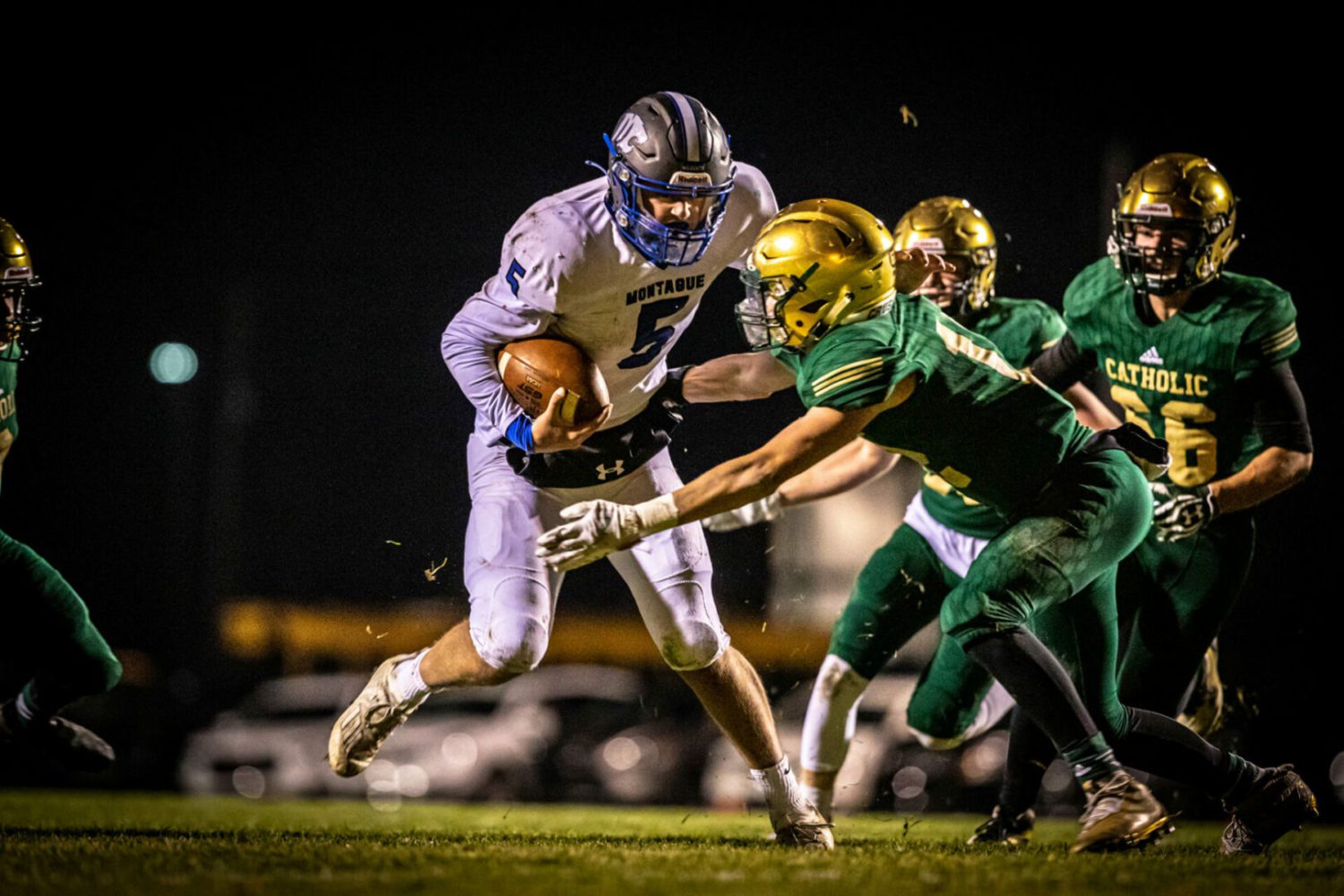 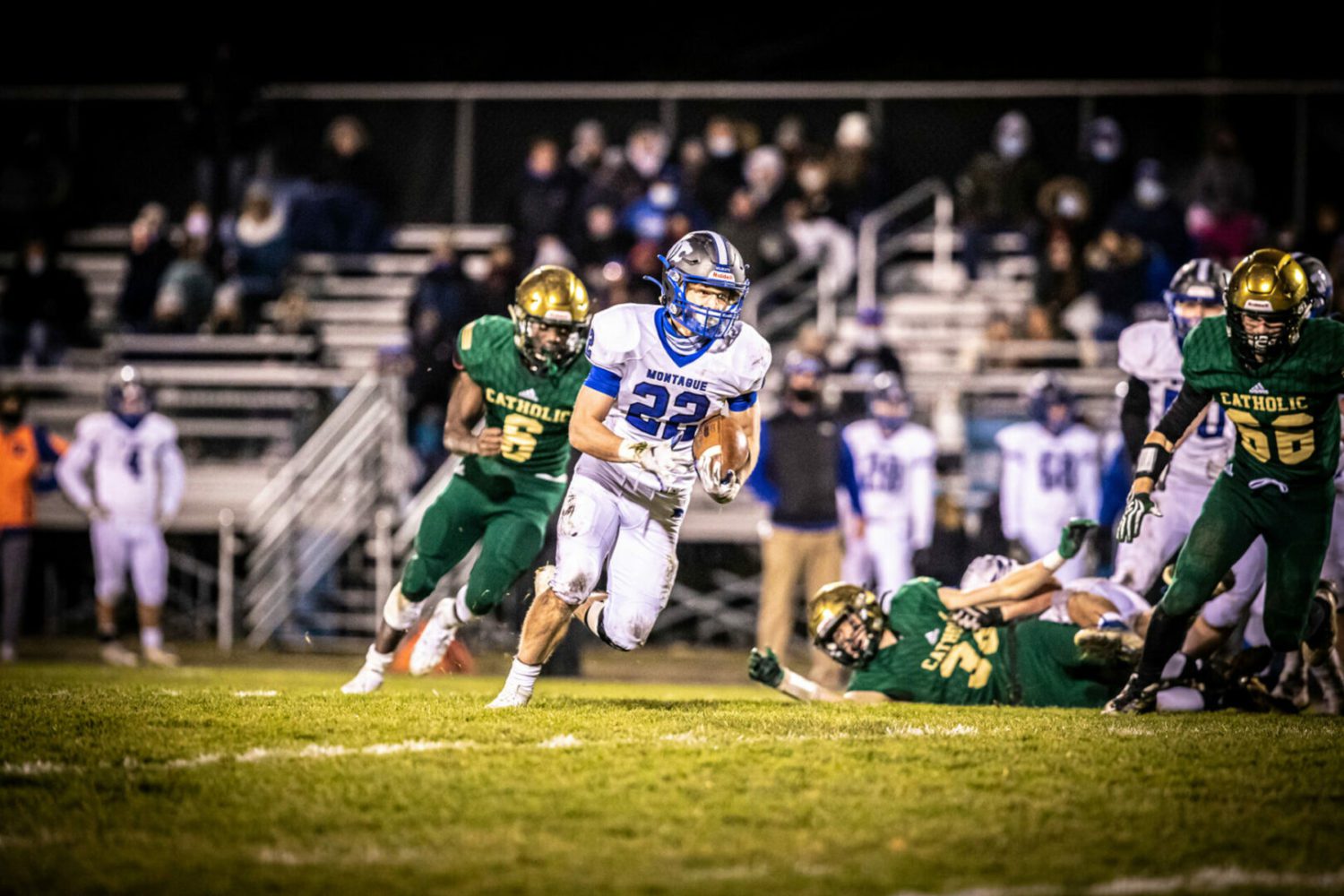 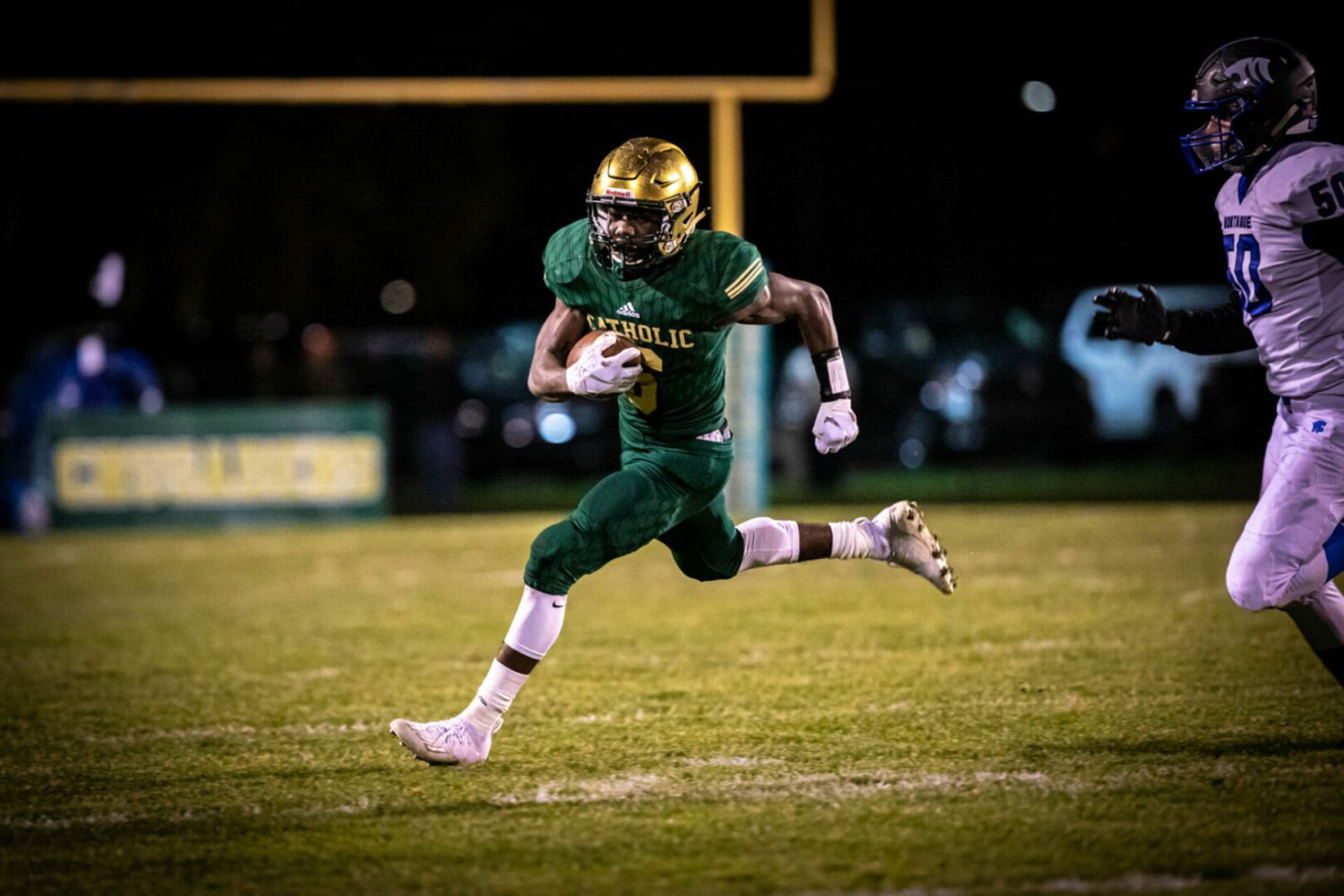 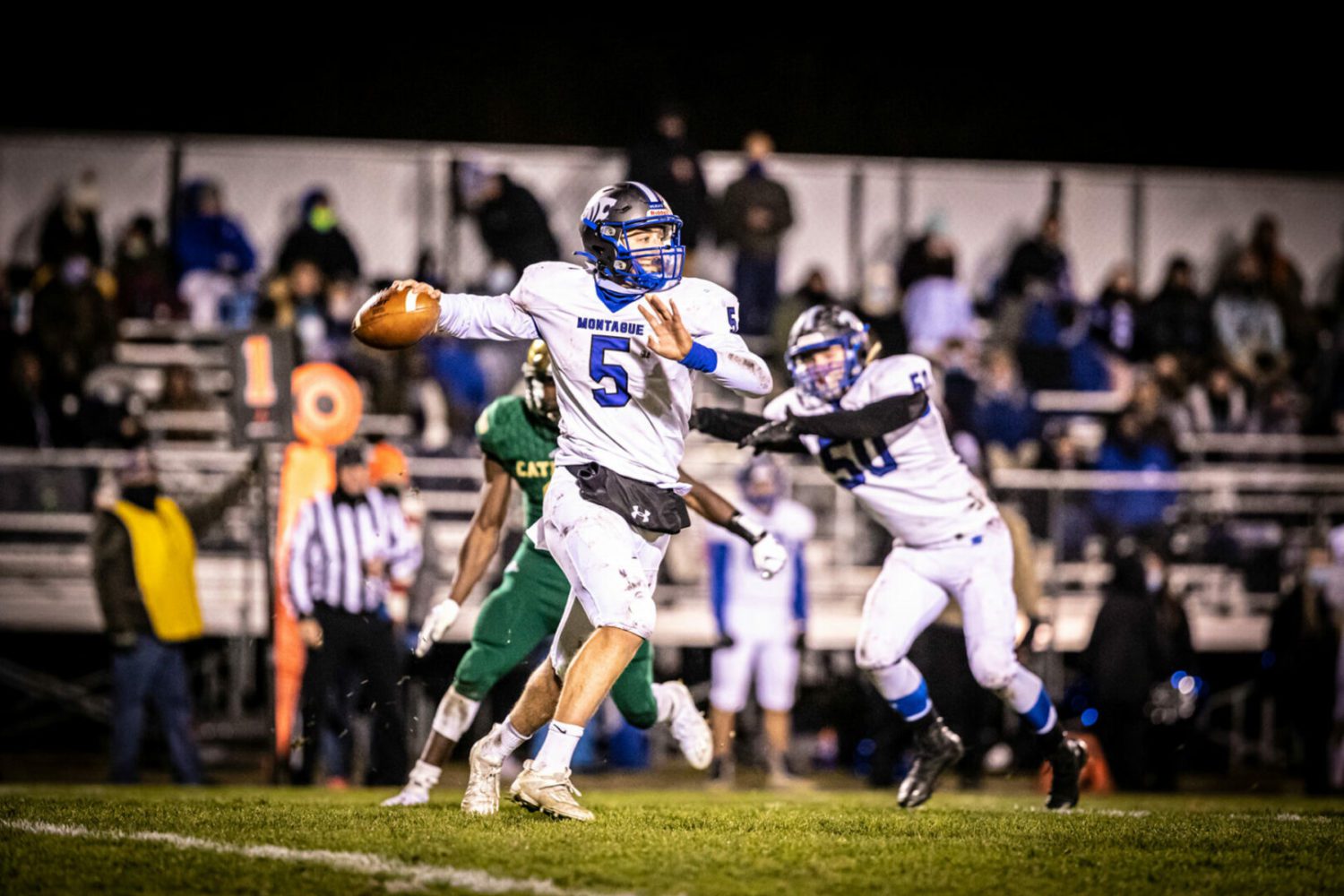 Drew Collins drops back to make a pass from Montague. Photo/Tim Reilly