MUSKEGON – One of the reasons the Muskegon Lumberjacks opted to play this season, rather than take the year off that was offered by the

league, was because they expected to have a very good team.

That has turned out to be the case, particularly in December, when the Jacks have won all but two games. What’s particularly impressive is that they have been cutting through the opposition while playing all of their games on the road, with the long, tiring bus trips and weekend stays in hotel rooms.

Now, after 10 games and nearly two months of the season, the Lumberjacks are finally getting a chance to play on their home ice. They will host the Chicago Steel twice this weekend, on Friday and Saturday night, at Mercy Health Arena in Muskegon. Game time both nights is 7:10 p.m.

LocalSportsJournal.com will be on hand to cover both games, and every other home game this season.

The two-game series will be an early-season showdown between two top contenders. The Lumberjacks are tied for second place in the USHL’s Eastern Conferenced with a 6-3-1 record, and are five points behind first-place Chicago. A pair of wins this weekend would put the local team on the doorstep of taking the conference lead. 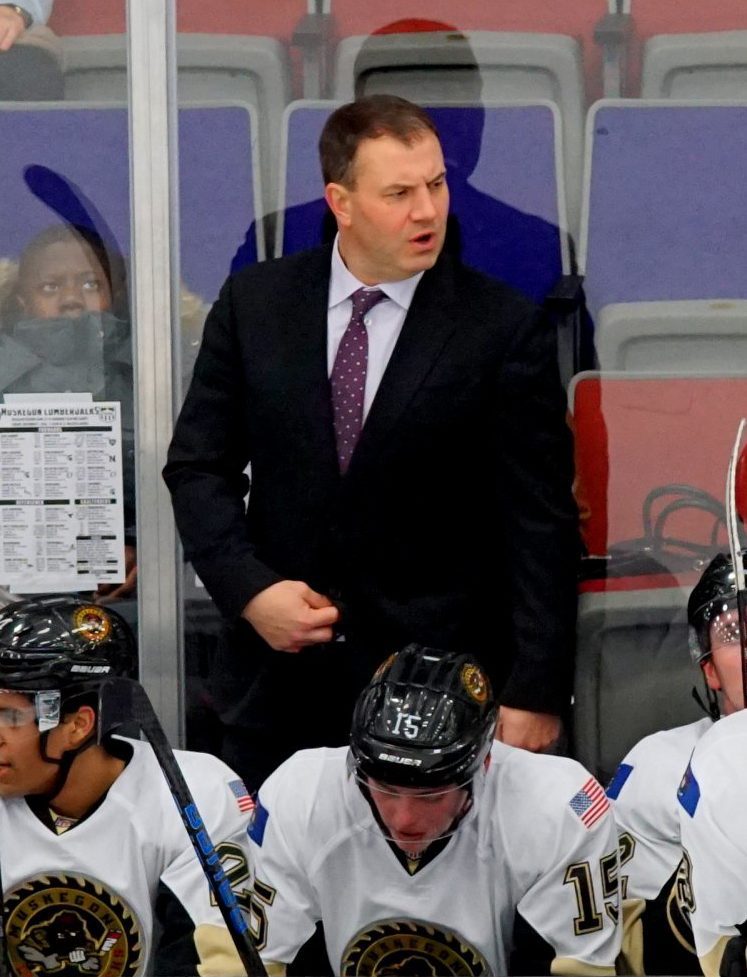 The Jacks were originally supposed to open at home on Thanksgiving weekend, but those two games were pushed back to later in the season, in the hope that the club might be able to sell tickets and welcome back at least some fans by this weekend.

Unfortunately that’s not the case, due to Gov. Whitmer’s latest COVID-19 restrictions, so no tickets will be sold. The Jacks would much rather come home after their extended road trip to the sights and sounds of fans in the stands, but even without that, they are happy to be coming home.

“It’s obviously exciting to get home and sleep in our own beds for once,” said Mike Hamilton, the Lumberjacks’ third-year coach. “Our last home game was in March. It will be really exciting to have the guys play in our own arena and not be on the bus.

“Our crowd (at home games) provides one of the better atmospheres in the league, and that’s something we will miss, but at the end of the day we’re one of the few junior leagues in the world that is playing this season. We’re just happy to be playing. In a year like 2020, we will take whatever is given.”

The Lumberjacks got off to a so-so start in November, posting a 2-2 record in four games, between the opener on Nov. 4 and a game on Nov. 22. They were scoring a lot of goals, which they expected to do with several top offensive players returning from last season, but they were also giving up more than their share.

In late November they had four straight games cancelled due to COVID concerns on opposing squads, and did nothing but practice for nearly two weeks. 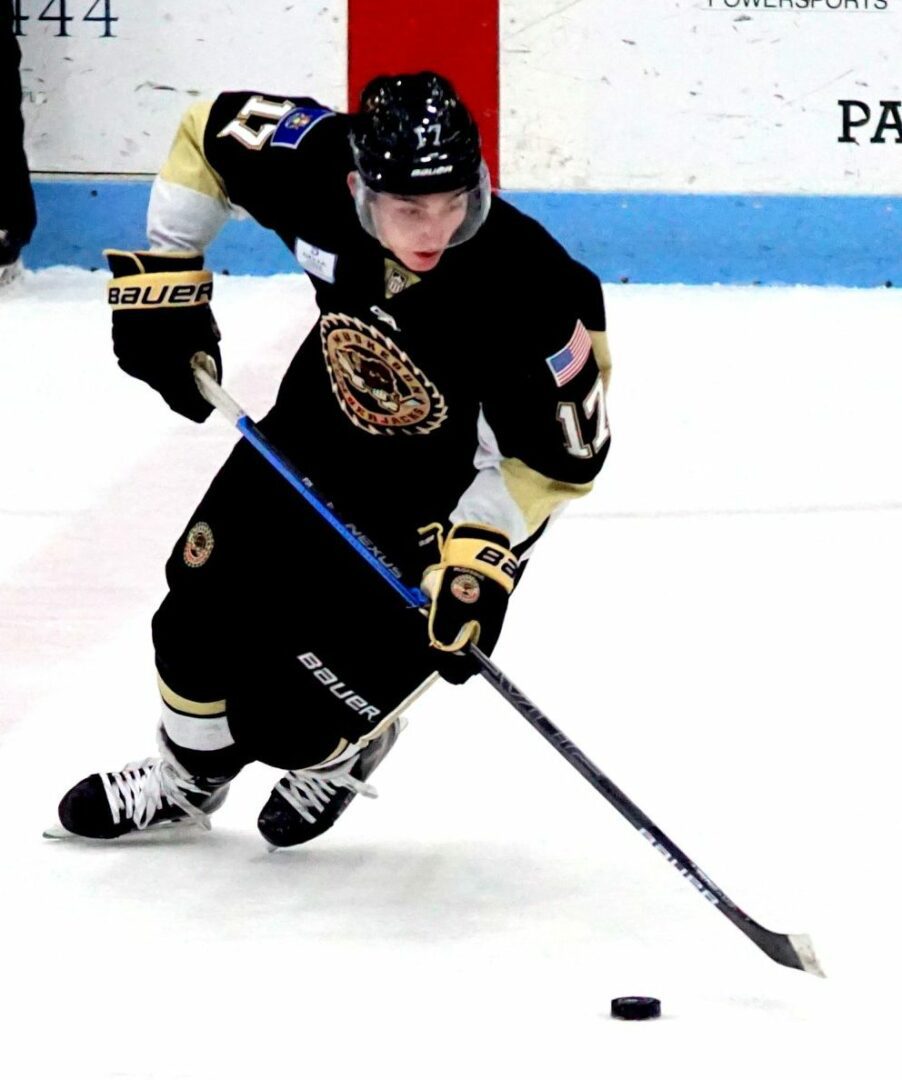 The lack of game activity was concerning for Hamilton, but the break turned out to be a blessing in disguise. The Jacks returned to the ice on Dec. 4 and posted a 3-1 win over Youngstown, then proceeded to win three out of their next five games.

“We were not happy about it, but in hindsight it was probably a really good time for us to have a break and refocus,” Hamilton said.  “We had two weeks to dial some things in and come back. We learned from some things and made ourselves better.”

The highlight of December so far was a three-game sweep in Dubuque over the Fighting Saints last weekend. That winning streak was broken in a 9-3 loss to Team USA on Wednesday.

“It’s one of those things that you wonder if it will ever happen again, going to Dubuque and winning three in a row,” Hamilton said. “It’s a tough place to play. I’m really happy and proud of our guys for that.”

The coach gives a lot of credit for the sweep, and the team’s recent success, to goalies Christian Stroever and Jan Skorpik, who had some rough games earlier in the season, and again on Wednesday night, but have been much steadier overall as the season has progressed.

“It has started with goaltending,” Hamilton said. “Our goalies have seemed to settle in, and they’ve been the difference. They have been really good. Everyone is starting to figure things out. We are starting to keep the game in front of us and eliminate odd-man rushes against us. Early on we were just trying to outscore teams. It was fun to watch but not to coach. We’ve been much more sound defensively.” 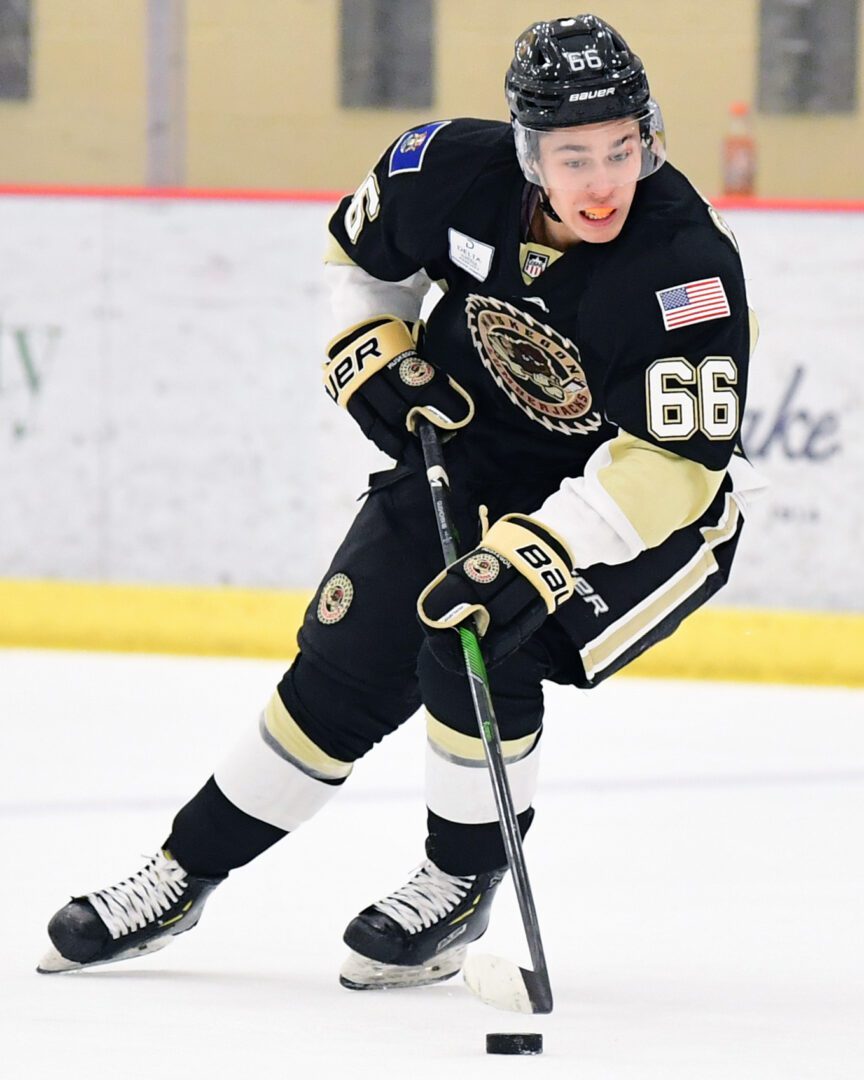 The Lumberjacks expected to have a high-powered offense this season, and that’s certainly been the case. They will enter their weekend home games with 50 goals, which is second in the league behind Chicago.

The top scorer has been forward Cam Berg, who was acquired in a mid-season trade last year and has been getting goals in bunches ever since. He currently has 11 goals and five assists for 16 points. He is tied for the league lead in goals with Chicago’s Matt Coronato, and is fourth in overall points (goals plus assists) in the USHL.

One guy who was counted on to be a big scorer this season, forward Rhett Pitlick, missed three games due to a shoulder injury, but he’s back and is starting to produce. He scored his first two goals of the season last Saturday against Dubuque, then scored again on Wednesday against Team USA.

“Pitlick was injured early, after only playing four games,” Hamilton said. “He scored his first two goals on Saturday, which was probably his best game since he’s been back. He was out early and is probably a good month behind the rest of the team, but we expect him to be taking off.

“Scoring goals should not be an issue for this team. We’ve got a lot of firepower and a lot of good complementary players.”

The challenge has been stopping other teams from scoring. They are second in the league in goals allowed with 50, a stat that was inflated greatly when they gave up nine goals against Team USA on Wednesday.

Hamilton admits the defensemen are less experienced than the forwards, but says overall team defense has been the issue.

“That’s not a stat we are proud of,” Hamilton said about giving up 50 goals so far. “We are a little young on the blue line, but we made some (personnel) moves in the last few weeks that have definitely helped us out.

“We have some forwards who like to cheat a little bit (and not stay back to help the defense). We’re looking to create more support for our young defenseman. It’s a team defense problem, not a defensemen problem. But for three weeks in a row we’ve been moving toward playing the game the right way.”