After several close calls in the playoffs and the long break, Mona Shores set to continue bid for a repeat state title

For much of the season, the Mona Shores football team has looked dominant, and very resourceful, in its quest for a second consecutive Division 2 state title.

The Sailors have left fans and opponents wondering if they could be stopped.

Only COVID has gotten the better of the Sailors so far. Shortly after their tough 43-35 win over Caledonia in the district finals in mid-November, the MHSAA football playoffs were put on hold, leaving countless “what ifs” for the teams remaining in the state title hunt.

But now, after several rounds of hopeful restart dates and further postponements, the Sailors finally have the next stop on their drive back to Ford Field in sight – a trip to East Lansing on Saturday to face the 8-0 Trojans in a Division 2 regional championship game. 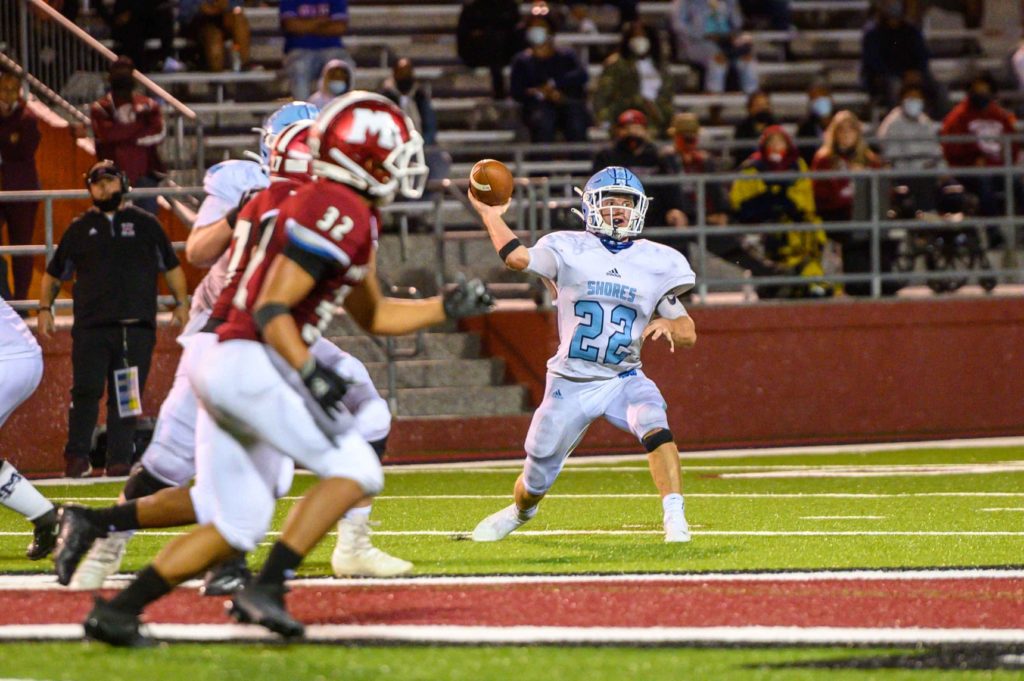 “To be honest, at first I was very skeptical,” said Mona Shores head coach Matt Koziak about the latest plan to restart the season. “But just to be able to be back out with the kids and the coaches again is incredible. If you think about it, those teams that lost (in the playoffs) had some closure. The teams that are still in, when we took that five-week pause, there was no closure.

“You’re with these kids since August, and all of a sudden that’s taken away. It creates a huge void, not having an ending, and you don’t know what’s going to happen. So to be able to finish, win or lose, that’s incredible.

“The biggest key is going to be how kids respond to the game with that long break. It’s almost like a Week 1 game. We’ll see which kids can come out and make the least mistakes with penalties and turnovers and giving up big plays.”

One concern for coaches after the pause was the potential for players to opt out of the remainder of the season, to enroll early in college, work a part-time job, focus on another sport, or for a number of other reasons.

Koziak said that has been the case with some players at Mona Shores, but the “main core group” for the Sailors will all be suited up come Saturday.

Of course leading that core group is Brady Rose. The senior quarterback, who also serves as a safety, punter, punt returner and extra point holder, has already won multiple statewide honors this season for his amazing performance. 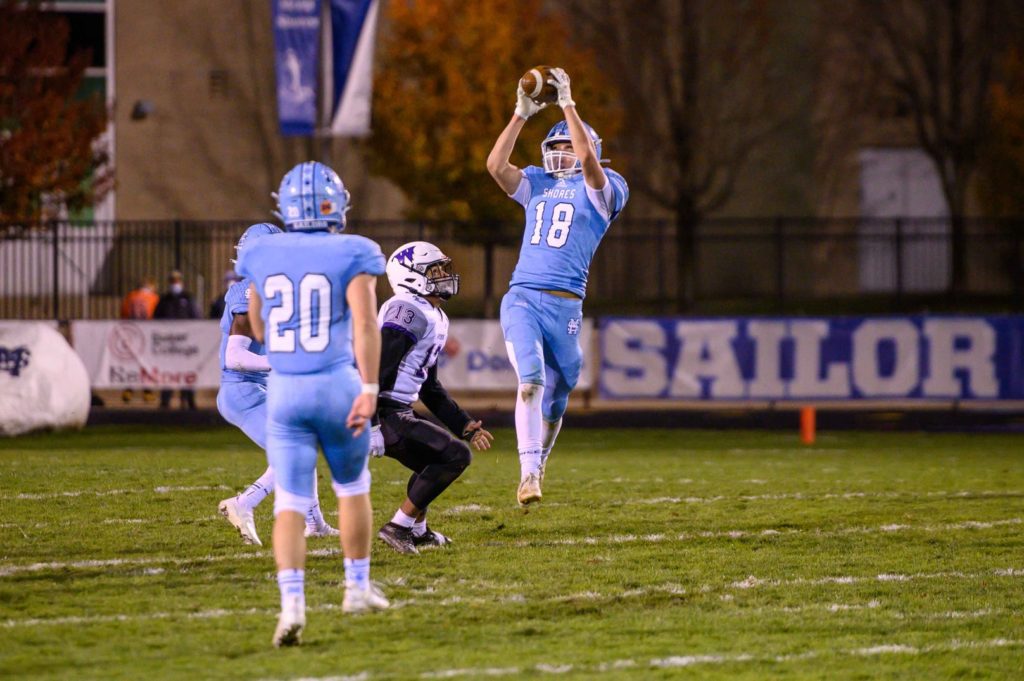 Rose has passed for 935 yards with 10 touchdowns and one interception, ran for 849 yards and 15 scores, caught two passes for 81 yards and a TD, is tied for the team lead with 55 tackles on defense, and has snagged four interceptions, forced a fumble, recovered a fumble, returned a punt for a touchdown and averaged 36 yards per punt.

“Especially after a layoff, to have a guy like Brady come back and be our trigger man, we’re very blessed,” Koziak said. “What makes him so great for us, he touches the ball every play. Whether he keeps it, hands it off or throws it, he’s making plays. Obviously as our free safety he does a tremendous job, too. But he’ll be the first to tell you he can’t do it by himself.”

The Sailors surround Rose with plenty of weapons offensively. Elijah Johnson has rushed for 697 yards and 10 scores this year, Dahmir Farnum has 379 yards and four TDs, and Elijah Farnum has totaled 316 yards and three scores on the ground.

Elijah Farnum leads the team in receiving with 21 catches, good for 382 yards and five TDs. Senior Gary Humphrey III has 384 receiving yards on 18 catches, with three going for scores.

On defense, DJ Caviness had 55 tackles and 2.5 sacks this year while Karsen Marihugh has 34 tackles and three sacks. Humphrey has picked of a pair of passes and has 33 tackles. Jeff Lenartowicz (41 tackles) and Khyree Hamel (34) are also key contributors on defense.

Koziak said the team will rely on several seniors to continue to have big impacts on the field, even if they don’t show up as much on the stat sheet. He said players like Keondre Pierce, an outstanding perimeter blocker who springs a lot of big plays, along with linemen Bryce Sikkenga and Mason Klos, fit that description. 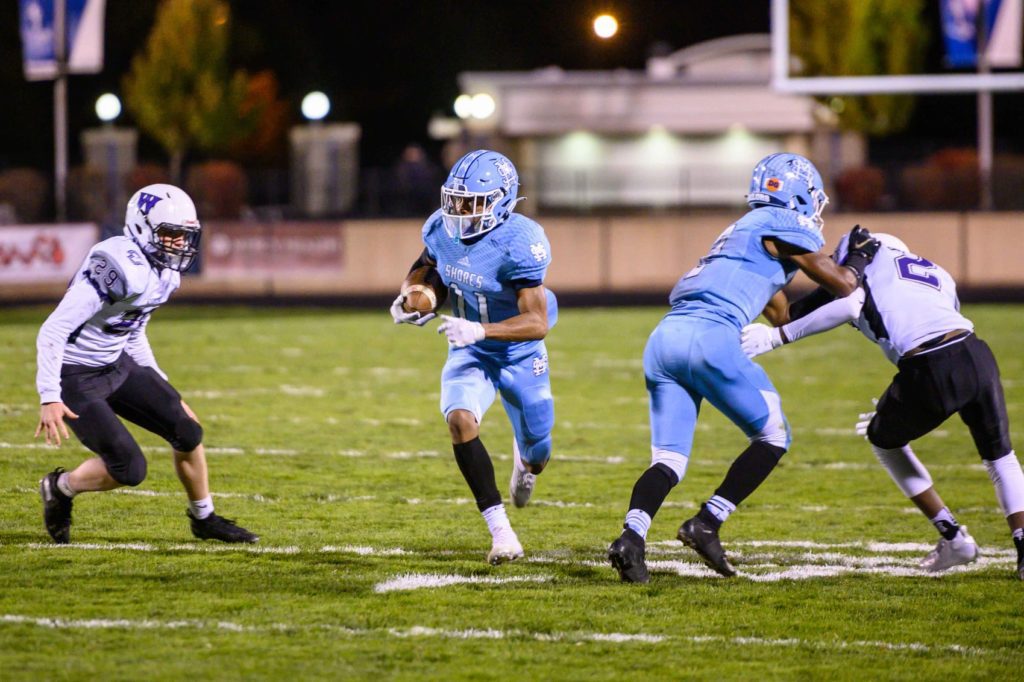 Elijah Farnum finds a hole for the Sailors. Photo/Eric Sturr

The Sailors racked up a perfect 6-0 record in the regular season, cruising through the majority of their games. They had one very tough challenge, playing rival Muskegon in newly-renovated Hackley Stadium in the first game on the artificial turf, and came away with a breathtaking 21-14 win.

In that game, Rose threw for two touchdowns, ran for the go-ahead score late in the fourth, recorded 10 tackles and sealed the win with an interception with 28 seconds to play.

In Week 6, due to a COVID-19 cancellation, the Sailors hurriedly scheduled a rematch of last year’s state championship game against Detroit Martin Luther King. Defying the statewide pregame hype, Mona Shores controlled the game throughout before allowing a couple of late scores in a 35-21 win.

Mona Shores has had a few scares in the playoffs, but calmly found a way to win each time.

The second-round playoff game against Forest Hills Central was one example. A pair of first half turnovers left Mona Shores down 10-7 at the half, the first time the team had trailed all season. The Rangers then returned the opening kick of the second half for a touchdown to make it 17-7.

But Mona Shores rattled off 21 unanswered points in response, taking a 28-17 lead with just 1:45 to play after a Johnson touchdown. It seemed like the game was done, but FHC didn’t quit.

The Rangers quickly moved down the field and scored a touchdown with 23 seconds left, then tacked on a two-point conversion to make it 28-25. 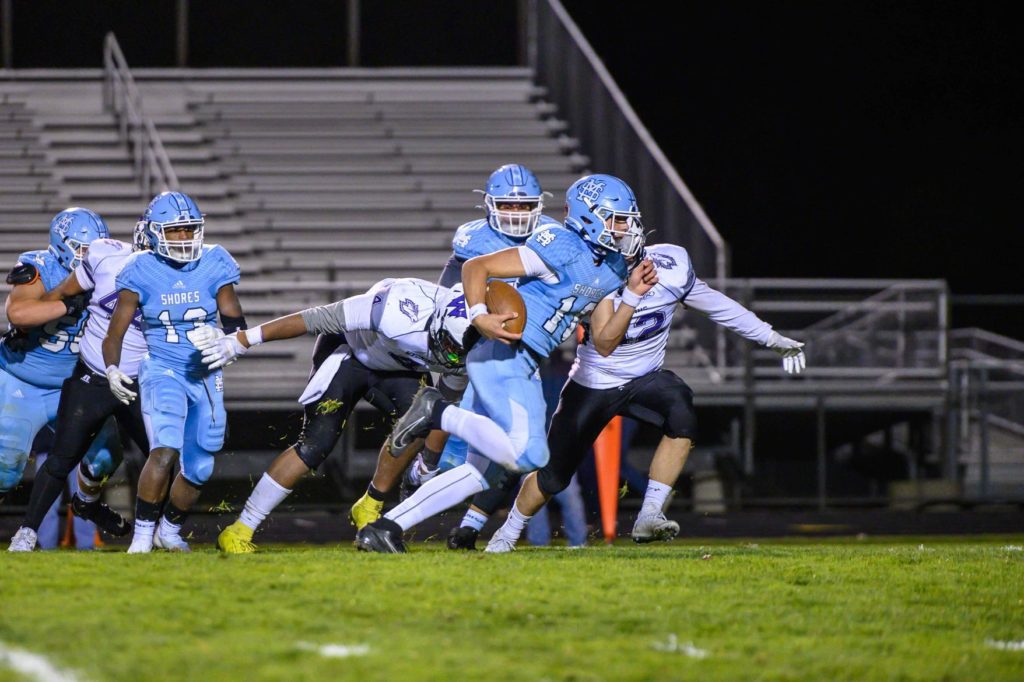 The Sailors failed to recover the ensuing onside kick, leaving FHC with a glimmer of hope.

With nine seconds left and the ball on the Sailor 27-yard-line, the Rangers went for the win instead of a potential game-tying field goal. They completed a deep pass, but a pair of Sailor defenders stopped the receiver on the one-yard-line to preserve the win – and the season.

The Sailors had another nail-bitter in the district final against a 4-4 Caledonia team that achieved a pair of playoff upsets to reach the third round. Mona Shores led 21-7 early, but the Fighting Scots rallied to tie the game heading into the half.

The teams traded blows in the second half, but Mona Shores landed the last punch to survive with a 43-35 win.

Now the Sailors will be facing 8-0 East Lansing. The Trojans went 5-0 in the regular season following a season-opening forfeit win. One highlight was a victory over defending Division 3 state champion River Rouge. In Weeks 2-6 of the regular season, the Trojans outscored opponents 183-12 – an average score of 36.6 to 2.4.

After getting a bye in the first round of the playoffs, East Lansing dispatched Portage Central 49-6 and Portage Northern 42-14 to reach the regional finals.

“They’ve done a great job on both sides of the ball,” Koziak said of the Trojans. “Defensively they’re able to limit yards and points. Some credit goes to the staff obviously getting kids in the right spots, but you can tell the kids know where each other are going to be. They know their assignments, what they’re responsible for. That’s what makes them a great team, they’re very smart and well coached.”