MONTAGUE – You’ll often hear football teams talk about having a sense of brotherhood and family-like bonds.

For the Montague varsity football team, football is an actual family affair, and at least the first chapter of that story will wrap up on Friday when the 11-0 Wildcats play Clinton in the Division 6 state championship game at 4:30 p.m. at Detroit’s Ford Field. 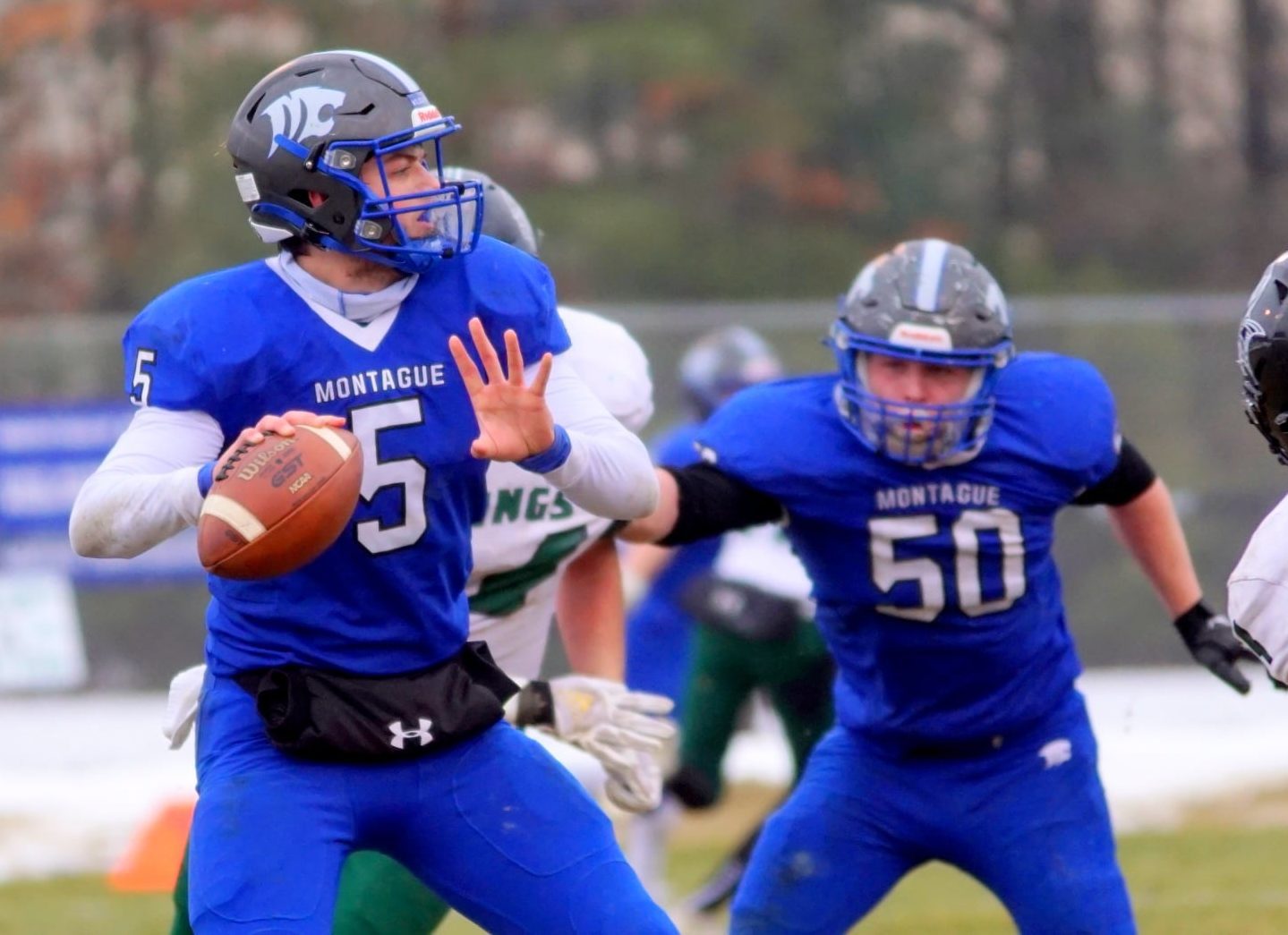 Drew Collins drops back to pass as No. 50 Alec Waruszewski watches. Photo/Leo Valdez

While the obvious bond between longtime head coach Pat Collins and senior quarterback Drew Collins is widely known, that isn’t the only Collins connection to the current Montague football squad.

Another beloved family member played a strong role in the development of most of the players, and he will be remembered when the team takes the field on Friday.

“My uncle kind of set the baseline,” said Drew Collins about Matt Collins, Pat’s brother, who passed in May of 2019 but coached most of the current Wildcat senior class in rocket football. “We all remember him as Coach Matt. He was really special to us and I can assure you that we’ll talk about what he taught us in pregame.”

Drew and his father’s time together on the football field also dates back to the youth league days.

“I helped out my brother,” said Pat Collins, who has a younger son coming up through the system, and could end up coaching him, as well. “I put in some time with Drew there, and then in middle school, I’d go down and talk to him, but wouldn’t really coach him.”

Pat took over the main responsibility of coaching his son when the quarterback joined the varsity as a sophomore in the 2018 season. He and the other coaches have obviously done something right, because Drew has become one of the most productive high school signal-callers in the state. 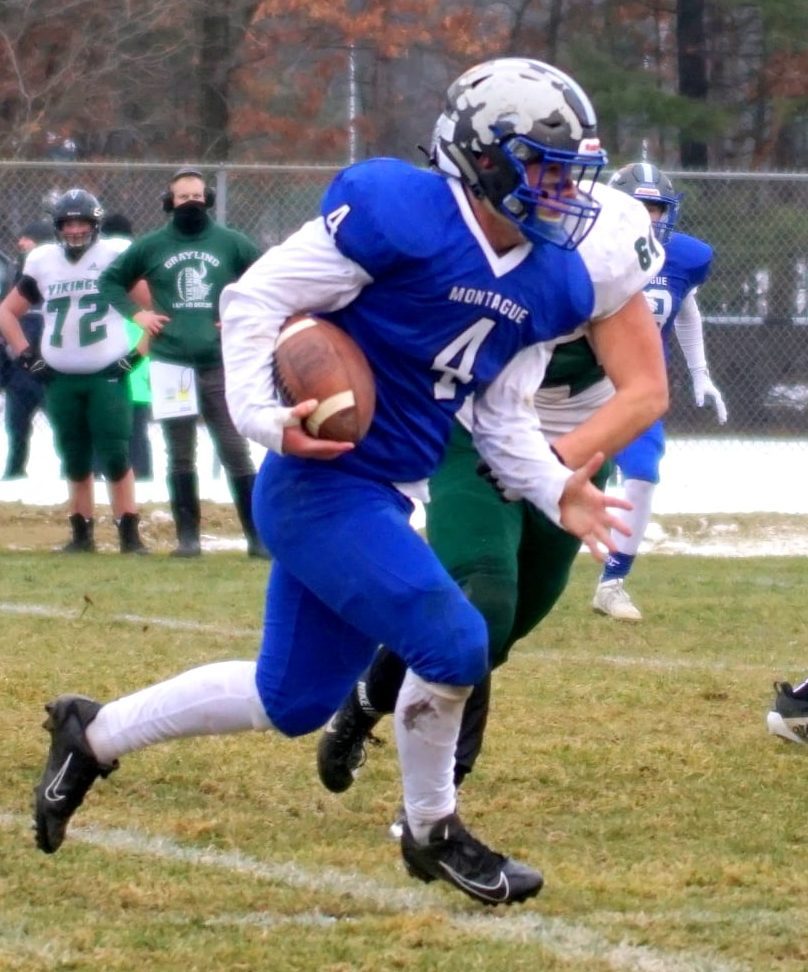 In his sophomore season, Drew led the team to the Division 6 finals state finals, but the Wildcats fell 42-28 to Jackson Lumen Christi. While the team was disappointed, Drew had a feeling that the visit to Ford Field would not be his last.

After that game, Drew told his father that he wouldn’t be following precisely in his footsteps, because he’d win a state title.

“I lost as a senior in the state finals,” Pat Collins said, referring to the 1992 season, when he was the quarterback and Montague lost to Detroit DePorres 12-7 in the state finals. “He (Drew) told me, ‘I’m not going to do what you did.’ His dream is to win a state title, and I told him I hope you don’t follow what I did.”

If the Wildcats win on Friday, it will probably have a lot to do with Drew Collins, just like it did last Saturday, when he completed 12 of 16 passes for 254 yards and two touchdowns in an impressive 49-14 win over Grayling in the state semifinals.

The strong-armed, accurate QB has thrown for 1,894 yards and 22 touchdowns this season, and has provided strong senior leadership.

“He’s taken the lead role,” said Pat Collins, who coached his teams to state titles in 2008 and 2009 and has a 157-45 career record. “He’s been on a mission and he’s almost like another coach. The motivation and communication really comes from the seniors overall, though.”

The potent Montague offense displayed all of its strengths in the semifinal victory, and there is a lot of talent in the unit.

Someone has to catch Drew’s passes, and the Wildcats are strong in that department. Senior Sam Smith leads the Montague receivers with six touchdown receptions on the year, while junior Tugg Nichols is the top real estate receiver with 576 yards. 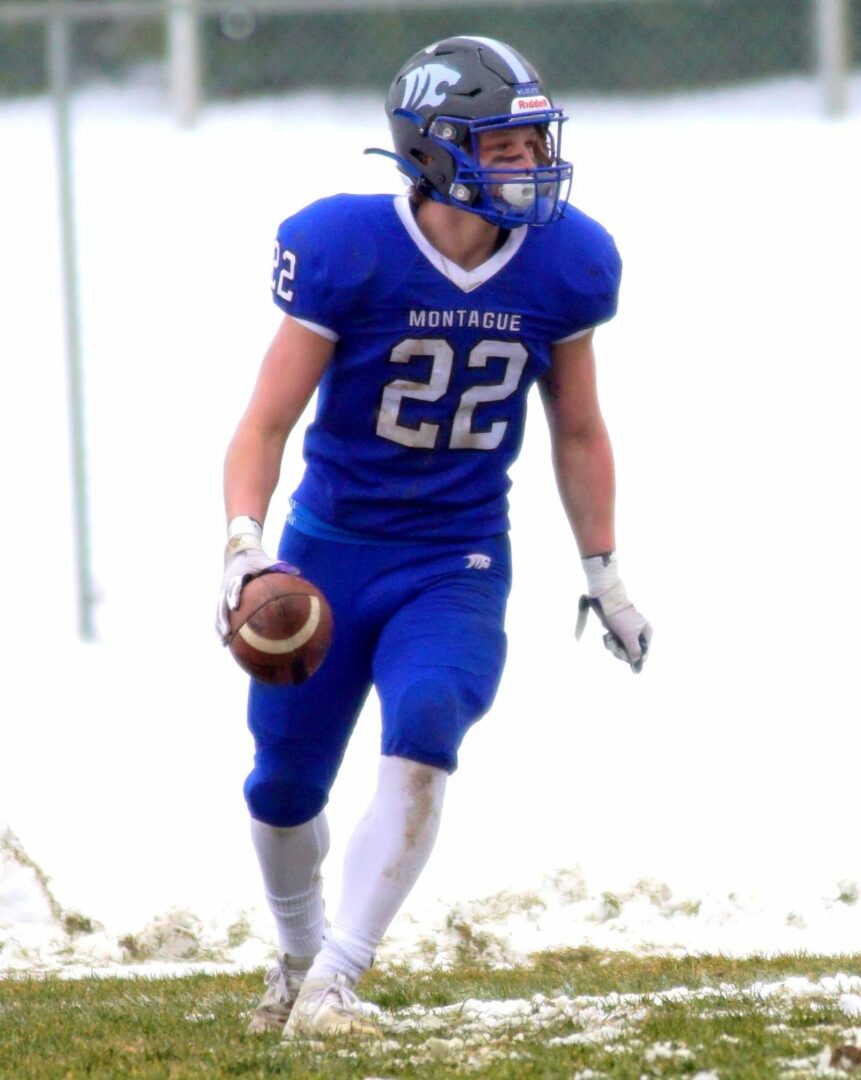 Montague’s Dylan Everett stands in the back of the end zone after breaking off a big TD run. Photo/Leo Valdez

On the ground, junior Dylan Everett leads the Wildcats with 719 yards and 16 touchdowns on 89 carries.

Making everything click are the guys on the line providing the protection and creating the holes. They include tackles Alec Waruszewski and Chris Kessler, guards Walker Martin and Luke Booth, and center Hayden McDonald.

“It’s always a work in progress,” Pat Collins said about his team’s offense, which is averaging 48.5 points per game. “Overall, I think we’re looking good, and we’ve been able to capitalize on teams by being more aggressive in recent weeks.”

The Wildcat defense has been as stingy as the offense has been explosive, surrendering an average of only 9.1 points per game this season.

Sophomore Rodney Brassfield leads the Wildcats with 73 tackles on the year while sophomore Izac Jarka has 66 and junior Hayden McDonald has 65.

The three-man defensive line includes starters Martin, McDonald and Kessler. Jarka, the receiver on offense, also has nine interceptions from his defensive back position.

The Wildcat defense will be challenged by a balanced Clinton rushing attack. 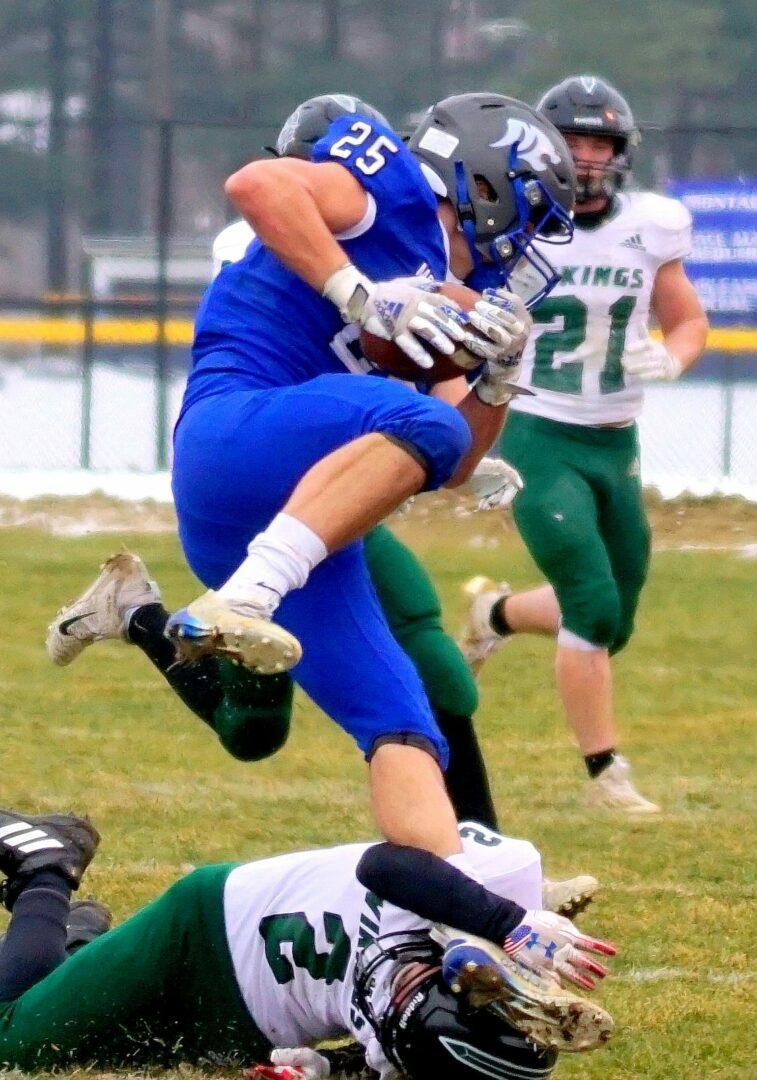 Sam Smith gets tripped up after making a catch for Montague. Photo/Leo Valdez

“They’ll run straight T,” Pat Collins said about the Clinton offense, which has only thrown 28 passes all season. “They’ll pound you and milk the clock. We have to limit them and get some stops. They’ll probably go for it on fourth-and-short yardage to try and keep possession of the ball.”

Of course Montague is taking nothing for granted headed into the finals. After losing the championship game two years ago, and blowing a fourth-quarter lead and losing in the semifinals last season, they know anything can happen in the playoffs.

If they do win the state title, however, fans watching the sidelines as the clock ticks down will likely see a major rush of emotion, as Pat and Drew Collins put the final touches on their very successful father-and-son high school football experience.

“We usually give each other a big hug,” Drew Collins said. “Especially after big games, it’s a different feeling having your dad out there. We just love sharing those moments together, and I think a state title would be the best of them all.”