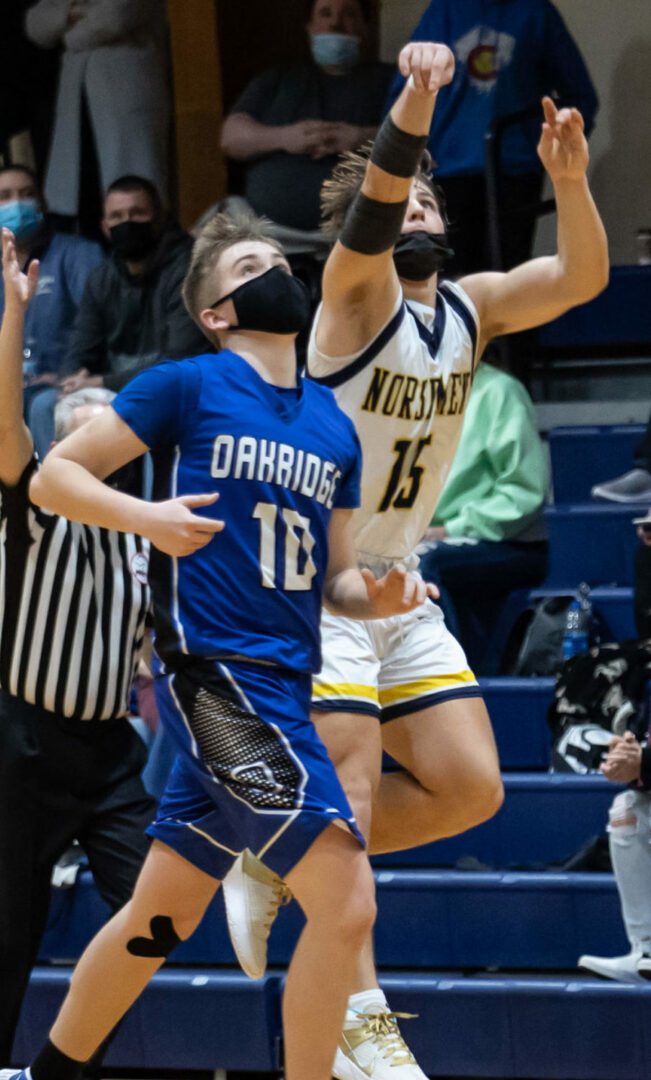 Denny Belmonte follows through on his buzzer-beating shot for North Muskegon. Photo/Tonya Pardon

Denny Belmonte nailed a shot from half court at the buzzer to propel the North Muskegon boys basketball team to a 53-52 win over Oakridge in a West Michigan Conference game on Friday.

Garrett Weaver led the Norse with 18 points, 12 coming on three-point baskets, while teammate Ethan Josza added 17 points and over 10 rebounds in the win.

The Eagles broke a 50-50 tie with 2.6 seconds left in the game on a pair of free throws before the game-winning shot by Belmonte.

Troy McManus led the Eagles with 14 points while Brennen McManus had 13.

North Muskegon is now 2-4 overall while the Eagles fell to 3-5 on the season. 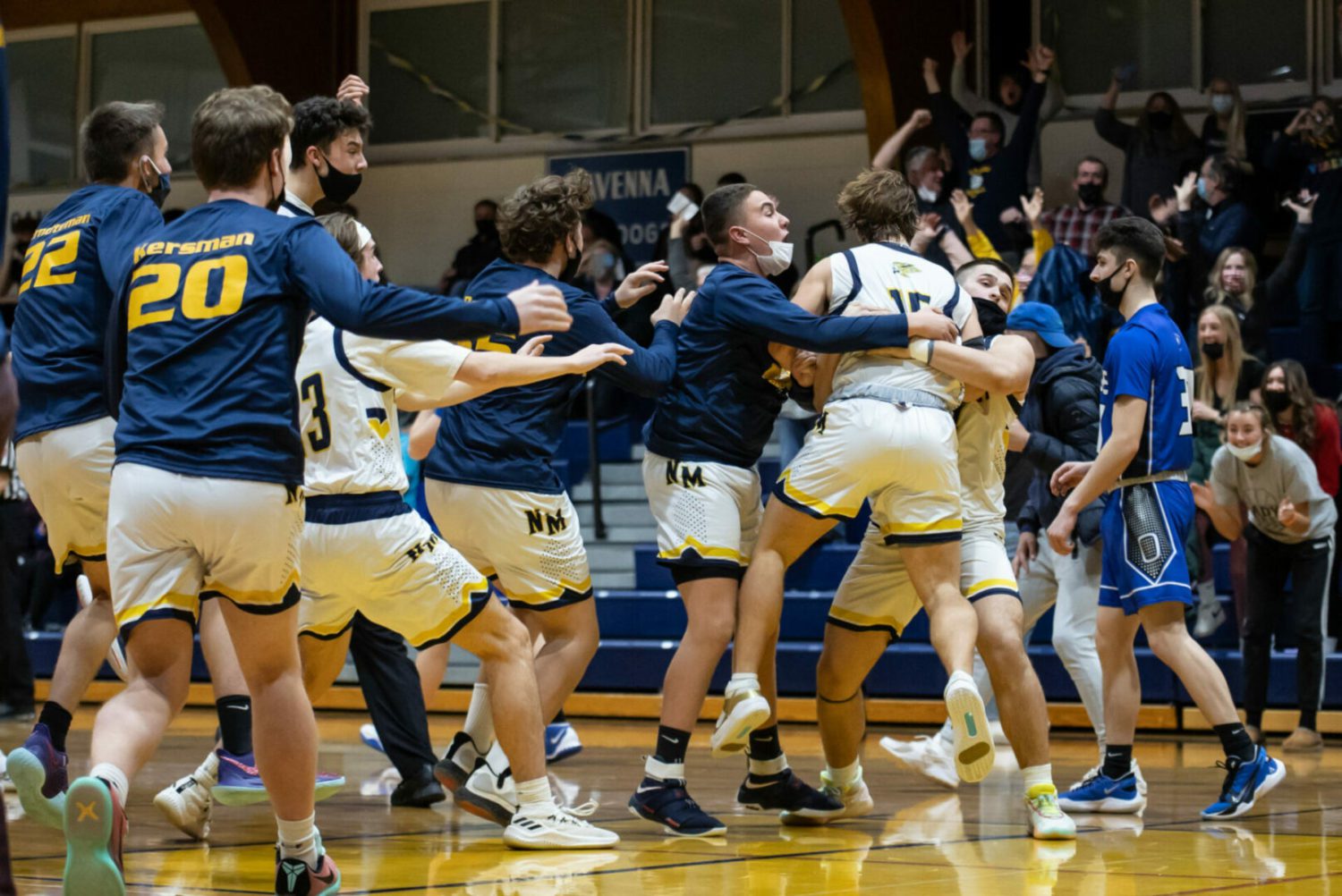 Whitehall outscored the Spartans 20-7 in the first quarter, and 18-10 in the second quarter to take a 38-17 lead at halftime.

The Vikings expanded their lead, outscoring Mason County Central 14-12 in the third, making the score 52-29 at the start of the fourth quarter. 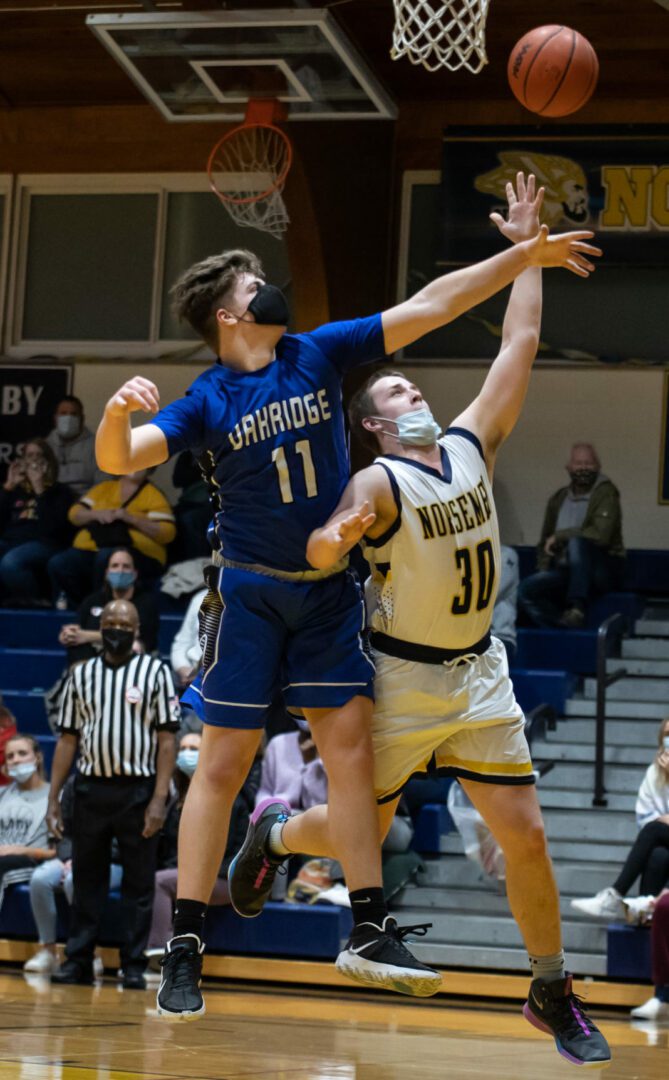 Oakridge’s No. 11 Ethan Jozsa goes to block a Will Gallo shot. Photo/Tonya Pardon

The Spartans were led by Will Chye with 15 points, while Jordan Perrone added 10 and Kolden Myer finished with nine.

The Vikings improved to 6-2 overall and 5-0 in conference play, while Mason County Central is now 0-8 on the season and 0-7 in league action.

The Wildcats outscored the Pirates 12-11 in the first quarter and 10-9 in the second quarter to take a 22-20 lead into halftime.

Montague extended its lead, outscoring the Pirates 14-12 in the third to take a 36-32 advantage into the fourth quarter.

Drew Collins paced the Wildcats with 14 points, while Lance Grattafiori had 11 and Colton Blankstrom chipped in with eight.

The Pirates were led by Kellen Kimes with 15 points, while Parker Hovey scored 11 and Tony Rayo finished with 10. 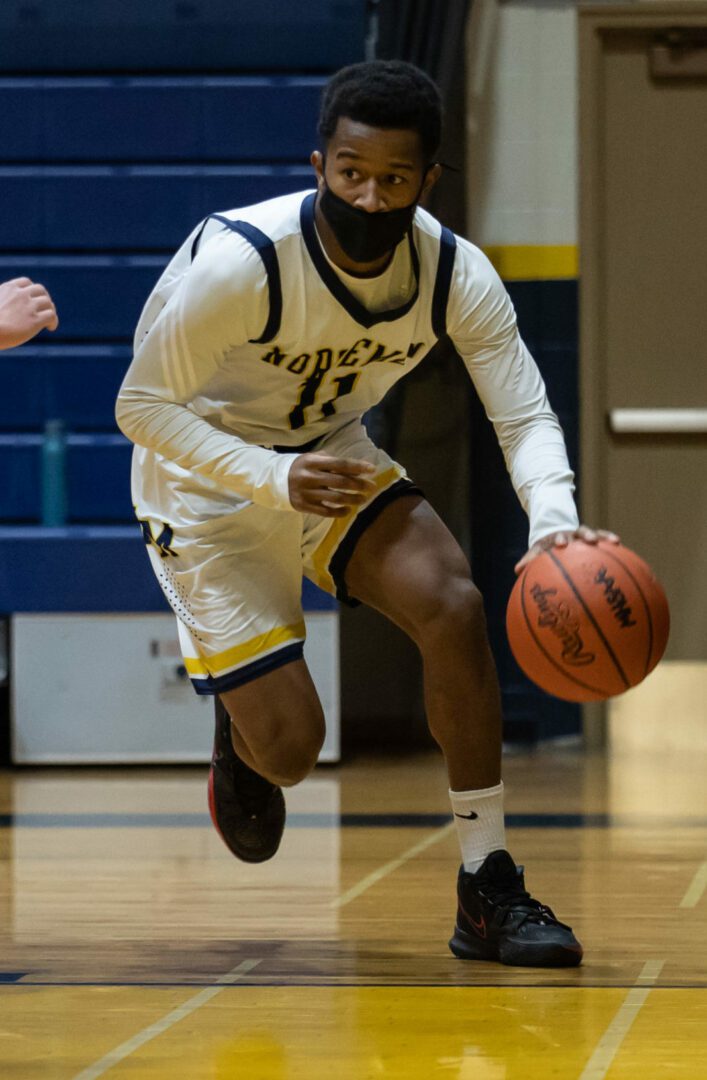 The Wildcats improved to 6-1 overall and 6-1 in conference play, while Hart fell to 2-6 on the season and 1-6 in the league.

Ravenna led 14-13 at the end of the first quarter before the Tigers tied the game 25-25 at halftime. The Bulldogs had a slim 40-39 advantage heading into the fourth quarter.

The Bulldogs closed out the game with a 16-9 run during the final stanza.

The Tigers were led by Logan Claeys with 18 points and five assists, while Bishop Lee added eight points and 10 rebounds.

The Orioles outscored MCC 16-8 in the first quarter and 11-7 in the second quarter to take a 27-15 lead into halftime.

The Crusaders cut into the lead, outscoring Ludington 10-8 in the third quarter to make the score 35-25 to start the fourth quarter.

David Shillinger chipped in for the Orioles, scoring nine points.

The Warriors were led by Tommy Kartes with 10 points while Jaden Johnson finished with seven.

The Eagles caught fire in the third quarter, outscoring the Indians by a 23-7 margin to take a 12-point lead into the fourth quarter.

Hayden Carlson finished the evening with 12 points while Casen Armstrong chipped in with 11.

The Eagles improved to 4-3 overall and 3-1 in conference play.

Holton jumped out to a 25-0 lead after the opening quarter and led 41-8 at halftime.

Bret Hosmer paced the Red Devils with 18 points. Aidan Poling chipped in with 13 points, while the duo of Austin Fowler and Carter Brant recorded nine each.

The Red Devils improved to 8-1 overall and 5-1 in conference play, while Hesperia is now 0-7 on the season and 0-4 in the league.

Fremont outscored the Coyotes 16-6 in the first quarter and 24-15 in the second quarter to take a 40-21 halftime lead.

The Packers continued their strong play and led 51-31 heading into the fourth quarter.

Braiden McDonald paced the Packers with 20 points and10 rebounds.

The Packers improved to 7-2 overall and 6-1 in conference play.

The Eagles used a strong first half to jump out to a 46-26 halftime lead. They continued their strong play pushing the lead to 65-34 at the end of the third quarter.

The Eagles improved to 4-3 overall and 2-2 in conference play.

PENTWATER 56, MASON COUNTY EASTERN 43 – The Falcons were led by Khole Hoffman, who scored 22 points and pulled down 13 rebounds.