Lumberjacks give up four unanswered goals in an ugly third period, fall to Team USA Under 17 squad 6-4

MUSKEGON – The Team USA Under-17 squad has become a problem for the Muskegon Lumberjacks – on the Jacks’ home rink, of all places.

Two weekends ago, the Under-17s came to town and beat the Jacks 5-4 in an overtime shootout. That came one night after the Jacks scored nine goals against them, and apparently inspired them to pick up the pace when they played Muskegon.

That pattern continued on Friday, when the Lumberjacks held a presumably safe two-goal lead after two periods, then gave up four straight in the third and fell to the Team USA Under-17s 6-4 at Mercy Health Arena in the most disappointing loss of the season thus far.

The Lumberjacks are now 16-9-1-1 and remain in second place in the USHL’s Eastern Conference. They are now four points behind first-place Chicago, which beat Green Bay on Friday night.

The Jacks will be off until next Thursday, when they will host the first of a three-game weekend series against Green Bay.

The loss ruined another strong performance by Lumberjacks forward Tanner Kelly, who had two goals and an assist. That continued a hot streak that included three goals in two games last weekend against Chicago. 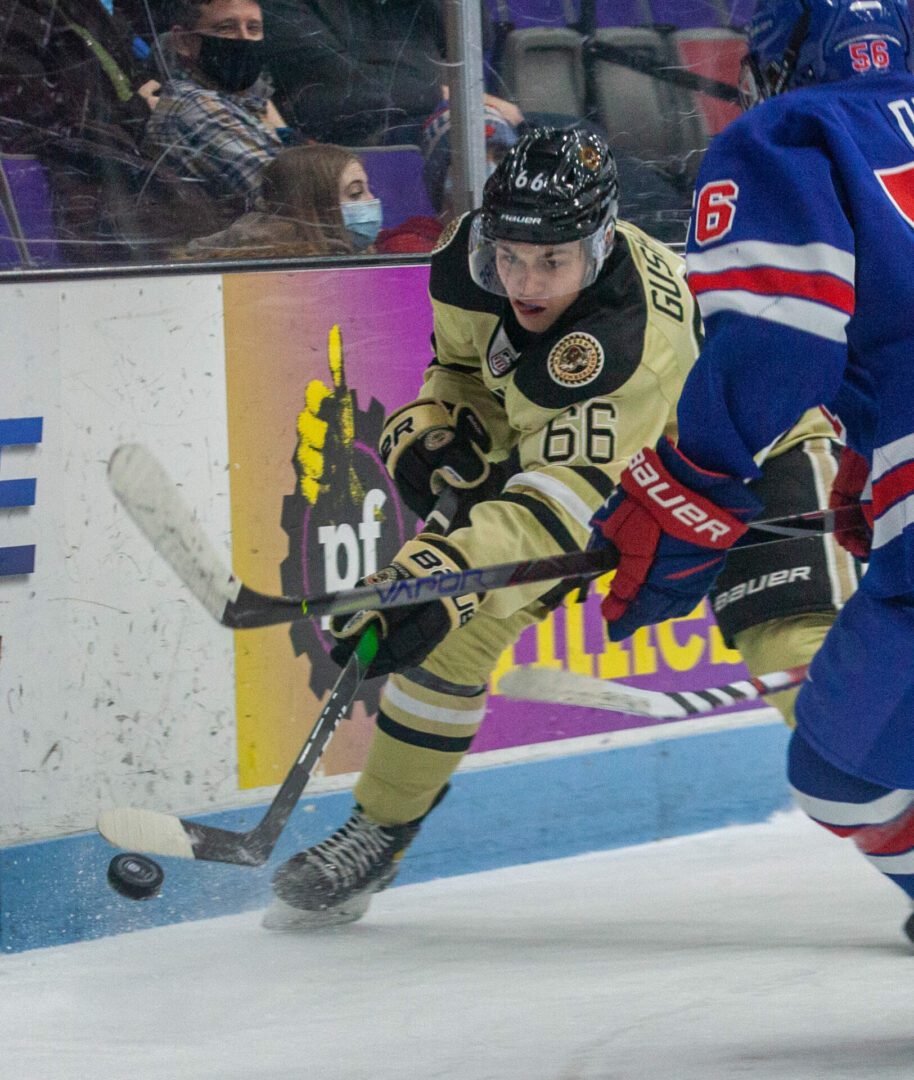 Danil Gushchin digs out the puck along the boards for Muskegon. Photo/Jason Goorman

It also highlighted an ongoing problem for the Jacks. While they certainly have plenty of offensive punch, and lead the USHL in scoring, they are second from last in the league in goals given up.

Lumberjacks Coach Mike Hamilton acknowledged that issue after Friday’s game, and pointed the finger at team defense and some shaky goaltending.

“They are a good team and when you give them ice, time and space they are going to make you pay a price,” said Hamilton about the Under-17s. “We got away from the game plan for 20 minutes and they were the better team in the third period, and we left two points (in the standings) on the table for sure tonight.

“It’s our team defense. We gave up two breakaways in the third period and it shouldn’t be happening at this level. At the end of the day we have some details to clean up defensively, and I wouldn’t call it the best game from our goaltender either.”

The game started out great for the Lumberjacks when defenseman Jacob Guevin scored his sixth goal of the season with a shot from the point, just 50 seconds into the game.

Muskegon’s Nick Portz made the score 2-0 when he stole the puck near center ice and notched a shorthanded goal on a breakaway at 19:20 of the first period. 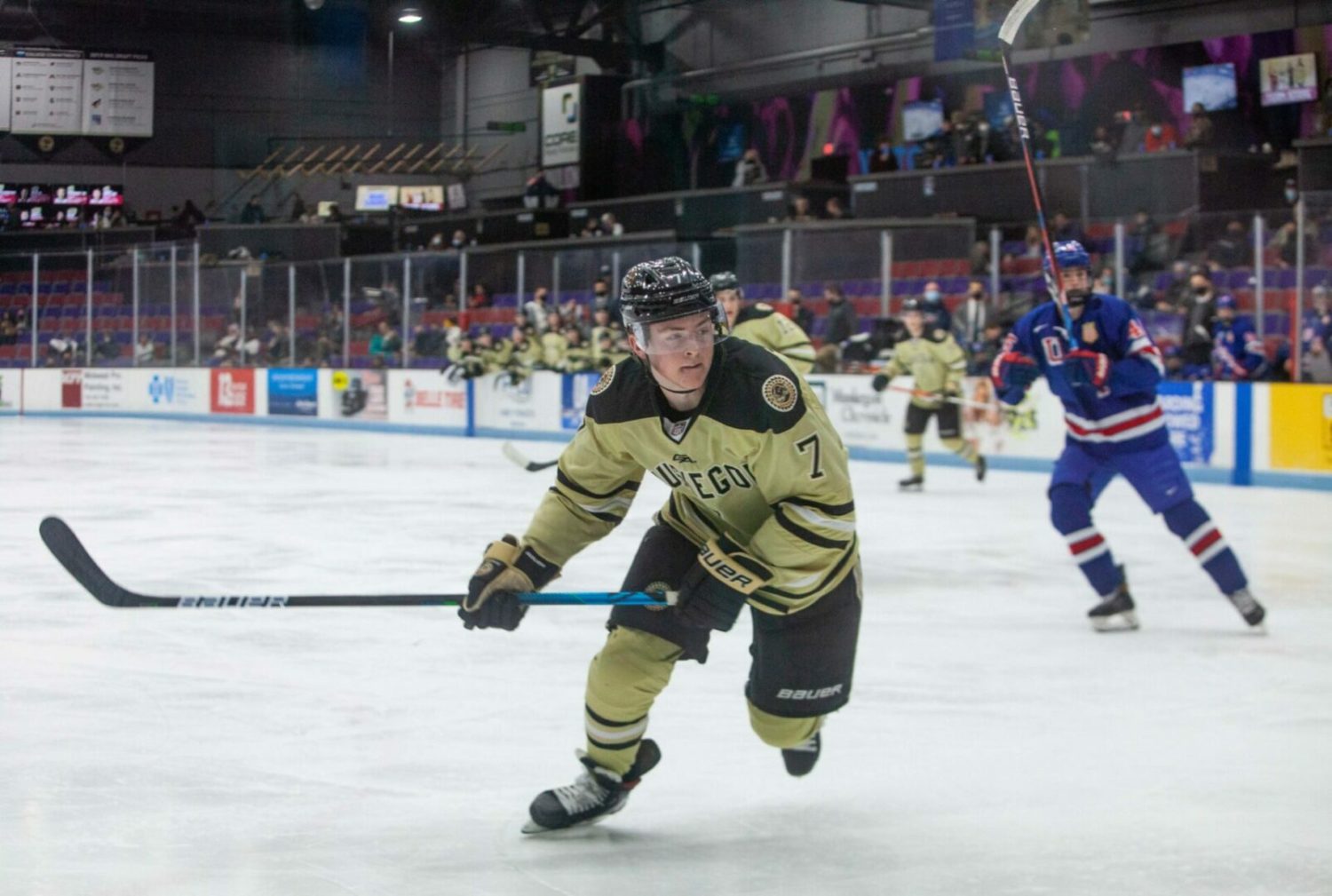 Philip Tresca hustles toward the boards for Muskegon. Photo/Jason Goorman

The teams traded goals in the second period. Team USA’s Jimmy Snuggerud scored at the 4:43 mark to make the score 2-1. Kelly scored his first goal of the night just under a minute later by knocking in a rebound near the goal, and Muskegon led 3-1.

Snuggerud struck again at the 9:36 mark, cutting the Jacks’ lead to 3-2. Then Kelly answered again about two minutes later, taking a beautiful pass from Danil Gushchin at the right side of the net and knocking it home, giving the Lumberjacks a 4-2 lead at the second intermission.

But everything collapsed for Muskegon in the third period. Team USA collected unanswered goals from Cutter Gauthier (52 seconds into the period), two from Rutger McGroarty (8:35 and 10:11) and Logan Cooley (12:07), and skated away with the comeback win.

One of those goals came on a shorthanded breakaway, while another came on a second breakaway, leaving the Lumberjacks’ defense looking pretty defenseless in the face of the assault.

“That was a tough one because again we had an opportunity, if we had stayed with the game plan,” Hamilton said. “There is a lot to learn there.” 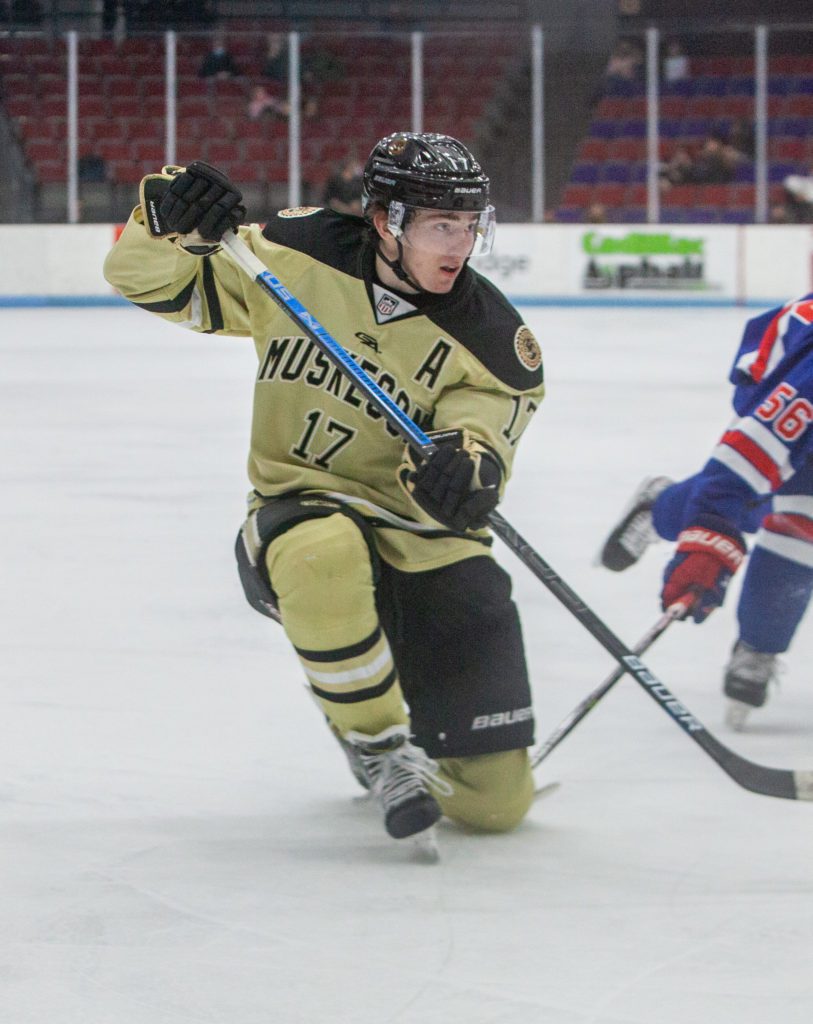 Cameron Berg follows through after a shot on goal for Muskegon. Photo/Jason Goorman 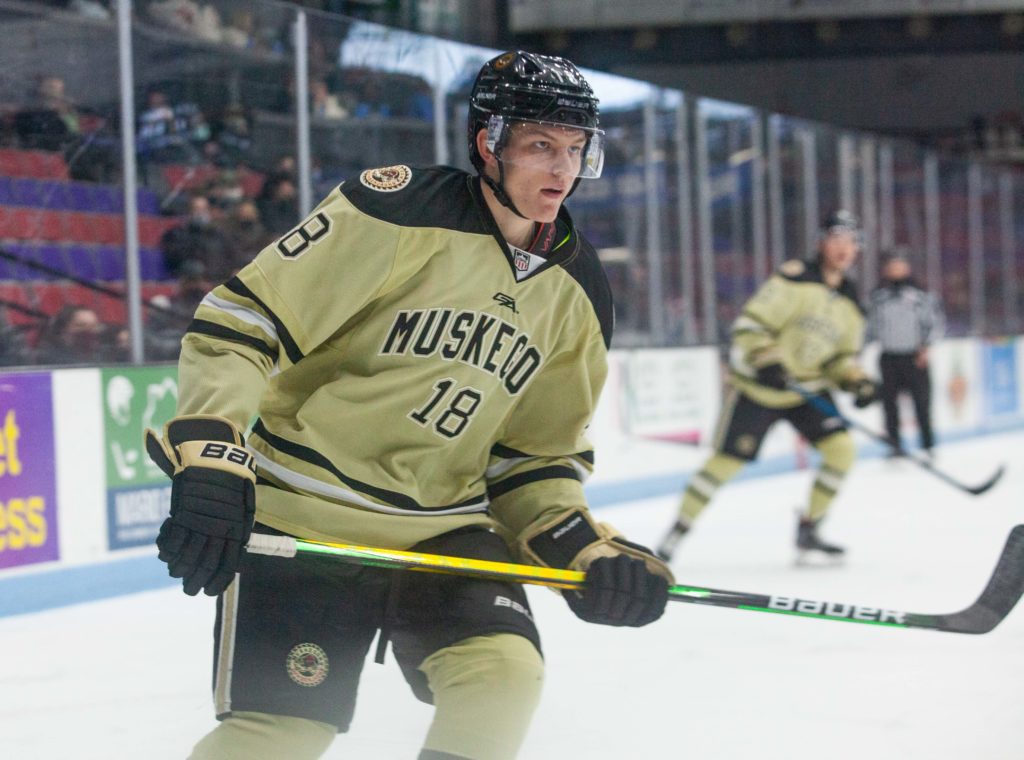 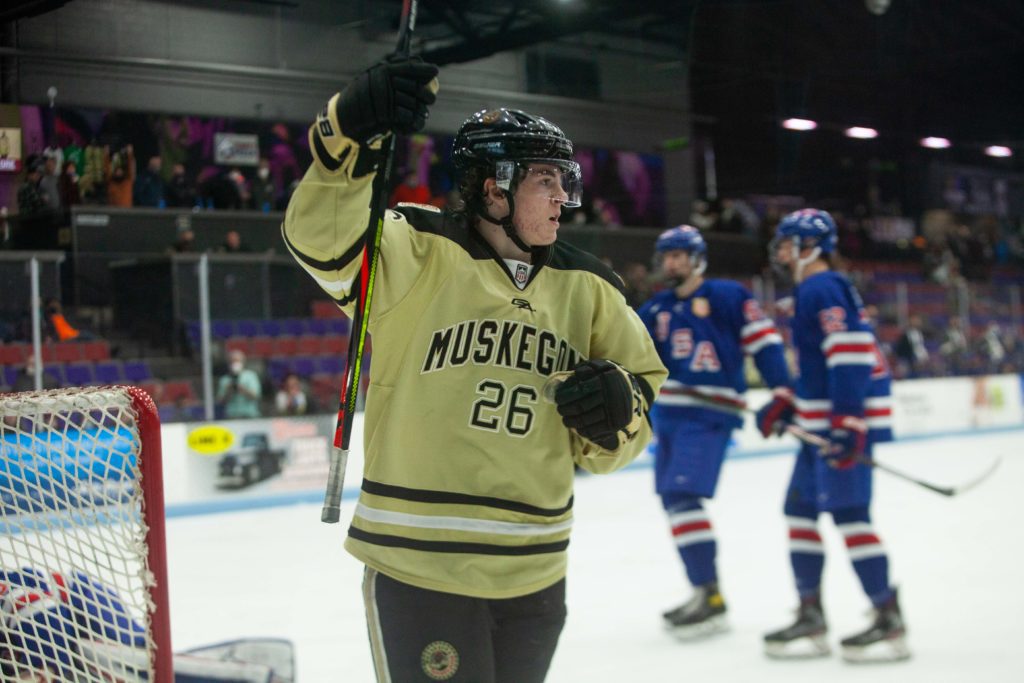 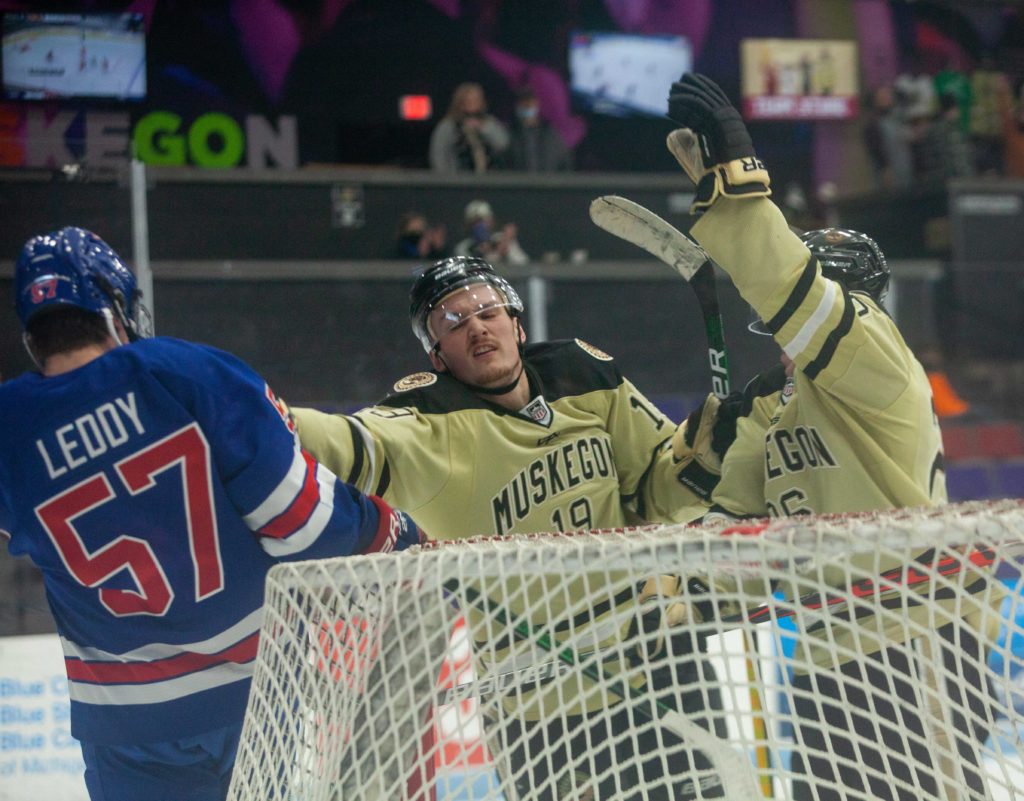 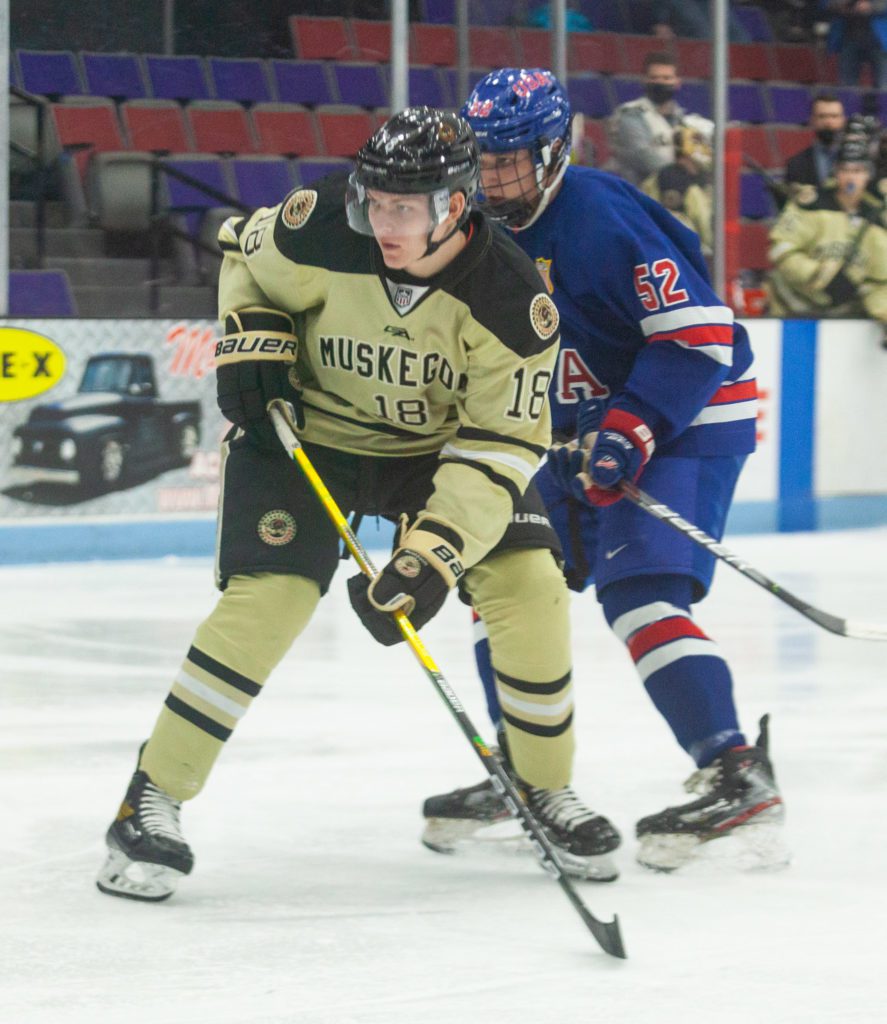 Muskegon’s No. 18 Owen Mehlenbacher gets in front of the Team USA defender near the net. Photo/Jason Goorman

Whitecaps beat Lansing; magic number for clinching a playoff spot down to one