MUSKEGON – When the Muskegon Lumberjacks opened the season, long winless streaks were definitely not anticipated.

With a lot of talented and experienced players back on the roster, the expectation was to win a lot of games in a row, not the other way around.

But suddenly the Lumberjacks find themselves in the midst of a season-worst five-game winless streak (including four regular losses and one overtime shootout loss) following Saturday’s disappointing 5-3 defeat at the hands of the Green Bay Gamblers at Mercy Health Arena.

The outcome was particularly painful because Muskegon led 3-1 early in the second period, and seemed well on the way to getting a much needed win.

But the score was tied by the end of the period, Green Bay took the lead in the third, and the Lumberjacks failed to score the equalizer down the stretch, despite playing seven minutes of the third period with a man advantage. 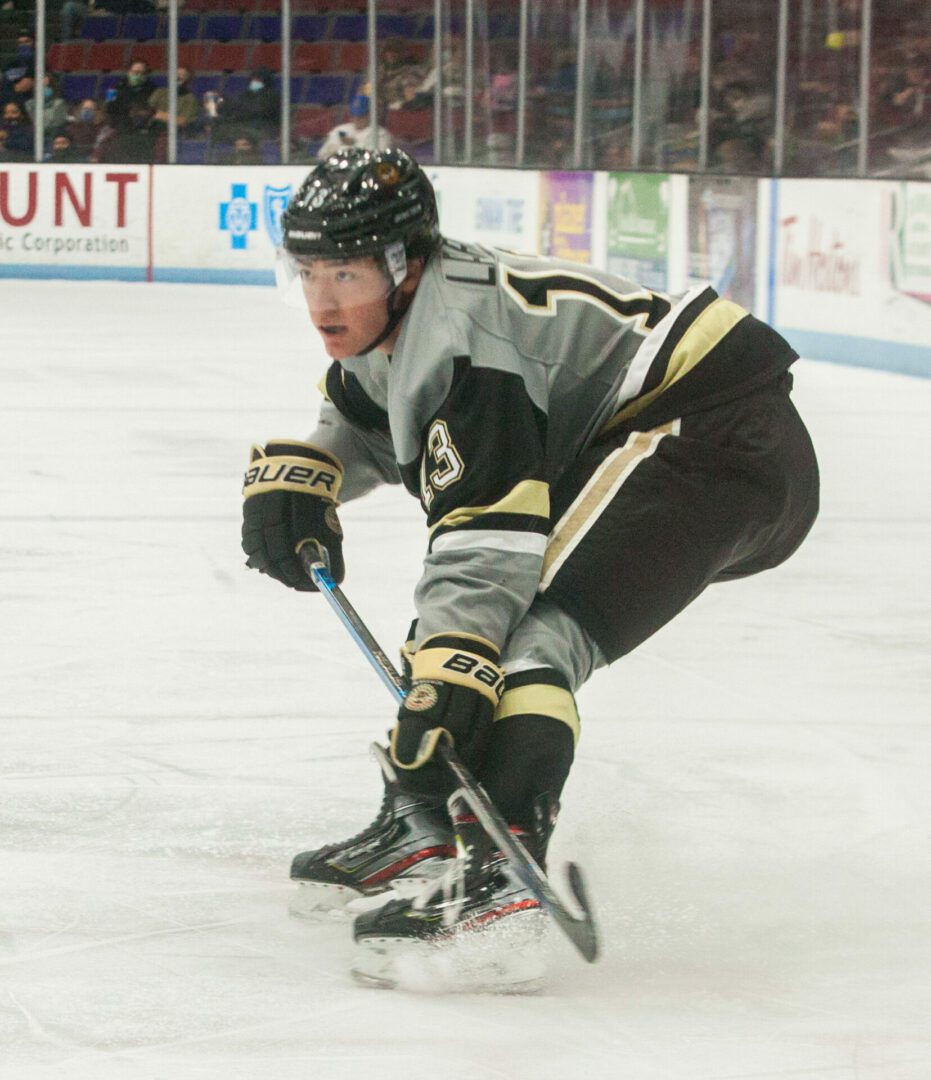 John Larkin looks on after a shot on goal. Photo/Jason Goorman

The Jacks ended up losing all three games of the weekend home series against the Gamblers, and now are fighting to hold their place in the USHL’s Eastern Conference standings. At the start of the weekend they were in second place, six points ahead of third-place Green Bay. Now they are clinging to second, just one point ahead of the Gamblers.

Despite the difficult weekend, Lumberjacks Coach Mike Hamilton was not terribly upset after the game. That’s because his team played hard, after turning in a listless performance on Friday night, when they lost 4-0 to the Gamblers.

“Everyone was unhappy about last night,” said Hamilton, whose team is now 16-11-3 on the season. “We talked to the guys and held them accountable this morning and they responded. As a coach, either your team is going to roll over and not play for you or they are going to work through it.

“We had a great efforts tonight. The guys battled, but when things aren’t going well for you, sometimes luck works against you. We played one of the best teams in the league and those games can go either way.”

Hamilton also agreed that the Jacks are not quite the same without star forward Danil Gushchin, who was injured in Thursday’s game and did not play on Friday or Saturday. His injury is not serious, and his status is day-to-day.

“Gushchin averages a point a game, and he attracts the attention of the other team, which frees up the second and third lines,” the coach said.

The Jacks came out flying, taking a 1-0 lead just 33 seconds into the game when Ben Strinden popped a rebound past Green Bay goalie Matt Davis, who recorded the shutout against Muskegon on Friday. 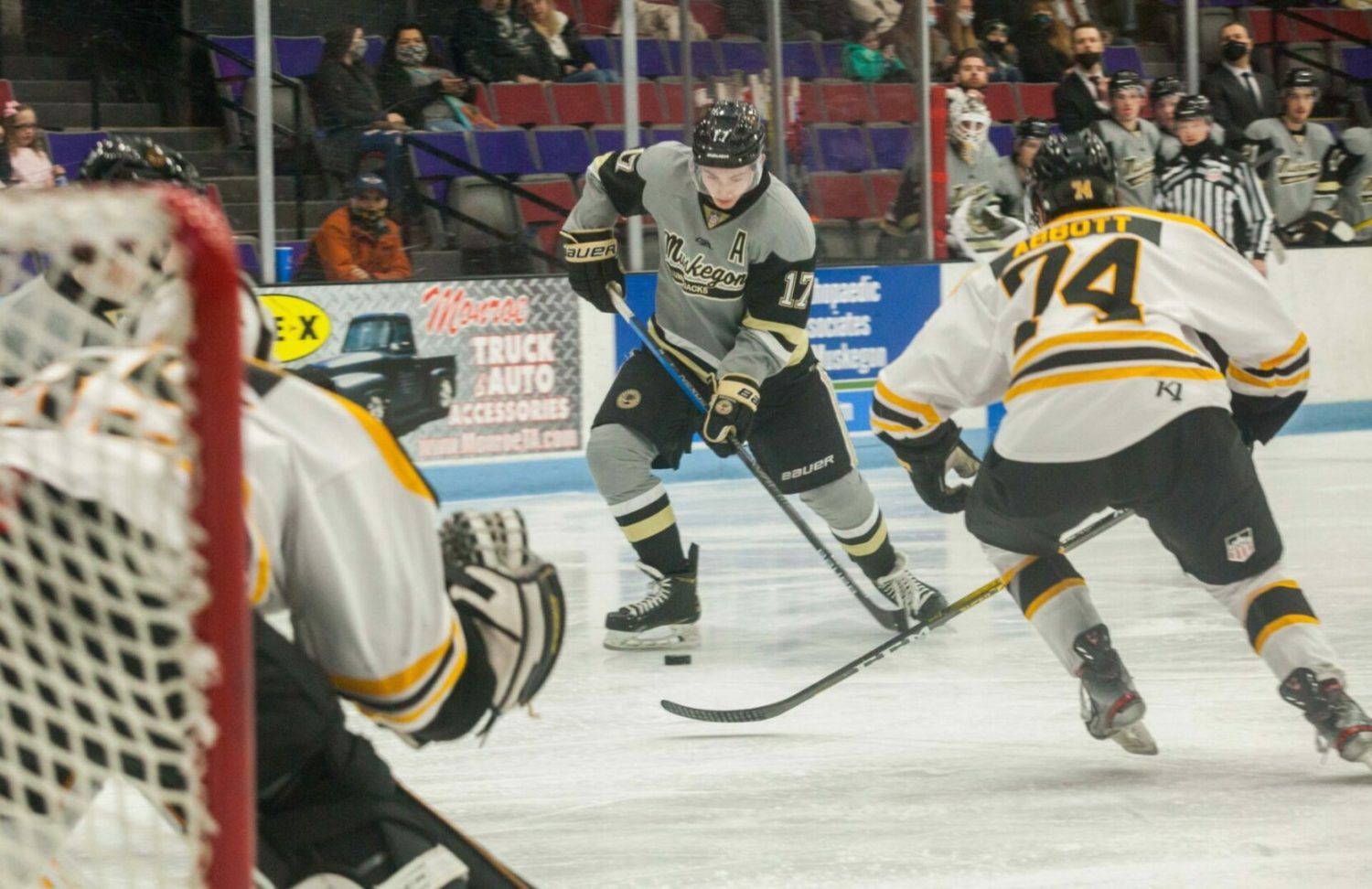 Muskegon’s No. 17 Cameron Berg gets open with the puck in front of the Green Bay net. Photo/Jason Goorman

Green Bay’s Ryan Greene tied things up when his shot was partially stopped by Muskegon goalie Nate Reid, but still trickled slowly into the net at 3:18 of the first.

Muskegon’s Brad Marek put the Jacks back on top at the 16:06 mark when he skated up the right side and deposited a nifty backhand shot past Davis. The score was 2-1 at the first break.

The second period started out strong for the Jacks. Nick Portz put the home team up 3-1 with a goal at the 2:39 mark.

But then Green Bay got a great opportunity when the Lumberjacks were called for back-to-back penalties, at 11:16 and 11:44, giving the Gamblers a 5-on-3 advantage for 1:32.

Green Bay needed less than a minute of that time before Jake Schmaltz scored a power play goal at the 12:14 mark, making the score 3-2. Then Jackson Kunz got a shot past Reid with less than a minute left in the period, leaving the game tied 3-3 at the second break.

The Gamblers got a bit of luck at the 4:13 mark of the third period, when a puck bounced off a crease in the ice rink door behind the Muskegon goal and trickled in front of the net. Green Bay’s Nate Hanley noticed it and quickly poked it into the net, giving his team a 4-3 lead. 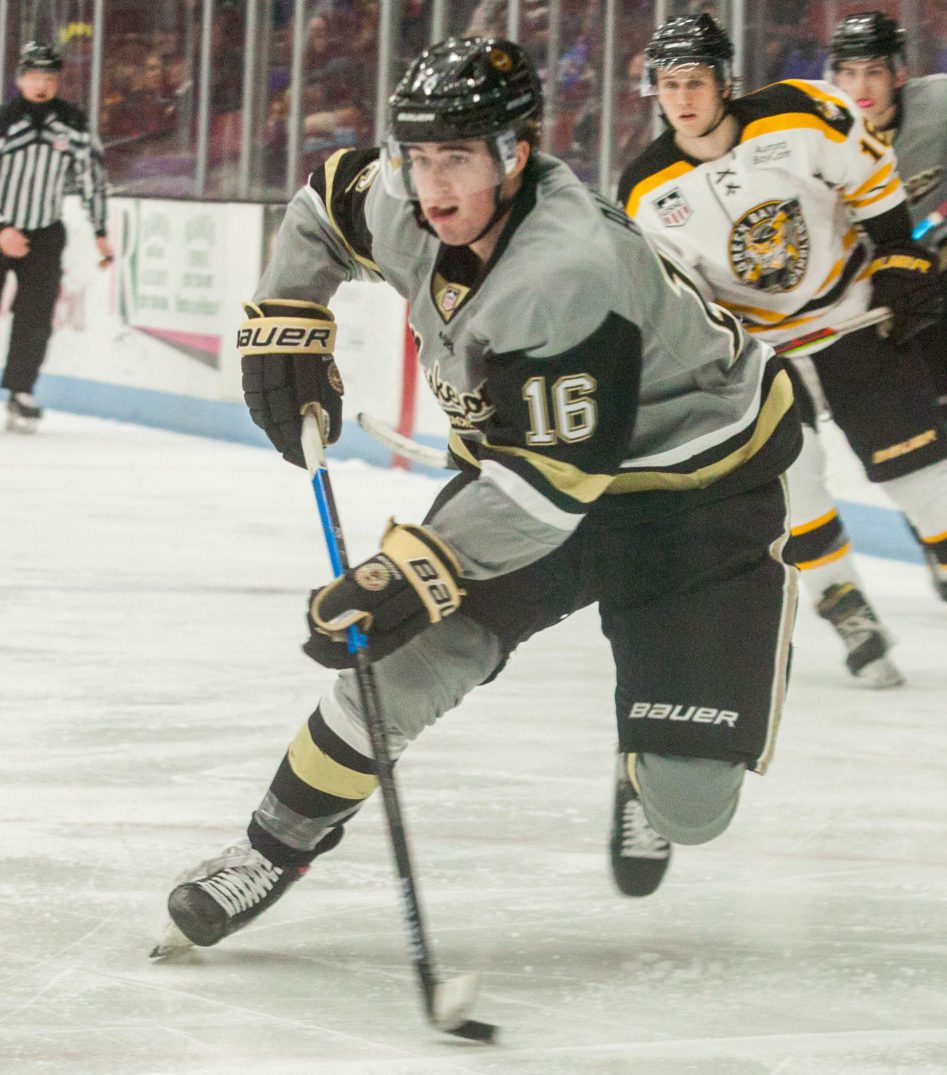 Muskegon’s John Farinacci shifts skates as he approaches near the goal. Photo/Jason Goorman

The Jacks had plenty of opportunities to get back into the game.

It started at 9:55 of the third period, when Green Bay’s Jarrod Crespo received a major penalty for head contact, giving the Lumberjacks a five-minute power play, but they couldn’t score despite having the lengthy man advantage.

Green Bay was penalized again at the 15:07 mark, giving the Jacks a two-minute power play, but again nothing went in the goal.

“We win the hockey game if our special teams are better,” Hamilton said. “We give up a 5-on-3, then we followed up with seven minutes of power play time in the third period and we didn’t put it in the back of the net. If there is an area to clean up on right now it is our power play, but again great effort tonight.”

Muskegon pulled Reid for an extra attacker with 1:24 left, but the strategy backfired when Green Bay’s Kunz scored an empty-netter to nail down the win.

The Jacks lost despite having a massive 49-30 advantage in shots on goal. Davis stopped 46 of 49 shots in goal for Green Bay. 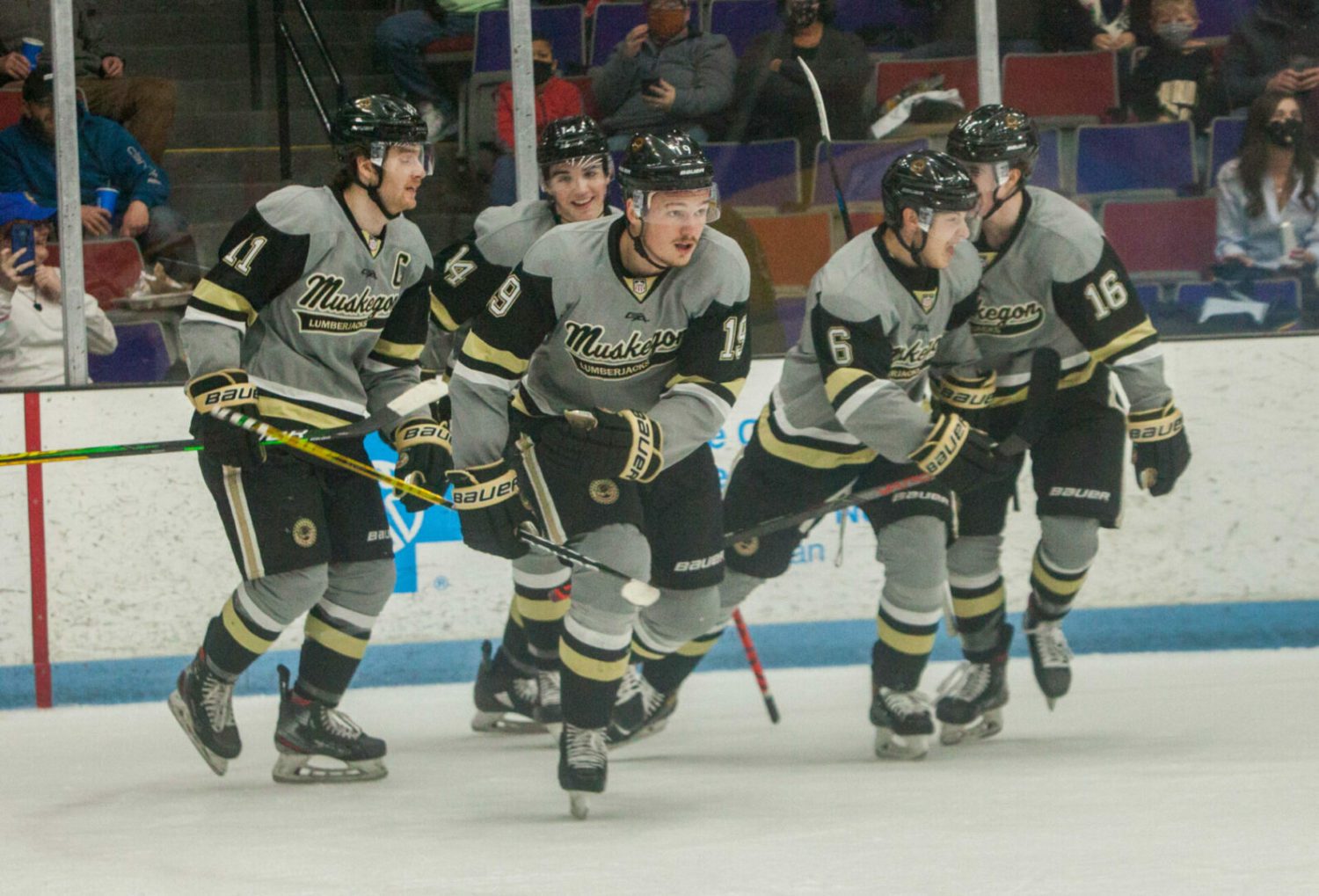 The Lumberjacks celebrate after a second period goal. Photo/Jason Goorman 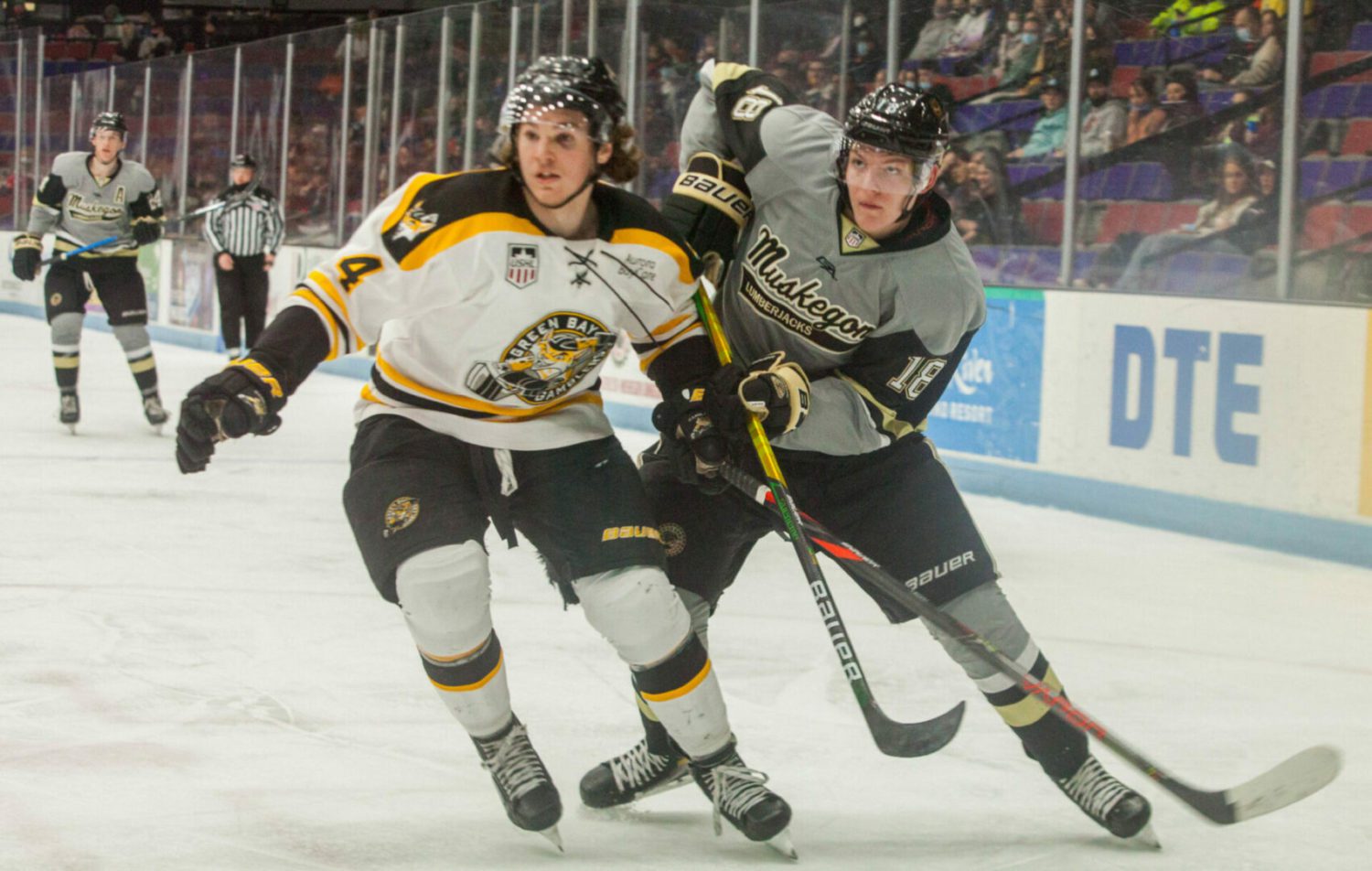 Montague completes its turnaround season, finishes 9-0, with a 49-20 win over Fremont