After 14 years, 200 wins and many memorable moments, Montague hoops coach Dave Osborne still has his team in title contention

MONTAGUE – Dave Osborne likes telling a story from his earliest playing days, back when he was just a child starting to learn the game of basketball.

“I remember coming out to a youth basketball practice and for whatever reason, the coach didn’t show up,” Osborne recalled. “Although my dad had never played basketball, he jumped right in and said, ‘OK, let’s do this,’ and he began running the practice the best he could.” 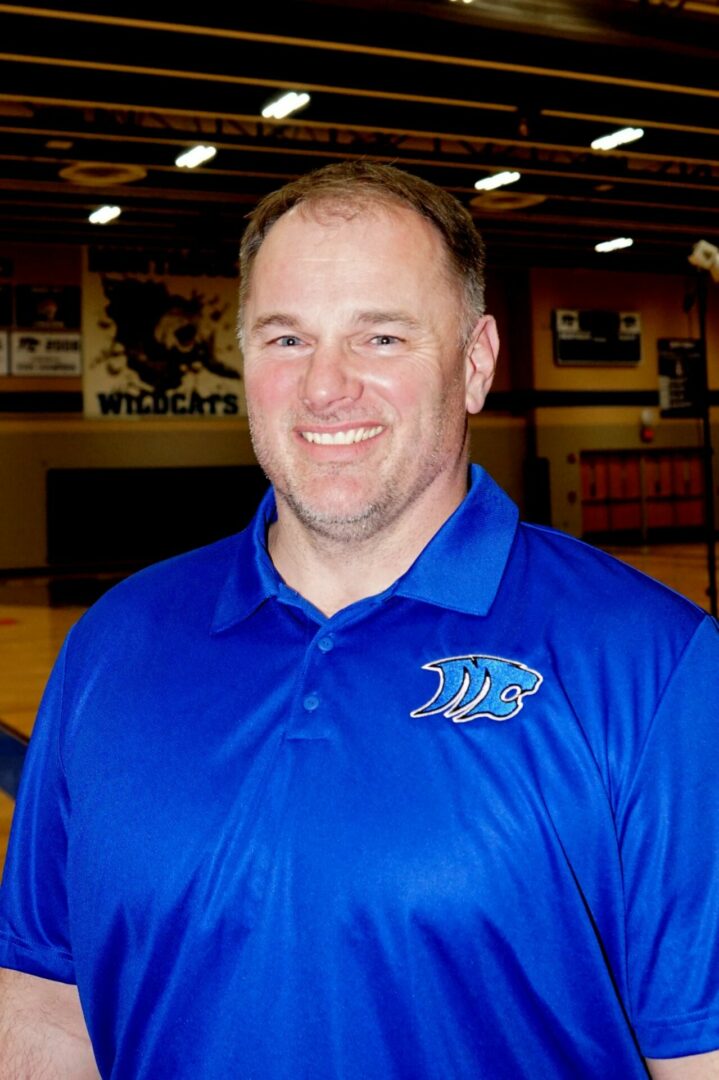 Osborne said his father, Dave Sr., took his newfound coaching gig as a challenge, and he soon bought instructional books on the sport and tried to soak up as much knowledge as he could from anyone who would be willing to share some insight.

“He taught me how to handle the ball with both hands and shoot correctly with proper form,” Osborne said. “I like to pride myself on my teams being fundamentally sound, so that definitely was carried on from my dad.”

Teaching the fundamentals, strict preparation and attention to detail have served Osborne well in his own coaching career. He recently won his 200th game at Montague High School, his alma mater.

That victory, a 52-46 win over West Michigan Conference rival Hart on Feb. 27, brought his career record to 205-92, because he also coached one year at Orchard View before moving on to the varsity job at Montague in 2007. Prior to his one-year gig at OV, he coached three seasons at the junior varsity level for Montague.

Montague, he said, has always been home, and he has cherished youthful memories of going to the township park at 6 p.m. on a nearly daily basis to play with his friends.

“We’d go there every night,” he said. “That’s where we learned how to shoot free throws, because we knew if we didn’t make free throws, we weren’t going to play.”

Osborne developed into a standout guard for the Wildcats, graduated in 1988, then spent two seasons playing at Muskegon Community College.

“We went to the national championship in 1990 (a 85-76 loss to Community College of Allegheny County), and probably my career highlight was a win in the tournament against the No. 1 team in the nation, when I hit the game-winning shot,” Osborne said. 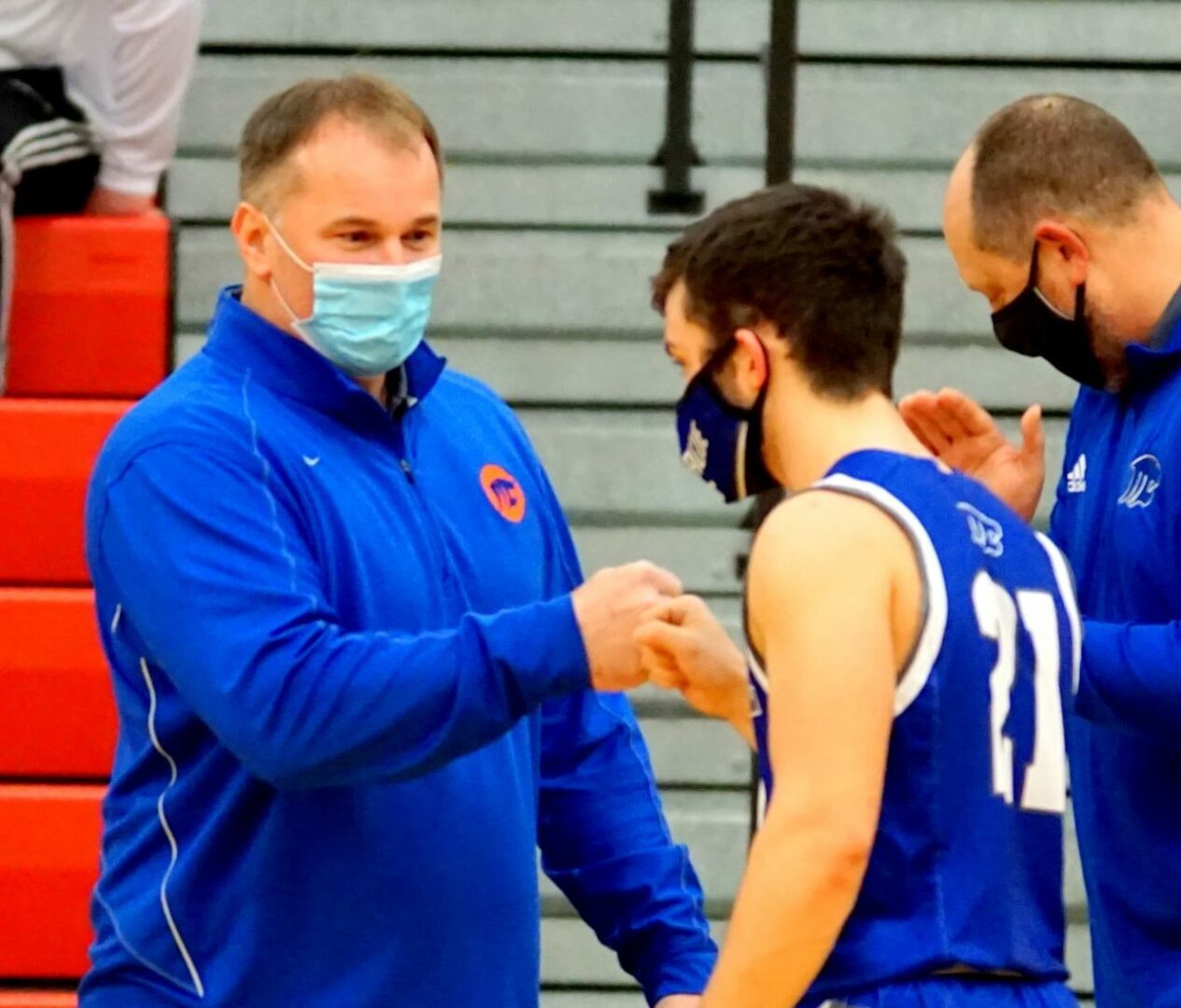 Osborne said one of the toughest decisions he made as a young coach was leaving Montague’s JV to head to OV, because he saw a nucleus of young talent at Montague that was capable of great things. Fortunately, he was able to coach many from that group upon his return to Montague, and they didn’t disappoint.

Led by a talented cast, including All-Conference selections Stuart Jefferies, Michael Mack and Matt DeJong, as well as Class C All-State special mention pick Cody Kater, the Wildcats advanced all the way to the Class C state semifinals at Michigan State University’s Breslin Center in 2009, before falling to Schoolcraft, 63-50.

Osborne said one of his most memorable moments during that tournament run was the regional championship against Sanford Meridian, an outstanding game that saw the Wildcats pull out a 71-66 thriller.

“It was just two heavyweights going at it,” Osborne said. “Just so many tense moments and our kids kept responding.”

Kater, now the girls varsity basketball coach at Montague, remembers those tournament wins fondly, but when discussing Coach Osborne, he said it was the moments before the games that stand out in his mind.

“There weren’t any specific moments from games that I remember, but I know he was always so well prepared and he always had a solid game plan and we were able to act it out,” Kater said. “He always had our backs. He was definitely a player’s coach. He put us first. You could confide in him with anything in our lives. 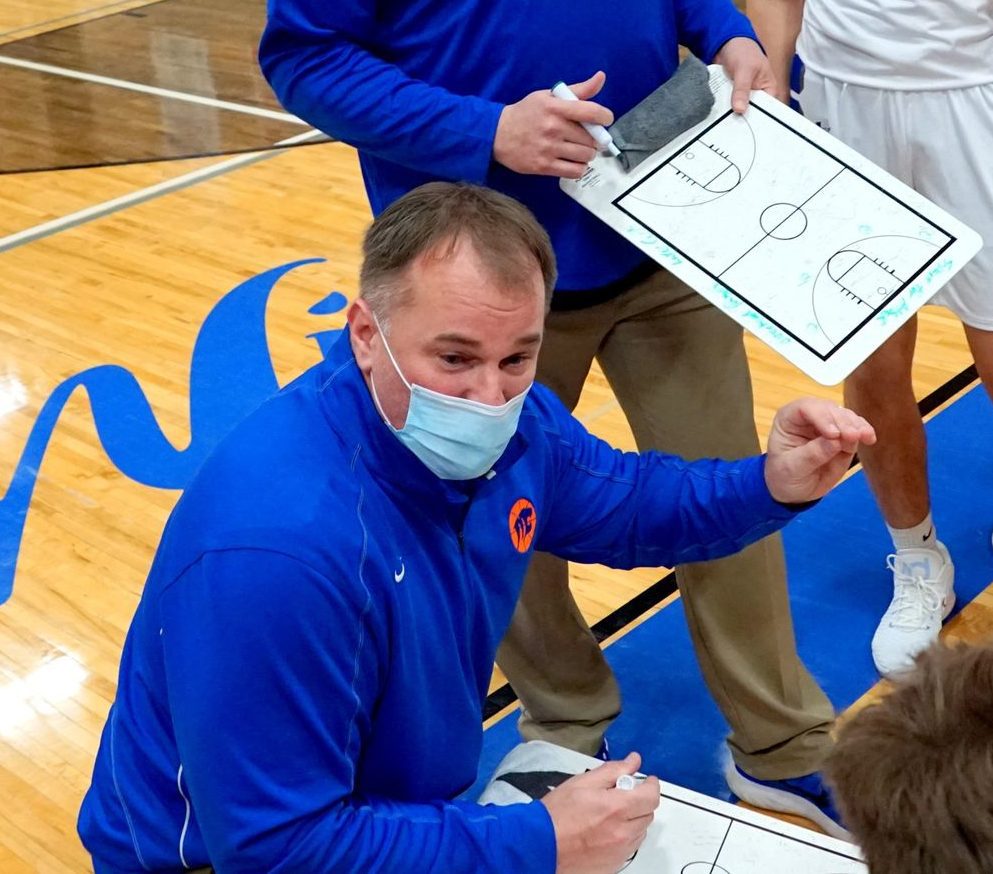 Montague Coach Dave Osborne talks with his team during a time out. Photo/Leo Valdez

“We knew he was always going to coach us hard, but he believed in us.”

That’s why it was important for Kater and others in the community to be heard when news leaked in May 2019 that school administrators had asked Osborne to resign from the position. A few weeks later, after hearing from a number of his supporters at a school board meeting, Montague’s board reversed the decision and voted to renew his contract.

“For certain people, I think it was nice to see how much support he had throughout the community, including from several of his past players,” said Kater, who attended that school board meeting. “I thought it truly showed him as someone who has done so much for the community. It was almost like a voice of reason needed to be heard.”

Osborne’s perspective is, and continues to be, that as a coach, it’s impossible to make everyone happy, even during winning seasons.

“Not everyone is going to love what you do, but I believe part of being a leader is being willing to accept that,” he said. “I’m always going to do what’s best for my team and my players. That’s always at the forefront of my mind. And I’ll continue to represent the school the best I can.”

That’s why Kater said he loves picking his old coach’s brain for tips throughout the season, and he’ll also give his own insight on Montague’s players.

“I’ve got a really good relationship with a lot of them from coaching them on the football team and (teaching) in class with the PE stuff,” Kater said. “It’s definitely a basketball program here, in that we push each other. It reciprocates.” 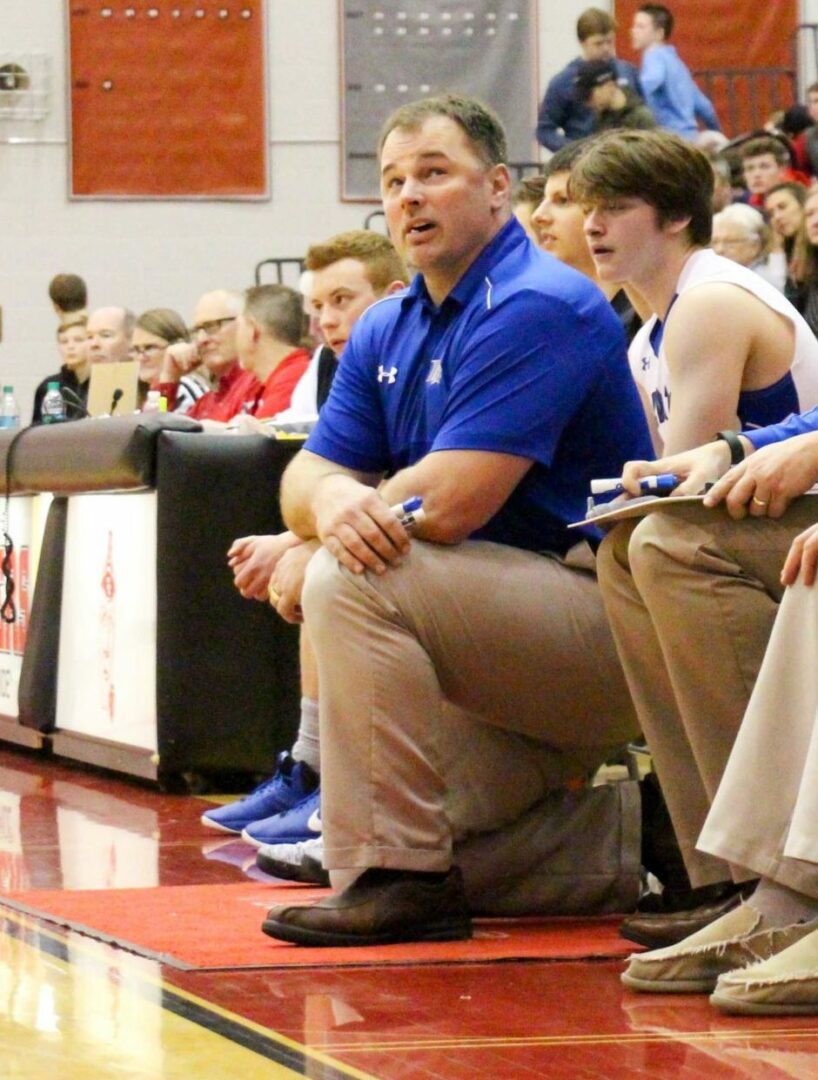 Montague Coach Dave Osborne looks at the clock after a Spring Lake foul back in the district finals in 2017. Photo/Jason Goorman

Osborne has the Wildcats in the thick of the race for a West Michigan Conference title again this season with a 6-2 record. There have been obvious challenges during the Covid-19 shortened and condensed season, however, including Montague having three games in three nights last week.

Remarkably, all were wins, over Oakridge on Wednesday and Mason County Central on Thursday, and the milestone 200th win over Hart on Friday. The Wildcats will host a key conference game against neighboring rival Whitehall on Thursday.

Osborne’s basketball life at Montague has really come full circle, He’s coached the kids of some of his former classmates at Montague, and his family is also fully immersed in the sport.

Along with his wife, Deb, the Osborne’s are a self-described basketball-crazed family. Both of their daughters – senior Braquelle and freshman Kendall – are on the Wildcats varsity girls squad, and they also have two sons – seventh-grader Hunter and third-grader Garde – who are playing the sport.

“My hope is to stay on long enough to coach (my sons), but if it’s not in the cards, so be it,” Osborne said. “If I am able to coach that long, it’s all for the love of basketball.”