hopes alive for another title on Tuesday night with a hard-fought 47-40 victory over Holland at Redmond-Potter Gymnasium.

But Guy and his players know they will have to perform better if they hope to catch Zeeland East, the team they trail by one game in the O-K Green conference standings. 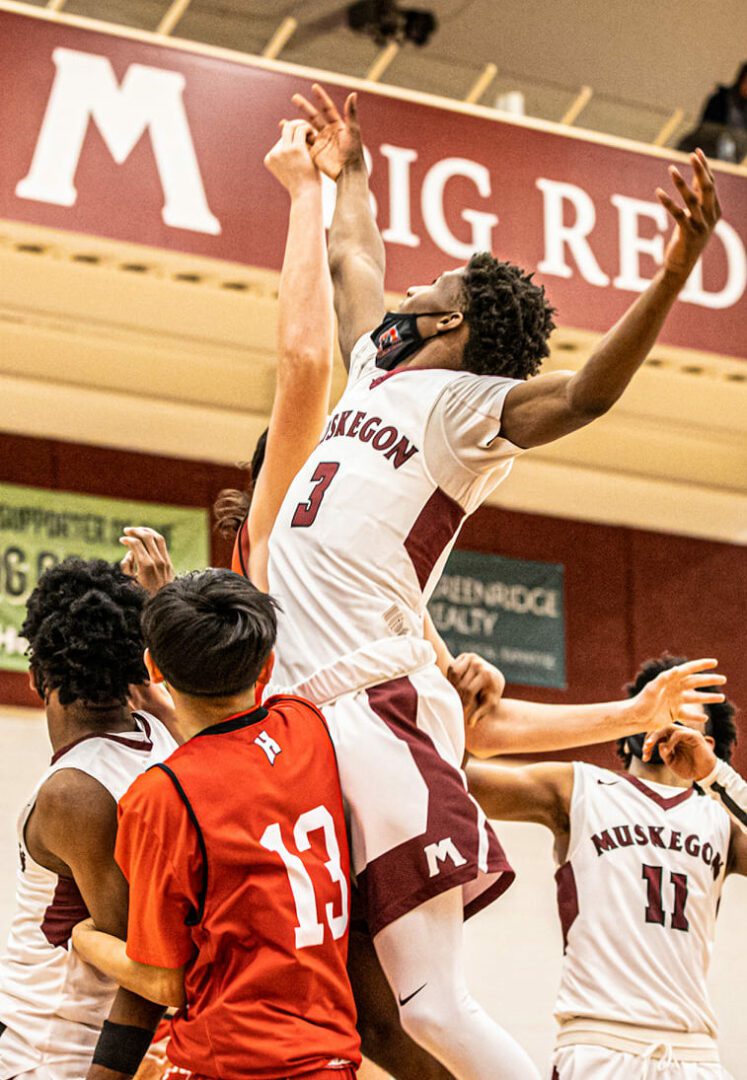 Kalil Stimage reaches up for a Muskegon rebound. Photo/Tim Reilly

The Big Reds improved to 10-3 overall and 9-1 in conference play.

“That’s our goal,” said Guy about wanting to continue the conference title streak, which dates back to his second season at Muskegon (2013-2014). “It means a lot to the guys who started the streak, and it needs to mean a lot to these guys in the locker room, as well.”

“We didn’t deserve to win the game, to be frank,” he said. “Holland did a great job. They played harder and smarter. Their coach coached better. We just didn’t do anything well. We didn’t have any energy and our focus just wasn’t there.”

Muskegon junior Ethan Hill, who had a good night with 12 points and 15 rebounds, echoed his coach’s sentiments. 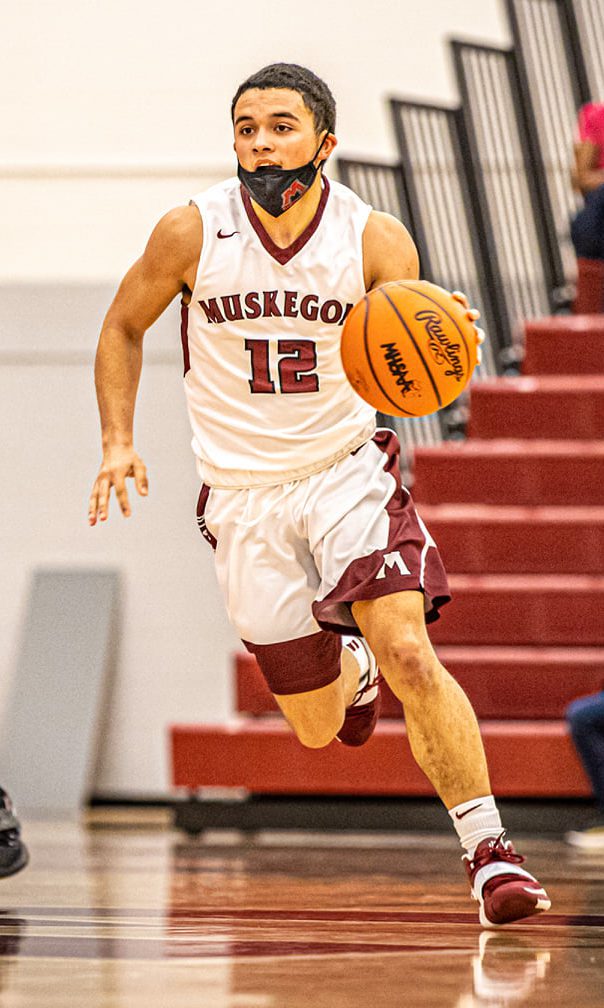 “It feels good, but we didn’t play our best,” he said. “We should’ve played better.”

In the first quarter, Muskegon jumped out to a 10-7 lead behind four points from Hill, who led all scorers in the first eight minutes.

“He’s a Division 1 basketball player if he plays every night,” said Guy about Hill’s potential. “He’s a nightmare (for opponents). He can shoot the three and post up. He can impact the game in so many ways, and he’s just starting to scratch the surface of that.”

Muskegon held Holland scoreless for the first five minutes of the second quarter, but didn’t take advantage offensively, only building its lead to 20-14 at halftime.

Guy was given a technical foul just one second into the second half, which spurred a Holland run that saw the Dutch tie the game 26-26 with 2:45 left in the third quarter.

The two teams traded baskets for the rest of the quarter and ultimately were tied 31-31 headed into the fourth. Jordan Briggs paced the Big Reds with five points in the third quarter.

Free throws from Hill, Anthony Sydnor III and Fredrick Hull put the game away for Muskegon in the final two minutes.

“It means a lot to me,” Hill said about his performance. “The coaches look for me to dominate the post and average a double-double.”

Holland fell to 3-7 overall on the season. The Dutch were led by Isiah Arredonda with 13 points and Xavier Chavis with 11.

Muskegon will travel to Wyoming on Thursday for another important O-K Green conference clash. 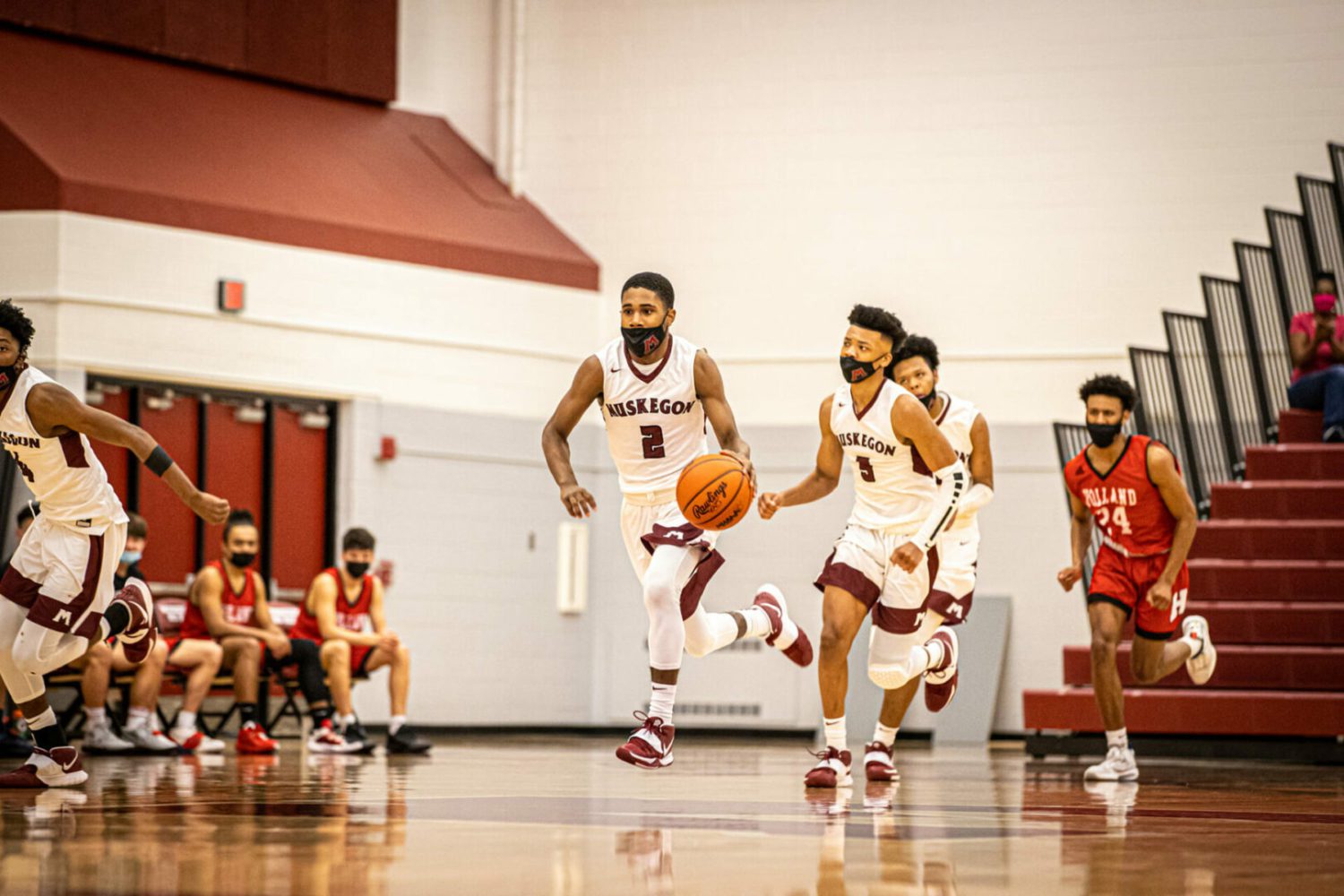 Jordan Brigs bring the ball up for Muskegon. Photo/Tim Reilly 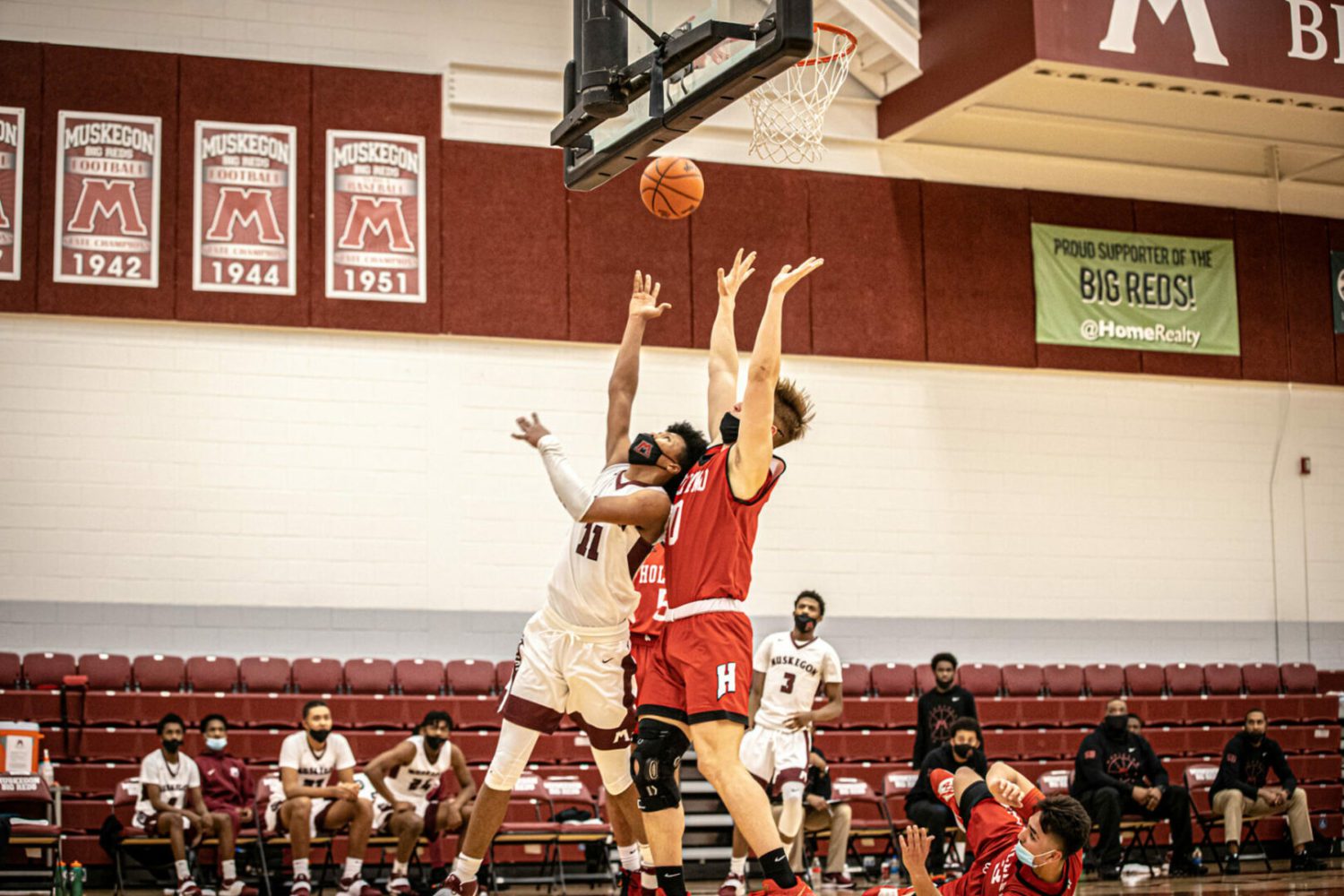 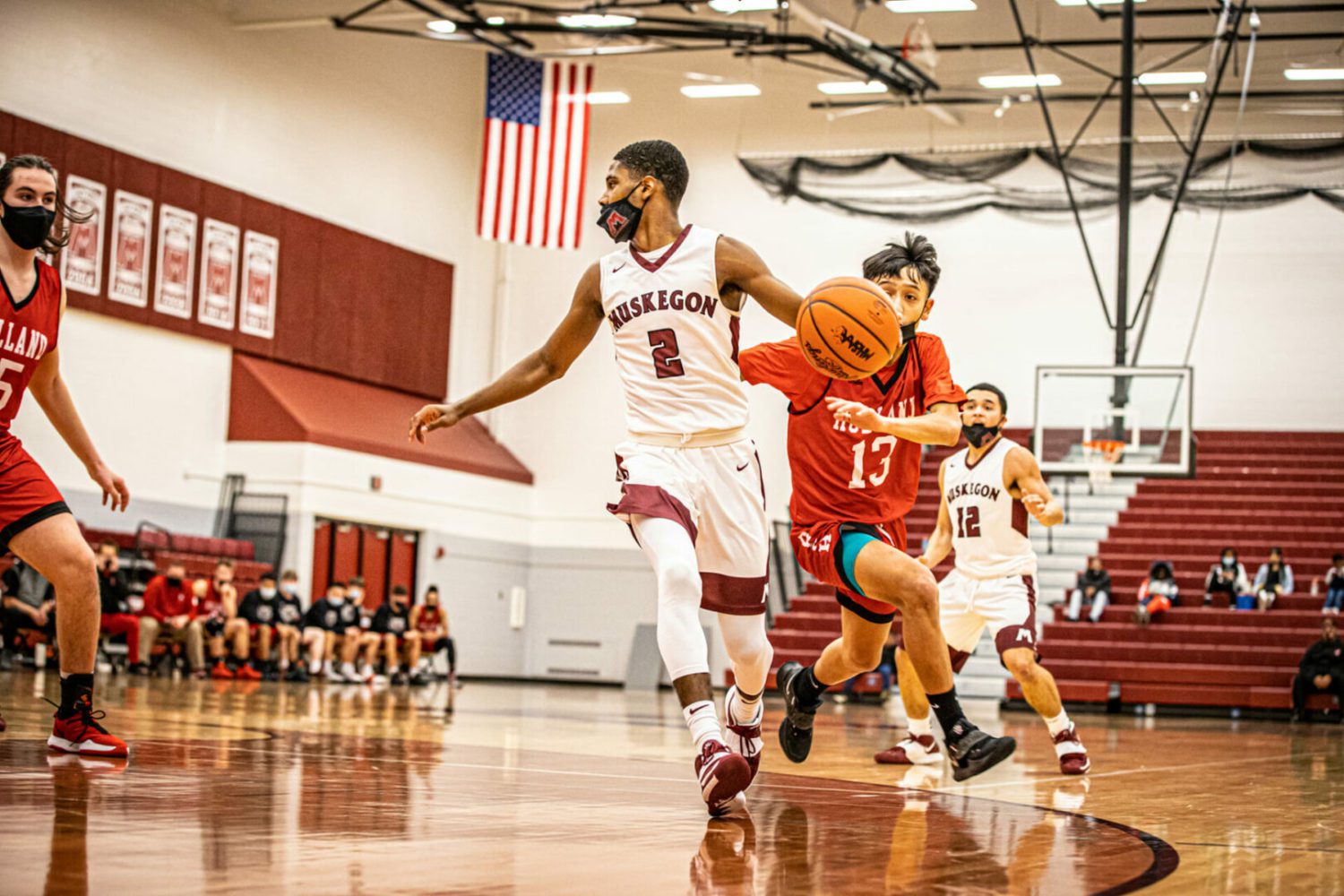 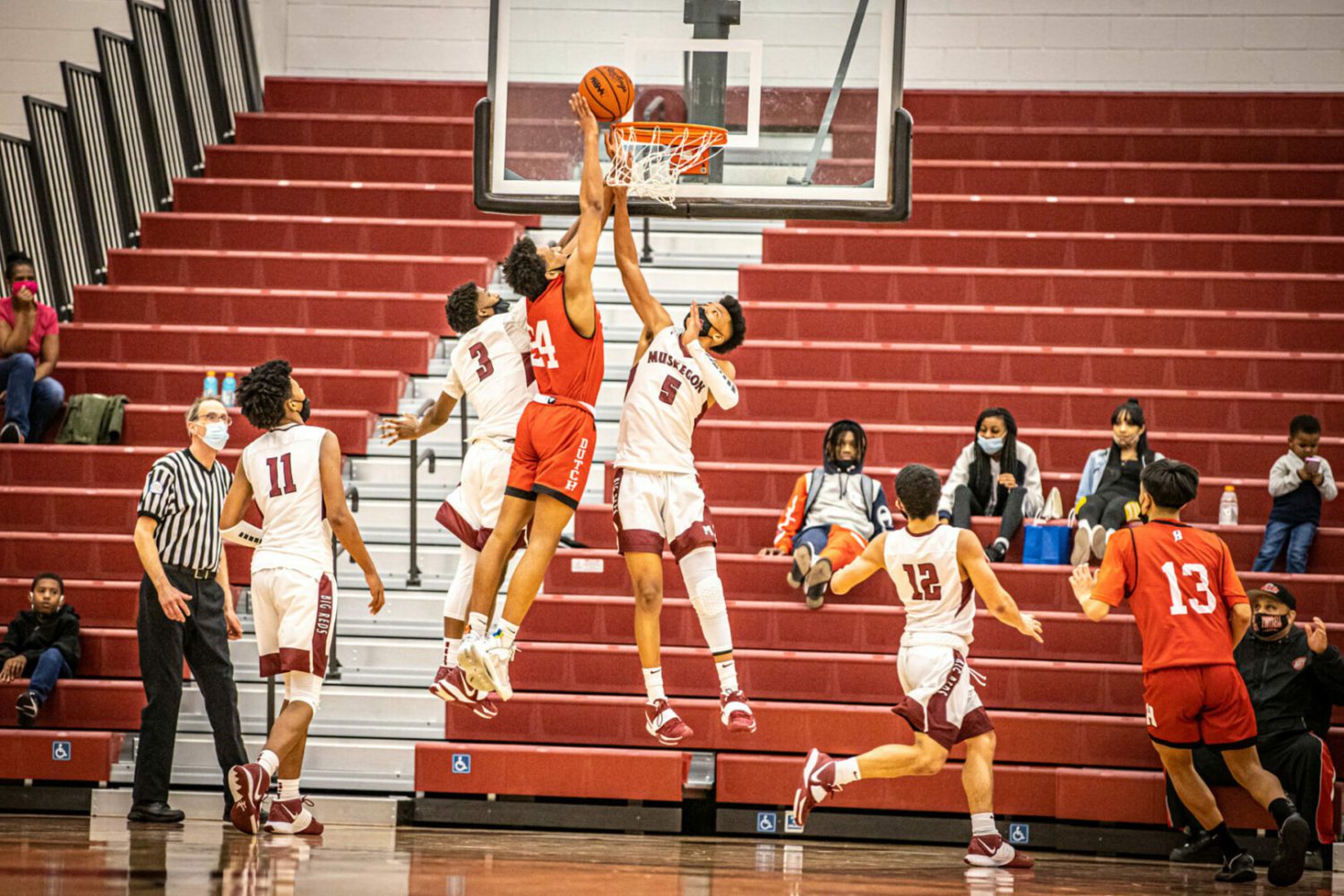 Muskegon’s No. 5 Maurice Said and teammate Kalil Stimage try to keep Holland away from the rim. Photo/Tim Reilly 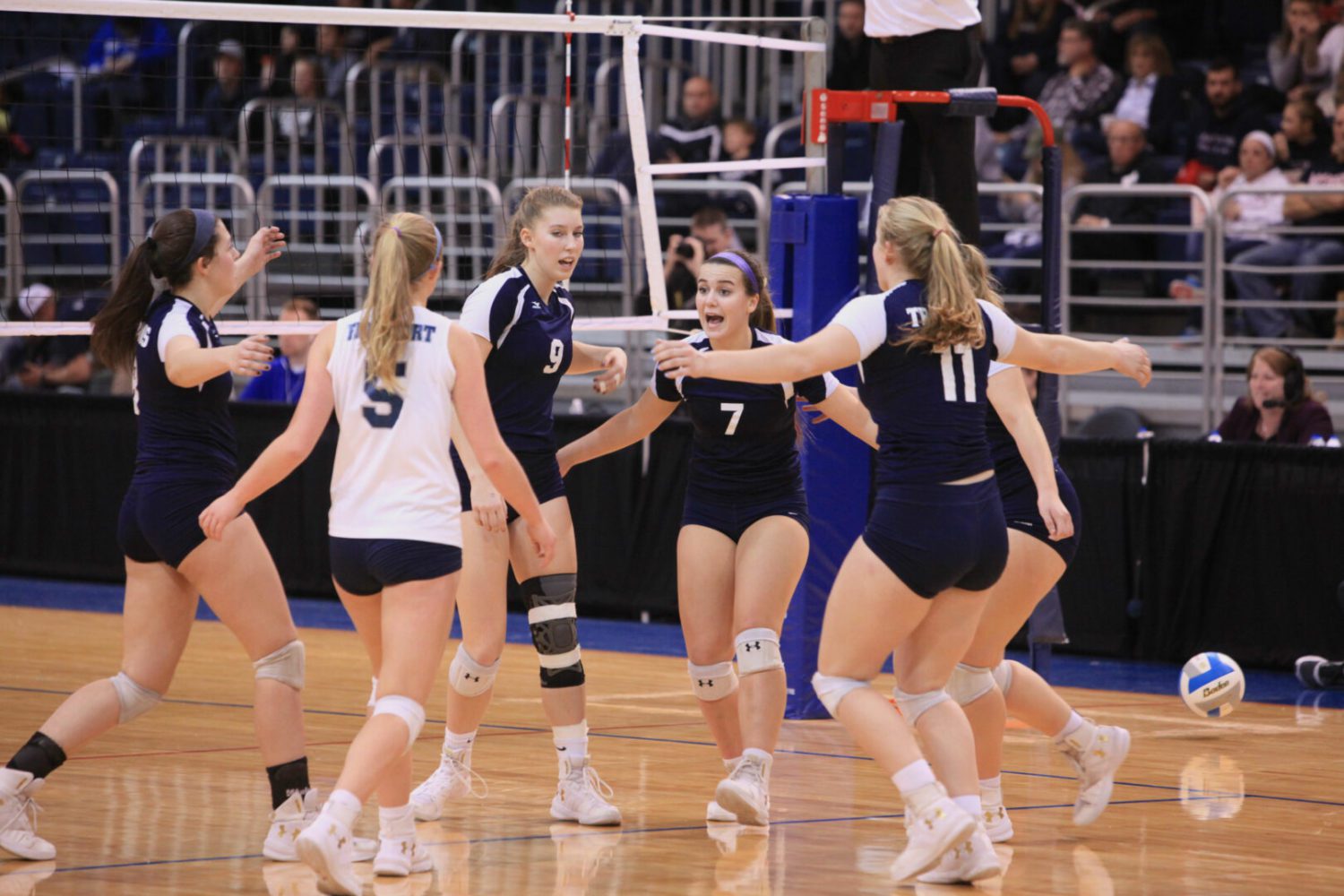