Western Michigan Chrsitain and Whitehall squared off for a non-conference battle Friday night. The Warriors came out on top, picking up a 58-46 win. 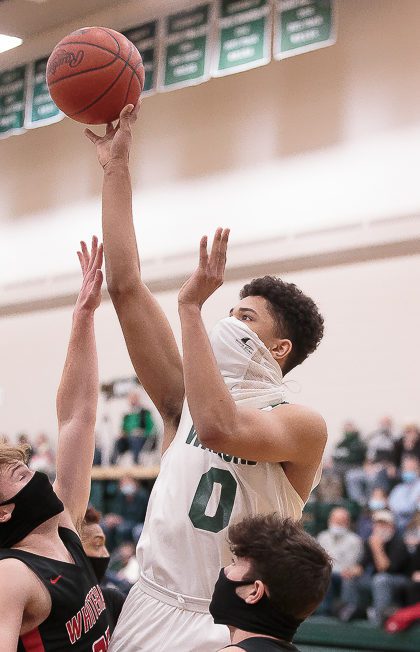 Owen Varnado gets a shot over the Whitehall defense. Photo/Randy Riksen

A balanced scoring attack led WMC to the win, with three players scoring at least a dozen points. Owen Varnado led the way with 14 points along with seven rebounds. Micah Terhaar added 13 and Isaac Parker scored 12.

The Crusaders trailed for most of the game with Zion leading 10-5 after the first quarter and 26-17 at the half. Muskegon Catholic began its comeback in the third, gaining a 13-7 edge to pull within 33-30 heading to the final frame. 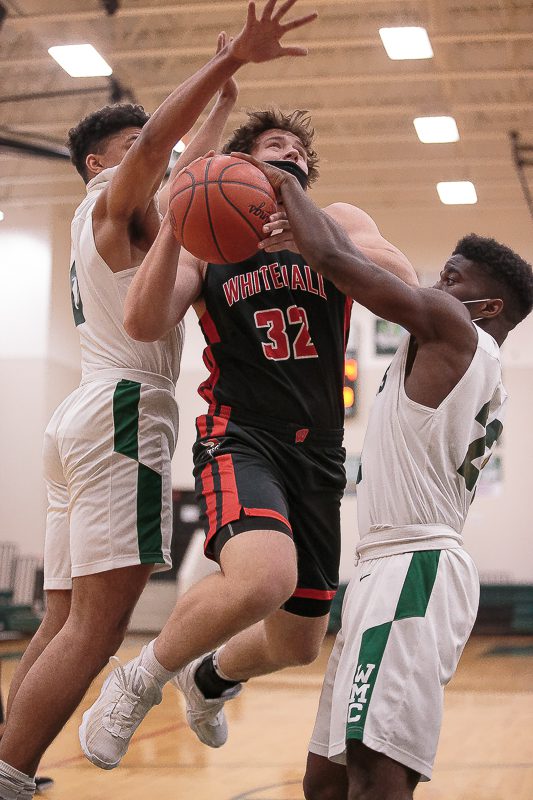 The Crusaders are now 3-6 on the regular season, including 0-4 in the Lakes 8 conference.

COOPERSVILLE 70, SPRING LAKE 44 — The Lakers kept within striking distance for the first half, but the Broncos offense took charge after halftime to pull away.

Sam Sheridan and Porter Saunders scored 11 points each to lead the Lakers, followed by Kaden George with 10.

Spring Lake falls to a 2-6 record in both overall and in the O-K Blue conference.

HOLLAND CHRISTIAN 60, FRUITPORT 34 — The Trojans hung tough for a quarter, but the Maroons pulled away for the win in the second half. Holland Christian led 10-9 in the first quarter, 23-15 at halftime, and 46-26 after the third.

Bode Anspach led the Trojans with 13 points on the night, followed by Carter Golden with 11.

Fruitport is now 0-10 for the season, with a conference record of 0-9. 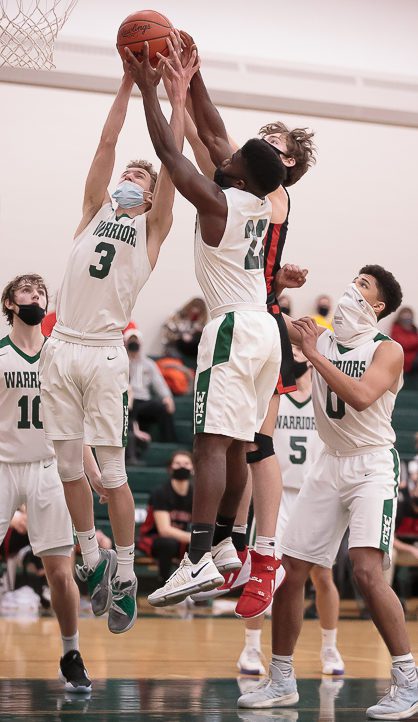 WMC’s Micah TerHaar goes up for a rebound with teammate No. 22 Joe Waller. Photo/Randy Riksen

NORTH MUSKEGON 61, SHELBY 54 — The Norse offense came out hot, nailing nine three-pointers in the first half to build an early lead. North Muskegon led the Tigers 21-9 in the first quarter, 37-19 at halftime, and 45-34 at the end of the third.

Logan Claeys scored 22 points to lead Shelby and Joseph Hayes put up another 20.

LUDINGTON 66, BENZIE CENTRAL 34 — The Orioles took an early lead against Benzie Central and never looked back Friday night. The Ludington boys lead 19-9 in the first quarter, 35-13 at halftime, and 52-28 at the end of the third. 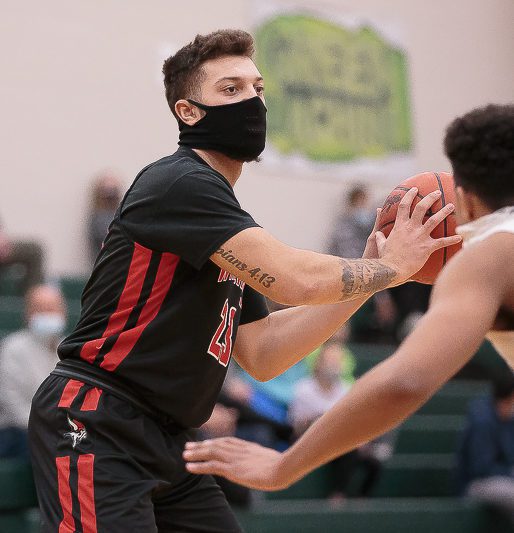 Ludington moves to 6-4 for the season, with a 3-3 record in the Lakes 8 conference.

FREMONT 80, HOWARD CITY TRI-COUNTY 49 — Braiden McDonald had a huge night finishing with 32 points, including 13 in the first quarter to help Fremont extend their winning streak to nine games.

McDonald also had eight rebounds, five assists and five steals, while Martin Curiel had 11 points and Joshua Zerfas had 11 assists to go along with five rebounds. All 11 players who were dressed for Fremont scored.

MORLEY STANWOOD 73, HESPERIA 32 – The Mohawks took the game away with an early lead against the Panthers, opening the first quarter with a 16-9 lead, moving to 27-11 at halftime, and closing the third quarter with a 53-21 advantage.

The Panthers are now 0-10 overall, with a 0-6 record in conference play.