FRUITPORT TOWNSHIP – Brad Richards won more than his share of district tournament trophies – seven, to be exact – during his time as a basketball coach at Fruitport Calvary Christian

But that was with the girls varsity team, which he build into a power over his 10-year tenure. 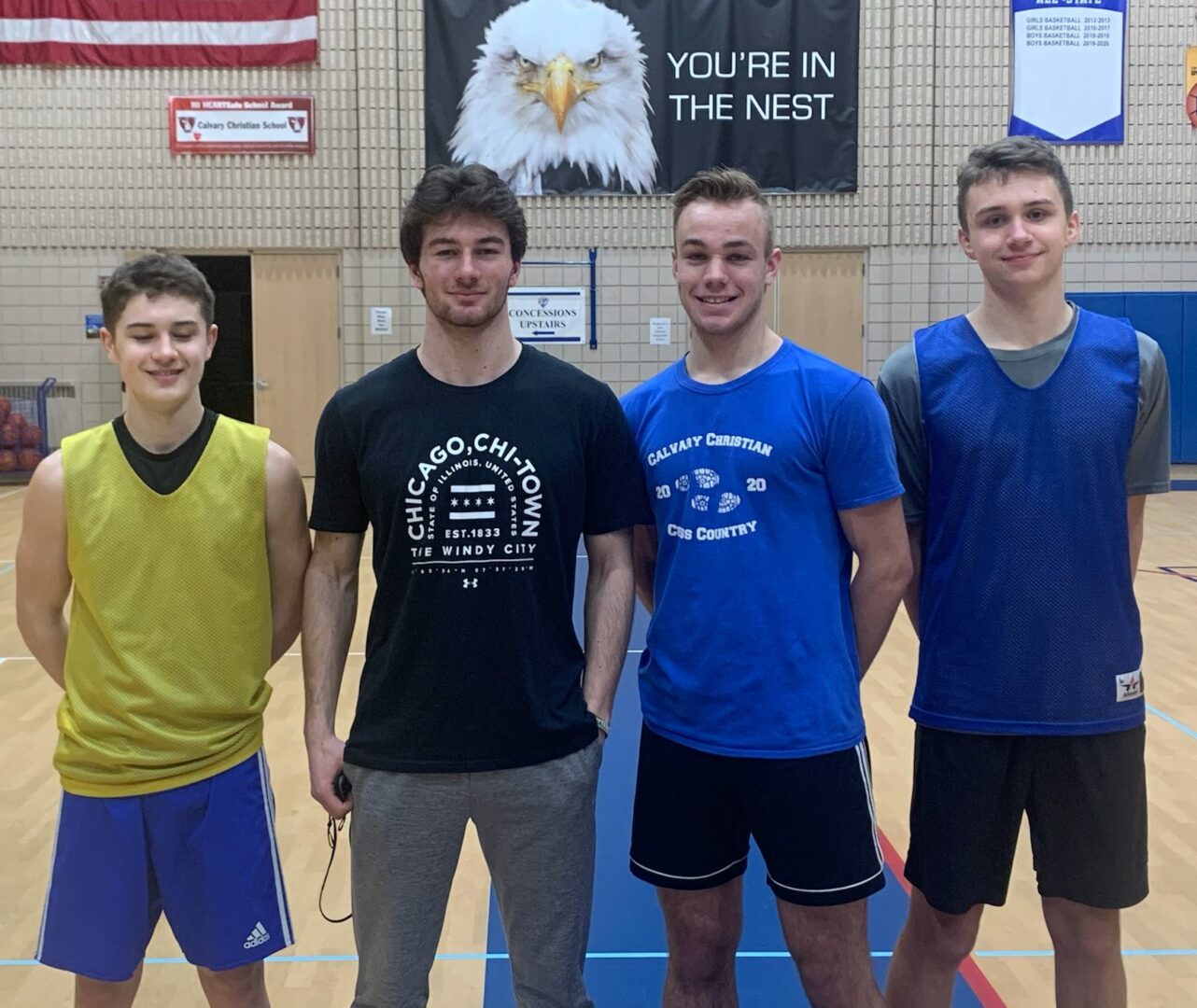 This year he took over the boys varsity squad, and nobody expected the team to compete for any trophies at all, at least for another year or two.

That’s because the Eagles have been pretty bad in recent years. Last season they only won two games, and they have not had a winning record since 2013.

It seemed like a slow rebuilding project, if there ever was one.

But Richards is not by nature a very patient coach. He doesn’t mind rebuilding, even if it means a few losses along the way, but he’s not interested in a long, drawn out project.

The result of that approach is obvious this season.

The Fruitport Calvary boys are no longer anyone’s doormat. They are 8-6 overall on the season with a 5-2 record in the Alliance League. They might have hit double-digit wins if the last two games of their season had not been cancelled.

Now they head into this week’s Division 4 district tournament with as much of a chance as anyone to win the trophy and move on to regionals. The Eagles will open against Holland Calvary Christian, a team they just squeaked past last week, on Tuesday at 5:30 p.m. If they win they will play the winner of Muskegon Catholic and Muskegon Heights in the finals on Thursday at 7 p.m.

The Eagles have come a long, long way in the short time since practice began in late January. 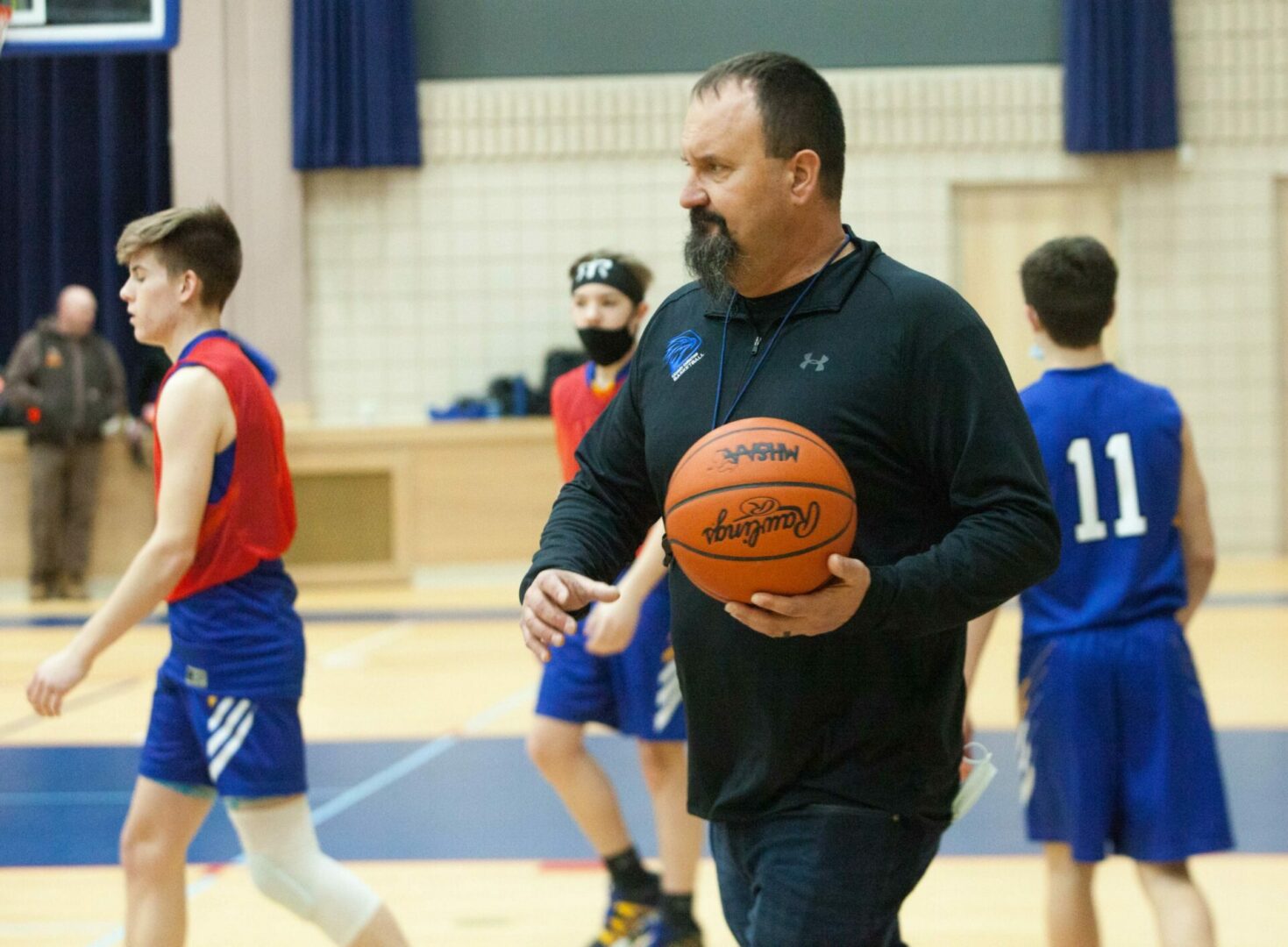 “It was just a mismatch of confused ideas and good kids,” said Richards about what he found in those first practices. “It didn’t look like anybody wanted to get a rebound or understood what the word meant. Passing was kind of a last resort, and we didn’t have any defensive concepts.

“But give the kids credit. They soaked up what (assistant coach) Jim Warren and I taught them like a sponge, and now they are a team that can compete next week. There are four teams that could win this district, and I know my boys will come out fighting.”

The Eagles’ potential actually became obvious in their very first game, against Muskegon Catholic Central, a team it had never beaten before. The game wasn’t pretty, because teams across the state were only allowed one full-contact practice before the season begin, but Calvary pulled off the upset, 66-52.

It was Calvary’s very first victory over Muskegon Catholic in any boys sport.

“That first game told me the kind of character our kids had inside,” Richards said. “Catholic closed the gap and our kids kept fighting. It was a character win. That’s what gave us the most hope.”

The opening game win was followed by two pretty ugly losses, and it looked like things might be back to normal for the Eagles. But then they put up two straight wins, over Byron Center Zion Christian (65-44) and Hesperia (87-30), then two more wins over the next three games. 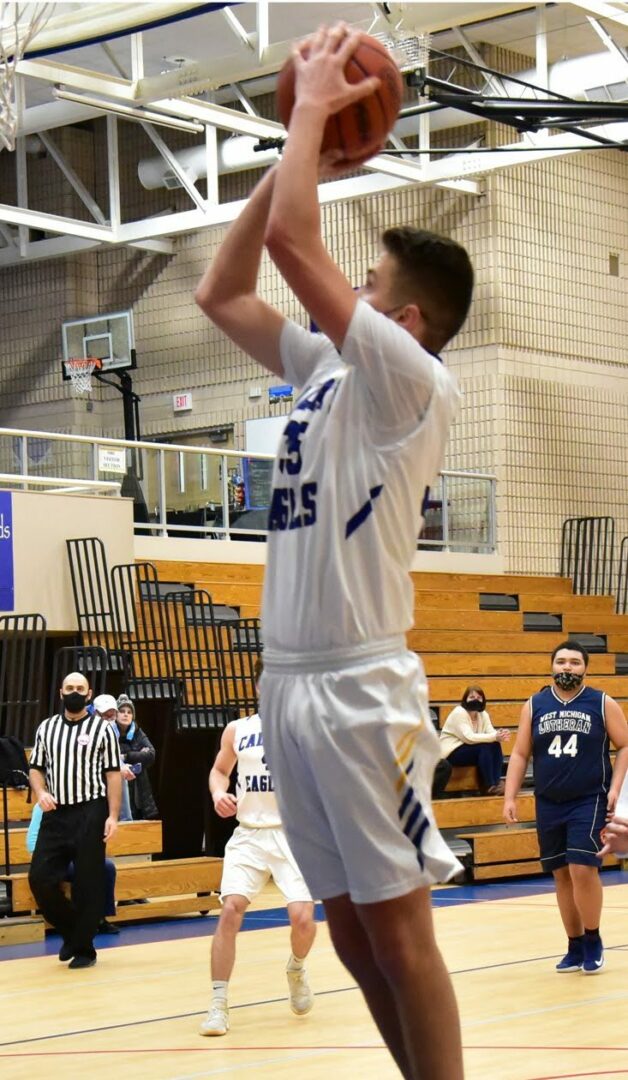 Bradley Richards goes in for a close shot for Calvary. Photo/Kelly Walker

They were supposed to play two more games, but decided to cancel them, out of fear that being exposed to COVID could result in the team having to miss the district tournament. That happened to the Fruitport girls basketball team, and the Eagles didn’t want to risk it.

“I asked the boys, would they rather have the disappointment of not playing this week, or miss the opportunity to play for a district title next week,” Richards said. “We didn’t want to go through that.”

The team’s two top scorers didn’t seem like very likely candidates to excel at the beginning of the season.

The top scorer has been Bradley Richards, the coach’s son, who is only an eighth-grader. He’s on the roster because tiny schools like Fruitport Calvary are allowed to have middle school kids on varsity.

Richards is already 6-foot-5, but it seemed probable that such a youngster would take time to grow into his large frame and have growing pains at the varsity level.

But he followed the example of his three older sisters, who all became varsity standouts in the eighth grade. He’s currently averaging 17 points and 11 rebounds per game, and should just keep getting better and better over the next four years.

“I was just hoping to make a few shots here and there and do my best,” he said.

The second-leading scorer, senior Braden Cohea, knows a little bit about winning. He attended Mona Shores High School until transferring over to Calvary last fall. He was a member of the 2019 Mona Shores state championship football team and the 2018 state runner-up squad, but had not played basketball since middle school.

Cohea transferred to Calvary because his father became the band director at the school, and figured he might as well give hoops a try, since Calvary has no football team. He has taken to the sport very well, to say the least, averaging 14 points and eight rebounds per game.

Having played for Mona Shores head football coach Matt Koziak, who is known for his intense approach, and now Coach Richards, he said there are a lot of similarities. 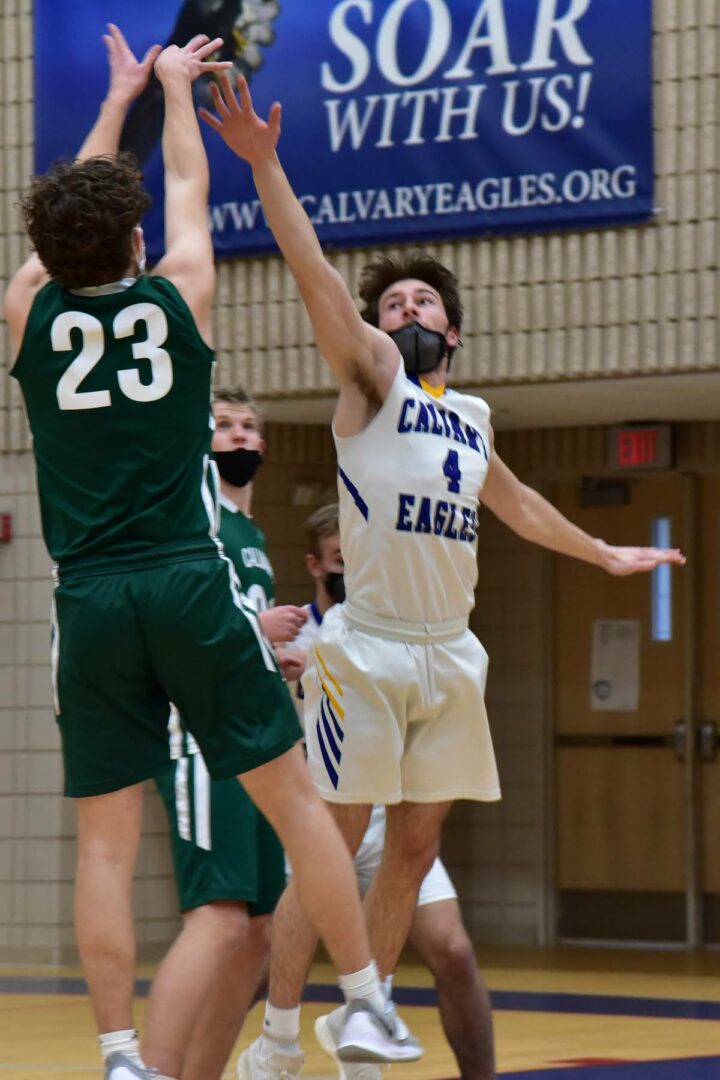 Braden.Cohea goes to block a shot on defense for Fruitport Calvary. Photo/Kelly Walker

“I’ve talked to a lot of people about that,” Cohea said. “They are very similar in a lot of ways. They’re both crazy passionate about what they do, and they will both do everything they can to put their guys in a position to win. I love both of them.”

Two other statistical leaders on the team are junior point guard Jacob May, who averages six assists per game, and junior forward Ethan Cammenga, who is averaging eight rebounds per game.

May and Cammenga were both on the team last season. They say the players got together in the offseason, including the long COVID shutdown when gyms were closed, to practice and improve. But they also say Coach Richards and his intense style made a big difference this season.

“Right at the beginning it was pretty much of a shock to see how intense he was right away,” May said. ”Once practice started it was full blast.  It took some getting used to, but it really helped us develop as players. I took a lot of whacky shots last season, and he helped me fix that.”

“I’ve been watching (Coach Richards) for five or six years, so I knew it would be different this season,” said Cammenga, who is in his fourth year on the team. “He raises the intensity during practices, and each player strives to be better, because nobody wants to be called out. He calls us out to make us better players, and it’s been really helpful.”