Gushchin picks up a hat trick, including two goals in a huge third period, to help Lumberjacks rally past Chicago 7-5

MUSKEGON – This is why the Muskegon Lumberjacks were so eager to get Danil Gushchin back on the ice.

That’s exactly what happened on Saturday night, when the Lumberjacks rallied from a two-goal deficit and scored four times in the third period to claim a thrilling 7-5 victory over the first-place Chicago Steel at Mercy Health Arena.

Gushchin, in only his second game back after missing seven games with an injury, was the star of the evening, netting a three-goal hat trick, with two of his goals coming during the crucial third period when the Jacks needed a big lift.

Gushchin scored his first goal in the second period to pull the Lumberjacks within one of the Steel. He scored his second goal early in the third to tie the game at 4-4. Then he scored the game-winner with 8:33 left in the contest, completing the inspiring Lumberjacks comeback.

Muskegon has now won five of its last six games. 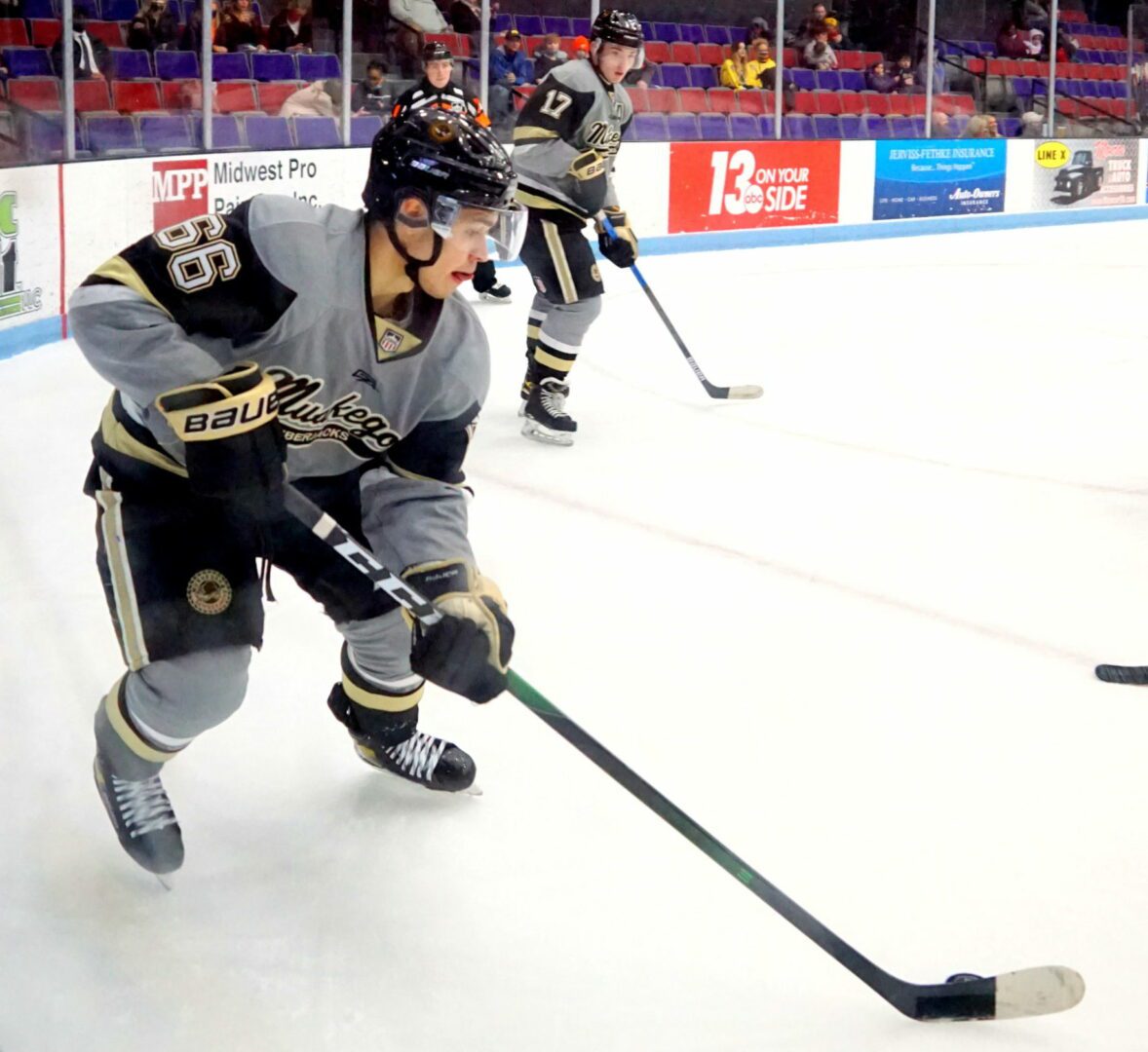 Danil Gushchin handles the puck in the corner for Muskegon. Photo/Leo Valdez

“He kind of put us on his back when we went through a couple rough times and got us going,” said Lumberjacks Coach Mike Hamilton about his star forward. “That game could have gotten away from us, and it was good to see the guys stay with it. That was a big win for us.”

Guschin, a Russian who is still working on perfecting his English, was all smiles after the game as he fielded reporters’ questions.

“It is not just me,” said Gushchin, who now has 20 goals on the season. “If it wasn’t for my partners, I could not score so I am thankful for my teammates.

“I just tried to keep myself going after the second period. And I tell my linemates and team to go and scores some goals. I know if I do some moves I could help the team score. It was a good win for the team.”

Muskegon, the second-place team in the USHL’s Eastern Conference, improved to 22-12-3 on the season, good for 47 points in the standings. Chicago dropped to 25-9-3 with 53 points.

The victory was important in the conference race, because the Jacks are now just six points behind Chicago with 17 regular season games to go. They’ve been chasing the Steel for several months, but still have a chance to overtake them and win the conference title.

A loss would have left the Jacks a full 10 points out of first place.

The win might have been even more important mentally for Muskegon, following Friday night’s disappointing 6-3 loss to the Steel at home. With the playoffs right around the corner, a Chicago sweep in Muskegon would have given the Steel a mental edge heading into the most important part of the season.

Instead the Jacks reminded themselves they can still beat the high-flying Steel, as evidenced by their 5-3 overall record against Chicago this season. 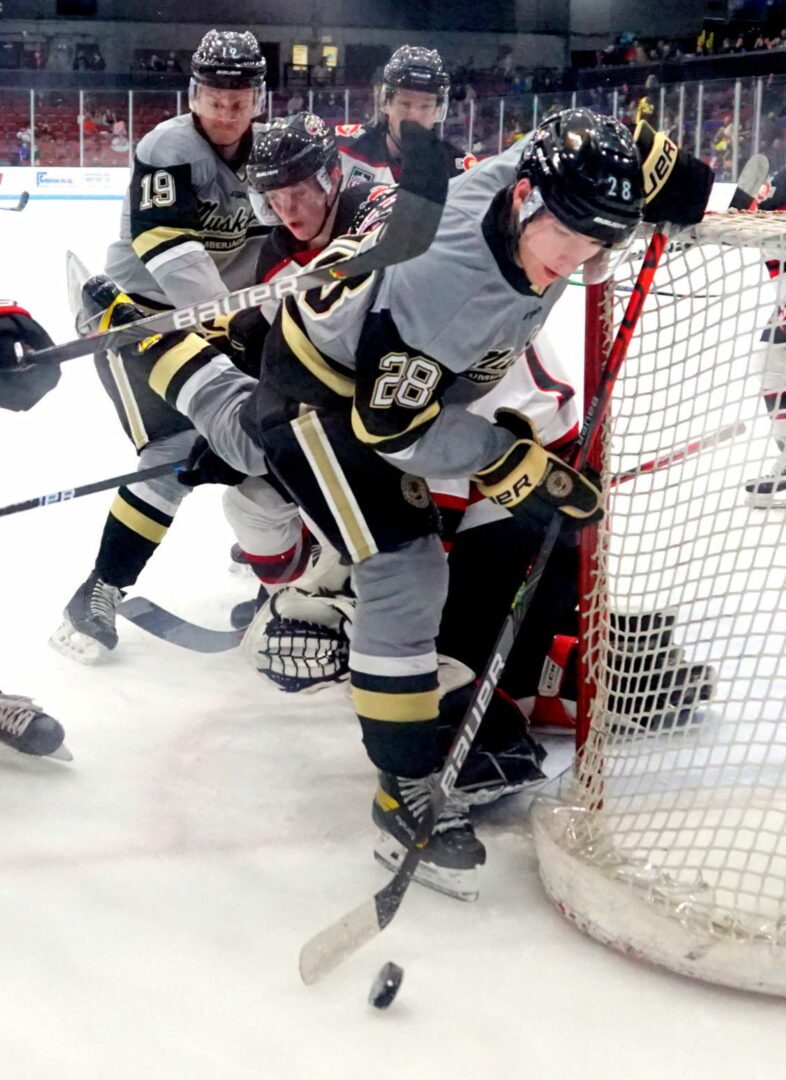 Quinn Hutson battles for the puck next to the Chicago net. Photo/ Leo Valdez

“We beat them two out of three the last series, but we did that with a lot of their guys out of their lineup,” Hamilton said.  “They were probably thinking they had their team back and they were fine. Last night they were the better team.

“But we have a lot of guys who have played in this league for a lot of years, so there is some good  leadership there. It’s not us (coaches) coming in and kicking tires and throwing garbage cans. It’s having guys that get themselves going.”

The first two periods, which had their share of penalties, didn’t go so great for Muskegon.

Chicago’s Mackie Samoskevitch opened things up with a power play goal at the 13:42 mark of the first period, giving the visitors an early edge. Muskegon’s Nick Portz answered with his 12th goal of the year about four minutes later, before Chicago’s Jack Harvey scored at 17:46 to make it 2-1 at the first break. 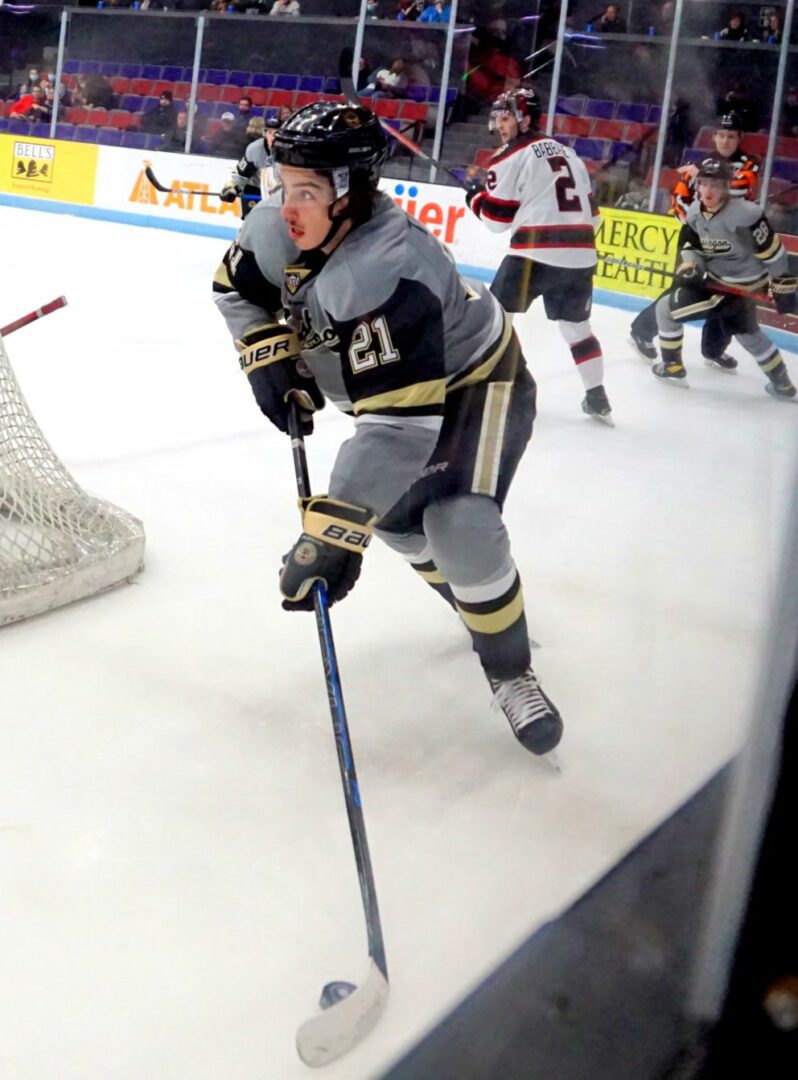 Muskegon’s Brad Marek buried a close-range backhand shot 1:11 into the second period, tying the game 2-2. Then Chicago turned up the offensive jets, getting a goal from Josh Doan at 12:53 and a power-play goal from league scoring leader Matt Coranado at 13:45, giving the Steel a daunting 4-2 edge.

That’s when Gushchin got hot.

He broke in alone on the Chicago goal with about five minutes left in the second period and put a shot from the right circle between the legs of Chicago goalie Jack Stark, cutting the Steel lead to 4-3 at the second intermission.

Guschin evened the score at 5:36 of the third period when he skillfully stickhandled his way through a crowd in the Chicago zone and scored on a beautiful backhand shot, tying the game 4-4.

Chicago regained the lead just 33 seconds later with a goal by Shawn Farrell, then Muskegon tied things up again on a long floater shot from the right circle by Hank Kempf, leaving the score 5-5 with about eight minutes left to play.

Guschin completed his hat trick with the game-winning goal at the 8:33 mark, scoring on a long shot from about the same spot where Kempf scored. Then Cristian Tellier nailed down the victory with an empty-net goal with 17 seconds remaining.

While he gave up five goals, Lumberjacks goalie Nate Reid definitely earned the victory between the pipes, making numerous great saves throughout the contest to keep the Steel from pulling away. Reid had a busy night, with Chicago outshooting the Jacks 33-22, including 18-8 in the second period.

Grand Haven girls roll past Union, will face Reeths-Puffer in Class A semis