GRANDVILLE – Good shooters, like the ones that fill the Kent City girls basketball roster, know that if they keep getting good looks, their shots will eventually start to fall.

And once they do, opponents are in trouble. 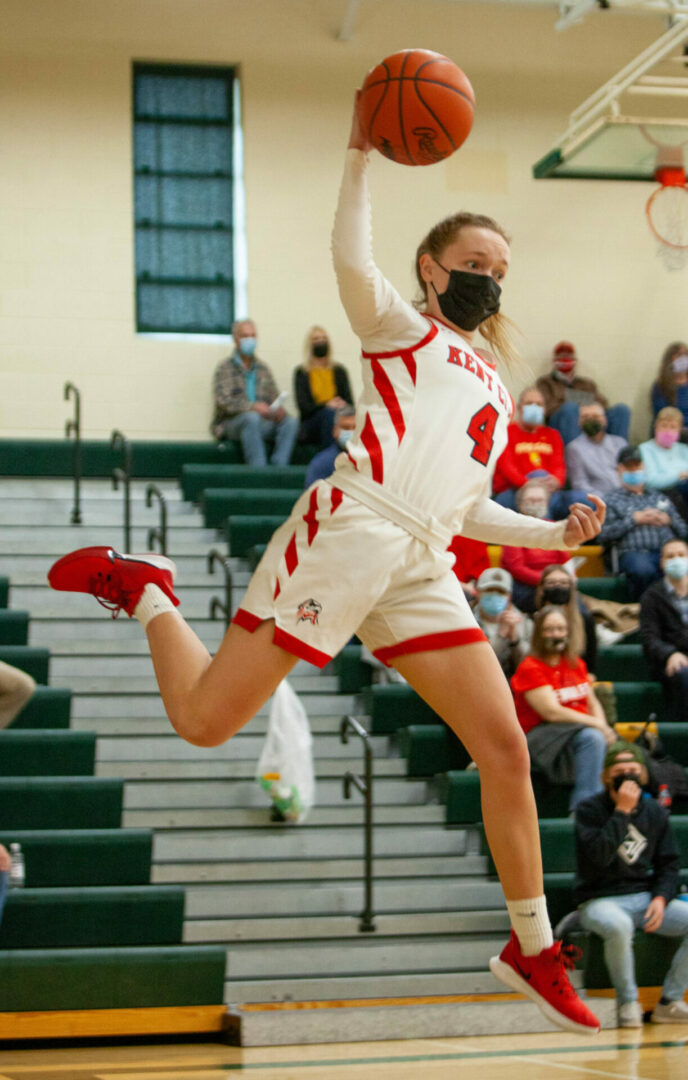 Jenna Harrison goes to save the ball for Kent City. Photo/Jason Goorman

The Eagles took a while to get rolling in their Division 3 regional semifinal against Western Michigan Christian on Monday night, but once the Eagles’ long-distance shots started going in, there was no stopping them.

Kent City broke open a one-point game late in the third quarter with a barrage of three-pointers and pulled away for a 53-37 victory at Calvin Christian High School and a berth in Wednesday’s regional finals.

“It definitely took a minute, our shots weren’t falling at first,” said Kent City senior Kenzie Bowers. “But really once we opened up in the second half, we were going and really couldn’t miss for the most part. 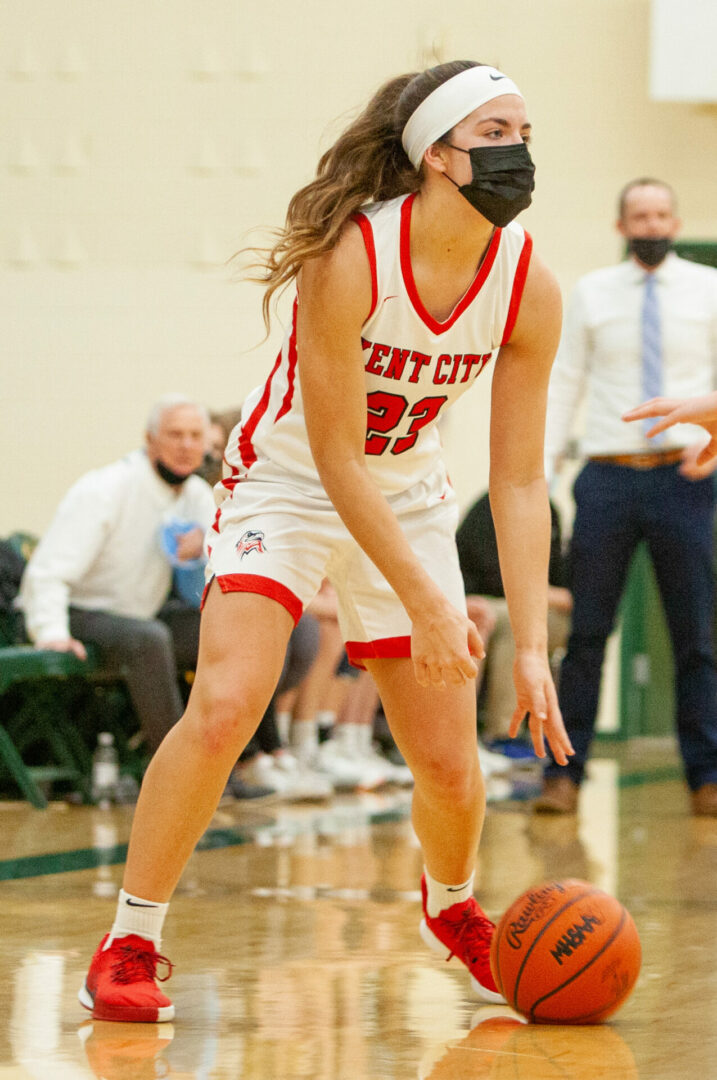 Kenzie Bowers sets up a play from the outside for Kent City. Photo/Jason Goorman

The Warriors were giving Kent City all they could handle, trailing just 25-24 with 1:35 left in the third quarter. Then Kent City suddenly caught fire. The Eagles connected on six triples – by four different players – in the next three minutes, and the 18-4 run put the game out of reach for WMC.

“It’s nice to have players that can put the ball in the basket,” Eagles coach Scott Carlson said of his group of sharpshooters. “We had great shots all game and they didn’t fall for a while, in the first half especially. But we just said it’ll even out, and it did. They hit them at the right times. It was great to see.”

Kent City remains perfect on the year with an 18-0 record, and moves on to the regional final to face Grand Rapids Covenant Christian, a team they beat 56-36 earlier this season.

The Eagles are no stranger to this stage of the season, and hope this can be the year they have a deep tournament run.

The Warriors ended a great season with a 17-2 record. Coach Jeremy Goorman said he was proud of his team’s effort all year.

“Great things have to come to an end,” he said. “I can’t be prouder of these girls, how much they’ve improved, how well they came together and played together. I think it’s probably one of the best teams we’ve had at Western Michigan Christian.”

Offense was hard to find early, with neither team connecting on a field goal for the first 3:52 of game action. Kent City led 9-6 after the first quarter, thanks to a pair of triples from Jenna Harrison, who stayed on the floor after picking up two fouls in the opening minutes. 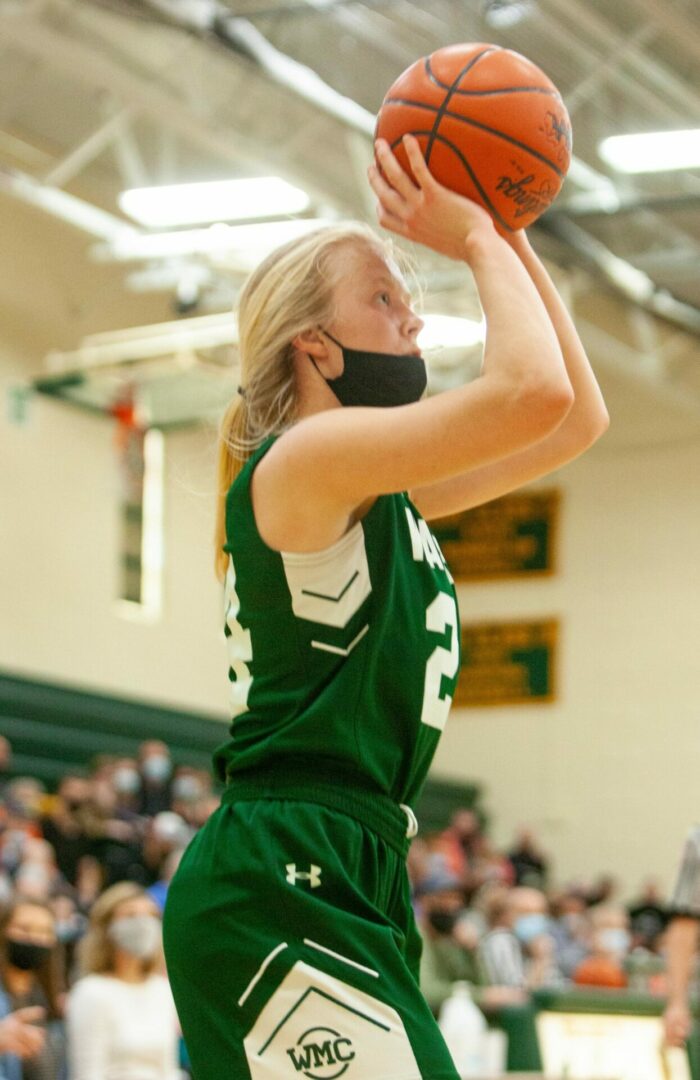 Taylor Folkema takes a shot from the corner for WMC. Photo/Jason Goorman

Kent City extended its lead to 17-10 midway through the second quarter, but the Warriors responded with a 6-0 run to end the half, making the score 17-16 at the break.

The teams traded baskets through the opening minutes of the third quarter. A basket from Kyla Wiersema brought WMC within 25-24 with 2:42 left in the third, but that would be as close as the Warriors would get the rest of the night.

About a minute later, Lexie Bowers connected on a three to ignite the big Kent City run. The scoring stretch included two threes from Harrison and one each from Kenzie Bowers, Lexie Bowers and Maddie Geers and stretched the score to 45-28.

“We gave Kent City a little bit of a run and I think we ran out of gas,” Goorman said. “We did a great job for probably two-and-a-half quarters. But then all of a sudden they get one look and knock it down, they get a little confidence. That’s how shooters are. And eventually one turned into two, two turned into three.”

Following the three-point barrage, the Eagles slowed the tempo, forcing WMC to foul to extend the game. Kent City made enough free throws and continued its pressure defense to hold any potential comebacks at bay.

“We’ve got some great defenders,” Carlson said. “They play hard, they play with intensity. There’s no quit in them. I thought they did a great job with that.”