Montague girls basketball team gets even with Spring Lake, remains unbeaten, with a 60-38 victory in D2 district semifinals

Last year the Wildcats won the West Michigan Conference and were hoping for a long postseason tournament run, but were upset by the Lakers in the district championship game. 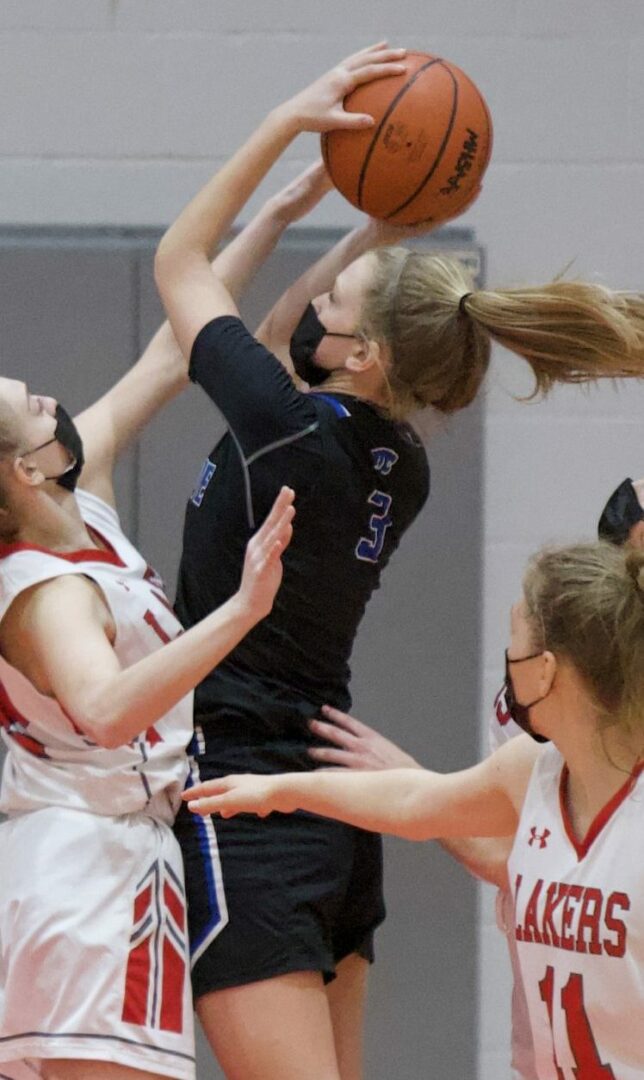 Andie Zamojcin goes up in the lane for Montague. Photo/Kelly Gates

Montague, undefeated this season, took some revenge on Spring Lake on Tuesday, rolling to a 60-38 win on the Lakers’ home court in a Division 2 district semifinal game.

“We learned from our mistakes last year, they remember what that felt like, as well as realizing we’re a different team,” said Montague Coach Cody Kater, whose team is now 15-0 on the season. “We made sure we had no regrets after the game.”

The game started off slowly, with each team playing strong defense inside, and Montague led 11-6 at the first buzzer.

The defensive intensity continued in the second quarter, with only a Spring Lake free throw added to the scoreboard until Montague’s Emma Flynn hit a triple with 4:35 remaining.

Spring Lake answered with back-to-back three-pointers to pull within one point, then Montague’s Braquelle Osborne and Claire Meacham each hit buckets and the Wildcats went to halftime nursing a 20-15 lead. 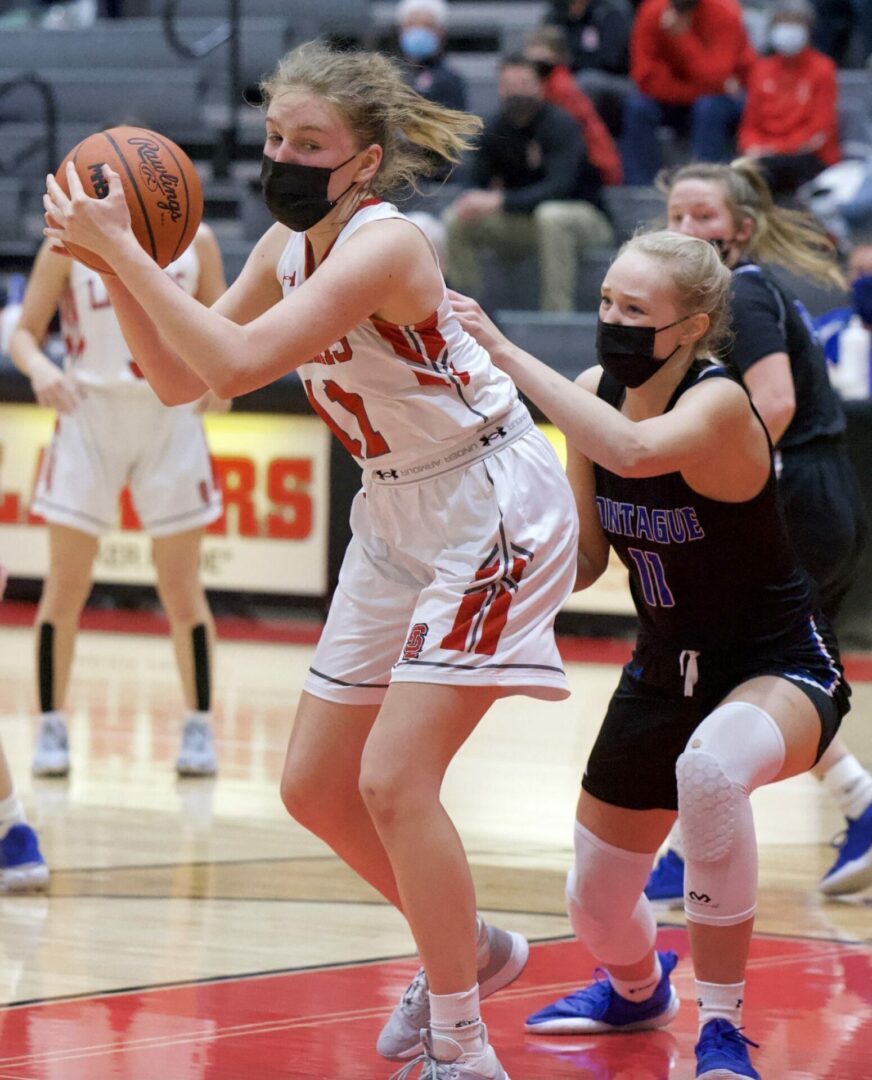 Zoe Walters gets the ball in the post against Montague’s No. 11 Allison Hall. Photo/Kelly Gates

“At the beginning of games we’ve been kind of sluggish as of late,” Kater said. “Because of our height, we should be owning every rebound, and we’re still lacking a bit there.”

Spring Lake made it a one-point game on a Jennifer Judge layup just seconds into the third quarter. The teams traded baskets until Montague freshman Kendall Osborne nailed a three-pointer, then converted a three-point play on the next possession, giving her team six straight points and a 30-23 lead.

“We’ve been preaching to her these last few days to really own this moment as a freshman, get her name out into the area, and she definitely came through for us tonight,” Kater said of Kendall Osborne, who led the Wildcats in scoring with 15 points.

After a turnover, Meacham hit a bucket for Montague, was fouled and missed the free throw, but the Wildcats grabbed the offensive rebound and kicked it out to Braquelle Osborne, who nailed a three-pointer to make it 33-25. The third quarter ended with Montague leading 37-29.

At the start of the fourth, Judge hit a three for Spring Lake before Kendall Osborne answered with a triple of her own on the next possession. That jump-started a decisive 13-2 run for Montague, with clutch shots made by Kendall Osborne, Flynn, Ally Hall, and Meacham.

Montague outscored the Lakers 23-9 in the fourth to seal up the victory.

“In these last few games we went on cruise control, not competing at a level we were capable of, and tonight they really answered the bell,” Kater said about his players. “We were getting clean rebounds we knew we could get, and everyone was getting open as well as finishing around the hoop really well.”

Claire Meacham added 13 points for Montague. Jennifer Judge led the way for Spring Lake with 12 points while Meah Bait followed that up with 10. 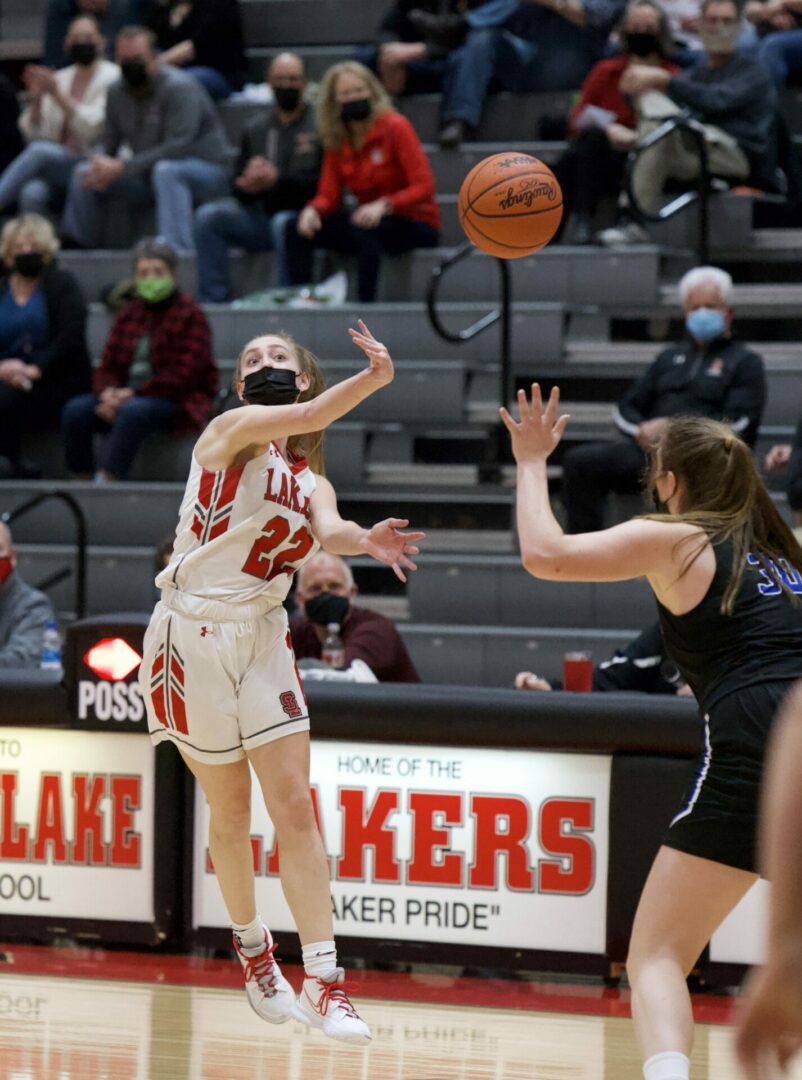 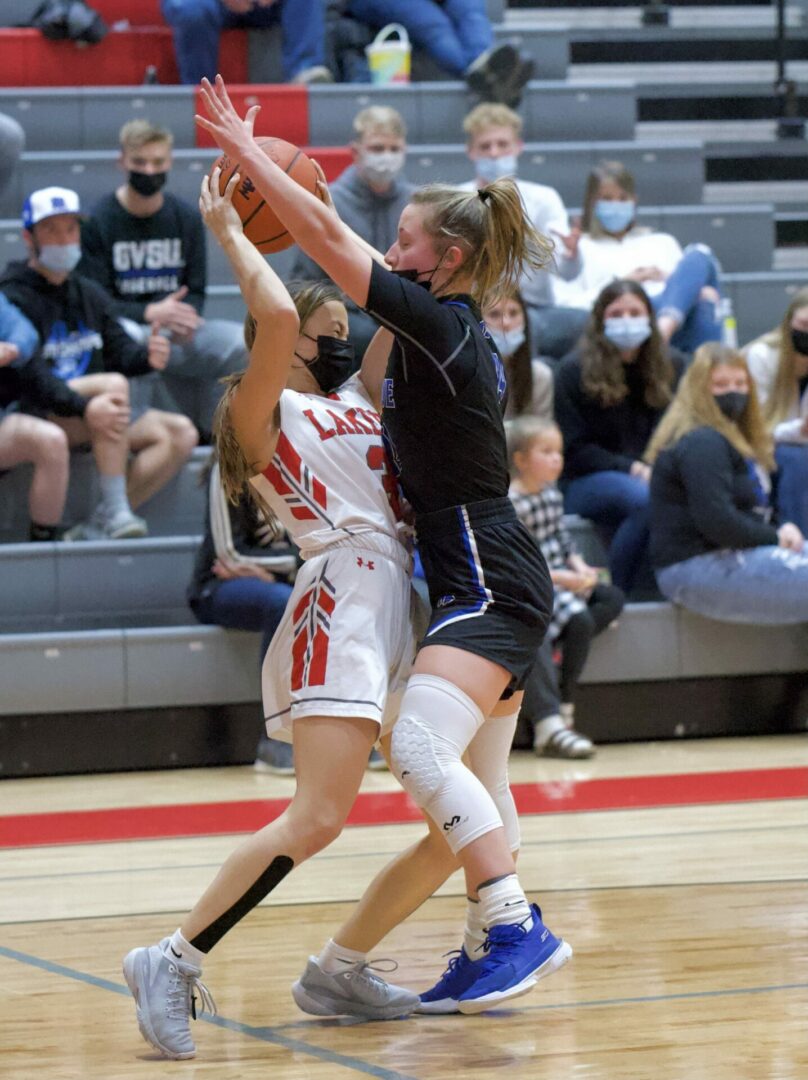 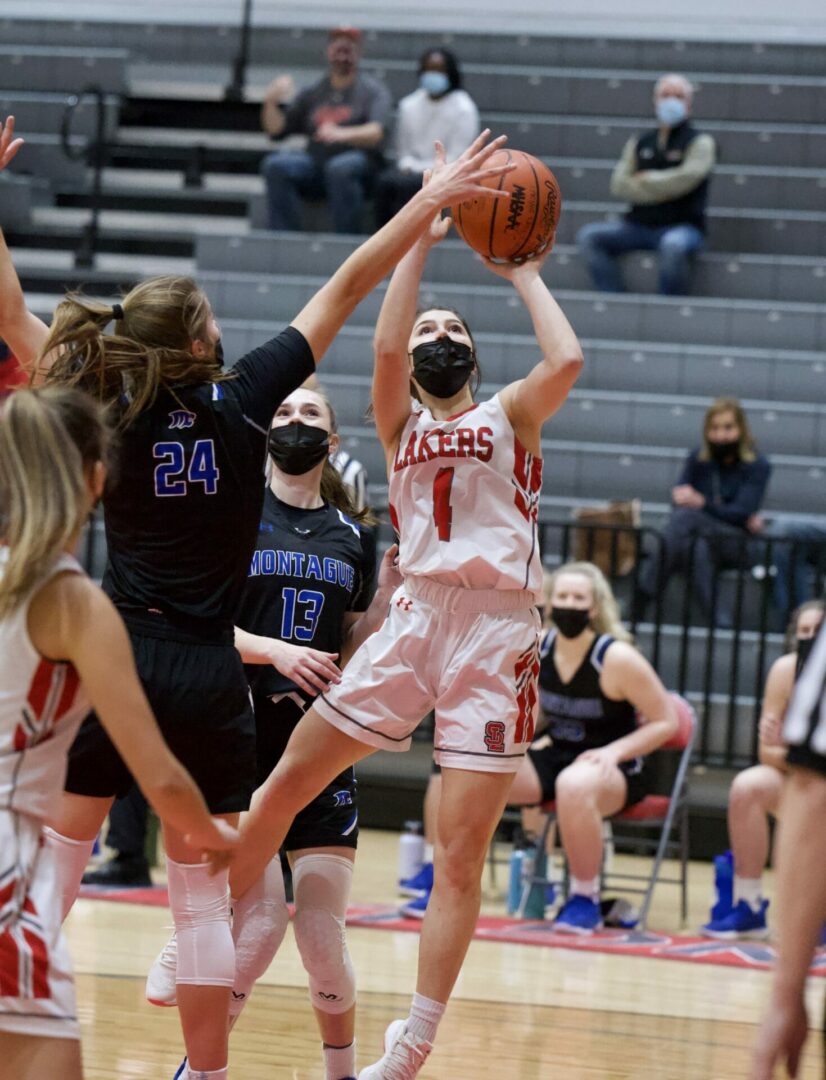 Meah Bajt goes up for a shot over Montague’s No. 24 Kendall Osborne. Photo/Kelly Gates 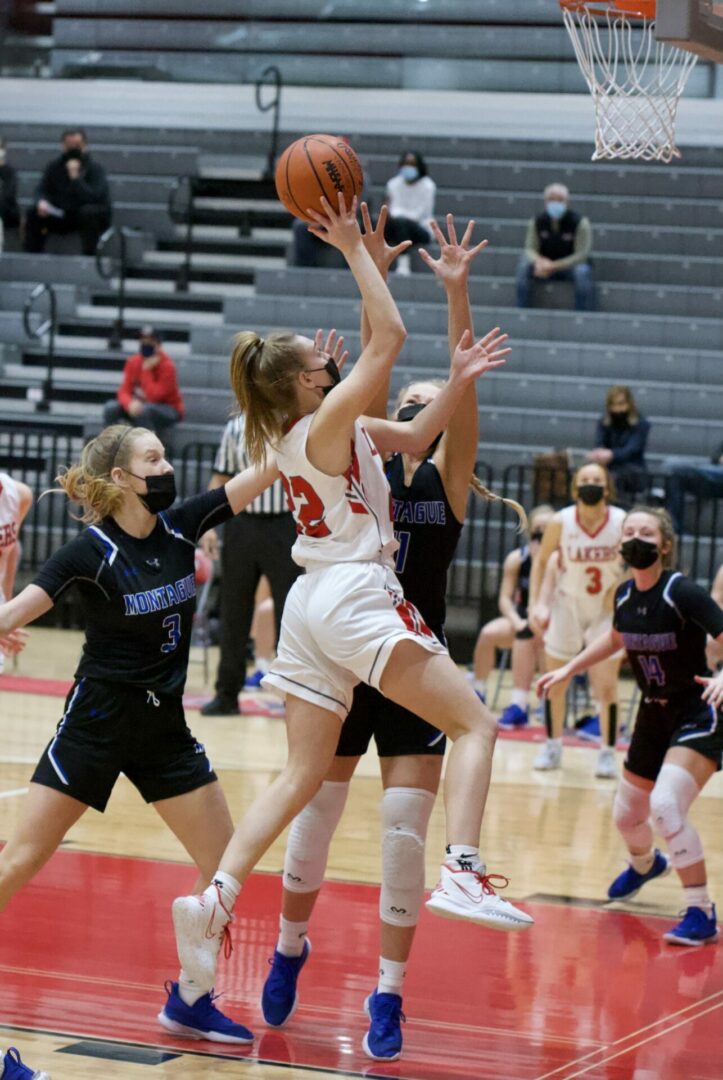 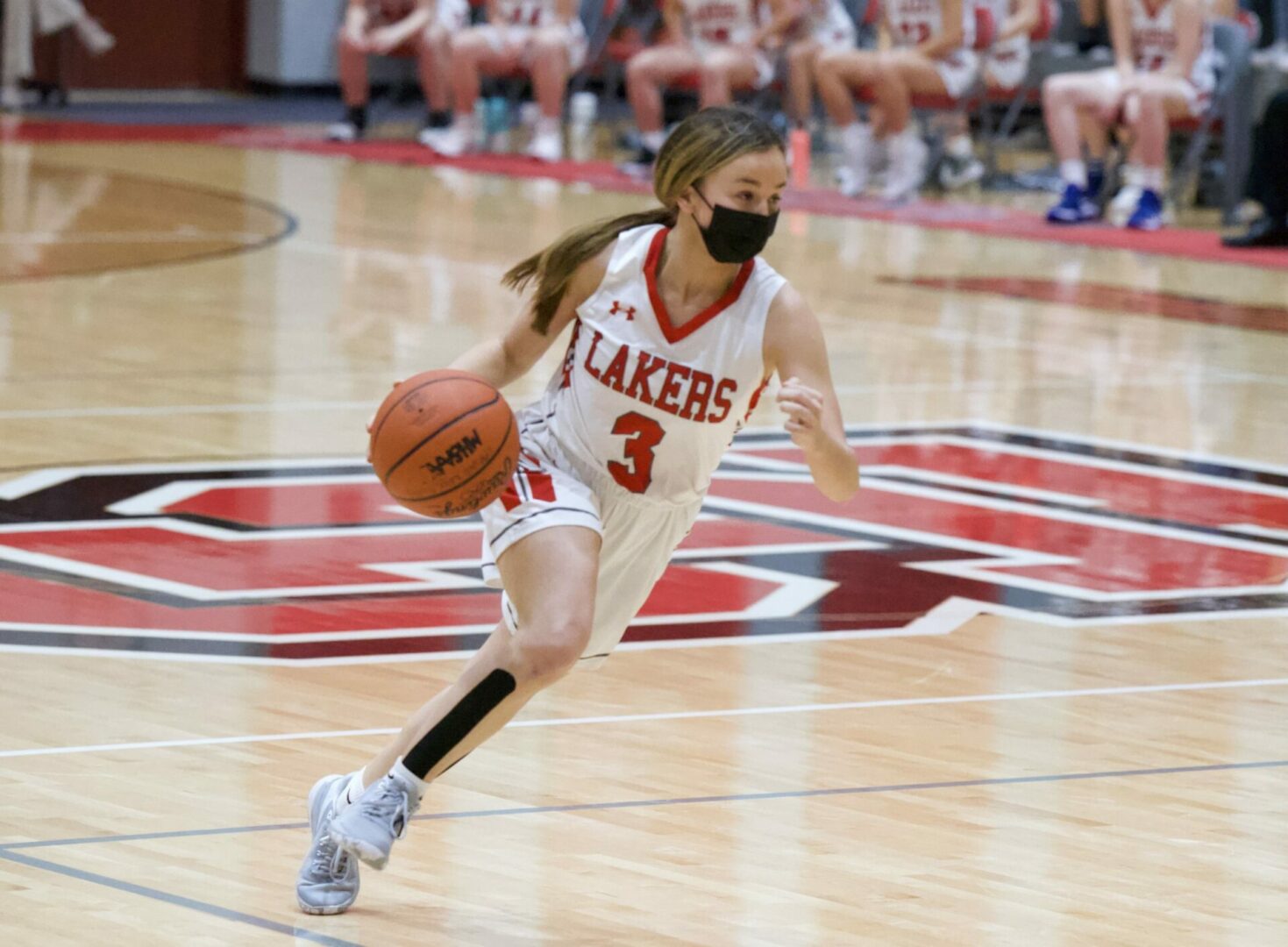