MUSKEGON – The Muskegon girls basketball team’s hopes for an O-K Green conference championship took a hit in the final seconds against Wyoming on Thursday night.

The Big Reds led by 10 at one point in the third quarter, then trailed by two points in the final seconds and had a chance to force a tie, but failed to get a shot off. 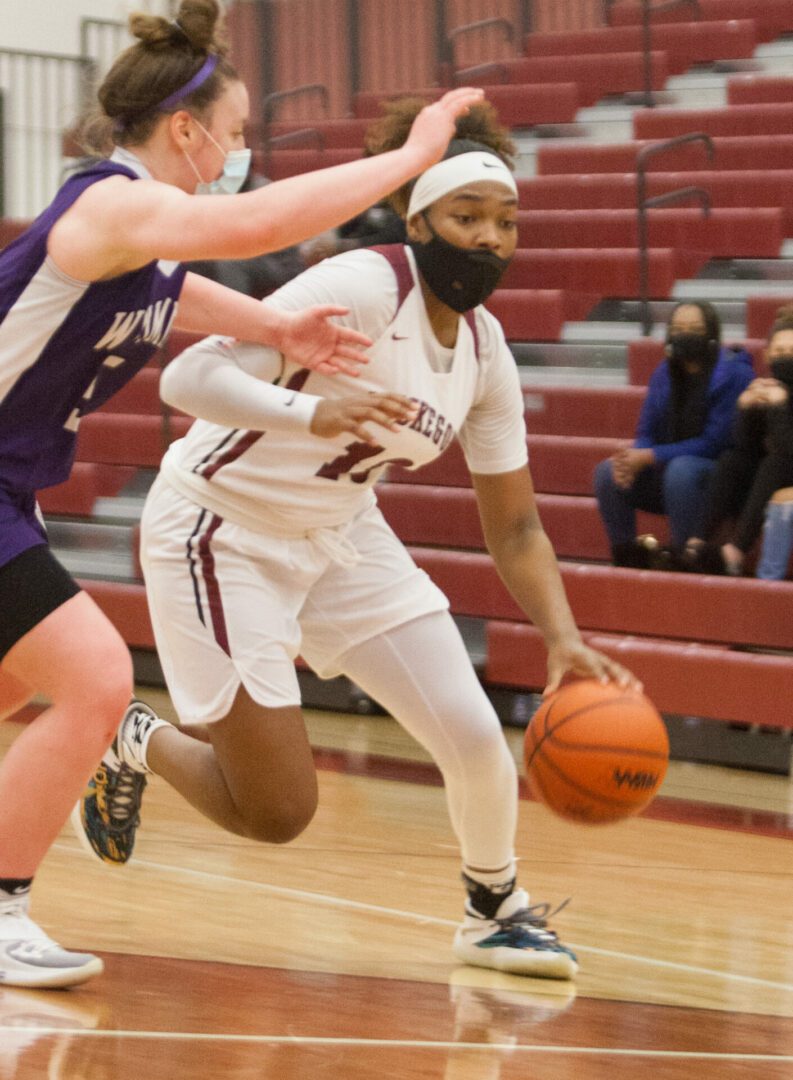 Kailyn Nash drives to the bucket for Muskegon. Photo/Jason Goorman

Muskegon took possession of the ball following a tie-up with seven seconds to go and the possession arrow in its favor. A tipped ball went out of bounds with under a second to go and the Big Reds retained possession.

The inbound pass went to McKynna Sims, but two Wyoming defenders kept her from getting the shot off, and the Wolves went home with a narrow 50-48 win in a key conference battle between the two teams that came in tied for second place.

The tough loss drops Muskegon to 8-7 overall for the season and 8-3 in the O-K Green conference. Mona Shores and Wyoming only have two losses with the regular season winding down.

Kailyn Nash and Sims led the Muskegon girls with 16 points each. Layla Harris finished with 10 points.

“We drew up an offense to send our strongest person, Kailyn Nash, into the middle and get the ball into her, and that didn’t happen,” said Muskegon Coach Paris Thomas about the last-second strategy. “That put us down to 0.8 seconds on the side, and that makes it difficult right there.” 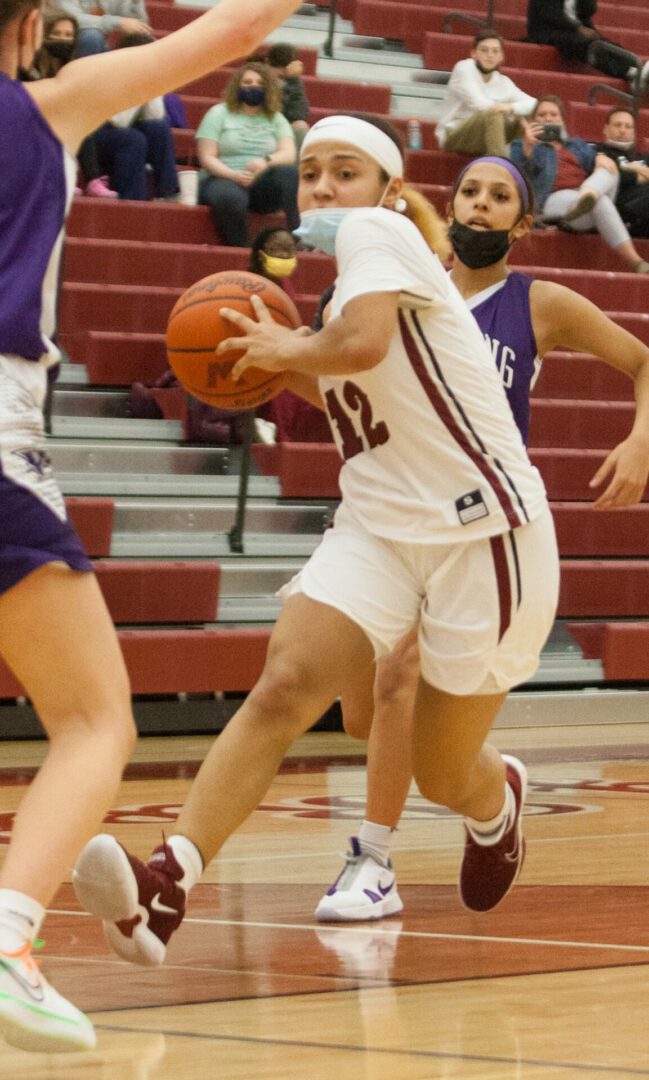 Muskegon gained the momentum in the second quarter, building a 10-point lead at one point. Sims sank two three-pointers and a free throw to push Muskegon ahead, but the Wolves kept battling and cut their deficit down to 27-22 at halftime.

The Big Reds held the lead throughout the third quarter with the help of Harris’ six points. But the Wolves made up further ground and only trailed the 35-34 going into the fourth.

The Wyoming girls gained the advantage midway through the fourth quarter. Nash put up eight points, but it wasn’t enough for the Big Reds to recapture the advantage.

A late three-pointer from Sims brought the Muskegon girls close, but they weren’t able to get the game-tying bucket as the clock ran out.

“(They are) a tough Wyoming team,” Thomas said. “They’re some well-played girls and a well-coached team. We just have to come in here and really work hard at putting four quarters together. We can’t just play half the game; we’ve got to play all four.”

The Big Reds hurt their own cause by missing numerous shots in the pain, and missing eight of 18 shots from the free throw line.

“I think free throws played a big part,” Thomas explained. “They sent us to the line, and at 10-for-18, we have to make more of those. We also blew some layups and made some bad passes. We forced some things, but then again, they’re tough.” 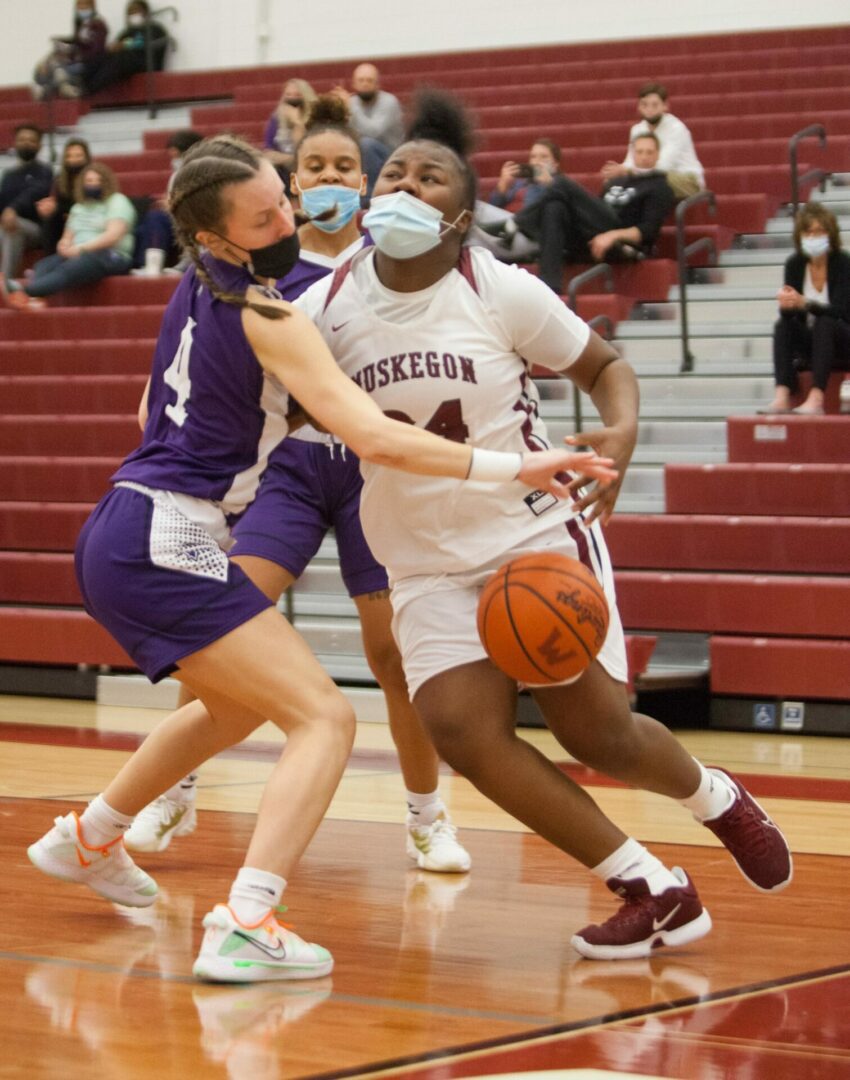 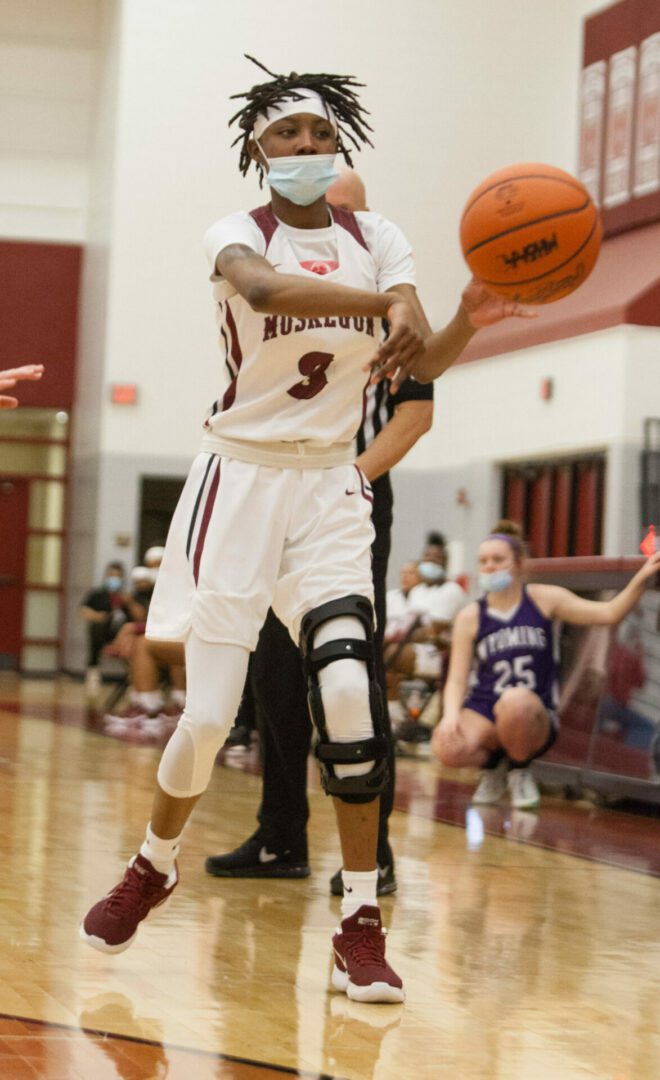 Jamya Robinson makes a pass into the corner for Muskegon. Photo/Jason Goorman 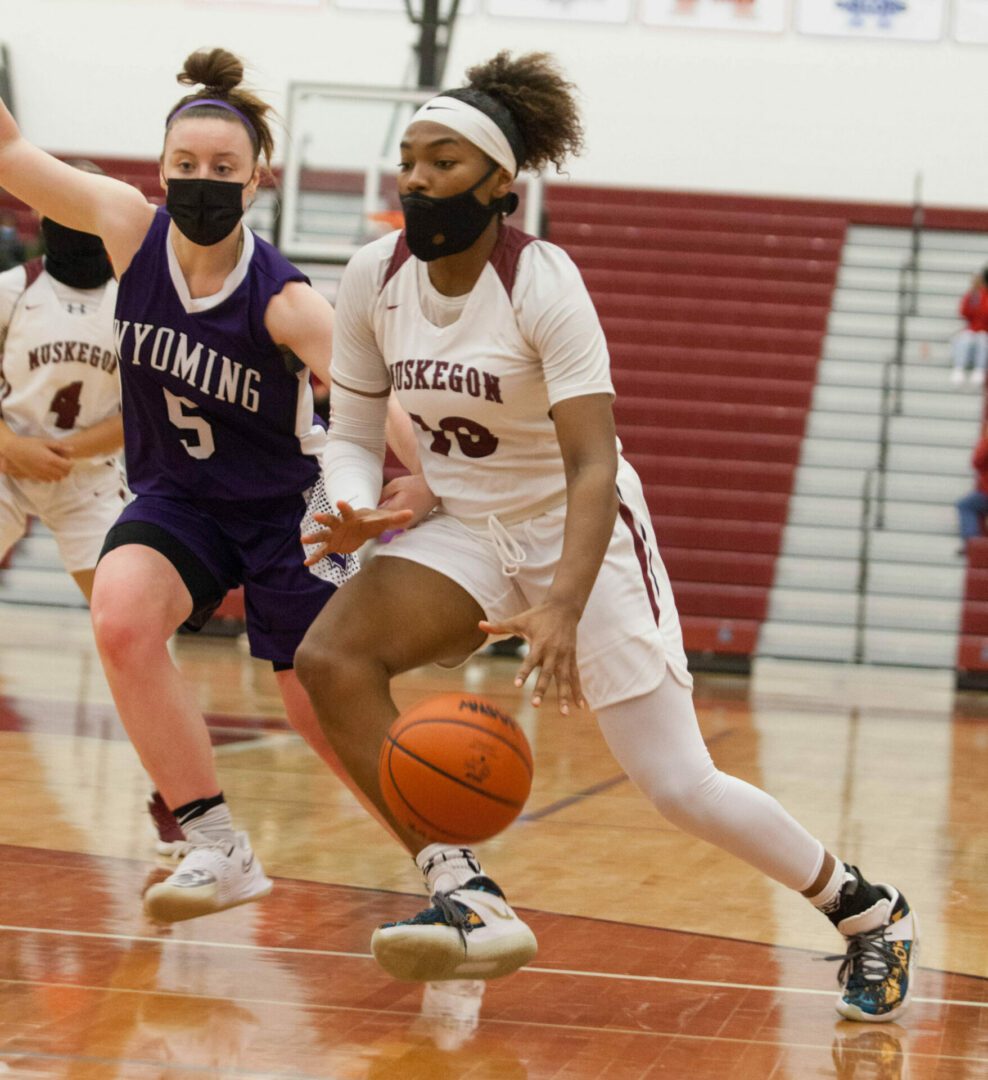 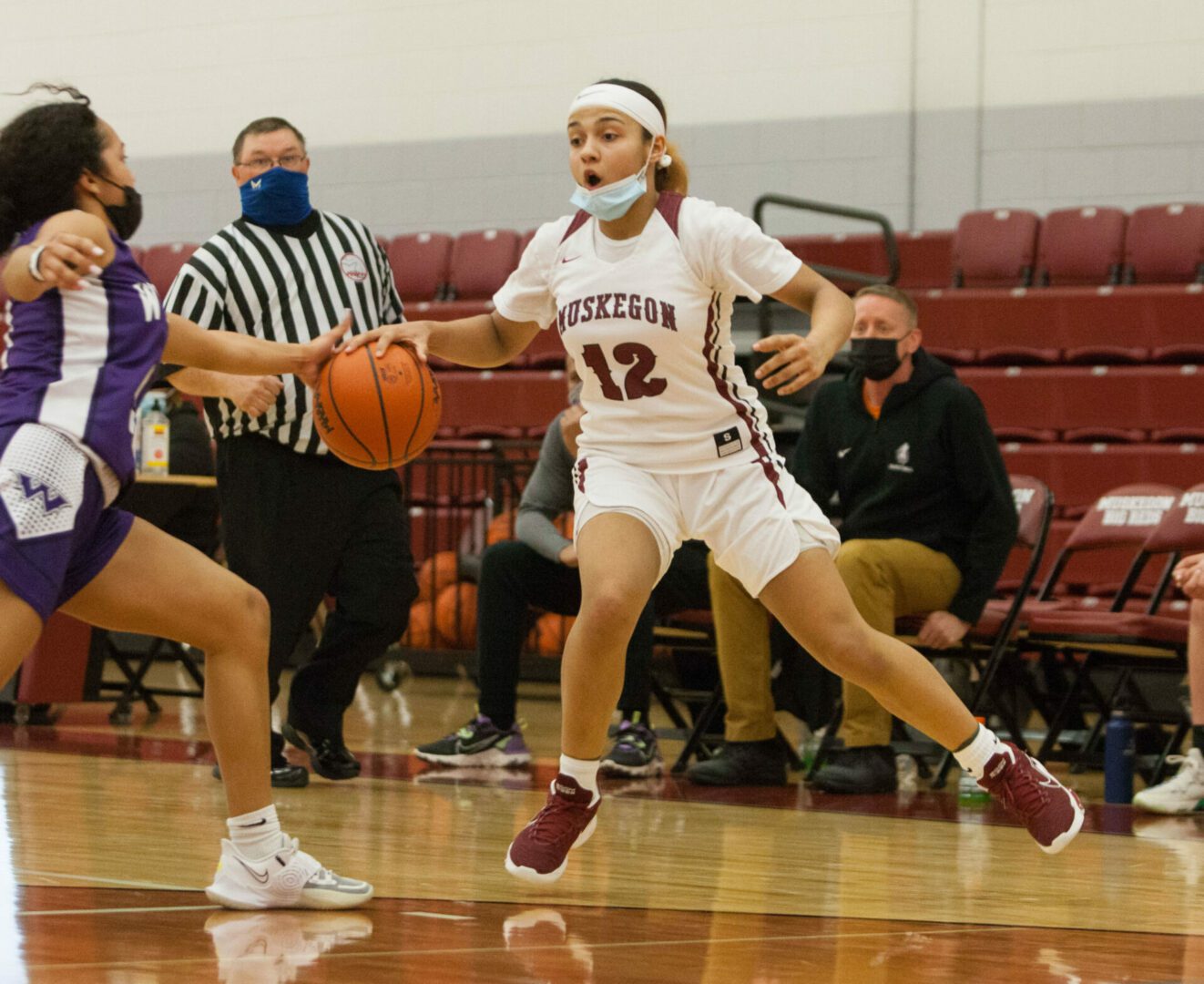 McKynna Sims controls the ball for Muskegon on the perimeter. Photo/Jason Goorman 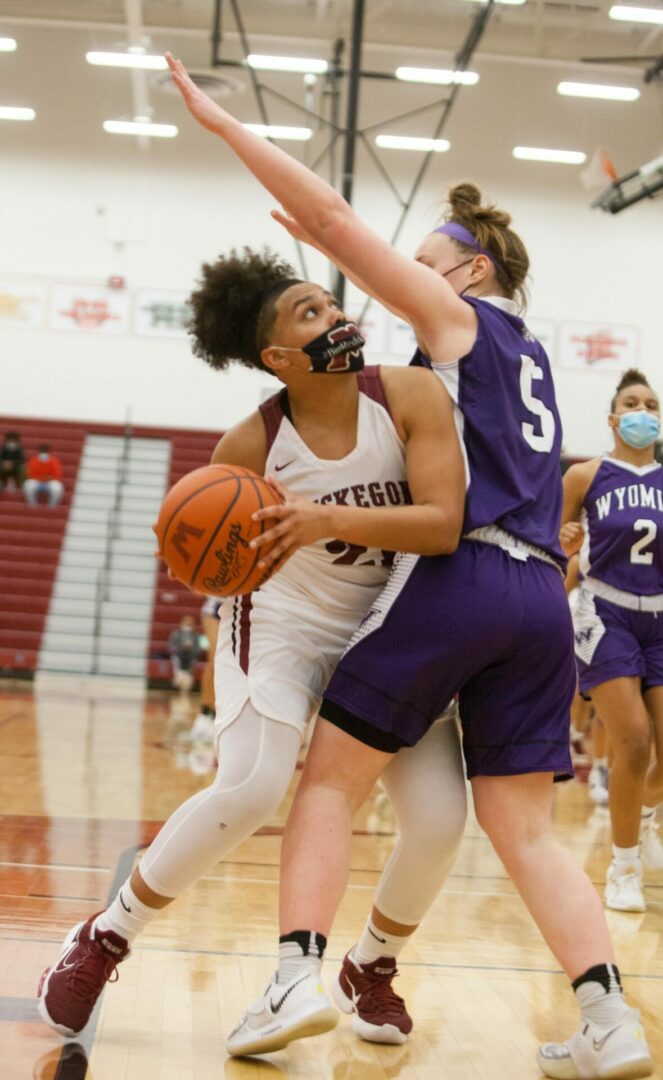 Layla Harris looks up at the hoop to score for Muskegon. Photo/Jason Goorman

Lumberjacks blow a pair of three-goal leads, lose to the Team USA Under-17 squad 7-4