MUSKEGON – Muskegon’s Kailyn Nash certainly has a flair for the dramatic.

Playing the final home game of her career, with a chance for a conference championship on the line, brought out the best in the Big Reds’ star, particularly as the clock clicked down. 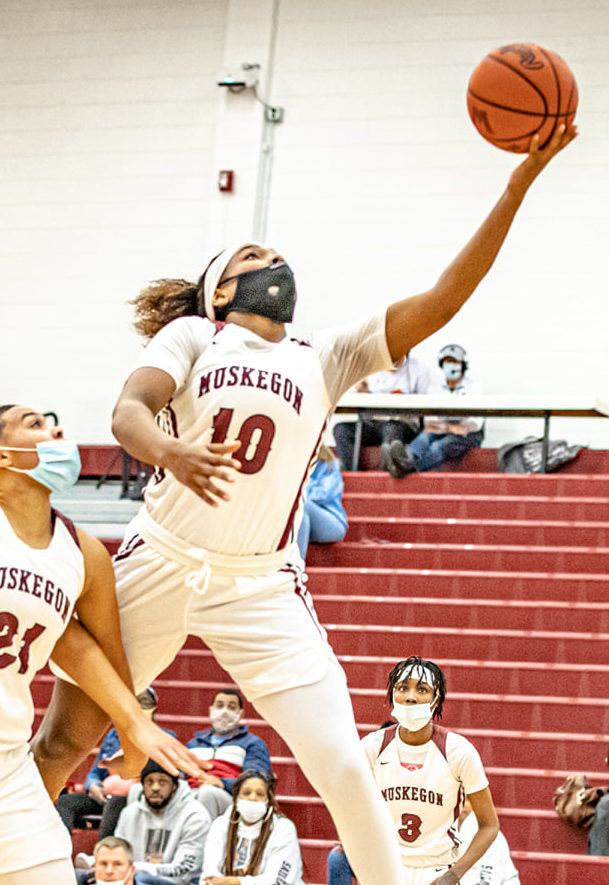 Kailyn Nash goes in for a layup for Muskegon. Photo/Tim Reilly

Nash scored 32 points, including 15 of her team’s 16 points in the fourth quarter, to lead Muskegon to an exciting 47-42 victory over Mona Shores on Thursday in a critical O-K Green conference showdown.

The victory pulled Muskegon into a three-way tie for first place in the conference with Mona Shores and Wyoming. All three teams are 10-3 in league play with one game remaining. Muskegon will play Zeeland West on Friday night, while Mona Shores will play Holland and Wyoming will play Reeths-Puffer on Saturday.

“The hardest part today was considering the fact that I will never play here again,” said Nash, who also had 10 rebounds, two blocks and was 7-for-7 from the free-throw line. “I have definitely enjoyed the rid and everyone that came along with me. It was my last game here, so I had to do what I could do to get my team the W.”

“I don’t think there is anything they would have been able to do to stop that kid tonight,” Muskegon Coach Paris Thomas said about Nash’s performance. “She rises above. She was recognizing her mismatches. Winning this will play well into our team’s confidence.” 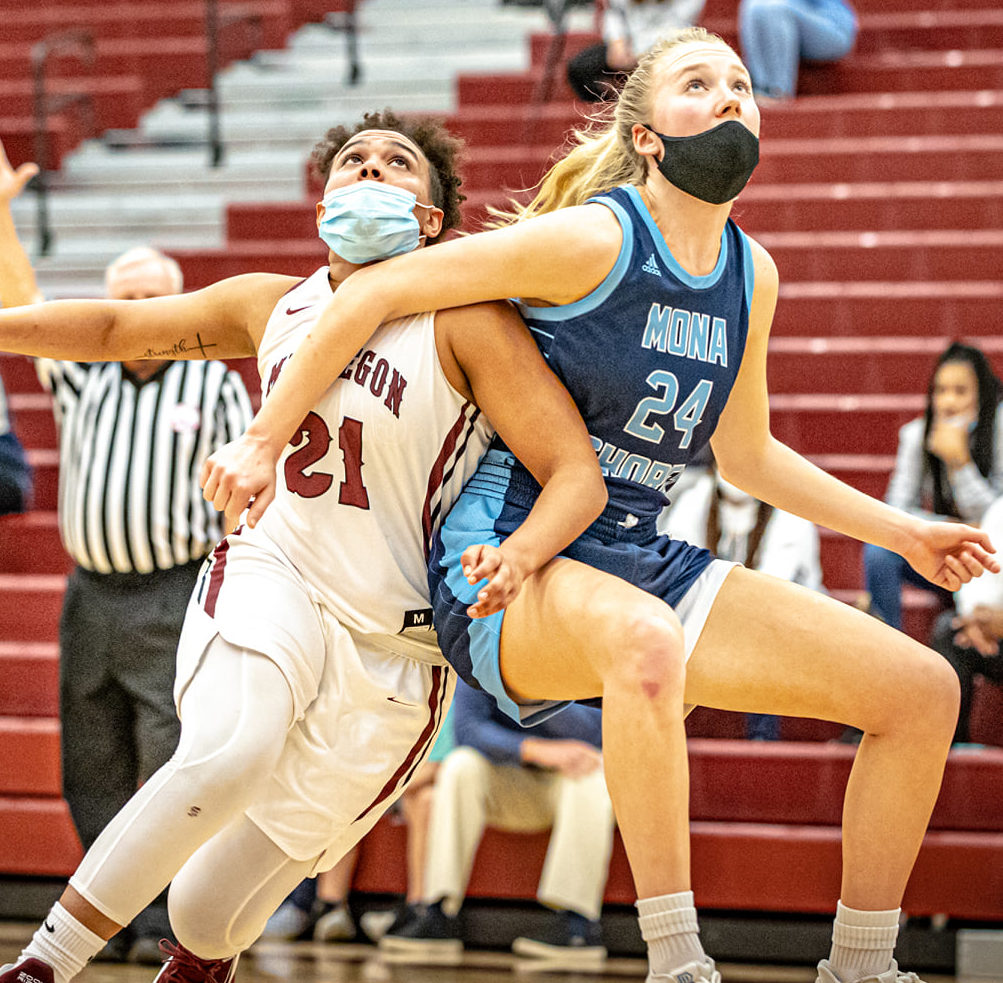 Muskegon came out strong, taking a 14-7 lead after one quarter, with Nash tossing in nine points.

The Big Reds added on four points at the start of the second quarter to take an 18-7 lead. The Sailors answered with a five-point run to make the score 18-12, with Olivia Sobczak nailing a three-point shot and Brooklym McClemore hitting a layup. Mona Shores’ Bri Wade also scored four points in the quarter, and the Big Reds’ lead was cut to 23-18 at halftime.

Muskegon went up 24-18 at the start of the third quarter, then the Sailors went on a 10-0 run to take a 26-24 lead with 4:22 left in the quarter. Riley Rosenthal led the rally with four points while Wade, Sobczak and Tierman all added two points. 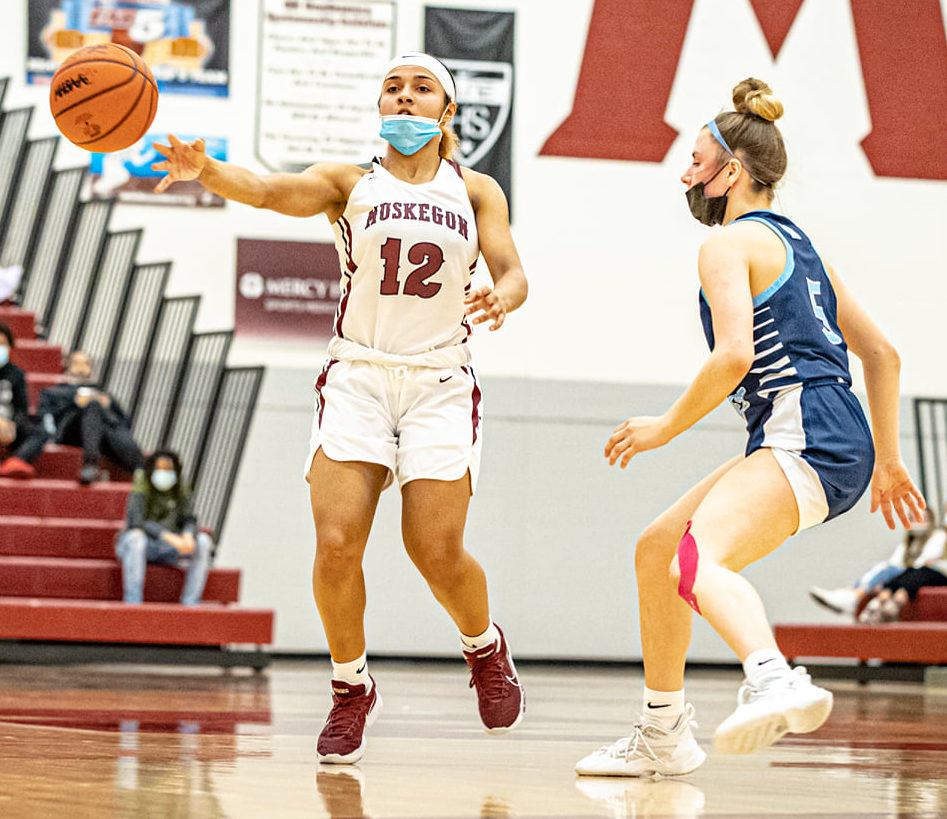 That’s when Nash really put on a show. She hit a layup and drilled a three-pointer to give the Big Reds the lead for good, then added 10 more points on layups and foul shots down the stretch. She was 4-for-4 from the line in the final minute with the outcome on the line.

Sobczak led the Sailors with six points in the fourth quarter, but Mona Shores could not keep up with Nash.

“We knew what we had to do today,” Nash said. “We have to be champions, and I won’t settle for less.”

Mona Shores Coach Mike Phillips could only marvel at what Nash managed to accomplish against his team, which is now 11-3 overall on the season.

“We did the best we could do defensively,” said Phillips, whose team could meet Muskegon again in next week’s Division 1 district finals, if the Sailors and Big Reds advance that far. “I’m glad she is a senior and I won’t have to see her again on this floor. She is s tough stop. We had every kid on the floor with their eyes on her and she was still able to get to the hoop.”

Sims added six points in the win for Muskegon. Sobczak led the Sailors with 11 points while Wade, Riley Rosenthal and Tierman all added eight.