Ravenna wrestling team wins a district title by beating Hesperia, after three straight years of losing to the Panthers

RAVENNA – There are banners on the wall of the gym at Ravenna High School for all the varsity sports, listing the years the various teams won championships.

The wrestling banner is still pretty bare, with only one district title listed so far. 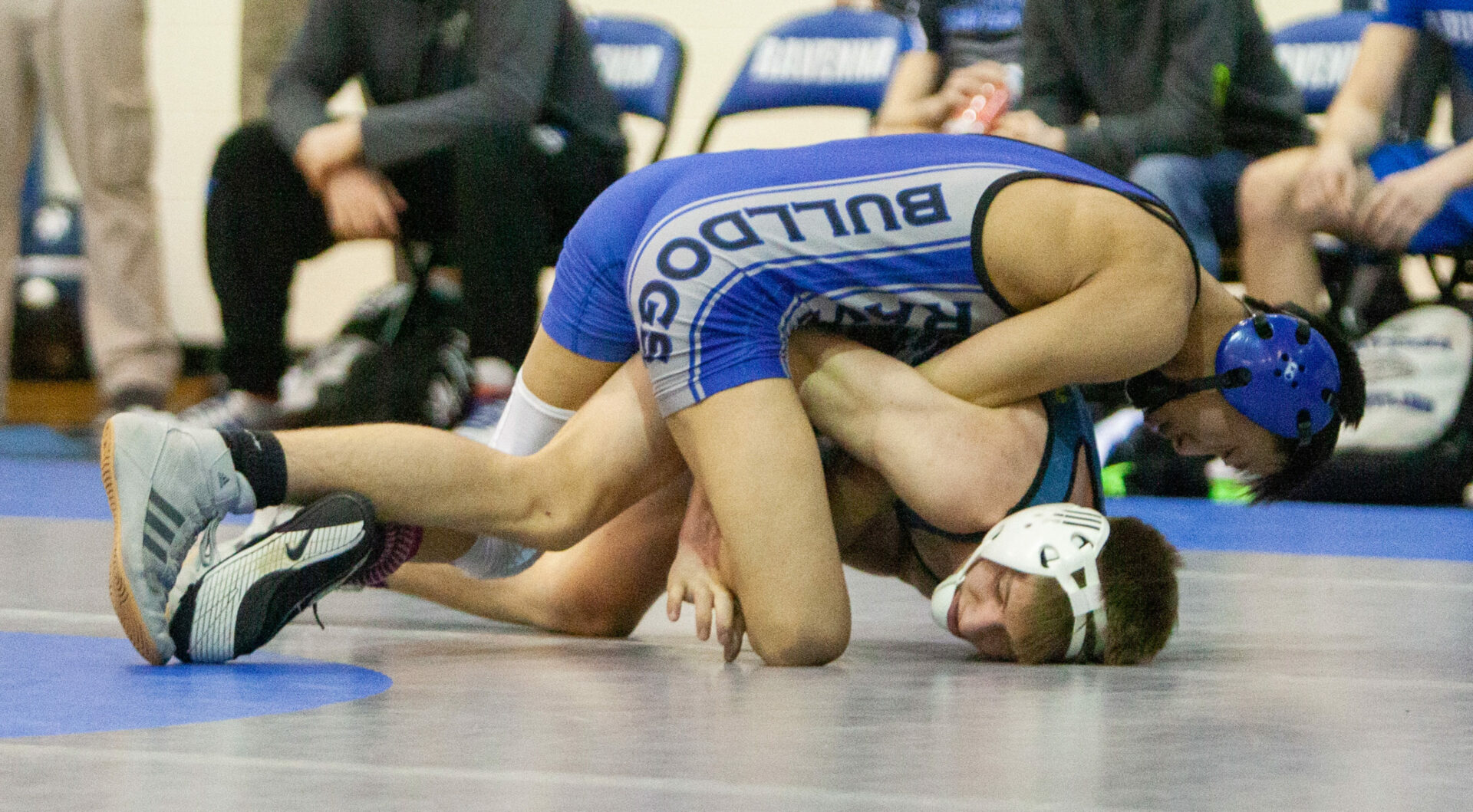 But that’s likely to change a lot in the future, because the Ravenna wrestling program is on the rise.

The Bulldogs demonstrated that on Wednesday night by winning two dual matches to capture a Division 4 district team championship in their own gym. As mentioned above, it was only the second district title in the most recent history of the program, which only dates back to 2011.

The Bulldogs won the title exactly the way they hoped to – by beating traditional power Hesperia, the team that beat them in districts the past two years, and in regionals in 2018.

Ravenna wrestled Hesperia in the semifinal round on and won the challenging match 45-36. The Bulldogs went on to win the championship match 52-21 over Mason County Central, which was much easier, because the Spartans did not field a complete lineup and had to forfeit eight weight classes.

The biggest win of the night definitely came in the semifinals. 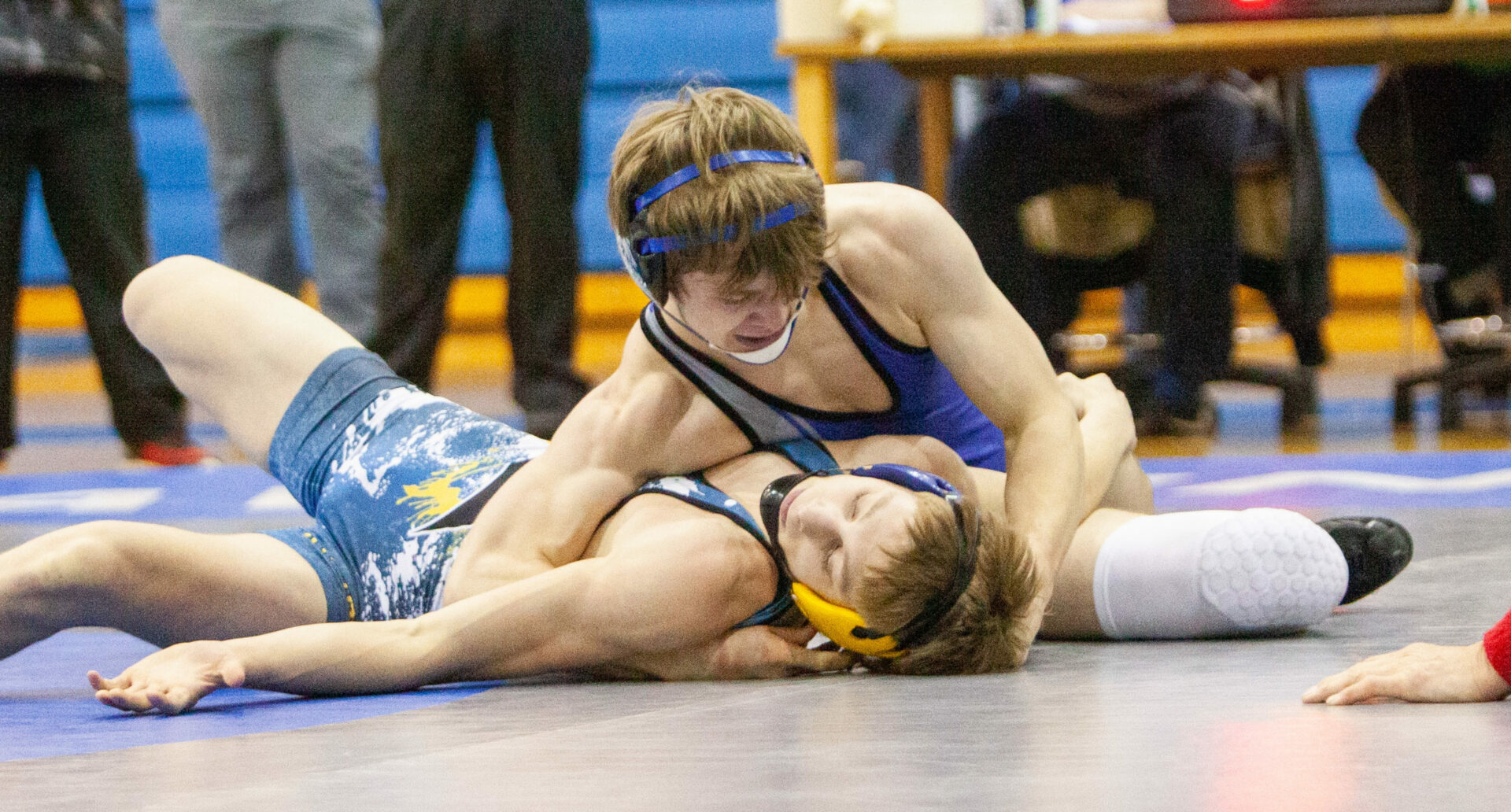 “From the very first day of practice, we sat the kids down and said our biggest goal as a team was to go out and win that match on that day against that team,” Ravenna Coach Cody Carpenter said about Hesperia. “We knew we would wrestle them in the first or second round, and we knew we would battle it out.”

The Bulldogs got off to a good start against Hesperia in the 135-pound match, when Austin Brown snuck past Hesperia’s River Robertson 5-4 in a grueling battle, giving Ravenna a 3-0 lead.

The Bulldogs fell behind 6-3, got back on top 9-6 with a forfeit win by Tristen Witt, fell behind 12-9, then took the lead for good when Julius Nerlich pinned Hesperia’s Kamyrn Rosencrans in 2:42 in the 160-pound match.

That left the Bulldogs with a healthy 33-18 lead. 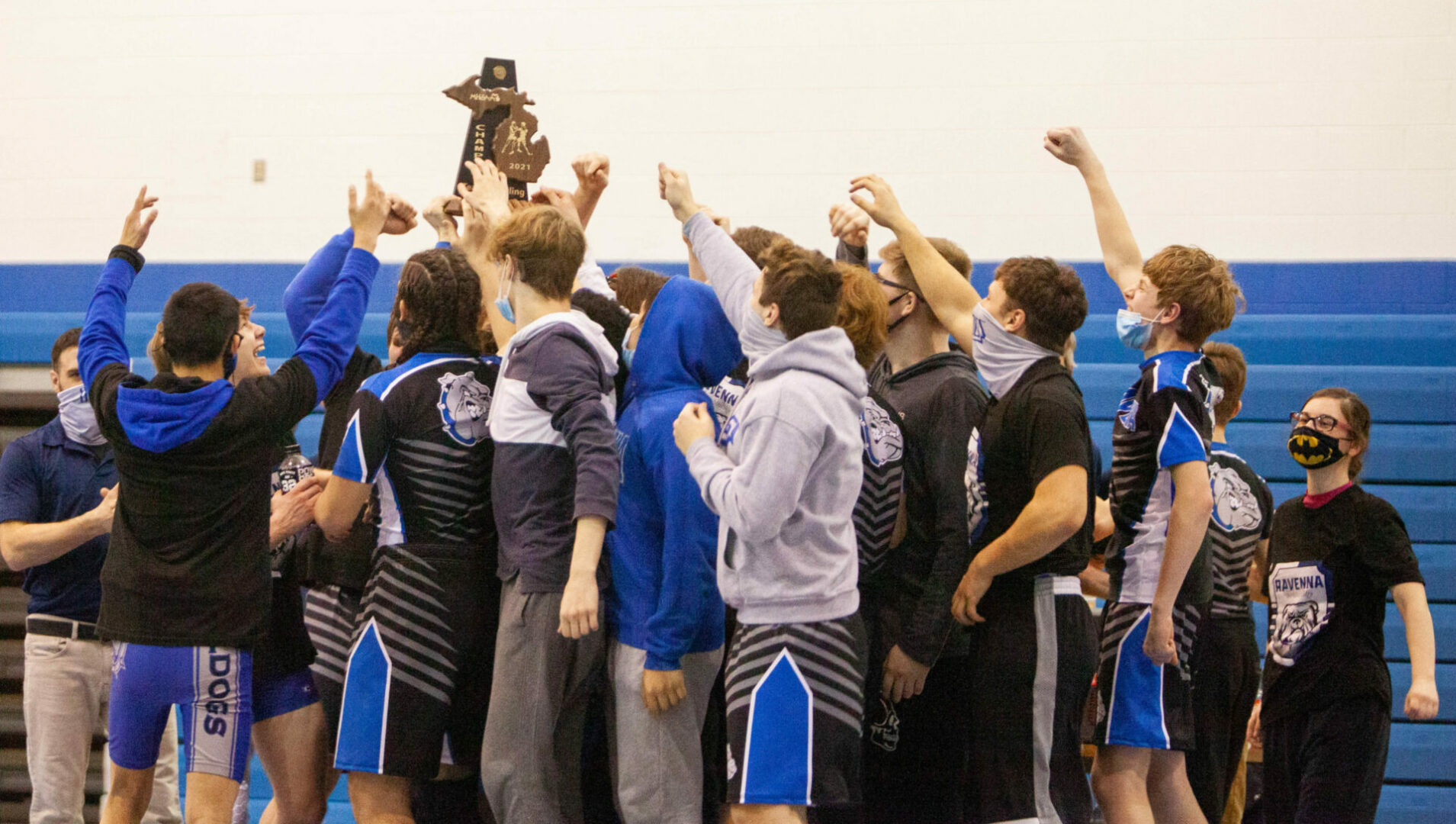 Nick Scoefield won with a pin at 112 pounds, and Kevin Spoelman did the same at 125, sewing up the revenge victory for the Bulldogs. Ravenna will now move on to compete in team regionals next Wednesday.

“The guys really wanted this,” Carpenter said. “After getting taken down by Hesperia the past few years, it just added fuel to their fire. It was a huge goal of mine to beat that tam for a long time.

“I knew we were in a position where we could win, but everyone had to have their minds right and compete and have a lot of heart, especially to beat a team like Hesperia.”

After beating Mason County Central and celebrating with the district trophy, Carpenter said the title has a lot of significance for his program, which has come a long way in a few short years. Five years ago, when Carpenter began as an assistant coach with the team, there were only eight wrestlers on the squad. 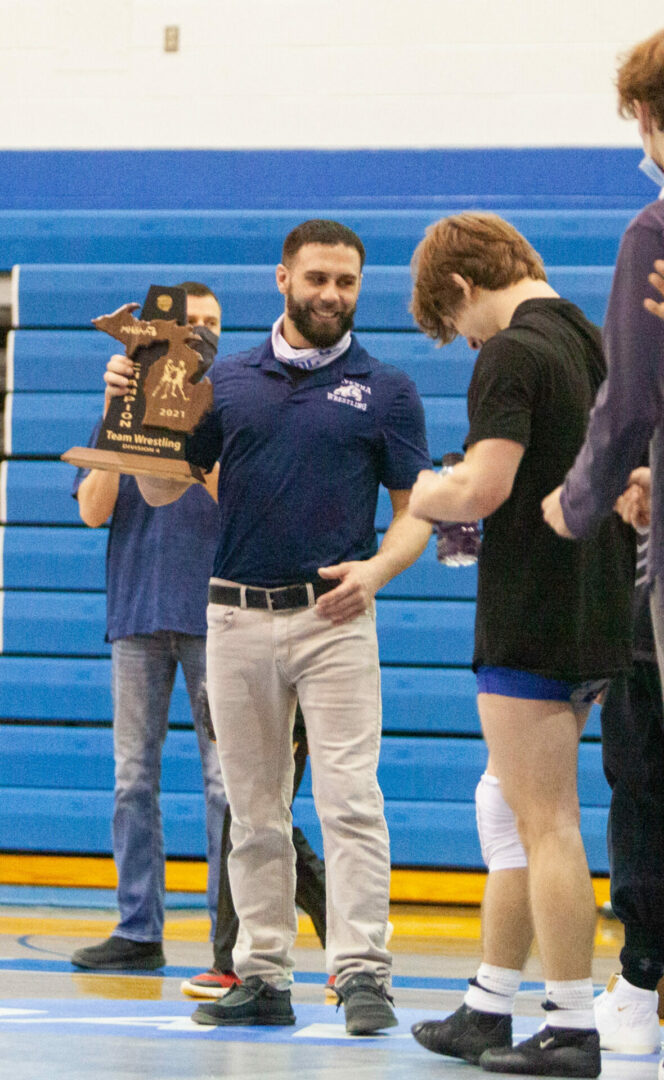 But the numbers started to swell after the Bulldogs won their first district title in 2018. Last year they had 25 guys on the roster, and this year there are 21, which is not bad at all for a season that was delayed for two months by COVID.

Carpenter hopes the most recent success will help the program earn official varsity status at Ravenna High School, with all the perks that come with it. As it stands the Bulldogs are still classified as a club team.

That means they aren’t even allowed to use a school bus for transportation to road meets. They have to car pool, with parents driving groups of wrestlers to wherever the competition might be.

“It makes it tough,” Carpenter said. “You worry about every parent getting there, or cars breaking down. There’s a big push to hopefully change things next year, and winning helps get support behind that. I’m really excited.  Hopefully our kids will get the experience of riding home together on a bus with a trophy.”