NORTON SHORES – There has probably never been a hockey team so happy and relieved to play a game than the Mona Shores Sailors were on Feb. 10, when they finally kicked off their season.

Of course playing a game couldn’t sweep away the grief that has plagued the Sailors for weeks, but getting back to competition gave them new focus in the midst of a heartbreaking situation – the tragic death of senior defenseman Brennan Dethloff. 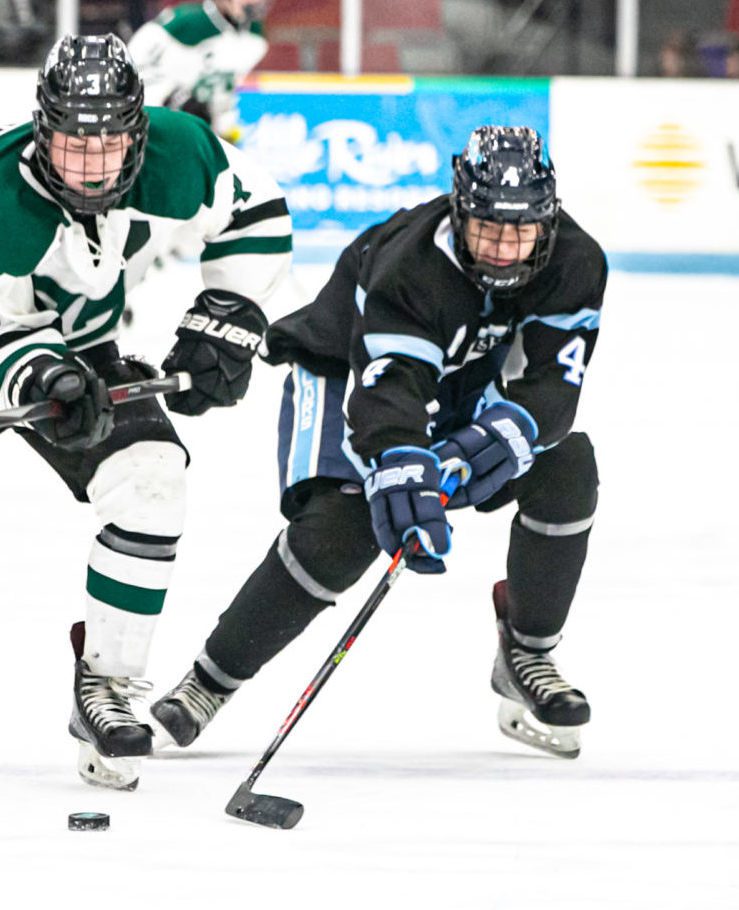 Brennan Dethloff tries to poke the puck away from a Reeths-Puffer forward in Mona Shores’ game against the Rockets on December 21, 2019. Photo/Tim Reilly

That stunning loss has provided extra motivation for a team that expected to be good, but has outperformed even its own expectations. The Sailors roared out of the gates by winning their first nine games, before losing for the first time last Saturday.

The players say they very much miss their teammate, and it will be a long time before the shock and grief subsides. So they’re doing the only thing they can to honor his memory in a way he would love – winning a lot of hockey games.

“We’re having fun out there, but still in the back of our heads we know this is for him,” said sophomore forward Jake Nanna. “We are giving a 110 percent effort for the guy who can’t be here. We’re doing what he would love to be doing. He’s not here, but we still have that connection with him.”

“He would be thrilled with excitement – Brennan loved to win and hated to lose,” said senior goalie TJ Habetler. “He would have the biggest smile right now.”

The long wait to play, followed by tragedy

The Sailors’ 2020-21 season – which of course has become just a 2021 season – couldn’t have unfolded in a more difficult manner.

First the team, along with all the others around the state, had to wait and wonder after the state of Michigan postponed the season for nearly three months, due to a late fall outbreak of COVID-19. The Sailors were just four days away from their first scheduled game in November when the rug was pulled out from under their season. 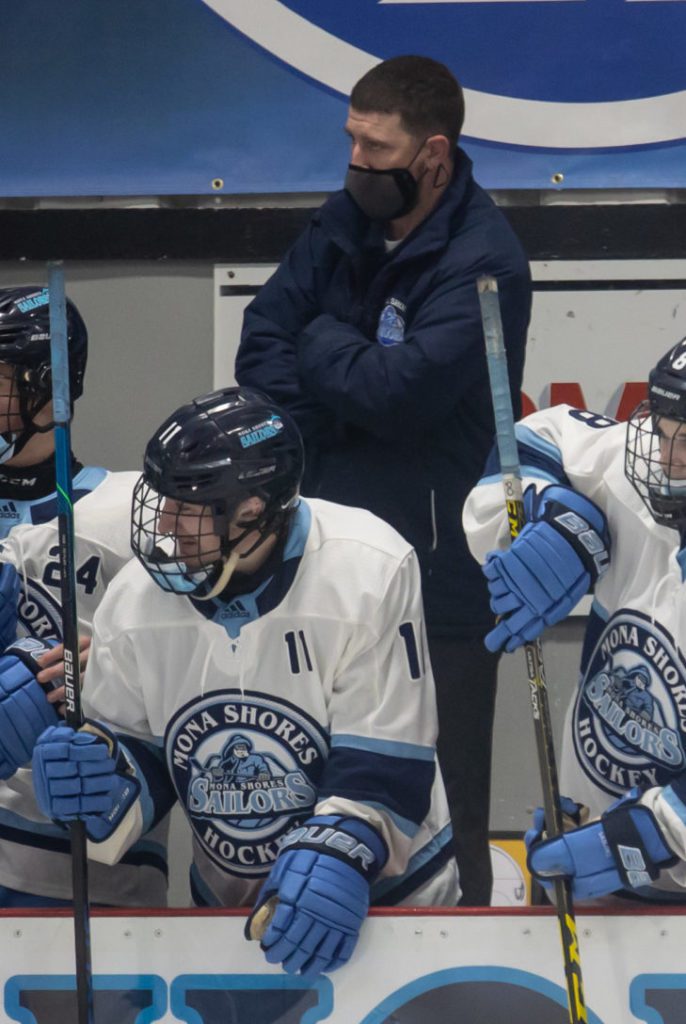 Then on Jan. 18, just a few days before the Sailors were finally allowed to start practicing, the unthinkable occurred.

Dethloff, 18, died two days after being involved in a car accident in Norton Shores. While the details of the situation have not been shared publicly, it has become apparent in recent weeks that Brennan was experiencing emotional difficulties that may have contributed to the tragedy.

By all accounts, Dethloff was a very friendly kid who was popular with his teammates. His sudden loss stunned and shook the Mona Shores players, coaches, and the entire community. Head coach Chris Benedict understandably cancelled the first practice, so the players could digest the horrific news.

Then came word that Carter Dethloff, one of the team’s goalies and Brennan’s younger brother, wanted to get on the ice and practice. So Benedict announced that there would be an optional workout for any players who felt ready to participate.

“On Monday morning we found out that Brennan had passed away, and I cancelled practice,” Benedict said. “Then Brennan’s dad reached out and said Carter wanted to skate that day, so we had practice. The Mona Shores school district was amazing. They had grief counselors at the practice, for any kids who felt like they needed to talk. And I realized that they all needed to be together.

“For the first week or so, we didn’t attempt to teach any systems or anything. We were just happy to get out and have some exercise and work on some skill stuff. They were happy to have that opportunity given back to them.”

After a few weeks of practice, the Sailors learned that state officials had suddenly reinstated the season, and there would soon be games to play. Despite the loss of a beloved teammate, they knew they were going to have a pretty good team, and were more than ready when their opener came on Feb. 10 on the road against Grand Rapids Christian.

The Sailors won that game in overtime, 4-3, when Scott Cotner scored the winning goal. The Sailors were happy about the victory, but even more so, they were thrilled about the ability to actually play a game, and experience a semblance of normalcy. 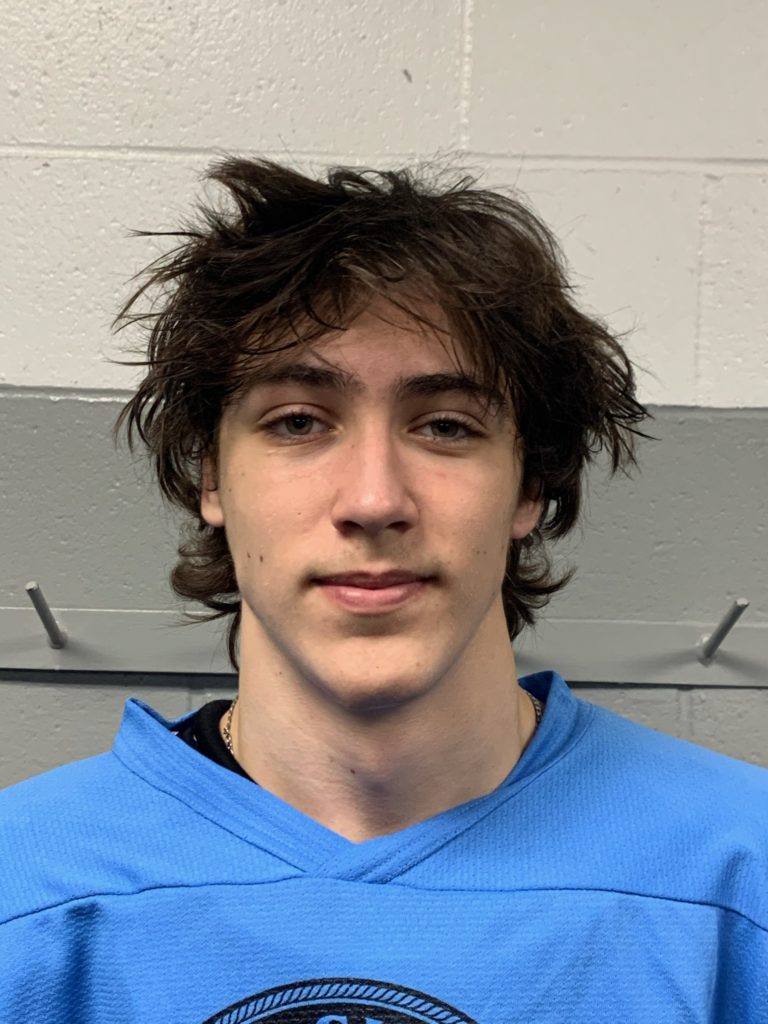 Sophomore Jake Nanna, who leads the team in scoring so far this season.

“You could just feel the weight lifted off from everybody’s shoulders,” Benedict said about playing that first game. “Any athlete knows the sport you play is very therapeutic. And it was the perfect game for us to start with. The Grand Rapids Christian coach, Shawn Zimmerman, is one of my best friends. It just felt right. They did a nice ceremony for Brennan before the game, and just to be able to get back on the ice and compete was huge for everyone.”

“It was a sigh of relief, just letting our energy go,” sophomore defenseman Isaac Habetler added. “It had been months coming. That first step on the ice was like a breath of fresh air.”

The wins kept coming after that.

Goalies TJ Habetler and Carter Dethloff have been splitting time and playing well, with Habetler posting a 5-0 record and Dethloff a 4-1 mark.

Benedict isn’t surprised by the team’s success, because 12 players returned this season from the 2019-20 squad that went 18-9, won a conference championship, and advanced to the regional finals of the state tournament.

With the addition of a few talented newcomers, the coach expected to put a winner on the ice.

“We have a pretty good chunk back from last year, and with Brennan’s brother on the team this year, we have two very solid goaltenders, so we never have to worry about that,” Benedict said. “I love our seniors. They are a great group and they’ve done a great job leading through the pandemic and the tragedy, and we have more sophomore drive this year. Two of our top scorers are sophomores.

“The kids have done everything we’ve asked them to do, and we’re certainly happy with how we’ve been playing.”

Playing to honor a friend

While the victories have been excellent therapy for the Sailors, there’s no way to separate the hot streak from the memory of Brennan. Simply put, the team is playing for him.

The Sailors never officially dedicated the season to Brennan. Besides wearing a No. 22 sticker on their helmets, attending the funeral as a team, and having a ceremony in his honor before their first home game, there are few obvious signs that they are carrying on in memory of their friend and teammate. 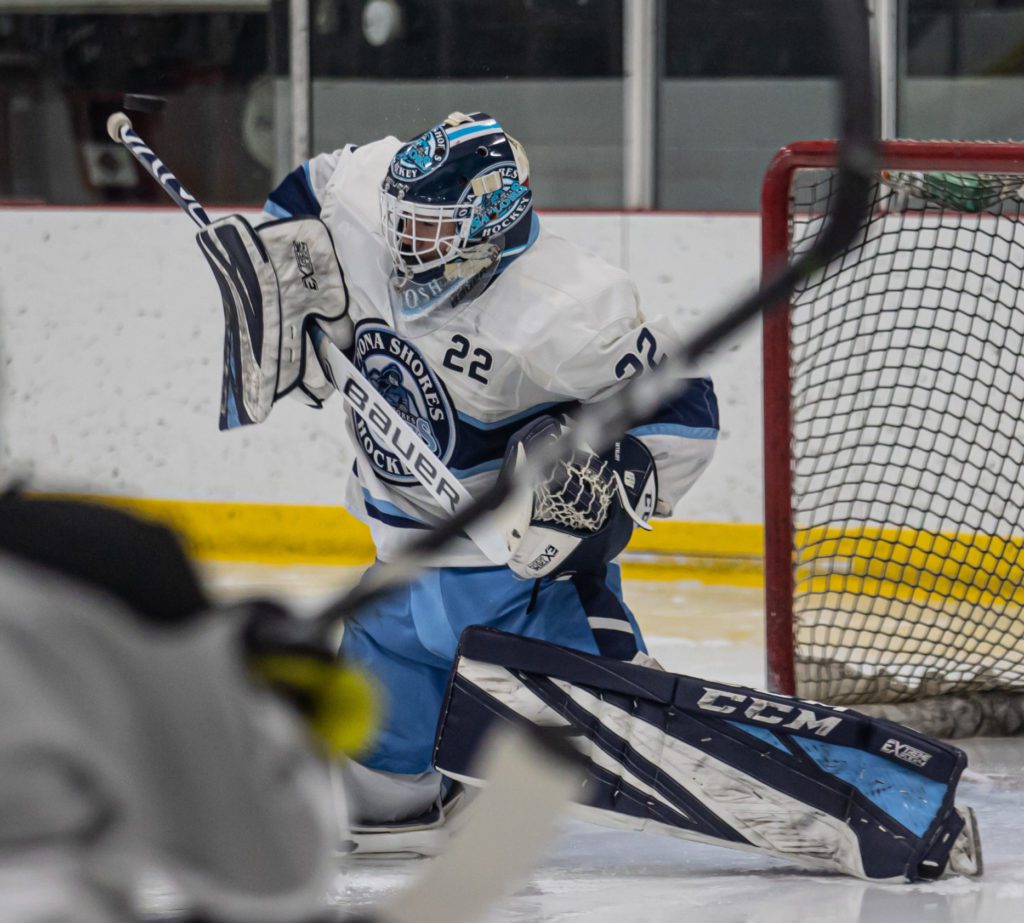 Goalie Carter Dethloff makes a save for Mona Shores during the Sailors’ win over Lowell on February 24. Photo/Tonya Pardon

The players and coaches just know their collective feelings about Brennan have been an extra driving force, because of the type of kid he was.

“It would have been his third year with the team,” Coach Benedict said. “He was a locker room guy. He would do anything for anybody. He always had a smile on his face. He was just a friend to everybody. He was always there to pick his teammates up and let them know they were in this together. He was a mentor to younger guys. I have a sophomore defenseman who told me he didn’t know what to do, because Brennan talked him into playing this year. He was just an incredible human being.”

Benedict said Brennan was also everyone’s favorite type of athlete – not overwhelmingly gifted, but a very hard worker who pushed himself to get better and better, which had a positive impact on his teammates.

“He came to practice every day trying to get better,” Benedict said. “He had made tremendous strides within the varsity program. He gave 100 percent all the time. We were looking forward to having six real strong defensemen this season.”

TJ Habetler was particularly close to Brennan, and said that came easy, because Brennan was an easygoing, friendly guy.

“I grew up with Brennan since kindergarten, and he was one of my best friends,” he said. “He was always there for everyone. I never heard a negative statement about him from anybody. He loved everyone and treated everyone with respect. 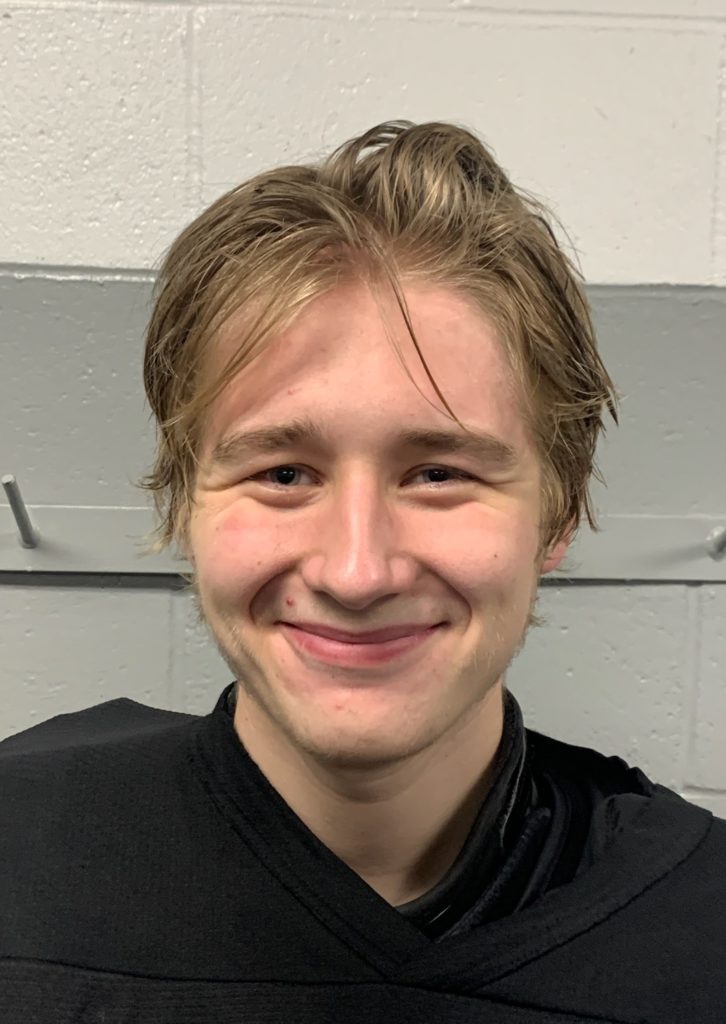 “It was super tough for me. I don’t even have the words to describe it. It’s still very tough to this day. I wasn’t getting enough sleep, and there hasn’t been a second when he hasn’t been on my mind.”

The players say they have become even closer as a team because of the tragedy, which has in turn helped them perform even better on the ice.

They say they were there for each other when the first shock came, with counselors available as well, and that support system has remained in place ever since.

“We got pulled in the next day, after Brennan was in the car accident, and we were all pretty optimistic at first,” Nanna said. “Then the next day they told us he didn’t make it, and it was a real hard time for our whole team. But we all leaned on each other. If anybody needed to talk, everybody else was just a phone call or a text away. Coming to the rink was tough at first, because Brennan was always there with us, but it helped a lot knowing everybody was there for us.

For Benedict – and all coaches of youth athletes everywhere – Brennan’s tragic loss underscores a challenge that requires particular attention. Coaches have to keep a keen eye out for youngsters who may be suffering emotionally, because it’s sometimes not very obvious.

Benedict said he had been in regular contact with Brennan, and saw no signs that anything might be troubling him.

“I had ongoing communications with Bren, and he always seemed happy,” the coach said. “I would ask if he was doing good, and he would say ‘Coach I’m doing great – I can’t wait to play again.’ You just never know what somebody else is going through.

“You do the best you can, and you try to do what’s right by the players. If you see that they are down, you try to pull them off to the side and talk to them. There’s a saying that’s going around – it’s okay not to be okay – which addresses a big stigma, especially with athletes. We keep trying to drive that home, telling them, ‘Guys it’s okay if you need to talk or need to cry. It’s okay.”

There have obviously been lots of tears shed among the Sailors since the loss of their teammate, and there will be more. But the players are also very busy pushing themselves to be what they hope to become, for themselves and for Brennan, in this strangely condensed season – state championship contenders.

“As soon as we stepped on the ice, something in our heads really clicked,” Nanna said. “He is the reason we are doing as well as we’re doing.” 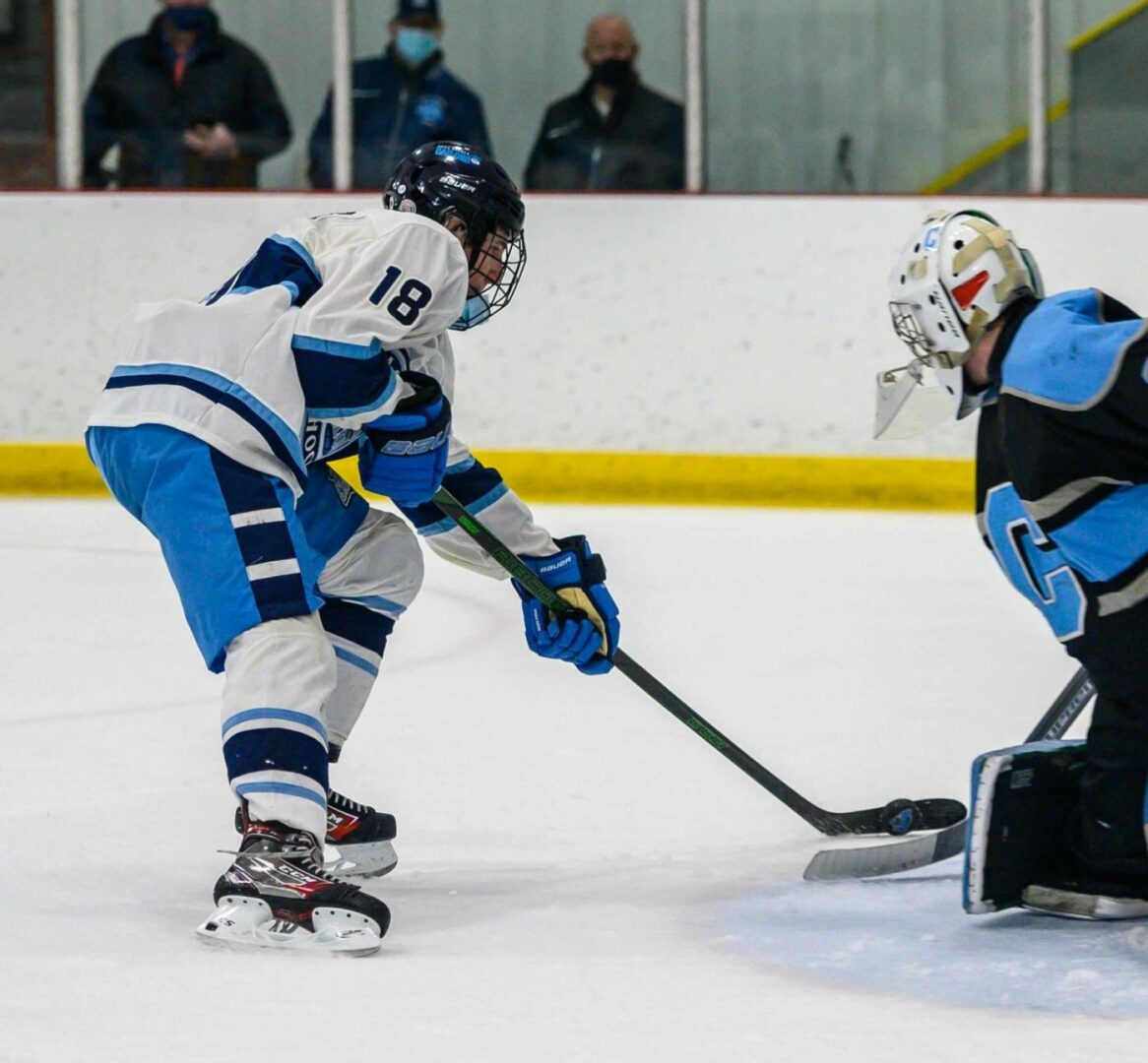 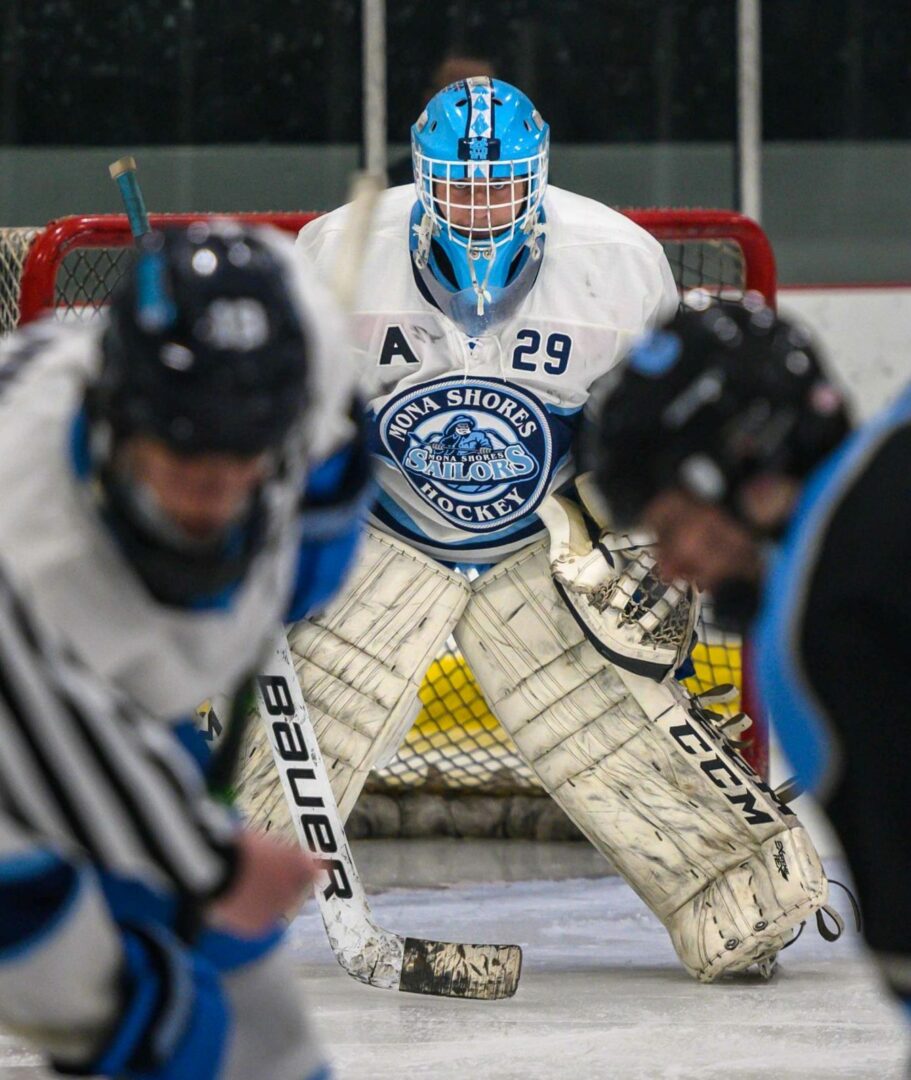 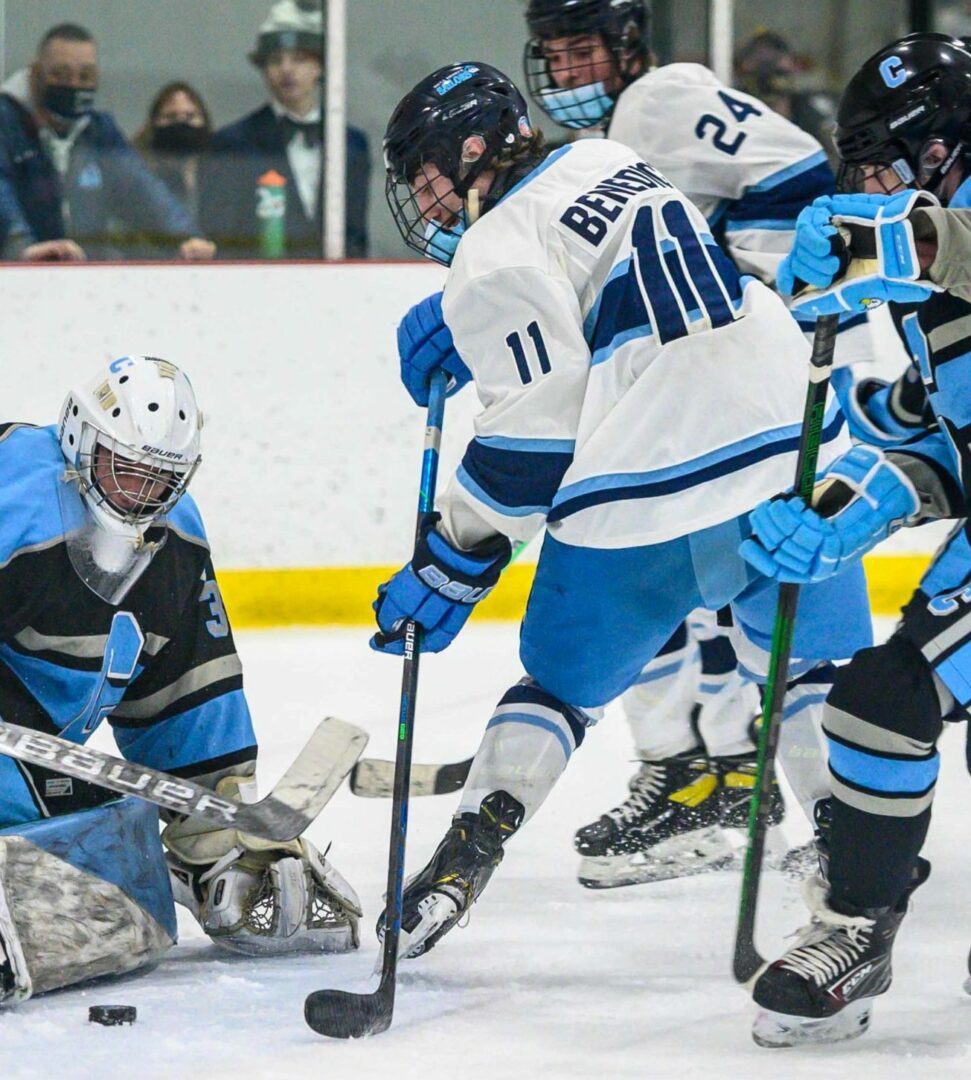 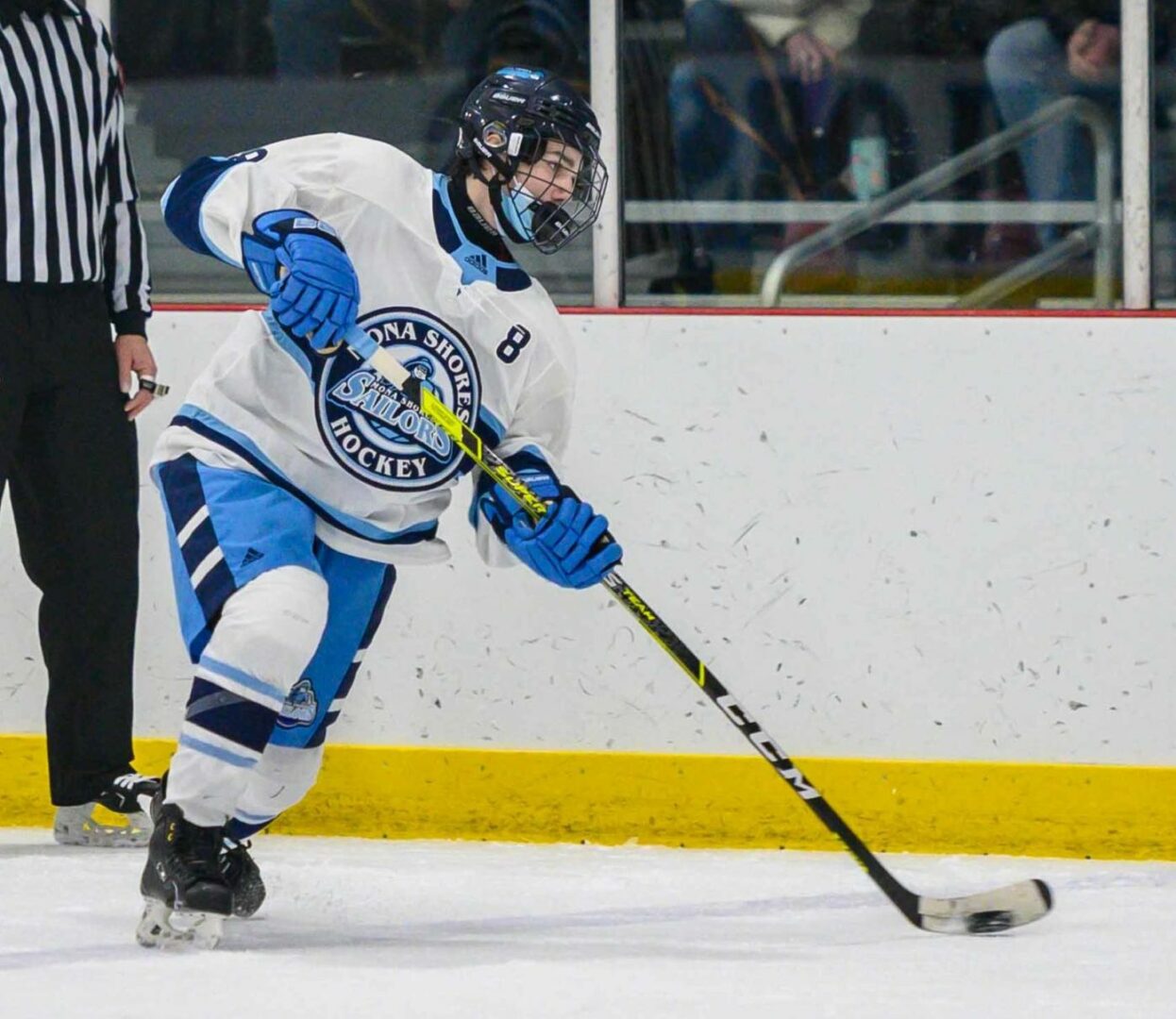 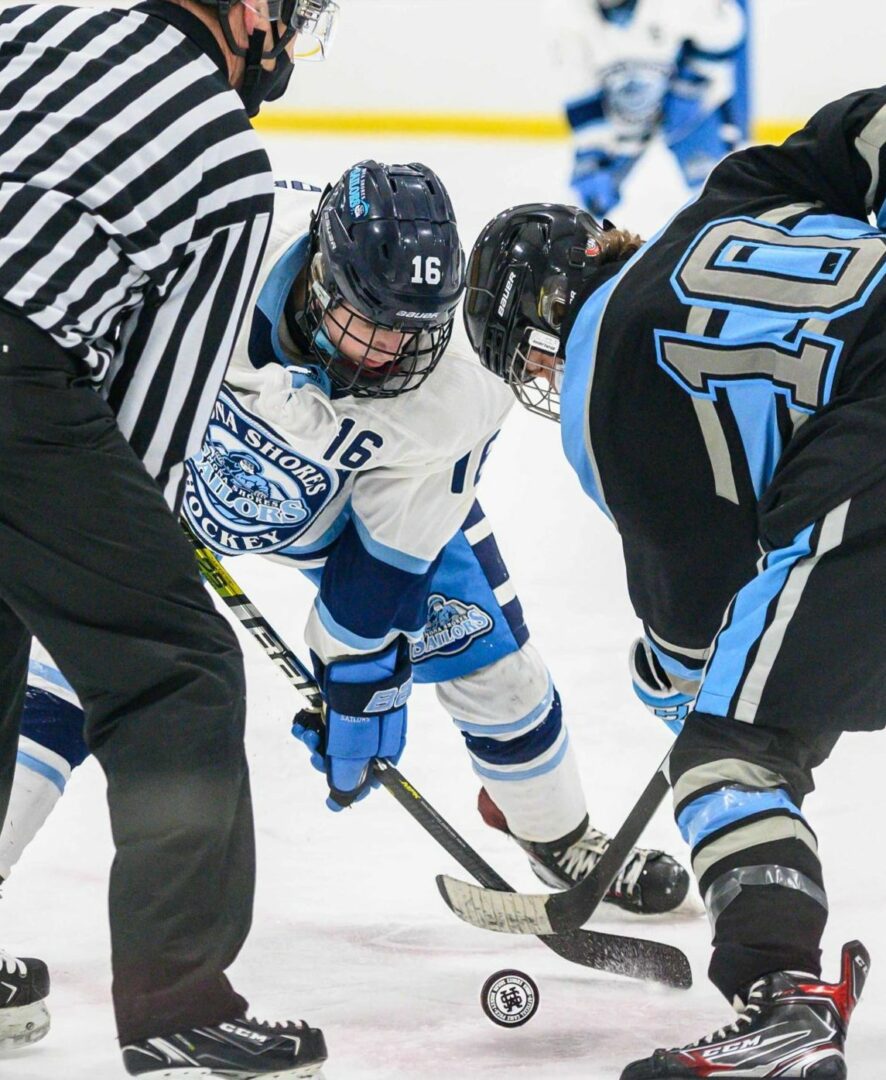 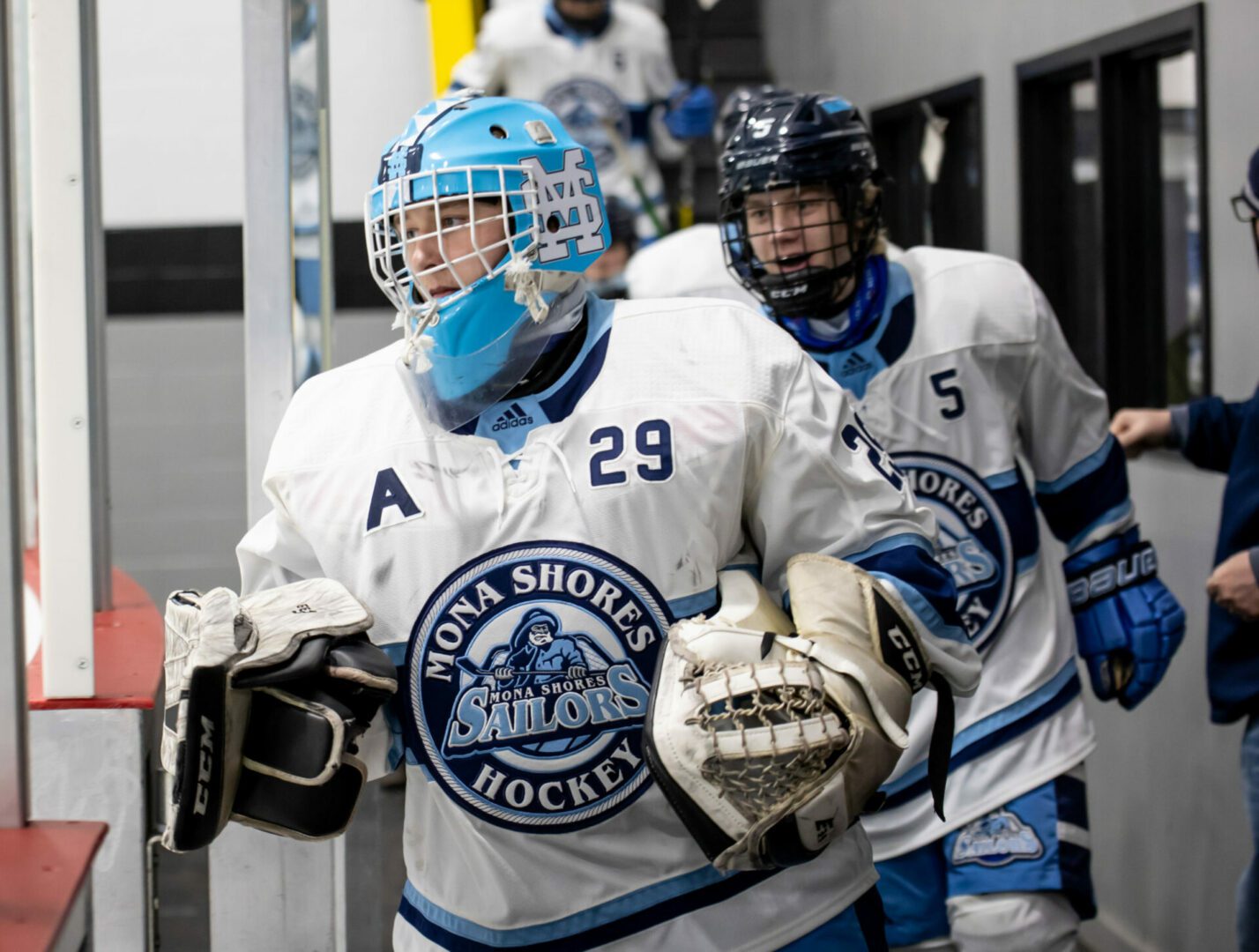