NORTON SHORES — The better the opponents are, the more exciting it is to beat them.

Add in the factor of avenging an earlier loss, ending your opponent’s perfect season, and getting back into the championship race yourself, and it doesn’t get much more thrilling than that. 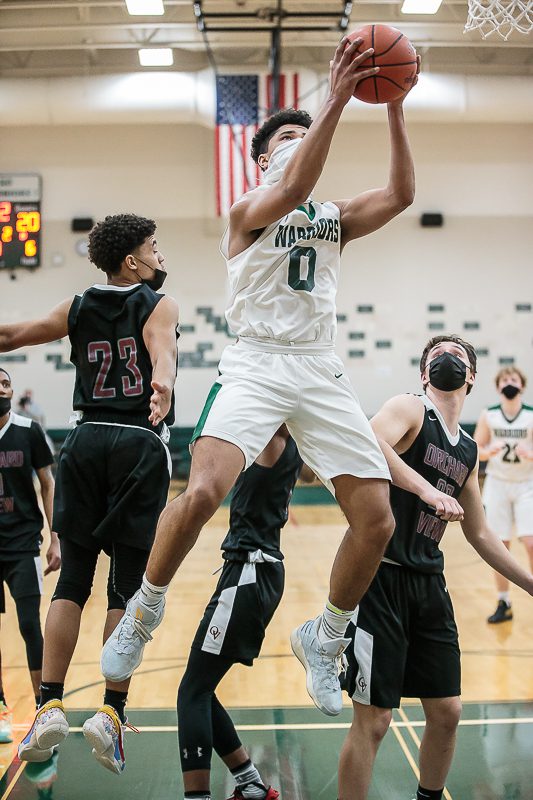 Owen Varnado pulls down a rebound for WMC. Photo/Randy Riksen

As evidenced by the emphatic “Let’s go!” yell and fist pump by Western Michigan Christian junior Owen Varnado at the final buzzer of his team’s stunning 57-50 win over Orchard View on Friday, the victory meant a great deal to the Warriors.

“OV is a great, great, great team,” Varnado, who led WMC with 19 points and 12 rebounds, said after the game. “We came prepared and motivated for this game. We came in like we had nothing to lose, we came out with that energy and it showed on the scoreboard.”

“That emotion, for the guys especially, was out of respect for Orchard View,” WMC Coach Kurt Gruppen said about his team’s excitement at the end of the game. “They handed it to us at their place. This game has been a focus for us. That was just out of respect for them and how good of a team they are. It felt great.” 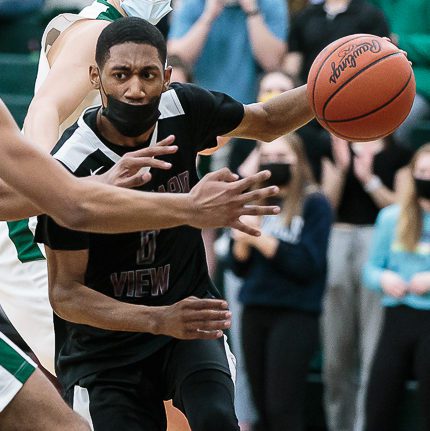 OV is now 14-1 overall and finished the conference season with a 7-1 mark.

“Before the season, one of our goals as a team was to win the conference championship,” said Varnado, whose team now has won six straight games. “We’ve still got one step left in that goal. We’ve got to go get Ludington on Tuesday. That’s really important for us to go win that one.”

Gruppen said a major difference from WMC’s first matchup with OV – an 18-point loss – was taking care of the ball and limiting transition baskets for OV.

“We turned the ball over 28 times at their place,” Gruppen said. “I think it yielded them 34 points. We knew we had to take care of the ball. We felt like we could score a little bit if we took care of it, but that’s hard to do (against OV). That ended up being the difference for us.” 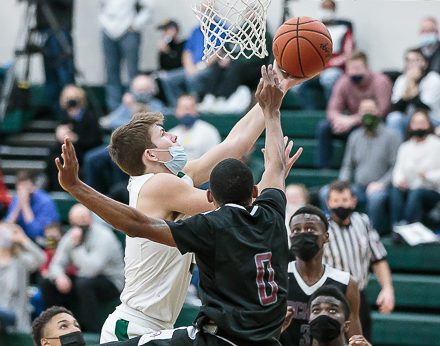 Orchard View coach Nick Bronsema said his team struggled to execute, but he hopes the first loss of the season will motivate the Cardinals.

“Credit to WMC, we were unable to execute,” he said. “They executed and we did not. They played well together. It’s not the end of the world for us, but it didn’t make for a fun night.

“I think it’s going to humble us and hopefully we will be hungrier for it. It’s going to show our character, bad or good, and it’s going to reveal some things for us. I know my guys and I think they are going to respond well.”

The teams played an even first quarter, with the score tied 14-14 after the first eight minutes. The Cardinals led 14-9 before a 5-0 spurt from WMC in the final minute.

The second quarter was competitive as well, with WMC grabbing a 16-13 edge to lead 30-27 at the break. A three from Samuel Liggett with five seconds to go provided the halftime cushion. 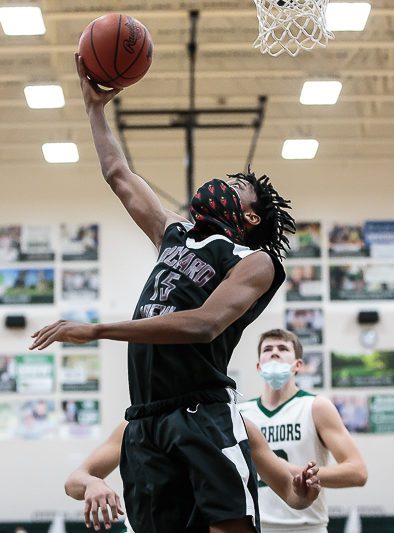 A basket by OV’s Larry Brewer cut WMC’s lead to 37-35 with four minutes left in the third, but the Warriors finished the quarter on an 8-0 run to lead 45-35 heading into the fourth. 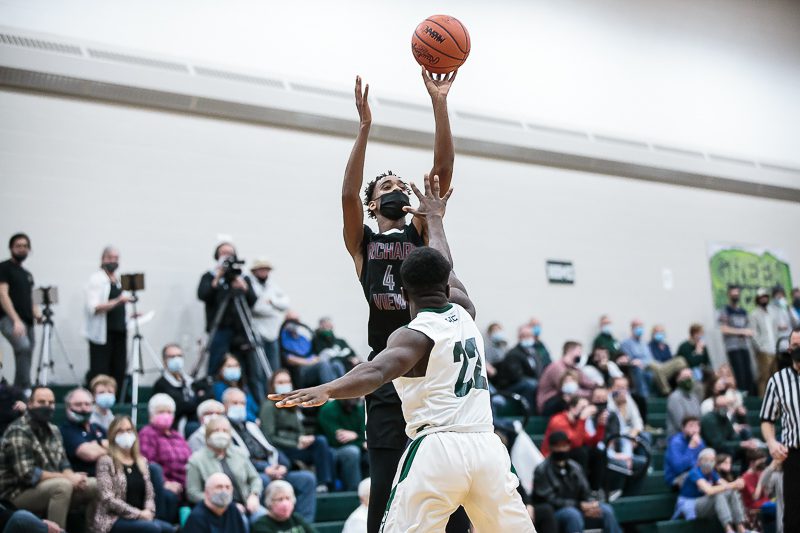 JayJay Tunstull goes up for a shot over WMC’s Joe Waller. Photo/Randy Riksen 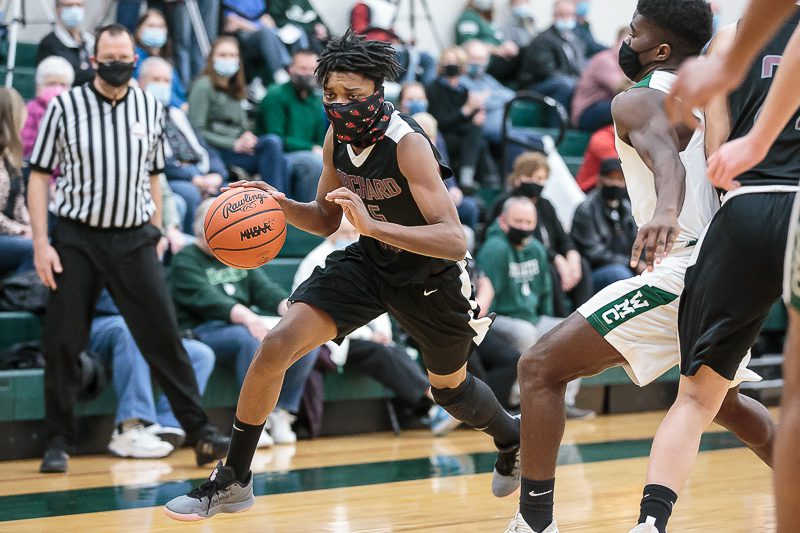 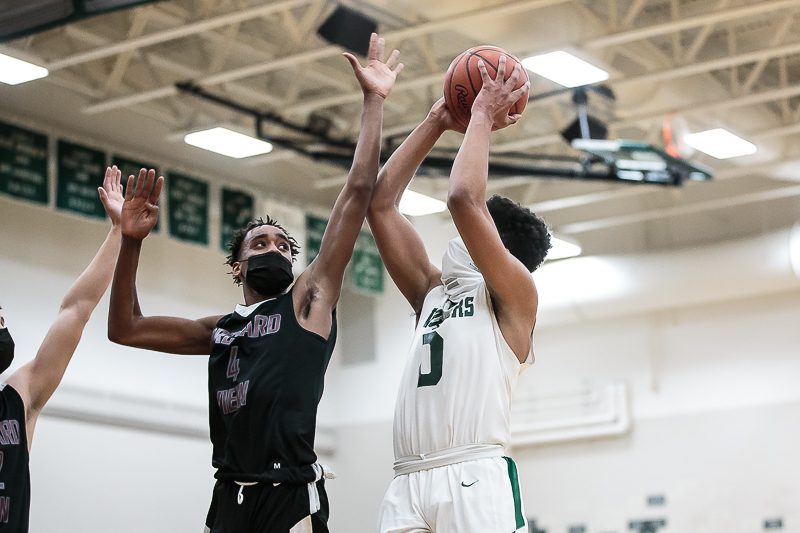 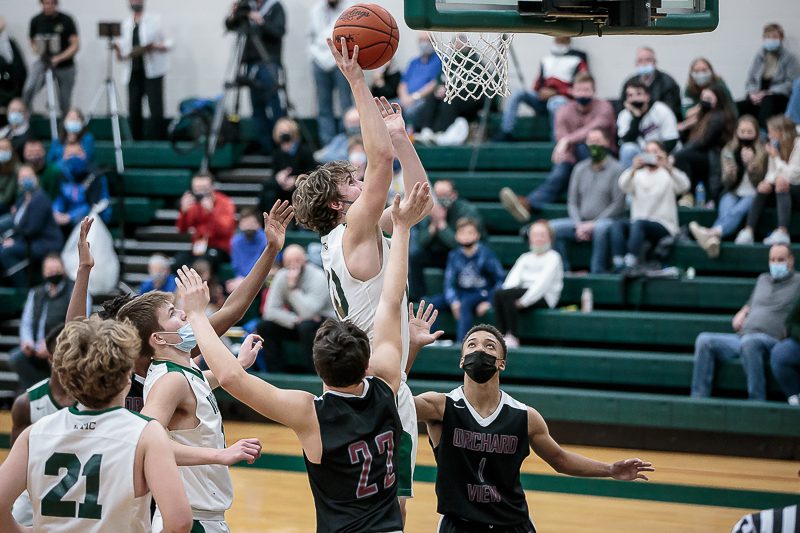 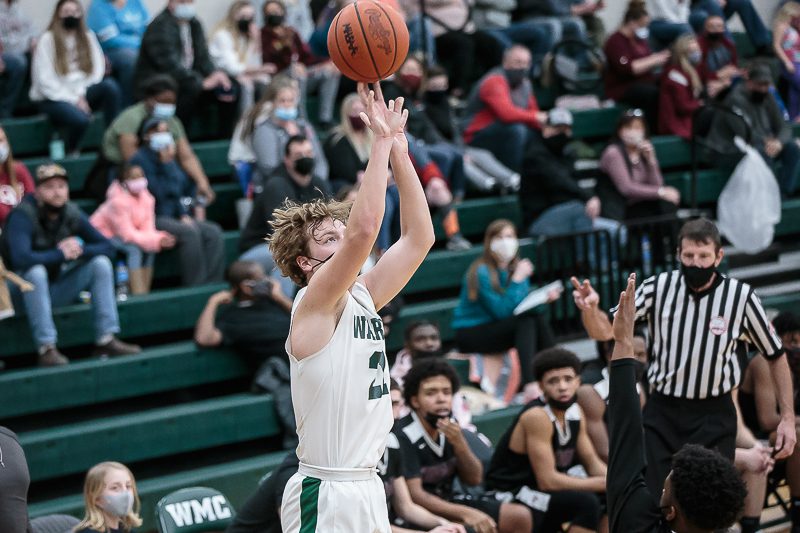 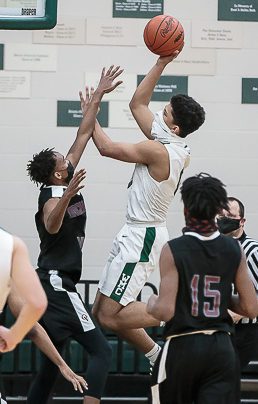 WMC’s Owen Varnado goes up for a shot in the paint. Photo/Randy Riksen 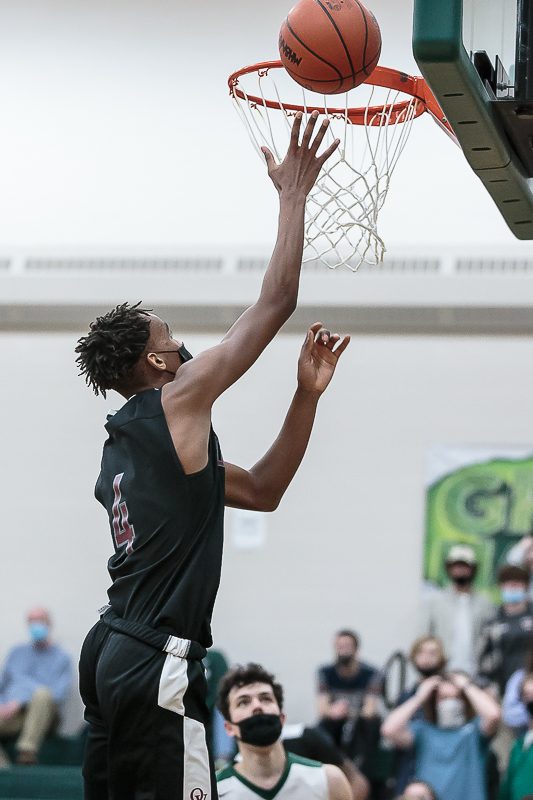 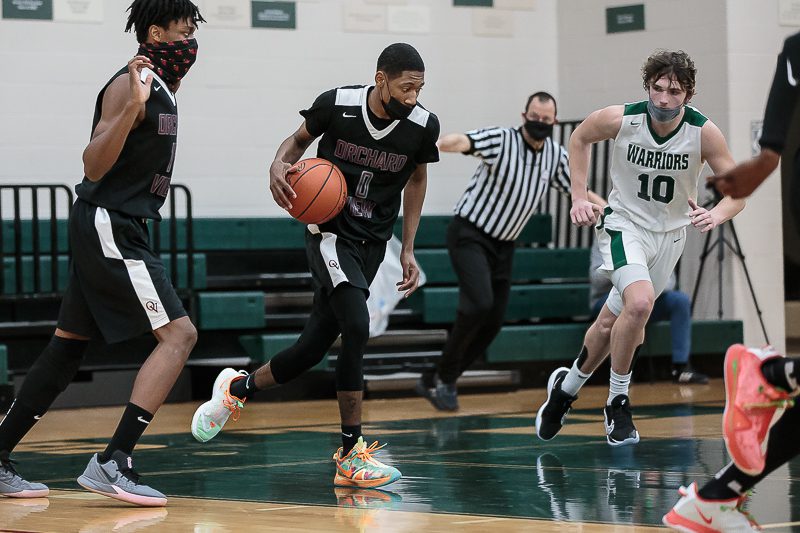 Ke’onto Barnes brings the ball up the court for OV. Photo/Randy Riksen 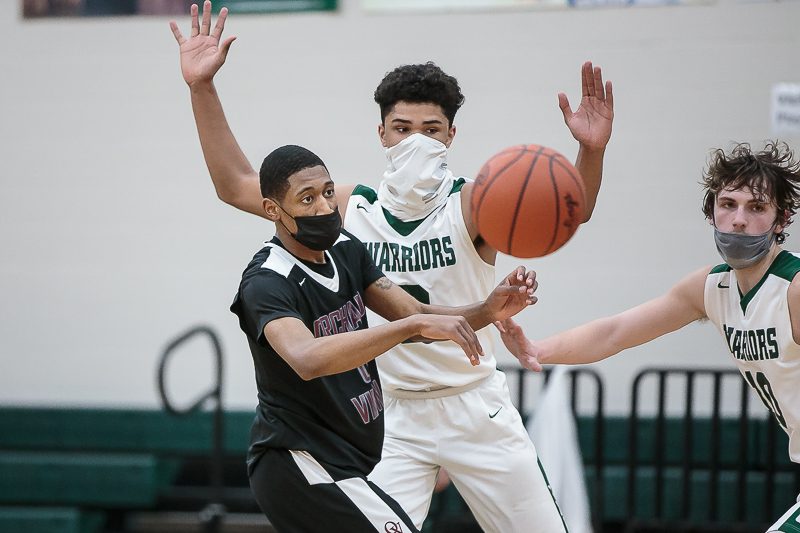 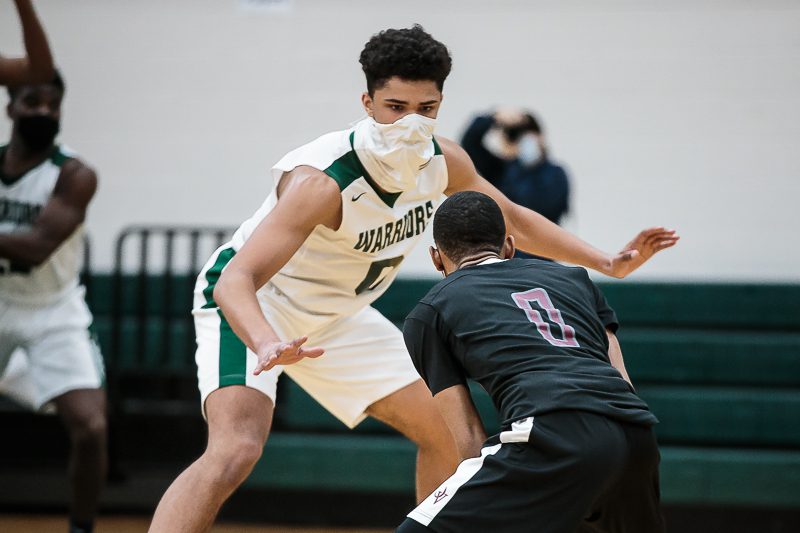 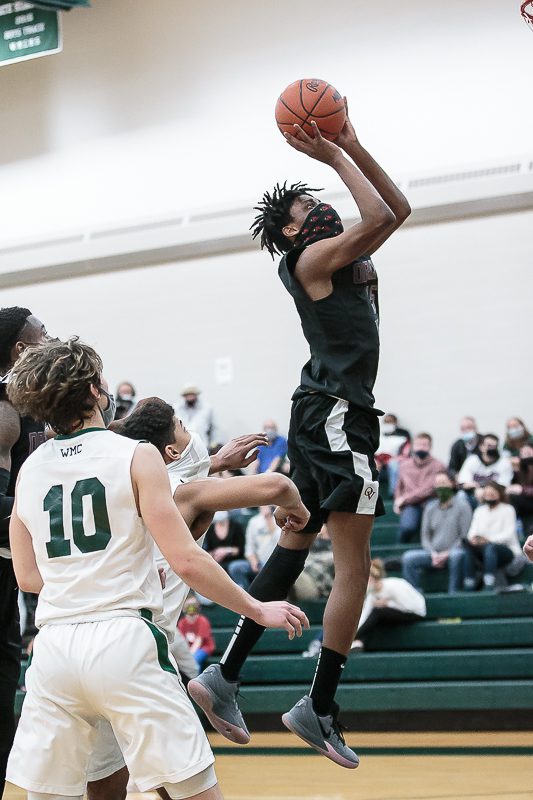 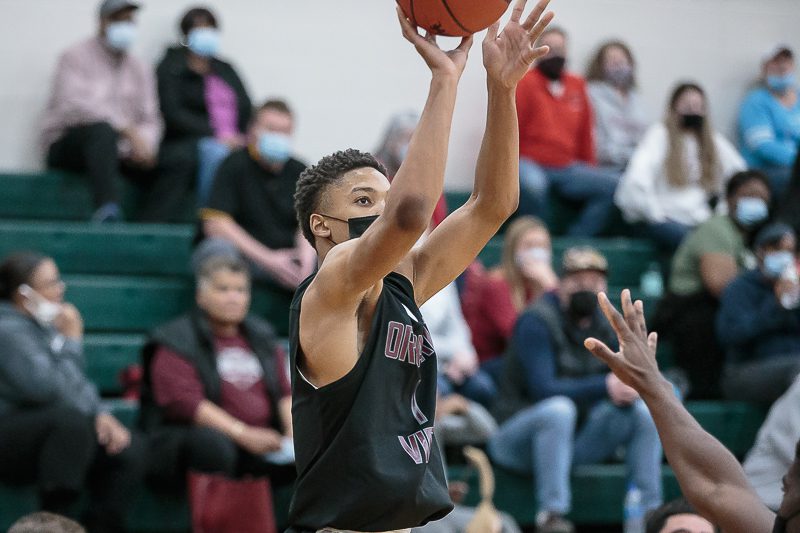 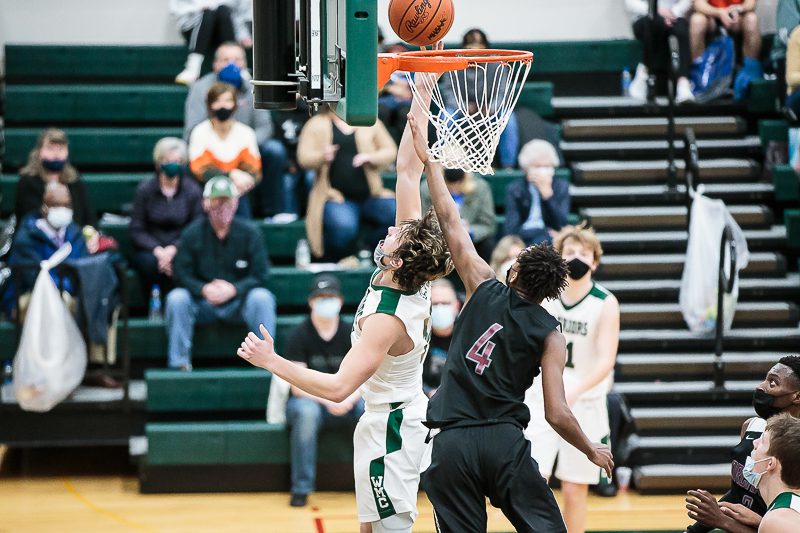 Fruitport prepares to induct its 2015 Hall of Fame class